The late 80s and well into the 90s marked a sea change in mountain bike design. Suddenly bikes that were designed to ride fire roads and trails with no real intention were being hurdled down mountains at breakneck speeds. Competition between the brands within the burgeoning sport was fierce, and the race to produce lightweight racing bikes had begun. Perhaps the most infamous of these experimentations is the Yeti C-26, and today, we have some juicy photos of Juli Furtado’s C-26 WC race machine with an entertaining account of this bike’s genesis by Mike Wilk… 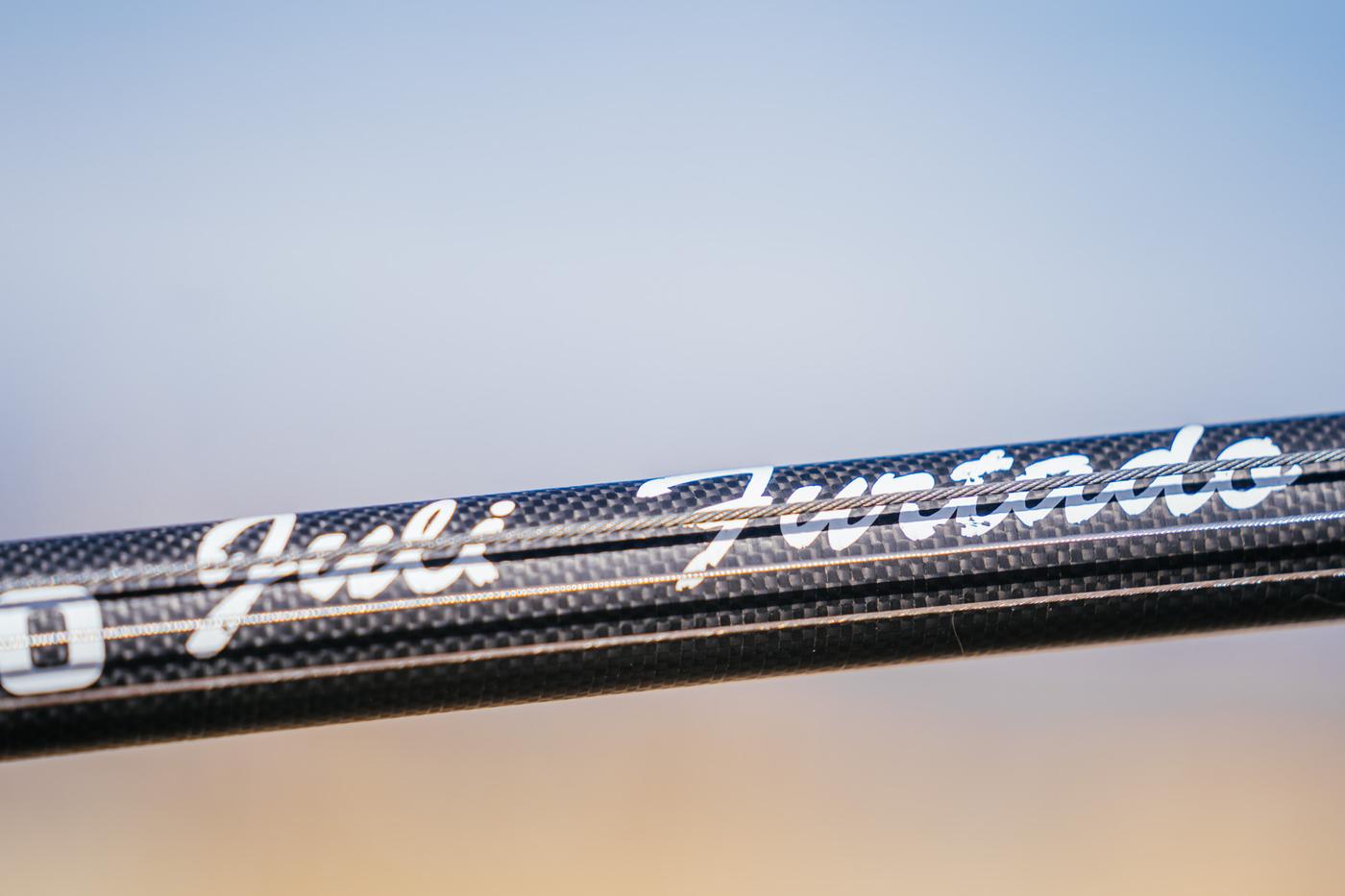 If there was one defining phrase, one singular utterance that sums up this bike and really the entire try and fail attitude of the early 90’s sketchy mountain bike technology explosion, it would have to be when Chris Herting told me, “we could have killed him.” The him being referenced was none other than John Tomac, Eli’s Dad, or less importantly, mountain biking’s first million-dollar man (at the time), and likely our sports greatest living hero. The bike Tomac raced at the 1990 Worlds in Purgatory had not graduated the prototype phase. 30-year hindsight tells us it shouldn’t even have been ridden to the corner store for zigzag papers. Herting knew it was unsafe yet everyone was full send on race day, because well, that was mountain bike racing in the early 90s.  Put finely tuned, high-level athletes on dangerous and untested equipment and see where the fail tolerances are. Only the fail tolerances for the Yeti C-26 were still back on the assembly table. 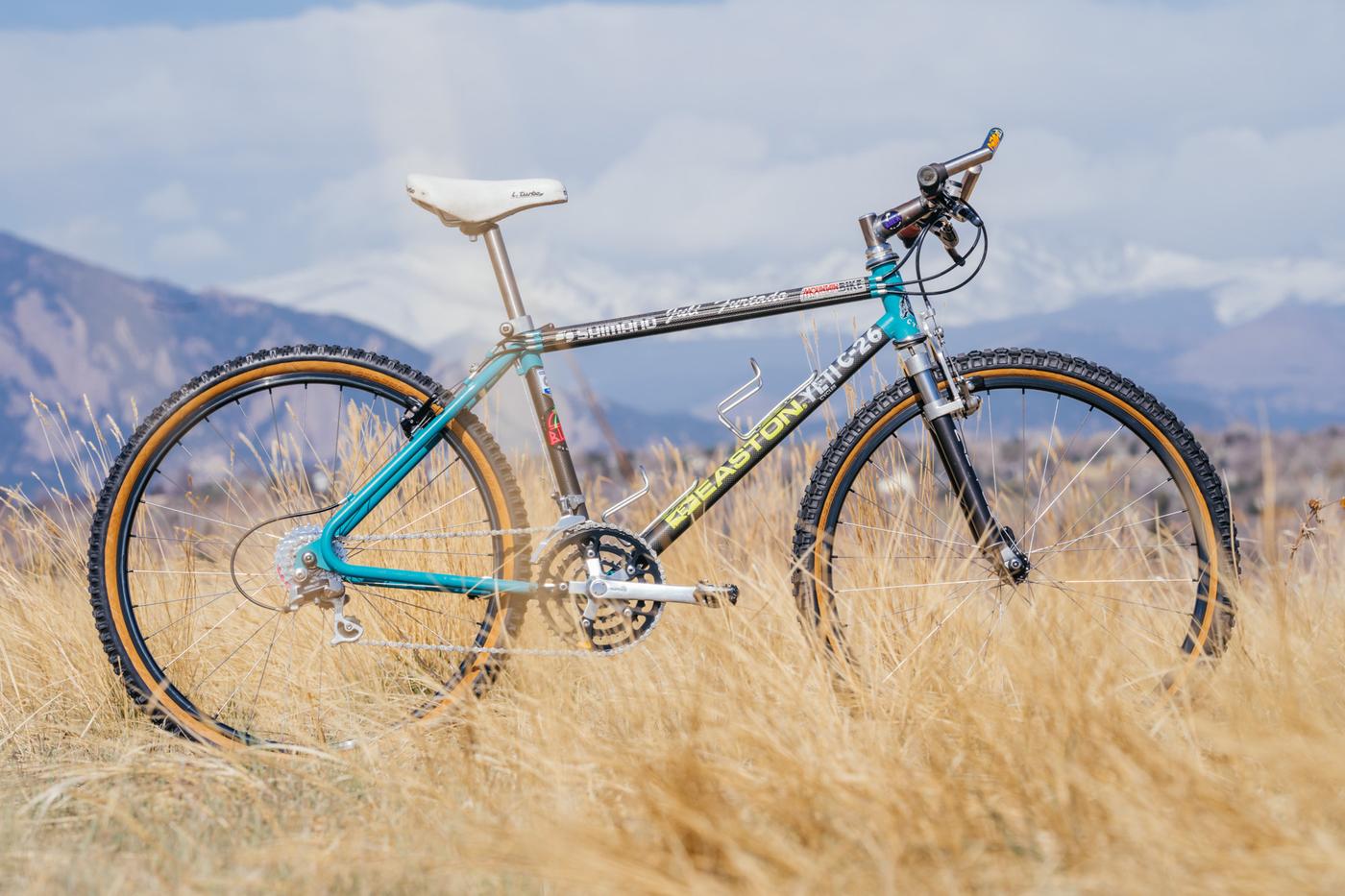 Mountain Bike Action wrote this about the prototype Yeti C-26 in June, 1989:

“The [Yeti and Easton Composites] union is one that not only represents the interests of both parties involved, but also every mountain bike enthusiast around the world who is yearning for what could possibly be one of the greatest performing mountain bikes ever made.“

I’ll talk more about “perfect unions” later, but I laugh every time I read this because Yeti and Easton didn’t split the atom here. “Alucarb,” or, carbon-wrapped aluminum sleeves, was the brainchild of Chuck Texiera of Easton Sports, who used versions of it in every tennis racquet or hockey stick they made.  Texiera said, “we could make a bike out of this stuff,” and they did, licensing the technology to Raleigh, who used it for their 1988 “Vision” line. 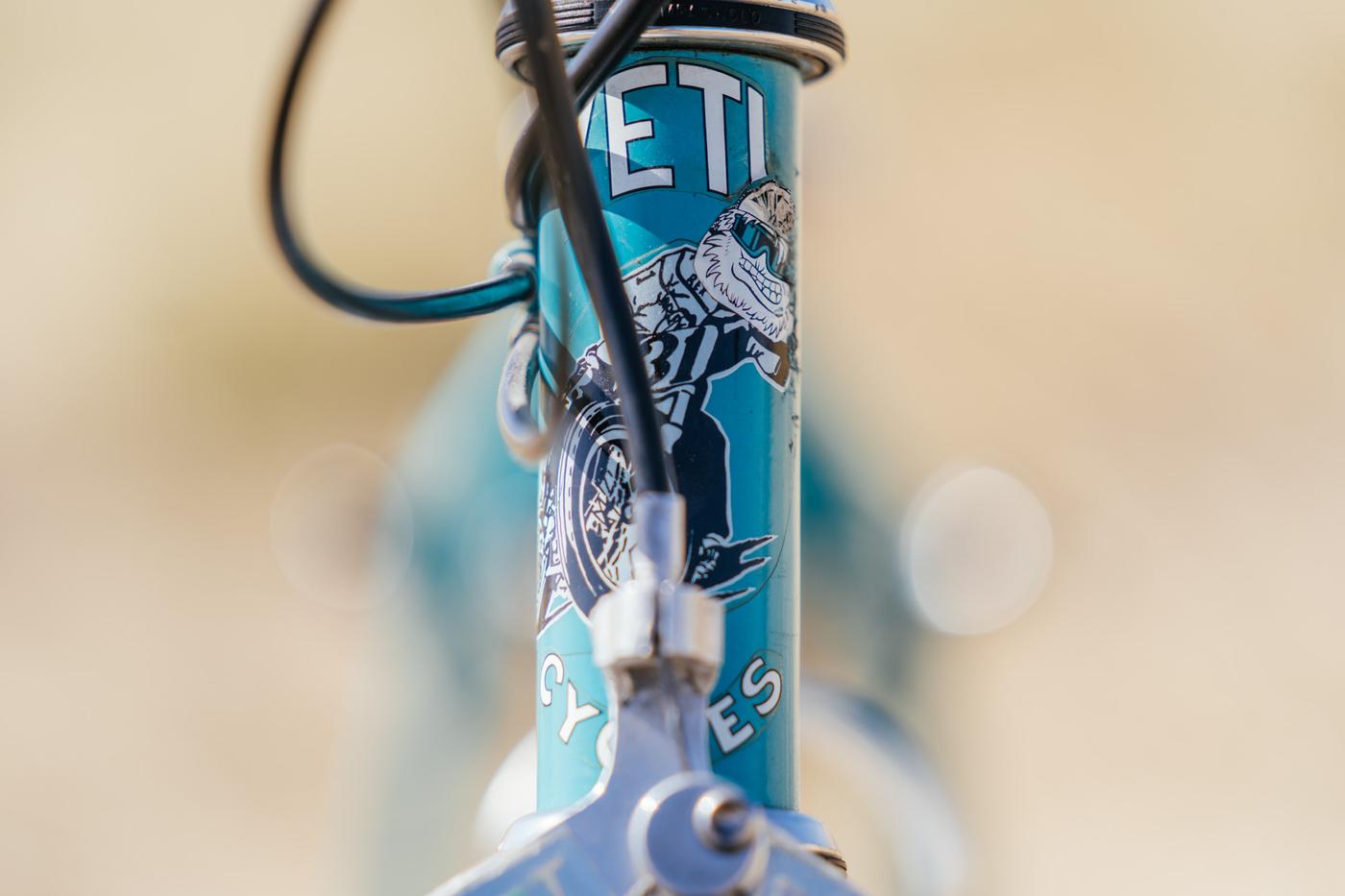 Over at Yeti Cycles, boss John Parker made no apologies about the weight of his bikes as he designed them to be “bombproof,” but partner Chris Herting saw no reason the Yeti race team should be forced to compete against riders on bikes three to five pounds lighter.  After the 1988 race season, Herting realized parts could be drilled out only so much before the risk of failure was too great, and he began seeking alternate ways to lighten the Yeti “For Racing Only” team frame. Once Teixeira suggested the carbon frames could be easier to manufacture, Parker gave Herting the green light to produce a prototype. They called it the Yeti C-26 for Chris’ initial and his age at the time.  The design was complicated but not revolutionary: The Easton “Alucarb” tubes would be mated to hand-machined steel lugs using a special 3M compound (Permabond 310), which would then be then cured in an oven. The classic steel BMX-style one-piece Yeti rear end would then be welded to the newly-formed, ultra-lightweight front triangle. The total weight savings = exactly one-half pound! 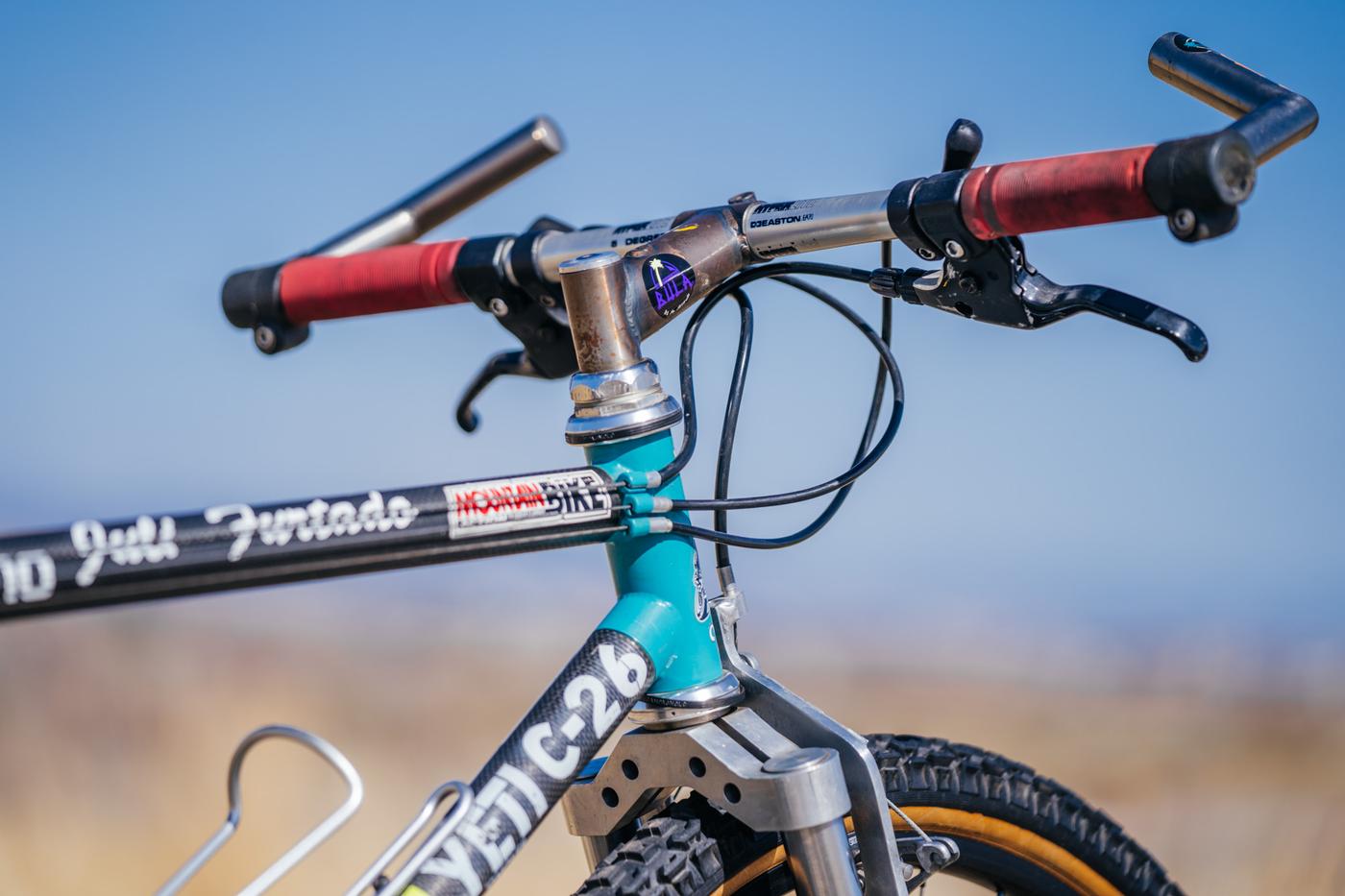 At some point in the process, like early on, Herting was full stop on this project. The lug tolerances given to him from Easton (rumored to have been written on a post-it) were what they were using in their million-dollar production facility.  Herting was doing this by hand on a lathe and it took three weeks to make the first bike.  Tubes would slide over the lugs and the glue would be pressed out.  After a few minutes, the compound would begin to harden, making minor adjustments impossible.  Mating the later joints would break the bonds set earlier, and so on. 20 years later, Herting considers building the first prototype one of the most challenging times in his career. However, MBA blew it up in their magazine calling it, “the future of mountain bikes,” so Parker and the Yeti marketing machine took it and ran. Yeti produced approximately 8 C-26s for the factory racers, and the team rode them throughout 1990. And then they started to break… 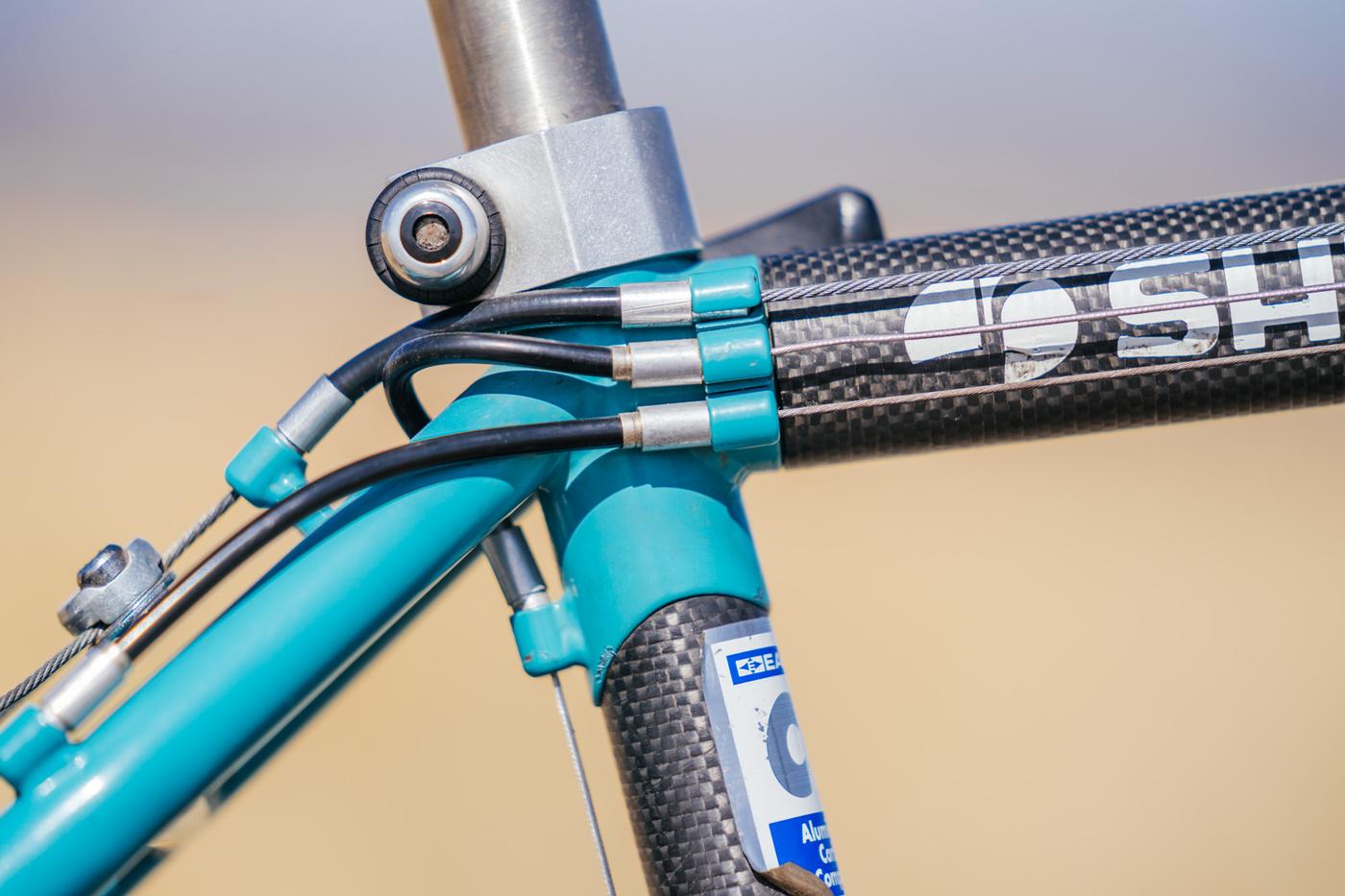 I want to revisit the term perfect union because it accurately describes Juli Furtado and Yeti Cycles in 1989.  Furtado’s career has been well-documented, so I won’t go into depth, but I highly recommend her episode of Payson Mcelveen’s The Adventure Stache podcast – episode is here.  In summary, Furtado won 1989 Elite road nationals on a borrowed bike wearing a t-shirt and Parker signed her to a handshake deal.  They were perfect for each other: the Bad News Bears of bike racing. Did she know how to ride a mountain bike? No, but she barely knew how to ride a road bike and she was already a national champion, so what could go wrong? 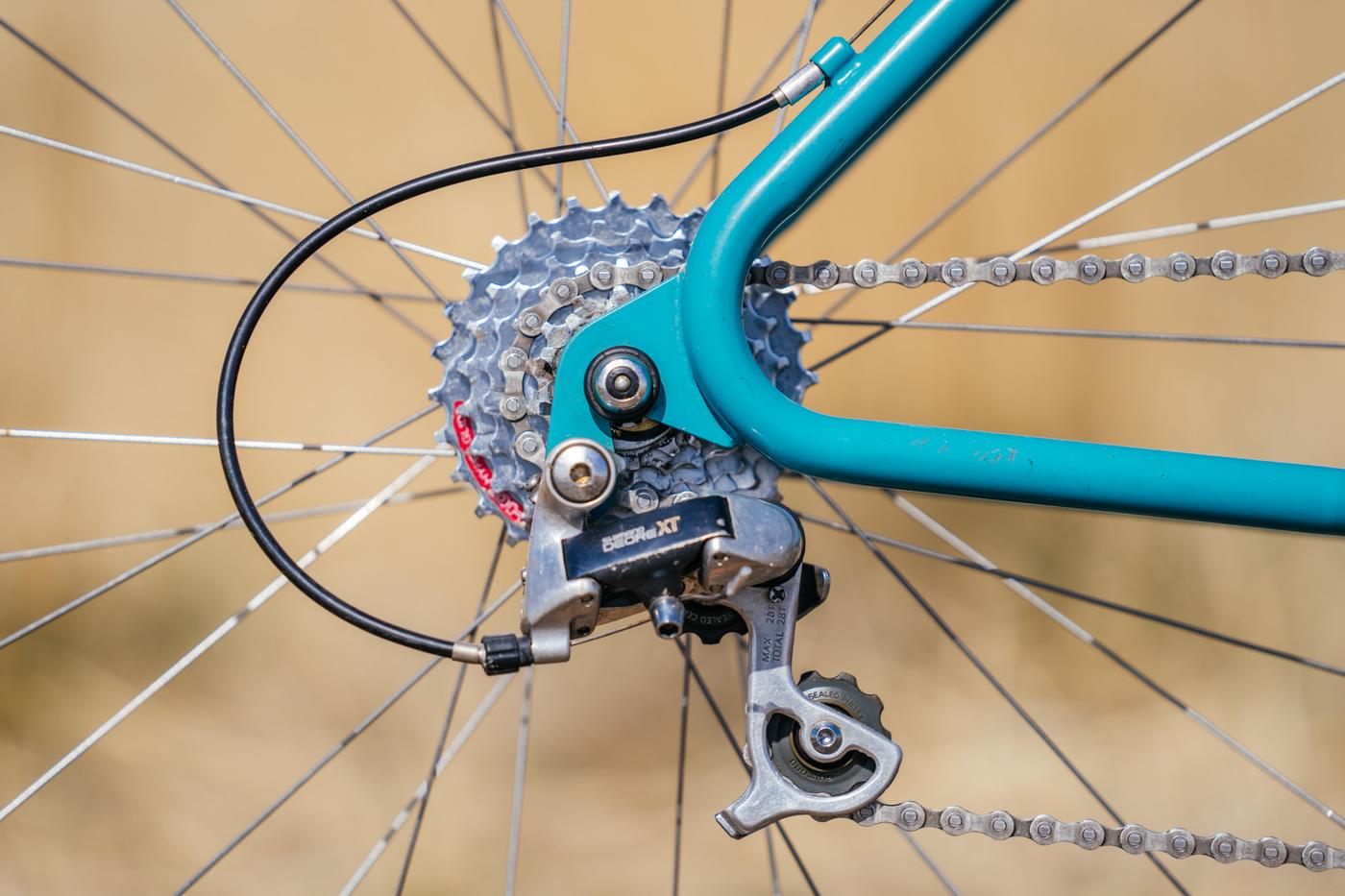 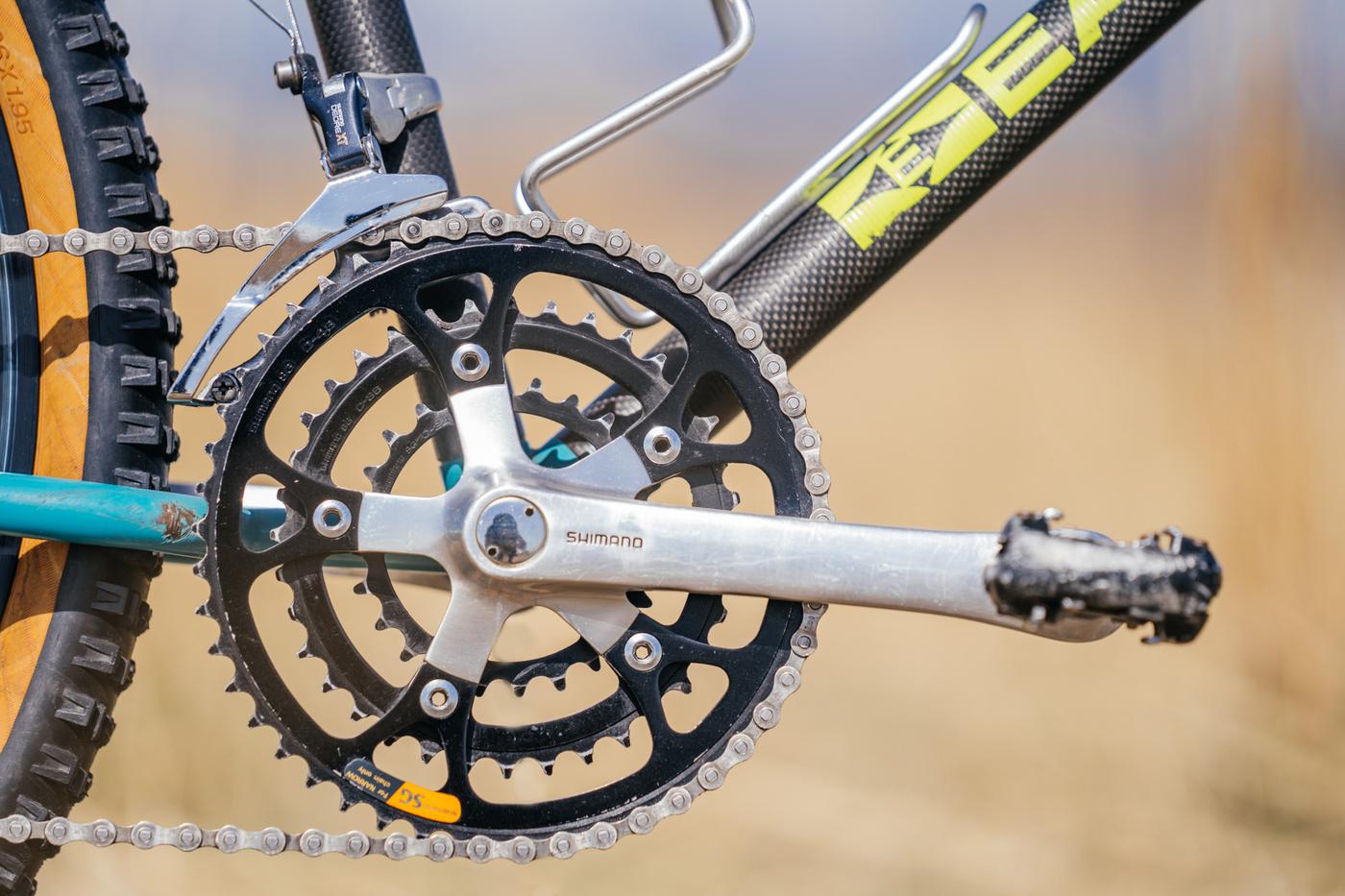 Speaking of things going wrong, Campagnolo had made a mountain bike groupset, and they needed someone to race on it.  Klein was on board as well as Fat Chance, and so was Parker.  I don’t know the dollar amount agreed, but many first-hand people with whom I’ve spoken all agree it was a lot.  And objectively, we can all agree that stuff did not work.  So throughout 1990, Juli Furtado rode on a custom-made Yeti FRO with full Campagnolo Euclid. I’ve owned and ridden this bike by the way, and it’s amazing. Minus the Campy, which absolutely did not work. Juli’s results were good enough to identify her as a potential podium threat, so in September 1990, Juli was given a Yeti C26 with full Campagnolo for the race. Let’s recap: We have a bike racer who could barely ride mountain bikes, aboard a bike glued together with hopes and dreams, relying on a parts group that wouldn’t shift or brake.  Really, what could go wrong?  I’ve heard four different versions of this story firsthand from four people directly involved, but things did go wrong.  The facts are this: the day before the race, Juli’s front derailleur would not shift up or down (kids, we used to have to do this).  Parker grabbed a full XT group from the Shimano guys and had every part swapped.  Juli won the race on Shimano despite Yeti being a Campy-sponsored team.  Parker was hailed as a hero, dollars rolled in, and Juli became the most successful World Cup female XC racer of all time.  The Campy reps were fired, and careers in the bike industry were ruined.

The reasons behind the now-infamous parts swap range from it being a devious premeditated move to rid themselves of inferior equipment to a desperate action as a result of a miscommunication regarding product specs (Campy’s front derailleur was not compatible with the 73mm bottom bracket shells the C26’s used). Regardless, The C26 was a world championship-winning bike, and Parker thanked God the entire way home to California that it didn’t break during the race. 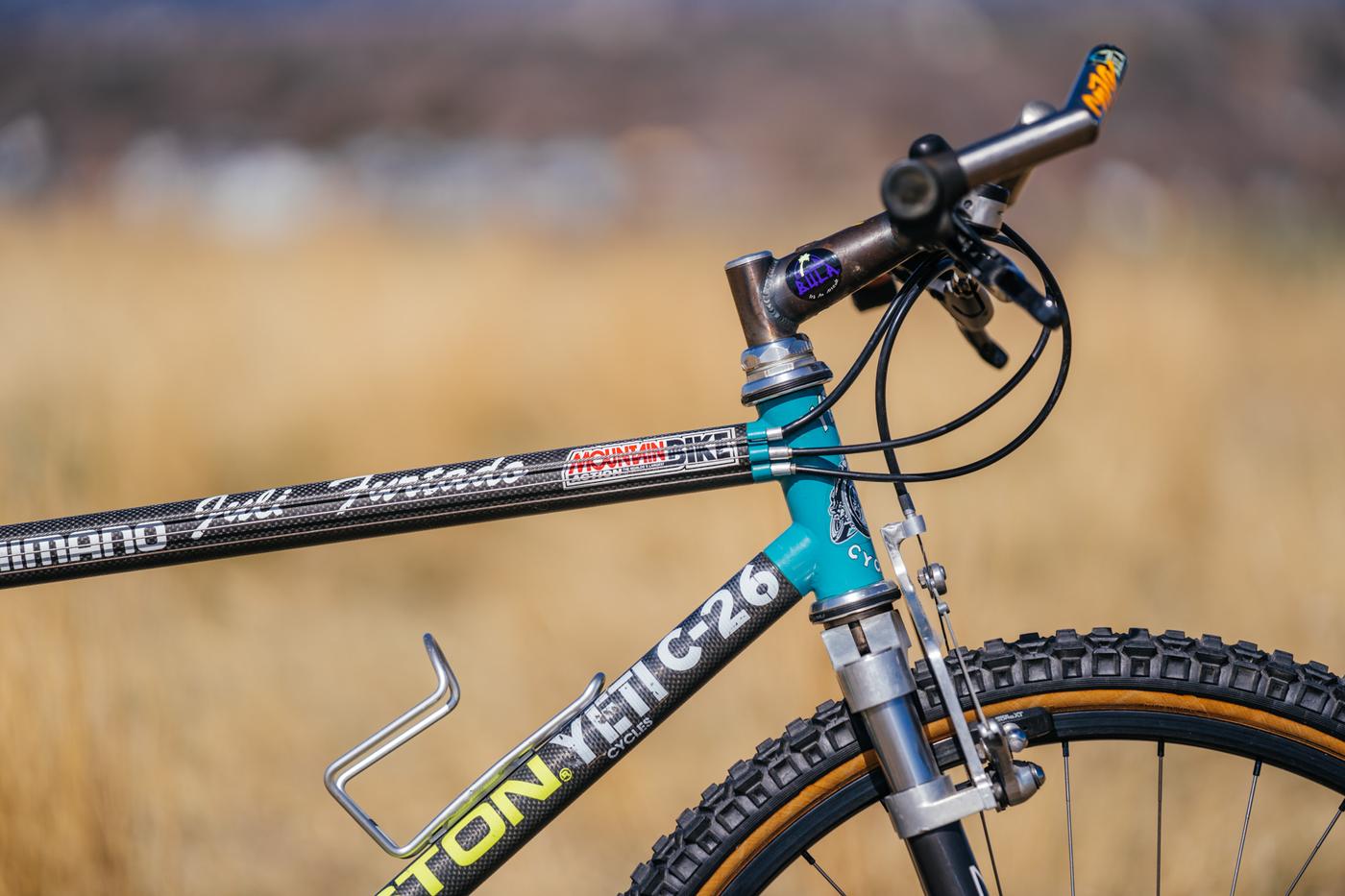 The C26 never made it into production.  Herting found his weight savings with the aluminum Yeti ARC, and the carbon bikes were put into mothball. Fifty C26 tubesets Yeti had requested from Easton were boxed and stored, eventually making their way to Durango, CO with the rest of the Yeti crew. In February 1999, Schwinn closed the Yeti plant in Durango, and the great dumpster dive of the past 30 years began. I’ve heard a set was made into a ladder for a bunk bed. In 2008, I was able to get my hands on a set of these tossed tubes and had Herting build a C26 for me, which kicked off a spree of replica C26s being made.  These range from actual bikes built by Herting from original tubes, “pirate” bikes riveted together, or regular FRO’s with “carbon” decals to simulate a C26.  Imitation is the sincerest form of flattery, right? Where the Bike Went

In 2002, strapped for cash, Parker sold Juli’s race-winning C26 on eBay.  Even then, the nascent online auction site netted Parker nearly $10k for the bike, and it went to live in a German basement for 25 years.  During that time, the vintage mountain bike community grew like wildfire, and the stories and lore of the Yeti C26 spread.  Whatever happened to Juli’s C26?  In 2017, the collector who had purchased it off eBay surfaced and contacted Nick Martin of the Pros Closet who had amassed a small but mighty collection on display in their Boulder, Colorado headquarters.  The terms of the sale were simple: Nick needed to find a 1957 Chevy Nomad and have it ready to drive cross country when the seller arrived at the Denver airport with the C26 in hand.  He absolutely would not ship it.  Incredibly, Nick pulled off the multi-faceted sale, and this iconic piece of MTB history now lives in the Pros Closet museum. 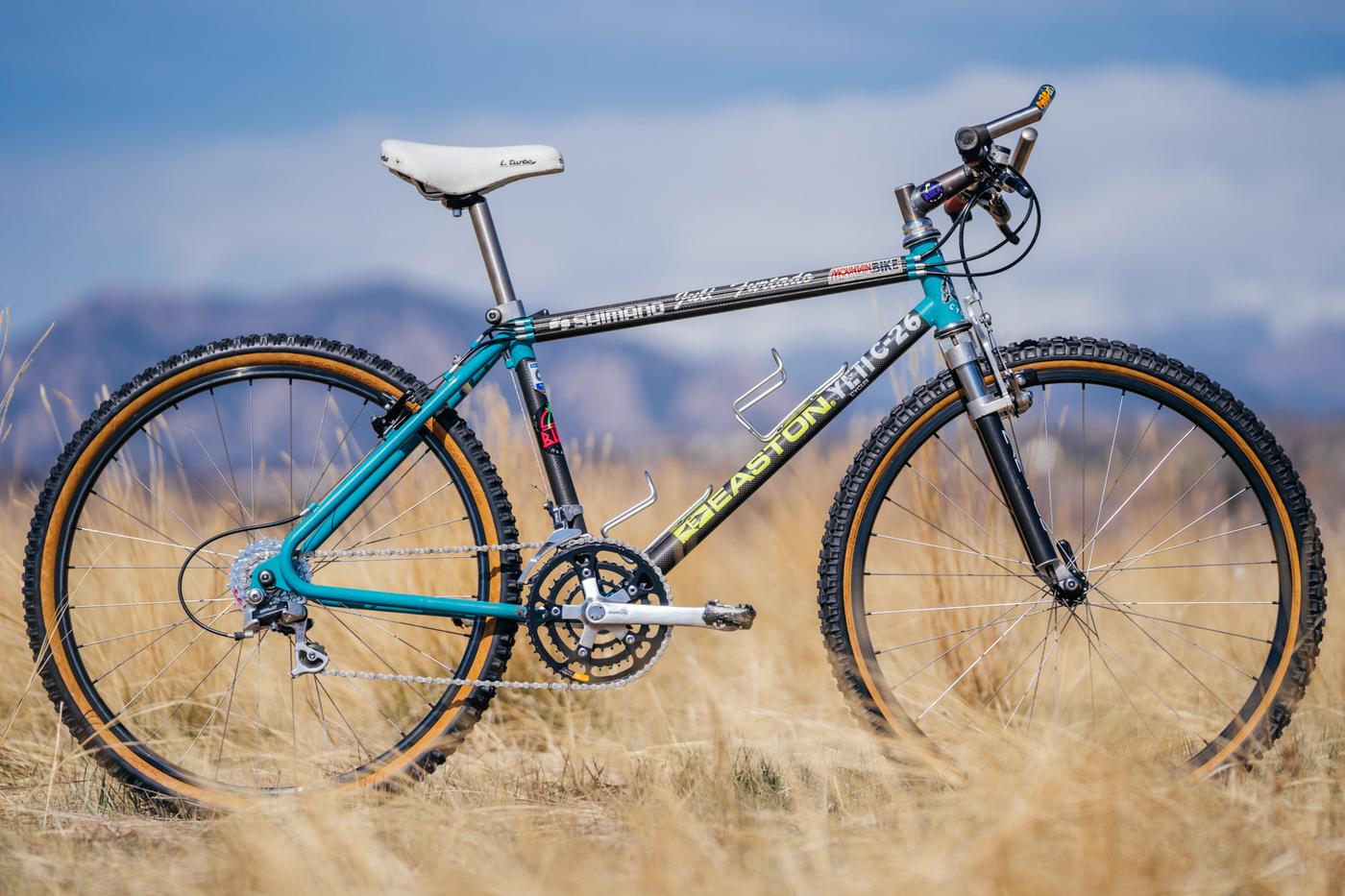