Fortunately, Thomas was on the same page and for the months that followed we planned out this unbelievable bike and trip. Our trip started at the Horse workshop in Brooklyn where we met up with Charles the shop cat and did some last minute adjustments to dial in the fit. Once the bike was ready we headed upstate for some quality gravel riding with Thomas and Horse customer turned good friend Nick.  We set out each day from Thomas’ cabin which is perched on a hilltop amongst the Catskill Mountains and got a good mix of pristine dirt to rowdy under maintained service roads covered in leaves. There was so much terrain I wish I had more time to explore but I will definitely be back! My parameters for this frame was that it had to clear 2.25” tires, shred single track but still be suitable for long days in the saddle. With that, Thomas took it and ran drawing up perfectly balanced geometry and a meticulously selected tubeset of Columbus Life and Zona.

The small details are what really make this bike special for me. From the s-bend flattened seatstays to the custom machined headtube reinforcements to the hand stamped brass badge on the BB, these are what truly make this bike one of a kind and are a testament to Thomas’ craft. Once I found out the fork would clear a 27.5 x 2.25” Tire I knew we had to match the rear end but that was easier said than done. Luckily Max at 333 Fab paved the way with his Air Land Sea Frame so we took a page out of his book and utilized the White Industries Road Crank Arms with their Mountain spindle. This allowed for massive tire clearances and proper chainline while keeping the Q factor at a respectable 163.5mm. I wanted to pay homage to one of my favorite builders and possibly the most inspiring bike of all time, the Fastboy Assless.  Most readers of this site are familiar with Ezra Caldwell and the story of the Assless bike but for those of you that aren’t, The Assless was a frame that Ezra made for himself so that he could continue to ride while battling cancer. His craft and his story have continued to resonate and inspire me and I am honored to share this truly special paint with him. Ezra passed away in 2014 but lives on through his art and his story.

For more on Ezra check out the video below.

Made by Hand / No 5 The Bike Maker 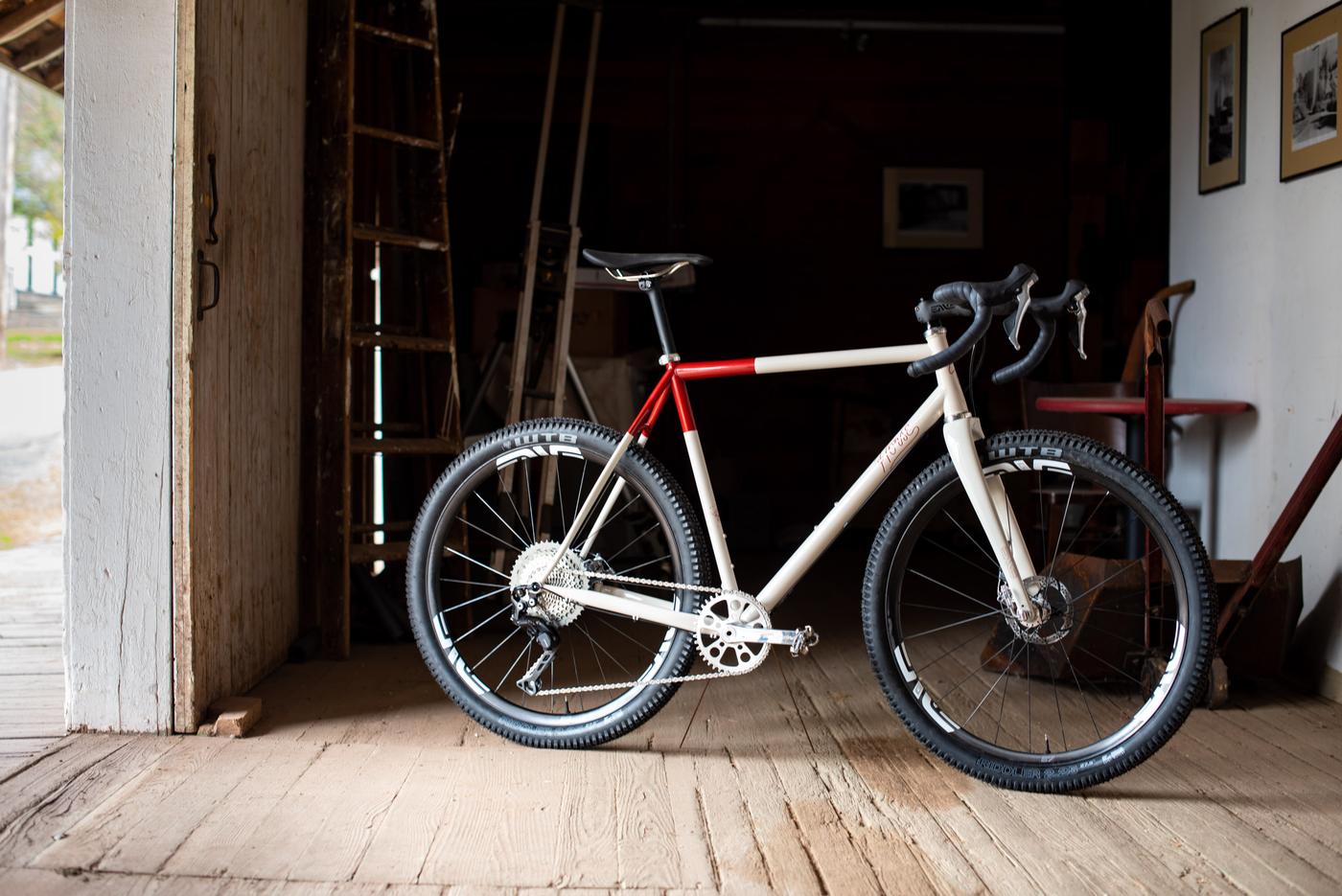 With the Frame being built around the White industries Crank it was a perfect opportunity to deck the rest of the bike out with their quality parts. The Polished headset and T47 BB and CLD Hubs laced to ENVE G27 Hoops really round out the build.  Paul Flat Mount Klamper provide the stopping power and match up nicely with the Set n Forget Thru Axles. I really prefer Shimano levers and have had great luck with the Wolftooth TanPan so I stuck with a 105/XT set up with a monster 11-47 Cassette.  The WTB Riddlers are a favorite in 700 and they are even better in 27.5! Fabric Scoop Saddle and ESI Wrap for the touchpoints. ENVE Stem and Post and last but not least the new Gravel Fork and Gravel Bar which really allow this bike to be what it is. A singletrack shredding machine.

Huge thanks Ian for the flawless photos, Nick for the great company and to Thomas for the making such an incredible machine, the accommodations, the beers, the good conversation and the reintroduction to Bob Ross.