Reno is a shit hole. This is the unsolicited and resounding opinion given to me by friends and strangers alike in the months leading up to this year’s Cyclocross Nationals in Reno, Nevada. More or less, the transaction would play out like this. Other People: Are you going to race through to Nats? Me: Yes. Other People: Cool. Reno is a shit hole. See you there. Me: Vague staring, plus some blinking. Like the volunteered opinions of most folks, I found the purported shittiness of Reno to be altogether untrue. Reno is gritty, yeah. But just because gritty rhymes with shitty doesn’t mean the two are synonymous or even interchangeable. Of course, there’s the fact that I’m just drawn to gritty things, to slightly off-kilter people and places. And so, therefore, I do not inherently equate gritty with shitty.

Regardless of your adjectival proclivity, Reno is what it is. A location ripe with off-centeredness. Pedal-less than a minute from Rancho San Rafael Park, the swath of dry dinosaur land where we hedged in a week of championship cyclocross races, and you’ll come across what I’m talking about. You saw it, you experienced it. C’mon, you know you did.

The strung-out junkie fixated on the shredded garbage bag gripped by his own fist, its soft, black tentacles revealing the direction of a strong wind. The grey-haired woman out for her morning walk, in fleece earmuffs and a button-down fleece coat and grey sweatpants with elastic ankles, who insists on telling you that she always hears the train but never gets to see it. Her cocked head asking, do you think it exists? The endless rows of casino flash-and-blink. And beyond them the sound of slick coins and slots and chips, of card slapping and dirty money and despair. The errant gunshot in the hazy hotel lobby, its marbled entryway buffed with nicotine and sin.
Now, I’m not promoting these aberrant things. Or even saying that I like them. This isn’t about like or dislike. It’s about what exists, whether we want it to or not. And it’s about experiencing what exists as it is. Even and especially if that makes us uncomfortable. The Addict. The vices. The sweet woman hunting far-off trains with a wobble of dementia in her eye. Every one of these things is an undeniable piece of the Reno experience. And to deny them is to deny Reno. Just as much as deducing Reno to shit- hole status (because of these things) is, in my own honest and unsolicited opinion, to miss the mark entirely.

Reno is dynamic. While I don’t live there, and while I admittedly only brushed up against the tip of its iceberg as an awkward bike racer passing through, I could tell it has character. Anyone can. The place has a realness to it and it’s fucking handsome and come to think of it, yeah, I’d do Reno. For real, its trails seem to stretch out and into forever from the edges of its neon nexus, undulating through a surrounding accretion of semi-arid peaks and valleys and ridgelines. A confident river gets into bed with the city itself, lays its shapely length down next to concrete, timber, and green space. It’s one juxtaposition after another after another.
And maybe this is what I’m getting at: be wary of blanket statements. Because whether place, person or thing, there’s almost always more than one story. Use your own travels and your own experiences, not someone else’s, to gauge what is shitty and what isn’t. And always (always) remember to leave a little wiggle room for adjustments.

As for the scene at Cyclocross Nationals, that was pretty damn cool too. The course and its sidelines were packed with real live Reno-ites and enthusiastic batches of west-coast baked ‘crossers and fans. There was also a fine dusting of east coasters, plenty of Coloradans, and loads of caffeinated others from everywhere else in between. All of which is to say that the spectator game was on par, in terms of strength and quality and execution, with the racing itself. And that means a lot in the ‘cross world. Without dollar bill hand-ups and half-naked fans, who are we? One of the most bitching elements of the ‘Cross Nats landscape was the DJ (apparently a staple of NorCal CX) spinning vinyl beats at the sand pit. Since like forever, I have wanted ‘cross races to offer soundtracks that knew a thing or two about dropping it like it’s hot. That is, I have always wanted legit fucking hip hop and reggae and punk and… Black Sabbath to pump through the sound systems at ‘cross races everywhere. Not shitty classic rock or someone’s lame playlist that they think is cool but no one else does. Think hip hop has too much profanity for your virginal-eared kiddos? You’re probably right, but there are clean versions of every song on the planet, so indulge me. Please. The DJ at this year’s Resolution CX in Dallas, TX did (thank you!)

So yeah, the sand-pit DJ at Nats KILLED IT. I mean, after flatting on lap two and hopping back into the hindquarters of the game two pit exchanges later, it was a mighty powerful thing to hear the opening notes to Tupac’s California Love while body-englishing through the very last sandpit of the CX season. No, it didn’t make me win. Nor go any faster, really. But it did infuse a bounce into my body for at least thirty seconds thereafter. And it did make me smile. Nice work, DJ.

Aight. Now that you’re fully saturated with a bunch of run-on sentences detailing my point of view, I’m going to leave you with a parting gift that further extends and expands into the many stories of who we are and where we roam. Below you’ll find a small bouquet of solicited opinions (about Cyclocross Nationals in Reno), mostly from individuals whom I generally respect and/or love as humans in this world.

Um. So take it away, y’all? No really, take the fucking mic before I say something you regret. 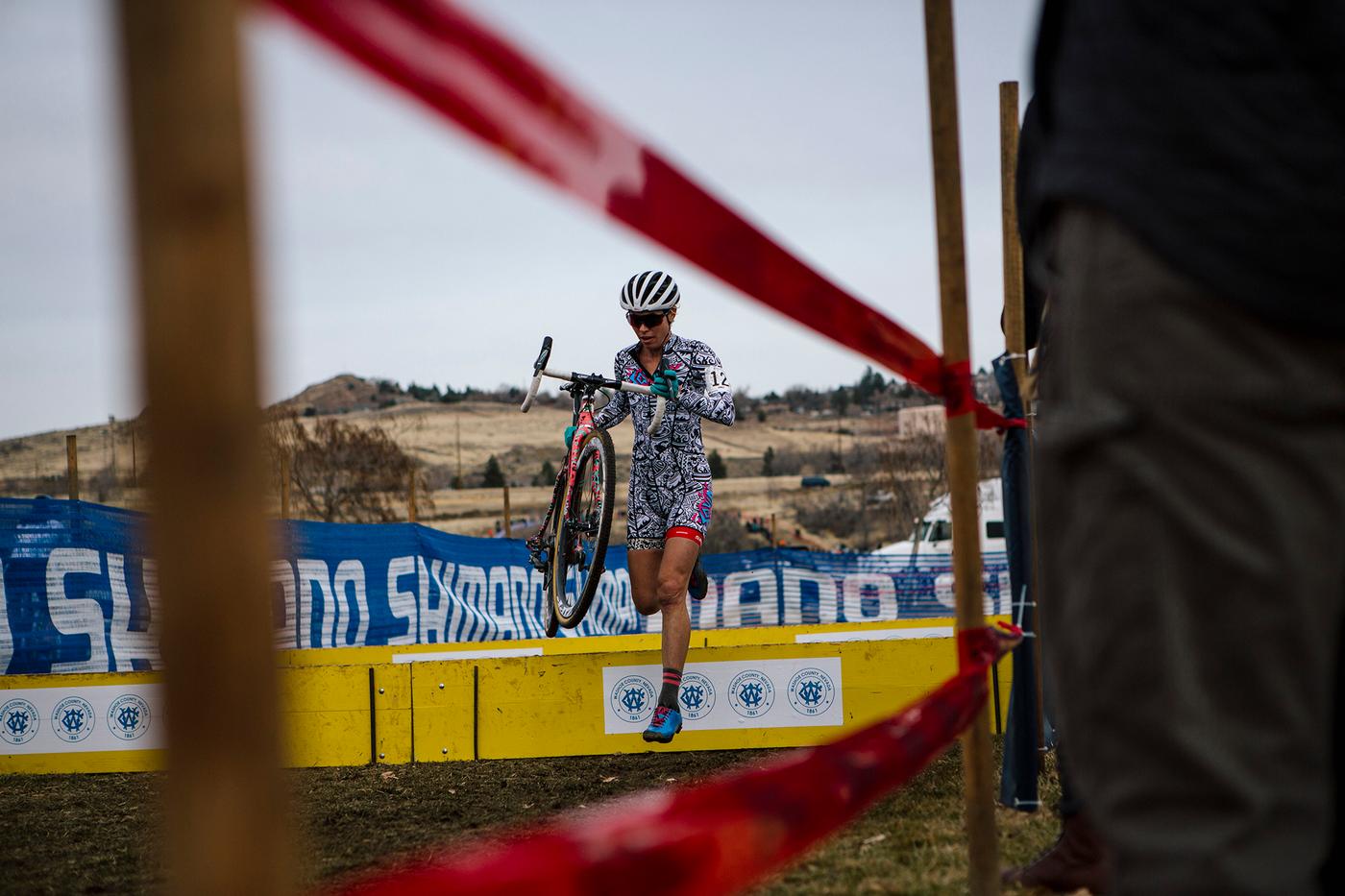 “[Reno Nats] felt like a family vacation, a camping trip—remote but intimate…[And] the course, it felt much like Reno itself. Long and narrow, fast—a daisy-chain of features, distinct stops along the highway.” -Erik Tonkin, Lead Stallion for Team S&M
“The biggest race of the year for our lovable little sport, in the Biggest Little City. Seediness and all, it couldn’t have been more perfect.” – Emily Kachorek, Squid Squid Squid SQUID “We have such a good group of people who come to these races, riders and spectators [included]. [At Reno Nats], it felt like the venue was massive, but the course was packed all around… I loved the DJ playing music at the sand pit and the crowd dancing… The venue sat in the shadows of huge mountains… and the people were friendly. It felt like a place where you could relax and probably have a little fun. [And] we did, on Sunday night at a bar with a DJ spinning tunes like the Wild West that is Reno. [The] doors were wide open to the street and it was just music booming off the walls of the surrounding buildings… no one cared at all… the CX crew came out and we tore it up, [capping] off an excellent weekend.” -Jeremy Powers, Aspire Racing, duh

“Somewhere on an eastern slope of the Sierra Nevada Mountains, I raced my cyclocross bike in circles as hard as I could. The West Coast contingency of this small bike community was out in full force and I harnessed the energy of family and friends to my best and most proud Nationals finish to date. There’s nothing quite like going all in at 4500 ft. with the mountains in the background and all your favorite people screaming at you. [Thanks to these elements, I was able] to focus and execute my best race ever.” – Amanda Nauman, badass Panda for SDG – Muscle Monster… who will definitely rip your legs off if given the chance

“Reno’s CX Nationals was my first time at Nats without racing. Although I didn’t feel like I missed being out on the course, I did reconnect with the energy and stoke of the CX scene, and that was awesome. I get butterflies in my stomach even now, just sitting here thinking about it.” – Barry Wicks, BAMF for Kona, Big Smiles, and Big Hair everywhere “Reno and its CX are battle-born: constant 40 mph wind, the Sierras, tarantulas, heroin, hookers… this makes for [a] genuine stoke and appreciation for CX (and its related fun times) in Reno… It’s beautiful.” – Solana Kline (The lady in gold and pinstripe who handed out 2,000 flyers and got a buttload of people to dance and sweat and get down with one extremely passionate DJ in one dark and steamy post-Nats location. Yeah, that was the best post-Nats party everrrrrr.)

“Cyclocross Nationals in Reno… was about growth—forward motion. It’s not a race of convenience. There’s a required mental/emotional expense that makes this race special. In the same [vein], watching the racers, [their] sense of desire and relief, [it’s] palpable.” -Patrick Means, Grinning Capturer of emotive photographs everywhere “I rode the venue each day, I found a nice bakery, my race was hard, people seemed sincerely happy for me that I won, I was shocked I pulled it off, and I missed my kid the whole time.” – Adam Myerson, CX Staple, Sweetheart, and Awesome New Dad