The Ibis Ripley AF is an aluminum version of the very popular Ripley (carbon) model, with the exception of a slightly slacker head tube. It seems that the Ripley has been a pretty damn popular model for Ibis, so why not adjust for yearly geometry inflation (moar slacker!) and make it more affordable at the same time? Seems like a winning concoction to me.

For those of you here for a quick review: the Ripley AF is really fun and a great deal. Its few drawbacks are minuscule enough to be overlooked. Go have your second cup of coffee and see what part of society is falling apart today. Then, if you’re still here for the long haul, let’s dip our toes into the ever-fleeting world of this “down-country, enduro-lite, extreme gravel, or whatever the industry’s buzzword is this week” bike. 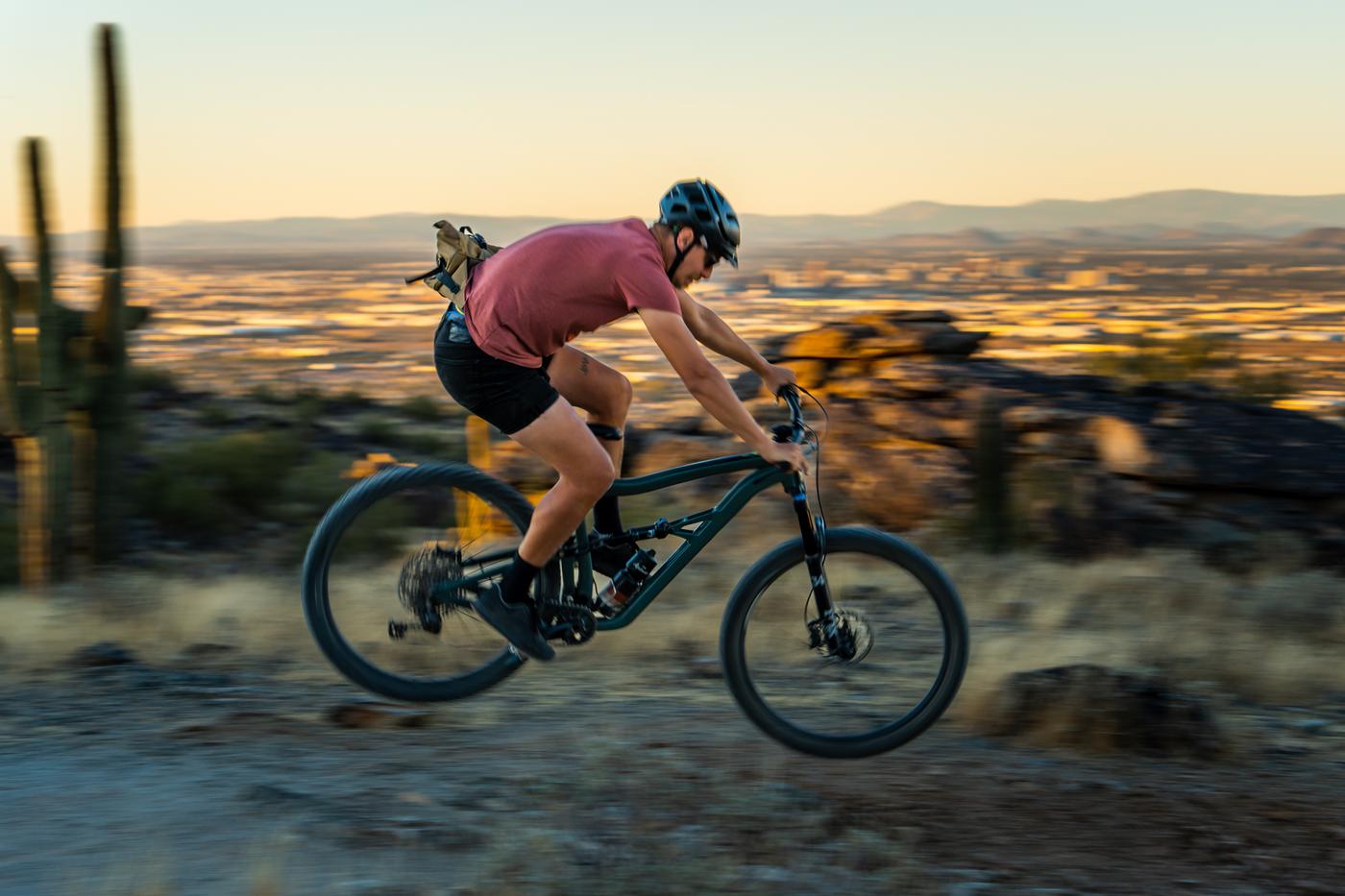 To start with, the Ripley AF seems to fall into what the bike world is calling down-country that, as far as I can tell, is just an XC bike with slightly longer travel and maybe more slack geometry. For what it’s worth, this bike has the feel of an enduro bike with shorter travel, rather than a slacked-out XC bike. It sports a 130mm fork and 120mm DW link rear travel which – at first glance – seems quite minimal these days. But, I’m here to talk about why it feels so darn comfortable and familiar.

Many people interested in this bike are likely starting to outgrow their hardtails and are ready to take the next step of bike evolution: full squish. When you throw your leg over the Ripley AF and start shredding (no, hammering) the ride quality will feel instantly familiar to hardtails with 120-130mm travel. The biggest difference is the head tube angle which, depending on where you are coming, from will probably be a bit more slack than you are accustomed to (except Chromag riders).  The geometry and component spec of the Ripley AF isn’t avant-garde, thus leading it to have an initial impression that is humble and comforting.  The jump from hardtail to full suspension feels more like a gentle hop than a leap on the Ripley AF. 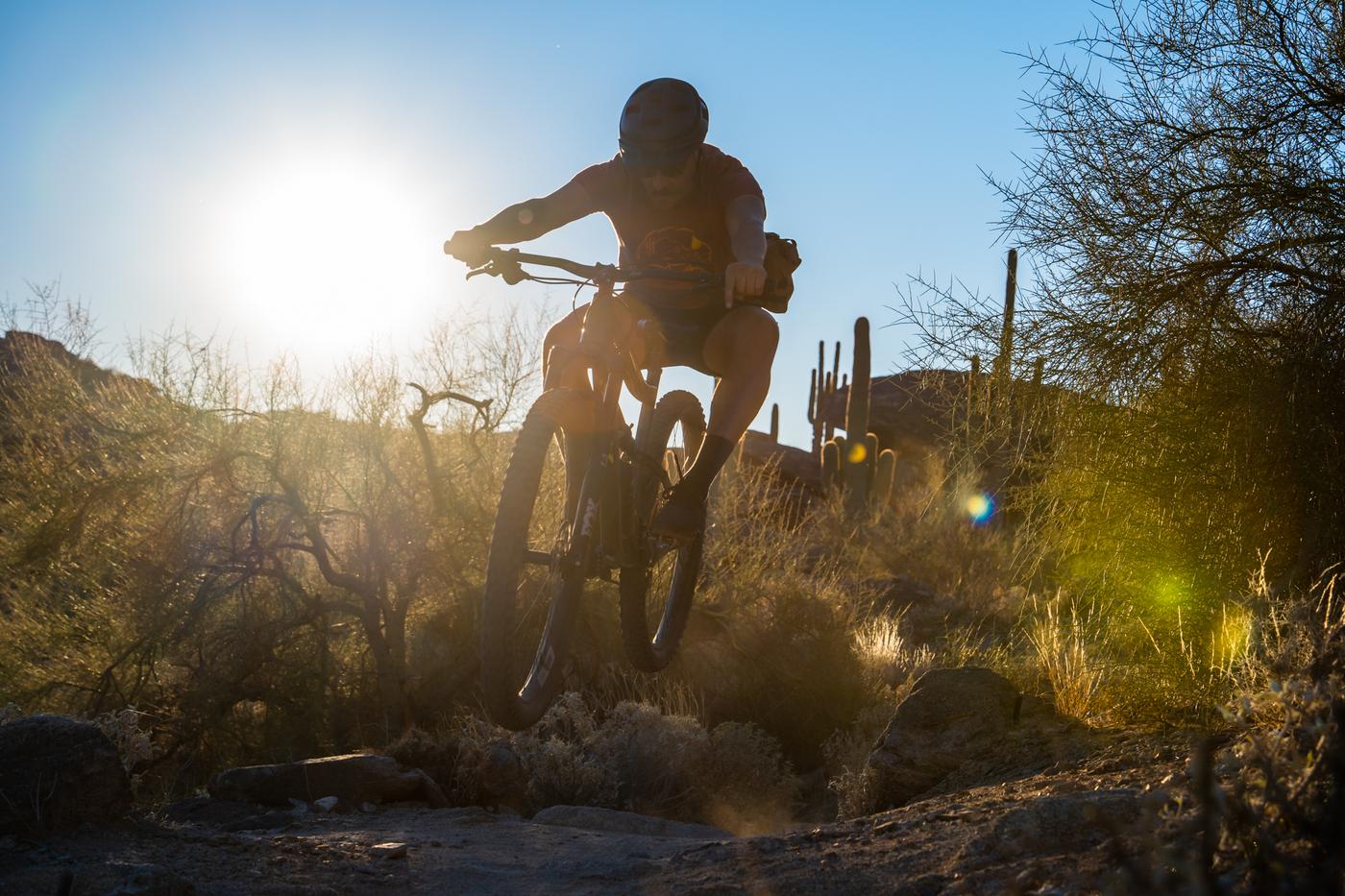 I’ll assume you haven’t come to read about a full-suspension bike’s similarities to your clapped-out hardtail from 2017. You wanna hear about how the rear triangle goes up and down and makes things smooth.  At 120mm travel, this is far from a “just send it” bike.  I’ve always heard of full-suspension bikes being referred to as “magic carpet rides” for how they smooth out the trail.  When I ride the Ripley AF, I feel encouraged to try those jib and drops that I’m usually just scared of casing my rear tire and being bucked over the bars. It doesn’t instill a sense of trail immortality, but rather adds a substantial margin of error for my sloppy riding. Go ahead and case that rock, don’t pull up quite enough on that drop, and just give your butt a break from all the damn rocks.

Southern Arizona is rocky, like really rocky, I don’t think any bike could smooth it out. The Ripley AF has made my local spins much more enjoyable and reduced my fatigue. Throughout my time riding this bike I found the bottom of my fork travel much more often than the rear shock.  The travel is far from endless feeling, but was there when I needed it and ramped up to prevent a harsh bottom out.  I hear that Dave Wiegle guy knows a thing or two about suspension and this seems to hold true for the kinematics on the Ripley AF. 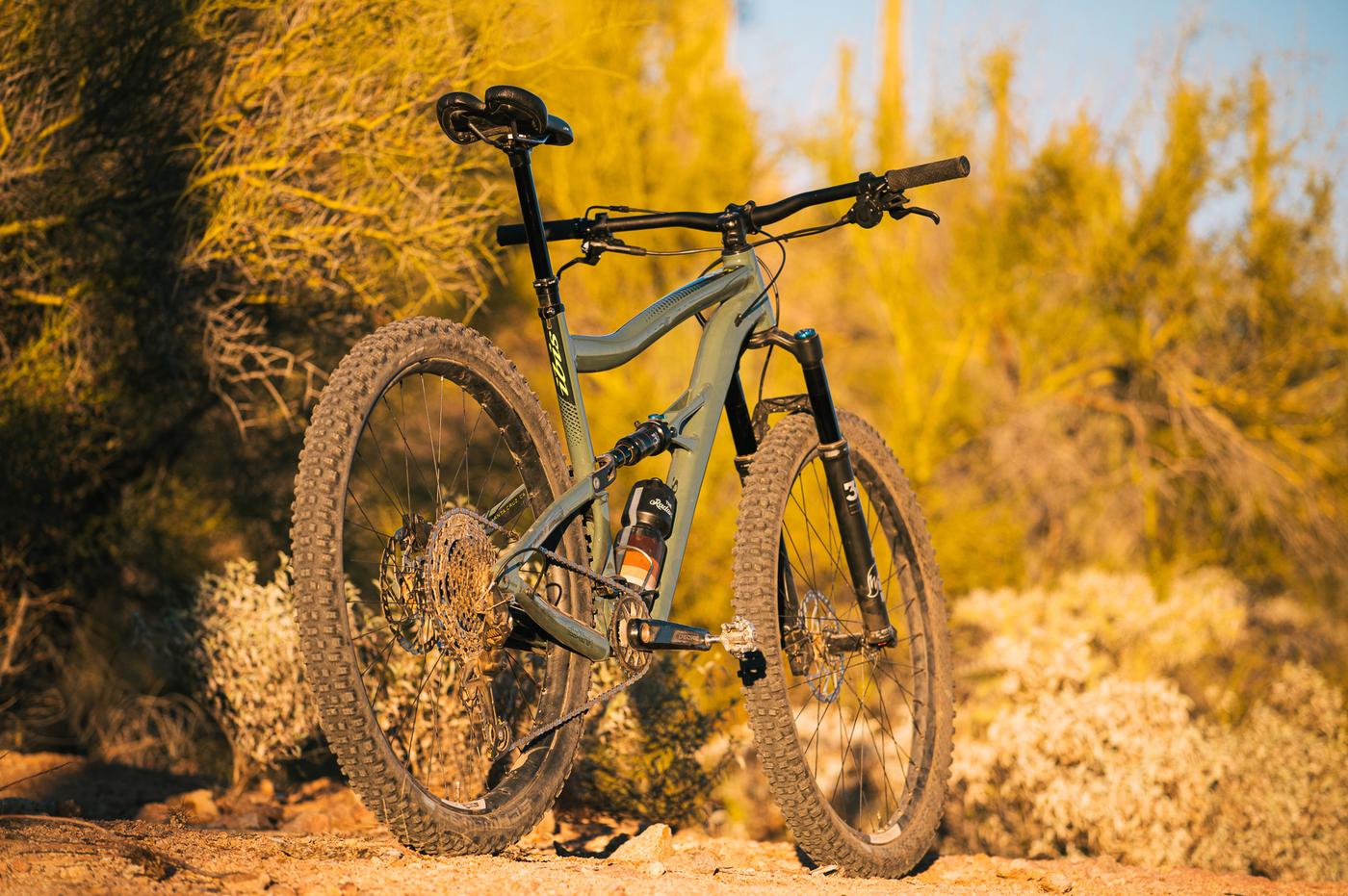 The frame has some really well-thought-out points that I’d like to address as well.  Firstly, ALL SIZES fit a 26oz water bottle under the shock which is pretty sweet, though this is not enough for even short rides when the heat kicks up down in Arizona. Luckily I found that Oveja Negra’s half-frame bag (medium) fits like a glove above the shock on this XL frame.  While I don’t have a complete size run to check, I assume a small or medium in that bag would also fit smaller sizes.

Secondly, the straight seat tube allows for the use of longer droppers – the XL I rode was specced with a 185mm dropper! The standover is low, even on an XL, which is quite pleasant in shreddier moments.

Lastly (and this is a niche) due to the profile of the frame it easily fits on cheaper car bike racks that still attach via the top tube. So there’s no need to spend a thousand dollars on a hitch and rack to hold your new bike; the savings are pilling up already! 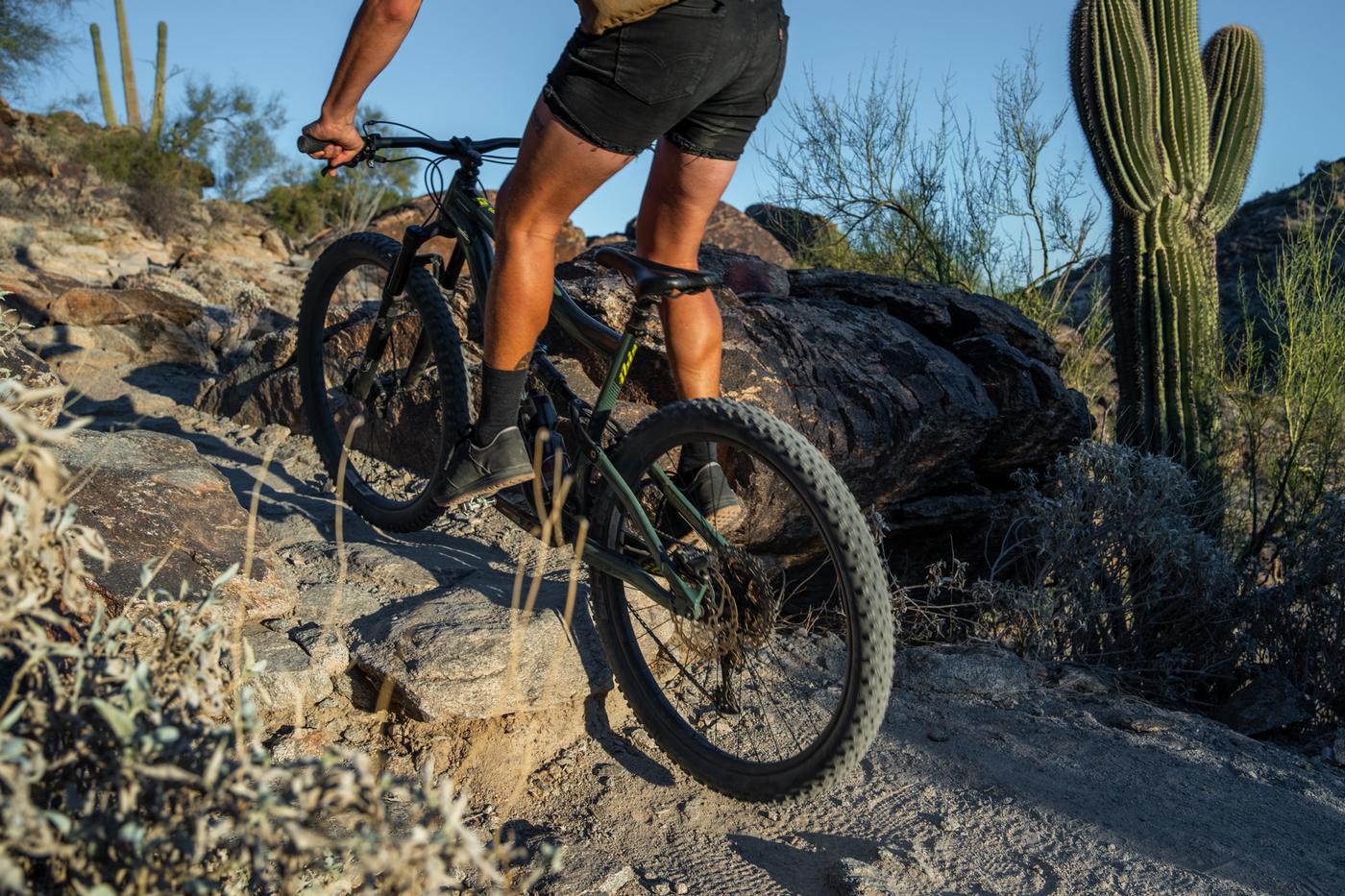 The Ripley AF is an adept climber, feeling spry and supportive. I haven’t ridden every full-suspension under the sun, but my opinion of the DW link here is that it provides a great climbing platform. I’d say it feels like it has a bit more bob in the pedal stroke than the split-pivot Salsas I’ve spent time on. You can put some weight into the pedals and the Ripley AF will stay responsive. While the lockout is easy to access, I never felt the need to switch it except for extended pavement rides.

My main gripe with the bike is how it handled climbing technical sections. Obviously, this bike is a size XL with a rather slack geometry, which inevitably leads to a long wheelbase. The chainstays clock in at a seemingly average 432mm, so it’s really the head tube angle and long reach (500mm on XL) adding to the number. With a bike this long, making it through technical climbing has been a bit more challenging. I found that, if I lost momentum, my front wheel would get stuck on some new obstacle before my rear wheel was through the previous obstacle.

You can’t have it ALL, but if there was one downside to this bike it would be the difficulty climbing very technical and rocky terrain. You could attribute that to my lack of skill (fair), but it’s likely a higher-engagement wheelset could help. With all that money you saved on the bike rack, I’d say a wheelset with a higher engagement hub would be a worthy upgrade for this steed, hell, make it a carbon set while you’re at it. 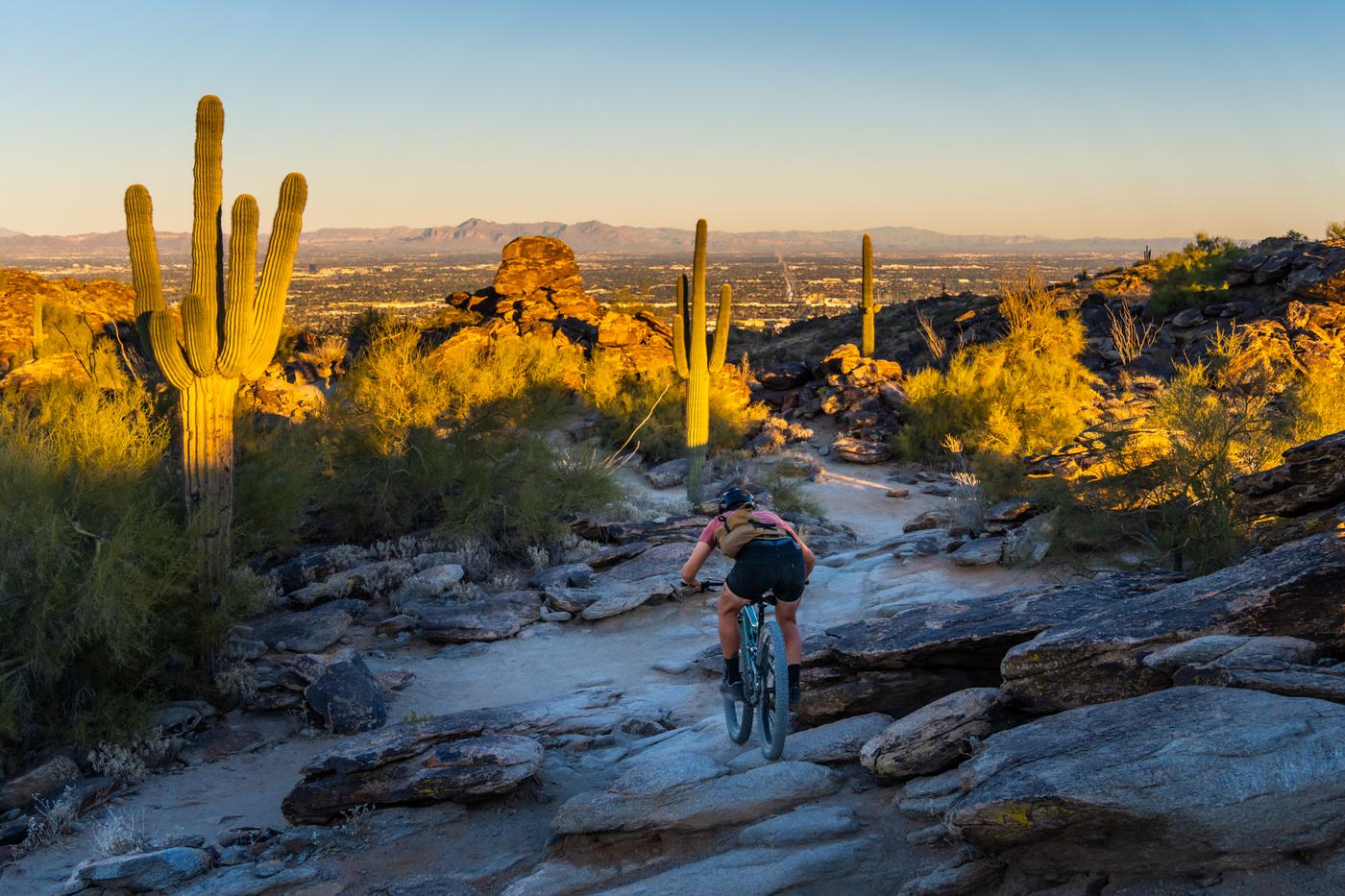 After you’ve pedaled this long wheel-based hunk of metal to the top of the climb, it’s time for your reward. I hate the feeling of a “planted” bike. My local trails rarely have moments where I want the bike to be glued to the ground. For a bike that is as heavy (on paper) as this bike is, I found it wanting to get off the ground often. It dodges that sluggish feeling that enduro bikes have on trails that aren’t rowdy enough for them. The Ripley was always playful and jibby.

The biggest dig on descending on this rig is how encouraging that slack headtube is – you can get out of the bikes league before you know it. The front end is writing checks the humble 120mm rear end isn’t always able to cash, or even the 130mm fork too. As mentioned before, this isn’t a magic carpet ride; nonetheless, the bike remains more capable than I sometimes expect. You will feel the trail, you will have to choose your lines, you will feel like you are still mountain biking. Crazy, right? 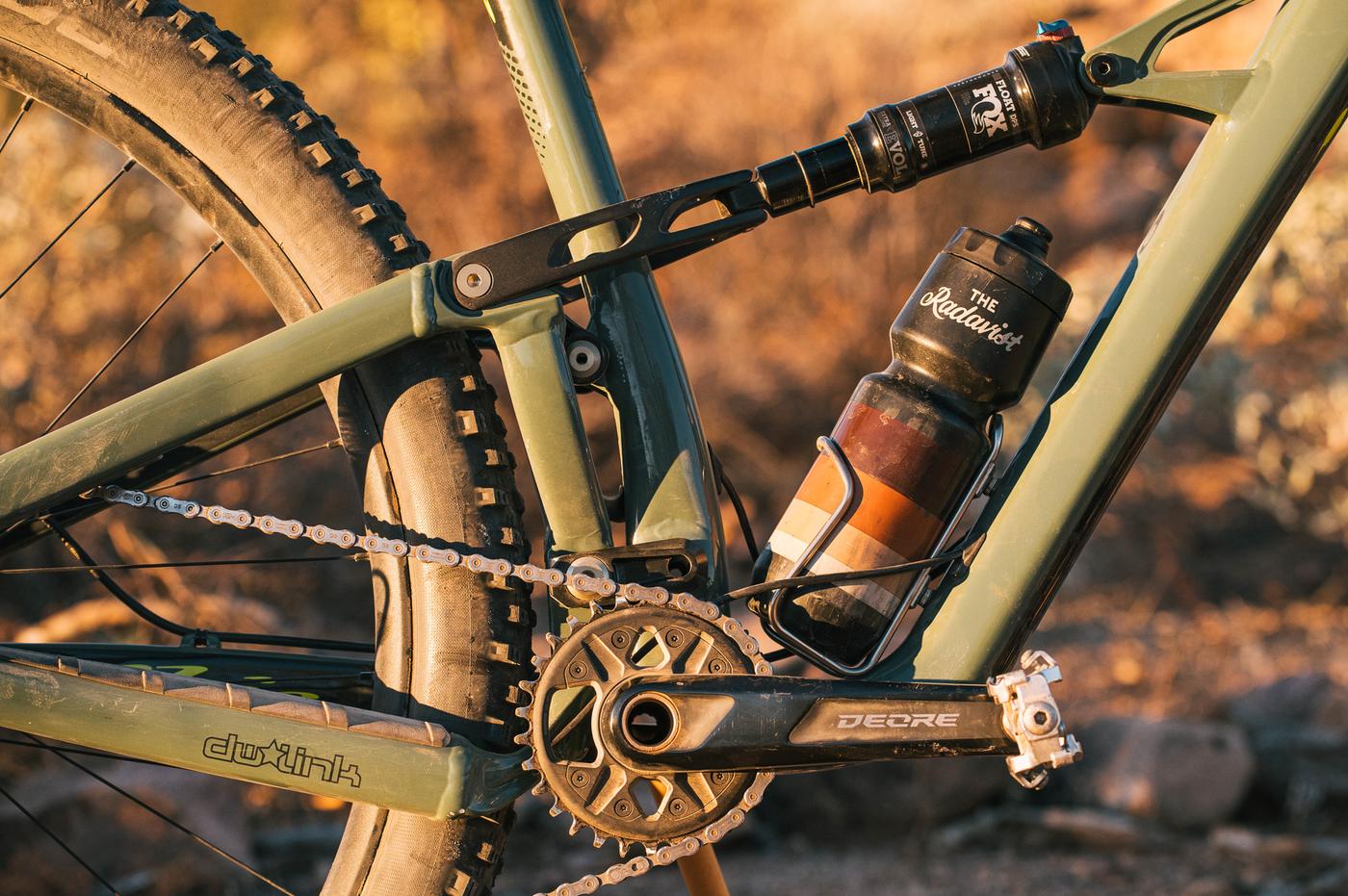 I’m reviewing the Deore build of the Ripley AF which clocks in at the low end of the builds available at $3199. I think Ibis did an admirable job putting money into parts that really need it and skimping where it was sensible to make the price point. First and foremost, when you are purchasing a fully squish bike, you are buying the suspension. Having a full suite of Fox components at this price point is amazing. No steel-stanchioned throwaways here. The Fox 34 fork is a 44mm offset to keep the trail numbers in check and reduce the flop-over feeling that can accompany such a slack HT angle.

The cockpit features lots of Ibis branded parts that feel solid and basic. Coming from spending a lot of time on my Sklar Bullmoose bars, the Ibis handlebar felt narrow and lacking sweep. The lock-on grips didn’t feel awesome, but again that’s personal preference and most folks would probably opt to swap those anyway. 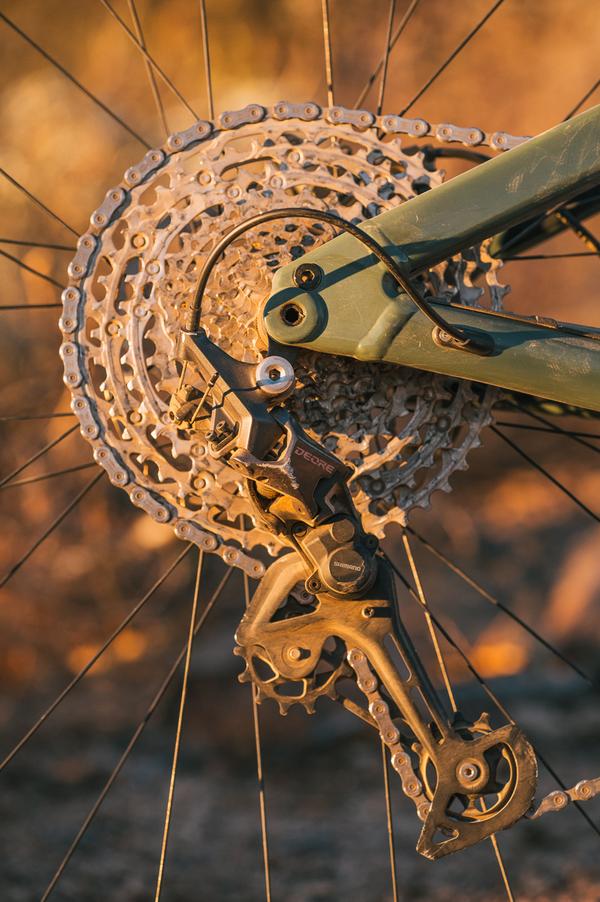 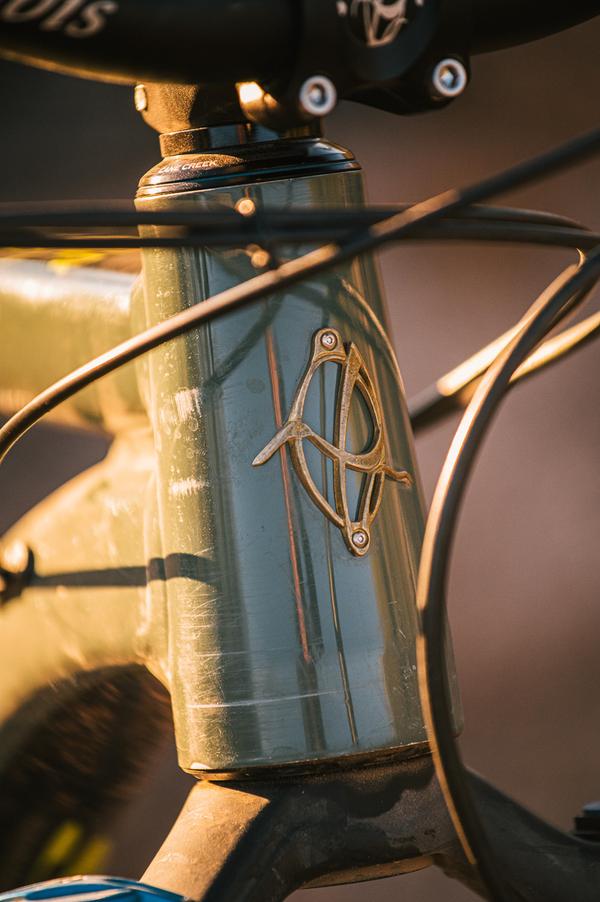 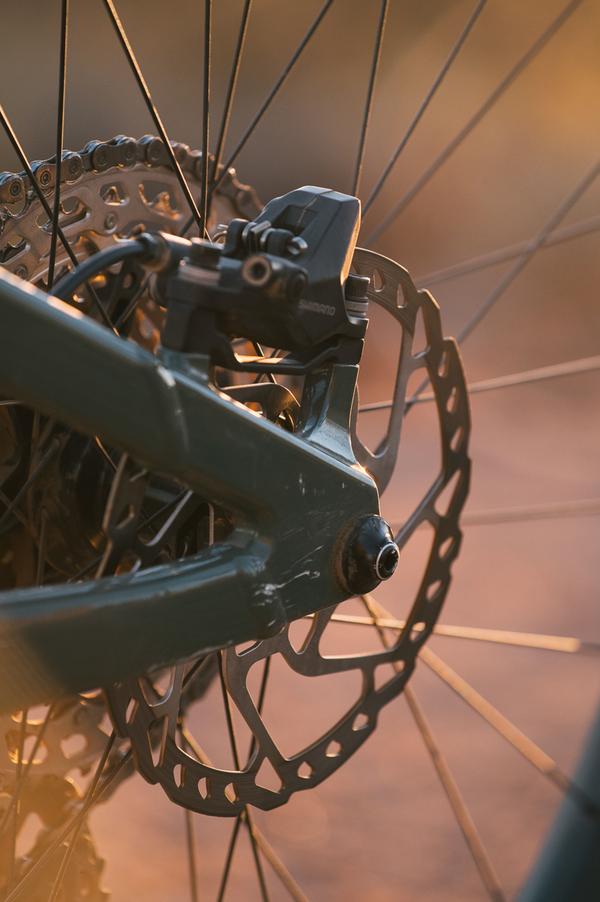 The Deore two-piston brakes did their job and, for me, having Shimano hydraulic brakes is a must for their ease of service. The Deore 12-speed group shifted magnificently and I had no issues with it. I’m not a fan of needing a new freehub standard, but (like Nikon finally redesigning their lens mount after 700 years) it was probably time to rethink the Shimano HG driver, too.  The Ibis wheelset is burly and the 35mm rims pair nicely with the 2.6” Schwable tires.  The hub engagement left something to be desired, but that’s likely just because riding Industry 9 hubs has ruined me.

I really enjoyed the Schwable tires for their rounder profile and being able to handle sharp rocks, and even sharper fauna, down in southern Arizona.  The KS dropper is cheap but consistently went up and down with a bit of play that is to be expected. You may notice the odd dropper lever in the photos since I broke the stock one with my shin. Thankfully, the stock lever broke before my bone did. 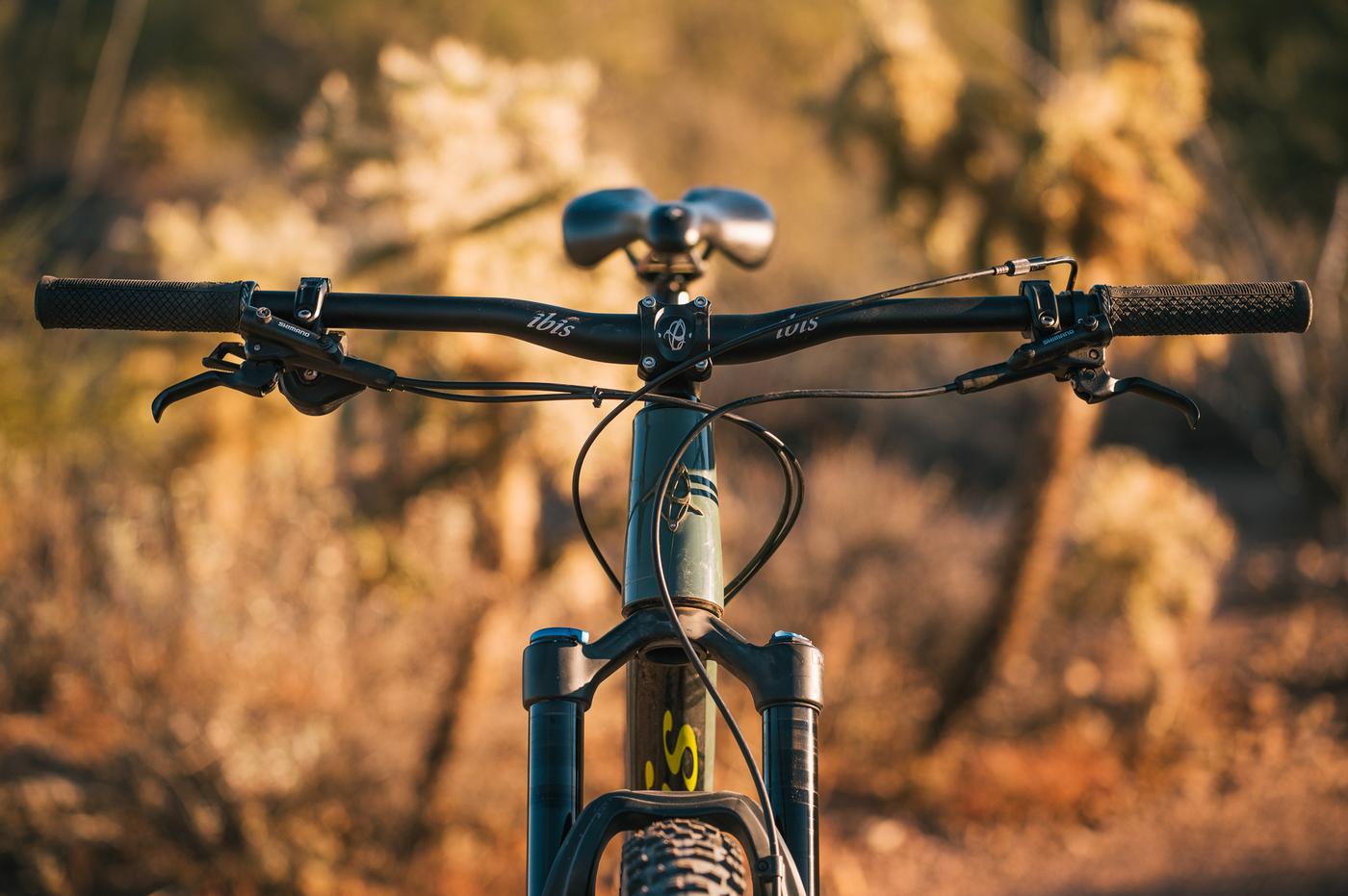 Something I have touched on in the past, and that I really love, is the ability to upgrade your current bike into this bike! Ibis kept things simple and pretty much up to the standards of the recent past. If you have a boost 29er wheelset, English threaded bottom bracket, or 130mm tapered fork from your current bike, you can buy the Ripley AF frame and shock for $1899 and swap your parts over. The eschewing of press-fit, super-duper boost, and the like makes the Ripley AF capable of being a great parts bin build. 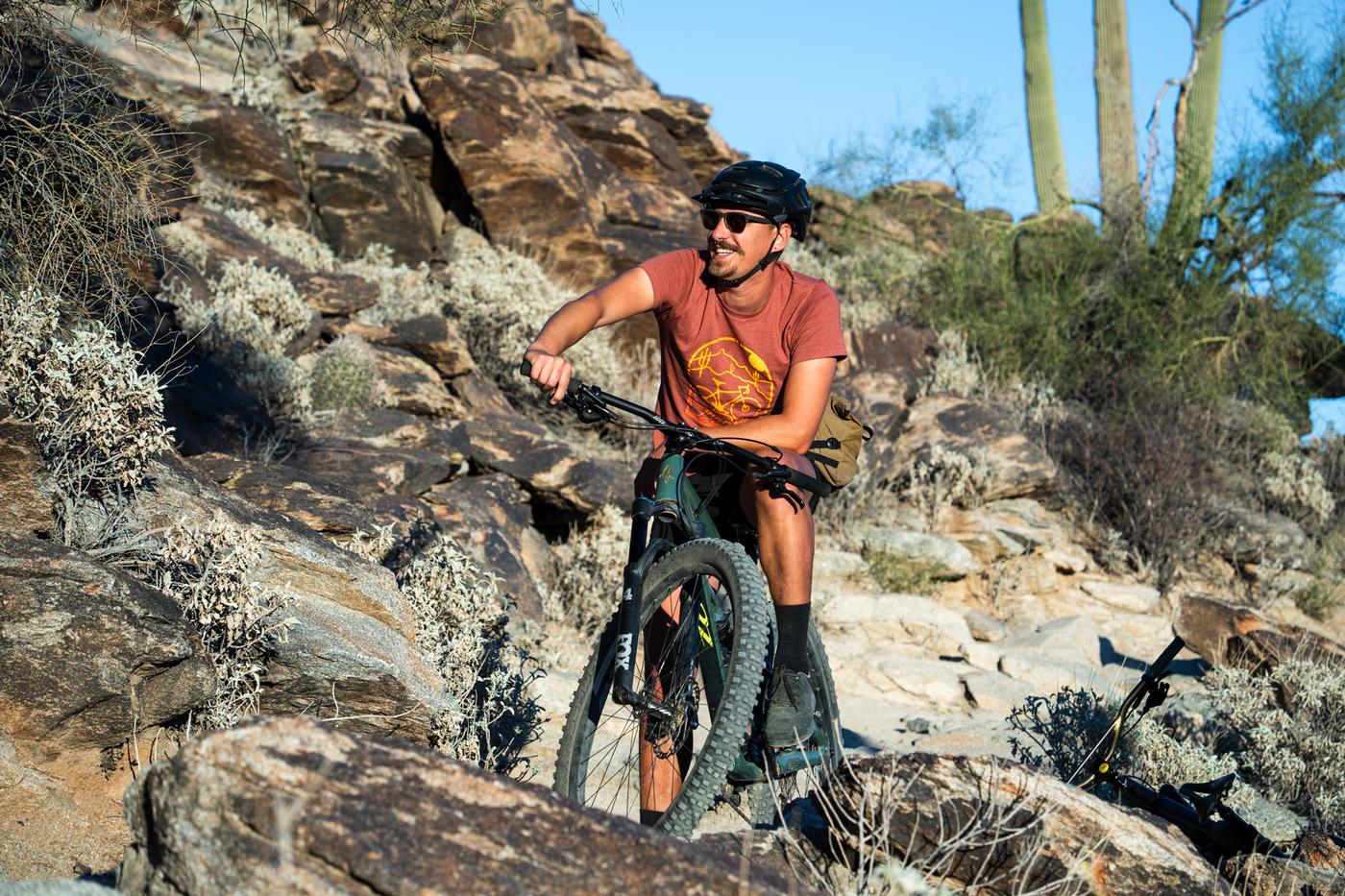 It is easy to look at the numbers and think this bike is going to feel large and unwieldy.  At 6’1” and short-legged for my height, I tend to straddle the line between size large and extra-large. I decided to go with an XL and it fits pretty well. The 500mm reach looked intimidating on paper but felt more reasonable than I’d expected.  If you are between sizes like me I’d recommend sizing up. The stack height felt a bit short for me, but the person who tested this bike before me cut the steerer shorter than I would have. If you are on the taller end of the height recommendation for an XL (6’-6’6”) you may find that geometry has a considerable saddle to bar drop. 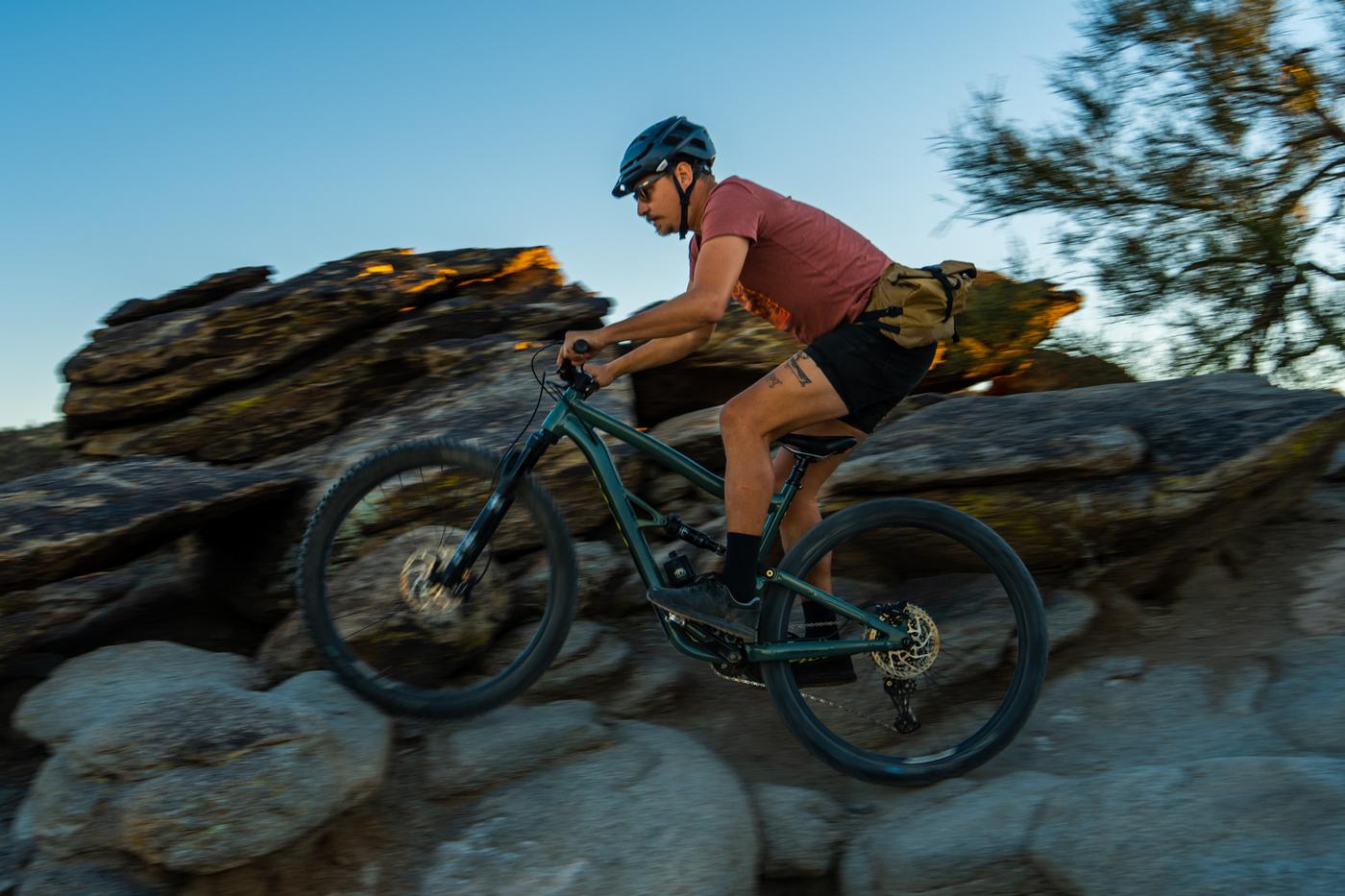 -Value concentrated in components that matter

-Geometry writes checks the suspension might not be able to cash 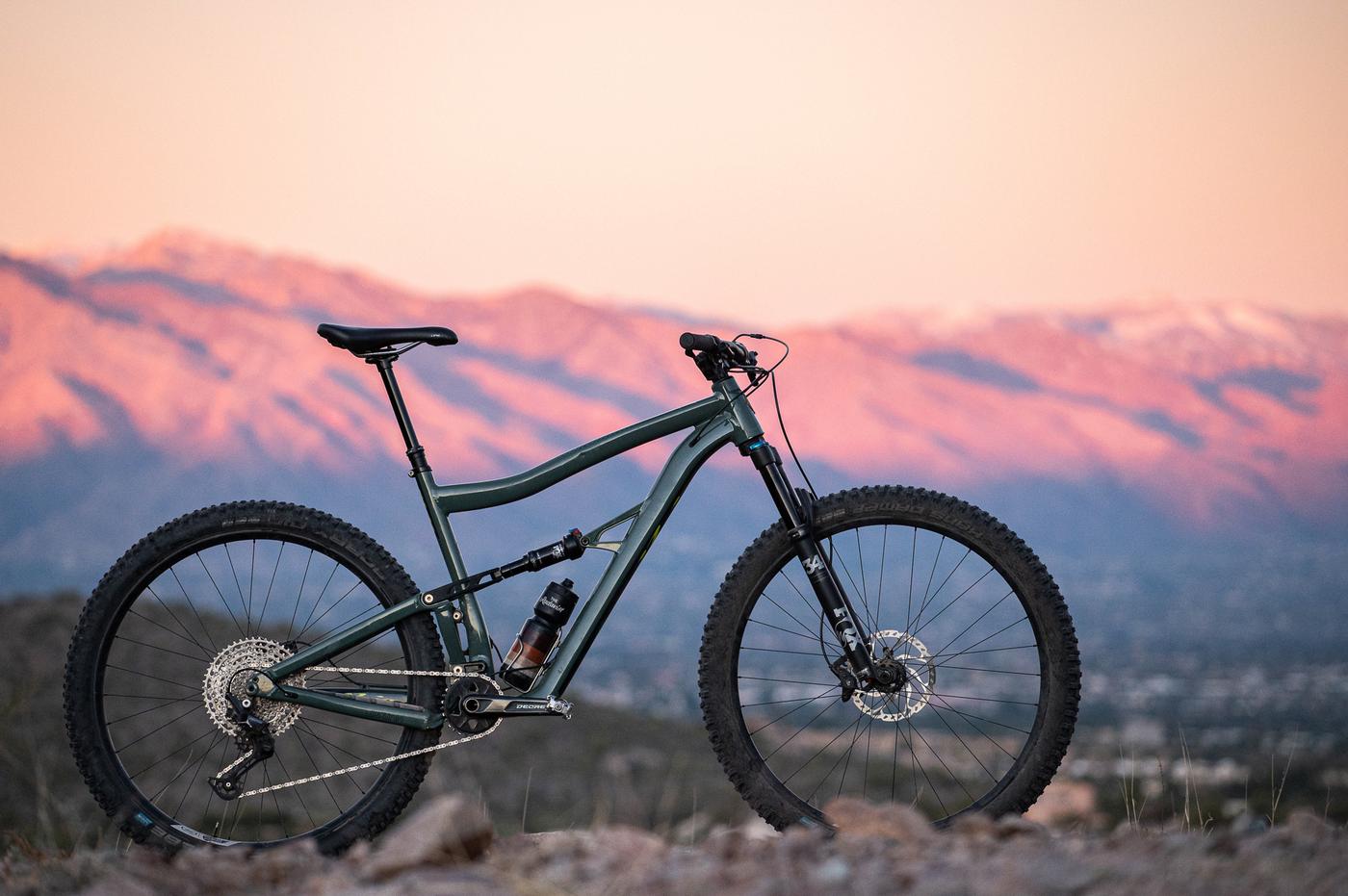 C’mon wrap it up already

From the occasional walk up a techy section to hanging on for dear life as I max out the suspension thundering through chunder, I have truly enjoyed my time on the Ibis Ripley AF. Though I didn’t hit on it above, I truly adore the minimal side profile branding and natural coloring of these frames. I think the price and spec of this bike make it a great upgrade, or even a wonderful first mountain bike.  The travel range keeps the bike fun and lively on easier trails and the geometry really allows you to push the specs on harder and advanced trails as you become more experienced.  I wholeheartedly recommend this bike so much that I’m gonna ask Ibis if they would be so kind as to sell it to me during these trying times to source a bike.