Overlanding is traditionally a term that describes the forging or following of a route for moving livestock long distances from one location to another. These routes were created to send the livestock to market or to another location for feed or weather events such as floods, drought, or bush fire all common occurrences in the harsh Australian outback. This movement of the livestock along these “overland” routes in the Australian context is known as droving.

In creating this bicycle overlanding route and story I’d like to begin by acknowledging the Traditional Owners of the land on which we meet today. I would also like to pay my respects to Elders past and present. From this heritage, overlanding is a forging or following of a route that will generally have a component of it remote and therefore will require self-reliance and resilience generally. Overlanding in a sense is the Australian historical embodiment of adventure it requires an exploration of the landscape as much as it does and exploration of your own endurance of the mind and body. Its origins are deeply embedded in the cultural identity of the country. Overlanding itself in a sense helped shaped Australia.

Traditionally many great historical overland routes have been created from the process of droving. Whilst droving way of life may have waned in modern life the routes created have endured and are still iconic to this day. Names like the Murranji Track, the Birdsville Track, the Strzelecki Track and the Canning Stock Route evoke awe in the hearts of any adventurer. The feats of creating these overlanding routes are the stories of legend and have most probably been told, exaggerated, and passed on over from campfire to campfire for as long as there has been travelled.

William James Browne owned Nilpena Station in the Flinders Ranges of South Australia in 1879. He contracted the drover Giles to take 12,000 sheep from there and overland them all the way to his new properties Newcastle Waters and Delamere Stations in the Northern Territory. Only 8,000 sheep survived the journey. [11] Although there are few drovers left, the overlanding routes left can be aligned to a simpler life with less modern trappings. It is a life that resonates with a certain few who look to continue capture spirit and is a term now used widely around the world for the setting and exploration of remote routes via off-road capable transport where the principal form of lodging is camping.

So then to consider a route overlanding, containing a spirit of exploration, it needs to require self-reliance and resilience to complete the traverse most probably as direct as possible between two locations. Stitched together over potentially remote roads tracks across a wide variety of rugged terrain. Traditionally drovers completed these trips pitting themselves against the harsh conditions of the country they travelled through without the luxury of a well-travelled path. Adversity and ingenuity to overcome this adversity common.

The Tibbett brothers drove a flock of 30,000 ewes in the early 1890s from Wellshot Station to Roma in Queensland, Australia, a distance of over 700 kilometres (435 mi), in search of grass for the stock. The sheep were all sheared in Roma and lambing started as relieving rains came to Wellshot. The flock was brought back with an additional 3,000 lambs. [12] 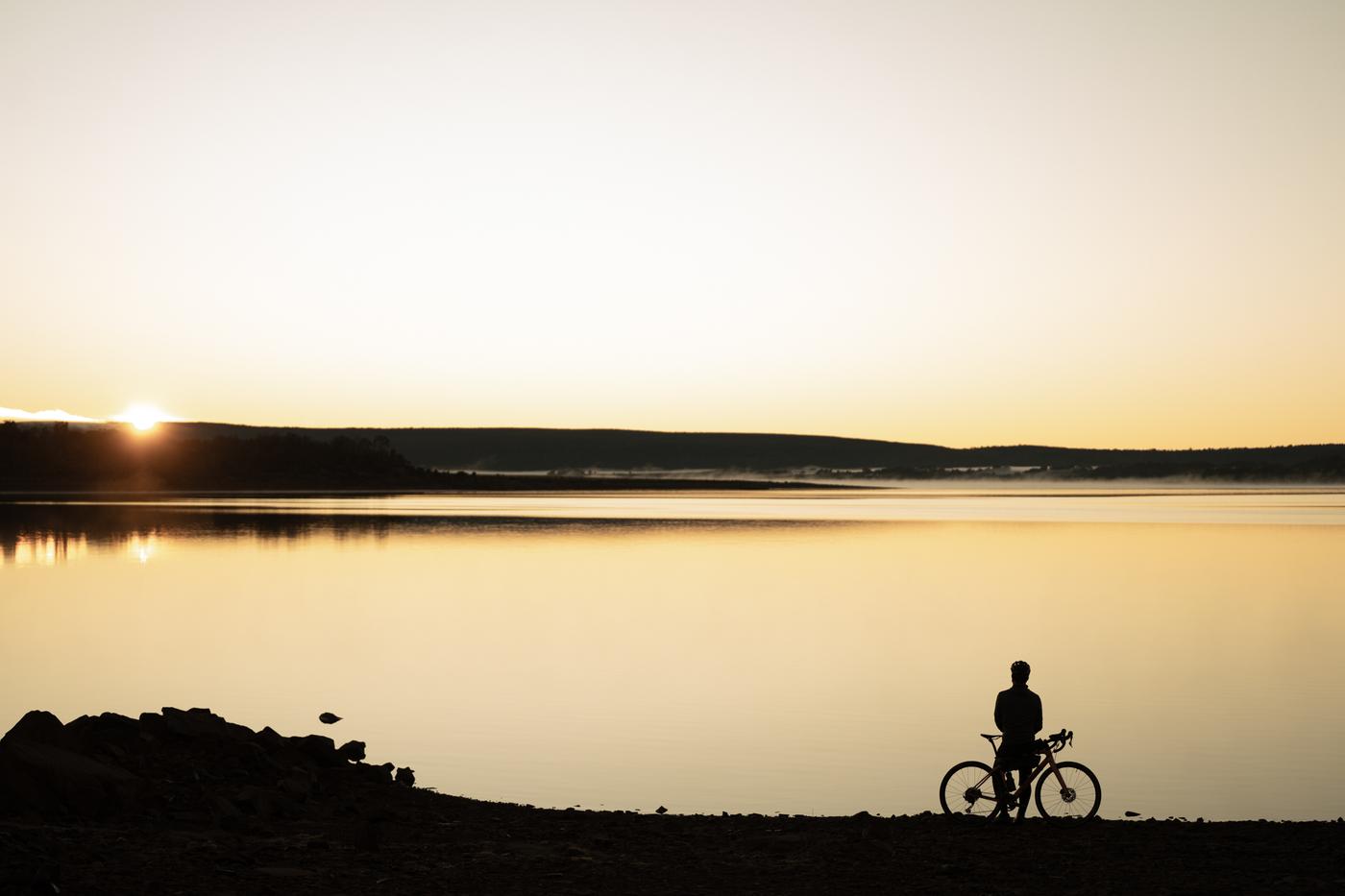 All routes need to start somewhere. The concept of a start point can be thought of both as a location or an idea. A start point of well thought out route with the potential for adventure at its heart should ideally be both an idea and a location that ties together into a single narrative. This should all be in sync. This route to align or be in sync with the idea of overlanding had to have a start point that allowed traverse across the island land mass of Tasmania (Lutruwita). From sunrise over the Tasman sea to sunset over the Indian Ocean. Following the sun at a latitude 42 deg South. A journey between two locations from The Hazards to Hell’s Gates.

The core of an overland route should have or follow gravel/dirt roads, fire trails, and single track. The contrast of roads and tracks found over 400 or so kilometer route mapped on paper provides a line almost straight across Tasmania from pristine white sand beaches granite coastal mountains and clear blue salt water of the east coast Freycinet peninsular nestled in the Tasman sea. To the dark wild ocean crashing against the untamed west coast. In between these two points lies little travelled roads through conservations of the backcountry, bridges have been pulled and roads blocked to challenge this remote passage from the east coast. Into rolling hills of midlands farming country and towns. An adventure only begins when the plan falls apart. Roads devoid of discernable surface, bridges missing, and forestry roads closed with boulders, provide just enough to change this trip into an adventure. A through route in only the marginalist of terms.

In 1900, a drover named Coleman departed from Clermont with 5,000 sheep; the country was drought-stricken and he had been instructed to keep the mob alive. Coleman wandered an incredible 5,000 miles (8,000 km) through southwestern Queensland finding feed as they went. When he eventually returned he brought back 9,000 sheep, had sold over 5,000, and killed nearly 1,000 for “personal use.” [13] From the rich farming land and a brief interlude of quiet country towns of the midlands, the route begins to climb gravel ribbon into the central highland lakes. This is fishing country a land of 1000 lakes. It is as beautiful as it is harsh with some would say stark landscape shaped by cold unpredictable weather. These are conditions that harden people who are lucky enough to experience it. When planning a route, a place to sleep and refuel is an essential consideration. Whilst harsh the central plateau is not completely devoid of comforts and a warm fire and cold beer await at a highland pub. After all, it would not be true to an overland route if there was not a pub somewhere in the route. With subzero conditions outside the warm comfort of a fishing cabin in the highlands is a grateful, if somewhat necessary, escape from the conditions.

The allure of an overland route is that traverses not only geographically but metaphorically through the heart of the landscape. Crisp icy air and misty lakes greet the morning descent out of the central highlands and into the west coast past the true center of the island. The morning gravel riding of the route is an indescribably beautiful experience.

Twenty thousand head of cattle were removed from Wave Hill Station and overlanded to Killarney Station, near Narrabri in New South Wales, in 1904. The straight-line distance between the two locations is around 3,000 kilometres (1,864 mi). At the time, it was considered a remarkable feat of droving and took 18 months to complete. [13] The only passable road through the west coast requires the route to align with mostly established sealed roads with just a sprinkling of gravel deviations, one following large steel banded wooden hydro scheme pipes linking lakes. Established and sealed roads does not mean being devoid of adventure. Whilst the trail surface can an important aspect of an overland worthy route, it should not define it. Indeed, there is more to an overland route than the surface it traverses. Valleys and gorges to wild untamable rivers and deep calm lakes are navigated under the watchful eye of the spires of mountains that tower above. Switchbacks and straights to both climb and descend provide the added spice to the smooth surface of the road, linking wild mining towns and taking us ever closer towards the final destination of the route. This overland route getting from as far east as you can go until you get as far west as you can go, following the rising and setting of the sun under your own power seems a fitting way to acknowledge and connect to the spirit and the land of Lutruwita. Tasmania is a wild and rugged island wedged between the Indian and Pacific Ocean seems a fitting canvas to draw a line. The line from The Hazards to Hells Gates seems both a good start and end to a route that may be considered just enough to be called Overlanding.