Earlier this year Amy Danger blew us away with the story of her intricately restored and documented dumpster find Cinelli Laser Rivoluzione Prototype. Today she’s back with another stunning historic track bike from her personal collection, a Custom Gianni Motta Personal 2001r low-pro track bike with Mondrian-inspired color scheme and Columbus Air tubing. Let’s check it out in detail below! Gianni Motta threw elbows with the best of them in the mid-60s to 70s grinding out a number of impressive wins including the Giro d’Italia (the win was eventually revoked for popping dirty for banned substances even though most everyone brazenly used enhancers). Toward the end of Motta’s racing career, he went on to produce quality framesets, contributing to what could be considered the golden era of handcrafted steel. Motta was not himself a frame builder but he worked to attract some of the greatest craftworkers of the era to his shop including Antonio Mondonico and Renato Negri, either of whom could have built this spectacular bicycle around 1985. Motta himself can’t remember specifically who commissioned this Mondrian “super bicycle” as it’s referred to in the catalog, only that the bike itself was memorable as a shop favorite. The Personal 2001r was the top of the top-shelf Motta, the “r” denoting rinnovato, or a “renewed” version of their former top of the line: the 2001. This frame boasts a trifecta of relatively unusual attributes even for a custom Personal 2001r Motta. It is a low-pro with a 650c front, a pista model, and was built using the uncustomary, quirky and gorgeous Columbus Air aero-shaped tubing. 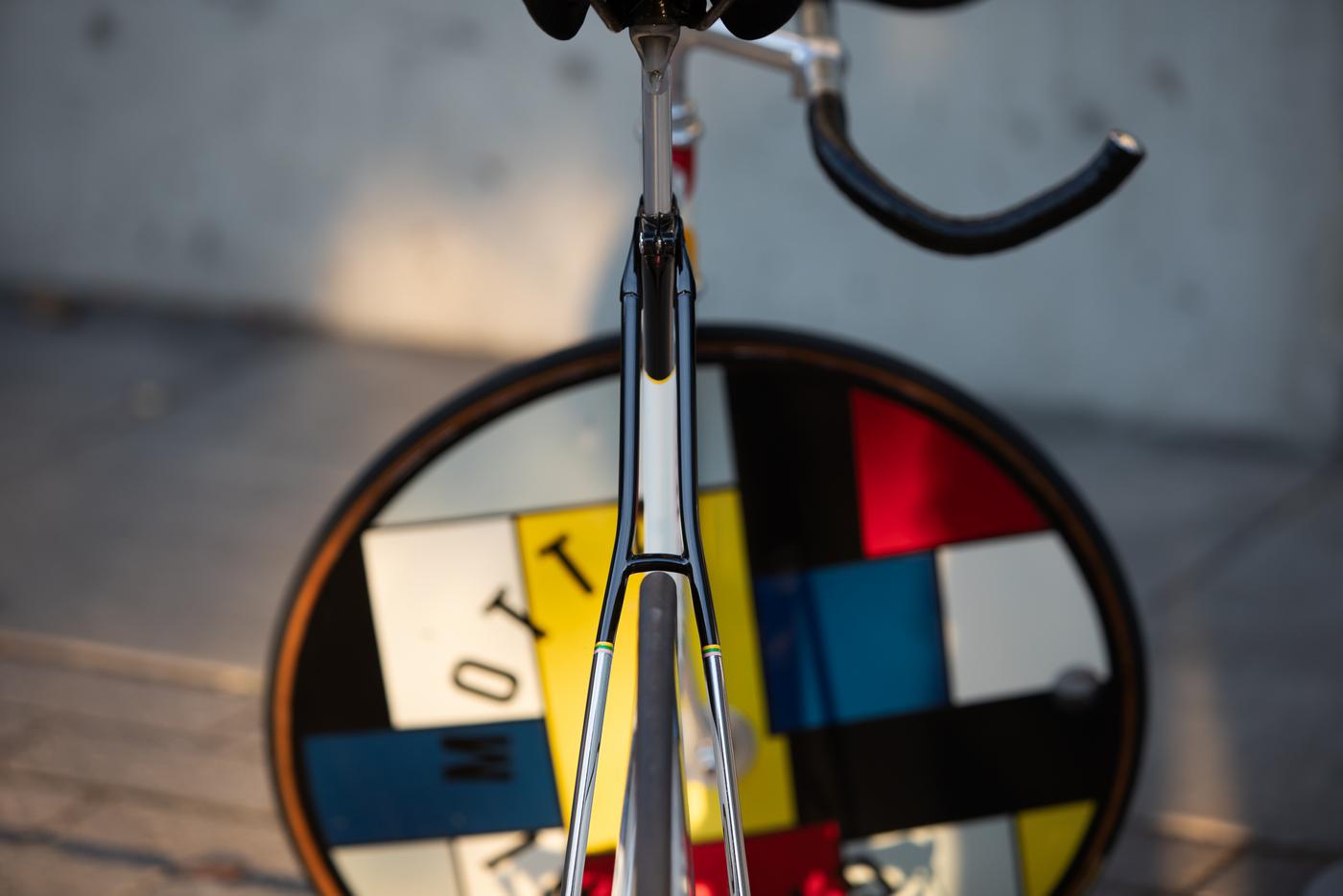 Motta enthusiasts know to direct the eye right to the seat stays of a Personal 2001r where you’ll spot the patented “trans-tork” configuration. This signature style of pinching the stays in above the brake bridge in parallel straight lines toward the seat cluster was promoted as reducing deflection during sprints and hill climbs thereby transmitting more torque to the rear wheel. I’ll buy it — this thing is pretty stiff for an Air frame. 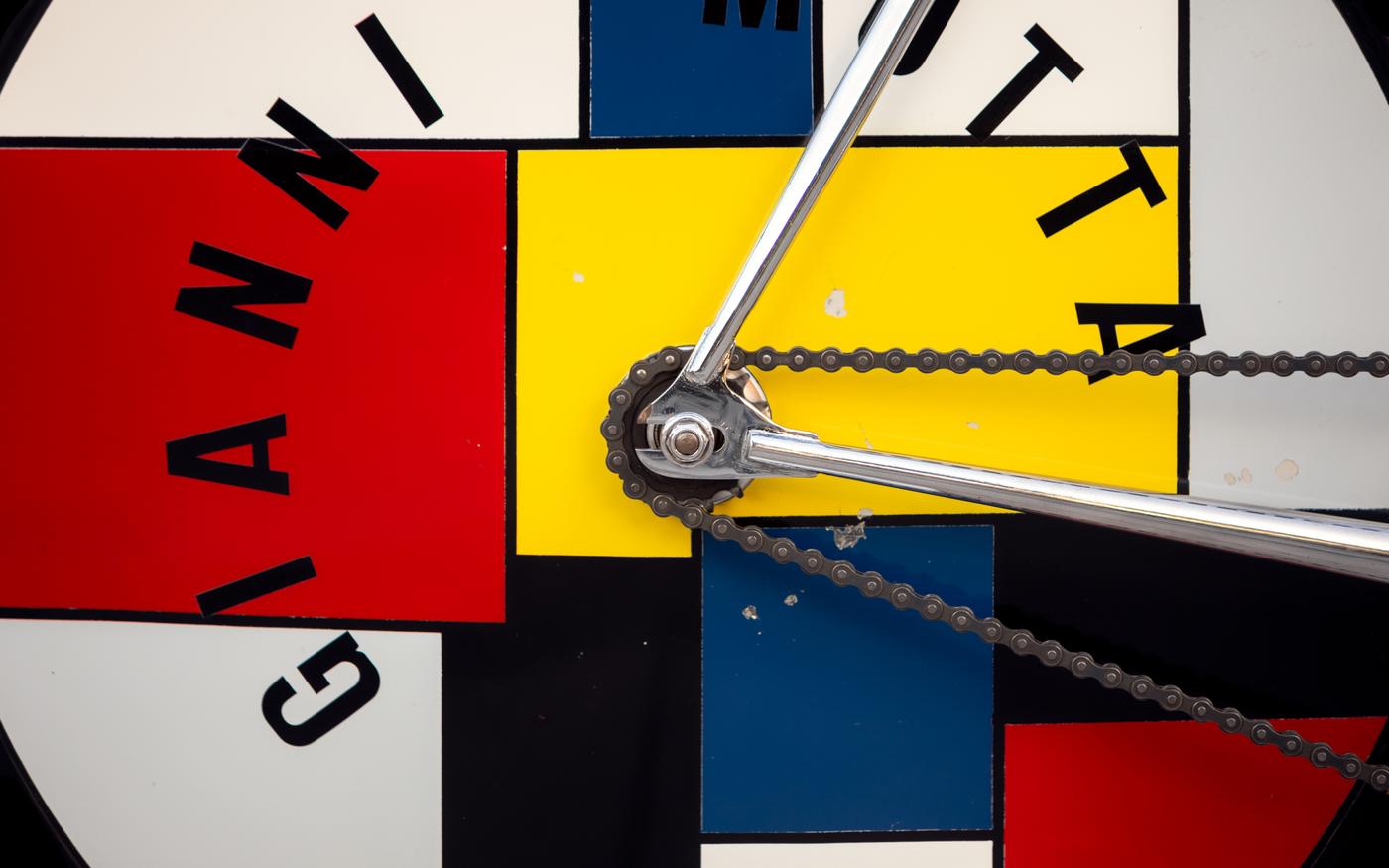 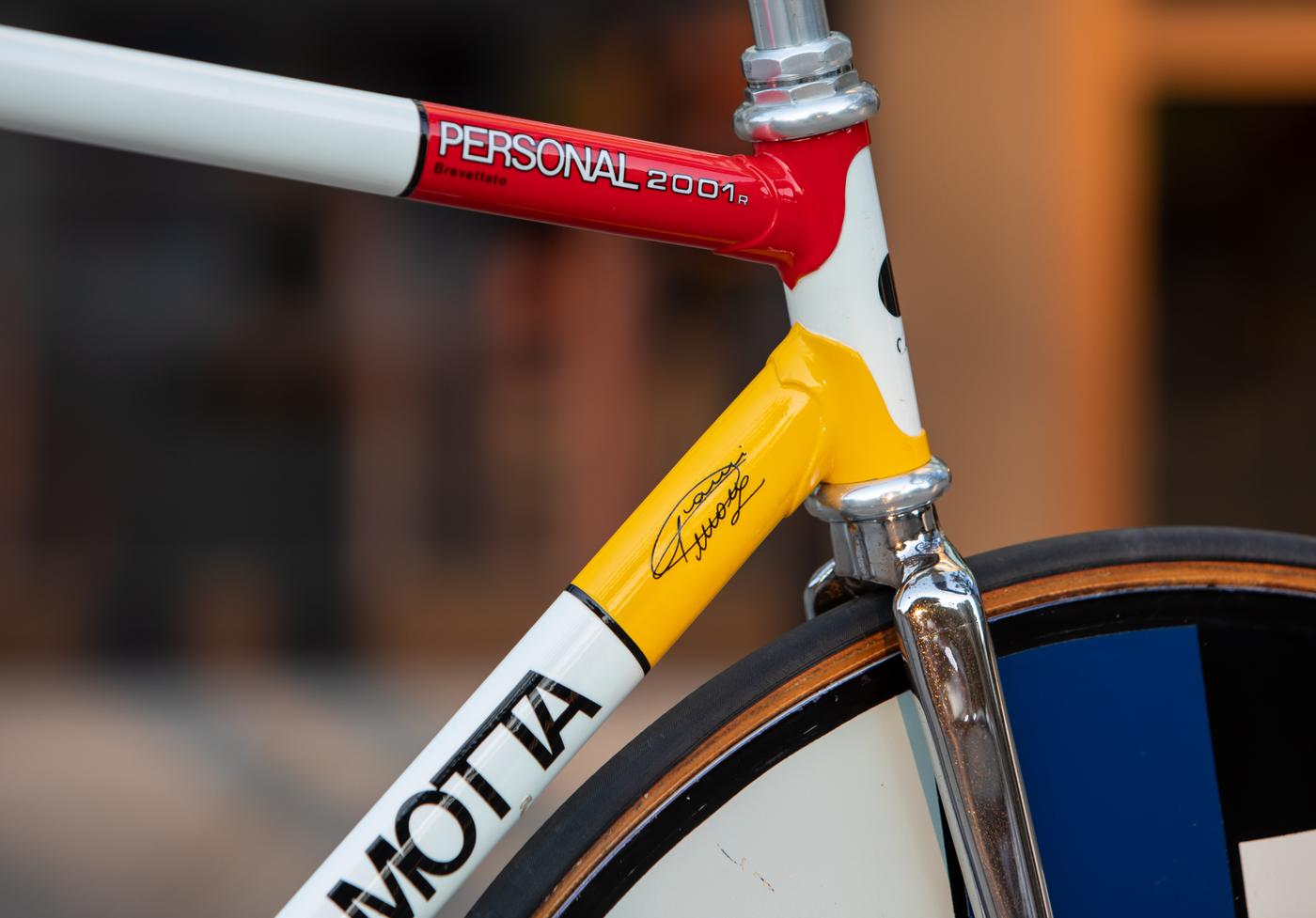 The Mondrian-themed, factory-original paint pushes this Motta even deeper into the rare-bird category. It’s not the only Motta with a Mondrian-inspired colorway but certainly the only low-pro track Personal 2001r built with Columbus Air having this striking theme that I know of. Wheels are Fir, bars Cinelli LA 84, crankset Campagnolo Super Record unfluted. In the sunlight, the whites gleam with pink sparkle hi-lights that I like to think are a nod to that elusive Giro jersey. It appears that it was a wall-hanger. Wheels hadn’t seen glue; the wear looks like typical shop variety. The era of not being ridden ended as soon as the tires came in and the glue dried…