It’s not every day you’re presented with an opportunity to step out of the routines of daily life and to reconnect with a couple of old friends in a beautiful, fairly isolated environment; and to get to fully experience that place from the saddle of your bicycle. When a couple of my oldest friends, Josh and Alex, invited me on a bikepacking adventure – and asked me to assist with a video they planned to produce about the trip – help with logistics, carry some gear, etc. – I gave an enthusiastic and immediate, “I’m all in.” Josh and Alex had secured a generous grant from Kitsbow to capture our time on camera, in hopes that our experience would inspire and motivate others to get outside, unplug from life a bit, reconnect with old friends, and explore an exciting and accessible environment within a reasonable window of time. What cyclist wouldn’t want to throw their bike in a travel bag, fly down to Los Angeles for a 3 day weekend, and spend the bulk of that time pedaling around on Santa Catalina Island with a duo of old friends? The planning for these kinds of adventures is always a process that I get a ton of satisfaction out of. Gazing at maps and relief profiles, scanning the web for a glimpse of the terrain we’re likely to encounter. Checking weather reports, and surmising what resources and amenities will be available to us along our way- conjuring that ideal scenario of the shaded summit oasis with the hamburgers and frosted draft beer. Dialing in the bike and bag setup- the packing and unpacking and then repacking to try and keep the overall load to a minimum while accommodating the desire for a few creature comforts that can make the trip just a little more enjoyable. I’m of that amateur minimalist ilk, but it’s these outings that force me to pare things back and make the most out of versatile clothing layers, lightweight cook and sleep solutions, while also ensuring some space for things like a pair of sandals, a favorite flannel, or an extra camera lens. And then it all gets meticulously packed away into thoughtfully engineered bags that speak to our sensibilities of material and aesthetic; our loads ideally distributed somewhat evenly, and to our preference. Bikepacking gets to be that enviable marriage of the sacrifices of backpacking with the efficiencies and sheer inertial bliss of off-road cycling- especially if you’ve packed your bike well. Once our deliberations are concluded, regarding what goes and what stays, and we’ve packed and repacked the bags and the bikes are dialed, we mentally and physically sign off on it. It’s then, that insufficiently caffeinated, we depart the La Crescenta foothills and descend through marine layer down the I-5 and 710 toward Long Beach at 7 am on a pleasantly grid-lock free Sunday morning. The rest of the weekend gets to be about the moment. It’s relieving to just let go of the, “I hope I remembered to pack…” and to revel in that anticipation and appreciation for that window of time where you get to just be exactly where you are, with only what you’ve brought and resigned yourself to let the experience unfold. One of the standout aspects of this trip was departing Long Beach harbor by ferry, with the expressed intent of exploring and recreating on an island. This experience is, in and of itself, a privilege, and one that is not lost on us. With loaded bikes perched against the stern railing, and ‘Old Glory’ waving proudly in the sea breeze, wake and waves mist our gear as we make our 30 mile passage quickly and arrive late morning in the harbor town of Avalon- an immediate contrast to the overwhelmingly industrial, albeit transcontinentally significant port city of Long Beach. Our arrival is marked with a measured placidity and the onset of a smile that we are unsuccessful in wiping clear of our faces over the course of the next two days.

There’s a bustling vibe to Avalon, and all who have made the trip are genuinely enthused to be here. Some have made the trip to snap a few photos, buy some memorabilia and an ice-cream cone, maybe take the shuttle to the botanical gardens and then turn around and high-tail it back to the mainland. But in others, you can sense that this place is familiar and special to them- that in the years they’ve been coming over here, so much has changed at home, but things on Santa Catalina have stayed relatively the same. I feel humbled and fortunate to be here. We share our plans for exploring the island by bike with those who seem intrigued. You get to see the eyes of the younger generation light up with wonder when they see these cumbersome bicycles loaded down for adventure, piloted by these curious vagabonds destined for the northwest reaches of the island. One gentleman even asks Josh if his bike is an E-bike. Minimal offense is taken. 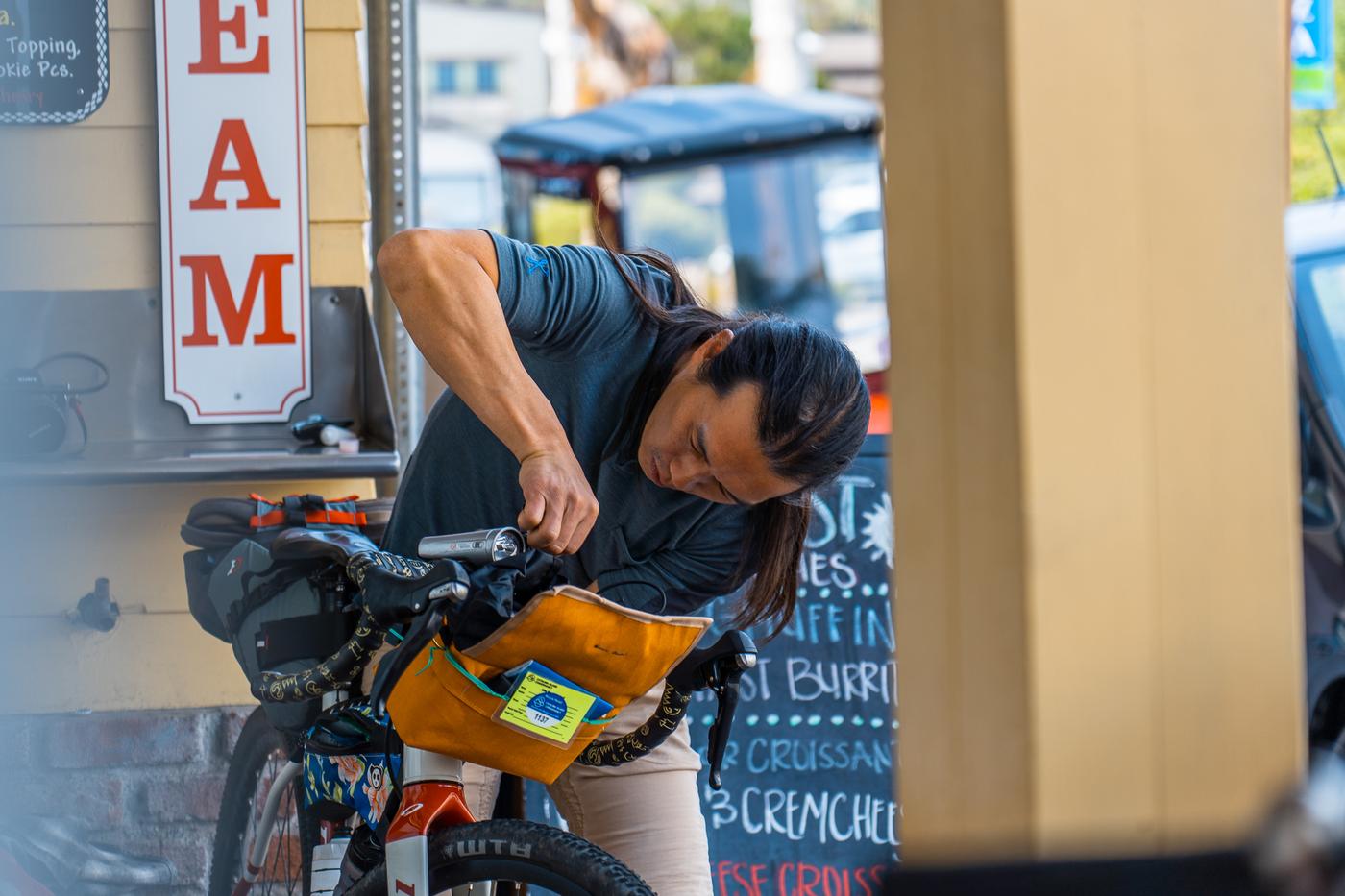 In the Catalina Island Conservancy office, we retrieve our Freewheeler Bike Passes, an included benefit of the Conservancy Pass that we each were required to purchase. The Conservancy has been responsible for promoting environmental stewardship on the Island since 1972, and it’s a small price to pay for access to all of the various roads and bike-friendly trails that provide a tapestry of routes on the island. We’re pleased that our modest contribution will go towards maintaining continued protection of Santa Catalina’s abundant natural spaces, as well as educating future generations of visitors and residents about the historical, cultural and ecological significance of the island.

The initial climb out of Avalon is steep and sustained and we’re rewarded with stunning views of the harbor. Although it’s not peak tourist season yet, there’s a small armada of sailboats and commercial crafts moored in the bay; framed by stucco structures painted in pastels- a vibrant foreground to the imposing verdant hillsides towering above. The route along Old Stagecoach Road is lined with strategically planted eucalyptus trees- a welcome shaded promenade toward higher ground. Our efforts earned us more impressive vantages and the isolation afforded by the interior of the island. En route to the ‘Airport in the Sky’ we are passed by small buses of excited eco-tourists-bound for a zipline course, weathered utility vehicles carrying road and facility maintenance workers, as well as the occasional ‘side-by-side’, transporting guests and residents alike along the primitive roads of the island. The people and vehicles thin out considerably within the first few miles of climbing out of Avalon and we’re left with ribbons of wide-open roads to ourselves. There’s the occasional encounter with a few other souls complete with a knowing smile or an acknowledging nod that you’re both in on the same great secret. That conjured image of the midday shaded oasis with hamburgers and draft beer is fully manifested at the ‘DC3 Grill’ situated at the aptly-named ‘Airport In the Sky’, where we feast on buffalo burgers. The American bison-somewhat of a local mascot, populate the island after being introduced early in the 20th century, and now can be spotted in the wild. This meat we’re savoring, we’re assured, has been sourced from the mainland. It’s washed down with a well-earned pint of cold beer and pineapple popsicles- a perfect mid afternoon lunch and respite from the peak sun. It provides us with the fuel and motivation we need to press on, punctuated with a memorable descent down to El Rancho Escondido where we encounter the Rusack Vineyard- a well-regarded and picturesque small vineyard, situated on what had been a horse ranch dating back to the 1930s. The vines and landscape at Rusack provide a seductive foreground for the spectacular view of Little Harbor and the west coast of the island- which we reach in short time, rolling across lush hillsides strewn with succulents, manzanita and wildflowers. It’s pleasing to see the landscape with such healthy growth and vibrant color after a rare, wet winter in Southern California. It feels like somewhat of an anomaly, anticipating the inevitable dry and sun-baked summer months ahead. The early evening hours unfold in a meander towards Two Harbors- our final destination for the day, where we’ve secured a yurt for the night. We each take some time to split away from one another and just enjoy some serenity and the opportunity to pedal at our own pace. The day has been long but fulfilling, and the dusk hour feels introspective and especially rewarding as we descend in to Two Harbors, arriving just in time to grab a few needed provisions at the General Store before they close, rinse off in the coin-op showers, and enjoy a beachside libation with some fellow travelers- a father and son who had arrived here by sailboat several weeks prior and had decided to stay; a diverse cast of multi-generational extended family who had arrived here after completing a long segment of thru-hiking on the Trans-Catalina Trail. Two Harbors has that feeling of seclusion that speaks to nomads and isolationists alike, while offering just enough off-season amenities to understand how you could stay and just make this place work- if life were to call for a fresh perspective or a change in pace.

Camp comes as a welcome conclusion to our arduous day, and the yurt offers a comfortable shelter for the night. It’s been outfitted with a few thoughtful creature comforts in the form of cots, a two burner propane stove, Yeti cooler, as well as a Goal Zero battery to power a couple of LED lanterns in addition to our phones and cameras. We’re thankful that arriving to these amenities had provided us with the ability to pack a few less items for our travels. It’s not long after we’ve eaten a savory meal and shared a few laughs and recollections of the day over a moonlit beer, that we’re all fast asleep, eagerly awaiting the following day’s abridged window of opportunity to further explore the northwest reaches of the island. In the dawn light, as we’re reloading the bikes, the impending return to reality hits us all. Ideally we’d have another day to further explore the island and enjoy the opportunity to hang out together in such a memorable place, but a morning spin into the Harbor for coffees and then a few hours roaming along the coast, capturing a few final images and video segments is all we’ll have time for before we need to be back in Two Harbors, on the dock with tickets in hand, destined for the mainland, and that all-too-familiar routine. We waste no time in venturing out in the brisk morning air, to discover some of the more iconic, turquoise-hued shallow waters of coves and inlets lining the coastline. It’s easy to understand what brings maritime travelers to this place. We have the good fortune of spotting the inbound ferry as it comes back into the harbor, stretching each last moment on the island until we finally resign to pedal full-speed back to the dock.

It’s on the upper deck of the boat with the island disappearing in our rearview that we make the somewhat predicted pledge to make more of an effort to make these kinds of trips more routine. When you’re spread out from the people you care for, it requires that extra effort and intention to maintain those bonds and create those memorable experiences. Poignantly, Alex remarks, “that the hardest part is just getting out the door, and that after that, everything has the potential to be an adventure.” Our 36 hours on Catalina had appropriately reminded us of how true that is, and that putting the plan together, stepping out of the routine and getting out the door, is always worth the extra effort.