In my time working in shops that do custom builds and eventually moving into helping people outfit bikes myself, one truth prevails: bike builds are never straightforward. I usually recommend people start building their bikes about six months in advance of their trip. Ben had two.

A bike that’s going into the unknown needs to be well-thought-out, test ridden, and reliable before it gets packed up to take its rider into the deep. Ben would need to carry his filmmaking gear in addition to the usual self-sufficient solo camping stuff. We had to get riding quickly. We had to get a bike!

We took these photos back at home after Ben’s successful trip to the Andes. While it took more effort to recreate the final setup, I’m so much happier showing off the bike settled in after 10 days, 250 km, and 9,000 metres of climbing. Getting a Bike Going

With such a short timeline we got cracking quickly, and the first step was finding a bike. Ben was set on drop bars, but I knew he’d need the gearing and capability of a mountain bike. We needed a drop bar mountain bike. Having reviewed one for the site in 2016 and owned one in 2017, I knew the Kona Sutra LTD was a prime candidate. I reached out to Kona to ask if they’d lend us a bike for the project and they were into it.

Now that we had a bike, we had to get it to fit Ben and to get all his stuff to fit on it. We began by digging into our parts bins (aka the Vancouver bikepacking gear library) and pulled out a Porcelain Rocket Mr. Fusion seat pack and a Specialized Pizza Rack as well as our Ortlieb panniers. We’d zip tie a Wald 137 basket to the top of the rack and let Ben decide which other bags he’d like to use while he rode and got accustomed to the Sutra. 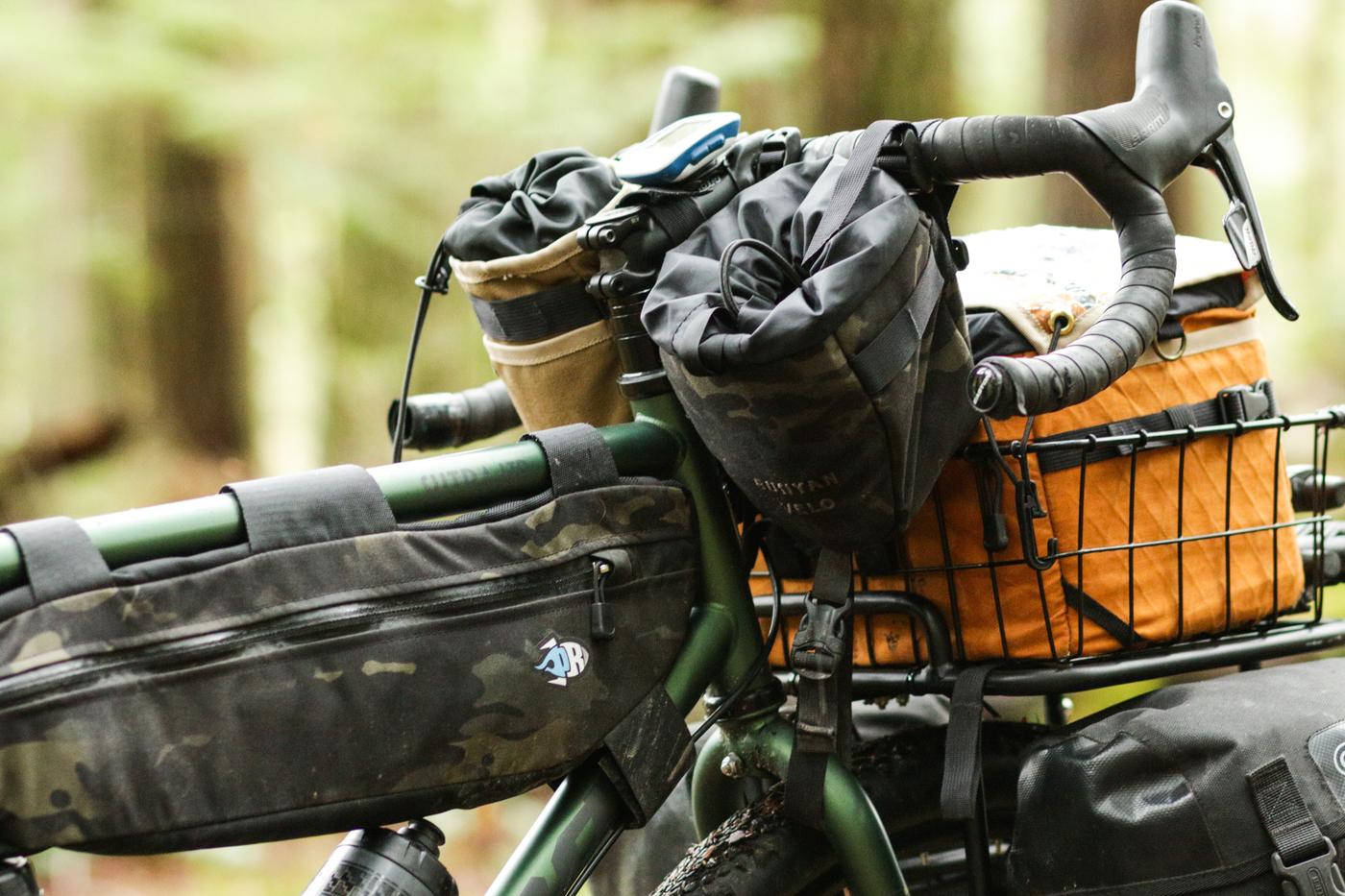 Ben intended to carry two Sony mirrorless bodies, two prime lenses, a small DJI drone, a handheld gimbal, and a whole bunch of spare batteries and memory cards – and hoped most of it would fit in an easy-to-access place that could be removed from the bike if needed. And, with the whole point of the trip being a self-shot film, Ben would also need a tripod.

As soon as I pulled out the Outer Shell basket bag, Ben was intrigued. The square shape, easy-access top flap, and movable dividers allowed him to customize the fit to accommodate all of his electronics safely. Since the bag isn’t waterproof, he lined it with a big dry bag to protect that stuff from the daily thunderstorms in the Andes.

Next up came the Porcelain Rocket mini slinger that I bought from Bunyan Velo, allowing one camera and lens to be available any time behind the stem. Ben liked the black Multicam and ordered his own Mr. Fusion and a half frame pack to match. We then added an Outer Shell Stem Caddy, which is bigger than the average stem bag, and that rounded out the packing setup. With the packing setup sorted and Ben with enough mileage on the bike to settle into it, it was time to dial in the fit. Running a tall bag in the basket makes for more likely interference at the hoods and shifter, so we went with a 46cm AX bar from Easton and ended up with a 100×10º stem to get the bars just high enough.

Since Easton’s now in the same building as Race Face, they also set us up with a 28 tooth chainring to pair with the Sutra’s 10-42 cassette and a pair of aluminum Aeffect pedals. I know it doesn’t really matter if these things match, but it sure comes out nice when they do.

Diving into our collection of bottles, Ben settled on a dark grey pair from Golden Saddle Cyclery and added a tool caddy under the down tube. Since the partial frame pack wasn’t quite as long as the big frame, we stuffed a spare tube in behind – a trick I’ve been using with partial packs ever since. 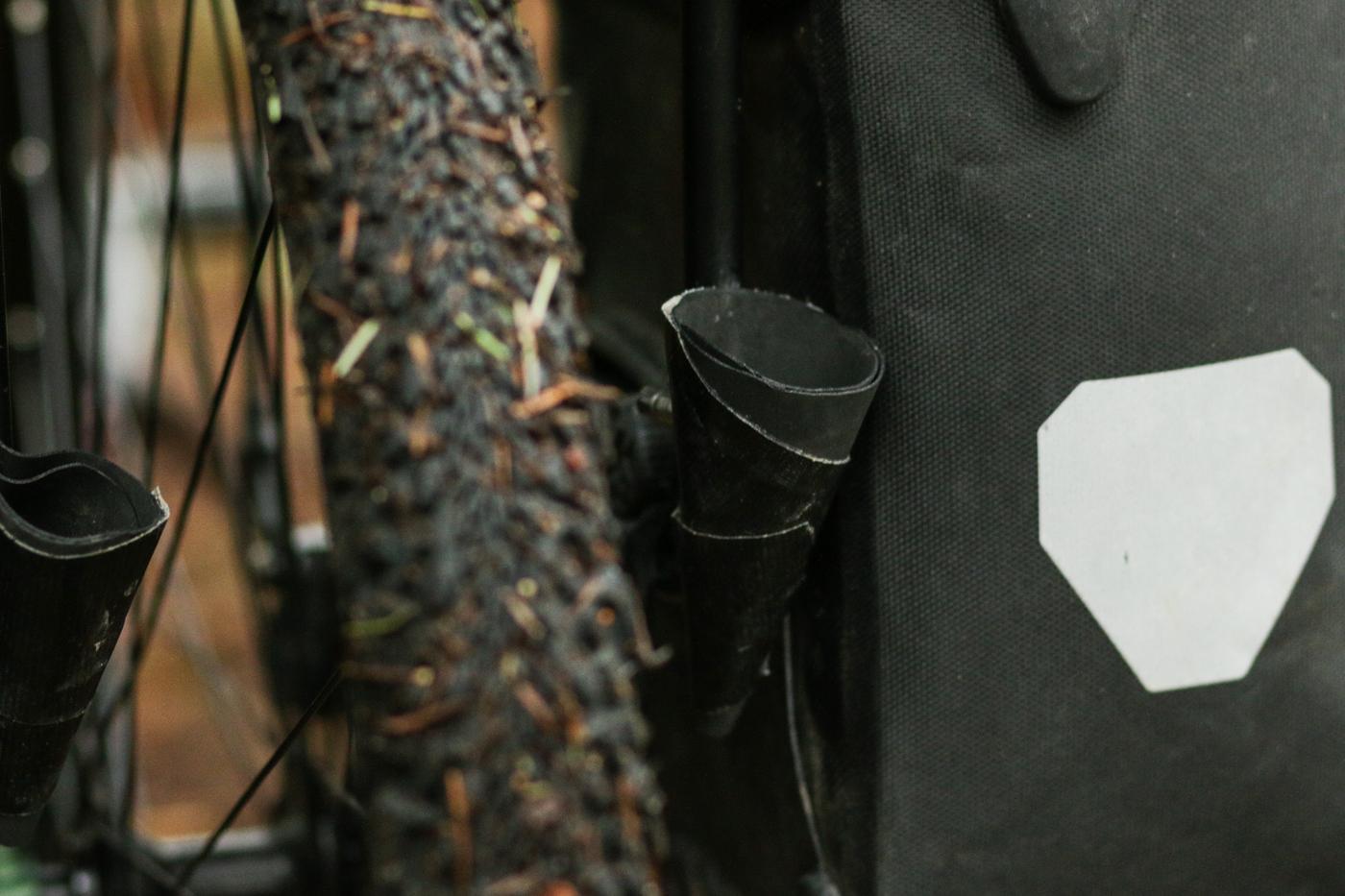 When I had my own Sutra, I became aware that the third bottle cage was positioned such that a large bottle would hit the front wheel. I solved this problem on my own bike by moving the upper hole on the cage to the lower hole on the down tube, and using a screw clamp to hold the lower half of the cage. It worked for me and it worked for Ben!

Another hack we pulled off turned out to be really nice for the visual side of the film. Ben wanted to be able to shoot back at himself while riding, so we mocked up a cone-shaped pocket to hold a tripod leg on each side of the front rack using gorilla tape and screw clamps. The third leg strapped back to the basket.

When Scott at Porcelain Rocket saw what we were up to, he gave Ben some sturdier material leading to a second version of the hack. And as you’ll see in the film, it worked wonderfully! In another future version, having a wider lens (Ben had a 20mm on his full frame) and having space to run the gimbal on top of the tripod would level this up again. 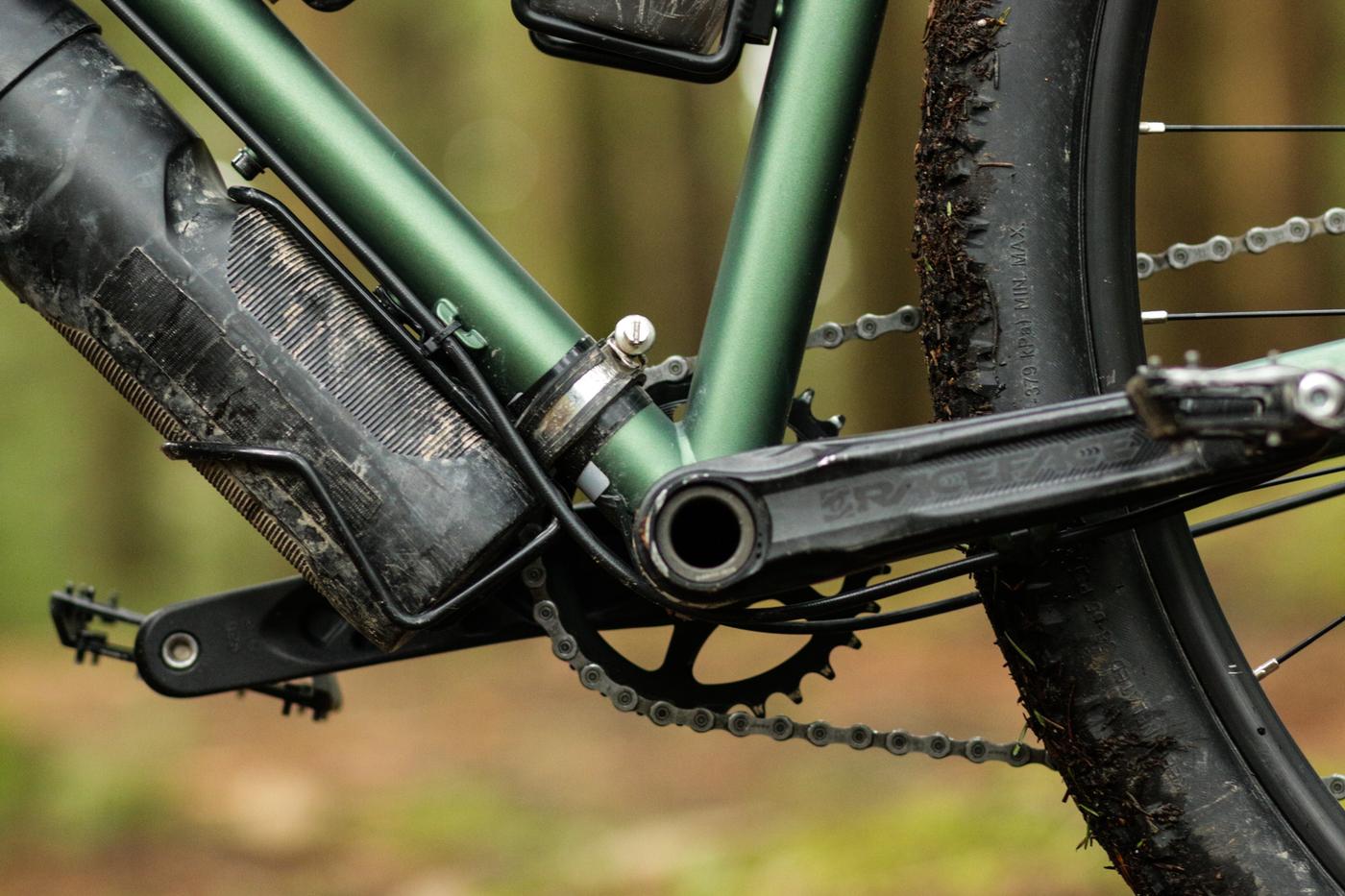 If I could go back and do it again, I’d get Ben an even smaller chainring and/or a larger cassette. Race Face makes Cinch rings down to 24! While a 0.67:1 low gear is pretty acceptable for mountain biking and dirt touring around here, the elevation and Ben’s heavy solo setup meant a lot of pushing still happened. (This also has me thinking for our upcoming kid hauler…)

The other thing we didn’t address, and which obviously didn’t turn out to be a problem on this trip, was the wheels and tires. On a longer term bike I tend to replace the rear hub with something I trust (insert your preferred rear hub here) and I would put a dynamo front hub on as well. The MSO 50mm tires did just fine, but something with a more durable sidewall would be good. The final question, then, is would we stick to 29″ wheels or move to a 27.5+ setup? I’m so happy Ben reached out to me to be a part of what became a passion project for both of us. It was fun to be part of this story from bike build to storyline – it was just the type of project I wanted to sink my teeth into. While I prefer for my own bike travel to be closer to home, it’s nice to have the chance to live vicariously through adventurous folks like Ben.