While we took a look at my own touring bike yesterday, I will say this with confidence: had I ridden the Elephant Bikes National Forest Explorer prior to ordering my Woodville two years ago, I would have drastically changed my views on 650b, disc brakes and trail.

The National Forest Explorer is a low-trail, 650b bike with disc brakes and a decent, not copious amount of tire clearance. These NFE’s are made by Glen Copus in Spokane, WA and pack quite the wallop of versatility in a beautiful, forest service green package. They’re made from lightweight steel for just the amount of liveliness. As Elephant describes the bike:

“The National Forest Explorer (NFE) is the ideal bike for long days of spirited riding on dirt roads. While designed to carry a small load over the wheel for day supplies, the NFE also handles well with low-riders and a rear saddle bag for overnighting. Unlike many heavy “adventure bikes” or “gravel grinders” sold by larger manufacturers, the NFE is light and responsive, built with a double-butted TrueTemper front triangle and 4130 rear triangle.

The geometry is optimized for experienced riders who prefer nimble handling and light steering input. The fork is brazed & lugged with a handmade direct-mount disc tab and a beautiful bend that helps soak up washboard roads.”

The NFE is alive. A beautifully-elegant specimen of the bicycle that dances with you on the climbs and lets you really lean into it while descending. While clearly its intent is to be a back country tourer, inspiring you to explore National Forests, we here in Austin, Texas have no such place nearby, so I took to exploring our local trails, State Parks and swimming holes. 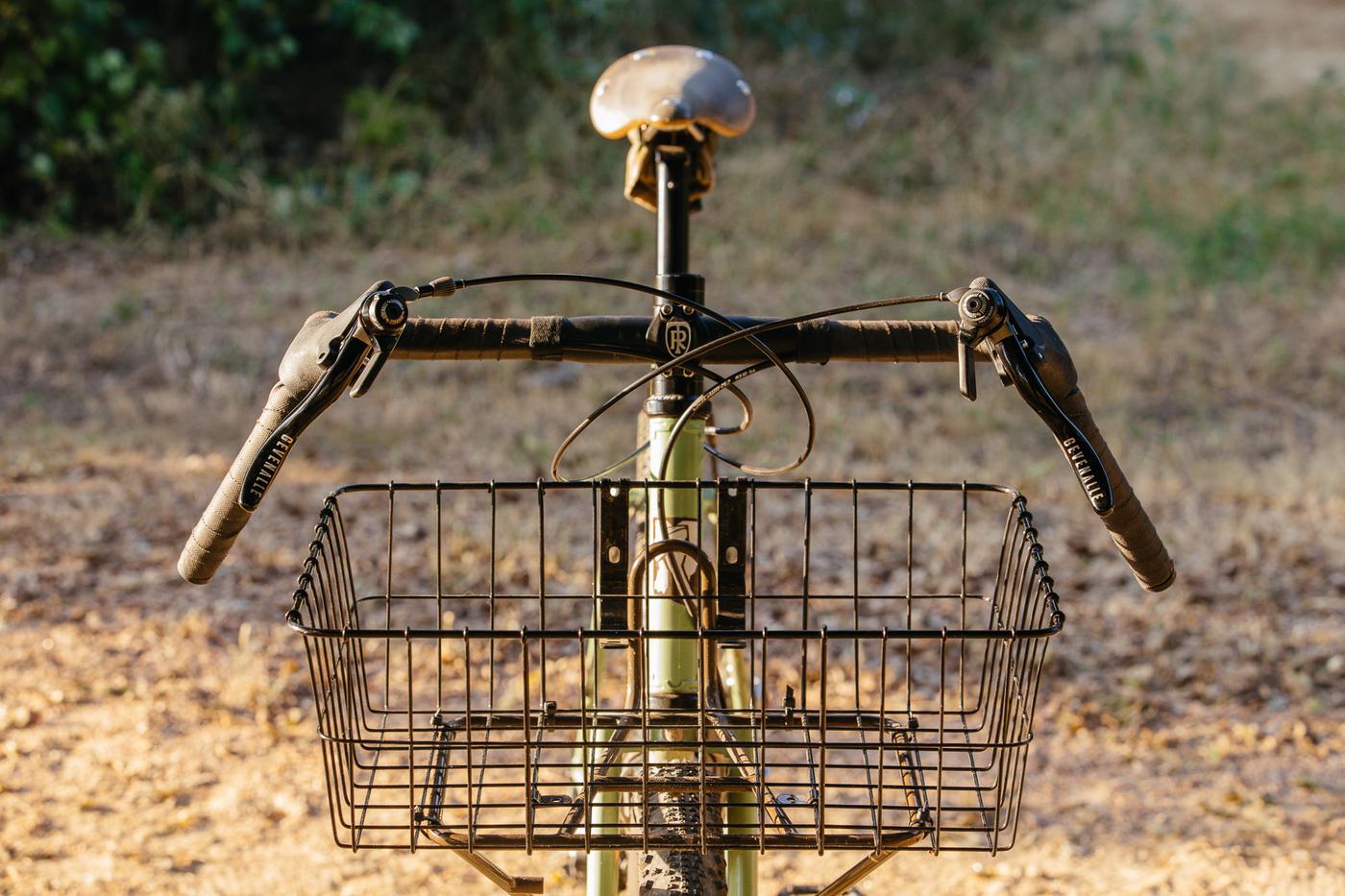 Arrival:
When the bike arrived here in town, it was spec’d with a complete Ritchey kit. Seatpost, some sort of Ritchey road bar, a stem and a saddle. I felt like a majority of the components didn’t fit the bike’s intent so I made a few changes. The saddle and post came off and on went a PAUL Tall and Handsome post with a Brooks C15. Then, in what was probably the boldest component switch, I swapped the road bars for Salsa Woodchippers. Then I attempted to wrap them with Brooks Cambium tape and after an hour of frustration, I accepted my horrible execution…

Having just come off the TDR with the Cutthroat, I liked the riding position the Woodchippers offered and since the NFE came with Gevenalle shifting, I figured it’d be a great time to test out a cockpit I’ve been considering for my own touring bike. When I realized how much room the bars offered, I fit a large Wald basket on the Haulin’ Colin rack.

The stem was ok and even though I found the size large NFE to be a bit long, all it took was a few millimeters of adjustment on the saddle rails to put it in a position that felt normal for me. Other than that, the build felt surprisingly adequate. Build:
I caught a lot of flak on Instagram for the “parts bin” build on this bike. One guy even said this bike wasn’t set up for shredding. I laughed at that comment in particular. This bike was made for shredding and the Woodchippers enabled that behavior more so than a set of road bars would. Yes, it’s built with a mix of lower-end Shimano components and it’s true, there is nothing balleur about the build that Elephant sent me but that doesn’t mean the bike wasn’t capable of being a blast to ride. In fact, nothing felt inadequate, or sub-standard. The hub’s engagement was fine, shifting was crisp and I never had to touch a barrel adjuster. Ah Shimano, you’re so good, even at the Deore level. That’s what a touring bike should be in my opinion: shit that works, is easy to find replacement parts for and any mechanic could service it. 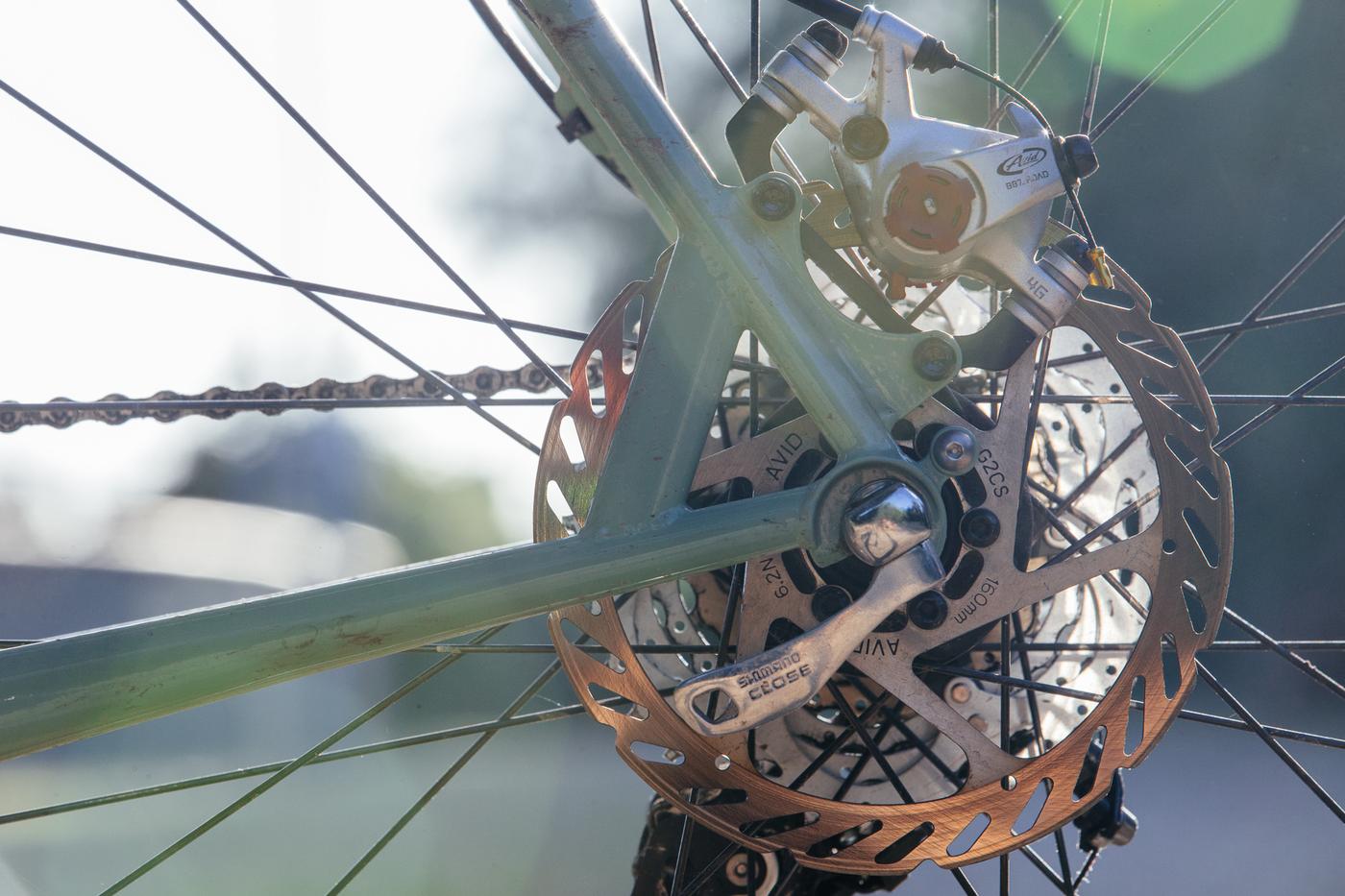 The only thing I would have swapped out, had the bike mysteriously disappeared into my stable would have been the Avid BB7 disc calipers. I really hate those things! … and maybe a generator setup. 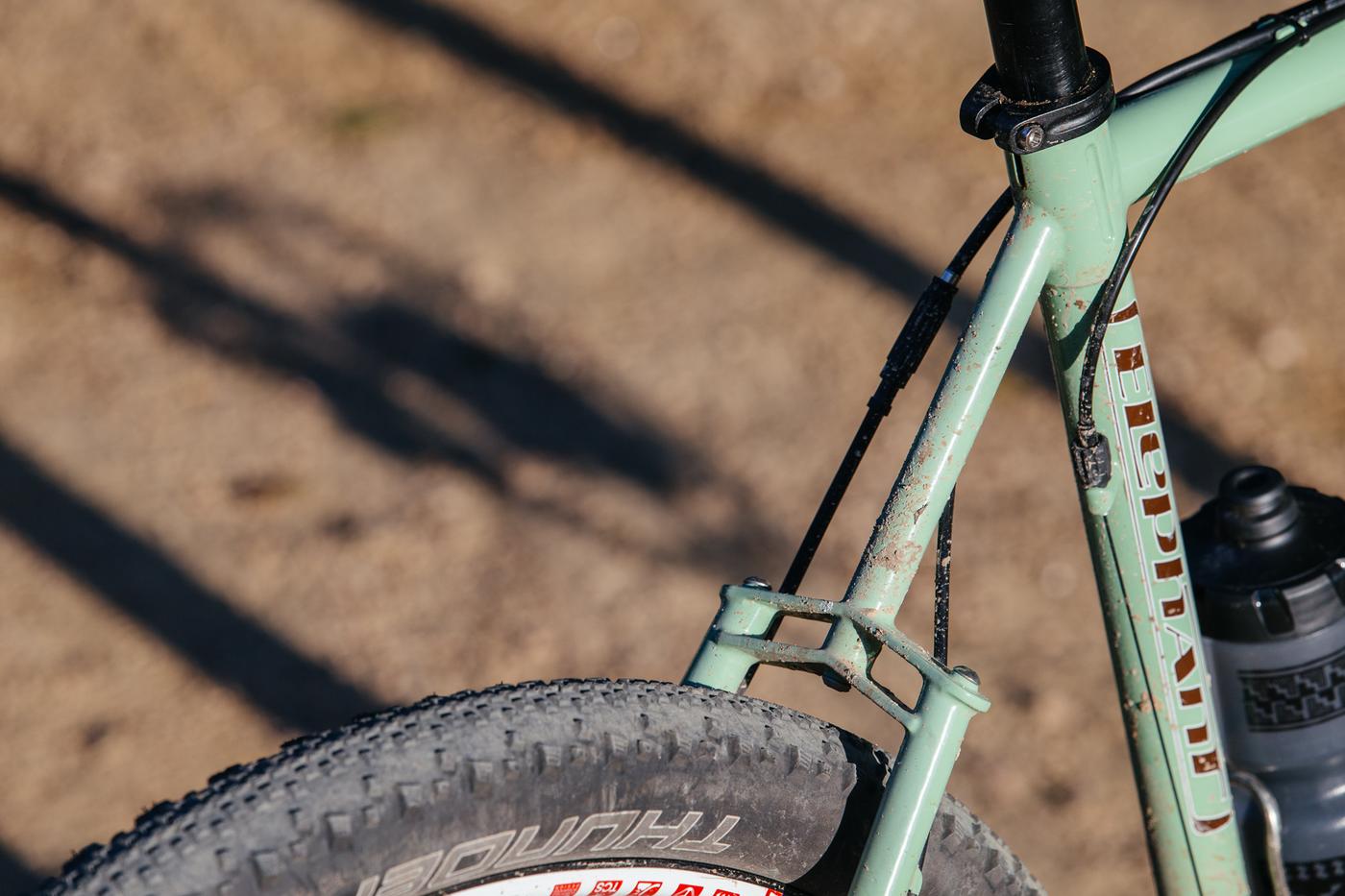 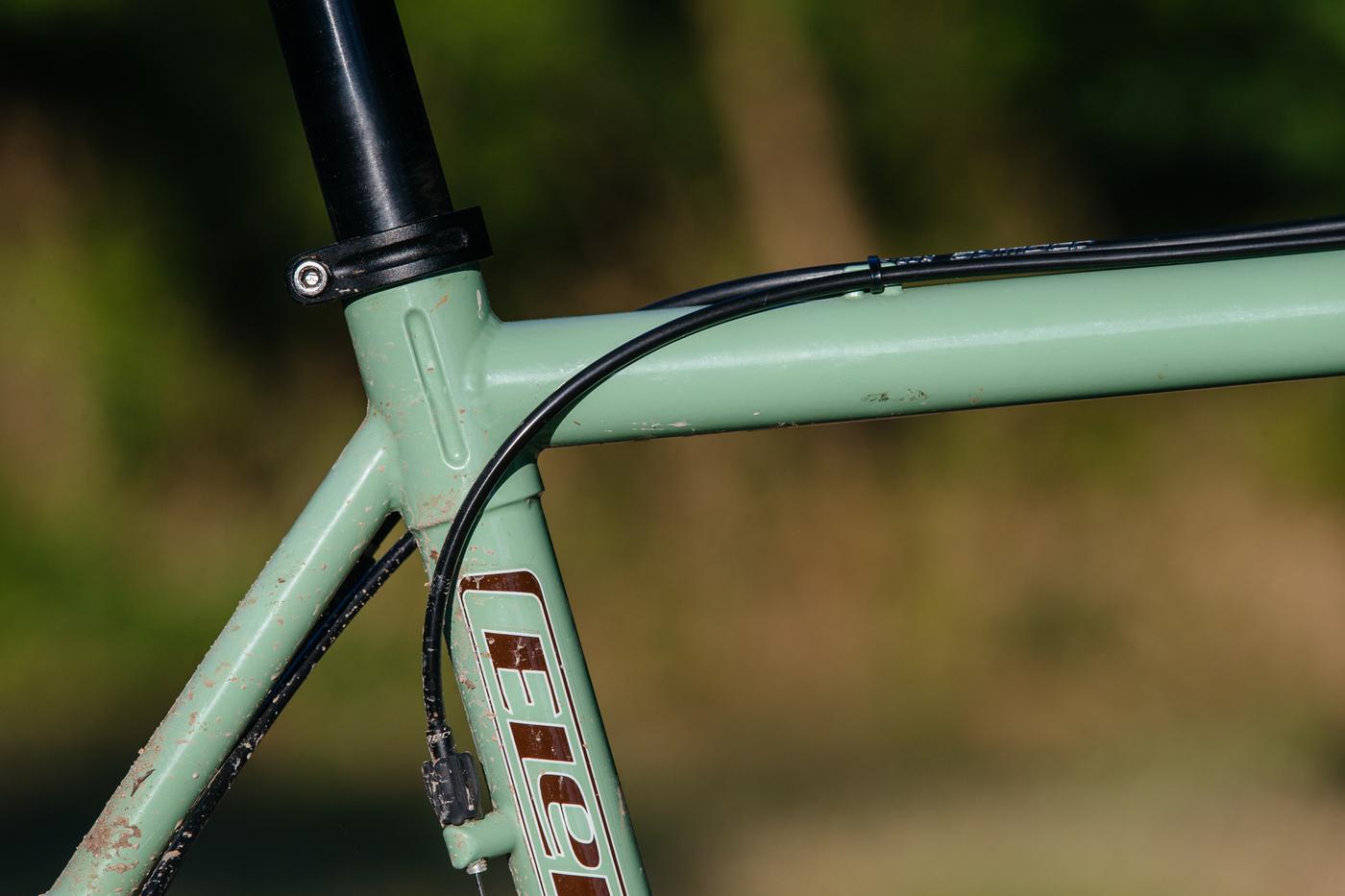 Even the attachment for the wishbone seat stay, an arguably difficult detail to execute in terms of frame engineering and longevity, was resolved in a smart, straight forward way. I feel like I see a lot of early builders weld or braze the stay directly to the seat tube with no reinforcement. Over time, I’ve seen these fail, but Glen simply sleaved a collar around the seat tube cluster, reinforcing this connection. Now, I’m no engineer, but it makes me feel confident. 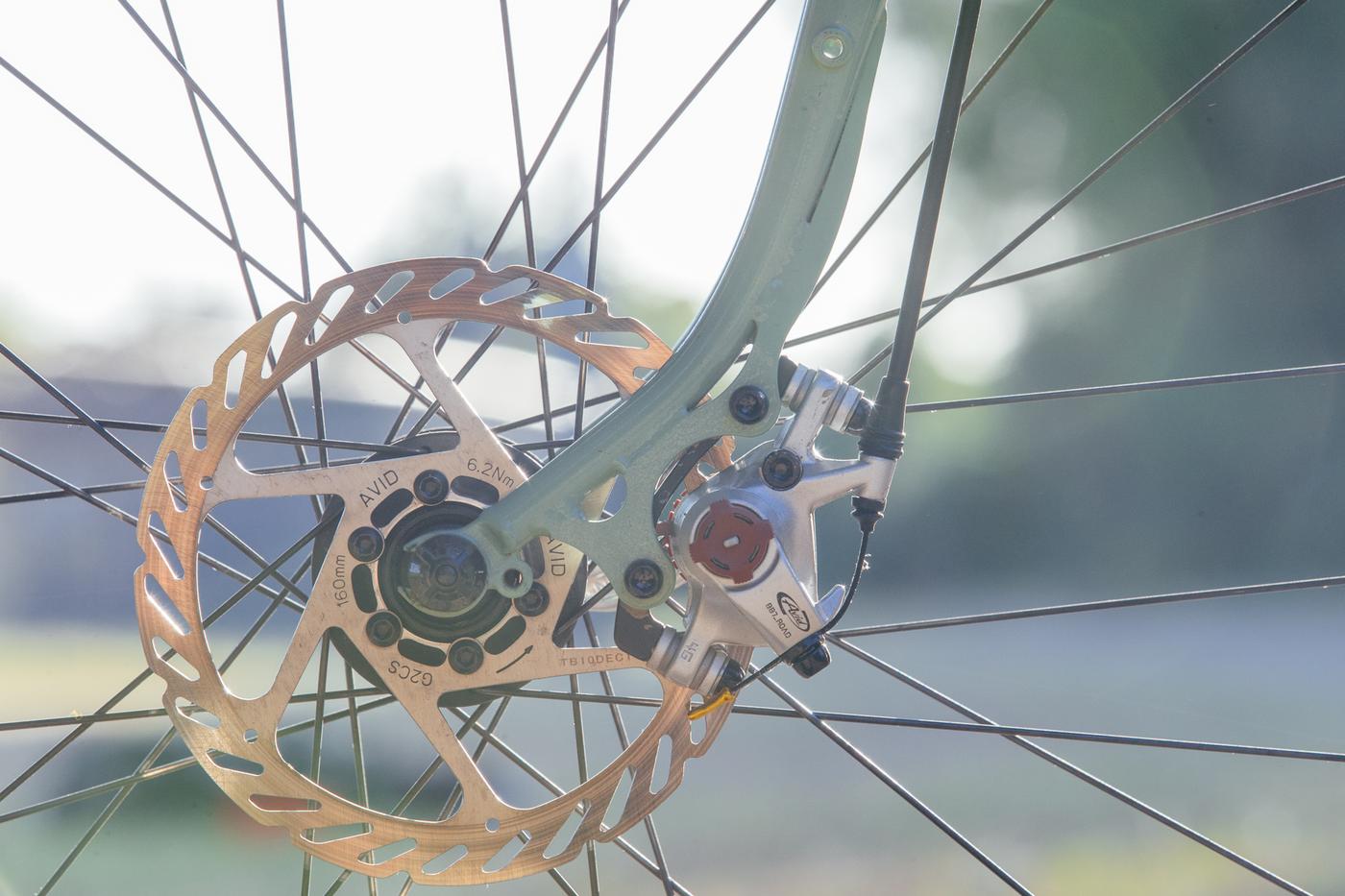 Another moment where I have no business commenting on due to my lack of engineering background is the reinforcement of the low-trail disc brake fork. I have no idea if this is a suitable reinforcement to avoid stress risers or not, but it delivers a stiff stopping sensation with no chatter or movement. It looks like the reinforcement moves up the blade enough to keep any stress risers from forming. Again, I’m not an engineer, I just see a lot of these and coincidentally, have seen what fails and what doesn’t. The head tube has two elegant lugs, or sleeves at the clusters, the fork crown has a rack mount and there’s even a pump peg. Truth told, I made it out all the way on my ride to shoot this thing, got to the trail at the right time of day and realized I forgot my Topeak pump. I figured the low-pricepoint build spec on this thing mandated a $50 pump, in lieu of the Silca pump I’ve been toting around. Rubber:
The Thunder Burt… the only tire from Schwalbe I’ve ridden that I can honestly give my thumbs up approval. Good on sealed road, good on gravel, with enough hook to catch even dusty and dry limestone corners. Good on you, Schwalbe. 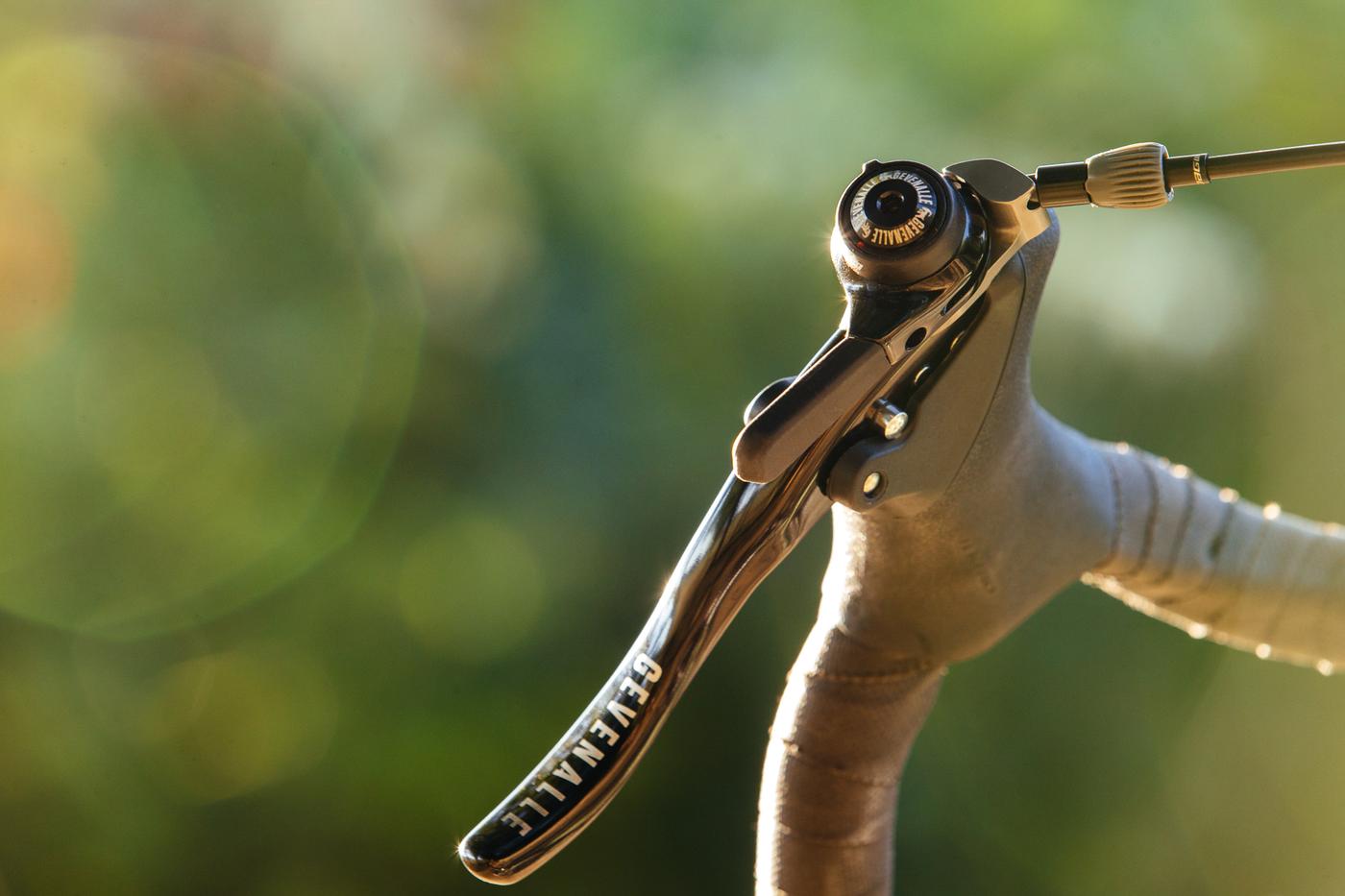 Shifting:
We’ll come back to this, tomorrow. ;-) 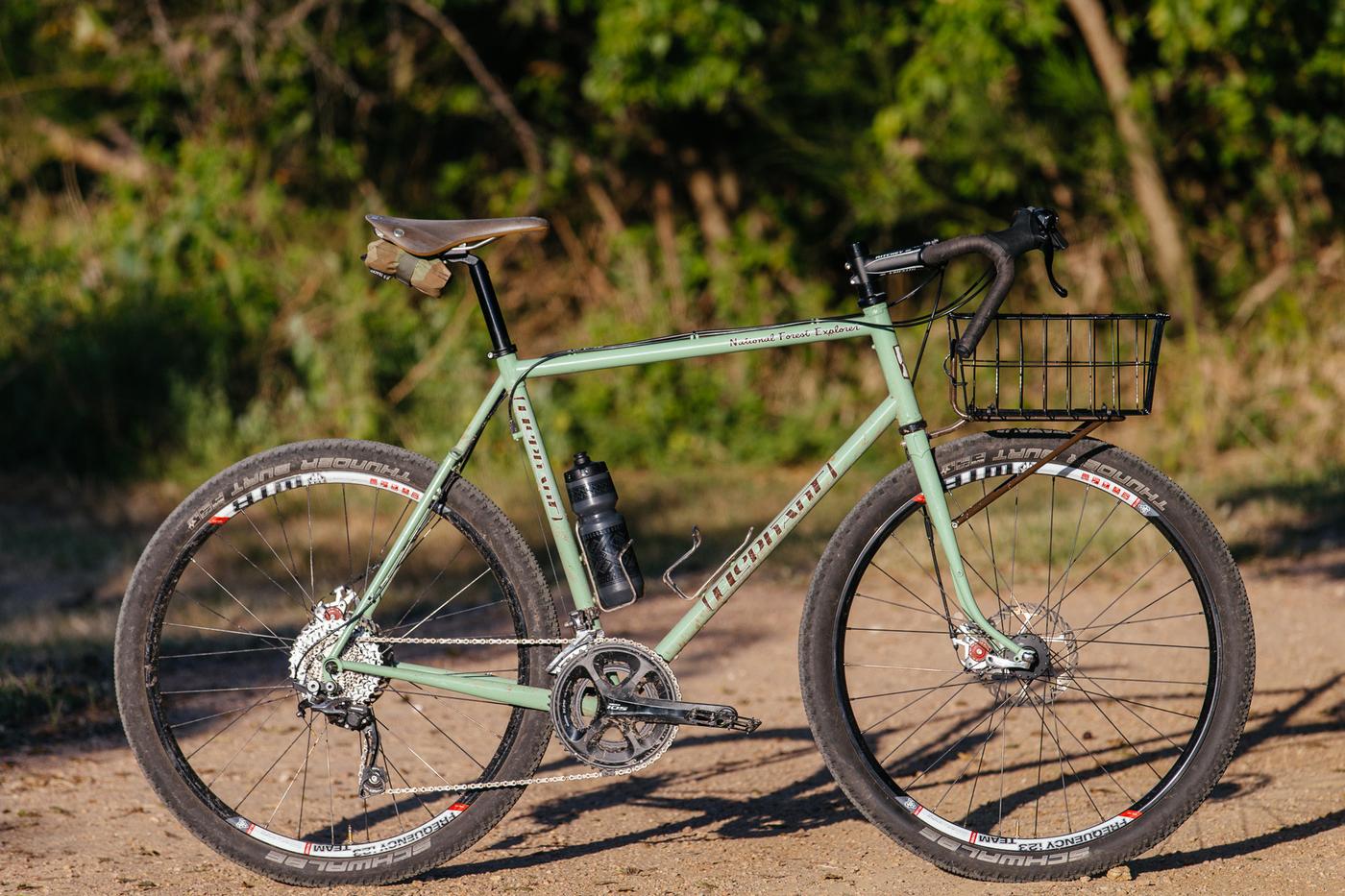 Overall:
The Elephant Bikes National Forest Explorer grabbed me from the get go. After a few trail rides, hauling shit to and from parks, swimming holes and even the grocery store I was in love. So much so that I was a bit upset to find that I had to send it back this week.

I’ve put in so much time these past few weeks riding it on and off-road, through the woods and between cars in rush hour traffic. The ride itself changed the way I feel about 650b low trail “rando” frames. I felt like it’s more of a rigid MTB with dirt drops than a randonneurring frame with MTB tires.

While I didn’t get to do any actual camping on the bike – I was planning on taking it to SF with me in two weeks – I did load it down as I would for a S24 trip and ride it out to a local state park to see how it handled. The NFE rides with confidence when loaded and still was able to be skidded through corners and pushed hard down descents.

The nature of the frame, with its good amount of flex feels so good with a bit of extra weight on it. One moment that did make me feel a bit concerned was when I was descending down a rather steep residential road, putting on my gloves with no hands and I did get a bit of speed wobble at the front end with the basket unloaded. More than likely this is just a by-product of the low-trail geometry and steepness of the road. I never felt it again, nor did I try to re-create that moment. Hands on the bars at all times, folks.

If I didn’t have a touring bike, I would have offered to buy this bike from Glen. It’s exactly what I thought I didn’t want, yet realized it was what I really needed after a few weeks of riding it. I cannot stress this enough. If you are looking for a made in the USA shred sled of a touring bike, the National Forest Explorer is for you.

This lovely machine comes in three sizes: small, medium and large. Check out the geometry chart at Elephant. It retails for $1285 (frame/fork) and can be built up for around $2200 complete. Holler at Elephant for more information and availability.