Try it and you’ll be addicted. Kalimotxo, the Spanish drink made from equal parts red wine and cola. It’s unexpectedly refreshing. For 2016, the latest rendition of Santa Cruz’s fabled Bronson came dressed in a bright fuschia color and named after this tasty beverage. Now, normally bright pink isn’t my color of choice, yet there was something so appealing about this particular paint scheme that actually made me want to demo the Bronson more than ever before.

Since its inception in 2013, the Bronson has been one of Santa Cruz Bicycle’s most successful bikes. Last year, it got a face-lift, which drastically altered its stance and updated the Bronson’s geometry to fit in with where the industry seems to be heading with its all-mountain bikes. In short: It’s the reigning champion of trail or all-mountain riding and in a world of slacker, lower and longer, actually defends its title quite well.

Having never actually ridden the older Bronson, I approached this bike review with absolutely zero preconceptions. In fact, I had very little experience with Santa Cruz’s 27.5 platform either, save for a few runs on a Nomad years back. As the industry proves however, mountain bikes from two years ago ride completely different than their more evolved brethren of today. When the offer came up to review a Bronson, I drank the kool-aid. Or in this case, the Kalimotxo. Introduction
For those who are unaware, or who have been hiding under a rock for the past three years, the Bronson is Santa Cruz’s all-mountain or trail bike. While many use it for enduro races, it’s older brother, the Nomad is a more fitting beast for that task. The Bronson is more of an all-rounder for those living in mountainous terrain where the trails are steep, rocky and fast.

The Bronson boogies thanks to SCB’s VPP suspension design and previously mentioned updated geometry. It’s a 27.5″ shred sled, packed with 150mm of rear travel and a 150mm up front. The rear end is wider, now measuring 148 x 12mm. Point it and go. Your hesitation is the only thing stopping this bike from doing what it does best: go downhill, fast. The Bronson comes in a number of build kits, ranging from $3,599 for the “C” grade carbon layup and XT all the way up to around $10,699 for the “CC” grade carbon with ENVE and XTR. This Bronson CC build lands around $10,099 with a SRAM XX1 kit and ENVE wheels. Expensive I know, and truthfully, I’d like to start reviewing the lower pricepoint buildout, which is where I think most people’s finances would direct them. But you know, it’s hard to say no to a completely blinged out bike like this… On the higher priced build kits, the Bronson comes with SCB’s 35mm clamp, 800mm wide bars. Whatever you do, do not cut these down. Ok, I guess if you really need to, go ahead but they’re my favorite all-mountain bars and I even put them on my Tallboy two years ago! 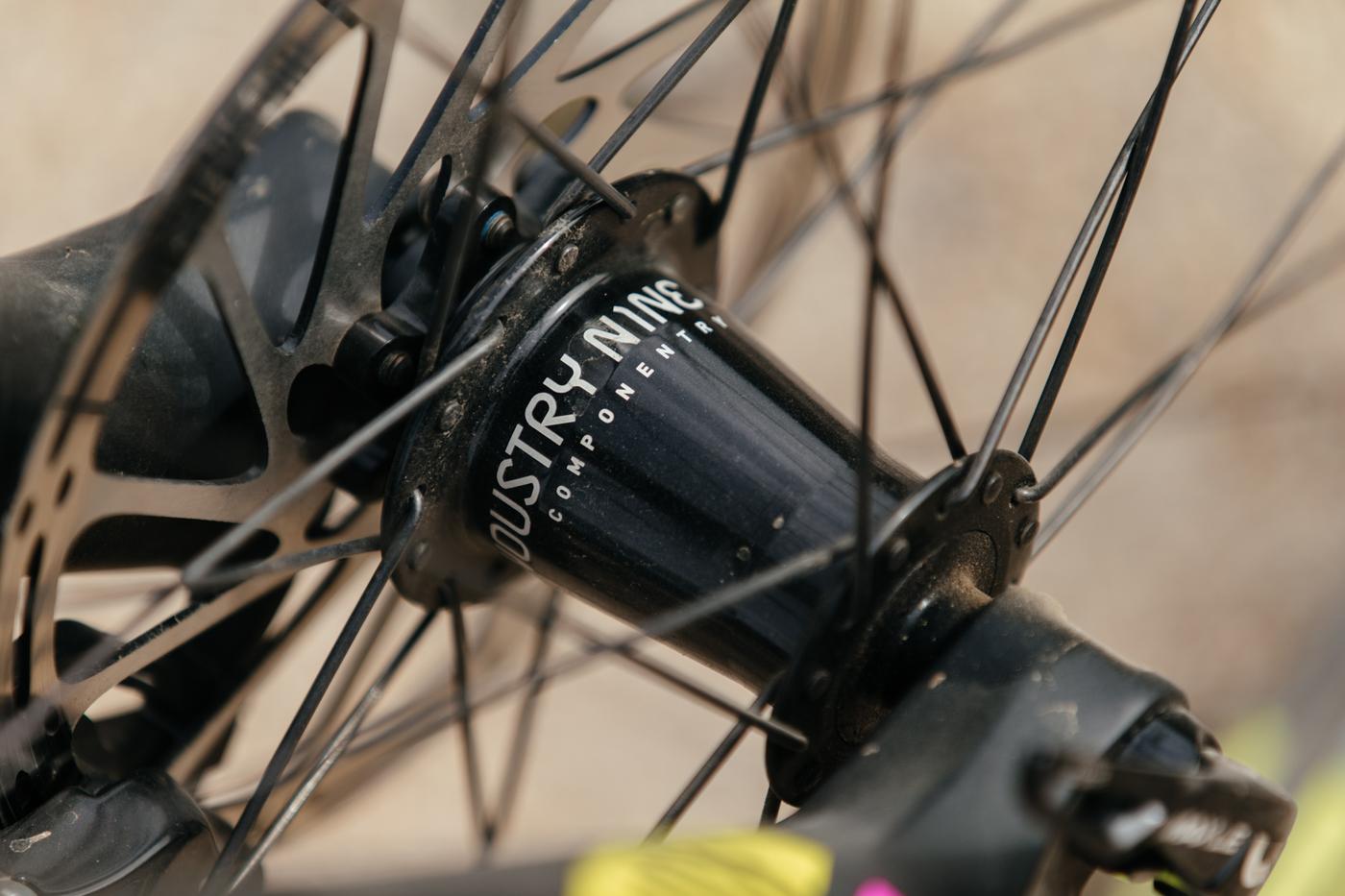 The best carbon mountain bike wheels come from ENVE and this particular wheel build features Industry Nine hubs, some of my favorite mountain hubs on the market. Coupled with those hard-as-nails ENVE rims, this is one sick, Made in the USA wheelset. Pricey? You bet. Worth it? Hard to say but they do ride like beasts! I’d even go as far as saying if you can pick them up second hand, you’re good to go. All the Squish with None of the Slop

Santa Cruz is known for applying the “whatever works the best is what’s spec’d” mentality. A lot of companies will spec their bikes with all Rock Shox, or all Fox, yet SCB has been known to mix and match components with what works best for their design. Even down to componentry. You don’t see a full SRAM kit here and in years past, SRAM’s drivetrains were mated with Shimano brakes, which has been addressed in this build spec with the new Guide brakes. This no-nonsense approach to spec’ing a frame makes for an ideal riding experience, especially when it comes to the suspension. 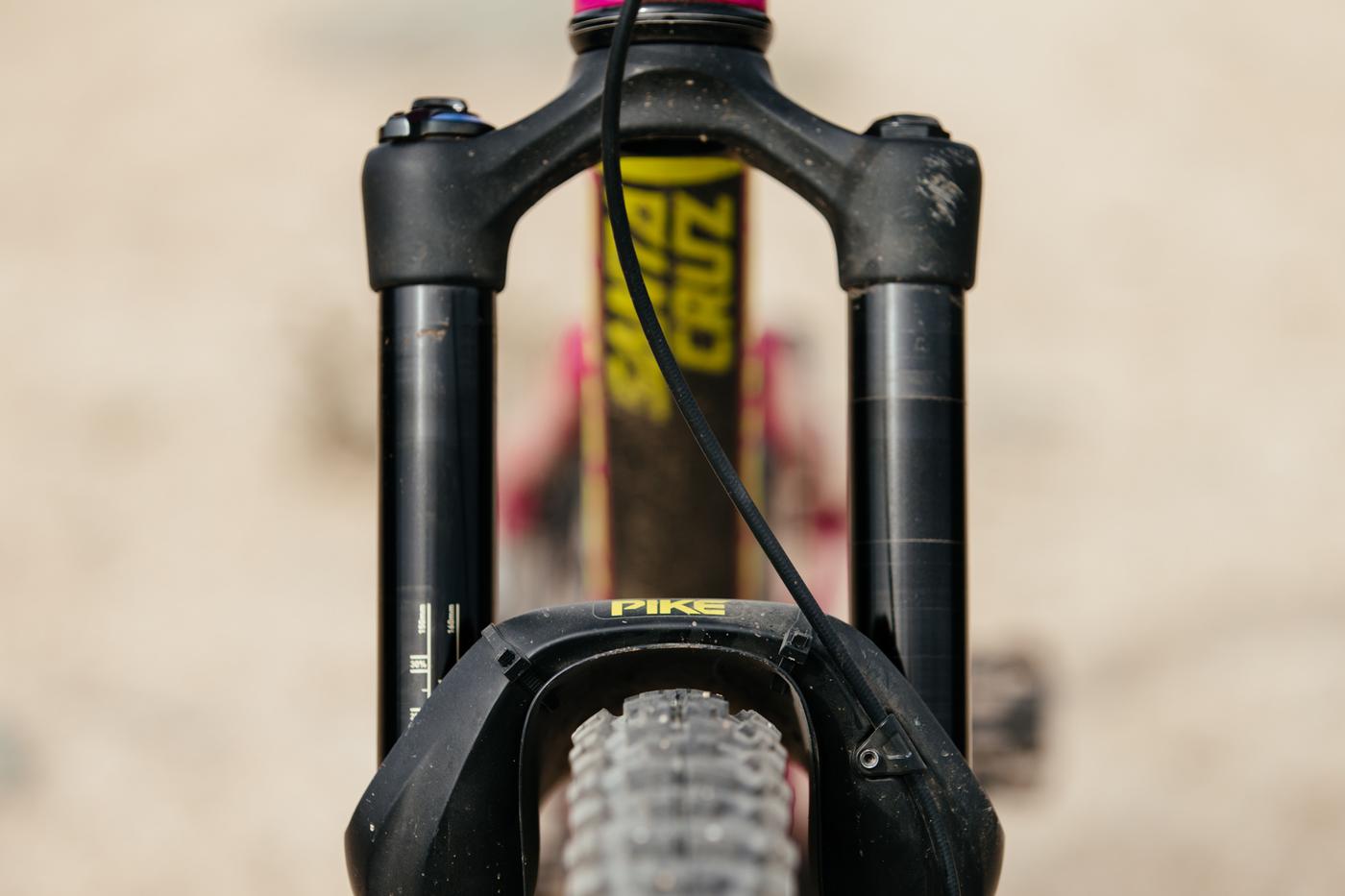 The Rock Shox Pike is still the best front fork I’ve ridden and while I’m not the most avid or experienced suspension expert, I’ll say with confidence that it was the fork that raised the bar for other manufacturers to attempt to match. That said, rear shocks are all over the place for me. An avid hardtail enthusiast, anything is better than being bucked all over the place in a rock garden, so I’ll leave the expertise to Santa Cruz’s specifications. For this build in particular however, Santa Cruz spec’d the Fox Float X shock with an Extra Volume Air Sleeve. When the VPP was redesigned, the Float seemed like a better fit both functionally and physically. Since the Bronson is an all-rounder, it needs to still be able to climb and traverse. This is where the rear shock really comes into play. The Float X with EVOL gives you a consistent feeling throughout your pedal stroke. The lockout is secure during your climb and with a flip of the switch, it opens up, delivering silky smooth suspension on the way down. 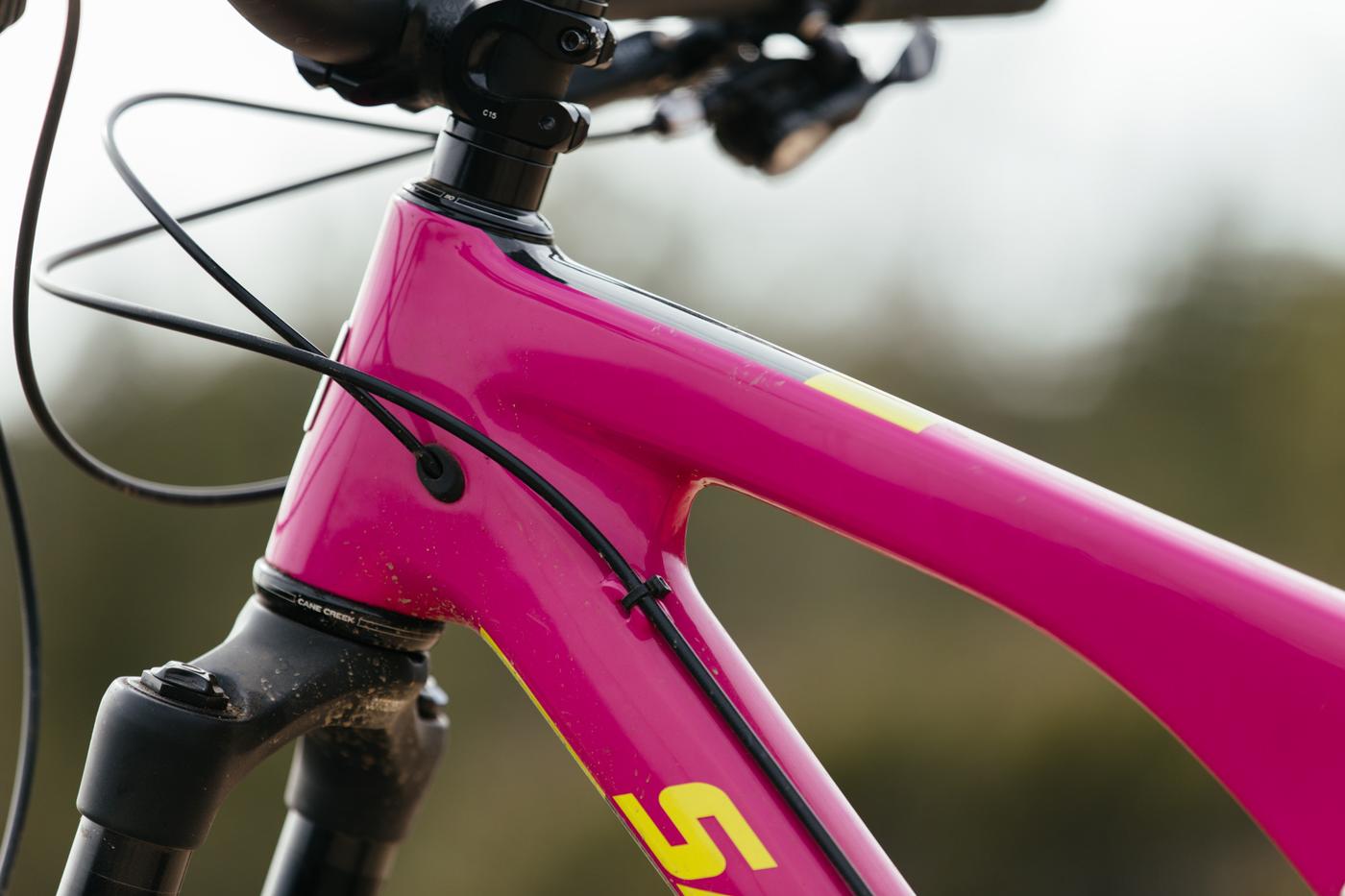 While that $10,099 pricetag might make you choke on your lunch, look at it this way: there is so much technology and engineering that goes into the frame alone, that it makes road bikes of equal pricing look like they’re the ones with the inflated retail. Just look at this bike and what it takes for the whole thing to move: pivot points, internal routing that is quiet for the most part, a threaded bottom bracket, the lower linkage got tucked in closer to the rear wheel, the upper linkage and the rear shock was relocated closer to the top tube. This redesigned VPP layout also opened up space for a bottle cage. Because, you know, why ride with a hydration pack if you can just throw a bottle in there? Best part, if you don’t want a bottle cage, you don’t have to run one but it’s nice to have the option. Speaking of which, even that front derailleur mount block doesn’t bother me. Hold Onto Your Butts

My first ride on this Bronson was in Santa Cruz, California. We rolled out from the factory doors and climbed into the UCSC campus. In years past, I’ve tackled most of these trails on a hardtail, and have never taken on the fabled giants atop a full suspension. Within the first few runs, I was hooked. As with all full suspension rigs, there’s almost a disconnect that occurs when you ride a technical trail but what’s lost with the bike’s contact is gained with the speed at which you can travel through the trail. Whereas I’d be a little more conservative with my lines on a hardtail, a bike like the Bronson just gobbles up everything like a football team at Golden Corral.

To Go Down, You Must Go Up

“Earn your descents!” “Fuck shuttle runs!” I love it when people speak so adamantly about mountain biking and when you think about it, it does kinda make sense. In certain applications. Now, no one wants to pedal a downhill bike up a fire road for 8 miles, but on a bike like the Bronson, I would do it without hesitation and in many occasions, I did just that. The Bronson climbs like a dream. In fact, it’s the best climbing full suspension I’ve ridden. It could be the weight of the damn thing (mine weighed in around 27lbs for an XL) or the redesigned VPP, OR the Fox Float. I’m not an engineer so I don’t know but I like the way this bike pedals uphill. You’d think with its new geometry, slacker, longer, lower, that it’d be a pain in the ass on tightly-wound trails but it’s not the case. You just kinda let the front end do its thing around turns and when you need to, you can still get over the front end just fine.

We’re On an Express Elevator to Hell, GOING DOWN!

In the words of Hudson, woooooooohoooooooooooo!

While the Bronson is an “all-rounder,” it excels at going down, very fast. Part of that is the geometry, some is the suspension design and specs, but ultimately, it’s your ability to just let go. With a 66° head angle and a 18.7″ reach on the XL, you’re riding in this bike, not on it. The ability to get low and slalom down peaty trails or slide across sandy rocks is built into its design.

Bikes like this were destined to descend. As previously mentioned, the mountains of Santa Cruz were where I shook down the Bronson. Everything from the steep fall line trails to the vertical rock gardens and jumps succumbed to this bike but it wasn’t until I took it home to Los Angeles that I really felt the difference. Everything was easier, faster and consequently, more painful when you overshoot or underestimate a line. Falling in the San Gabriel mountains is like falling on sandpaper. I scraped the skin from a lot of my appendages in the review period of this bike. 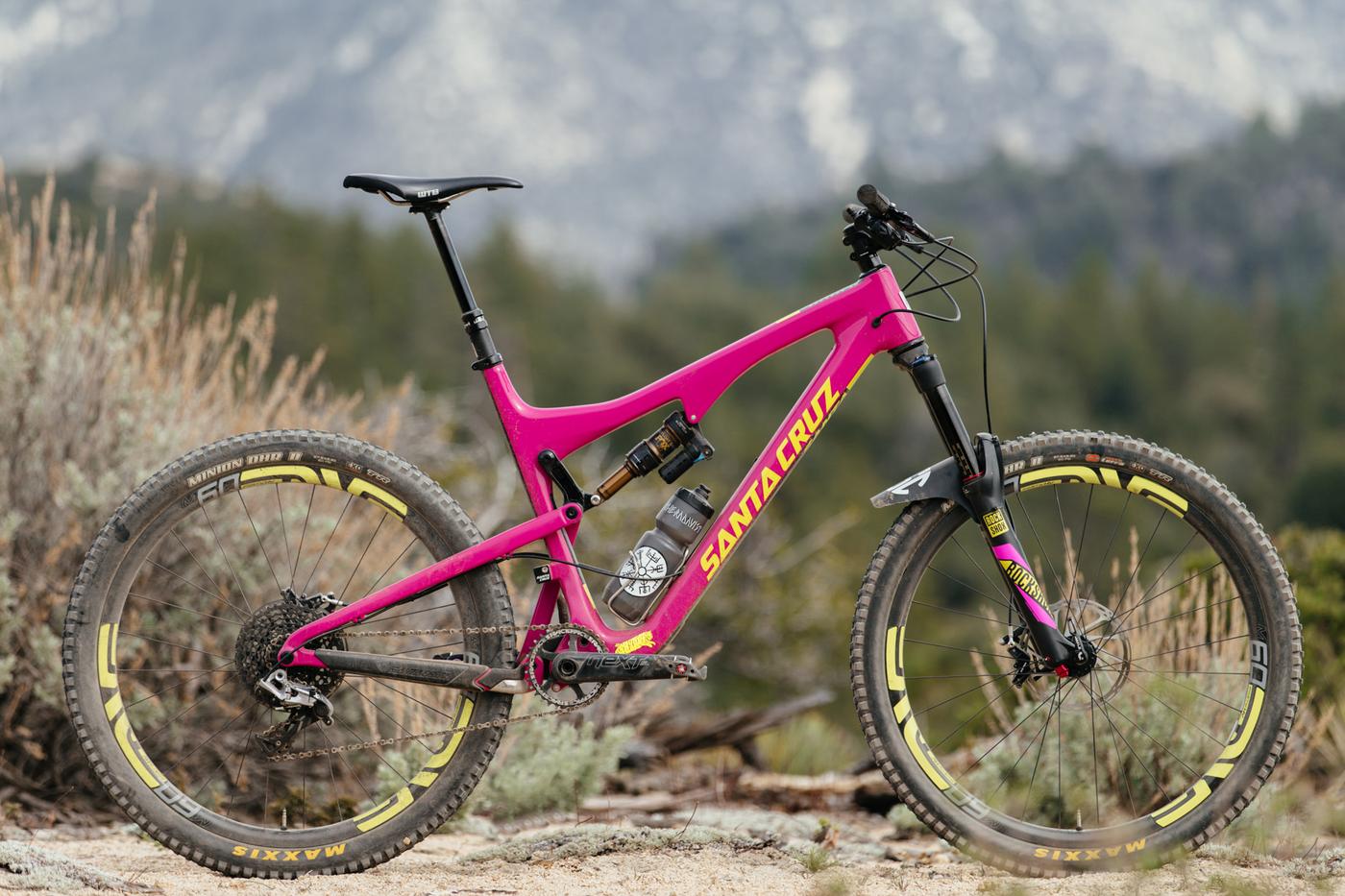 Is it Worth It?

It’s hard to merit dropping $10k on a mountain bike, especially all in one go. I doubt anyone reading this website is that balleur. Personally, If I were to buy a full suspension bike, I’d probably pull the trigger on a lower-end model with the “C” layup and slowly upgrade the parts as they needed replacing. Having owned a Tallboy for a few years and literally riding the shit out of it just about every day, full suspension bikes need maintenance and parts get thrashed quite easily. Your best bet is to buy what you can afford and be able to ride with a clear mind because no one wants to outrun debt on the trail… That disclaimed aside, if you’re considering purchasing the Bronson CC, it is by far one of the most capable bikes I’ve ridden. The team at Santa Cruz Bicycles really knocked it out of the bike part with this one.

See all the specs, details and pricing information that I missed at Santa Cruz and hop on a Bronson at your local dealer!

Care to correct or query me? Do so in the comments but go easy on me. ;-)