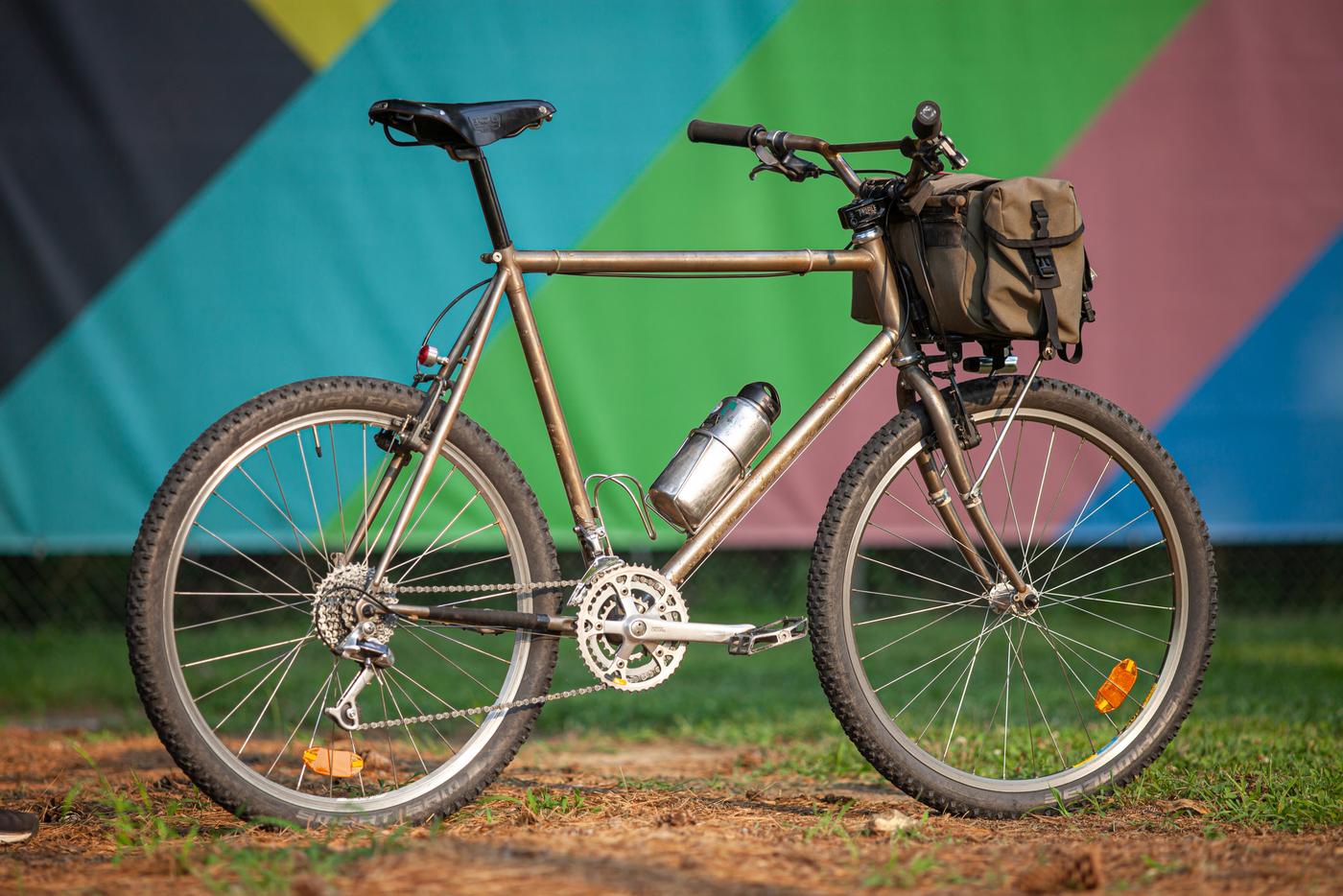 Originally built up, an early 90s Diamondback Apex was, according to a vintage DB catalog, a “workingman’s race bike.” It was affordable (+/- $800) and came stock with True Temper steel, a Deore LX group, and everyone’s favorite classic chunky tires, Panaracer Smokes. It was a peppy XC bike that welcomed a little zest during a ride. I mean, it is a classic 26er after all. There’s a reason why these bikes are popular again. They are sturdy, fast, and ready for a good time, even if you end up in a surprise endo every other ride. Do they replace a modern mountain bike? No, but if you love taking shortcuts through the woods on your way to and from work, or wherever it is that you go, they’re great. When Derek, who I will refer to as D from here on, first picked up this bike, it was sitting in a mosquito-infested scrap pile behind Back Alley Bikes in NC. So like any reasonable human being, he thought to himself, “FREE BIKE” and built it up as his primary touring rig. He kept it as original or period-correct as possible, welded disc brake mounts to both the fork and rear triangle, and took it all over the southwest, southeast, and some of that vast space in between. When a bike is good, you ride it a lot and love every moment. 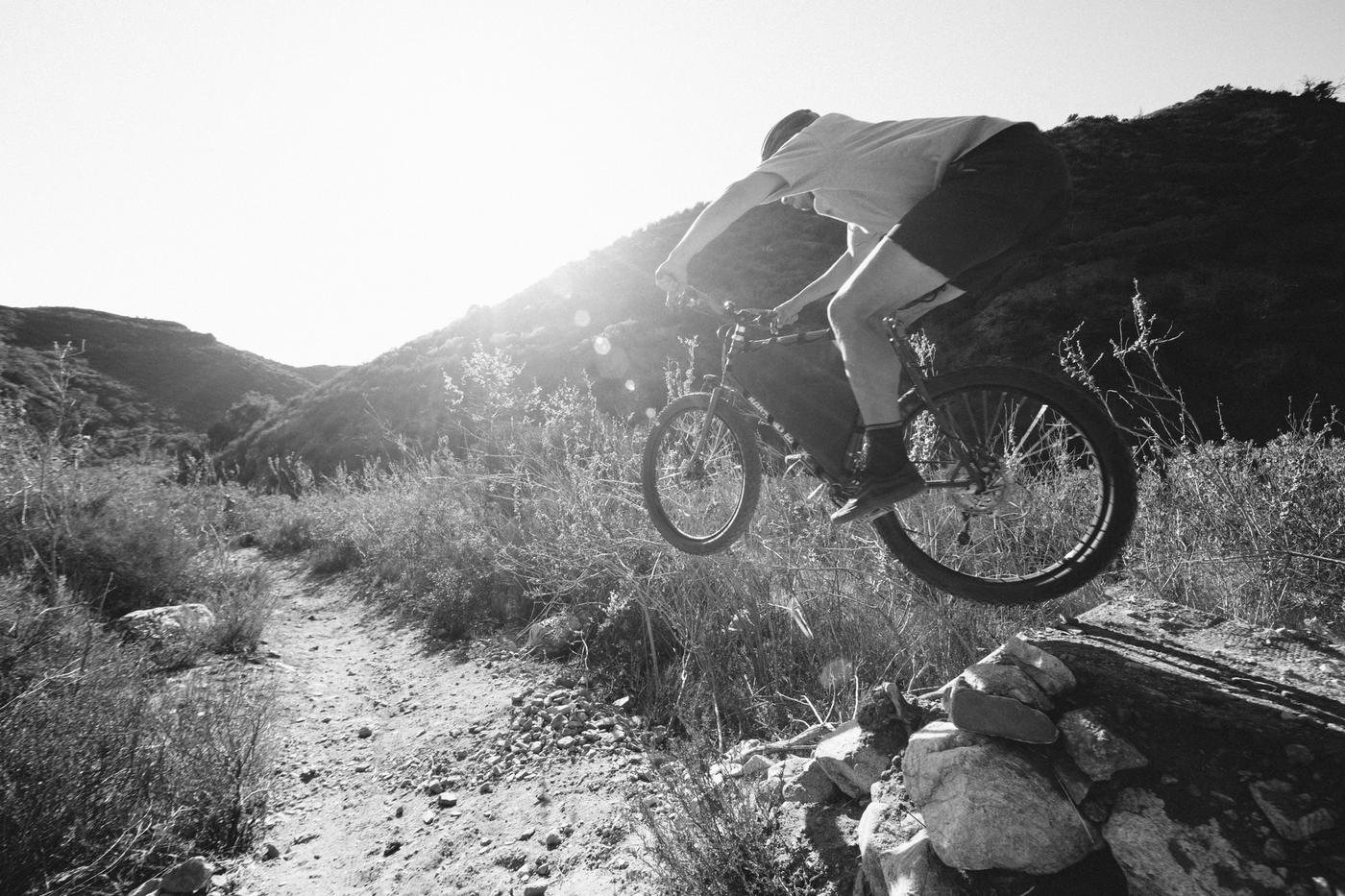 When a bicycle is great, it vanishes beneath you. This is what we all live for when we ride. But when you’re in those free and intoxicating moments, it is easy to forget the age and limitations of the very thing that is hurling you down a mountain at 30 mph. That’s how this bike met its fate. While riding in Angeles Forest a few years ago, D sent it off something a little bigger than the bike’s fork could handle, bending it out of alignment as if it was reinforced by a couple of pool noodles.

D was ok! He keeps limber with his daily bro flows. Motion is lotion! Wrecked and bummed, the bike was packed and shipped home, where it sat and collected dust for a couple of years until a couple of months ago. This summer, D decided that despite his best efforts in replacing the Diamondback, he could never get the same feeling he had while riding it with other bikes. So, he decided to wipe the dust off, replace the fork, strip the paint, and re-build it. He updated a few of the parts on the bike, went back to v-brakes, added a beautiful Monē handlebar, and gave the frame a fresh coat of bowling alley wax for some reason. 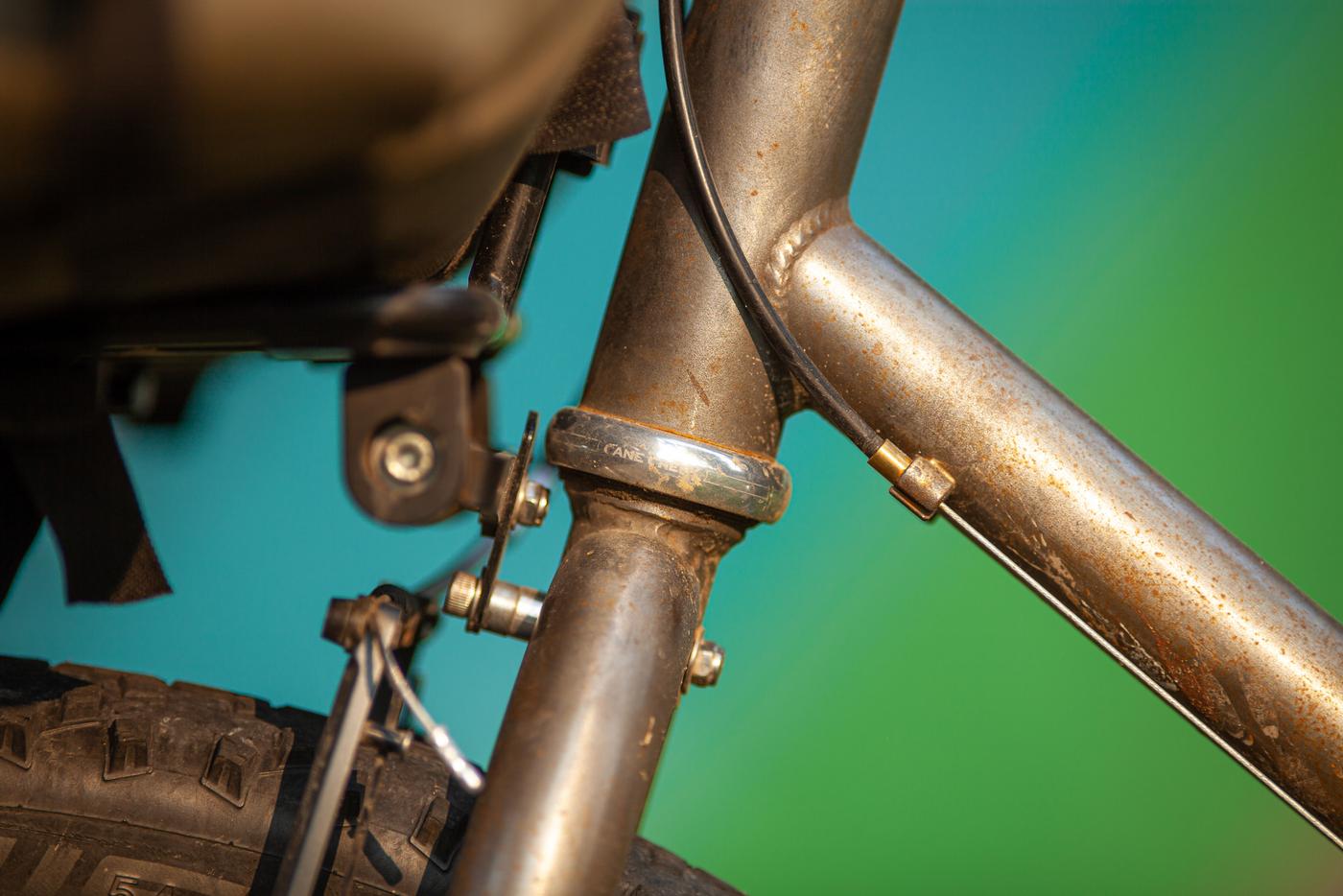 I am not sure what he has been reading, but I will say the wax does give it a nice semi-gloss sheen. So that’s nice. And there it is. Look at the photos. It’s just a bike, a great bike. See how happy he is? Get yourself a bike that makes you feel the way D feels in that last slide. That’s one of my best friends! I hope you all are getting to ride around with your best friends, healthy and vaccinated. 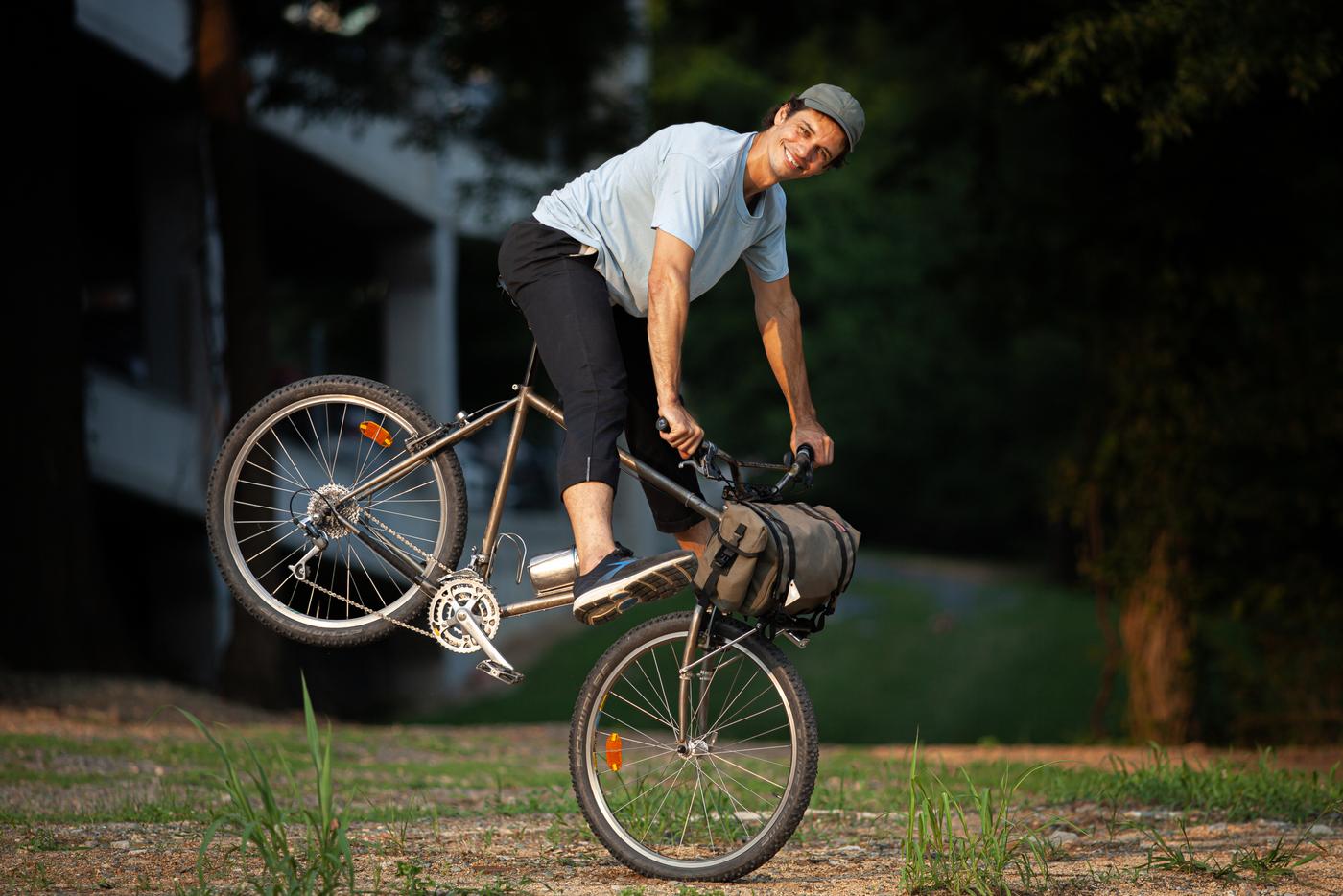 There,  I said it. Get vaccinated already so we all can get back to making stupid decisions with our friends while we still have a somewhat habitable planet. 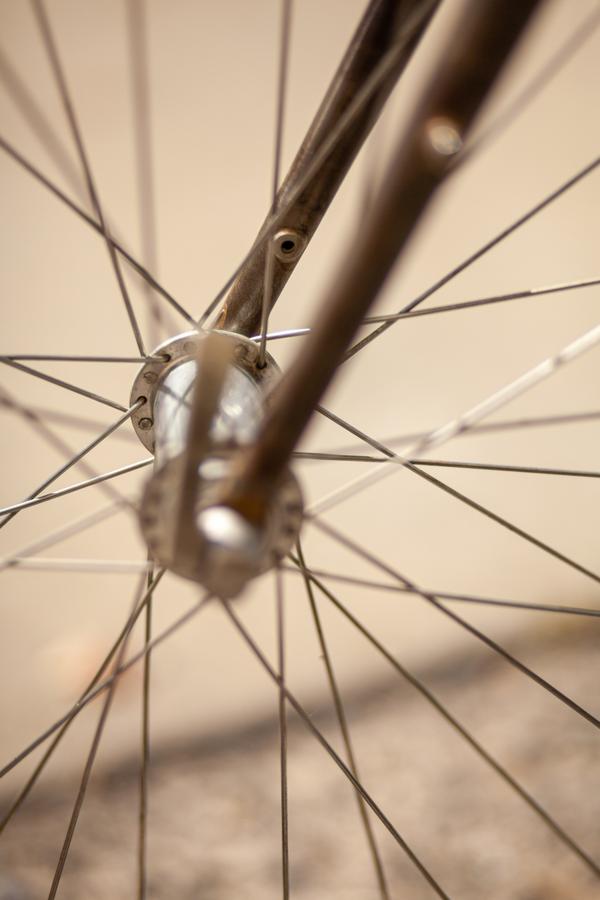 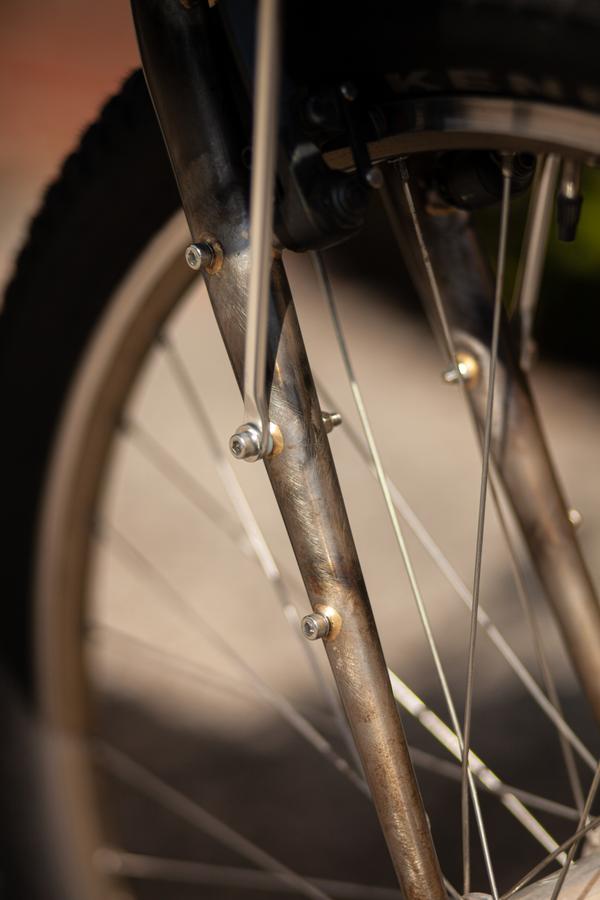 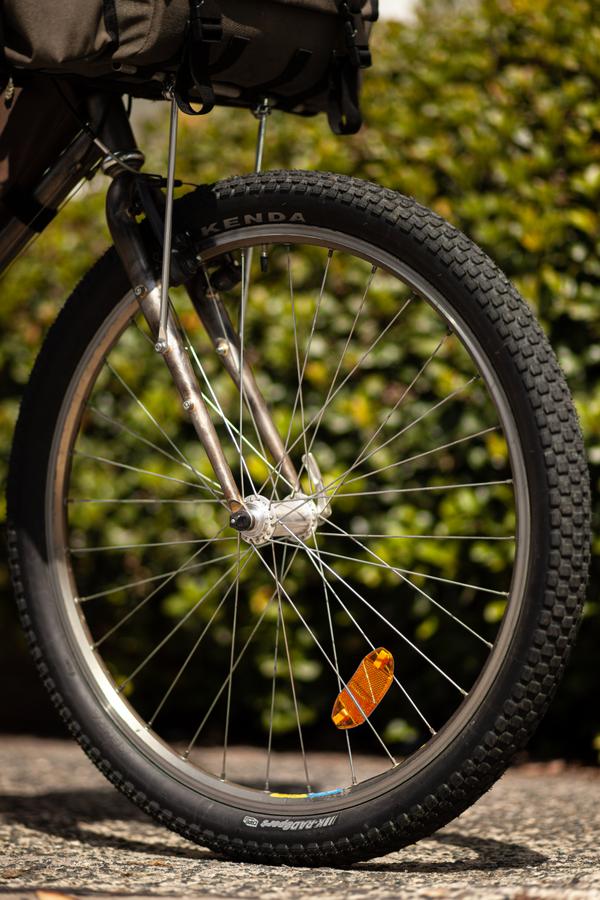 UPDATE: Sometime after I submitted the gallery of this bike, D upgraded the fork with a custom-built one from Darren Larkin. The last couple of images are of that and the bike’s current set-up.