For the past few years, a tale has been passed around within our circle of friends about cycling up White Mountain Peak. The story has changed a bit over the years, or perhaps the details have simply been refined, but what I knew was this: three of my friends rode, well, hiked their bikes up White Mountain Peak. A lightening storm hit, they had to vacate the vicinity and retreat to a car, which was waiting for them close to the top. All I ever saw were a few photos from the trip, but it was enough to whet my interest in White.

Fast forward three years or so and I’m now living in California, eager to explore this amazing state in the cooler months. I’ve mentioned to friends various times that I’m willing to take off during the week and do some of these rides that are a few hours drive from LA. Knowing good and well the climate window for the Inyo National Forest is slim, Eric Brunt invited me to accompany him on a return trip to White. Eric was one of the three who summited years ago, the other two you’re probably more familiar with: Ryan Wilson and Kyle Kelley.

That brings me to the background on this ride. White Mountain Peak sits at 14,252′. Still not as high as Whitney or Mount Williamson, California’s other juggernauts, yet it is the only one that you can ride, er… push your bike up to the summit. Hence the motivation with our friends, who are all a little loosely-screwed together if you know what I mean.

Just because we’re all a little crazy, doesn’t mean you’ve gotta make yourself the same in planning this ride, so I’m trying something a little different with this Reportage… There are options for ascending White Mountain Peak by bicycle, yet each are limited by a few conditions. The first and most important tidbit to know is that there is no water on the mountain. Anywhere. Unless you happen to come across some researchers at the Barcroft Station, and they allow you to fill up your bottles or bladders from their glacial melt reservoir. That’s at a whopping 12,470′ though. The solution: one of those giant water jugs from REI or an army surplus store – if you’re car camping somewhere on the mountain. Otherwise, drive up and do water drops until the gate at around 11,000′. Or just bring approximately 4 liters of water with you if you end up doing our route.

Once your water situation is figured out, perhaps you should think about where to start your ride. Grandview Campground sits at 8,500′. Sleeping there the night before will help you acclimate to the elevation. Some sadists will begin this ride from Big Pine – which sits at 3,700′. I might be loosely screwed together, but I’m not that dumb. Eric and I camped at 8,500′ and planned on riding at a steady, yet social pace. I wanted to shoot photos and Eric, having done this ride before, knew that slow and steady meant we’d remain intact emotionally and physically. After some back and forth, we opted to start at the Visitor Center which sits at 10,500′, providing us with a 48 mile round trip with around 8,800′ of elevation.

A few other notes: You should be mindful of the weather. There is no shelter at the top and things can get nasty. Fast. My GPS watch has a storm alarm that went off a dozen or so times on our ride back. If it looks shitty at the peak, do not proceed… Some people ride all-road or cyclocross bikes, others mountain bikes. I’m talking full suspension carbon trail bikes. There isn’t a right or a wrong bicycle for this ride. It’s all about how much you’re willing to compromise. Since it’s not a straight up, and straight down route – there’s actually a ton of ascending and descending going both ways – it’s all about what you’re comfortable riding downhill more-so than uphill. It doesn’t matter what you’re on when you’re climbing washboarded and rutted roads, but shit gets old descending realllll quick on a road bike.

At the time when my friends did this ride first, Eric was riding a canti-brake Ibis Hakkalugi with standard cyclocross gearing, Kyle rode his SpaceHorse and Ryan was on a hardtail. This round our equipment wasn’t all that different. Eric would ride his Speedvagen Rugged Road with Di2 and I would ride my Independent Fabrication rigid 29’r with flats and hiking boots. My thoughts were, I’d benefit from having actual hiking boots once we hit the 12,000′ mark, the moment when arguably the elevation hits you and suddenly, you notice the peak of White Mountain staring you down. I had a 3L water bladder in my frame pack, which I drank all of. I rode in shorts, a merino shirt and a Mission Workshop Faroe hoodie. With hiking boots. Strapped to my saddle rails was a rain jacket in case the weather deteriorated. Food and clothing filled the rest of the space up. 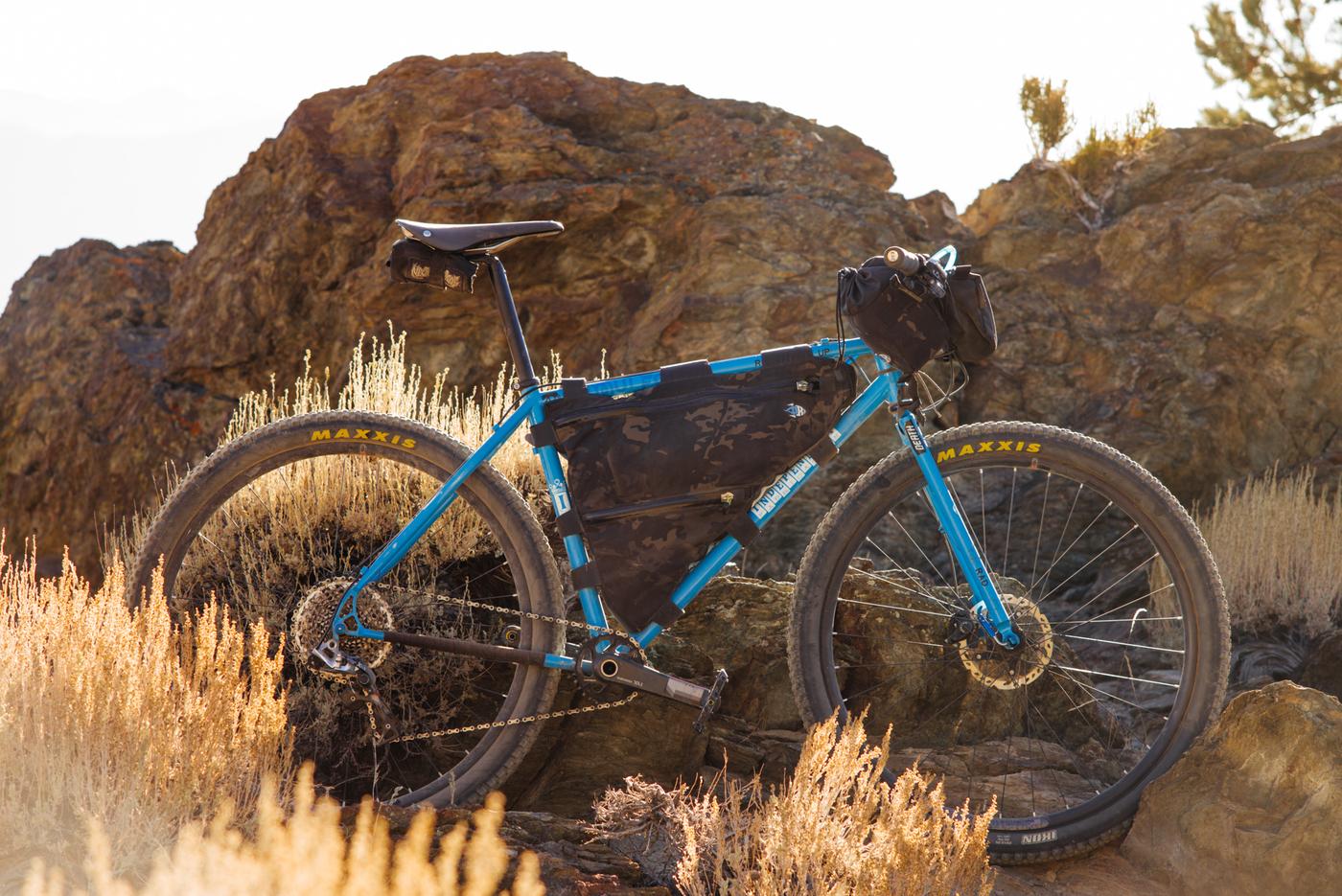 Speaking of, you’ll need to bring a lot of food. Not just bars, but actual food. Preferably “wet” food. Dehydrated foods like bars and even bread can pull water from your body to digest. Studies have shown that even with bars, your body can’t use the nutrients for over 14 hours. Eat simple foods like fruit, nuts or a sandwich. Sugars help too. Feast on easy-to-digest and high energy snacks. 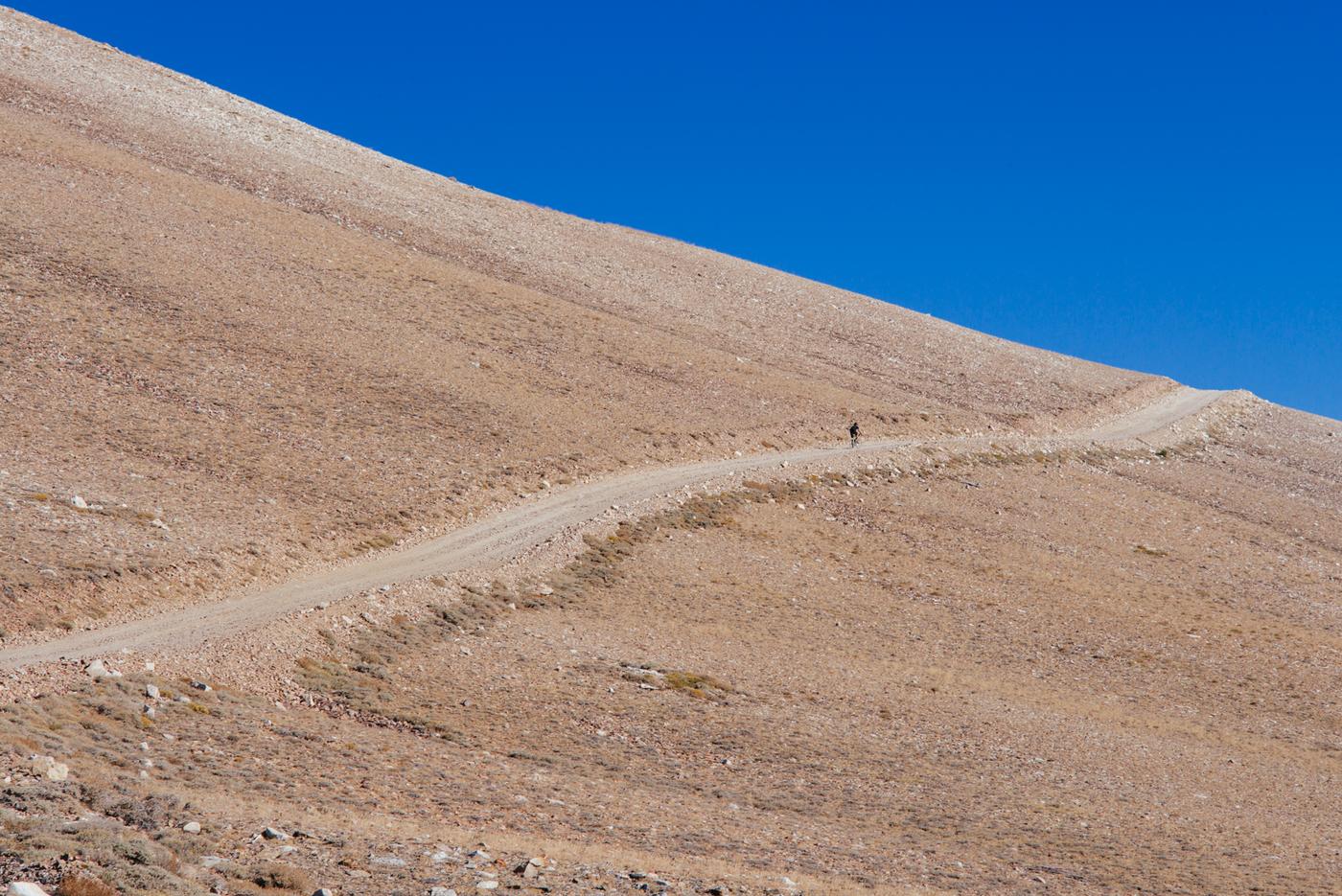 There are options to go up and down White, yet we chose the most straight forward. We took White Mountain Rd all the way up. You could ride up White Mountain and go down Wyman Creek, or the Bishop 4×4 road. Both of which look hella fun, but we decided to leave those for another trip. 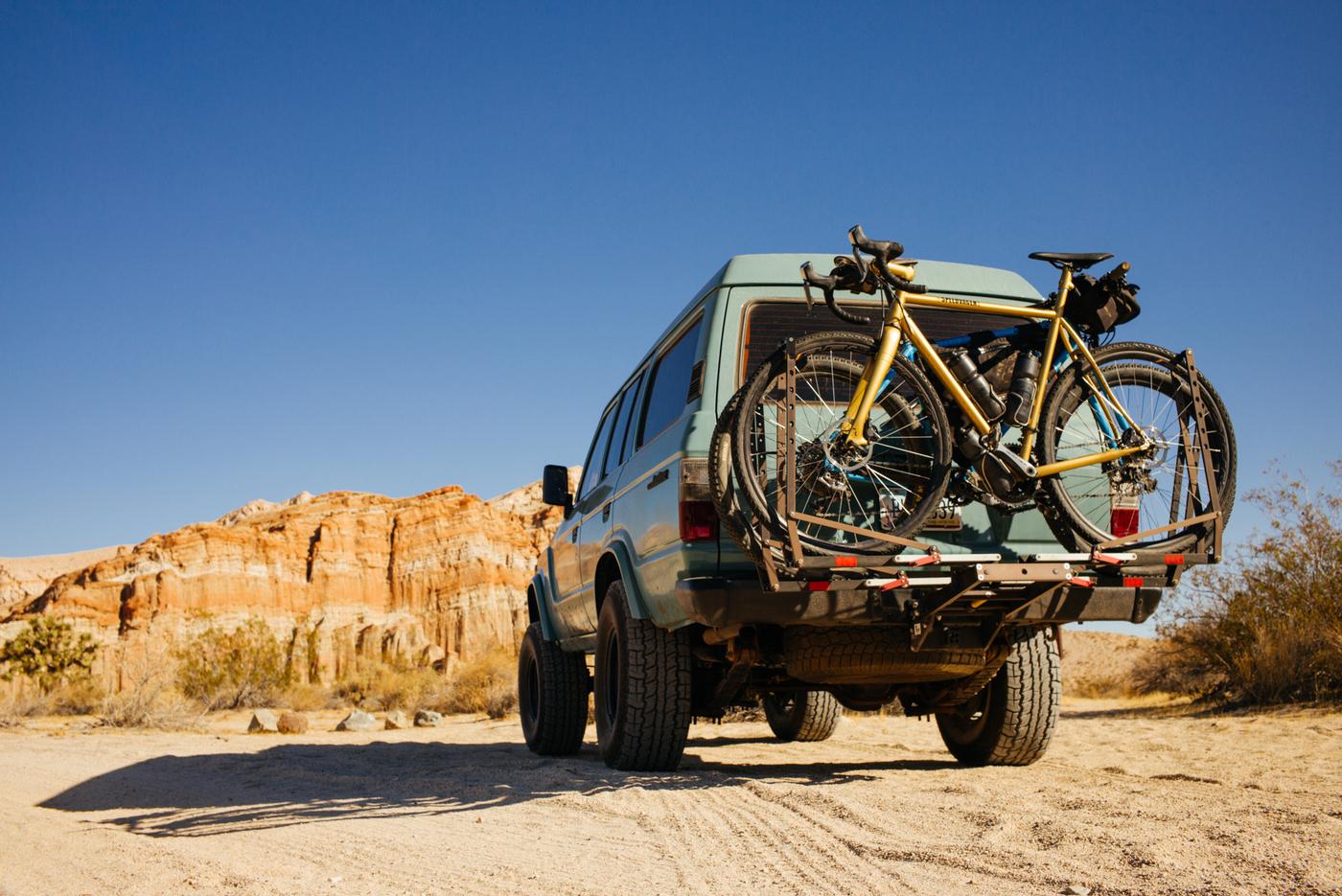 Eric and I loaded up my truck with our bikes and food for the entirety of our three-day excursion. Leaving early from LA meant we could make it to Bishop, California by lunch, just in time to feast on any number of local digs. Sorry, I won’t name drop any. Find your own special place. ;-) After leaving Bishop, we made the slow and steady climb up the 168 for camp. Along the way, we noticed a few people on road bikes, including one spry fella in a Ringtail jersey, riding an All-City Macho Man! His name is Aaron and from our brief interaction, he seemed so stoked on this ride. We gave him a churro hand-up and he peeled off up the mountain. 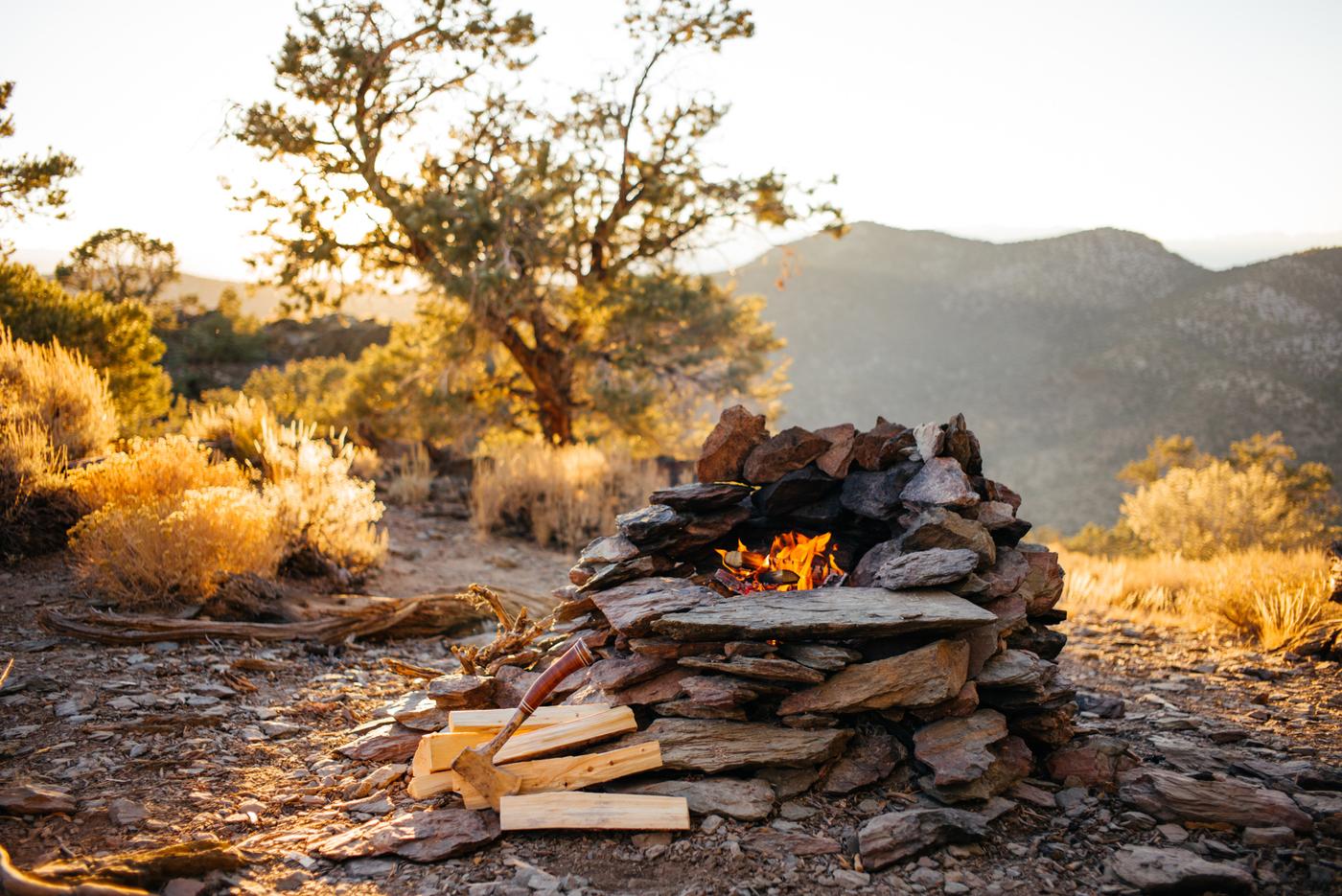 Camp that night was pleasant. Clear skies, no Crackoons or pesky critters, just our fire crackling, skillet sizzlin and a calm breeze, exposing the milkyway and stars for us to fall asleep under. It’s hard for me to sleep at elevation, so I was wishing I had brought a Tylenol PM to aid in my slumber since the morning would come fast…

5am. Alarms echoed, waking us both. We decided the night before to leave camp and drive to the Visitor’s Center where we’d cook breakfast, brew coffee and take advantage of their facilities before leaving on our ride. Remember, there’s NO WATER on the mountain… 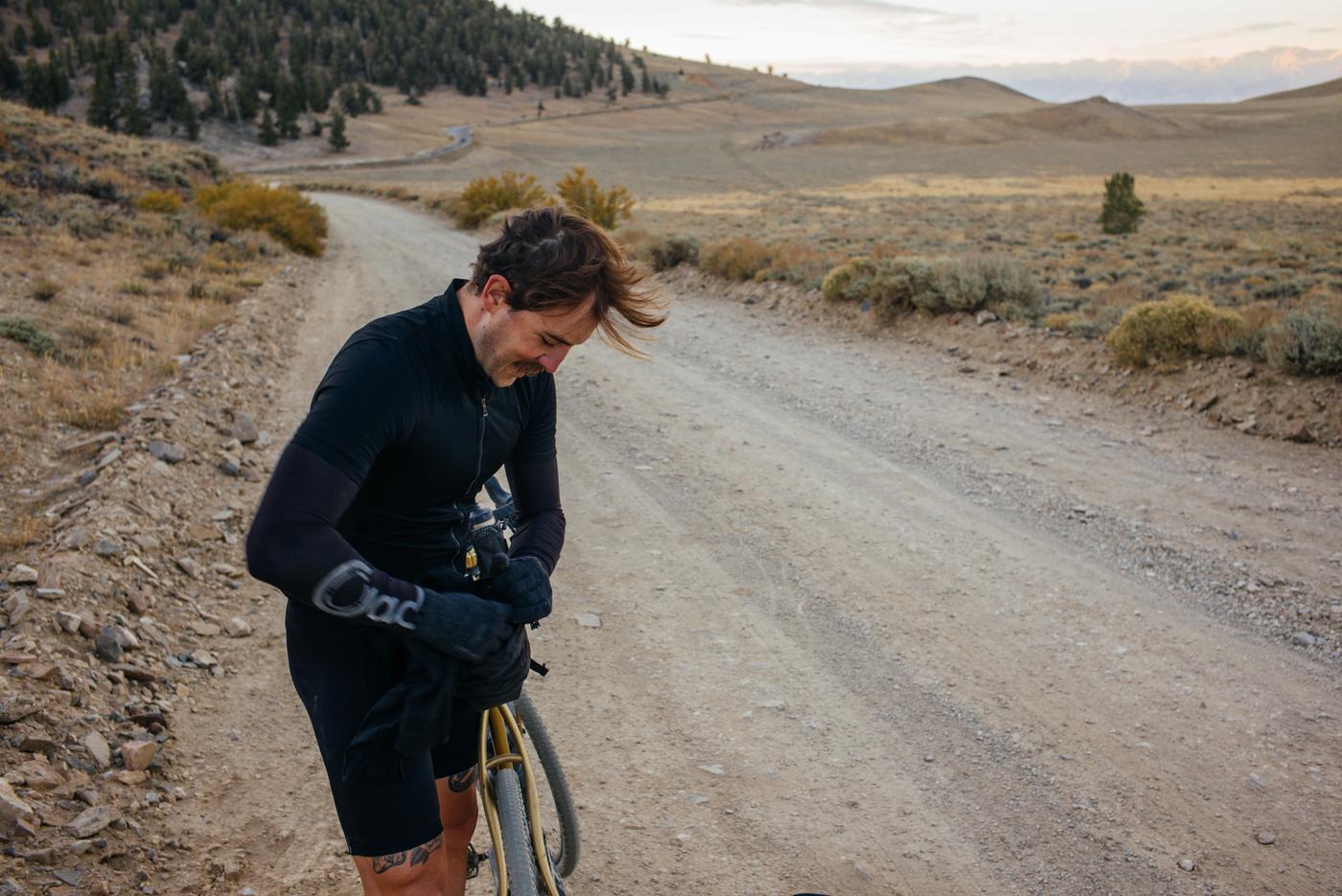 Watching the sun peel up through the clear autumn sky and dance amongst the ancient Bristlecone pines was unreal. Things like that I capture with my mind because no camera on the planet can relay the warmth and humbling feeling of witnessing something that’s been happening for thousands of years in that very place.

Once we were warmed around 7am, we began to pedal. Slowly. Man, feeling that elevation right out of the gate is not pleasant. We both popped some Advil and sipped water before ripping down a 1,000′ descent. As we’re climbing back up, I yelled to Eric “We’re lower now than when we started!” 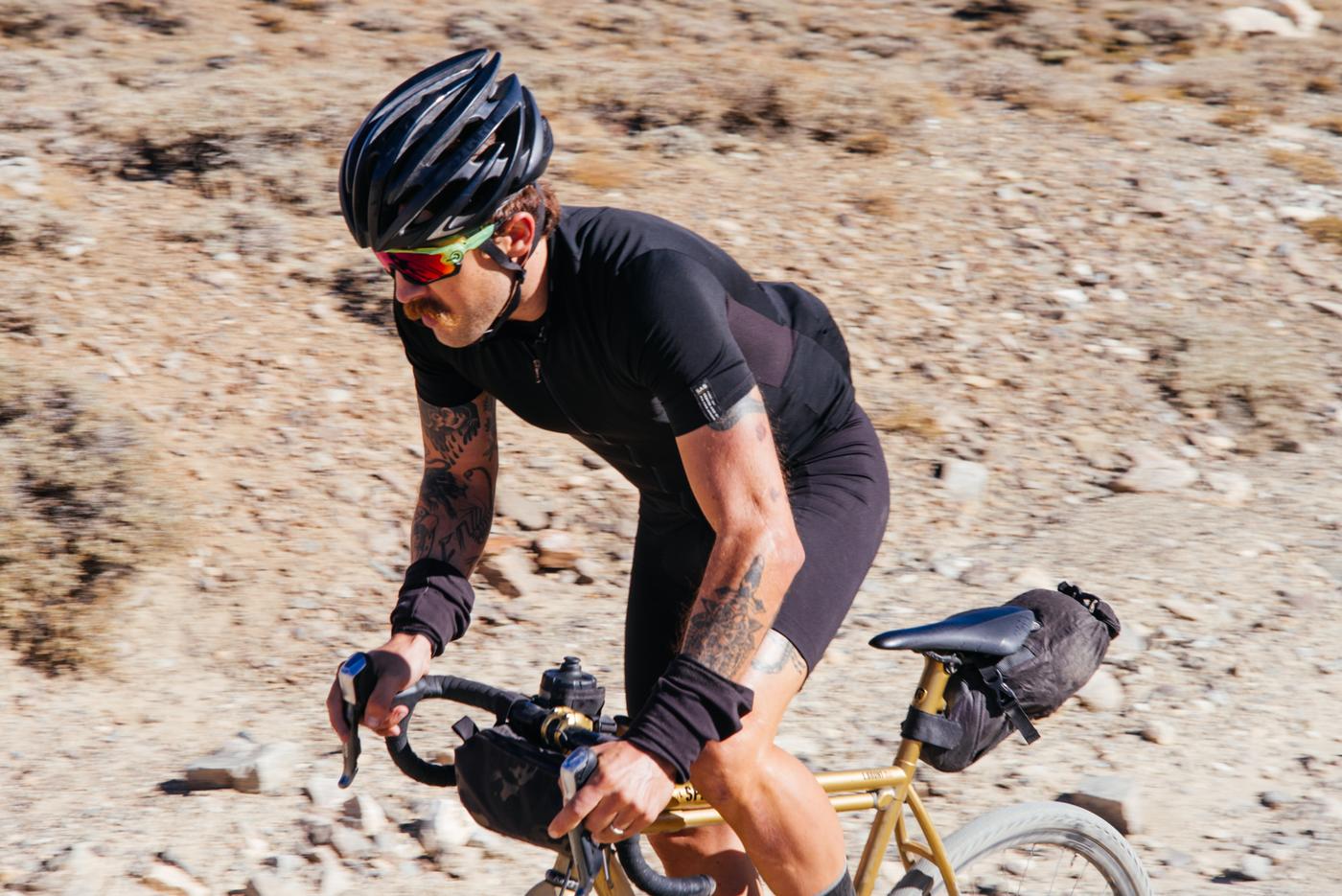 The sun was awake and the weather was changing every few minutes. Eric quickly tired of taking off his arm warmers, so he left them around his wrists, like some kickboxer from a movie in the 80’s. Coincidentally, most of our conversation hovered around movies from that era. Riding in this landscape is unlike anything I’ve witnessed before. It’s barren yet intrinsic to the detail oriented. Rocks changed hue and consistency. The plantlife was thriving and the geological formations are straight out of a sci-fi flick. Cue Total Recall or Dune.

Once we hit the gate with the pit toilet and the marmot warning (they’ll crawl into your engine compartment,) we pushed onward to the Barcroft Station for lunch. Turkey, havarti, hummus, bread and sour worms. Two apples. Down the hatch, along with more water. It’s noon. Eric thinks we’ll summit by 2pm, even though we’ve only got 7 miles to go. Those last 7 miles feel like your body is at a doom metal concert with the amps all the way up. No, scratch that. You’re strapped to the amps with no ear plugs and you’re carrying them. It’s heavy. I think we were both surprised how much we had to walk this stretch and it’s not even the hard part! White Mountain Peak sits atop a mound of scree; shaley rock that slides when your tire hits it, much less your shoes. Luckily, I had hiking boots on. Eric was in clipless mountain shoes and he was sliding everywhere. We both stopped a number of times and just laughed. There was no point in attempting to communicate with English. The summit hit us and we posed with the American flag that was in the box, sent text messages, alerting our ladies of our safety and put on our jackets for the descent. For me, it was time to let the demons flee. I ripped down the jeep trail, rocks pinging off my downtube and trying to keep the bike, along with myself, upright. We were in one piece for now and I wanted to keep it that way. Riding “down” from the peak is actually a lot of riding “up” and if it weren’t for the two fellas at Barcroft who let me fill up my water bladder, the rest of the ride “down” would have been very painful. Oh wait, that didn’t help. It still hurt like hell but at least I could stay hydrated. Oh and my Di2 battery didn’t drain randomly, leaving me stuck in my 12t cassette like Eric. 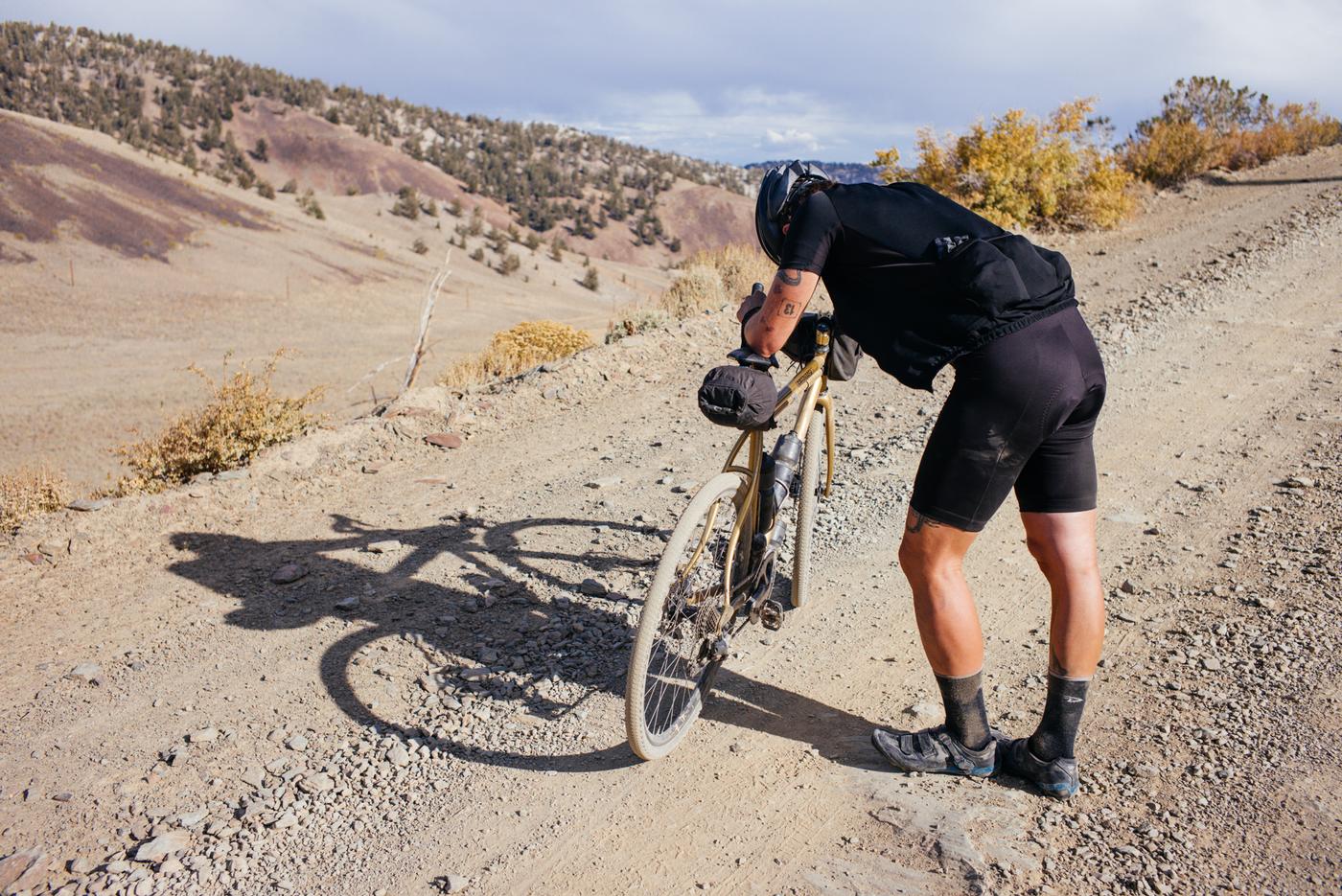 He was bummed! Truthfully though, he was walking at the same speed I was climbing with my 1x MTB. 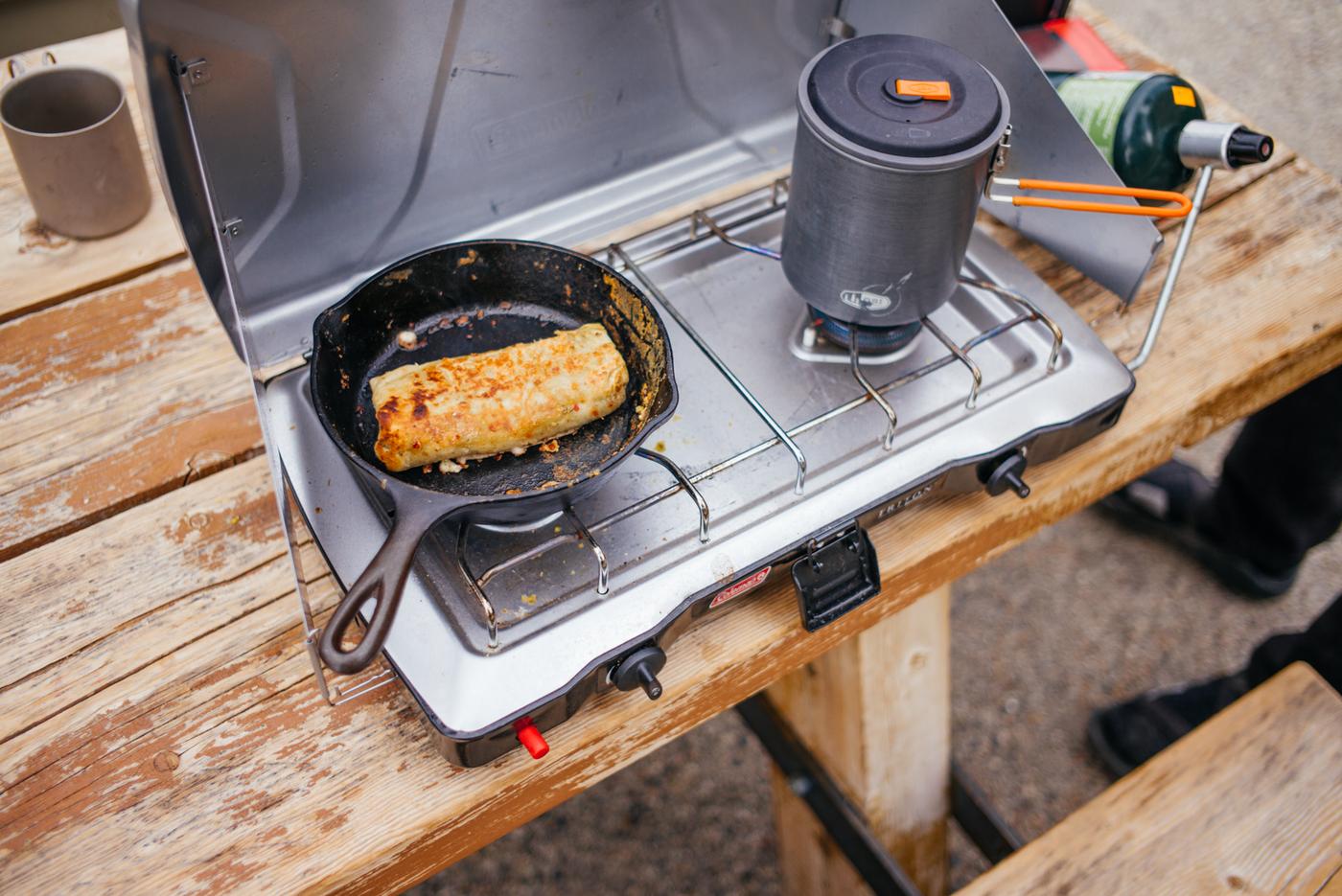 Upon returning to the truck, we pulled out the camp grill and began consuming as much protein and water as we could. The ladies that were running the visitor center gave us a smile and a wave, while a few tourists stopped to chat. Mostly about how beautiful the mountain is and about how crazy we looked ripping down the last hill on such rough roads. 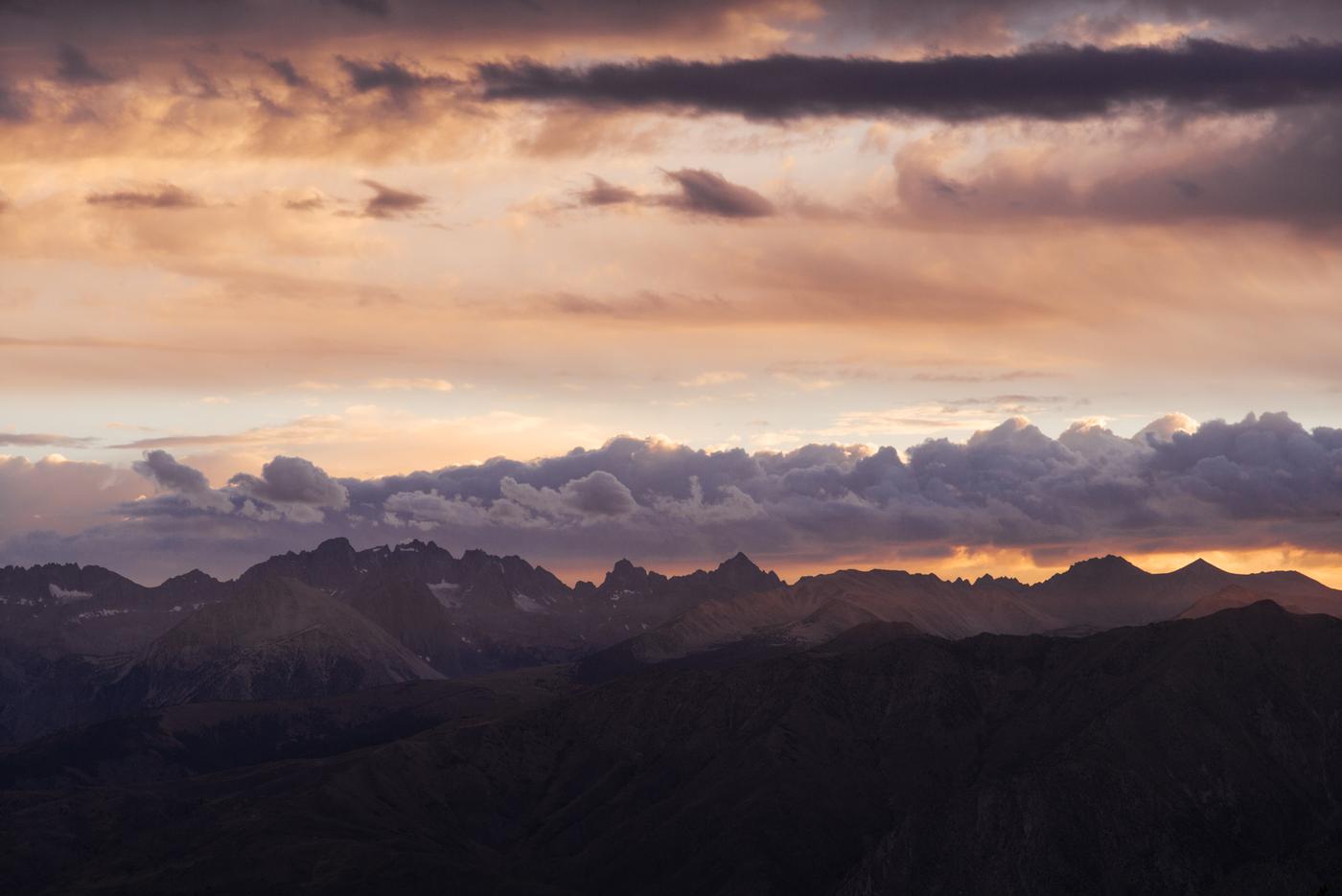 Sated, sore and ready for rest, we made our way back to camp, only to have the sky erupt in one of the most foreboding sunsets I’ve witnessed to date.

White Mountain Peak lives up to its infamy. Eric and I are both pretty seasoned cyclists. We’re strong, fit and smart, yet at any moment this place could have taken our pedigree and turned it against us. Do not underestimate this ride, be smart, do your research and if you go, give yourself plenty of time. The last thing you’d want to do is move through without fully embracing its majestic beauty.

I’ll be back… Dammit, I told myself I wouldn’t end with an 80’s action movie quote!