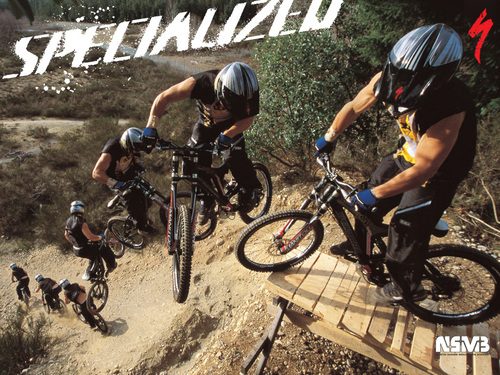 I just want everyone to take a few minutes and read what Alex wrote in the Steven Jensen: New Rims Edit. While I may not agree with 100% of the content, he makes a very valid point; cycling cross-pollinates. Crossing over between bikes, regardless of rim size makes things interesting. Tom LaMarche did it in 2007 and now others are doing it. Many thanks to Alex for taking to time to write this comment. Read his comment here:

This happened a bit in the mountain bike scene too when riders like Darren Berrecloth (who was a good, but 2nd rate BMX’er) switched over to big bikes, and did all the big lines that the old mountain bikers did, but threw bmx tricks in as well. He immediately won a bunch of contests and was picked up by Specialized soon thereafter.
People started to bitch and moan a bit, but after a few other riders switched over, it got some cred for the sport because people were doing more than just hucking themselves off big drops and jumps to flat.

Check out more below…

This fixed trick thing reminds me a bit of that. To me, the biggest issue in both situations is that if BMXers can switch over and kill it immediately, what’s the point of riding fixed or mountain bikes. Some people argue that its harder on a fixed or mountain bike. CT Justin’s comment about seat height hits on this. With mountain bikes it was almost like “well doing one tailwhip on a 26in bike is harder than doing one on a bmx, thats why our pros can only do one instead of 3.” Thats bullshit. If the argument comes down to that, someone has obviously just chosen the wrong equipment.

What helped with mountain biking is that the contest/big sponsor side of the sport kind of shelled off the street aspect (because BMX was so much more practical for that style of riding) and focused on the Slopestlye kind of contests, a place where mountain bikes were necessary.

It seems like fixed trickery is going to have to find a way to justify riding the big bikes rather than just the difficulty. I know people argue that the advantage is that you can get around more easily than on a bmx, but as the bikes devolve toward bmx bikes and get less efficient (26in wheels, silly gear ratios, big tires) thats becoming a moot point.

I definitely understand that there’s some reward in the challenge, but if thats the case people are going to have to stop bitching about a BMXer showing them up.

Much respect to all who have commented with a positive slant in these entries and many thanks to Alex for commenting. Remember, no one can tell you how to ride your bike. Only you can decide that!