We’ve seen a lot of design gimmicks to make rough roads more pleasant on ‘cross or all-road bikes, mostly in the form of suspension forks, yet I personally feel like there’s more that could be done in terms of frame design. While I’m not an engineer, I feel like achieving comfort on rough roads can mostly be done in the frame itself. That with larger volume, lower pressure tires, a carbon fiber bicycle can really show its true potential when the going gets tough.

Granted, there have actually been a good number of attempts at this over the years, but mostly from the bigger brands with extensive engineering teams, with access to custom layups and large production numbers, but it wasn’t until I saw the Calfee Manta RS at NAHBS this year, that I really thought frame design and compliance had been approached in a different, honest design language.

Straightforward
Not that anything on a bicycle can be dishonest, so perhaps “straightforward” is a better term here. Calfee is known for carbon fiber design. It’s how they made their name, that along with Greg Lemond’s winning 1991 road bike is when they made their name. Ever since, you could say, Calfee has been experimenting with frame design. I’ve always loved the way these bikes ride, even the older ones and even appreciated the Giger-esque aesthetics. The all black frames looked like some alien chrysalis, waiting to evolve.

The basis of Calfee’s designs are very true to form. Much like lugged steel construction, you’ve got tubes and lugs which the tubes are joined to, forming the triangles of a bicycle frame. Things like brakes, wheel clearances, and other programmatic elements are designed around various tolerances, allowing the bike’s intent to unfold in the design process.

When a Calfee is presented in raw carbon fiber, like this bike, you’re allowed a straightforward look into not only how the bike is made, but what it was made for. I feel the same overwhelming sensation to vomit when I hear the word compliance in a bicycle review, especially a carbon fiber bicycle review but Calfee’s frames have been utilizing this design feature long before it was a tag word in website’s bike reviews. Rough road riding can take a toll on your body. People complain about their wrists and asses being sore from long days in the saddle on gravel or dirt roads all the time. While the cynical and sarcastic internet commenter might type our “get a mtb” hastily, there’s something to be said about listening to these complaints and offering a solution.

Calfee attempted to do just that, trying their best to figure out how to address this problem, without adding a short-travel front fork to one of their bikes, or pushing their tire clearances out for monster-cross tires. Instead, Calfee looked at the rear triangle for answers. 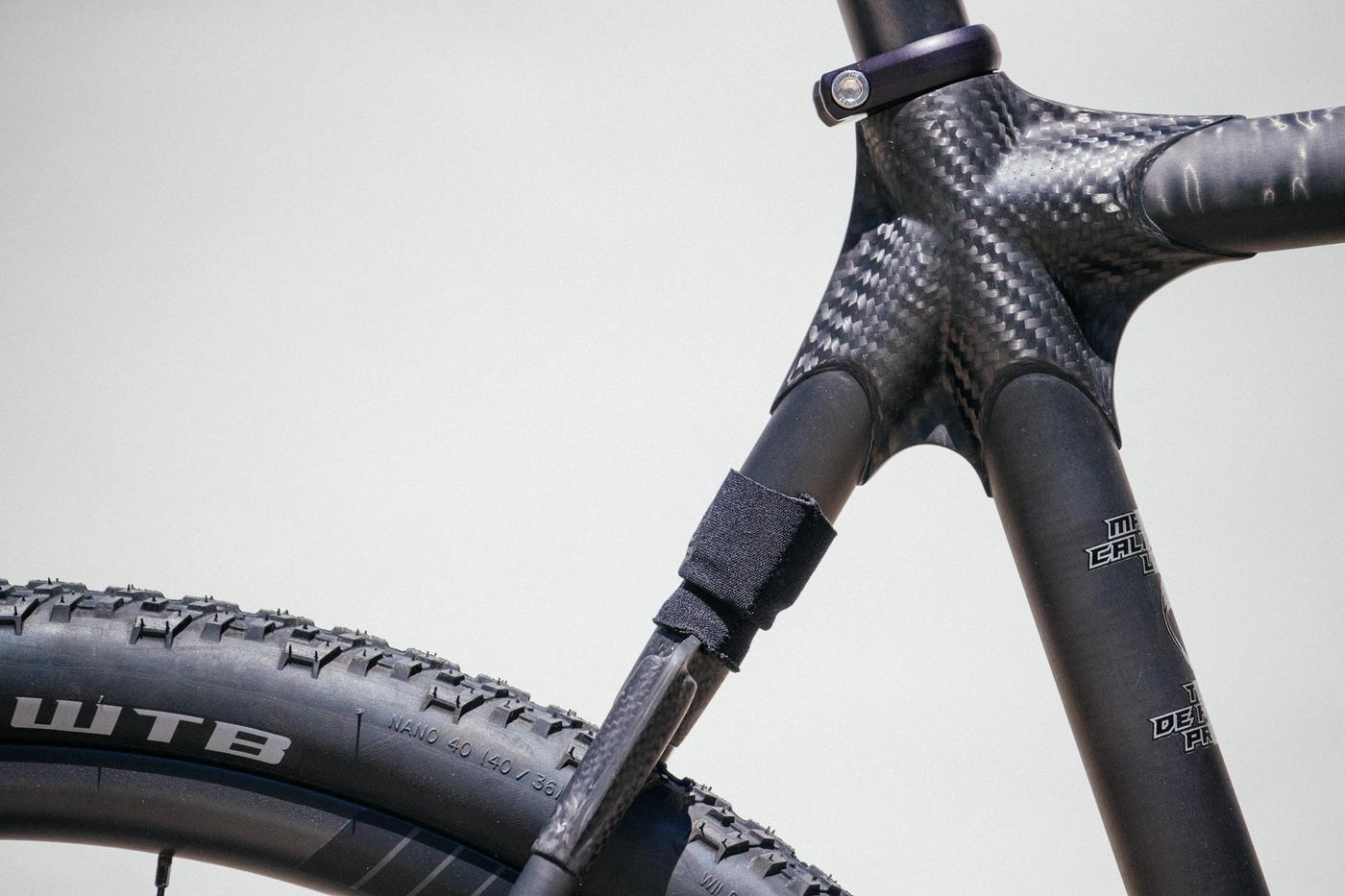 The Manta RS is available with an optional 12mm rear suspension via a coil spring with four stiffness options. This coil is allowed to move freely inside a sleeve within the layup and the whole mechanism is protected by a neoprene boot. Through this design, Calfee was then able to flatten out a substantial part of the chainstay to allow a good amount of road-dampening to occur while riding. The beauty of this design is you don’t really notice it on asphalt, it’s not until you go off road that you feel anything. It may not seem like much, but 12mm of flex on the rear triangle, when paired with the leaf-spring design on the chainstay, makes a difference. 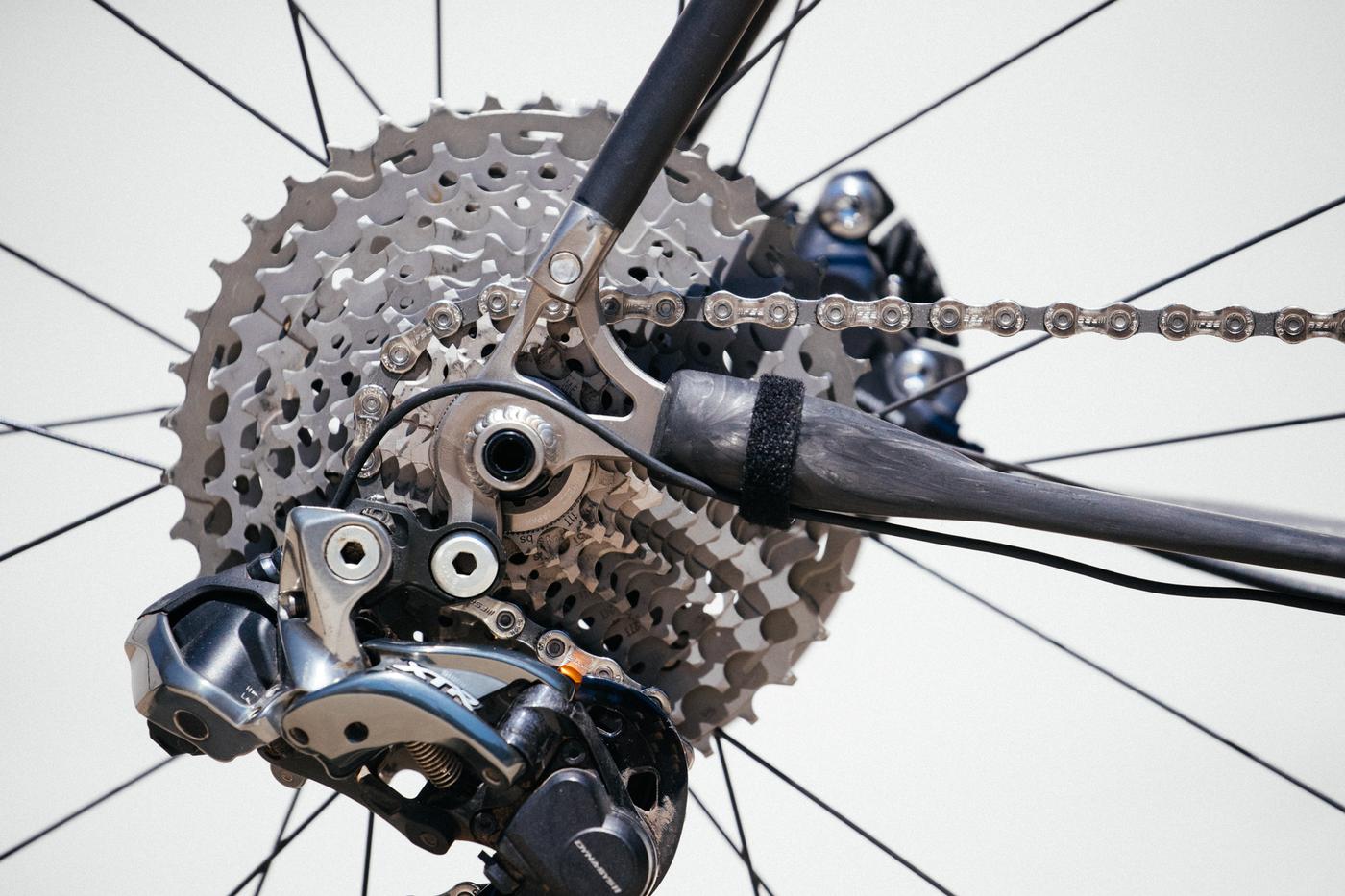 Unfortunately, I wasn’t able to put in any long days on the saddle with the Calfee Manta, but that’s only because this time of year, I can’t put long days on the saddle with any bike due to my schedule, but I always believe that riding your favorite, familiar routes on a review bike is the best way to vet its ride characteristics. For me, it only took a few rides to really understand what Calfee wanted to achieve and how they executed it. In some cases, it takes riding a bike for weeks on end to gain enough of an understanding, but in this case, enough was enough. Look, Calfee’s designs can be polarizing. I’ve never had so many complete strangers interject their opinions while riding a bike before. (Well, perhaps the Cannondale Slate offered the same sort of commentary on the road.) Riders would come up and either instantly be dumb-founded with awe, or disgusted, in jest of course. Some people don’t like the webbed lugs, others think the oversized tubing looks odd. For me, I don’t really have a lot to critique on this bike, mostly because I love the experience of looking as a bike’s stance and then feeling a bike’s stance. Some bikes just look uncomfortable, but ride like a dream and vice-versa. The Calfee Manta’s design honesty translates immediately to its ride. Even with the 12mm of coil-dampening on the rear and leaf-spring chainstay design, I could really feel what this bike was designed to do. Is it something I need on my bikes? No, but that doesn’t mean others wouldn’t appreciate it. My only major critique comes in a form of the inevitable rubber side up that’s going to happen on off-road bikes. There’s something scary about riding a frame this expensive. Luckily, Calfee does offer crash repair if that happens. A minor part spec critique is the fork. There’s not much room for mud or debris around the tire, but I never had problems with it in Southern California. For that matter, the rear wishbone coil interface doesn’t have that much clearance either, which should be an easy design fix.

Also, one note, please omit the word “cross” from this bike, that was a production error that happened at the eleventh hour before this bike was headed off to NAHBS. This bike uses the Manta road, not the cyclocross geometry. 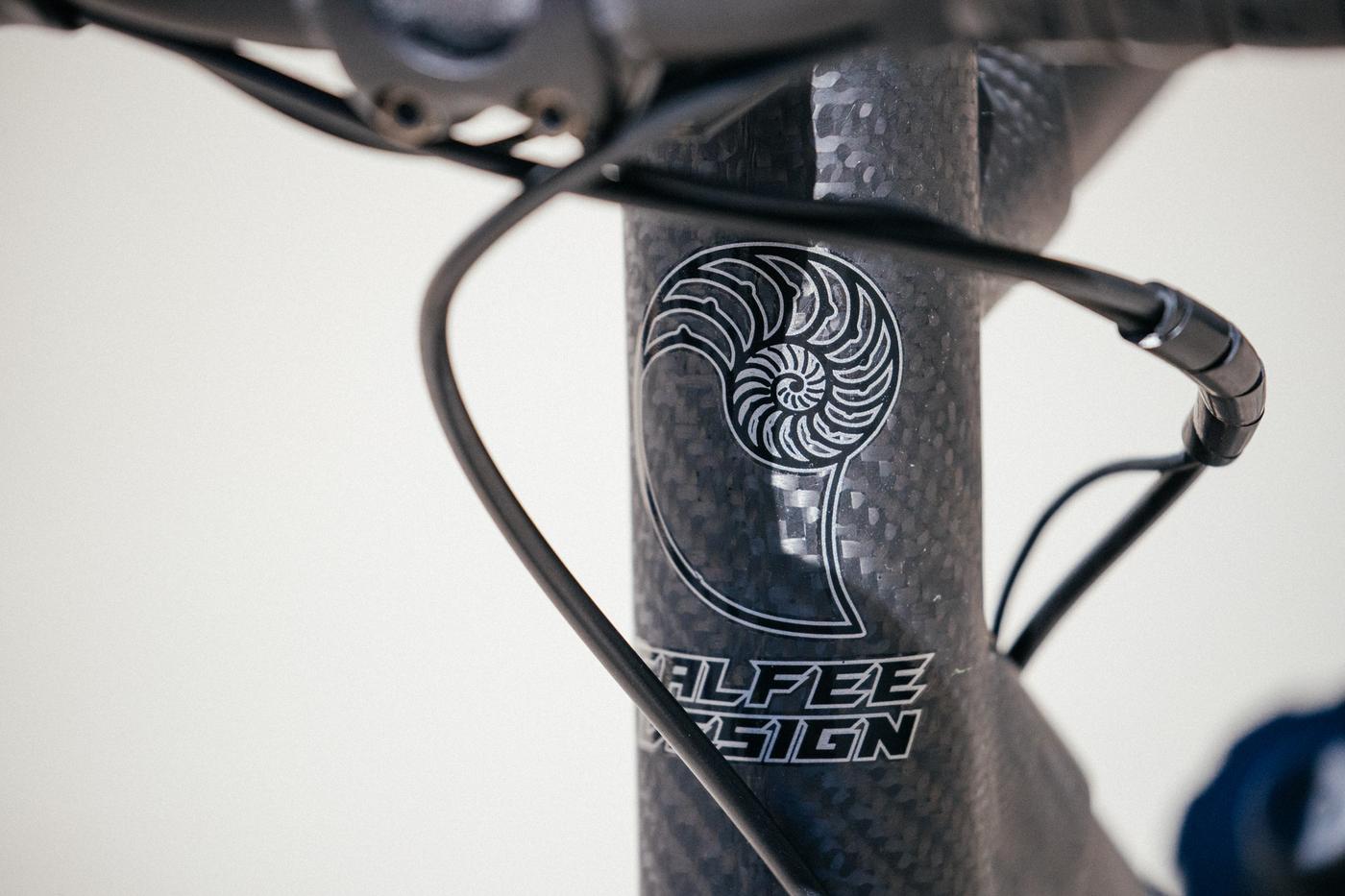 Calfee’s pricing is in plain English on their website, along with any line-item add-on you might want. Their work isn’t cheap, but they do design and make some truly unique bicycles over there in Santa Cruz. If you’re interested in checking one out, holler at Calfee, you might be surprised…