If you watched the first stage of the 2014 Amgen Tour of California, then hopefully you watched the women’s circuit race. Zipping through the corners, tight in the front group there were a grouping of red and white jerseys: the girls of Stan’s NoTubes p/b enduranceWERX.

One of these ladies, I’ve known for years and watched her grow in the sport. BrittLee Bowman races road for Stan’s and crushes cross for Richard Sachs. She’s a total babe and is one of the most humble, friendly people you’ll meet on a bike.

Right after the women finished their race, I shot some quick photos of BrittLee and her Rosko steel road bike… I love the “muscle” photo! 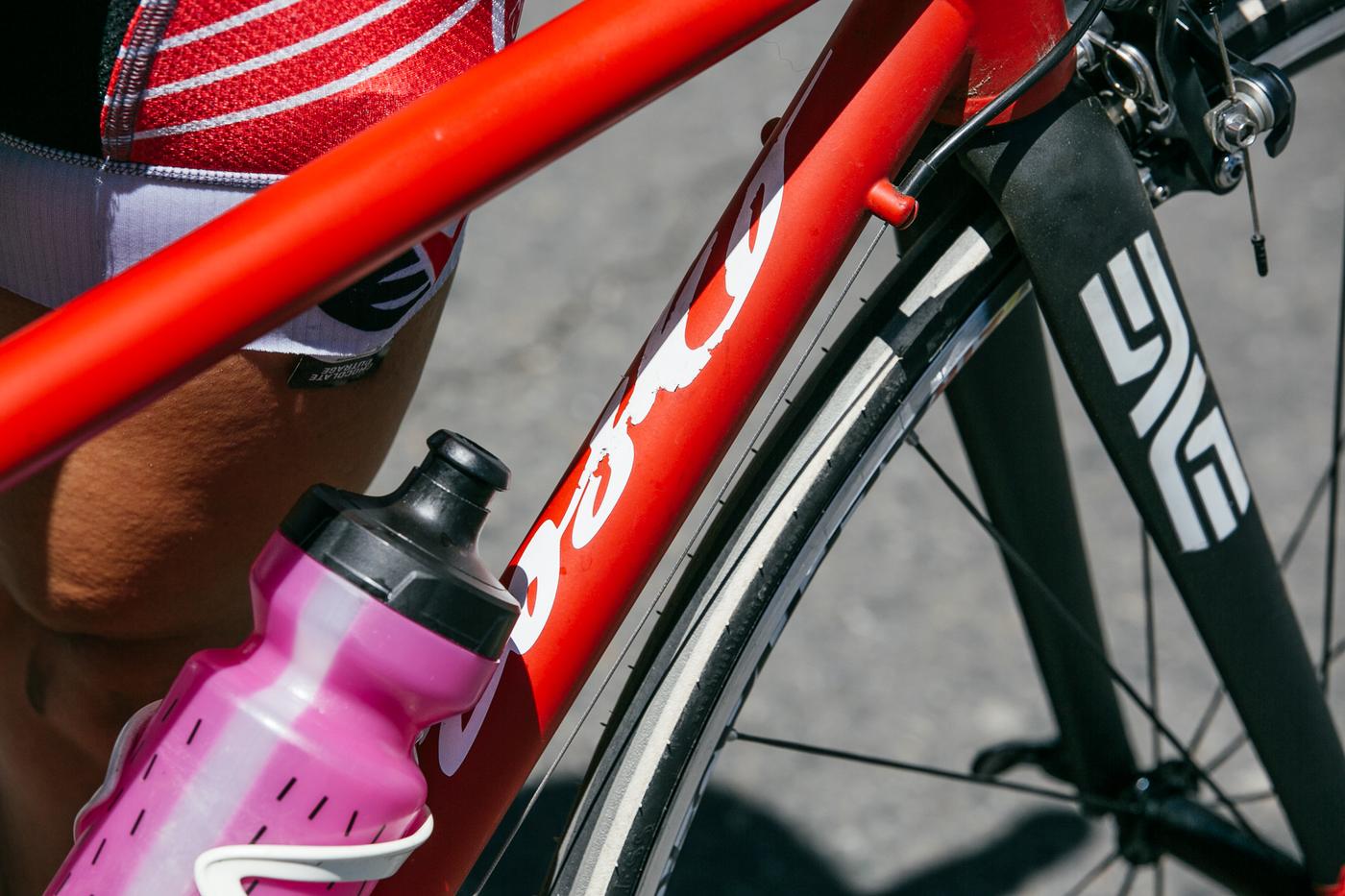 So, a steel road bike? I think you were the only one in the field on steel… Do people ask about your bike ever?

BrittLee: I don’t know if I’m was the only person on steel. I haven’t ever looked… I just ride it and I don’t really pay attention to the other bikes, so I don’t know. Over this weekend a bunch of people have asked me about it. I love the bike.

I started with a carbon road bike. It was just mushy. I didn’t feel great about it and Seth wanted to build me a bike. We talked and he built me exactly what he thought I needed and what I thought I wanted. I ride it and I enjoy it… I don’t know how to describe it exactly. I dunno, I just enjoy the bike!

When people ask about it, I tell them that it’s Seth Rosko and he’s a builder in Brooklyn, he’s a one-man show and builds really great bikes.

What was it like shooting that Manual for Speed piece?

BrittLee: It was funny, I mean, I didn’t really know exactly what the entire vision was and we just had to go and trust them to make something amazing. I think that Becca and Emiliano spoke about it and I was minimally filled in on the whole thing. I just trusted their vision to represent the team through doing a wacky shoot. Some people don’t know their work and they’re shocked or turned off and then they understand it after a few seconds and see how actually informative it is.

I wanted to ask you about equality professional cycling for women, but that’s such a weighted question, so instead, any words of encouragement for women who want to get into the sport?

I think that sometimes it’s confusing where to start and there are lots of things to learn on your own. The best way to get into it is to talk to other women on teams and figure out how to get on one yourself.

Mostly so that you’re part of a group of female cyclists. It’s what really makes a huge difference. They can teach you everything, from what the different bike races are, where to sign up, etc.

Figuring it all out in general tends to be one of the biggest problems… Everyone can do this.

I didn’t think I was an athlete. I just found bikes, started working out and did then started racing alleycats. From there, I started racing and fell in love. It’s all about repetition and dedication.

Where’s your favorite place to ride?

BrittLee: A few years ago, I toured from Vancouver to San Francisco. It was amazing, just being on the coast. It’s mind-blowing with all the nature. The trees on the west coast… are… so… big. The first time I rode down the coast, I had never seen a tree that big as those redwoods.

BrittLee: A huge shout out to Shane Ferro for believing in the idea and pushing us to make this happen.

Hatchmap is amazing because it’s a small company in Brooklyn that does app and website development. They’re passionate about cycling and equality with women in cycling. They’ve been supporting the women’s Cat3/4 CRCA series and sponsored the first RHC women’s criterium. They also sponsored our women to go to the TOC, in conjunction with New York State Bike Racing Association.

It’s amazing – a huge thank you to them to make this happen.