Sit back and enjoy the lightshow!

Arizona is one of the most remarkable states in the lower 48. From saguaro-covered mountains to forests of ponderosa pine, the ecotonal shift across the state’s expansive footprint is only bested by the geologically awesome Grand Canyon. That’s part of the appeal of the mighty Arizona Trail, right? To see the state in its entirety from top to bottom. While the AZT might not be for everyone, there’s another trail system on the rim of the Grand Canyon that is perfect for those looking for a truly unique and characteristically Arizona experience via a quick overnighter or even a day ride.

Once we had samples of our Radavist Edition Mosaic GT-2X bikes, I wanted to put them to the test and do a proper shake-down overnighter somewhere memorable and beautiful. Pulling together this project was quite the undertaking with supply chain issues still running rampant. Our trip kept getting pushed back into the summer months. It was edging on being too hot to tour our original route, so we looked to the North Rim of the Grand Canyon and found a true gem of a ride, perfect for a weekend of sleeping out under the monsoon skies… 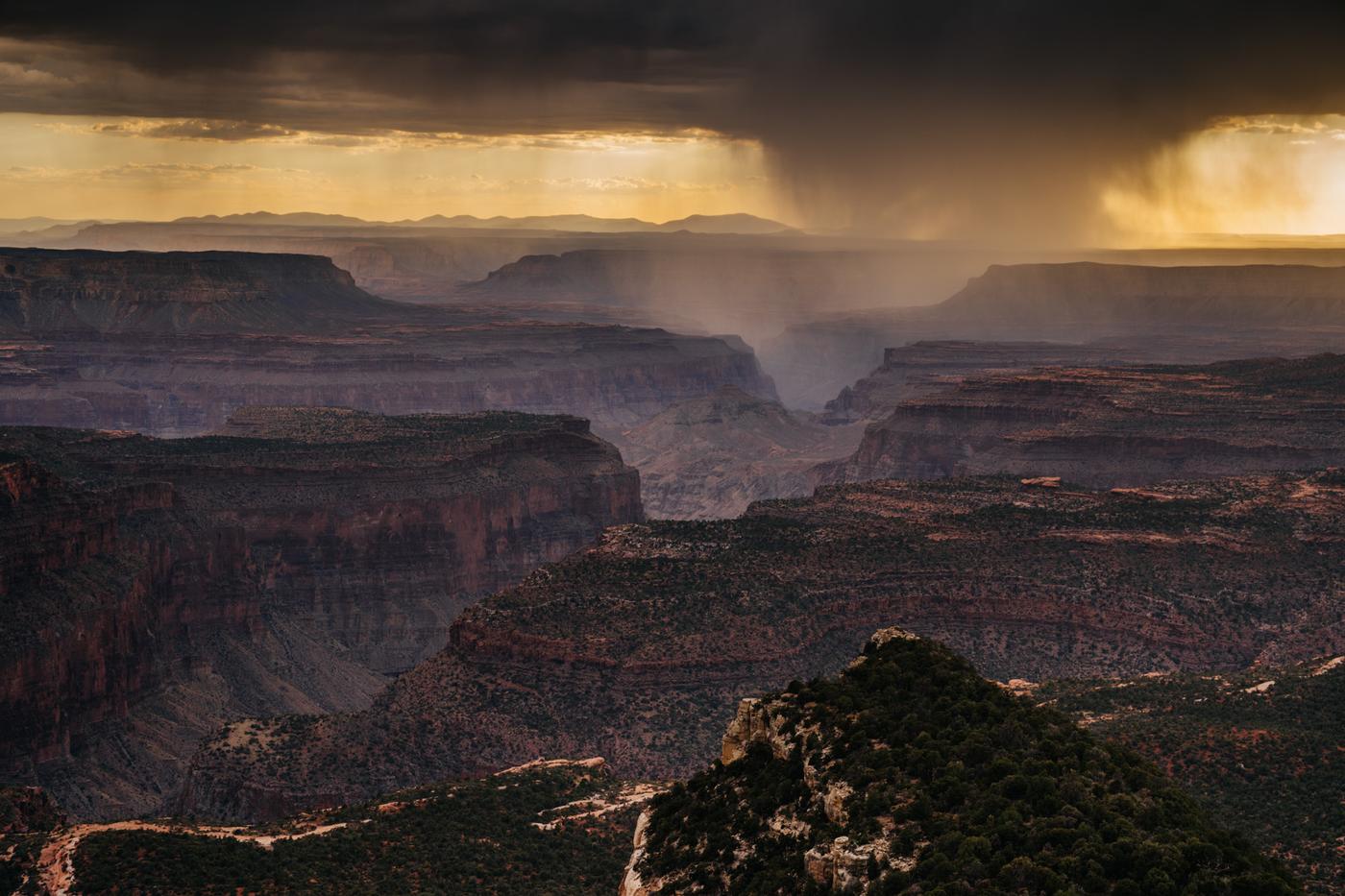 “Have you ever wondered how the Grand Canyon was formed and why it is found here in Northern Arizona? To understand the formation of the canyon, there is a simple way to remember how it was shaped over time. All you have to remember are the letters D U D E or dude. The letters stand for: Deposition, Uplift, Down cutting and Erosion.” – National Parks Service

I love how our National Parks Service is so colorful with its description. DUDE! Discussing a complicated subject like how the Grand Canyon was formed ain’t easy, but I always loved that acronym. Deposition refers to the two-billion-year-long process of sedimentary rocks being stacked atop a foundation of igneous and metamorphic rocks. These layers created the base for the eventual Colorado Plateau uplift events — when the crust tilts for various reasons — then downcutting, and finally, erosion by the mighty Colorado River.

The Colorado River has been carving away the Grand Canyon deposition for the past five to six million years, in a process known as downcutting. Over time, the river slowly cut and continues to cut through the stacked sedimentary layers. While geologic time includes the present, the current canyon is much younger than the rocks through which it has slowly eroded over millions of years. Even the youngest rock layer, the Kaibab Formation, is 270 million years old, still much older than the canyon itself.

Humans have long associated themselves with this stunning formation, including a total of 11 indigenous tribes, which are still very present today and continue to live in and visit the Grand Canyon for ceremonial reasons. Topping out at 8,000′, the North Rim of the Grand Canyon in Arizona is not like the state’s southern Sonoran Desert. It is wooded with massive ponderosa pines, aspen stands, and duffy soil. You won’t find many cacti here, but the views are expansive: Powell Plateau, Steamboat Mountain, Tapeats Amphitheater, and Great Thumb Mesas, as well as the Mt. Trumbull region of the Arizona Strip. 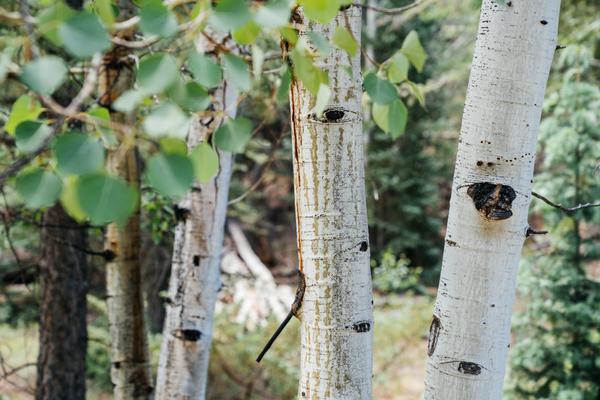 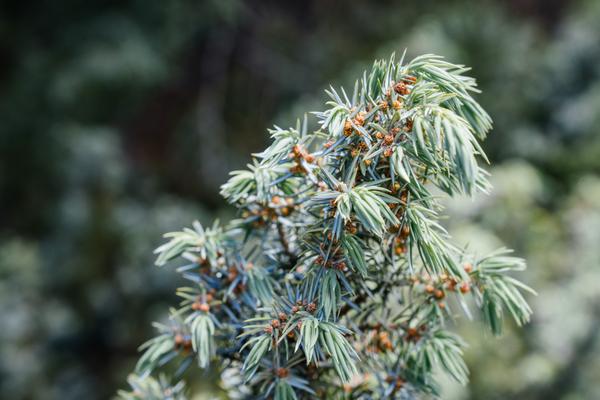 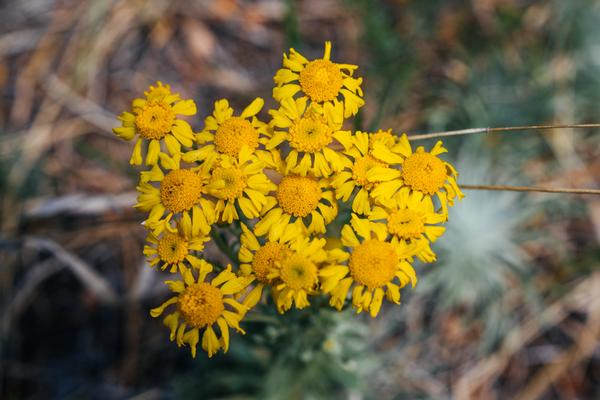 A whole 1,000′ higher in elevation than the South Rim, the North Rim is quite pleasant even in the hottest summer months. Luckily, June through August bring about Southwestern Monsoons, which provide a stunning visual show as well as much-needed moisture to the parched earth. 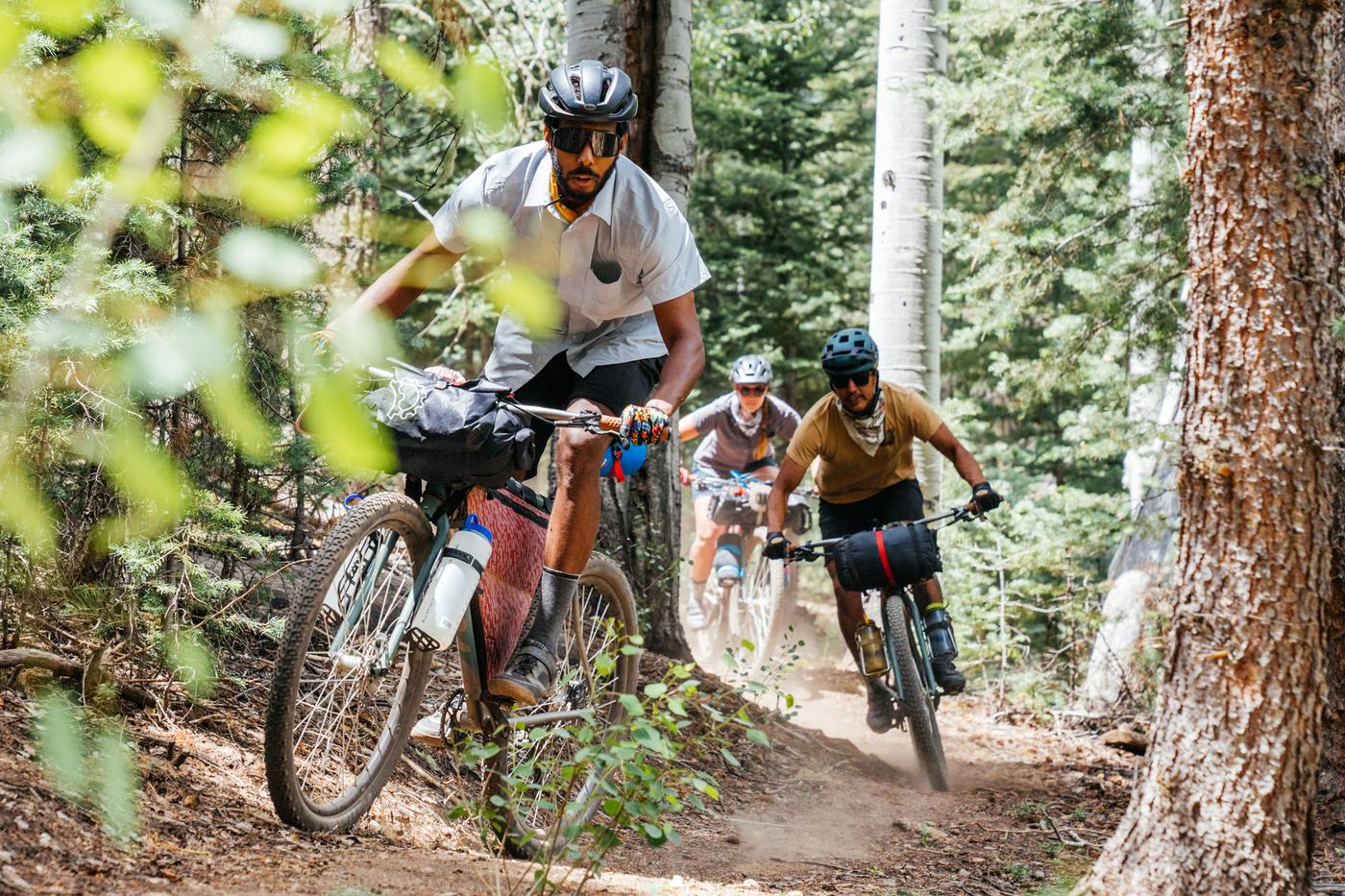 It’s in this area that the Rainbow Rim trail snakes its way from the edge of the canyon along five points — Parissawampitts, Fence, Locust, North Timp, and Timp — that jut out over the canyon, back into the forest, in an undulating ribbon of decomposed Coconino Sandstone and limestone. The singletrack portion of the ride is around 26 miles, with an additional with an additional ten miles of graded dirt roads completing the loop. While nothing is technical about the trail, it is challenging as many riders aren’t accustomed to riding at 8,000′.

Overall, Rainbow Rim is considered an easy to intermediate trail.

Looking at the route (below), it’s easy to see why this myriad of gravel roads, doubletrack, and singletrack could make for a great weekend on bikes with your friends. Our plan was to park along the forest roads to the east, ride the loop counterclockwise, camp out on one of the points, and ride back to the cars the next day. The Rainbow Rim singletrack begins at Parissawampitts point, at the northwestern corner of the route map and the entire course is completely dirt, with no pavement at all. Win! 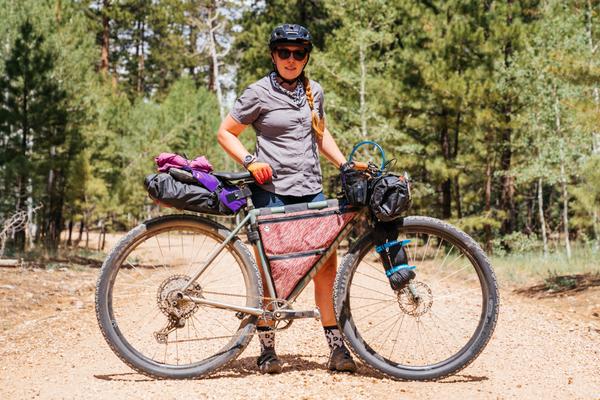 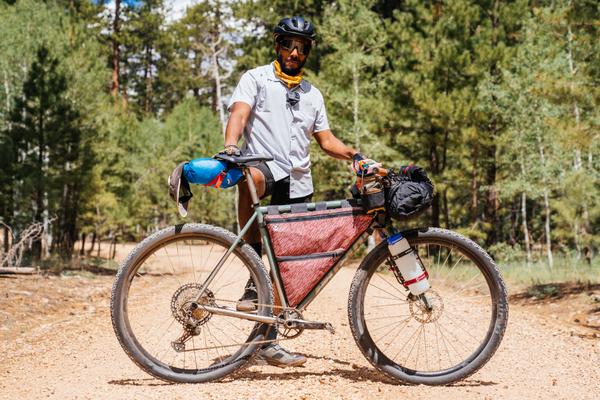 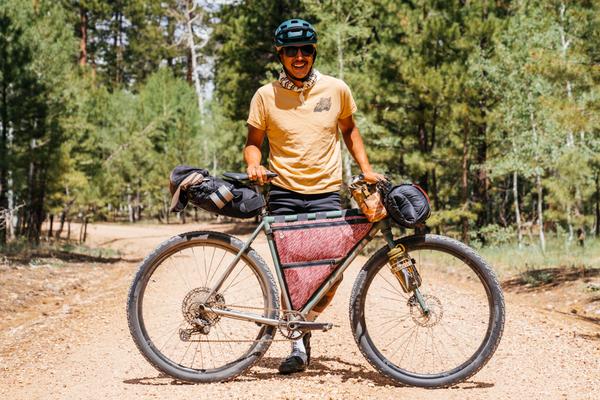 Josh drove up with Melissa and Bryan from Phoenix, with Shaun following them in from Fort Defiance. We spent the morning setting up the bikes and pedaled off up the Forest Service road feeling the bikes for the first time under load. The beauty of a titanium frame with a steel fork is it just absorbs all of the washboard corrugations and rain ruts that plague backcountry dirt roads, smoothing out the ride. Everyone fell into the feeling of these first few pedal strokes and we began our trip. 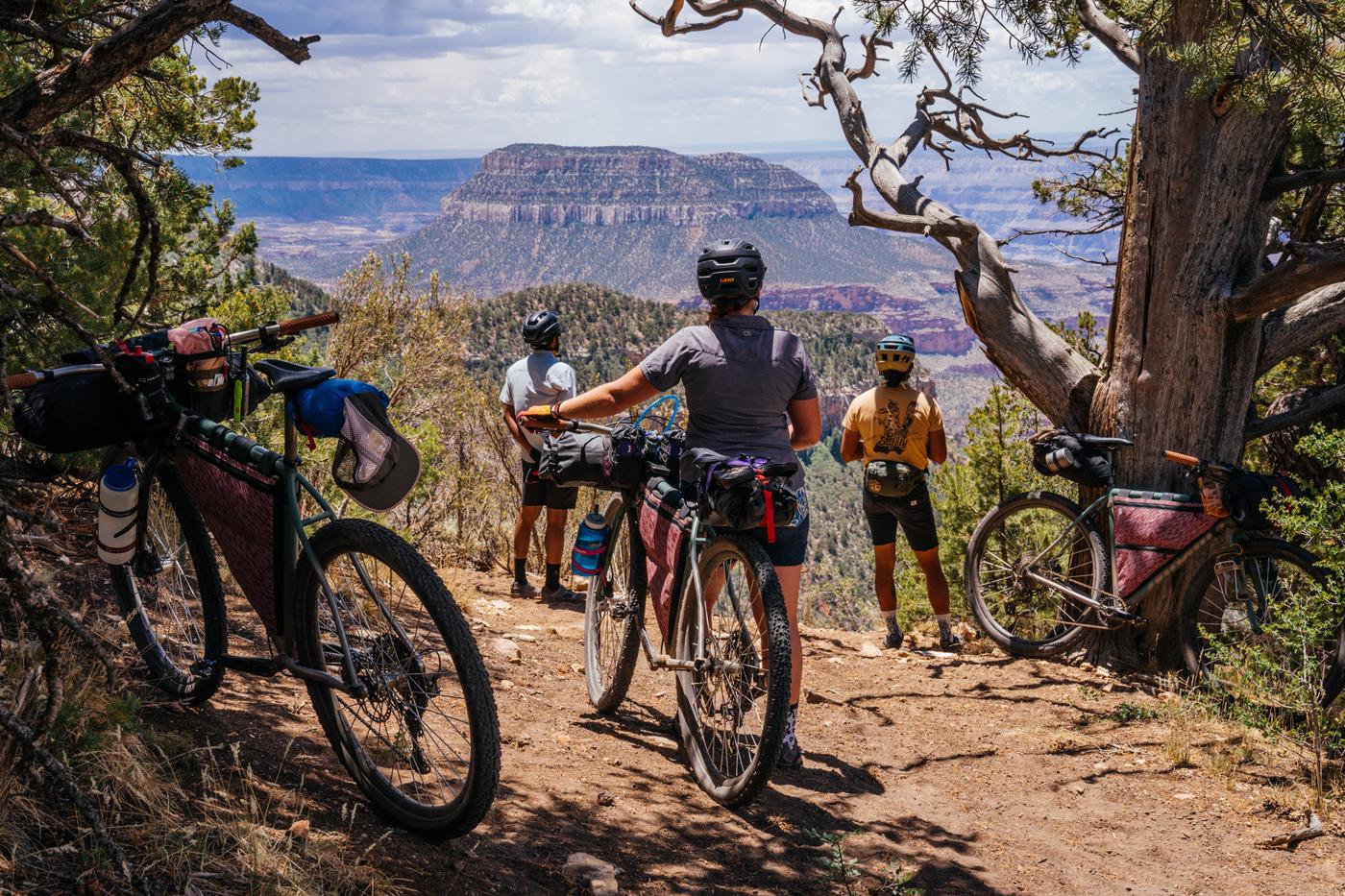 The first time you see the Grand Canyon from the route, you can’t help but stop and take in the scale. So much of the route is all about those brief vignettes out across the endless expanse as you trace the rim of the canyon on a wonderful dirt ribbon.

Our day was spent taking in the sights, the smells, spotting migratory birds, plenty of trail-side snacks, and, due to the dry climate, lots of water breaks. Because there is no water on the route, we each packed about six liters. You could also cache water at your campsite with cars if you wanted to pack a bit lighter too. 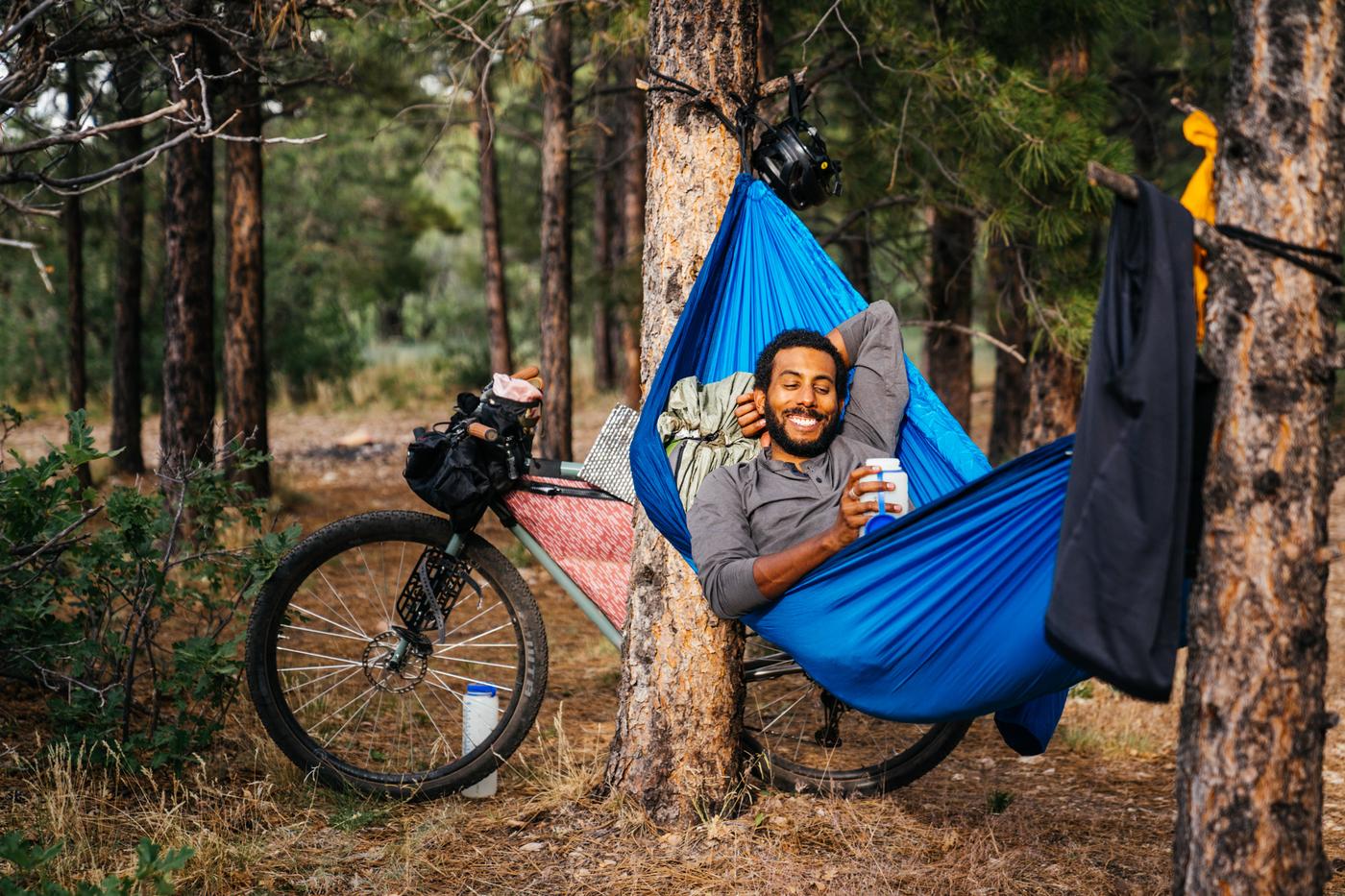 Each of the points on the route have plenty of places to string up a hammock, pitch a tent, or lay out under the stars, all within spittin’ distance of some of the most epic scenery in the Southwest. We lucked out and had beautiful monsoon skies all day, lighting up the endless vistas of geomorphological formations, with the sunset throwing gas on that fire. 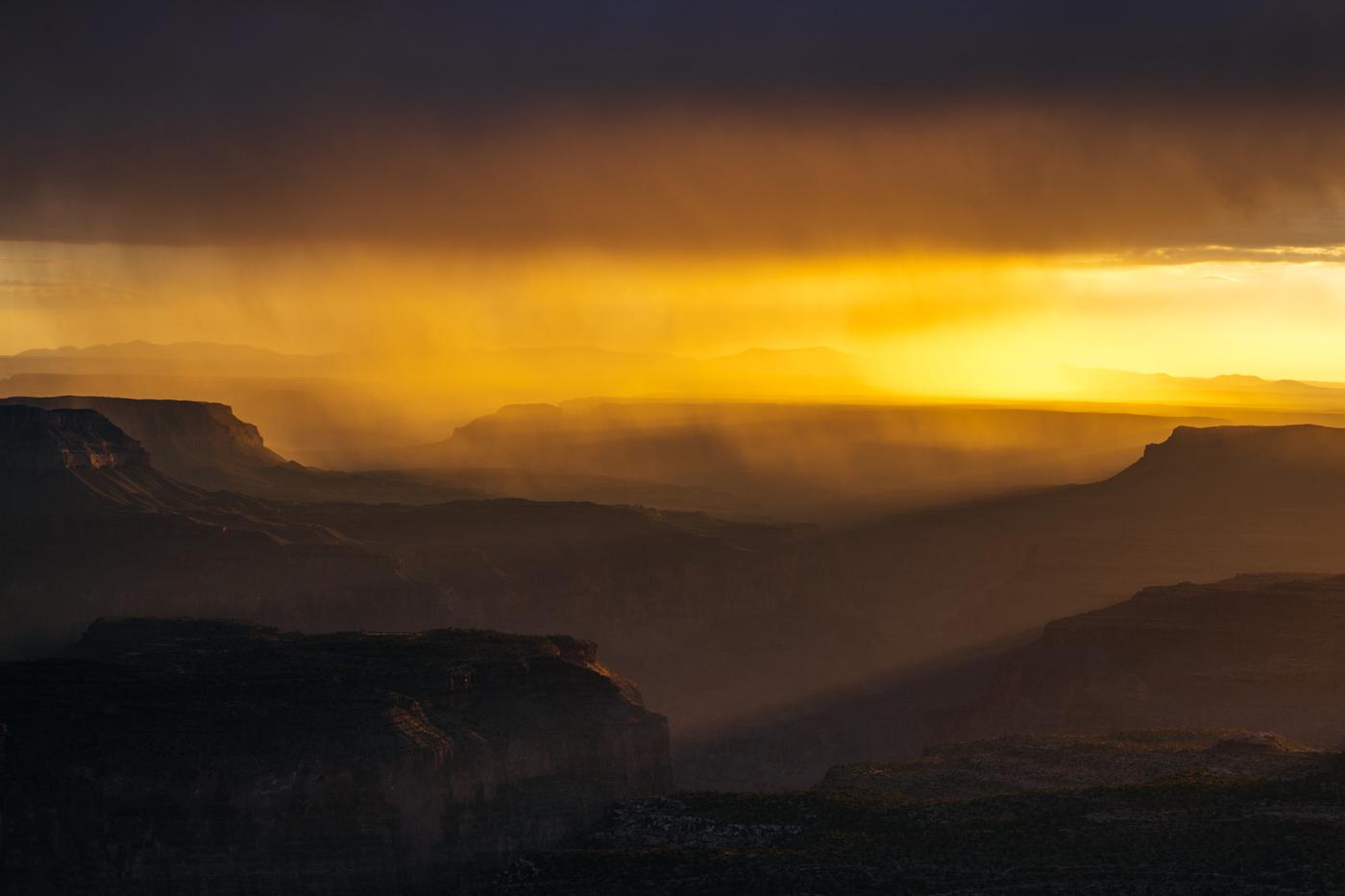 Waking up to a pleasantly cool wind, the melodic song of a Western tanager, and the bellowing calls from a hungry raven, our crew slowly turned on their camp stoves to make breakfast and coffee. I love the first morning on a bike tour. It’s like the dust, the sweat, and the stinky sleeping bag smell create a patina on each rider. These mornings are usually when people open up more and friendships are solidified. After some coffee, Melissa casually mentioned that she’d only bikepacked twice before and had never ridden a loaded bike on singletrack. Collectively, our minds were blown as she rode everything with such grace. I think it’s safe to say the bike suited her well. Shaun had a knack for making everything look good on this trip!

Loading up and taking off that morning was truly special. As we climbed away from the Rainbow Rim trail and back up toward our ride’s terminus, we began to fall into a rhythmic spinning. The climb back up to the cars is an undulating rollercoaster, which makes the 1,000′ elevation gain go by quickly and relatively painless.

As quickly as it had begun, the trip was done. We unloaded our bikes, packed in our cars, and headed out for one last night camping on the point. 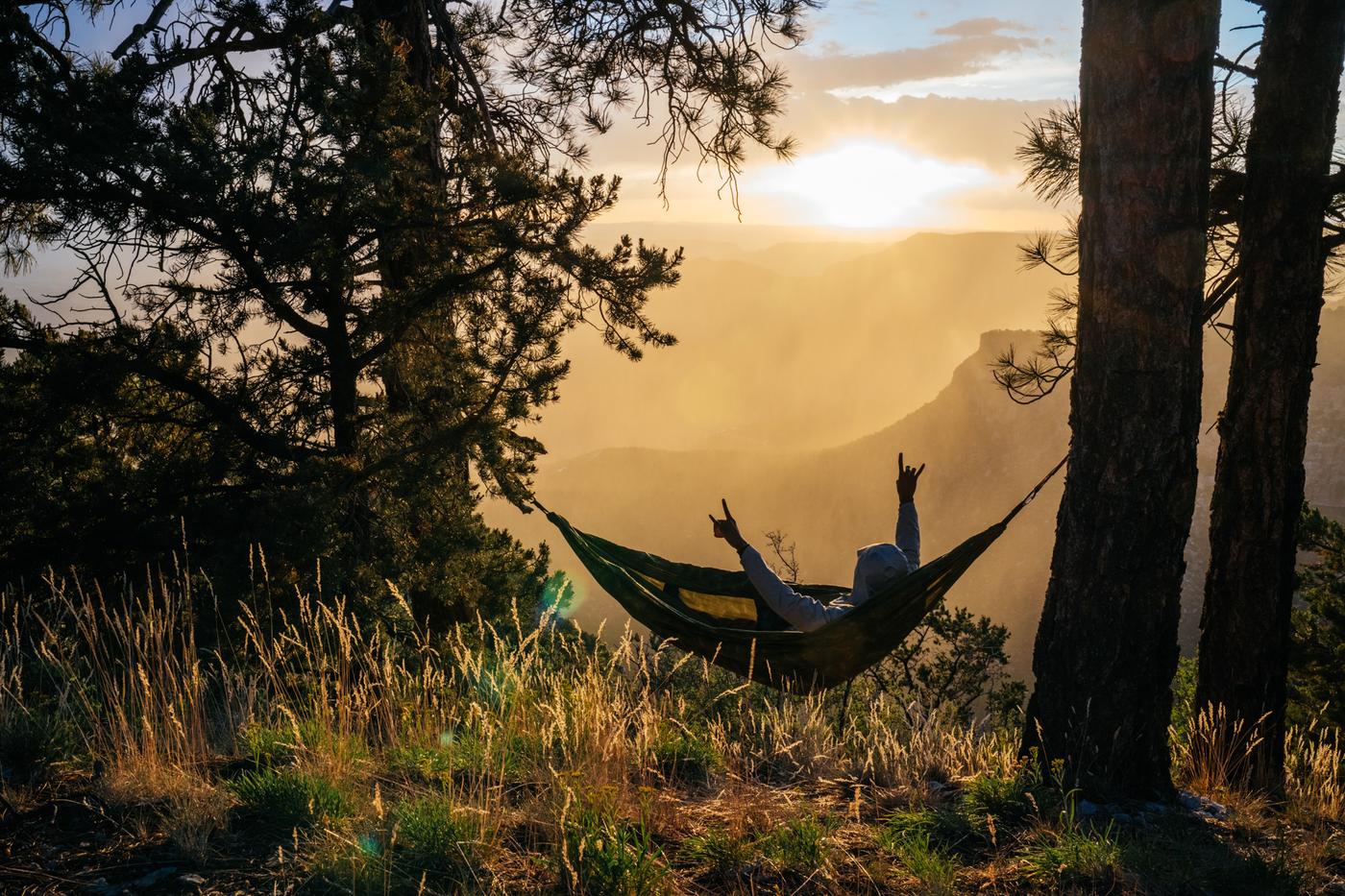 … and of course, the evening did not disappoint!