Heading up to the pass

Leaving the last village I’d see for a couple of days, I picked up some stale bread along with a bag of (slightly less stale) chichasara from the local shop and started the climb to 5000 meters, a height that I’d linger around for the better part of about 80km on the altiplano. 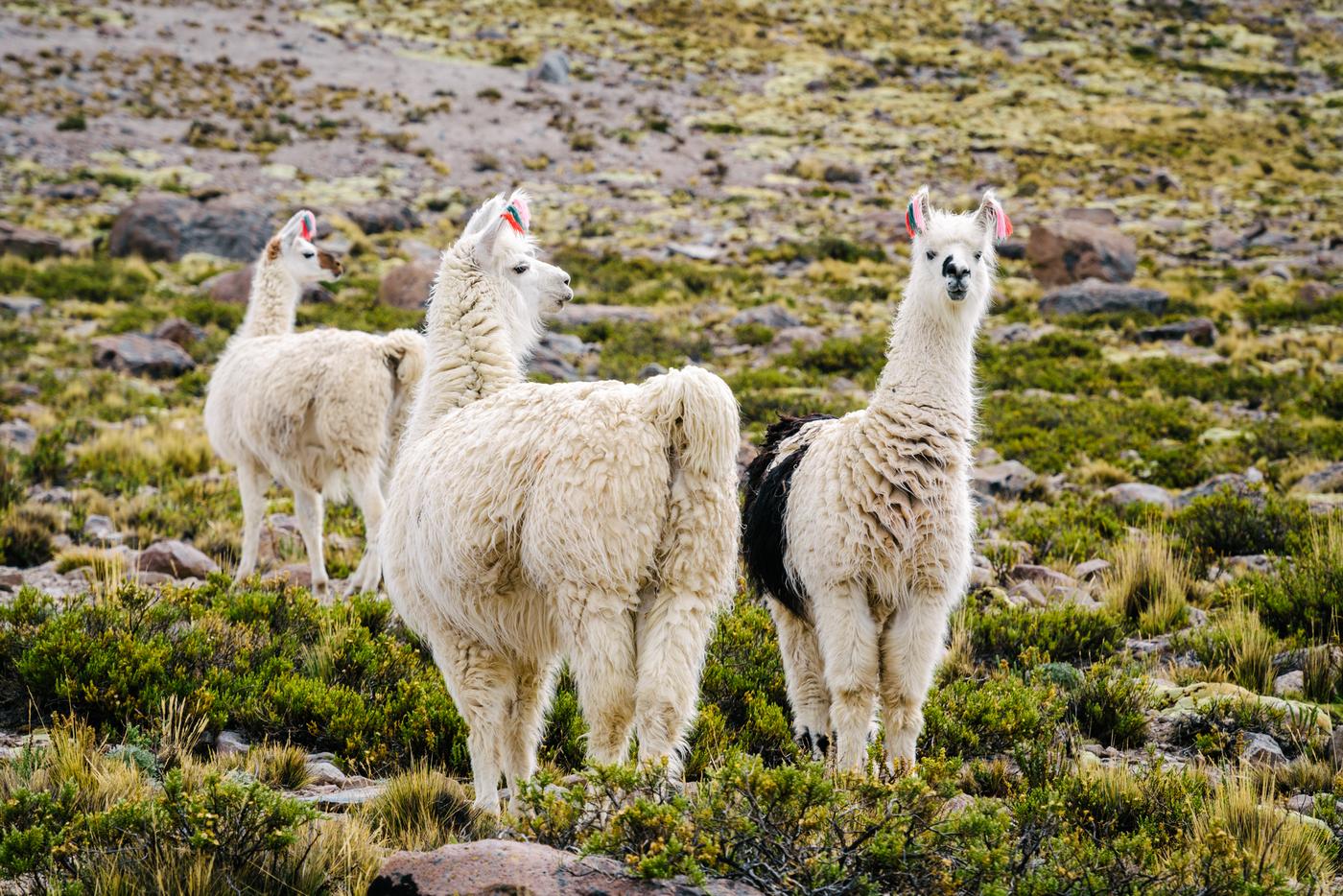 The road was devoid of life outside of a scattering of alpaca and a lone shepherd on a motorcycle who’d descended from his herd to find the designated cell signal spot. From here I had many route options in mind but still hadn’t fully decided which way I’d go once the trail split into a few directions. At this point, my only plan was to get to the first crossroad and go whichever direction felt better at the moment— which valley was calling my name? You pretty much can’t pick a bad direction in the Peruvian Andes and I had enough supplies for any direction I’d take, so I wasn’t overly concerned. 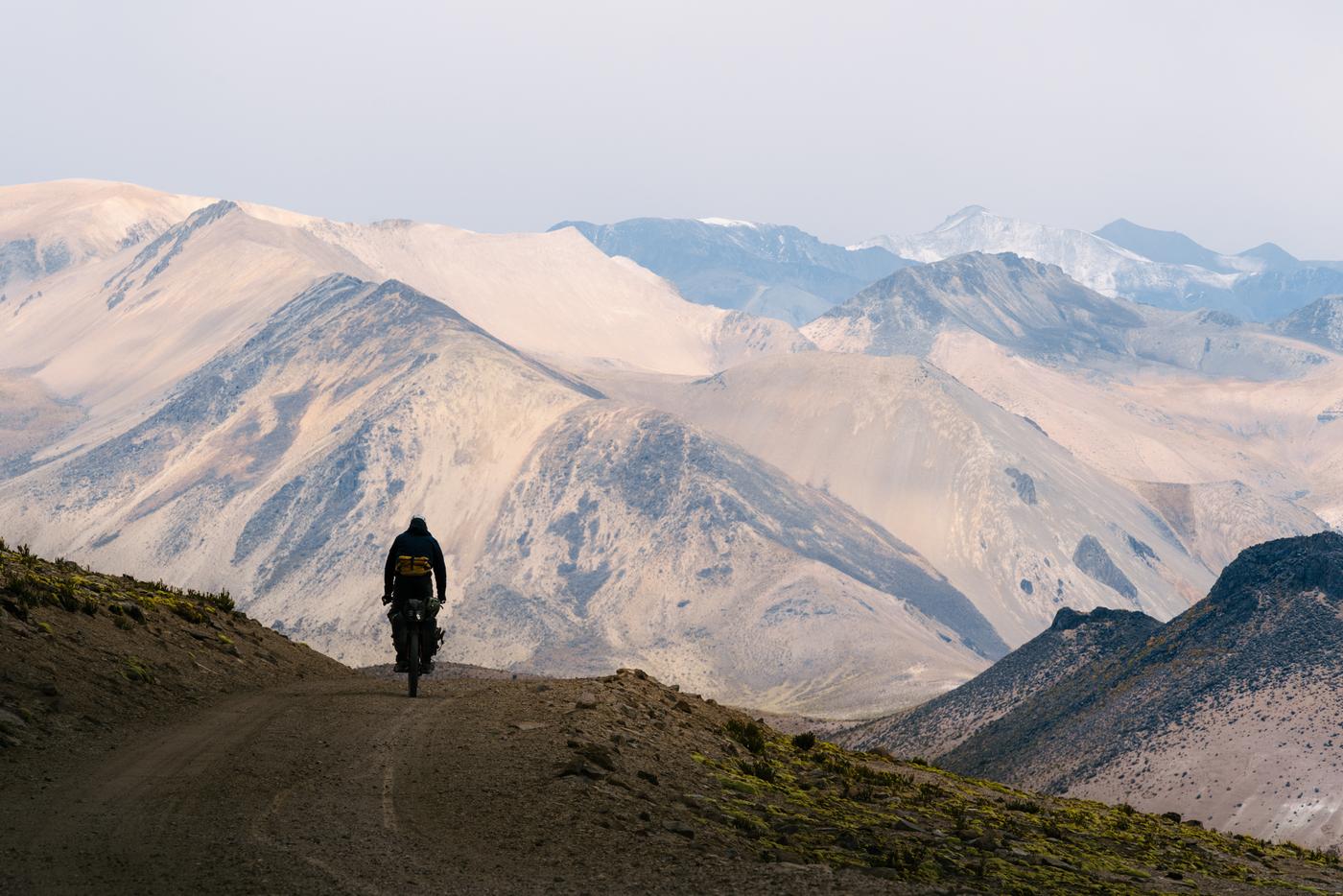 A brief stint of wind and hail up near the pass along with a few scattered hits of lightning on the horizon had me considering if staying up at this altitude for a couple of days straight was such a great idea at this time of year, but I was already so deep into it that there wasn’t much to do but power on.

After heading north toward Pausa Canyon, an area I’d never seen much about but had an interesting topographical profile, I hunkered down in a little valley at 4800m for a cold night amongst the alpaca herds and flowing creeks.  Generally, I’d try to find somewhere a bit lower than this to make for an easier night of sleep, but I had no energy left to try to make it over the next little pass while the sun was already dipping behind the horizon, so I made due. 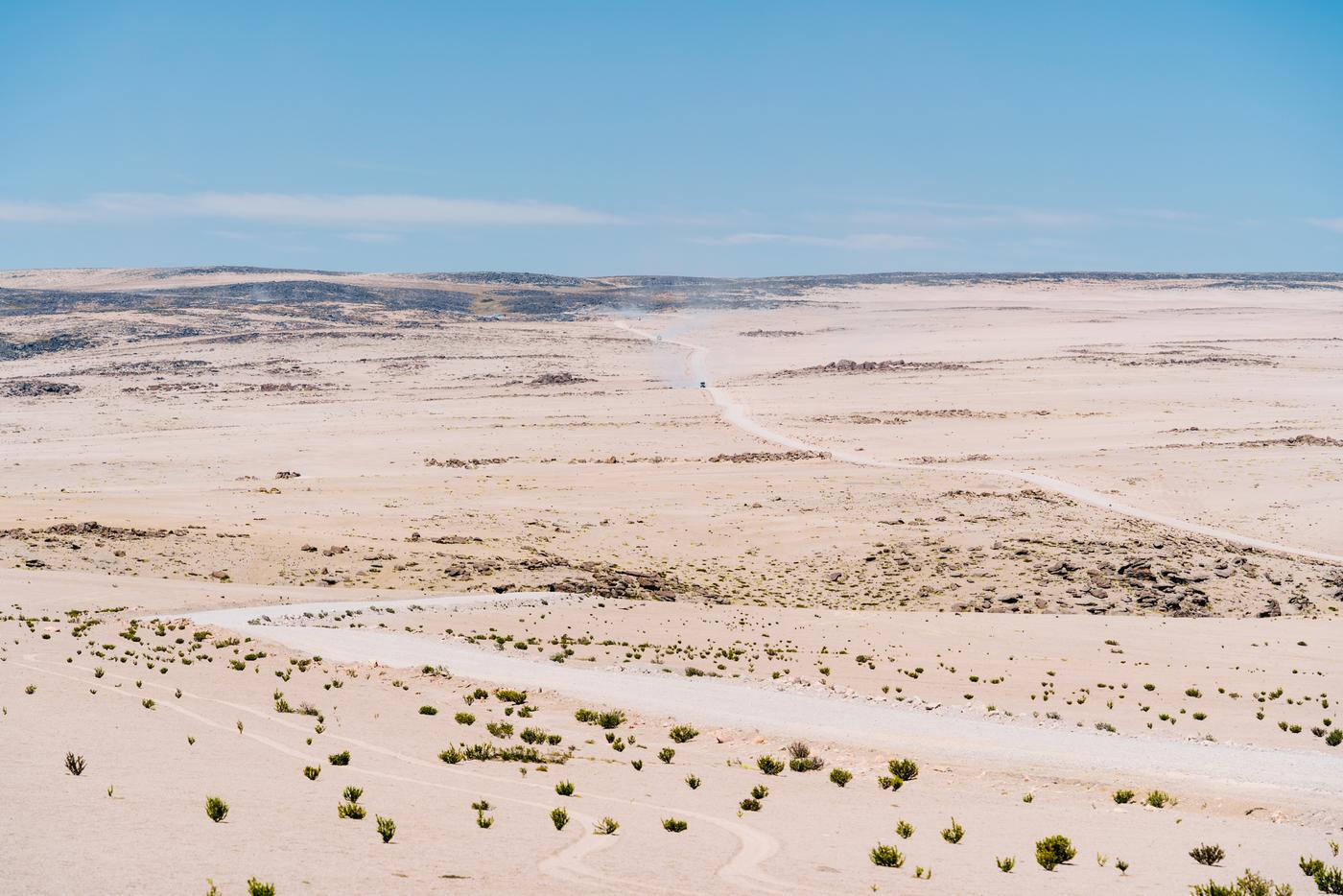 The next morning the storm had subsided but the wind had not. I was treated to one of the most frigid headwinds I’d had in my life as I crossed the barren plateau that looked like something you might see in a Mad Max sequel. 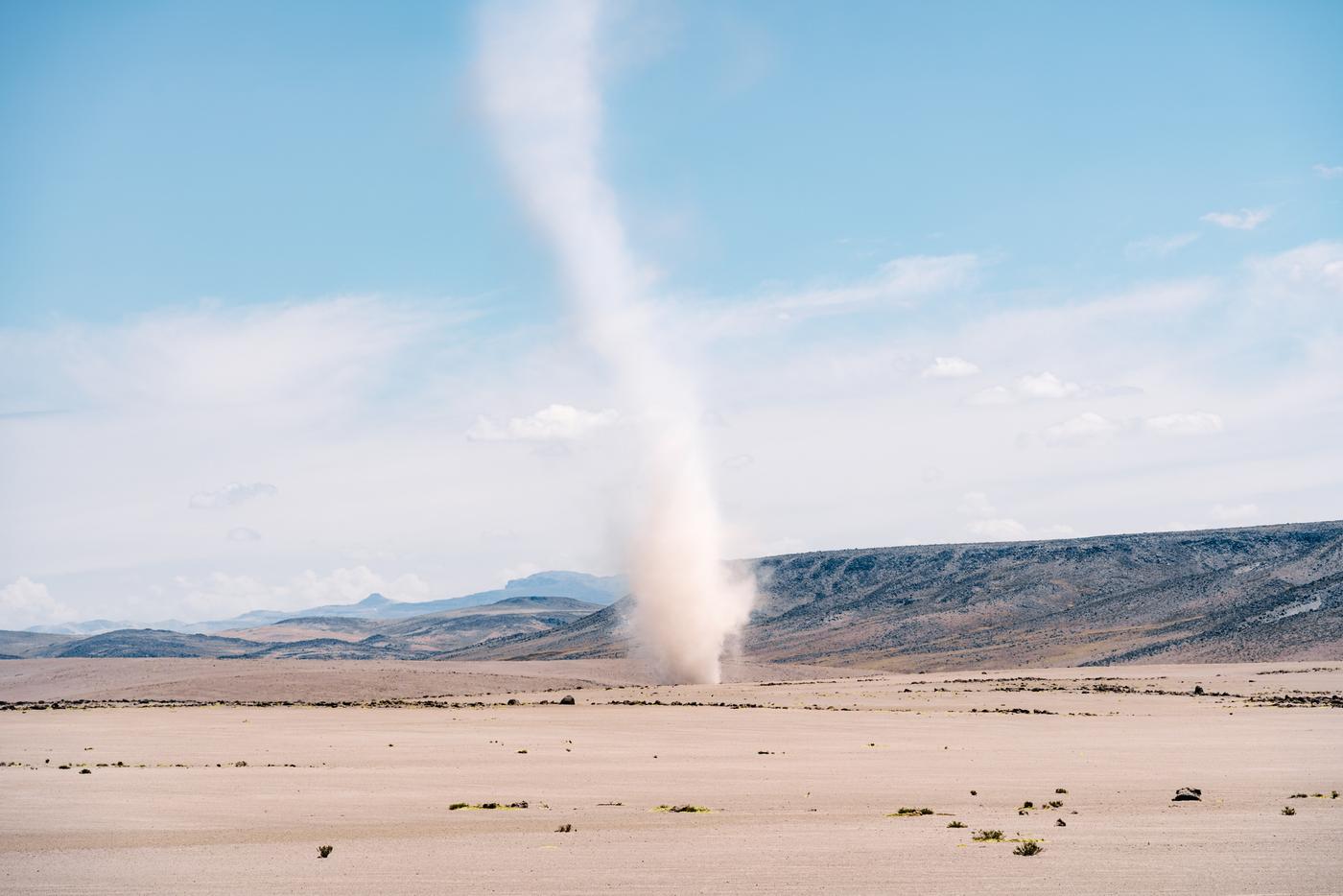 I watched the winds kick up massive dust devils across the horizon while inching along a gravel road that seemed to continue endlessly into the distance and beyond. The one thing that kept this from feeling like I was getting nowhere was the sight of Volcán Auquihuato slowly growing larger in the otherwise featureless void I was pedaling toward. I knew that once I got past the volcano it was only another 10km or so until I’d see the altiplano suddenly drop off into the depths of the canyon below and I’d have the big descent I was dreaming of while looking at the elevation profile. 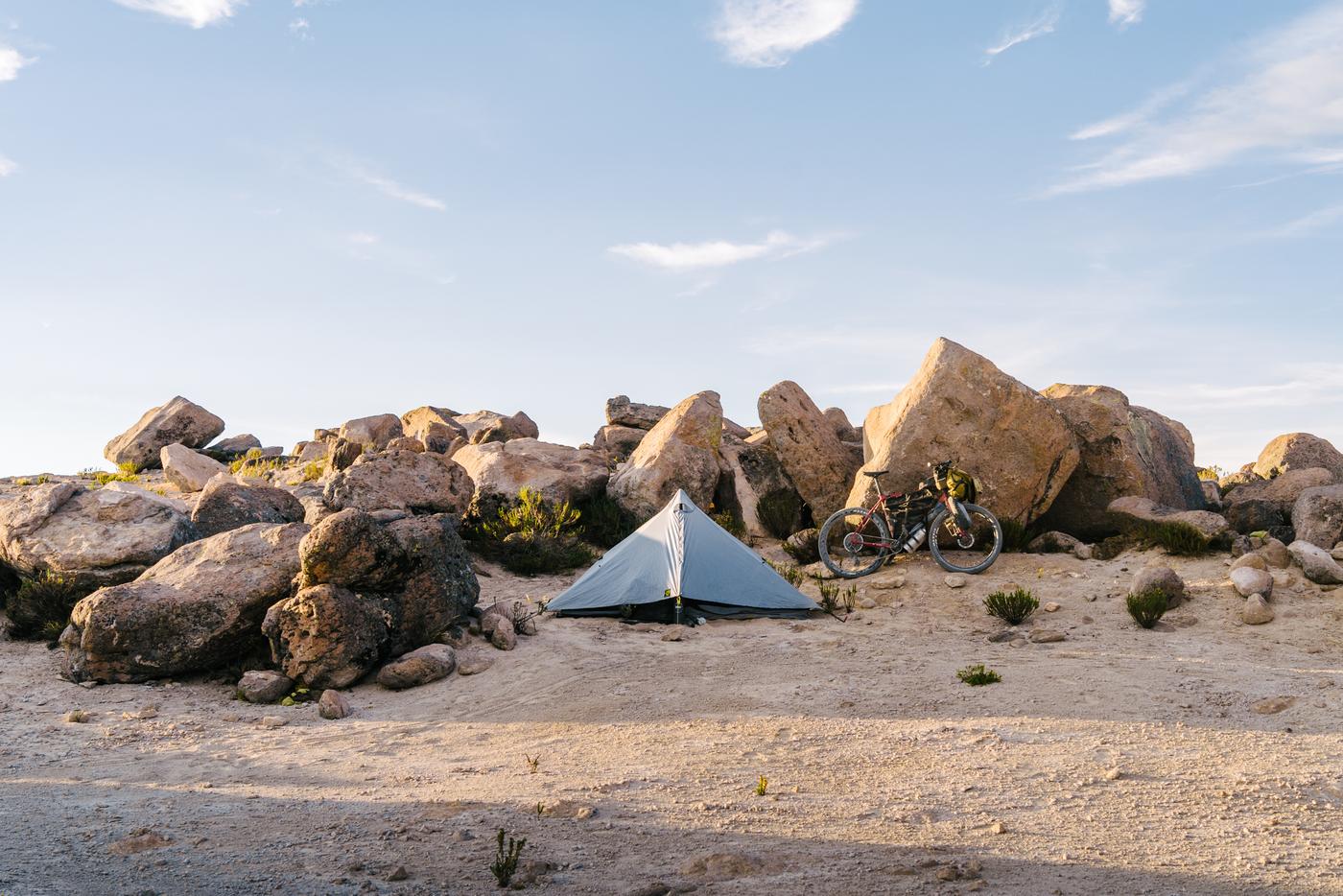 Another cold night passed on the altiplano as I tucked my tent into a field of boulders that was just barely tall enough to tame some of the relentless winds. Water bottles (and toes) were frozen over through the night as I emerged from my down cocoon. I had no choice but to leave early in the morning to try to make some progress on the road before the afternoon gusts really picked up.

After pedaling toward the horizon for a few hours in the morning, the undulations stopped and the landscape dropped thousands of meters down into the canyon below. 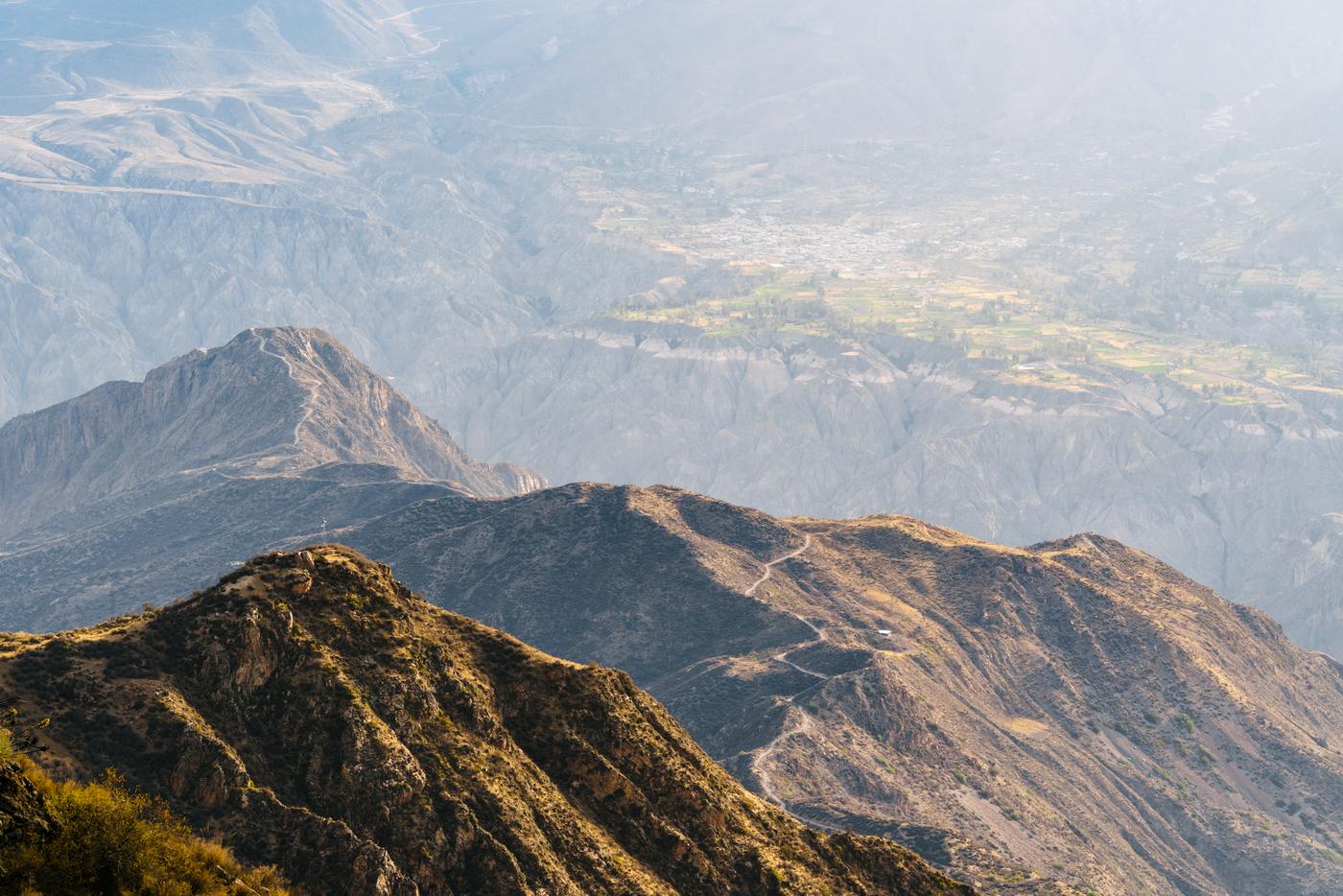 A steep descent led me through many small villages that felt like a different planet from the previous couple of days. Screeching vicuñas were replaced by kids running through the streets playing soccer, though the surroundings were no-less stunning to ride through. 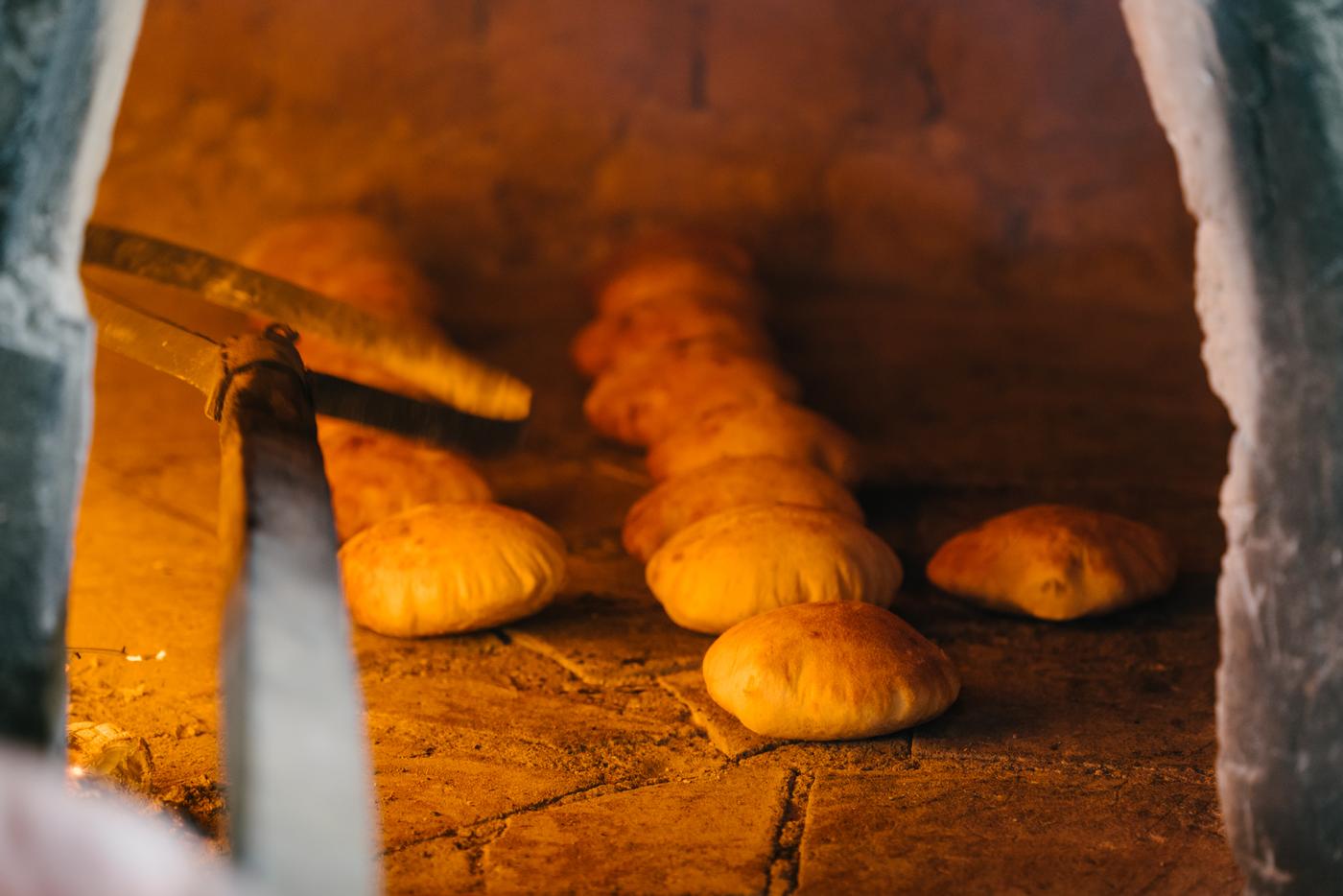 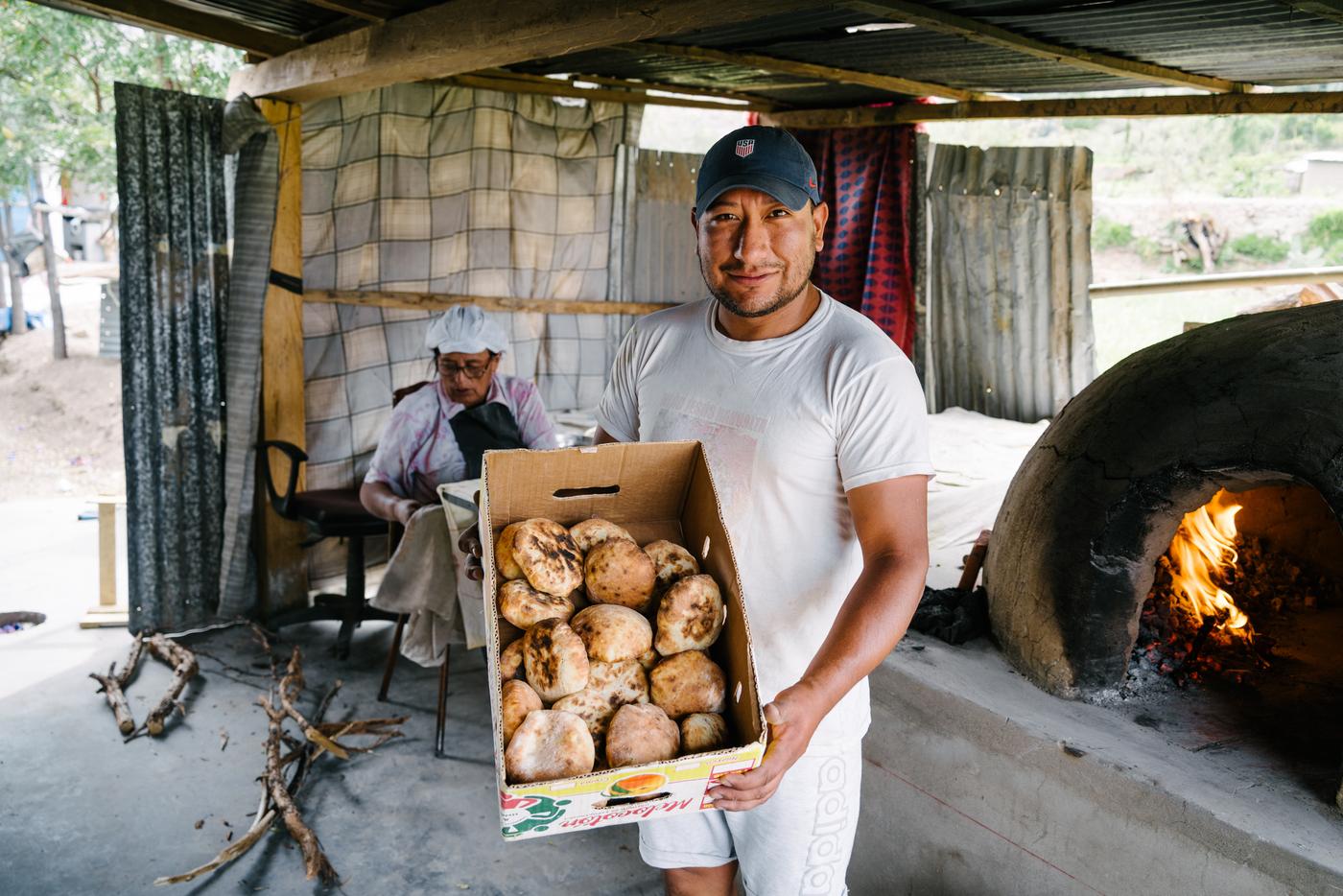 I reached Marcabamba midday and was stopped by some locals hanging out near a shop with “Crystal” cervezas in hand. We weren’t more than a few questions deep into the conversation before someone grabbed another bottle and handed it to me. After continuing for 20 minutes of chatting about why I like riding heavy bikes in big mountains, I was invited to a restaurant owned by the mother of one of my new friends. That turned into an invite to their house, where they’d show me how they make bread in their traditional adobe oven. I didn’t cover many kilometers this day but that’s the beauty of bike touring on a loose schedule. 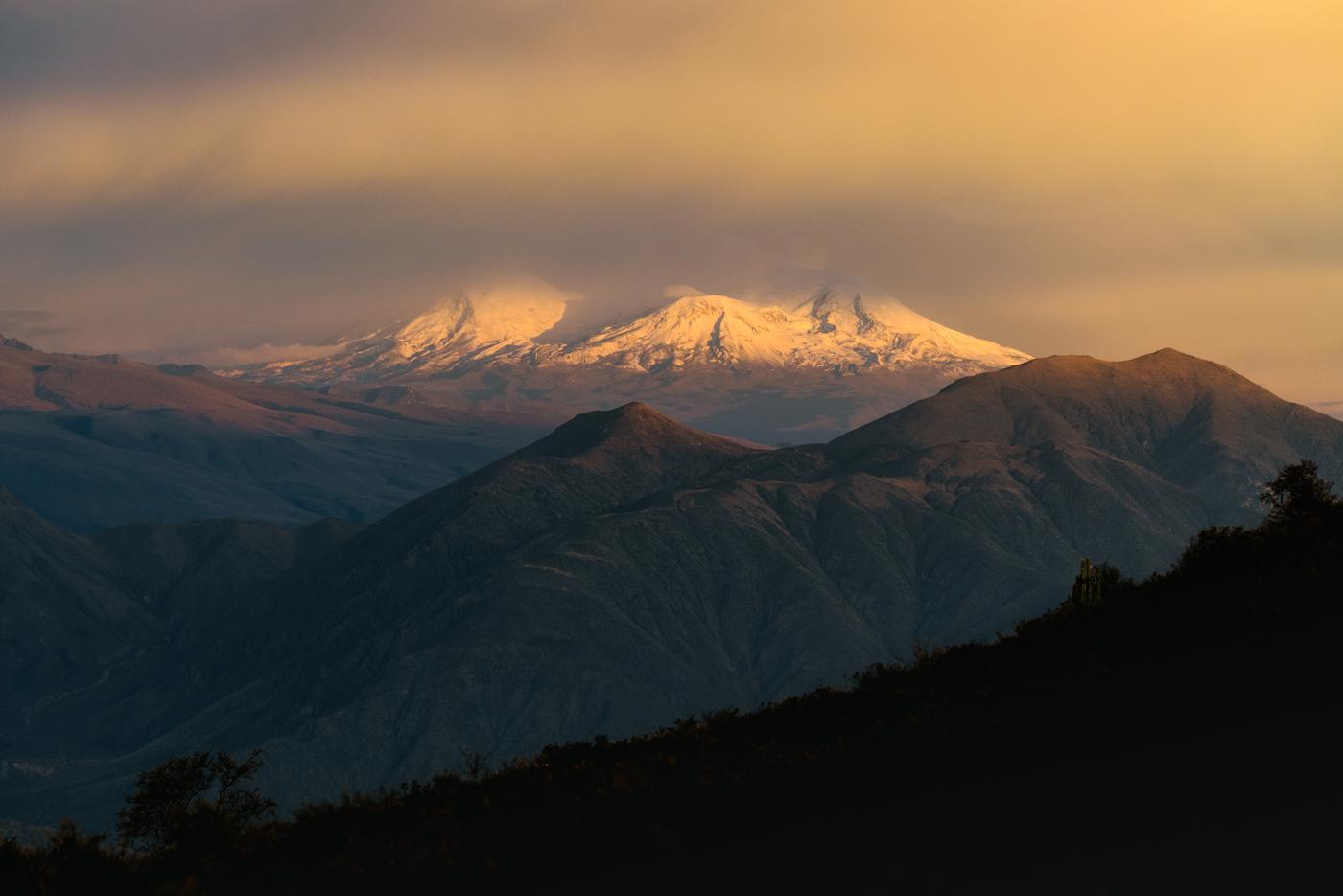 After taking a day to wash clothes and chill in the Plaza de Armas of the town of Pausa, I set off up my last set of climbs, hugging the up edge of the cacti-laced canyon as the road pitched toward the sky. Once again the way was virtually empty, with more company from the occasional Condor soaring overhead than people. Volcán Coropuna was majestically glowing orange in the distance as I dropped my tent in a grove of cacti and settled in for the night. 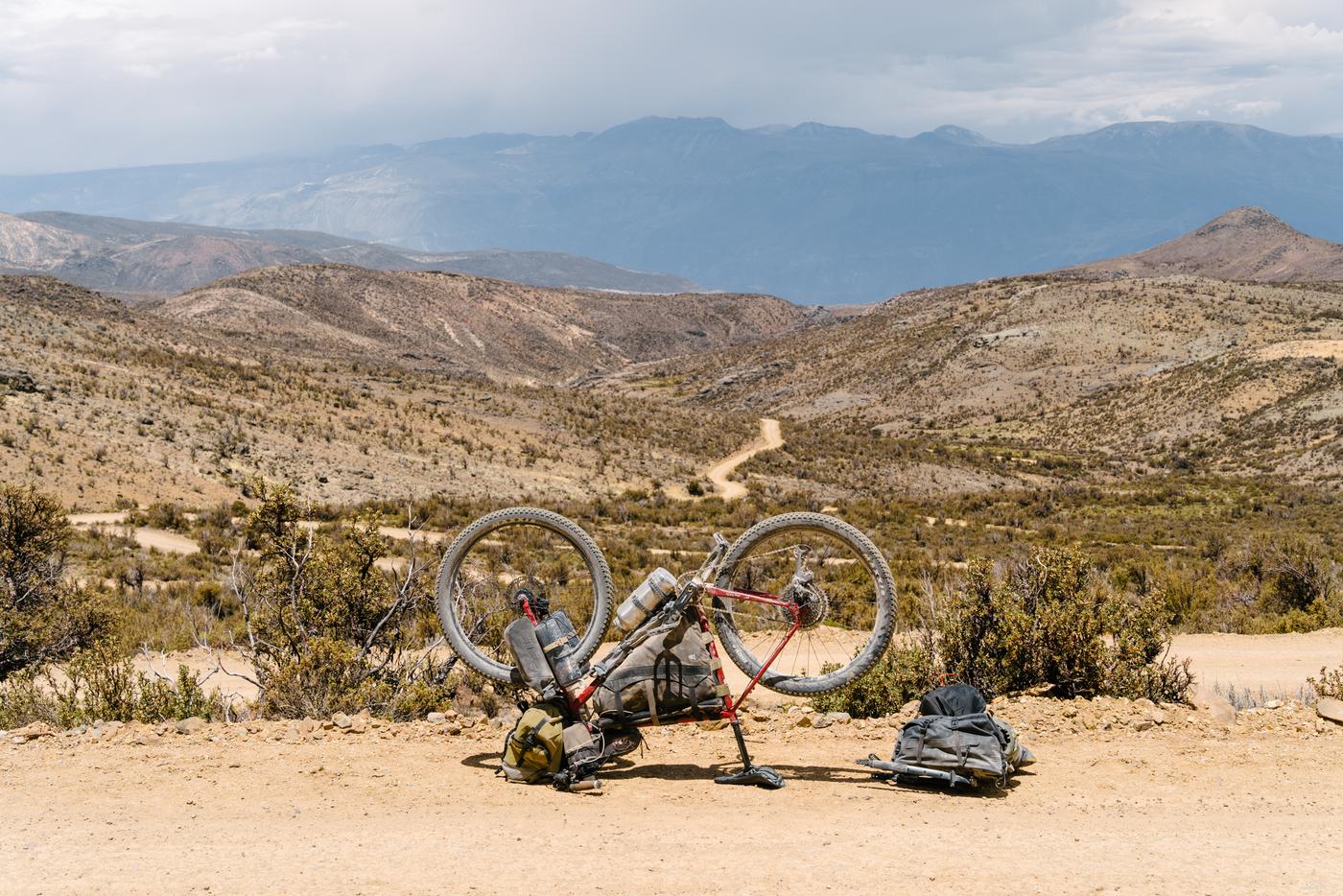 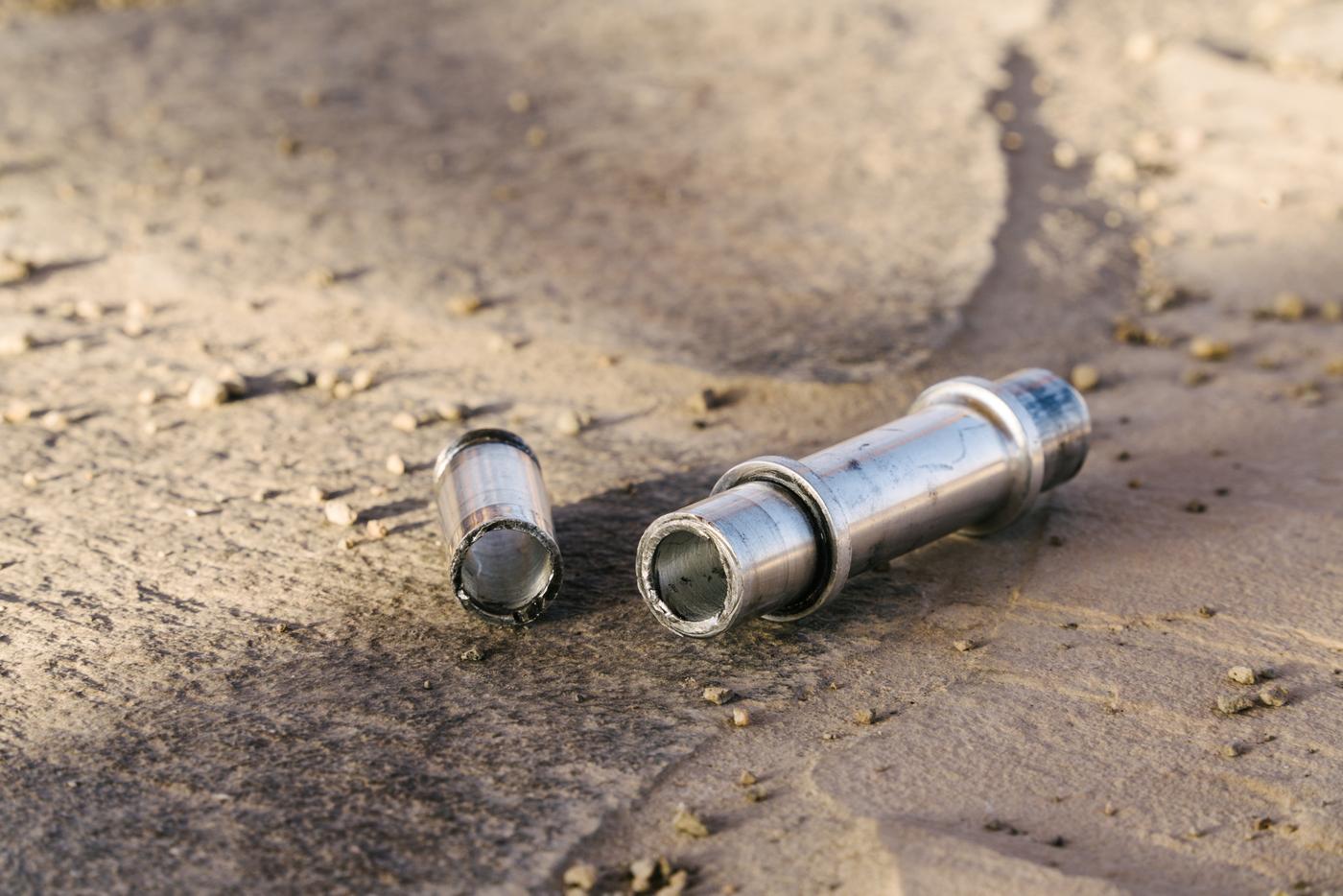 With an hour of pedaling under my belt the next morning, I reached the bottom of the final climb, pushed the pedals one rotation, and heard a strange sound while my crank arms suddenly jumped. My stomach dropped and I stopped to see what happened, flipping the bike over to remove the rear wheel. Upon loosening my skewer I watched the cassette wobble around as if nothing was holding it in place. After a minute or two of confusion and trying to tighten everything up in vain, I realized that the axle inside the hub had fully snapped in half.

Realizing I was SOL (not “sun” en español), I contemplated which direction to go, stuck just about in the middle point between the town I left the previous day and the one I was headed toward.  I could just barely sandwich the cassette between the hub and the frame enough to roll the bike, but the pawls of the hub wouldn’t engage beyond a horrifying grinding sound, so I had to ditch the chain altogether and go the old fashioned way.  By foot.

There were climbs in both directions so the options were looking a little bleak either way.  I also hadn’t seen anyone on the road all day, so I wasn’t counting on getting rescued by a passing truck or bus here.  I’d have to at least make it to the nearest town. 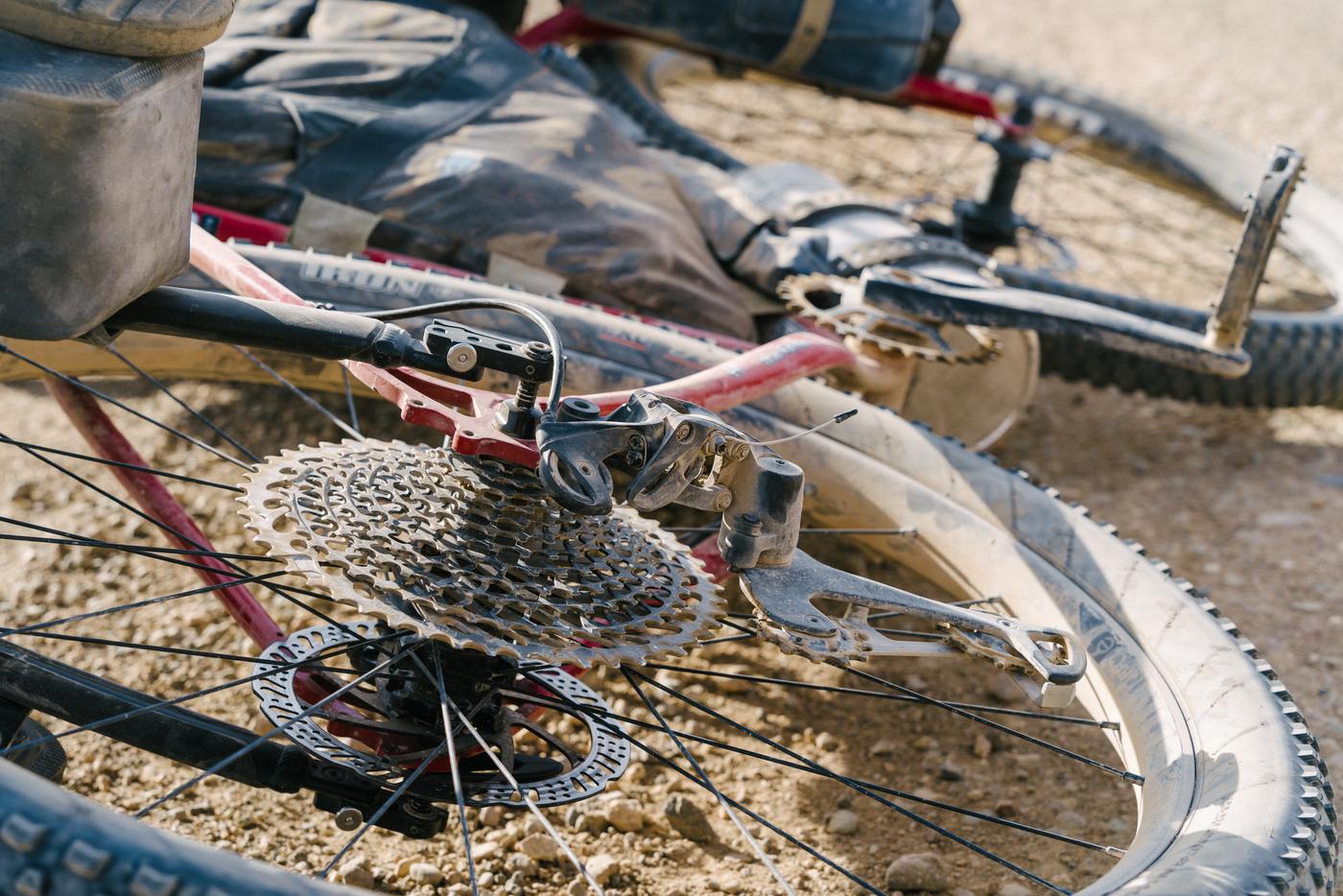 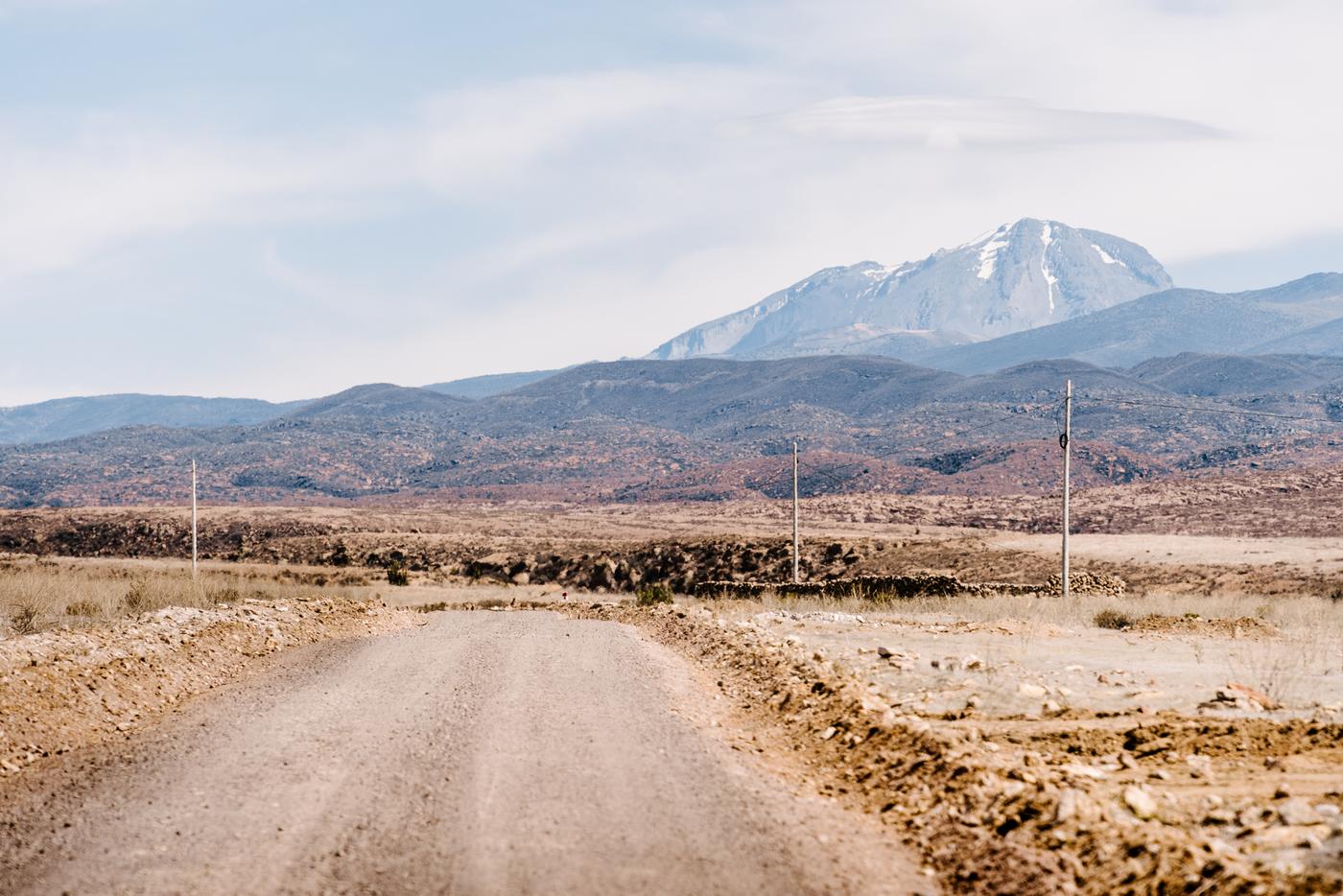 It didn’t take long to decide to continue in the direction I was already riding, pushing up the hill for a few hours until I hit a little descent that I could partially coast down to the village of Cahuacho, where I planned to catch a bus.

To my dismay, I arrived in the tiny village that I had such high hopes for to find that there are only 2 buses that go through per week and the next was in 5 days.

A couple of hours worth of failed attempts at hitchhiking went by on the traffic-less road before I got frustrated with the whole situation, said “fuck it!”, and committed to waking up in the morning at the crack of dawn and walking the 50km to the next town the following day.  Walking is nice too, right?  Why not?

The alarm went off at 4:45am, I loaded up on water, and set out pushing across the arid plateau. Every now and then I’d get lucky and be able to coast down some sections, or I’d try to use one foot to propel myself forward on the ground like I was on a giant skateboard with 27.5+ tires and everything I own strapped to it. 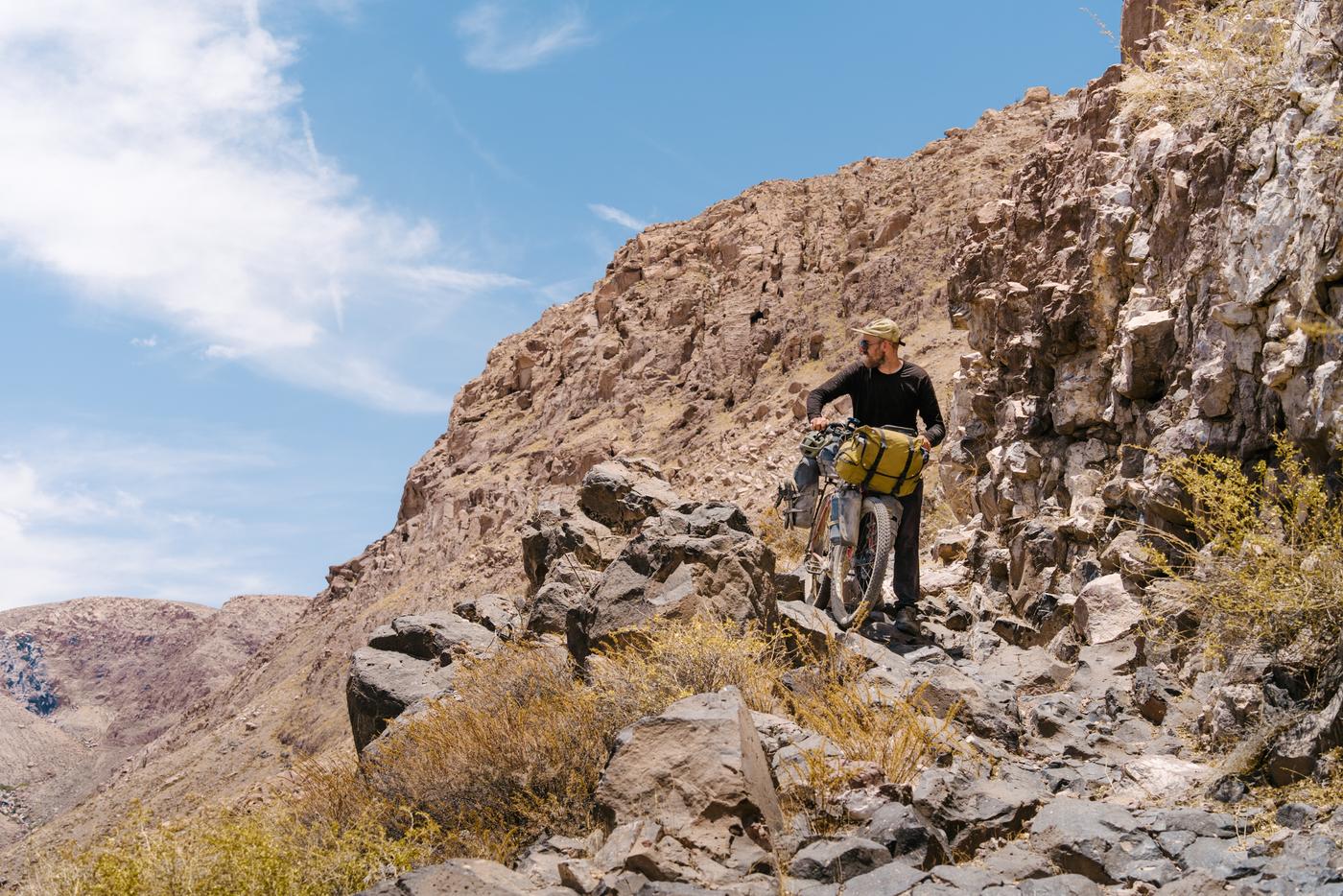 A guy on a horse spotted me walking from a distance about halfway into the day and came up to talk for a moment. The road I was on took a meandering way around to the city but he told me about a shortcut on a “4×4 road” that was much more direct. I thought to myself, “hey cool, what a super nice dude, giving me tips on how to save some time in getting to civilization!”… That is until about three hours later when the “4×4 road” he spoke of turned into a glorified goat trail down a boulder-filled cliff. Suddenly, I was very close to town but still felt so far away as I knew I’d be carrying my bike down this path for at least a couple of hours, aka the last thing I wanted to do at this point. 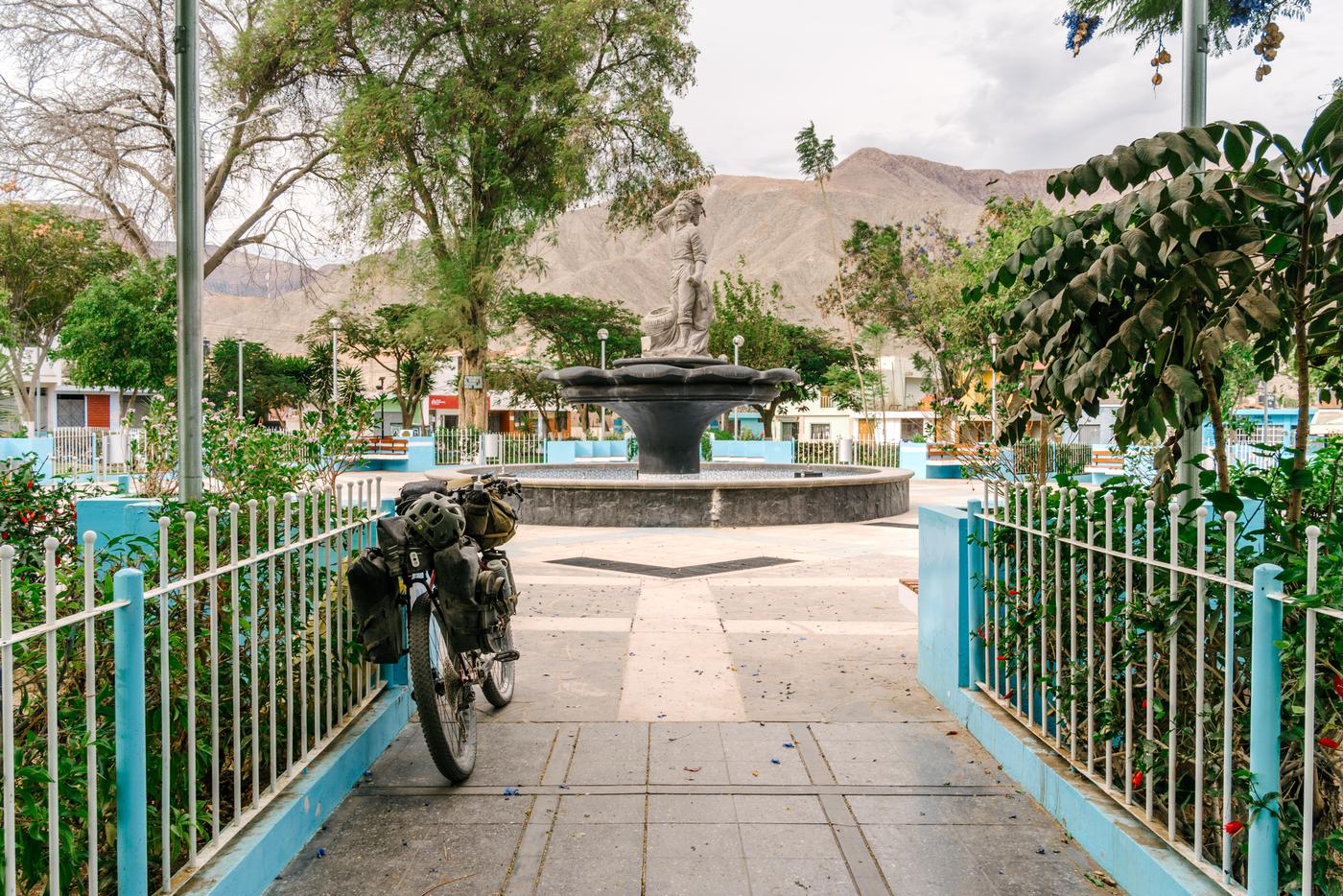 It was a glorious moment when I pushed the final kilometer to the main square of Caravelí, knowing I’d easily find a bus to the big city from here. I downed an ice cream sandwich from the tienda and laughed to myself from the park bench thinking about the absurdity of the last two days walking my fully loaded bike through the desert for nearly 90km. 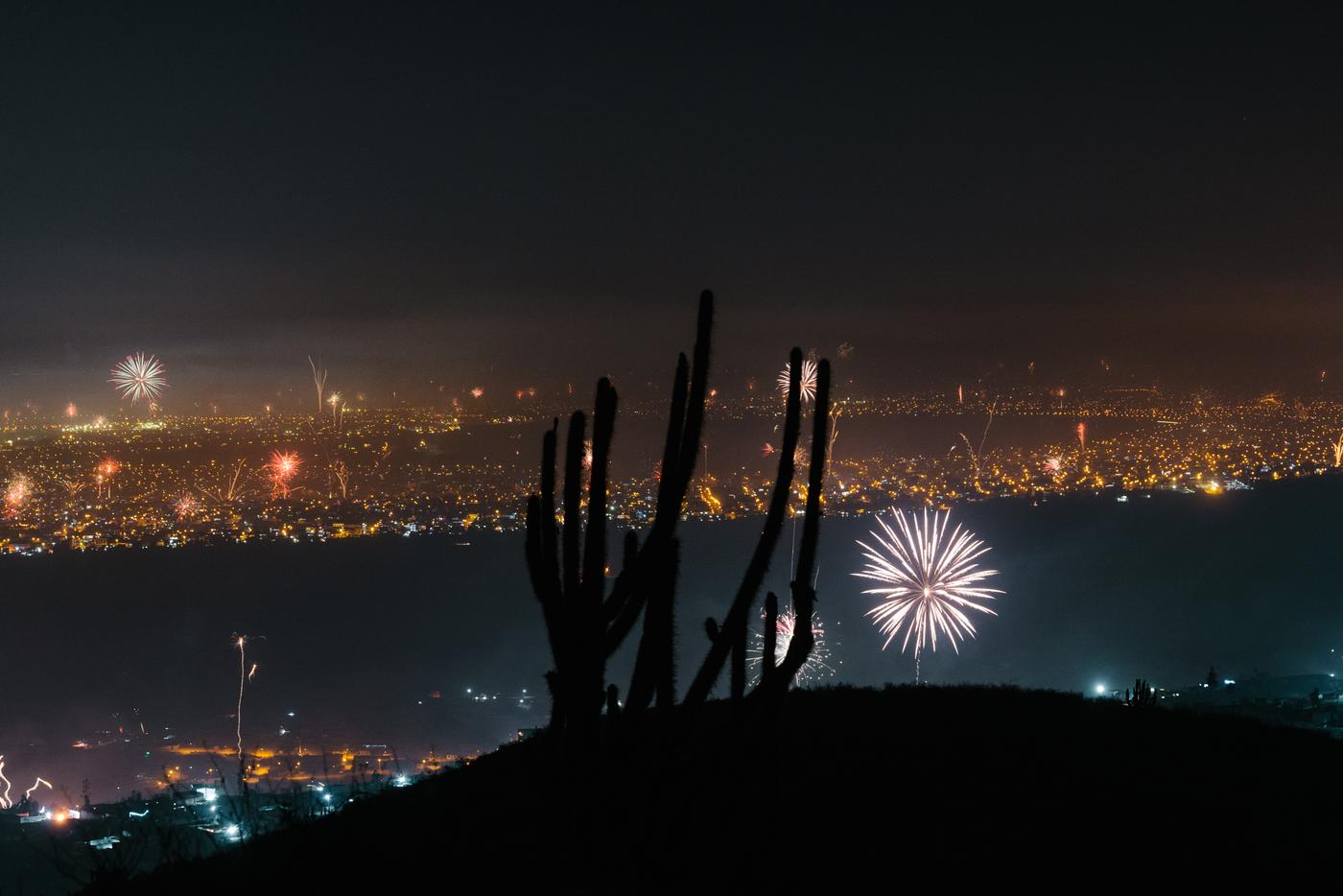 I waited back in the city of Arequipa for replacement parts to arrive (thanks John!) while I contemplated my next move.  As the Peruvian wet season kicked into high gear I got well acquainted with all of the local roads and trails around town and picked out a few nice campsites above the city where I’d watch the chaos of New Year’s Eve in Peru unfold from above. It was a new year and I was heading for a country I missed out on during my first trip through the South American Andes… Colombia.