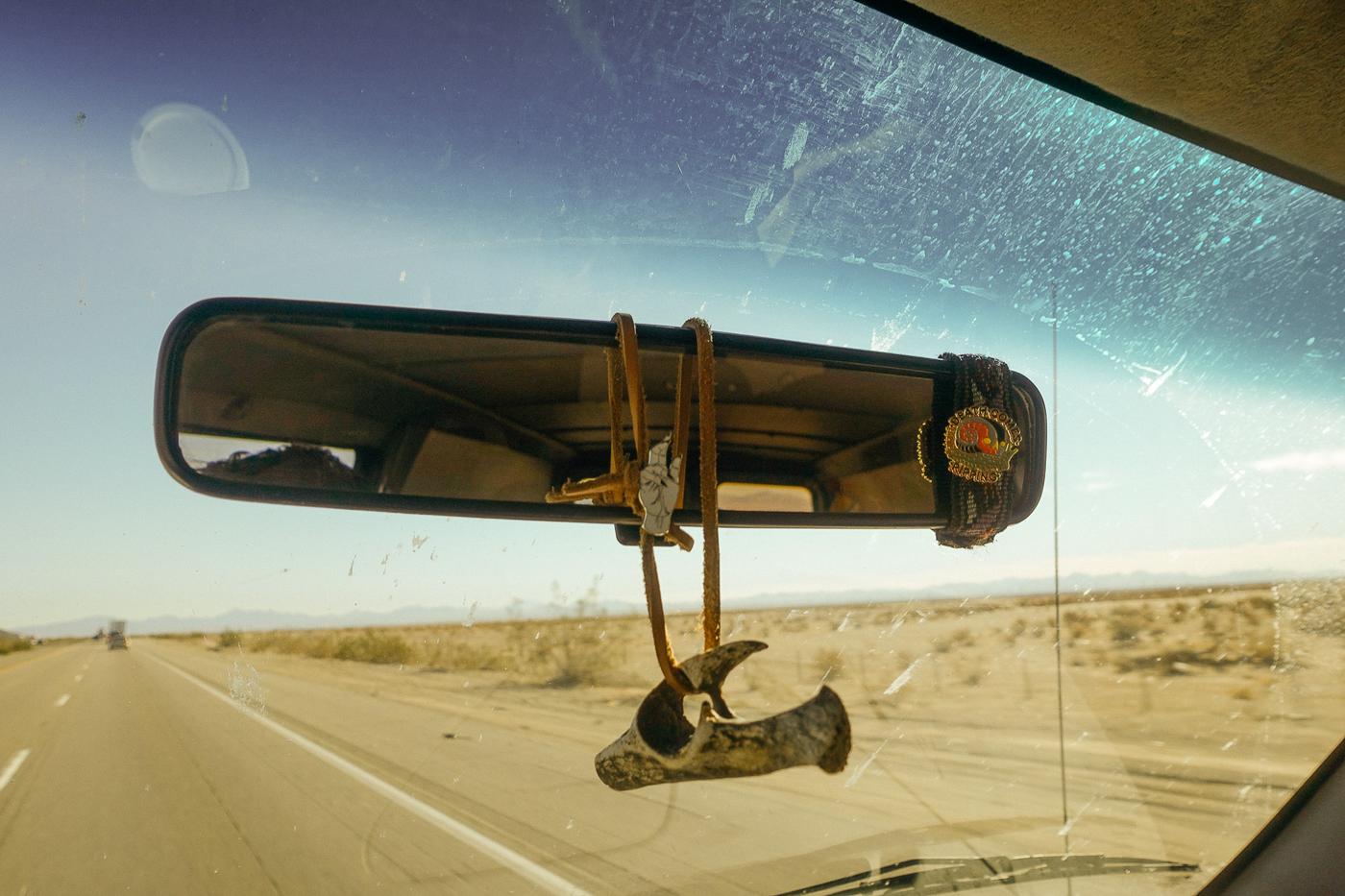 No plans were made on my part other then heading towards the final destination. I decided I would take two days for the drive. “White Sands sounds cool, yeah, I’ll head towards White Sands.” Having done no research, I reached White Sands only to realize there are only two campsites I could find within a decent range of the Monument, both of which closed their gates before I got to them. That left me with a decision to make: keep driving or go big with a hotel for the night. I decided on a hotel, which was quickly downgraded to parking lot once I exited the highway and saw a big bright Walmart sign. Walmart parking lot it was, right after purchasing the finest beers and top ramen they had to offer and then consuming them. 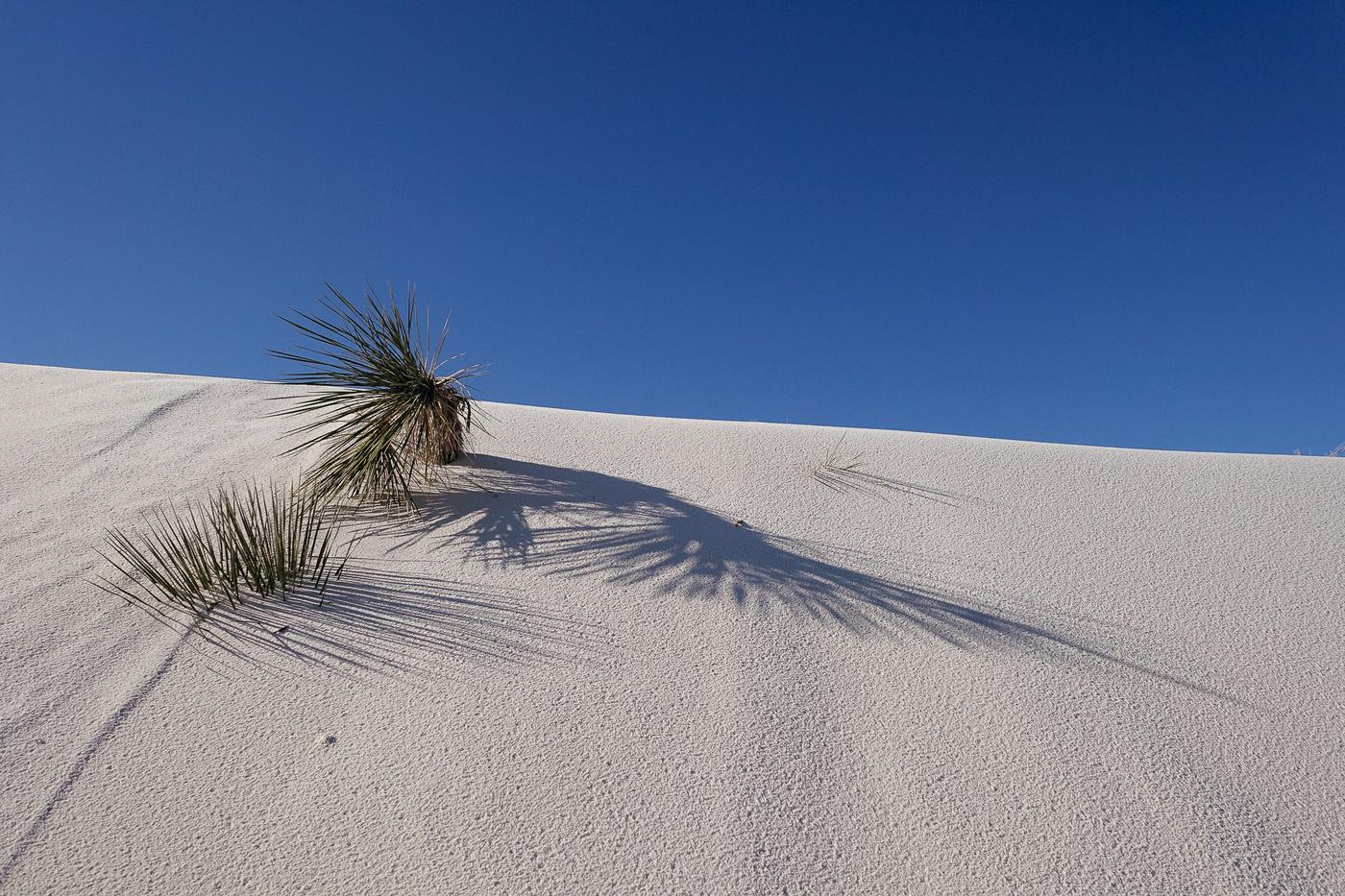 White Sands the next morning to make coffee. The sand was white and coffee was black. 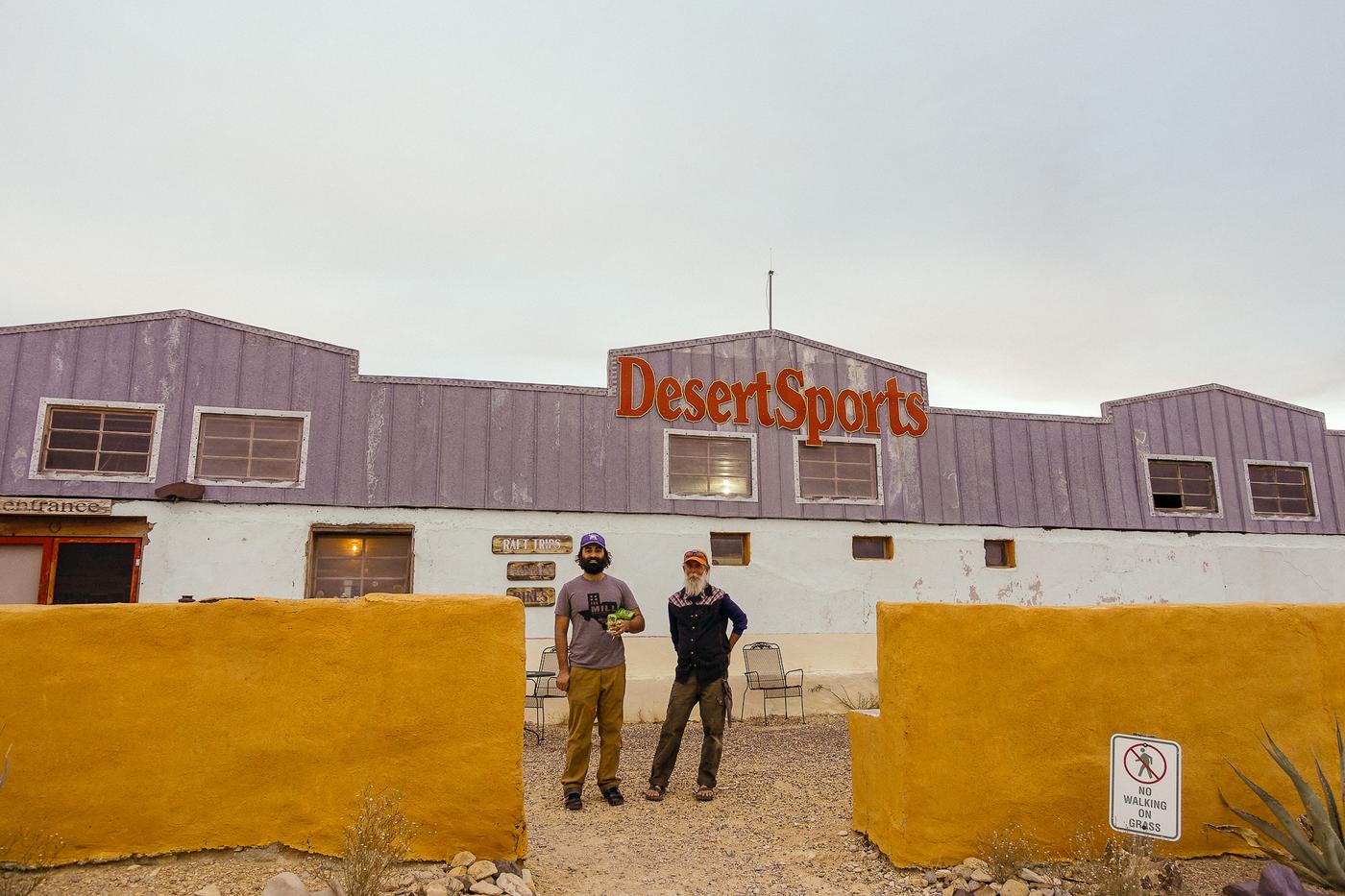 Once I got into Terlingua I was welcomed at Desert Sports by a cold beer and two bearded men discussing route options through the state park. To this point all I had really asked Jesse or knew about the trip was the amount of time we were planning to be out, didn’t really care about much else. We drank and ate at the local spot while watching local music and talking to locals of the town- was this heaven? Woke up next to the Rio Grande and watched the sunrise over Mexico- was THIS heaven? I know the “Alpine start” as the type of start where you wake up before the sun, you deal with the cold and dark and get going as early as you can for a long day. Jesse and I did basically just that, but the complete opposite. We slept in a bit and slowly made our way to the park office for our permits. Then we slowly packed, then unpacked, then repacked, then talked to the local river guide chick we saw at the bar the night before. Eventually we parked the cars out back of the office, then set off into the desert for four full days of no service and only two certain water sources. Heaven? Oh, we also filled the only two cycling water bottles either of us brought with pure American Whiskey. Heaven. We rode singletrack, 4×4 roads, the wrong way into the hills (twice), explored an old mine and ranch house. We made it to our destination despite all our detours and getting sidetracked exploring the desert. Have I mentioned the ungodly amount of water we carried the entire way? No? Well it was dumb, almost as dumb as the amount I carried through the Mojave Desert a few years ago, but luckily on this trip there were two of us so we could sort of split up the weight between us. Dinner consisted of dehydrated venison chile made from a deer that Jesse himself harvested and prepared last season. 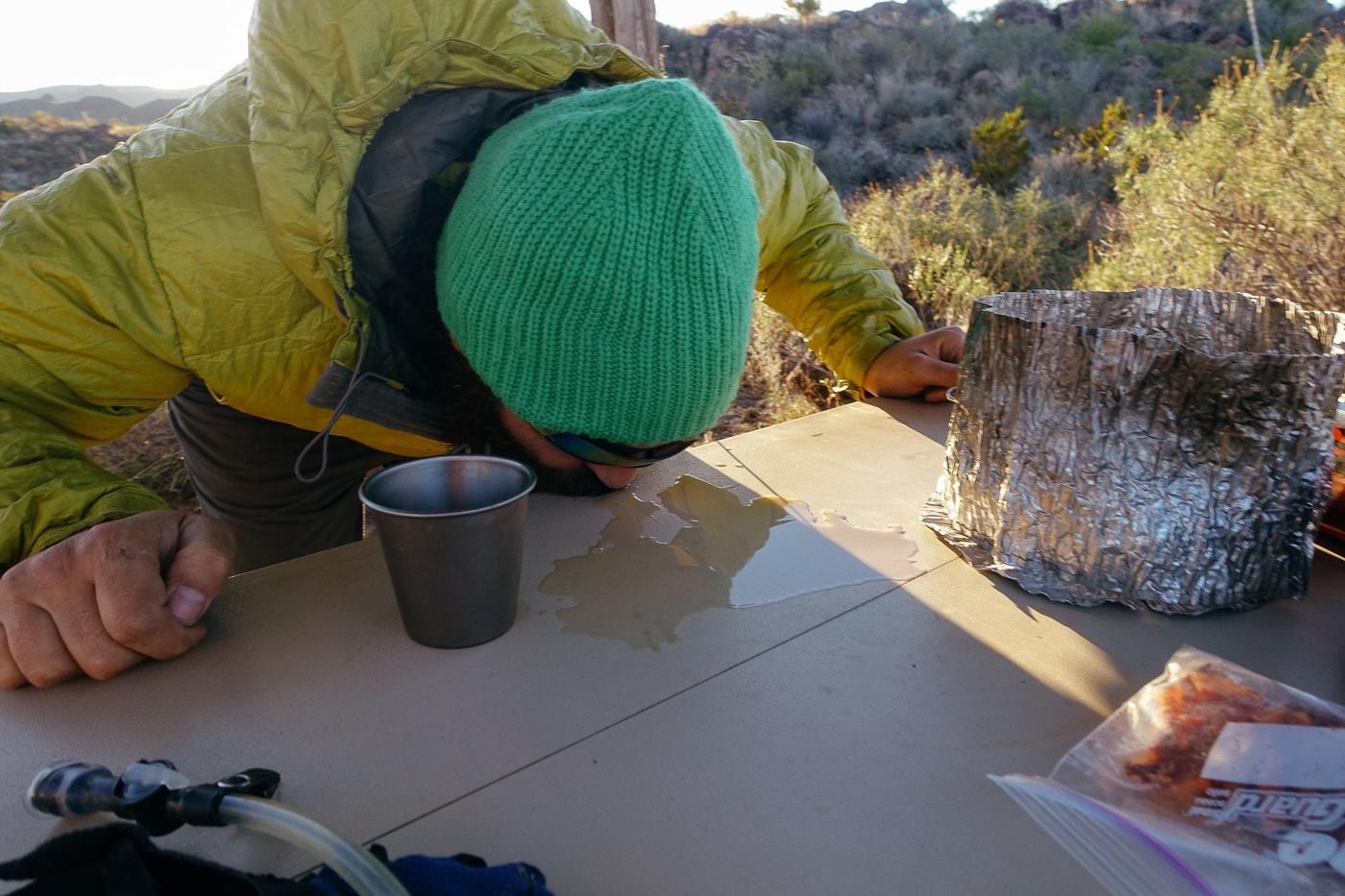 I will use this moment to bring up a particular event that yet again proves the shared mentality on trips between Jesse and I. While making dinner, Jesse made the very large mistake of spilling over his cup filled with the very precious liquid in whiskey form. Without delay he quickly put his mouth upon the filthy whiskey covered table and salvaged as much as he could handle from the table, like a man, and making Chet very proud as he watched us via satellite. If you don’t know who Chet Bearclaw is then uuuhhhh well, I am not sure what to say here. 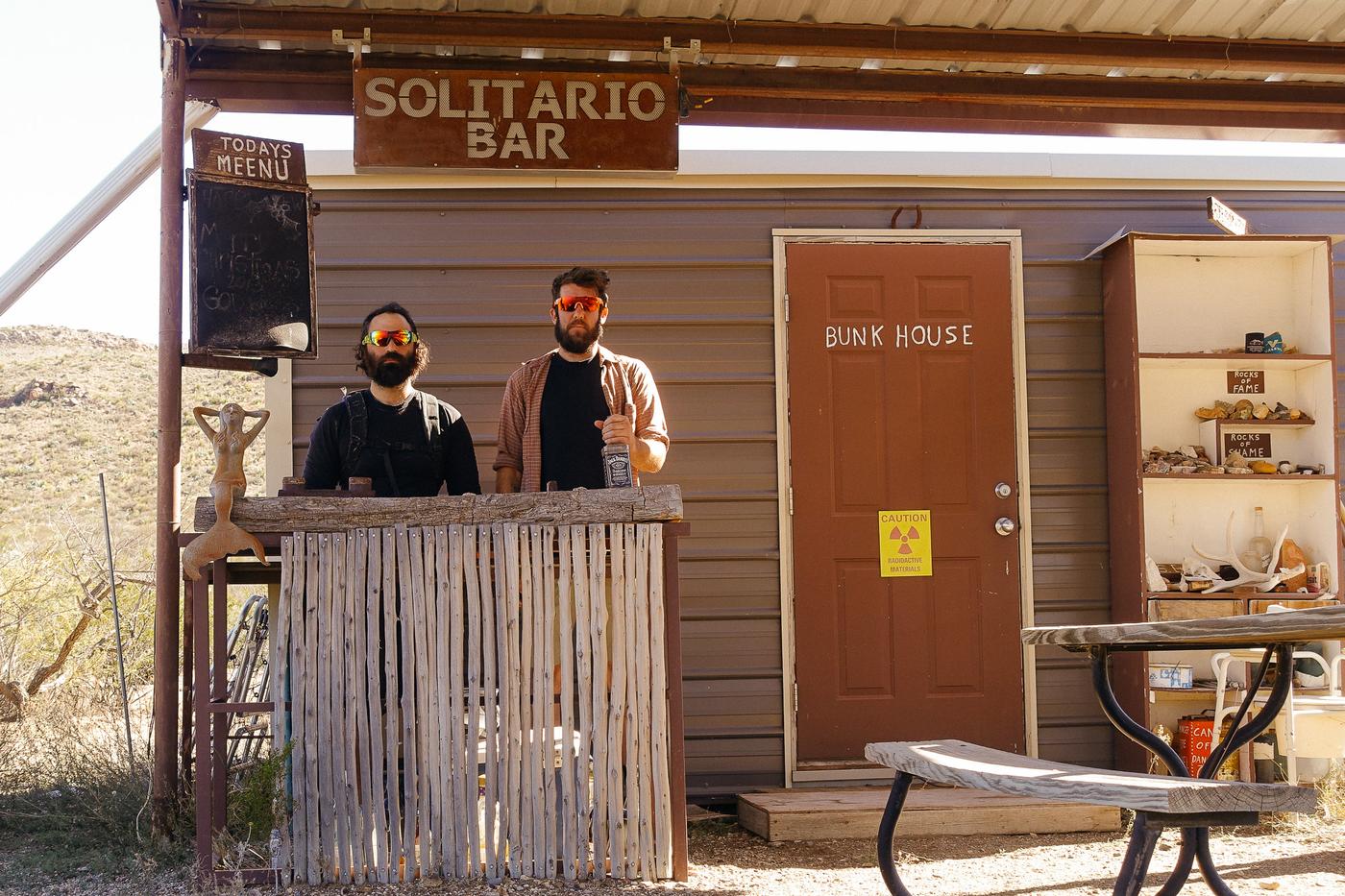 Highlights of day two were finding a bar in the middle of the desert that had COLD BEER, endless desert scenery, and water. I will let the photos do the talking on day two, mostly because I am pretty tired of typing at this point. Day three, I think we got water this day somewhere. We came across a guy with his RD hose clamped to his frame and struggling to make his way out, we gave him high fives and sent him on his way. We also tried finding a few trails this day that were on our map but uuuhhh maybe not used for a seriously long time. This resulted in Jesse putting a few holes in his sleeping pad, which he had placed in a very well thought out spot on his bike. He had it right in front on his handle bar harness. That way every fucking stupid goddamn bush with ridiculous spikes would put a hole in his pad. Have you ever watched those shows on tv where they put themselves in messed up situations just to show you how to get out of them? Well this is what we did, we wanted to to show you all out there in the internet world how to deal with a sleeping pad that you basically threw into a cactus patch then sat on for no reason at all. Let’s just say Park Tools Pre-Glued Super Patch Kits work pretty well for more then just patching tubes (Dear Park Tools, please email me so you know where to send my check, thanks). 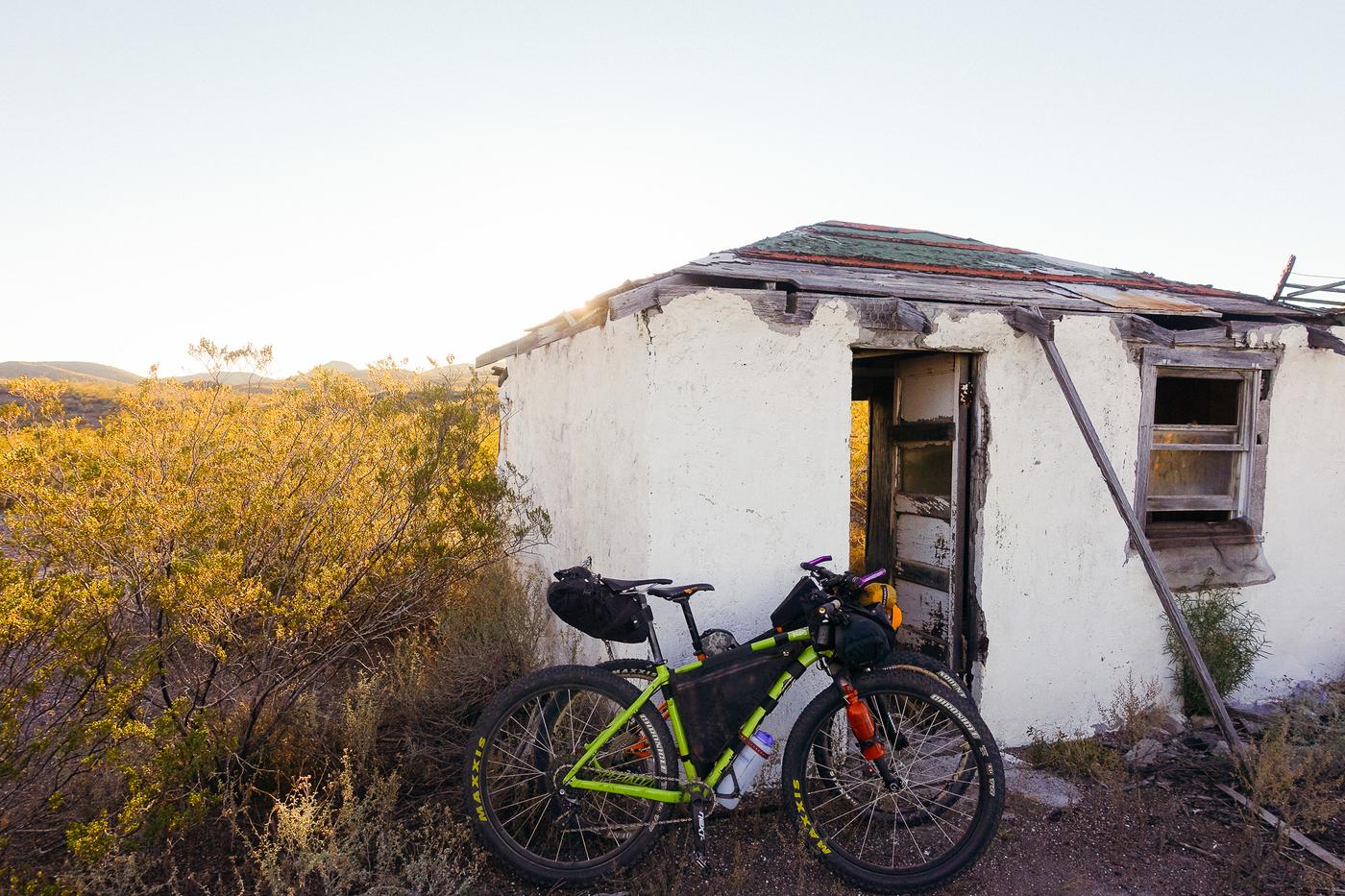 I think we spent that night camped near an old ranching shack taking photos of the stars and shit. I don’t even know what day we are on at this point, not even sure what trip I am writing about anymore really. The pictures will maybe tell the story best, or not, either way there is just way too much to even touch on with this trip. We made it out the last day, back to our cars, back to our working phones, back to the chaos that was reality at that moment. Jesse received some unfortunate family news that would draw him out of the desert sooner then we wanted. We stayed that one last night in town, again watching local music in the local bar talking to locals about the desert. We headed off in our separate ways after some good coffee paired with breakfast burritos from a tiny cafe in a ghost town. I headed towards Tucson after spending an hour at a border patrol checkpoint because the dog signaled my van for “hidden bodies or narcotics”. Jesse headed to Austin but was set back by a flat tire and a spare you apparently aren’t supposed to use because it ruins your cool rally car if you do. Tucson, oh Tucson, well we can leave this story for a later date maybe. Needless to say, what better a way to end this sort of trip then with a hand made cup filled with whiskey next to a fire in a handbuilt home at the end of a dirt road.