Flashback a bit, for those who are new to the site, or in case you missed out. I was flown out to Nagoya to partake in the Chris King Gourmet Century. When the option arose to stay a little longer and do a bicycle tour around Mt. Fuji and then some, I gladly accepted. At this point, my partner, Cari was more than jealous. Having never been to Japan, she was infinitely jealous of my itinerary and as the Instagram and blog posts started rolling in, a call for action was requested. Mostly on my part. We both worked on plans for a week-long tourism tour of Japan, using their amazingly-connected public transit system and winging it in terms of hotels or hostels. 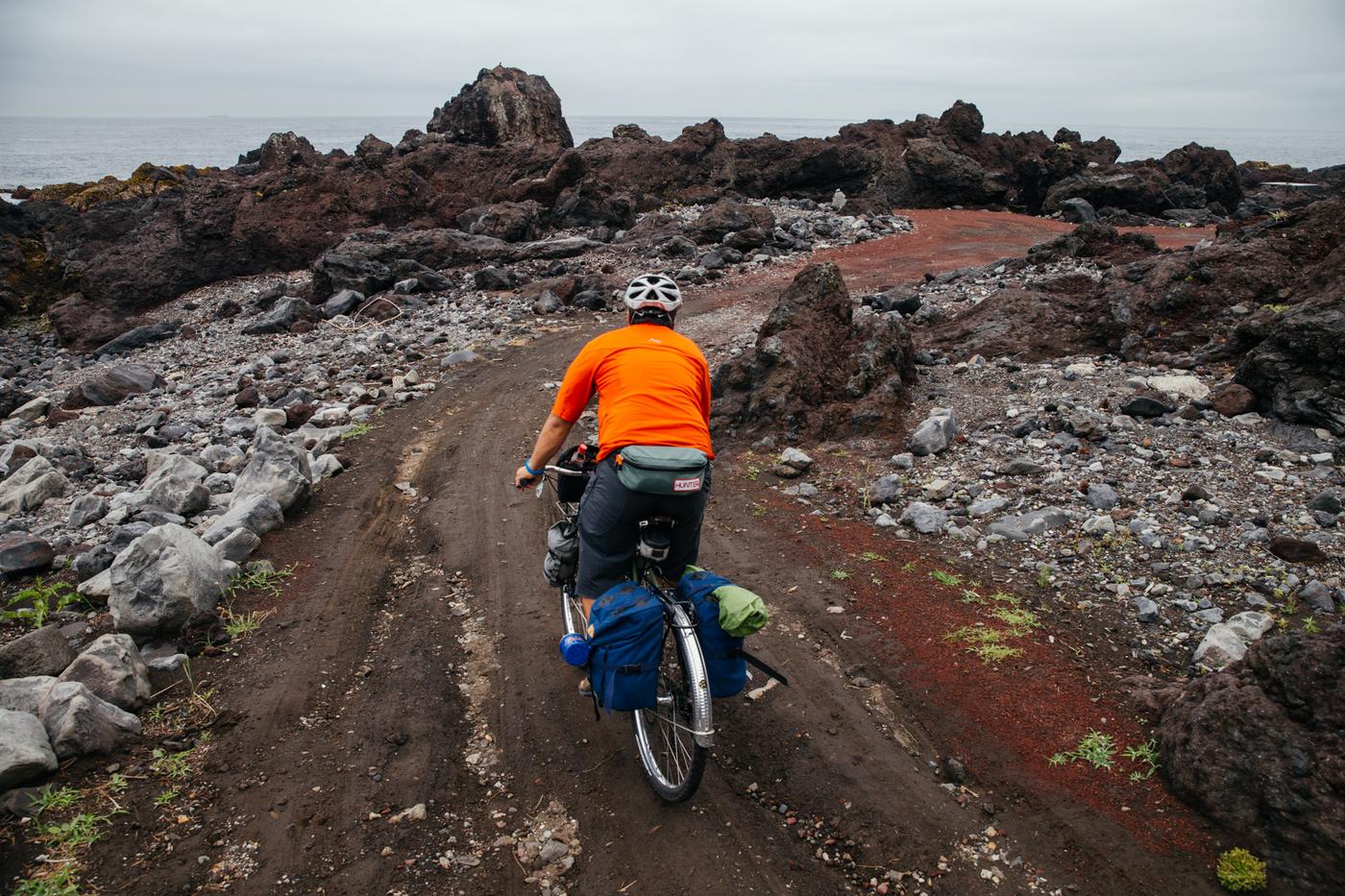 Running a cycling website and living above a bike shop means my life is pretty much bikes 24/7. While that sounds awesome to many, it can get overwhelming as every aspect of your life is inundated with bikes. What I’m saying is, I welcome trips sans bicycles and after two weeks in Japan, I was ready to stop being a cyclist and start being a Kankōkyaku, or tourist. Cari had never been to Japan, so she’d yet to see its beautiful temples or ancient architecture. Kyoto was an obvious destination. She arrived in Nagoya late the night before leaving on a Shinkansen, or bullet train, the next morning for Kyoto and its playful mix of ancient architecture and very modern tourism. Two days in Kyoto and I was already embracing this trip. Not having to tote around a big DSLR, or chase down cyclists was a welcomed change. I took my Leica and three lenses, rarely removing the 21mm, to soak in all the built or unbuilt environment. After many temples, plenty of udon and so many selfie sticks, we were on to stop two of our trip. Kobe is not your typical tourist destination, but it is the home of my good friend Akira. Usually when someone in Japan says “come see me in my home town!” they really mean it. Not like in the USA, where you’ll get friends sending half-felt invites, only to find out it’s an inconvenience for them, their job or their family. In Japan, when someone invites you to their home, they welcome inconvenience.

All I knew of Kobe was beef and truthfully, that’s mostly the attraction for Americans. We like to go to the source for a lot of things, right? Texas for BBQ, Philly for steak sandwiches, NYC for bagels, California for tacos. Ok, ax that. We look for food as an additive we sprinkle on a jam-packed travel experience. In Kobe, the beef became the tie that bound myself, and my friends there. Both old and new. Akira took us around town in his super pimp 70 series Land Cruiser. We ate beef, had a livingroom BBQ and discussed our main agenda item: getting to Naoshima, an art island off the coast that had very little online information for westerners. We figured out a route involving a local subway, a bus and a ferry to the island, only to arrive on the eve of their seasonal re-opening. That meant nothing was open when we arrived. Hotels and hostels were “closed for renovation” with an opening date of the next morning, yet we couldn’t find a single place to eat or stay. To make matters worse, it was pouring rain. Then, we lucked out. A sign for a small house’s hostel was open, with two vacancies. The following morning, the sun was out and we had but a short walk to the first of several museums on the island. Mostly designed by Tadao Ando, the founder of Japanese brutalism, these pristine concrete forms became the vessel for artists from all over the world to display their work. Between each museum were these playful art installations, begging to be interacted with or within. With only an afternoon to spare, before catching the ferry ride back to the mainland, we made haste. I should also note that photos weren’t allowed in a lot of the places we went, so I had to make due. While it took us around 9 hours to get to Naoshima, our trip home was much shorter. A ferry to train to shinkansen meant we’d be in Tokyo in a mere 5 hours. Our hotel was the biggest expense of the trip, but staying in Shibuya is something any American tourist should experience in Tokyo. Suddenly a dense, congested city feels like a small ant farm and the colors emitted by the lights begin to feel like a painting. Then you leave the elevator and are suddenly shrunken in scale, becoming part of the show. 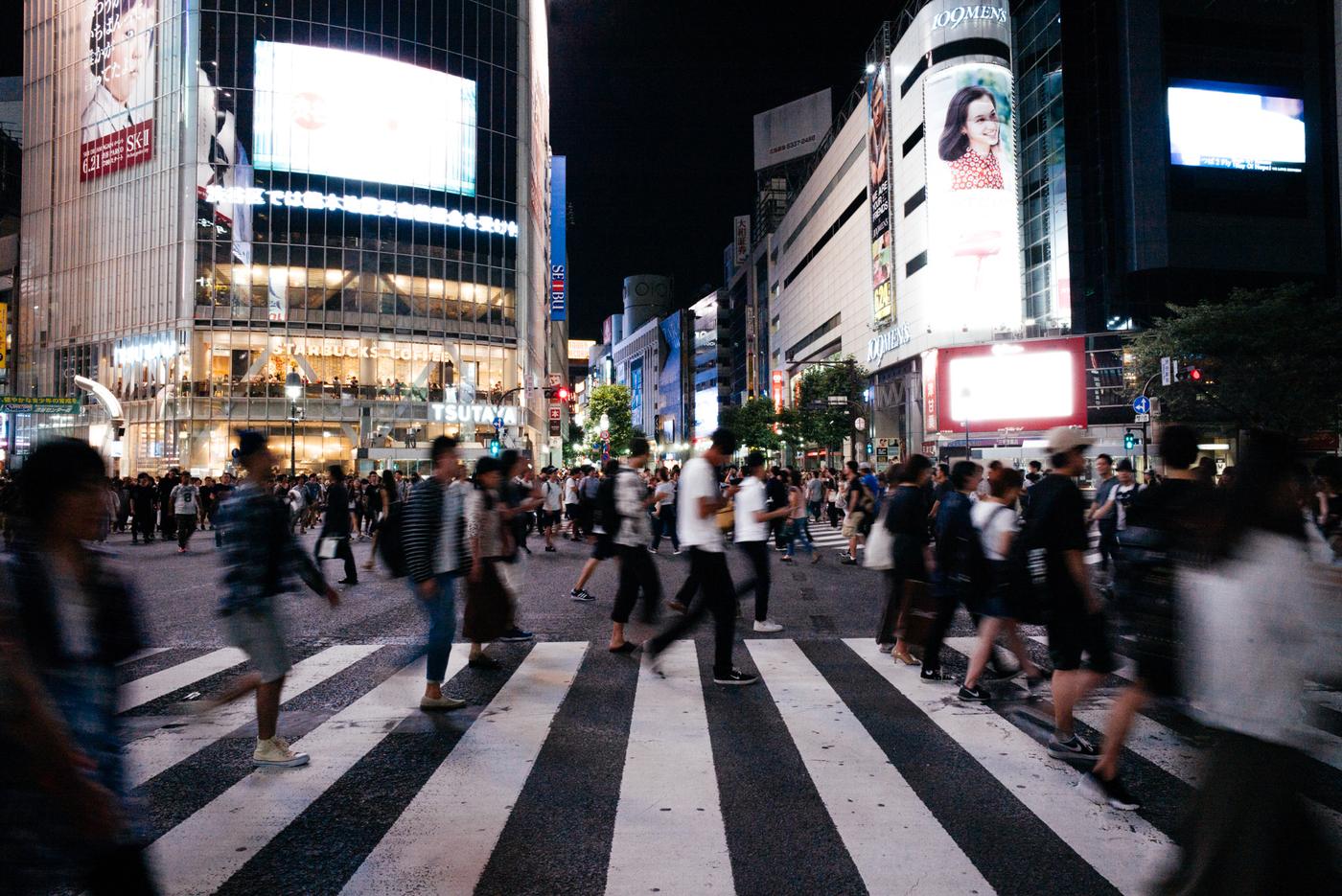 The immersion effect doesn’t stop there. It’s lights, camera, action 24/7 in Tokyo and while our itinerary was dense, we were quite content exploring Shibuya and its surrounding neighborhoods people watching until the early hours of the morning. On our last day, a feeling of vene vidi vici had overcome us and a cellphone photo of our dog, Max had made us home sick. Japan had really shown us a good time but our transition to Kankōkyaku was over… Even this year, when we were planning a trip for Cari’s birthday, we both really wanted to return to Japan, but opted for something entirely different.