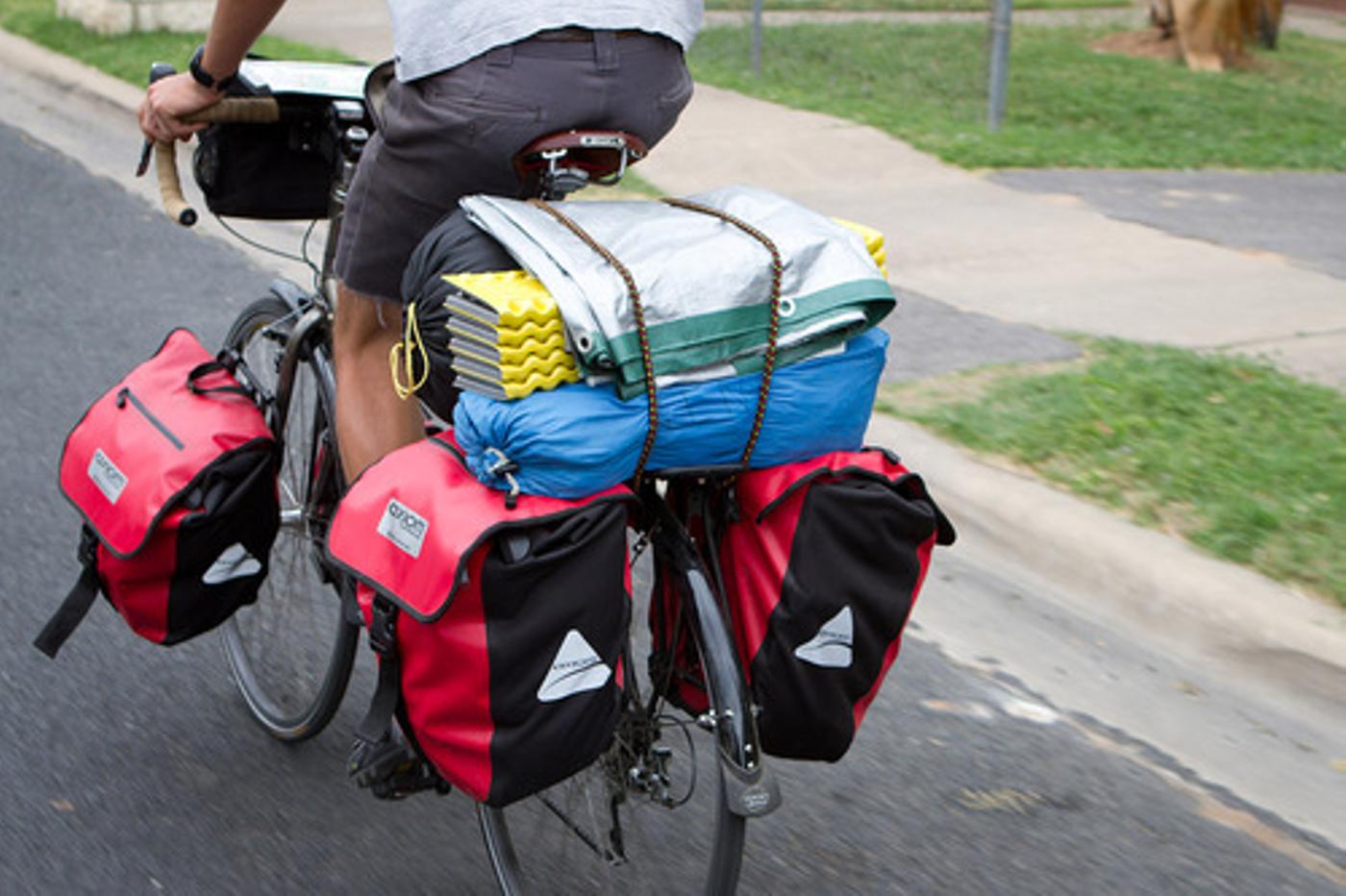 I’m an advocate for re-appropriating bicycles to do things they weren’t designed to do. Hell, we all started doing BMX-inspired tricks on fixed gears. So when someone says they wanna tour on a cross-bike, rather than say that it’s not engineered for that, I tip my hat to them. Cole hit me back up in January, saying he was going to be touring from Baton Rouge to San Diego and heading through Austin at some point. What kind of bike was he going to ride on? A touring bike? Nope. An old Giant cross bike. Was it designed for touring? Nope. Did that stop Cole? Nope. You see what I’m getting at?

Well, he left for his tour in early March and made it from Baton Rouge to Austin in about a week. Friday night he rolled into town and we spent the weekend hanging out during SxSW. Sunday morning came and he had to be set off on his route so I rolled with him for a few miles until we found a spot to shoot photos of his bike. When I say fully-loaded. I mean fully-loaded. Cole attached a rear rack to his cross bike and loaded his kitchen and his bedroom on the back. A stove, tent, tarp, pad, sleeping bag and clothing rests on the back of his bike with no heel strike and very little sway. Pretty smart for Giant to put rack mounts on their cross bikes, twenty years ago. I guess it’s before people began to over-analyze what a bike is supposed to do. Cantis with ample clearance and a fender mounted to the drilled fork (which was only drilled on the front by the way). The front of the bike holds his bathroom, navigation and tools. Shimano Tiagra 10-speed with a triple and brifters. His rear cassette is an 11-26, hence the triple. A threaded to threadless converter, handlebar bag support, threadless stem and computer rest on the cockpit. Cole rubbed “May the Wind Be At Your Back” across the top tube. It’s the necessary mojo you’ll need on the road. And the front end. And Cole about to set off on his journey. Did he care that his cross bike wasn’t designed for touring? Nope. He built it all up for around $1,200 and is having the time of his life. If you see Cole along the way, give him some aloe, zinc oxide and sunblock. Duder needs it!

Cole, may the wind be at your back homie! Keep me posted on your trip if you’re seeing this and god speed!

There are some extras on my Flickr. So check them out!