Ante Up! Ride That Trail! Ante Up! Put Time Into That Trail!
Words and photos by Kyle Kelley

A little while back, Kyle took Adeline down to Santa Cruz, California to ride some trails and hang out with Amanda, who works for the Mountain Bikers of Santa Cruz. Currently, the team there is promoting their Ante Up trail campaign, so I suggest you check it out!

After finishing up with all the Grinduro antics this year, Adeline from Mercredi Bikes and I decided to head down to Santa Cruz to see friends and ride mountain bikes for a few days. Amanda Schaper and Scott Chapin said we were more than welcome to stay with them, but they wouldn’t be able to ride with us because they would both be working. Adeline and I were pretty disappointed, but Scott th2:30 PMd us that Santa Cruz Bicycles does a factory tour every day at 2:30PM, and we were more than welcome to come by for a visit. Then it clicked, I remembered seeing that Santa Cruz was doing a raffle with Mountain Bikers of Santa Cruz (MBOSC), a trail advocacy group in Santa Cruz! And guess what’s special about MBOSC…that’s where Amanda works! Well…that’s not the only thing that is special about them, but that’s what got me thinking there should a be a story on The Radavist about this bike brand that supports trail advocacy and the people behind building and maintaining the mountain bike trails of Santa Cruz! Scott wasn’t able to get out of work in the morning for a ride, but Amanda called in and said she’d be coming in a little late because she was going to take Adeline and I on a stroll around Santa Cruz showcasing the MBOSC built Emma McCrary and U-Conn trails in Pogonip Park, which connect Santa Cruz to upper UCSC and Wilder Ranch. I personally was amazed at how easy it was to access these trails from anyone’s front door in town! And we’re talking world-class mountain bike trails, trails built with purpose in mind. Trails that flow as much while climbing as they do while descending—that’s when you know they’re good! It quickly became obvious that MBOSC knows a thing or two about building great trails. After riding around for a few hours, Amanda realized she was going to be late to work, so we took a photo at the world-famous UC Santa Cruz Water Tanks and headed back into town. 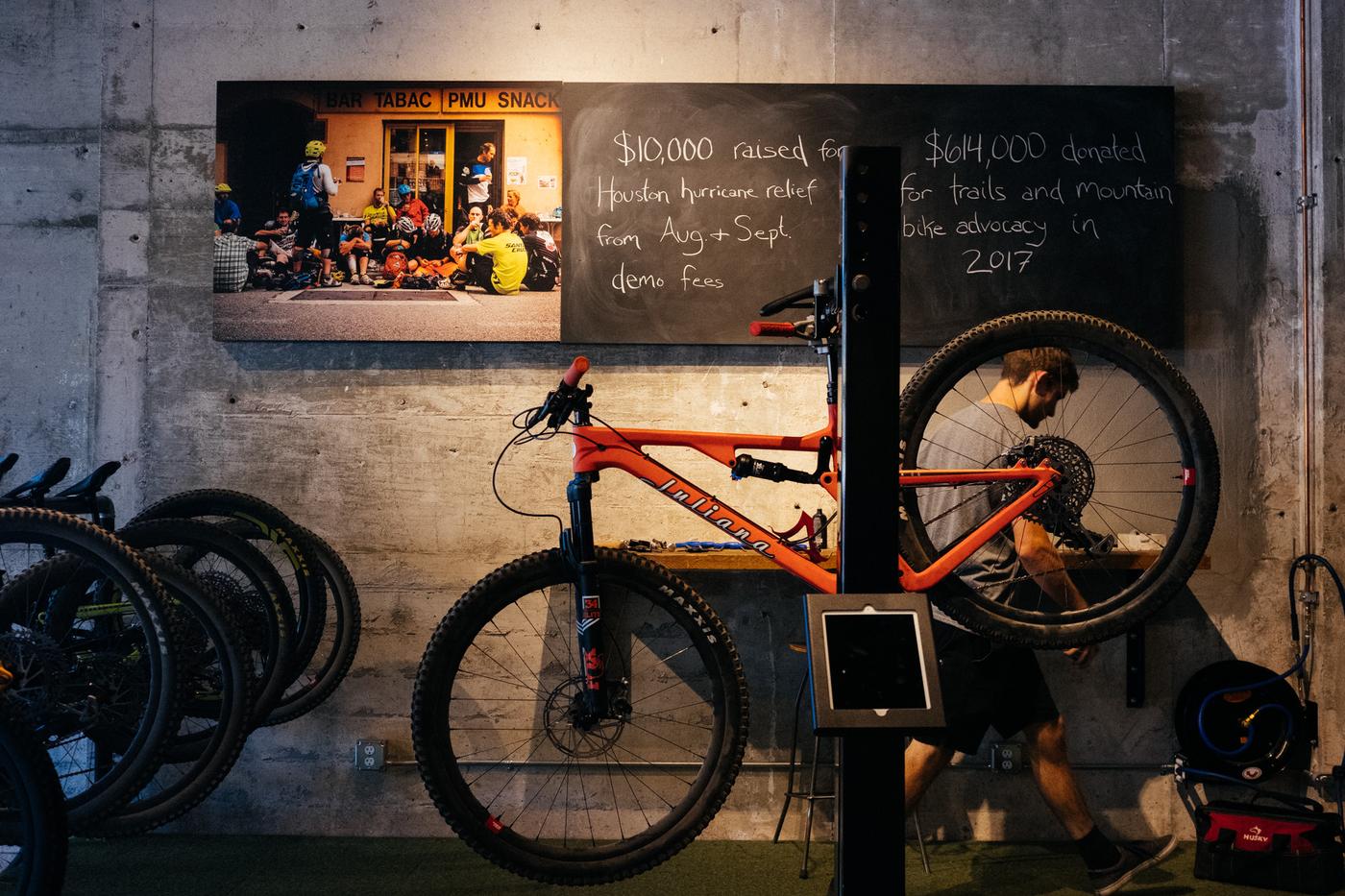 Adeline and I were pretty hungry now, so we grabbed fried zucchini burritos from La Cabana and cruised over to Santa Cruz Bicycles for our tour! As soon as we walked in, one of the first things I saw was a handwritten note on a chalkboard stating how much they’d raised for trail advocacy in 2017, and it was no small number. Santa Cruz gives 100% of the money from their bike rentals/demo back to trail advocacy or some other charity. While we were there they were raising money for Texas Hurricane Relief. AMAZING! After a shot of espresso from our tour guide, we started our tour. It was really comforting to see how many non-cyclists Santa Cruz has on the assembly line. This company employs a lot of humans—not just ripping mountain bikers and bike nerds—and that made me feel really good. As we were moving along the tour, I ran into Syd Newsom, who I’d shared the single speed podium with at Grinduro with just a day before. We chatted for a sec, then Scott rolled up to say “Hi”, and the next thing we knew the tour was over, and I felt proud to be a Santa Cruz dealer. After saying bye to all of our friends new and old at Santa Cruz Bicycles, we headed over to Mountain Bikers of Santa Cruz’s headquarters to see Amanda and meet the rest of the gang! We were greeted by Emma Ussat (Volunteer and Community Outreach Coordinator), Matt De Young (Executive Director), Drew Perkins (Trails Officer on the MBOSC Board of Directors), and Amanda! Matt and Emma gave me a nice rundown on the history of MBOSC, getting me caught up to present day, and then Drew showed me a map with future plans for all kinds of trails in Santa Cruz and the surrounding areas. The amount of energy coming out of these four individuals was extraordinary, no wonder they get so much done! We could have stayed there all day chatting, but the future of trails in Santa Cruz relies on these people, and they needed to get back to work! Before we left, Emma had us do a few trust exercises with them to get a group shot of the whole crew. As you’ll see in the photos, everyone is having a damn good time. Well…maybe not Adeline. She looks a little scared. 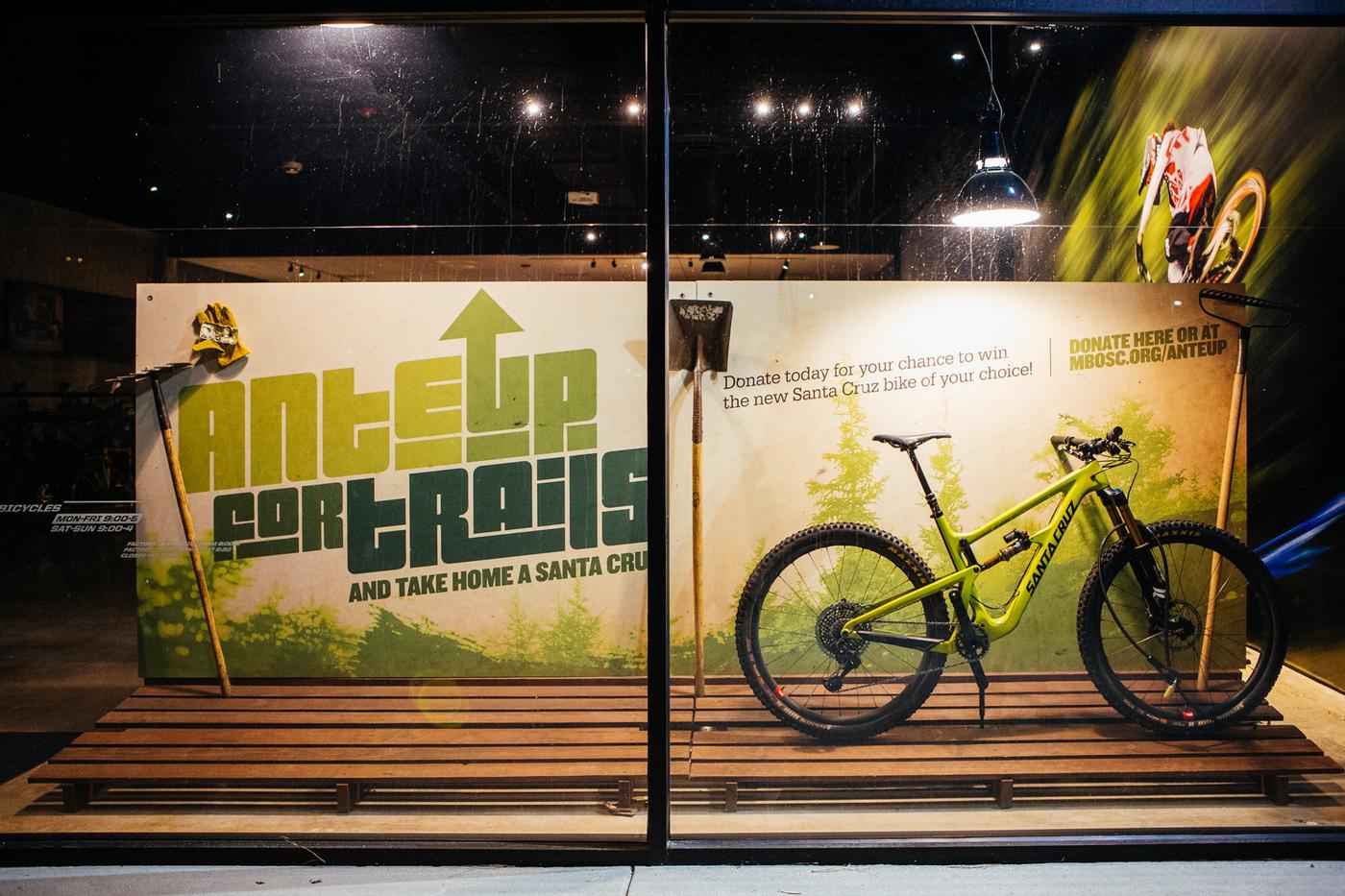 If you are in or around Santa Cruz and you’d like to get involved, head over to mbosc.org site and hit the Get Involved link. It’s also coming to the end of the Santa Cruz and MBOSC Ante Up For Trails drawing! Every $5 you Ante Up!!! you’ll be entered into a drawing to win a Santa Cruz bicycle of choice—any model, any build! This drawing is open to people worldwide, so you can (and should!!!) enter no matter where you live…so Ante Up! Ride That Trail! Ante Up! Put Time Into That Trail!

Thanks for showing us around Amanda, and I’ll be getting back up there for some more riding very soon!