I love a sunburnt hardtail.

Influences come from many a place. A flicker, chirp or whiff that conveys a feeling and experience. Singlespeed’s have influenced my riding since the turn of the millennium. I knew I’d be forever broke as a bike messenger if it involved maintaining a geared drivetrain year-round through London’s woefully wet winters.

Mountain bikes have been and will always be my first love, primarily as connect me with nature. When I convey stories of my favourite places to ride, it is always the terrain – not the trail features that draw me to it.

Two years ago, my Curve Uprock+ titanium hardtail was painted by Steve Gardner in his garage in the far east of Melbourne, high up in the hills. Steve had been in the repair and restoration since 17. Straight out of school and onto the tools – his first day on the job was rubbing down the wheel sills and door jambs on a Lamborghini Miura. After 20 years he made a deliberate and daring leap from the security of the panel repair industry, to focus on an independent business restoring bicycles – his passion. 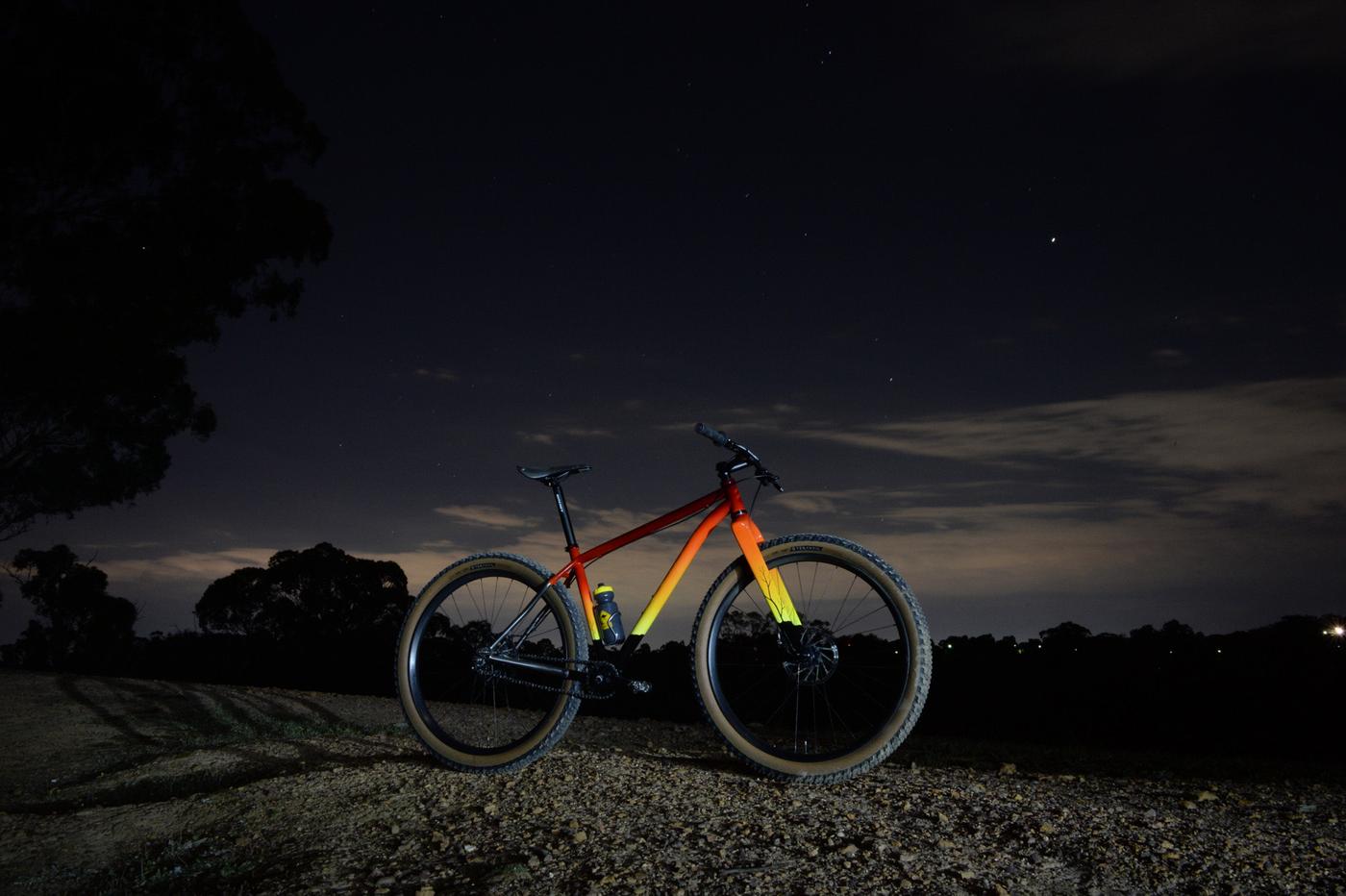 ‘Bikes by Steve’ was his moniker to begin with. Simple in nature, perhaps underwhelming of the standard of finish coming out of the garage. While the vibrant neon’s of my first paint scheme ‘by Steve’ faded in the heat of its first Australian summer, his painting business was blooming – to the point where he needed a dedicated space, planting roots at 412 with a community of intermingling cycling operations – Bastion and Prova who he paints exclusively for, and RiderFit.

Steve had recently become the endorsed resprayer of choice to Specialized Australia, and to reflect the growing operations he felt it time to rename to a more meaningful title, as Steve was not alone in the preparation, design, application and extensive post paint pedantic polishing. After a lengthy yarn about name changes, logotypes and fading paint – Steve suggested it was time to rebirth the frame under the new ​Velocraft​ banner. I gave him carte blanche on design and I’d been looking for an excuse to circle back to having the bike as a dedicated rigid singlespeed – because they are ace! The bold carbon 29+ fork also gave Steve a larger canvas for his artistic statement. 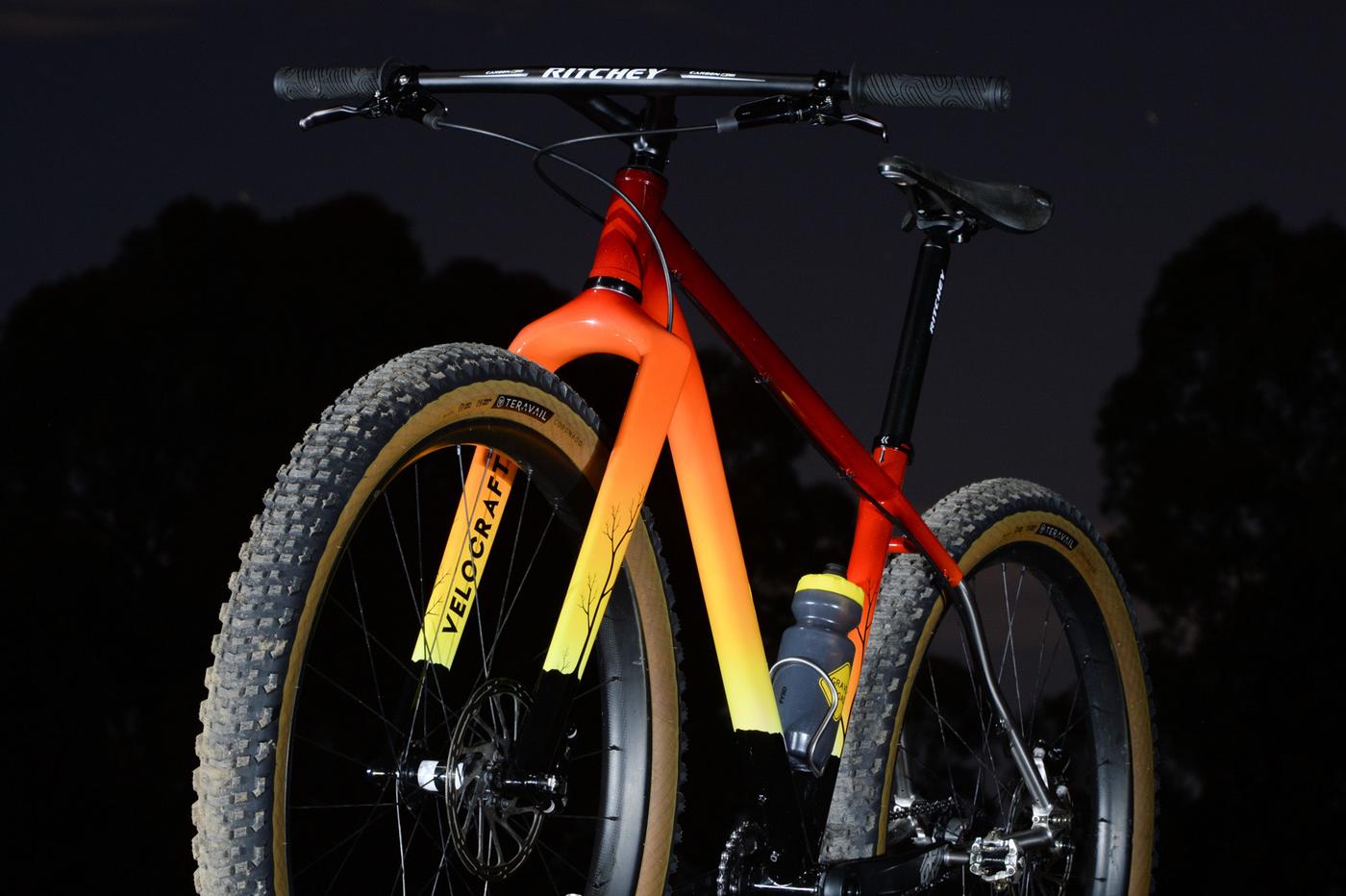 Initially inspired by a painting in his local pub as he glanced up at it over his IPA and parma, it was tweaked with some inspiration from local bold adventurer Sarah Hammond. I suggested incorporating black into the rigid fork lowers to blend in the brake calipers and accidentally giving it the appearance on an RS-1 from afar – but it wasn’t until we stumbled upon a shared loved of TOOL that it truly took shape. Of the many lyrical excerpts we could have agreed upon, it was a YouTube comment that won the day. Rather than use a font, I felt that handwriting seemed more appropriate, akin to the lines from Dorothea Mackellars famed ‘My Country’.

Being slightly more Adobe Illustrator savvy, I told Steve I could scrawl the ‘poem’ on paper, take a photo, vectorize and email it – for the Velocraft team to plot and weed so it could adorn the top tube. Dotted amongst the poem, specks of the celestial sky amongst a shimmer of candy purple. Like a great TOOL composition, it’s complex, layered and grows on you which each passing listen and look. The transitional fades within fades, super fine masks, and a glassy smooth finish speak volumes for the care for the final product coming out of the booth. 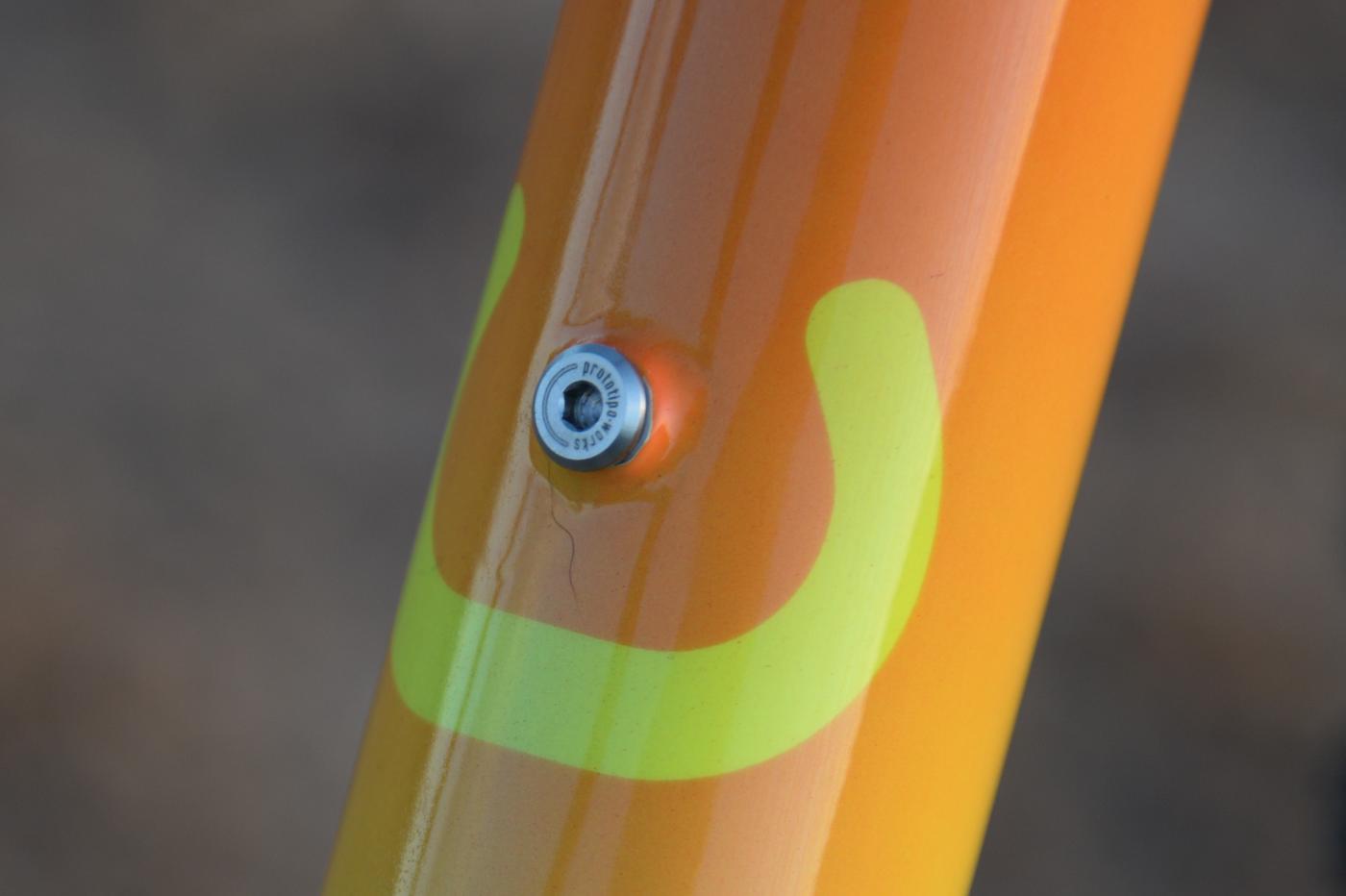 While the frame was in paint, I sourced a few indulgent items – Ritchey’s Carbon Bullmoose bar, an Absolute Black cog, a Silca Sicurio titanium bidon cage, which holds the bidon securely, is L I G H T and doesn’t appear to mark the bidon. The secondary bidon cage boss voids are filled with bolts from Prototipo Works – a local project by designer Lindsay Thebus. The new rubber from Teravail was chosen for no other reason than it was the only swish looking 29+ tyre that appealed to my love of gumwalls.

For the weight weenies, the bike is bang on 10.6kg (23lbs). Considering the Brooks Cambium C17 is no feather and the Teravail Coronado 29+ tyres are a 1075g a corner it’s quite the un-deliberate feat, helped by the lightweight titanium frame There’s plenty of room to go lighter, but I lean on the side of durability, reliability, and longevity. There’s probably 3g of ‘Special Grease’ in the DT350 ratchets but I prefer the quiet types when it comes to a freehub. 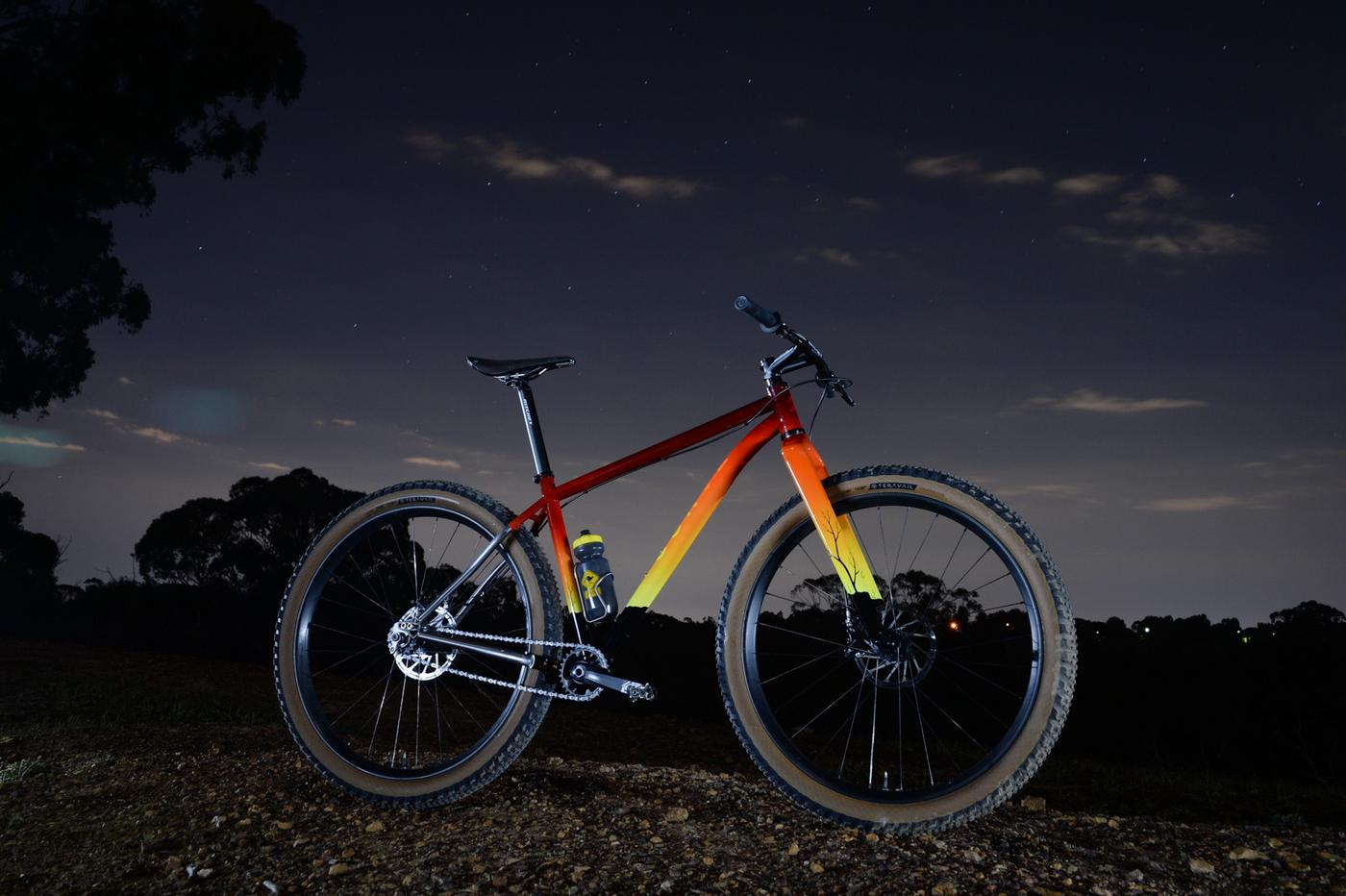 I felt this bike deserved photos befitting the final design, with the black of the frame and fork aligned with the horizon, set against a starry sky. Patiently I waited for a clear and still night. It chanced to be a full moon that night – but the celestial effect would be amplified if it had been a new moon.

Next time – for the next bike.