I don’t know what to title it. But the bike is really fun, so this is worth the read. I like to think that the writing is also fun, making it double worth the read.

The bottom line at the top: The new Juliana Joplin ups the “raucous trail ability” of its predecessor a few ticks with the new build: feeling right at home pointing down chunky and steep serpentine terrain, while somehow maintaining that xc pedal-ability we sometimes care about. While the positioning of the historic Juliana Joplin, which launched with the brand in 2013, pointed towards super-capable cross country, this bike and its lineage have always pushed the boundaries of the technical ability of a bike that can still pedal fast. 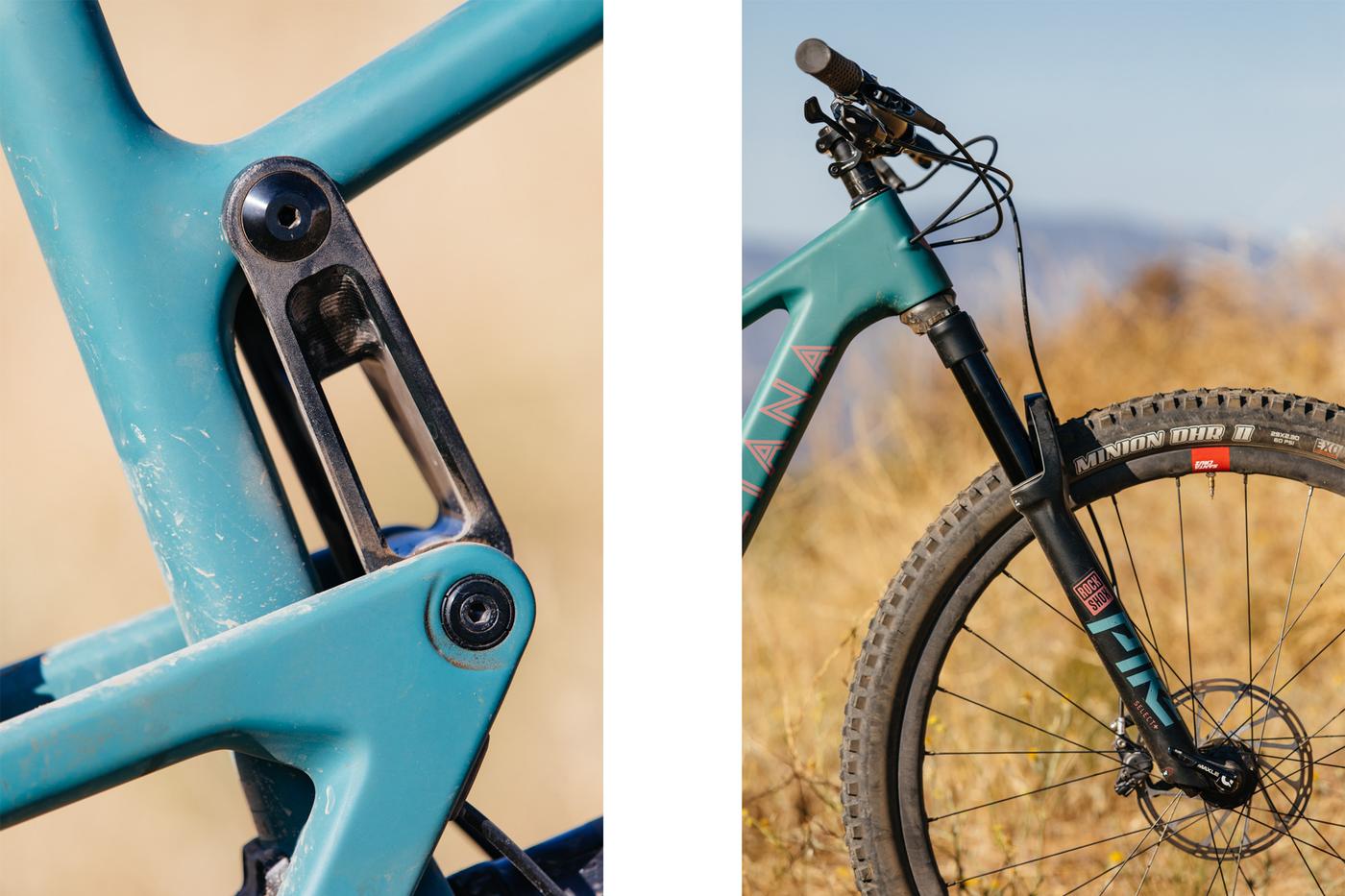 I got the bike and gave it a look. At first glance, the slack head tube of 65.5º and a lower VPP mounted suspension (while the previous generation had a top-mounted VPP – more on this later) stood out on this now longer travel 120/130mm big-wheeled bike as elements added as agency for descents, not climbs, while the steep seat tube angle of 76.5º suggested climbing ability in balance. This bike pushes the trend of longer, slacker, bigger [wheels] striving to keep up with a large range of terrain. While this is not the first big-wheeled shorter travel bike claiming trail, its whole build suggests that this bike is eager to be called upon as the staple go-to toy. Yet still slightly confused, I’ll admit, and not knowing the place to inaugurate this bike, anticipation to get this thing rolling hit hard, so I rode it, soon and a lot. Here’s how it went! 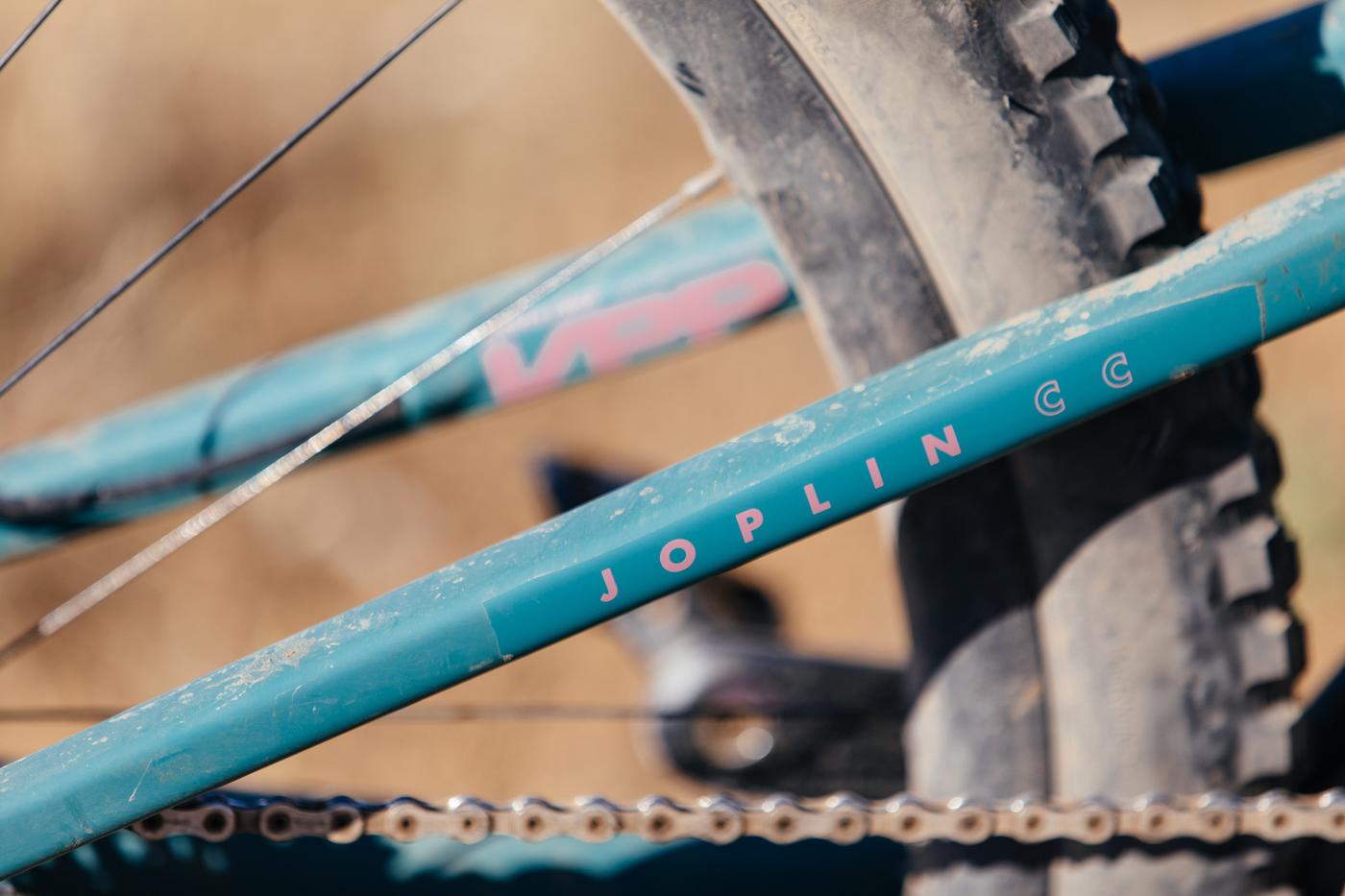 And, okay fine, I’ll take a step back here to mention, that really, at first sight, the bike’s beauty emanated through the classic simplicity that blends bold and muted natural tones of a Juliana bike with the graphics that make you wanna ride a bike then hang it on the wall under stage lights when you get back home. There are photos here, so have a gander. 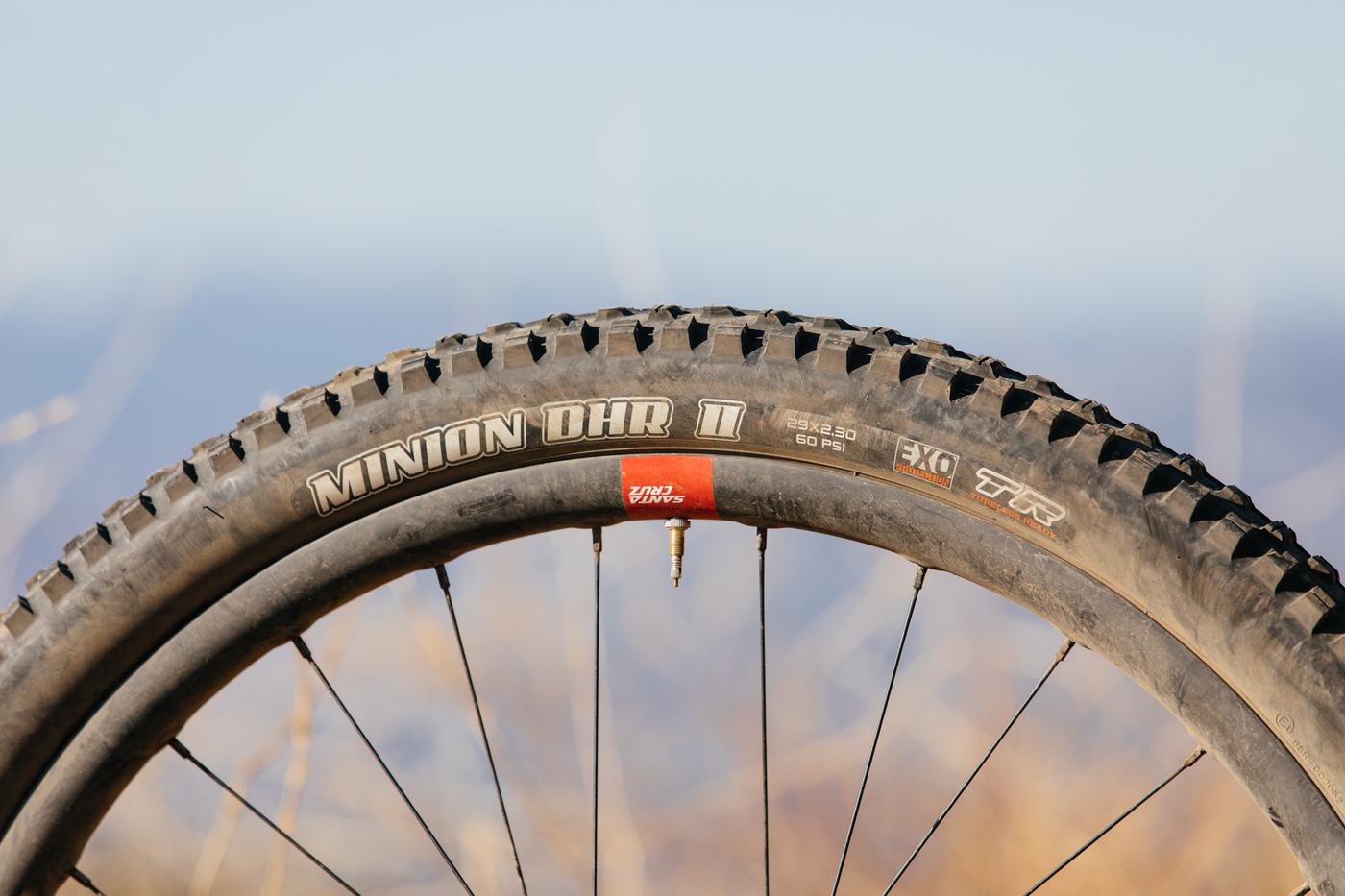 This bike is built with Juliana’s top tier carbon, the CC which is built in their own Skybox Factory, compared to their other frame materials: Carbon C, slightly heavier but more affordable carbon, and aluminum. The frame is offered in size XS through M—I am 5’9.5” and am on the M, which would be my choice size even had they offered an L. The geos are shown below. They offer five different levels of the Joplin, with bikes of two different carbon types and aluminum plus different final builds. The specific bike under scrutiny is the top of the Juliana Joplin line coming in just shy of 28lbs and sporting RockShock Select + 130mm fork, Fox Float Performance Elite DPS 120mm shock, SRAM Eagle X01 drivetrain with the Santa Cruz carbon reserve wheels as the cherry on top. The $6,999 tag actually doesn’t sound that bad when you consider the bike that comes with it, even if it does sound bad when you’re looking at your bank account. But hell, maybe that’s why credit cards exist, so we can ride sweet bikes. Yet, looking at the analogous Santa Cruz new Tallboy, we see higher specced bikes that unfortunately aren’t available in the Juliana line, reminding me of the unfortunately extant Catch-22 in the bike world. The first ride, although just on simple cross country type loops for that “controlled test” to get the suspension dialed, slaked any nerves rattled by weary thoughts of taking a bike I thought (but proved to not be limited to) may be bent towards cross country to the rocky and raw front country of Santa Barbara: long climbs leading up to singletrack characterized by dust, rampant rock gardens and often lacking any sort of continuous flow. On the smooth trails, the bike commanded flow and was able to corner both dusty off-camber and banked turns. This may sound crazy, but something inherent to the build of this bike felt like it encouraged better riding technique without reprimanding bad habits; it felt super balanced. While the front end maintained traction, the rear followed smoothly yet with slightly more tendency to slide around turns than I am used to, despite the Maxxis Minion DHF specced both front and rear, and I’m not saying that’s a good or bad thing, just something I noticed. Once the flow capability was checked off, the bike went towards rocks and trails I’d never consider taking any old shortish travel bike on, and it proved to me that Juliana nailed the tagline for this bike whose name calls us all to remember the queen who wailed in her own groundbreaking style, a riff on another’s lyric, which is “a little bit (cross) country, a little bit rock, and roll.” Approaching rocky sections on steeper grades, it felt just as natural, if not more so to charge over rock gardens lined with sharp chapparal next to thousand-foot drops than when on the bigger bikes I’ve ridden on the same trails. Despite the longer setting for the chainstay (at 440mm, with the option to switch between that and 430) the rear end felt responsive—playful when commanded as such over rocks and around corners while maintaining the solid, planted feeling depending on rider input. I imagine shifting the chainstay to the 430mm setting (rad feature!) would indeed tuck that back wheel a little closer under the butt, and add sensations of agility while perhaps losing some feeling of planted-ness, yet I didn’t ride it with this configuration, so that claim remains conjecture. 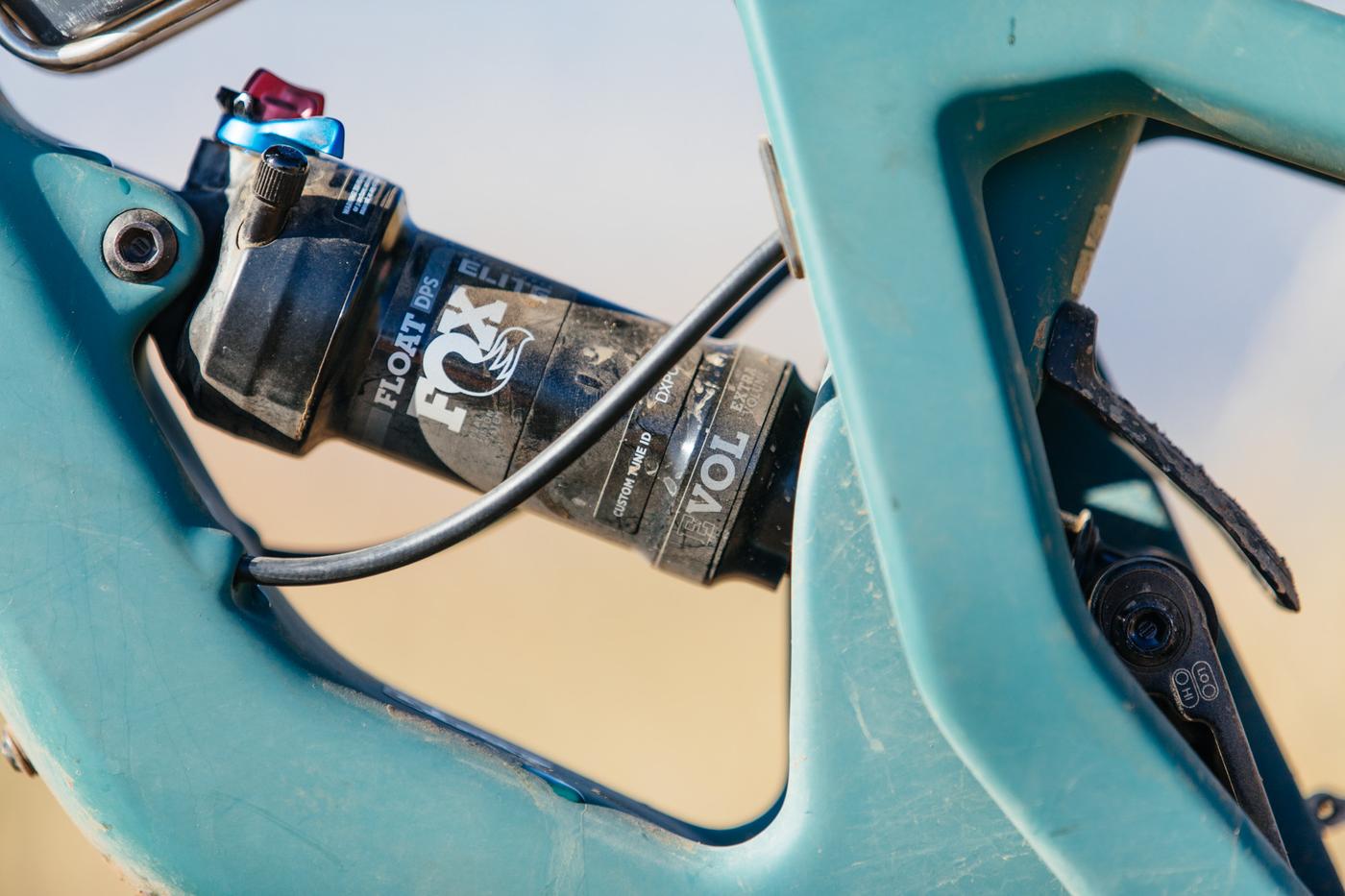 The shock, mounted by their lower-link VPP, felt smooth through the entire stroke – it felt so good that I didn’t think much about it – just noticed the smooth ride, something I find a testament to the suspension tuning and technology. The new Joplin has the low mounted VPP, compared to the higher mounted VPP shocks from previous generations. Juliana uses both link technologies on their current line up, and to this brand manager, Katie Zaffke said that Juliana looks at each bike’s whole build and the target capability written therein, and selects that shock mounting technology to give the best leverage ratio for the specific bike. And, riding this bike felt like they nailed that too. A corresponding perk to this new frame is the space for a water bottle cage in all sized frames in the line-up. They also added bolts for a second water bottle on the bottom of the downtube, which would not be my go-to placement for technical rides, but a great option if I were to take this bike on an extended trip that required more water then usual. 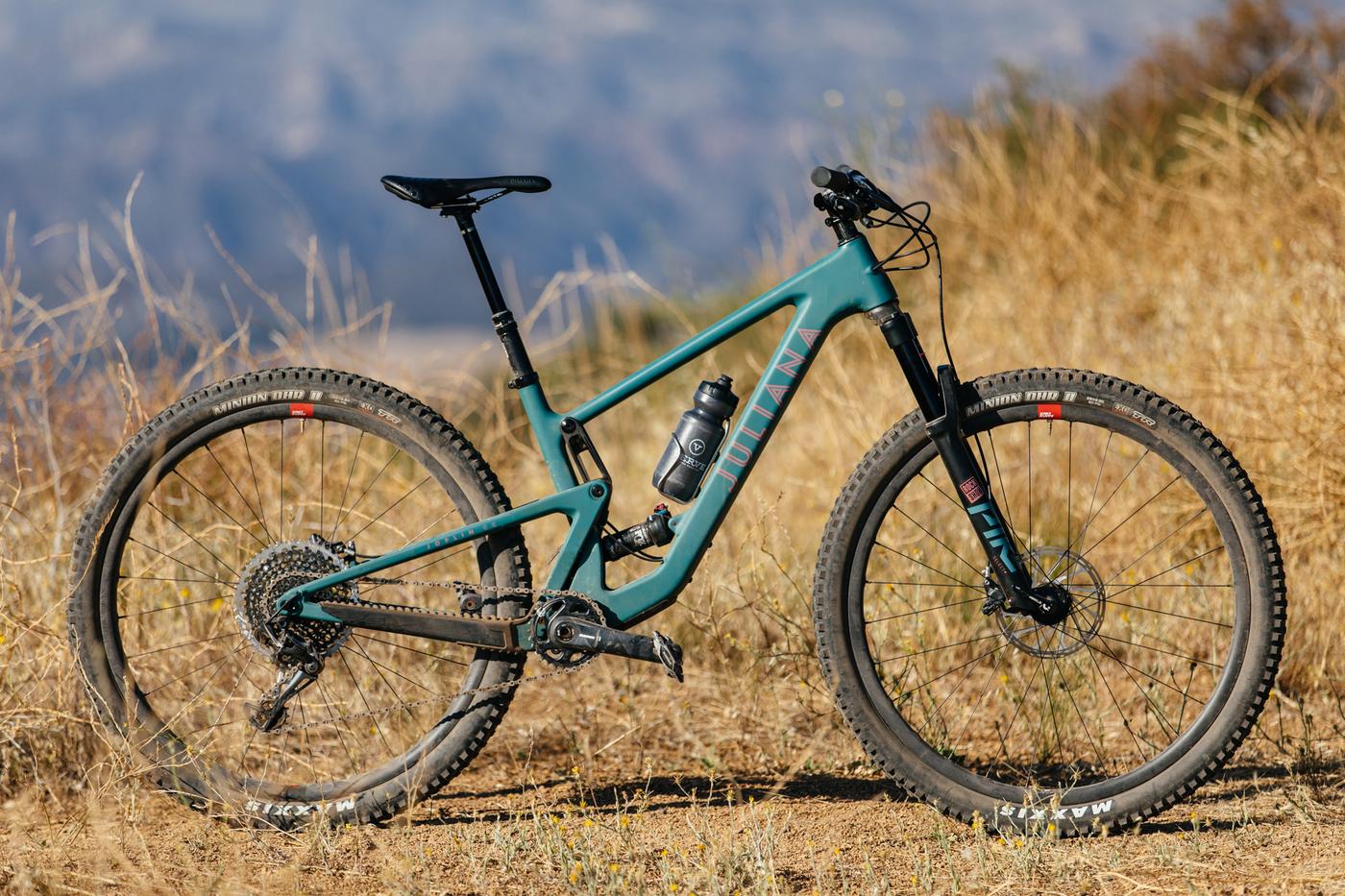 While it took some time to get used to the slack front end, which set at 65.5º (with an option to set to 65.7º), once the fork was dialed—the rebound set much faster than my usual choice, perhaps this is the lighter build on the internals—and I got used to using more core to turn around switchbacks, the bike played over blips and glided around turns naturally. The slack headtube matches the angle of the recently introduced Juliana Maverick, their bigger 140/150 29er trail bike, but I haven’t ridden the Maverick, so comparisons will remain at the numbers and stop here. I’m going to wheel further down this tangent line and mention that the Furtado is Juliana’s other everything-trail bike, which maintains similar ability as the Joplin but caters towards those wanting a 27.5″ wheel instead of a 29er. Also a super fun ride. And, as for the cross country part, pedaling the bike felt solid. At some points, the wide wheelbase, or corollary slack head tube, at first gave a sensation of driving a boat, but the speed and ease of climbing, even up technical escarpments, proved those sensations to be a mere fabrication of my psyche as a result of getting used to a slacker front end. I mention this first impression because it shifted once I got used to the bike, and will just let people know who may go test ride one: if this is something that dissuades you after the first ride, trust that the feeling will go away and the bike is responsive and quick on climbs. So yes, the bike climbed well and despite said slack headtube, the front wheel was easy to keep planted even when the climbs got steep. Going from smooth fire road to technical, chunky climb sections further proved that this bike is not just cross country and rock and roll, but it blends the climbing finesse and technical ability smoothly. I noticed myself able to pedal over rocks that in the past had been certain hike-a-bike sections. It was only when the switchbacks became steep and tight that navigating the bike up became a little more challenging. The type of renegade spirit that pushes boundaries across all treads of life permeates from the people behind Juliana and the rock star namesake, who refuse to conform to the “normal” if normal limits the capability of an art, and into this bike which is just that: a work of art presenting an aesthetic that matches the ride quality without being confined to a rule or single positioning, and is fun as hell whether charging for hours or sending it down to beat dusk.

See more information on the new and improved Joplin at Juliana Bicycles.