The editor and co-author on the project is Bend author Laura Winberry, a former professional cyclocross racer with Vanilla Speedvagen. She has been published in numerous magazines and websites including a book of poetry titled, “Bell Lap”. The origins of the book came about not long after the U.S. National Championships in a different time literally and figuratively. In early January I began to have regular meetings with Ira Ryan at the Breadwinner Cycles Cafe and we started to hash out the idea. I covered him and his cyclocross team pretty closely last year and we loosely talked about a book project during the season. Ira is quite a connoisseur of cycling-related photography books and he really got me started in a direction by providing me access to his collection. I then took on the daunting task of sorting the entire season’s worth of images – tens of thousands of stills – and made hundreds of selections based simply on those that I liked regardless of who was in them or where they were taken. I created contact sheets of the selections, printed them out, cut them up into separate thumbnails, and spread them out all over tables and floors looking for patterns, repetition, color, compositional combinations, etc. I then organized and reorganized them in groups by themes and then by the parts of a race day as the direction to do that became clear. The tangible manipulation of the thumbnails was a very important part of the process as opposed to cycling through JPEGs on a screen. It was a painstaking but very rewarding process. I learned much about my own photography: habits, tendencies, who I tend to capture in frame, and what my images convey as a whole body of work. To avoid redundancy, It was quite difficult to not include many images that I was really proud of but in the end, it made the book more aesthetically diverse. The sorting process probably took close to four months. That being said, I was rediscovering images and adding/replacing shots up until the final self-imposed deadline day of August 5th. In order to provide some context for the images in the book, the sections are underscored with essay and prose poetry. I initially took some of my Instagram posts from the season and began to flesh them out into lyrical essays. Laura then sanded down the rough parts and added her own prose at carefully selected intervals. I read Laura’s book of poetry a dozen or more times and fell in love with its presentation of bike racing and cyclocross in terms of how she divided the work. So, rather than take a linear, chronological approach, I segmented it by the 5 act structure of a race day. As a result, the visual energy of the book shifts from “act” to “act”. Other contributors to the book include words from Portland’s Molly Cameron, U.S. Elite Men’s National Champion Gage Hecht, U.S. Elite Women’s National Champion Clara Honsinger, and three-time U.S. National Champion Stephen Hyde who wrote a piece that adorns the back cover. Now, in the midst of a global pandemic and important social upheaval, political transition and in a time when we would be gathering together on the weekends, huddled under tents and going full-gas between the tape, cyclocross sleeps. With the 2020-21 domestic calendar virtually empty, every event captured in the book now canceled, ‘crossers across the country are missing their ‘cross communities and thirsting for some cyclocross. My hope is that this book takes a bit of the sting out of the loss of racing and further provides some inspiration for the future. 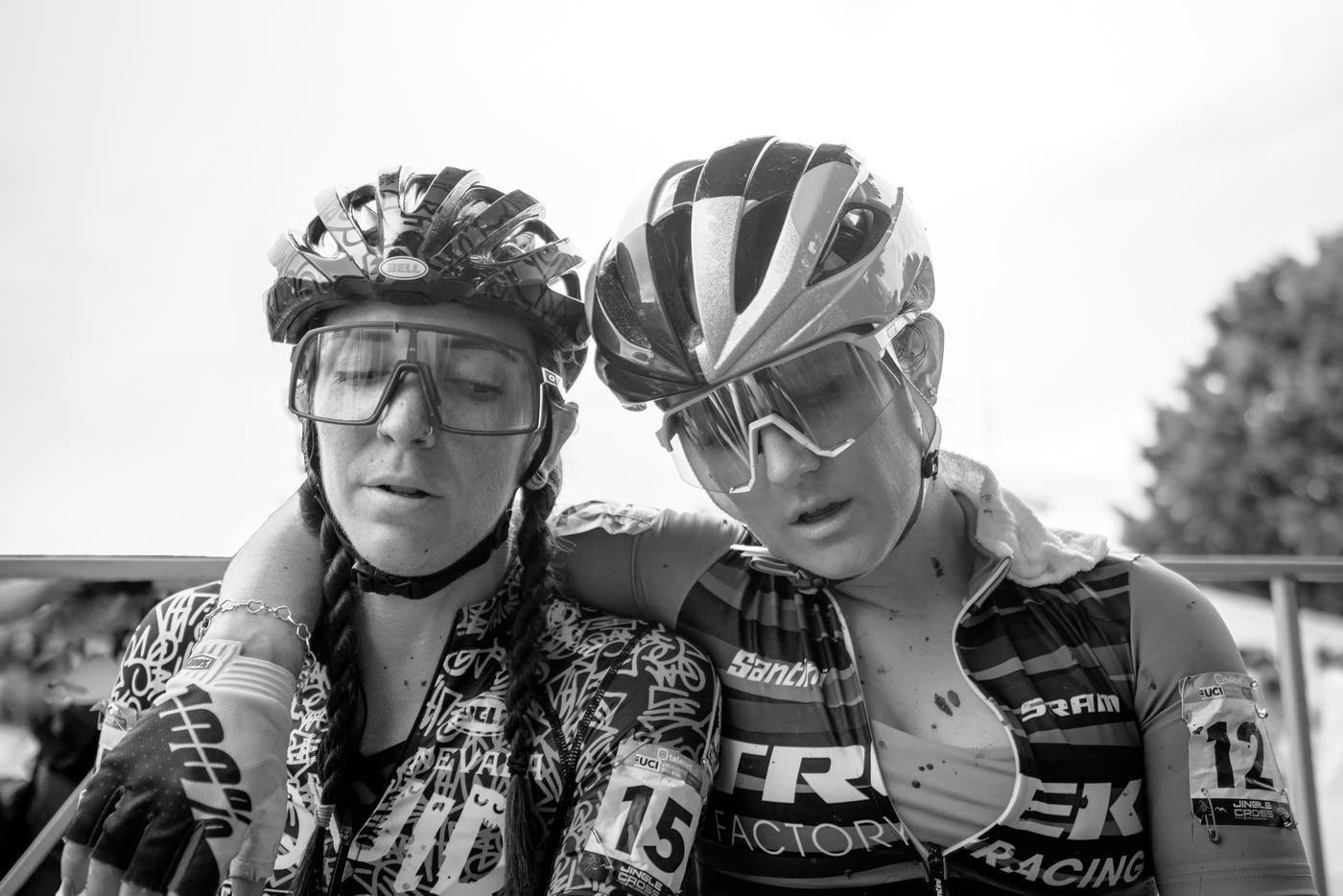 One of the essays found within the book which are used as transitions between the sections and provide context for the images that follow. This one focuses on the start line.

Nervous chatter. Call Ups. Tranquilo. Last-minute adjustments. Final sips on the bottle. Jacket comes off. One foot clipped in, the other on the ground. The camera crew withdraws and the staging tape gets pulled away. “30 seconds” is called out from the starter and the heartbeat pounds within and without. All anxious tapping and stretching and talking ceases and the rider hunches over the bar. Hands on the hoods. Eyes are focused down the opening straight as riders await the green light to flash.

No matter the category – beginner to pro – that interval of time spent between the green light to the finish line takes you and breaks you down physically and emotionally and lays you bare which is why, maybe, so many people are scared of cyclocross and why, maybe, so many people love it. If you are really driving, I mean hard, something emerges around 20 minutes into the race and it is a fight and it is not with those around you; the fight you face is with your Authentic Self – not the self put out there at work or on Instagram or with casual friends, or even, with close ones; no, I’m talking about the Self that you are affixed to; the shadow; the Gollum; the one you are with in the quiet times or in the moments as you lie in bed in the dark and stare into the void – THAT one. There is no hiding from the stream of consciousness that floods the mind. The head-space becomes a confrontation. Questions emerge, a quiet voice yells at you, and, if you go deep enough, things that are buried under layers of time get unearthed. Be it decisions you’ve made or habits you’ve developed or perhaps the loss of someone long ago … the dust gets kicked up and you have to deal with it. As communal as it can be off the bike, Cyclocross is a solitary endeavor inside the tape. It’s just you, the course, and whatever is going on inside your head.

… and, if we’re being honest, to be good at it … really good

You had better be prepared to chew on sandpaper.