Romanticising the desert is as old as literature. From Edward Abbey to Aldo Leopold and Mary Hunter Austin. Over the years, authors and artists alike, have taken to these vast, arid landscapes for inspiration. I, myself, identify with these places and feel most at ease while traversing their planes and mountains. Perhaps its the ability to see for miles, in any direction, or it could be the intricacy of their flora and fauna, but the desert to me is the most wonderful place. Riding a bike in these conditions can be challenging, however. Typically, water is an issue, as is the sun and its oppressive rays, but probably the most incapacitating element is the wind, for you can take measures to block the sun and you can always carry more water.

Last year, I was supposed to travel to South Africa to partake in the Eroica, as well as a cycle tour around the Karoo Desert but I came down with the worst flu of my adult life the day I was supposed to depart. Fast forward a year and I really wanted to return, so I contacted Stan Engelbrecht, the Cape Town local race organizer to see if he wanted to do another trip. Stan also throws the Tour of Ara, a six-day, vintage steel bike-only race. He’s no rookie to races and so I struck up an email thread with him again. That’s when he told me that the Karoobaix was happening. 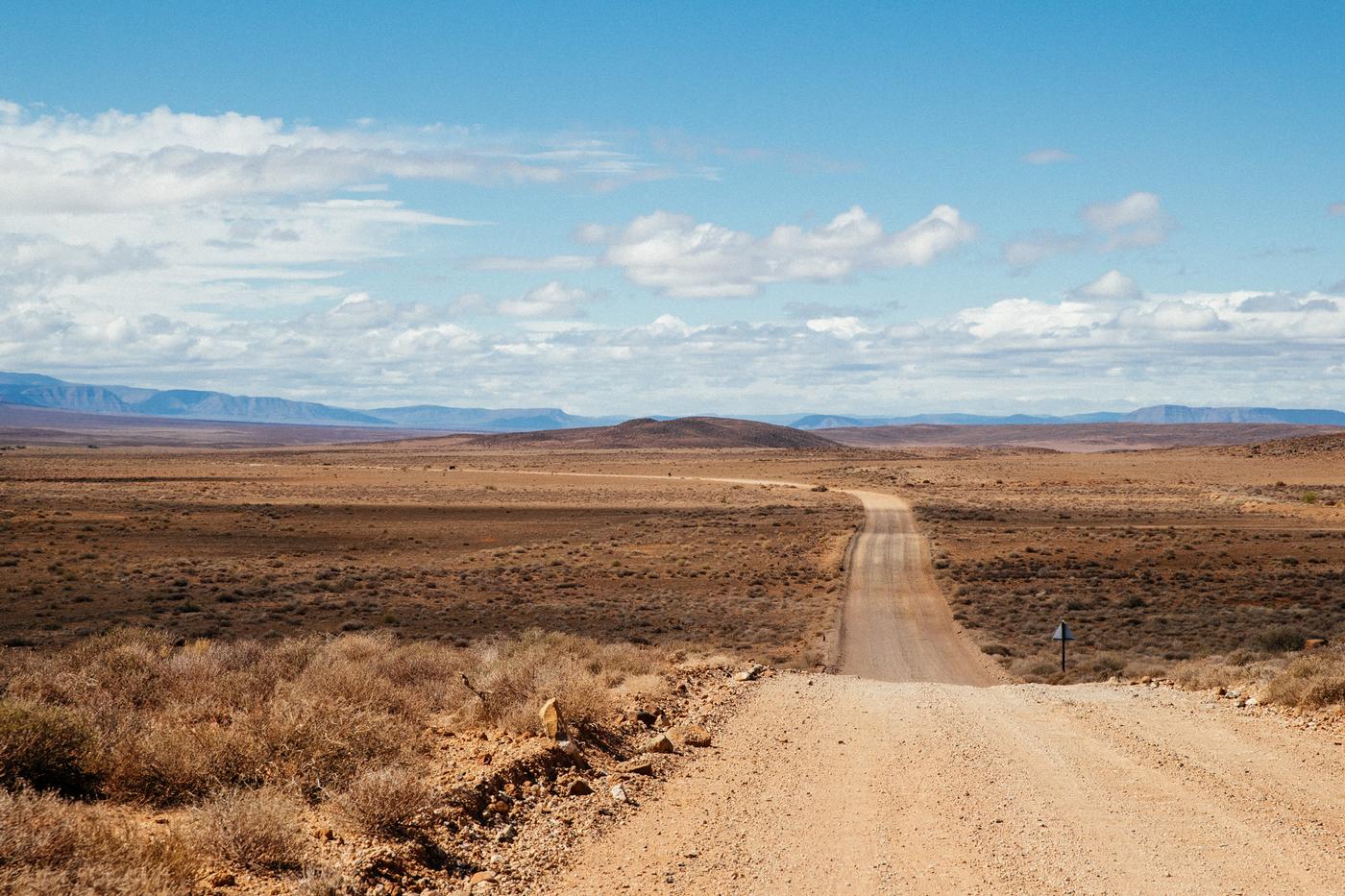 In short, this is a 400 km race through the desert, which takes place over two days. There are 50 spots available and it’s a strictly drop-bar only race, with no suspension elements allowed. You can, however, race on 27.5″ wheels with bigger tires. Initially, I wasn’t aware of the rules and banked on taking my Hunter rigid 29r, since we had planned on doing a cycle tour after the race, but I was promptly reminded of the drop-bar rules. With my mind made up and my gear already tuned in on the Hunter, I had to beg and plead with the racers, stating I’d be carrying 8kg of camera gear and it’s easiest for me to do so on my rigid MTB. No one took issue with my plea and I was granted access to the event. 40 hours of airline travel and layovers later, and I was sitting in Cape Town at Clarke’s eating much-needed greens and meeting a few of the locals who’d be racing the event. The next morning, Stan, myself, the Karoobaix staff and the rest of the Karoobaix entrants meant at Woodstock Cycleworks to load up their bikes onto a trailer and embark on our 4-hour drive to Calvinia, a small town just north of the Tankwa Karoo National Park. Upon arriving, settling in and packing my bike, I took off on a sunset ride around the city with Bregan from Brooks. We both wanted to shake down our rides and figure out what would go where. Almost immediately, some children from the town chased us down for photos and high fives. Suddenly, my mind was off the grueling route the next day and it finally sank in that I was in South Africa. 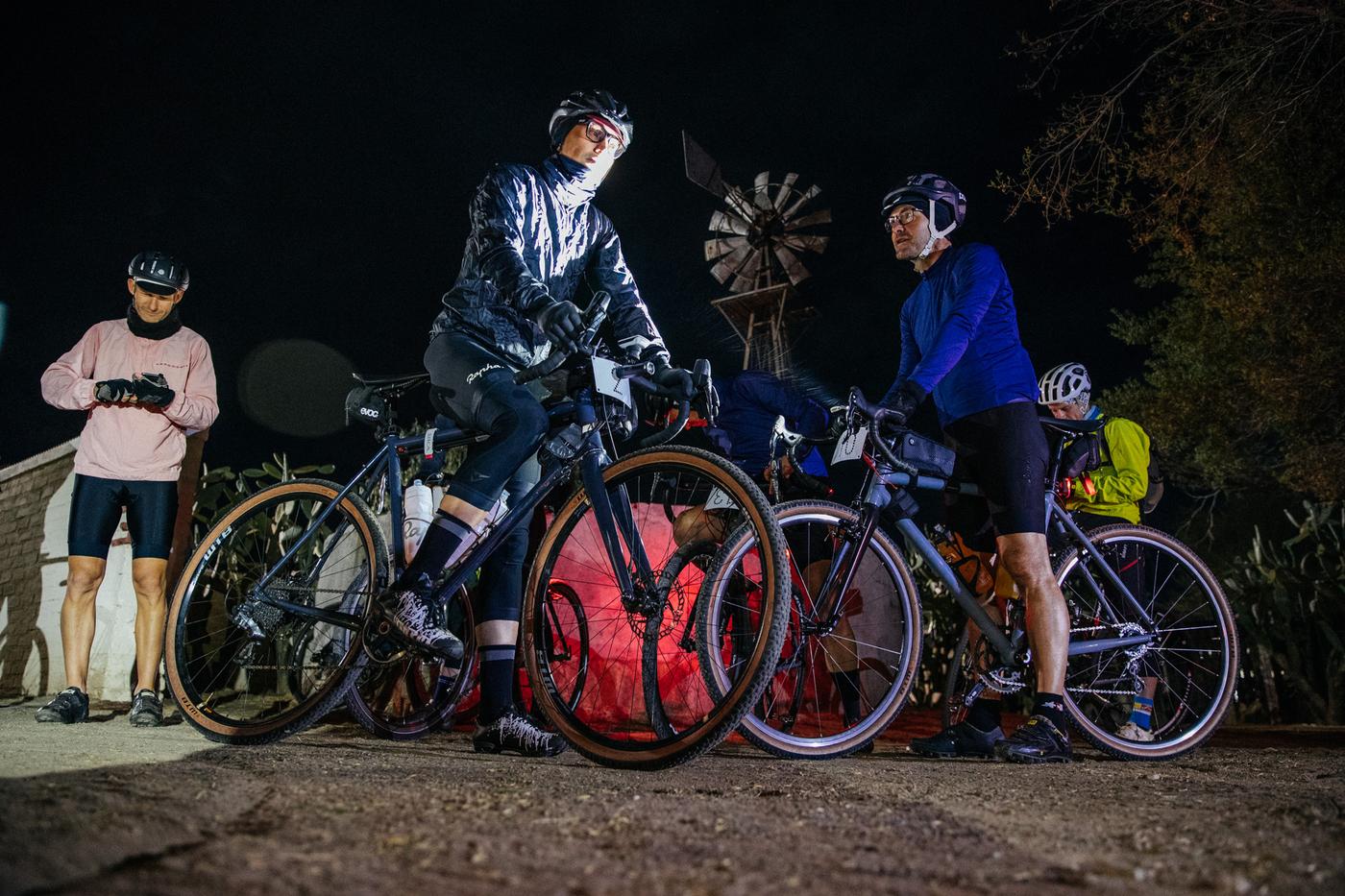 The following morning came early, with a 4am wake-up call and a 5am roll out. We’d have to cover 221km before the day’s end, or at least until the sweeper vehicles came out. For the most part, the race had very little climbs, save for the final push up Ouberg Pass. Apparently, “Ouberg” means “old way,” insinuating the steepness and impracticality of this route, but it’s the only way to go from the valley to Sutherland, our home for the evening. At any rate, we took off from Calvinia and proceeded to race the sunrise over the desert. 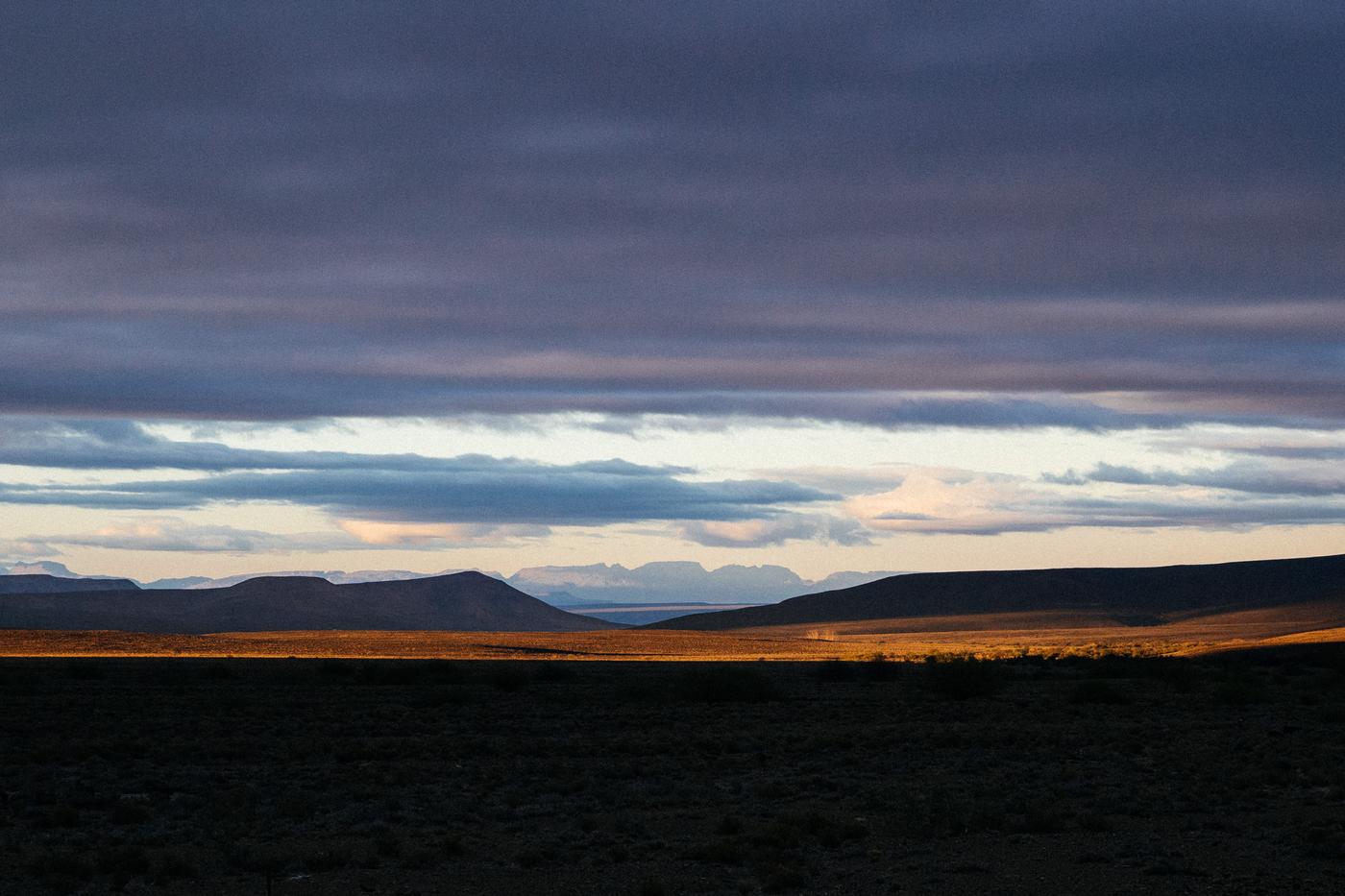 Now, the thing about the desert is, time stops at sunrise. It’s as if the light brings about a stillness that is not only seen but felt. The solar energy awakens this blanket of sand and the landscape is transformed into a soft, glowing light. Unfortunately, with the Karoobaix, you haven’t got time to spare. I tried my hardest to push on but as a photographer, I couldn’t resist. Eventually, I found myself off the back of the pack, alone, which I might add, is kind of where I like to be on rides like this. I go at my own pace, stop when I want to, and sure enough, I’ll get to where I’m going. Unfortunately, when you’re by yourself and the wind picks up, it can be hell. 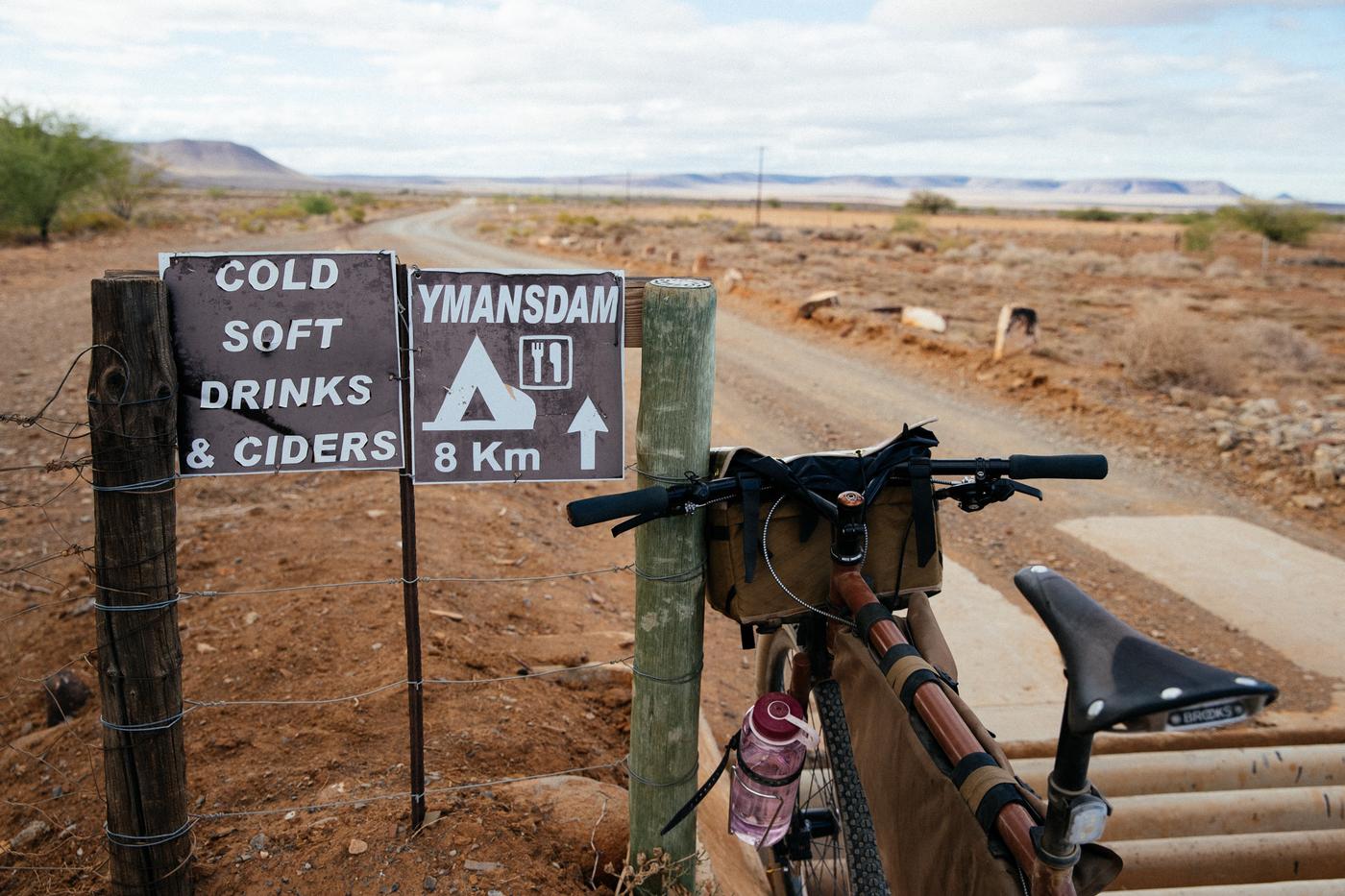 Hell it was, too. With my camera bag at the front of the bike, along with two, 1.5L Nalgene bottles, I had created a bit of a wind dam. Pushing into this, along sandy, washboarded roads proved to be quite difficult. Not to mention my bike was at least twice as heavy as most of the other race machines due to my camera equipment. But hey, I’m used to this and not for a second was I concerned. 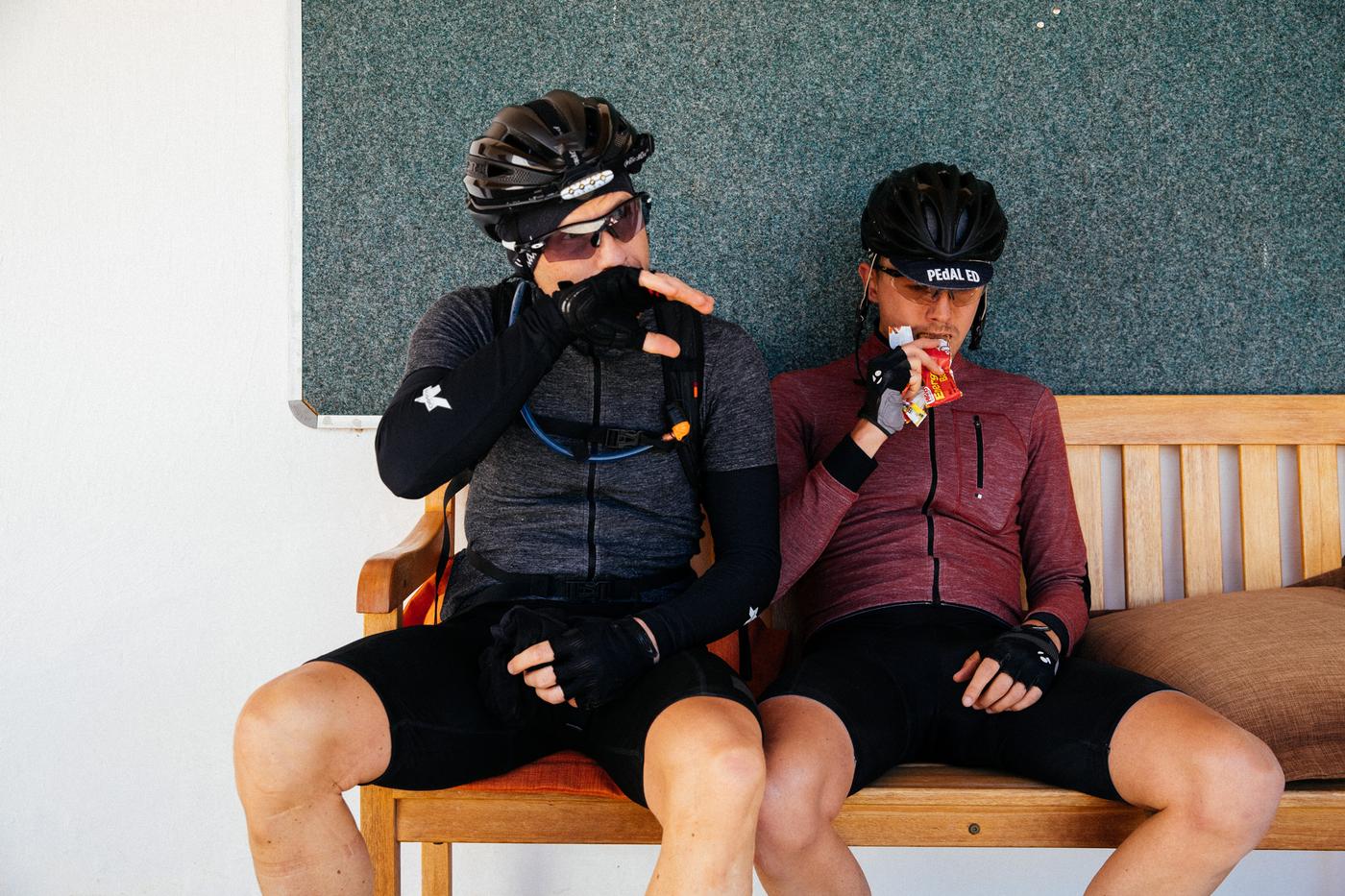 After hitting Deluxe Coffee‘s brekkie spot, I arrived at the Karoo Ranger Station, filled up my bottles and realized I had made it halfway, in a relatively fast time. Other racers arrived and we discussed how horrid the wind was, yet it hadn’t kept us down. We learned from a medic on a moto that there were about ten riders behind us too. In a group of 45 racers, that wasn’t too bad. I particularly like “racing” with the chilleurs anyway. We’ve got nothing to prove, after all. 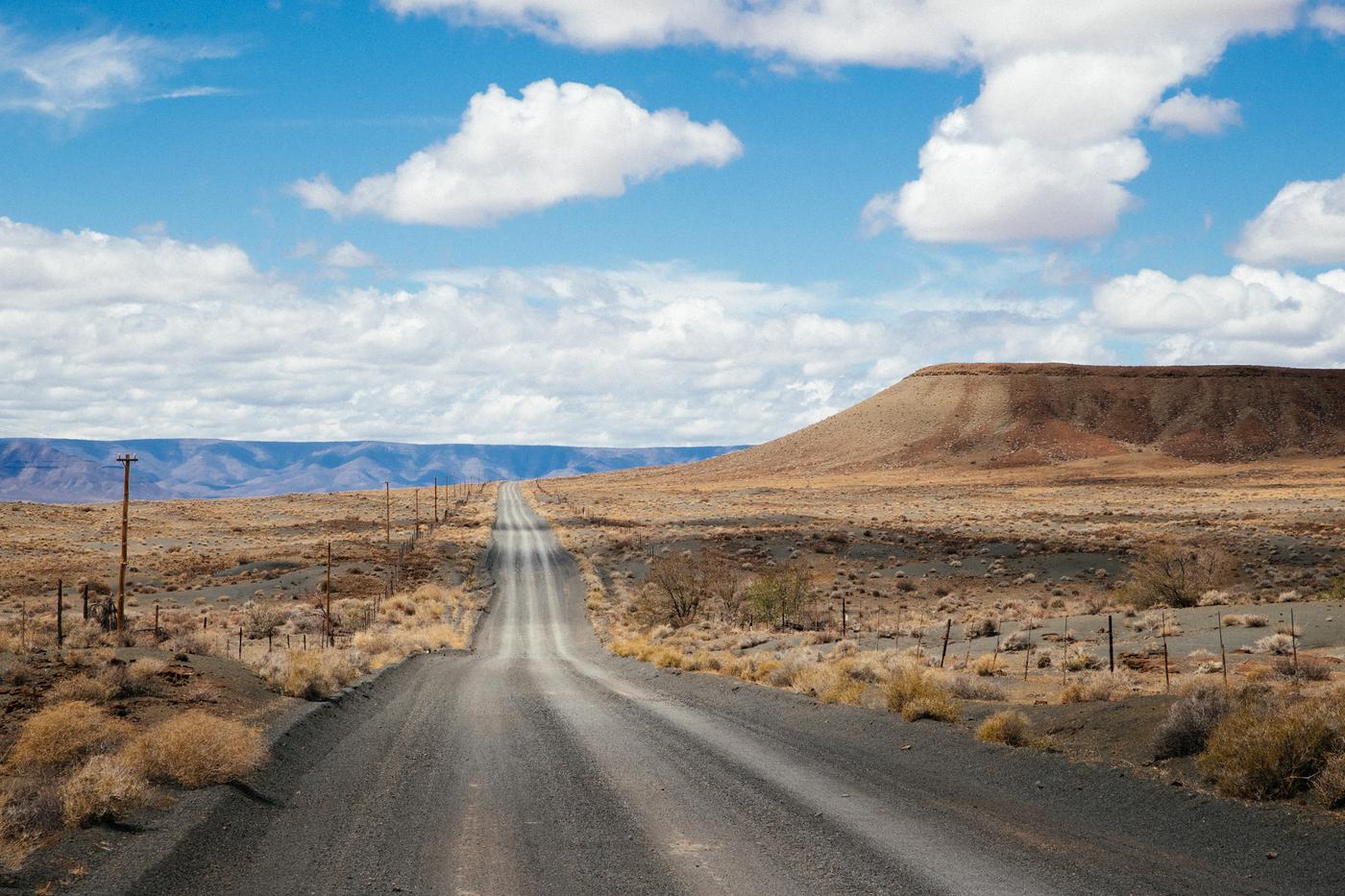 Shortly after the midway point, the wind picked up and the roads degraded. Suddenly, an old friend came to visit. My buddy the inflamed knee tendon. Yeah, it happens sometimes. Mostly when I’m pushing into a headwind or on less than ideal road conditions, which is what I was currently dealing with. My pace dropped, as did my morale and as I approached the final climb of the day, my ambitions died. To top it off, my knee had swollen to twice its size… and I still had 10 miles to go to the evac point. Up! 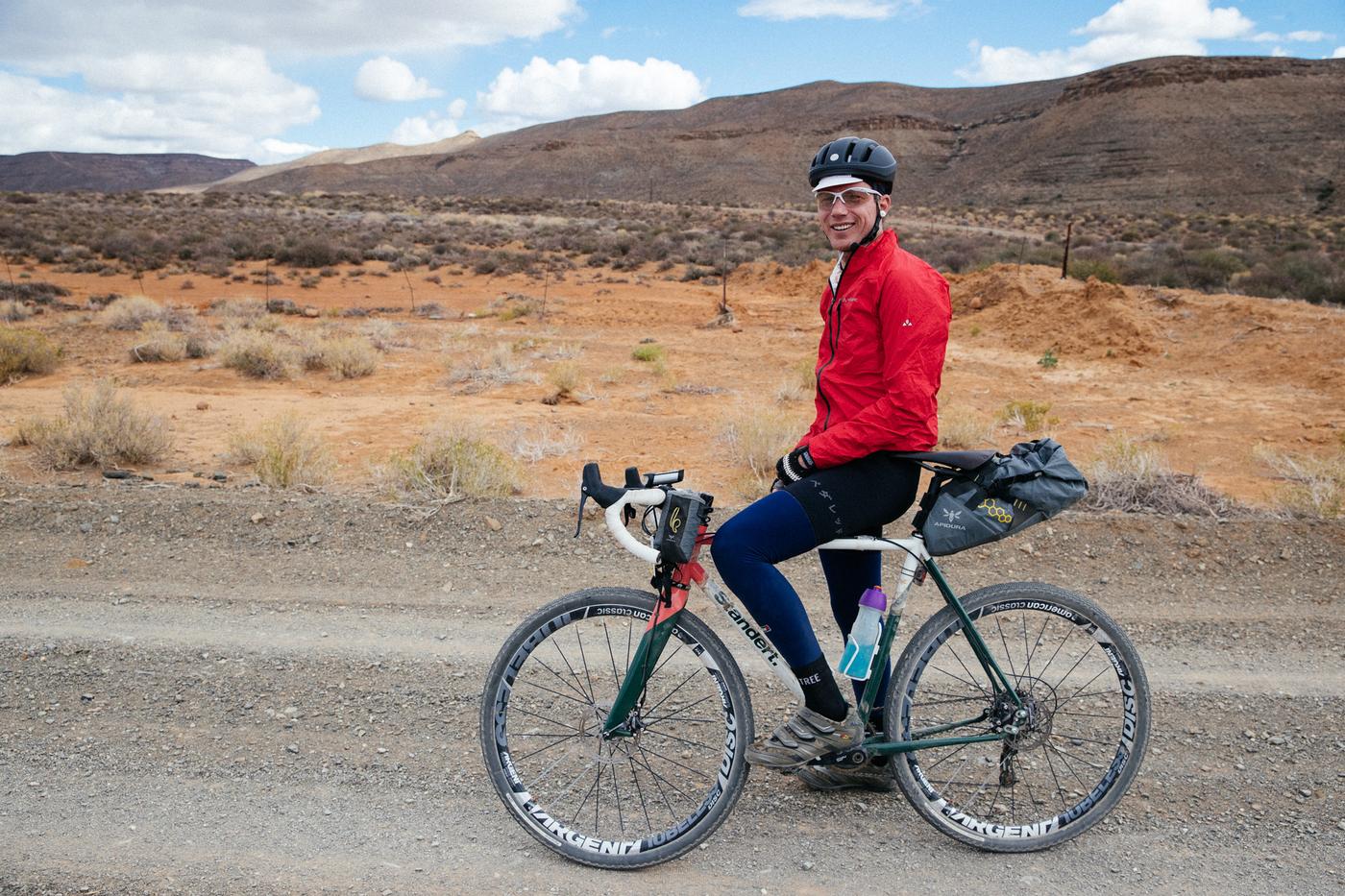 Luckily, Bregan had also found himself at his wit’s end, as he sat at the bottom of the climb with a “WHAT THE FUCK!?!?” on his face. Living in California, I’m used to steep, hike-a-bikes, but not 100 miles into a 130-mile day. He and I pushed up Ouberg Pass, making conversation and cursing the race organizer – sorry, Stan! At the top, we found a friend, Nic, in his VW bus, in a make-shift wind block. A veritable oasis at the top of a wind tunnel. We were spent. I could barely walk and I was pissed. I came all this way to get my ass kicked and this meant I wouldn’t be able to do the cycle tour afterward. I poured my remaining energy into documenting this wonderful landscape as it was transformed by the fleeting light. 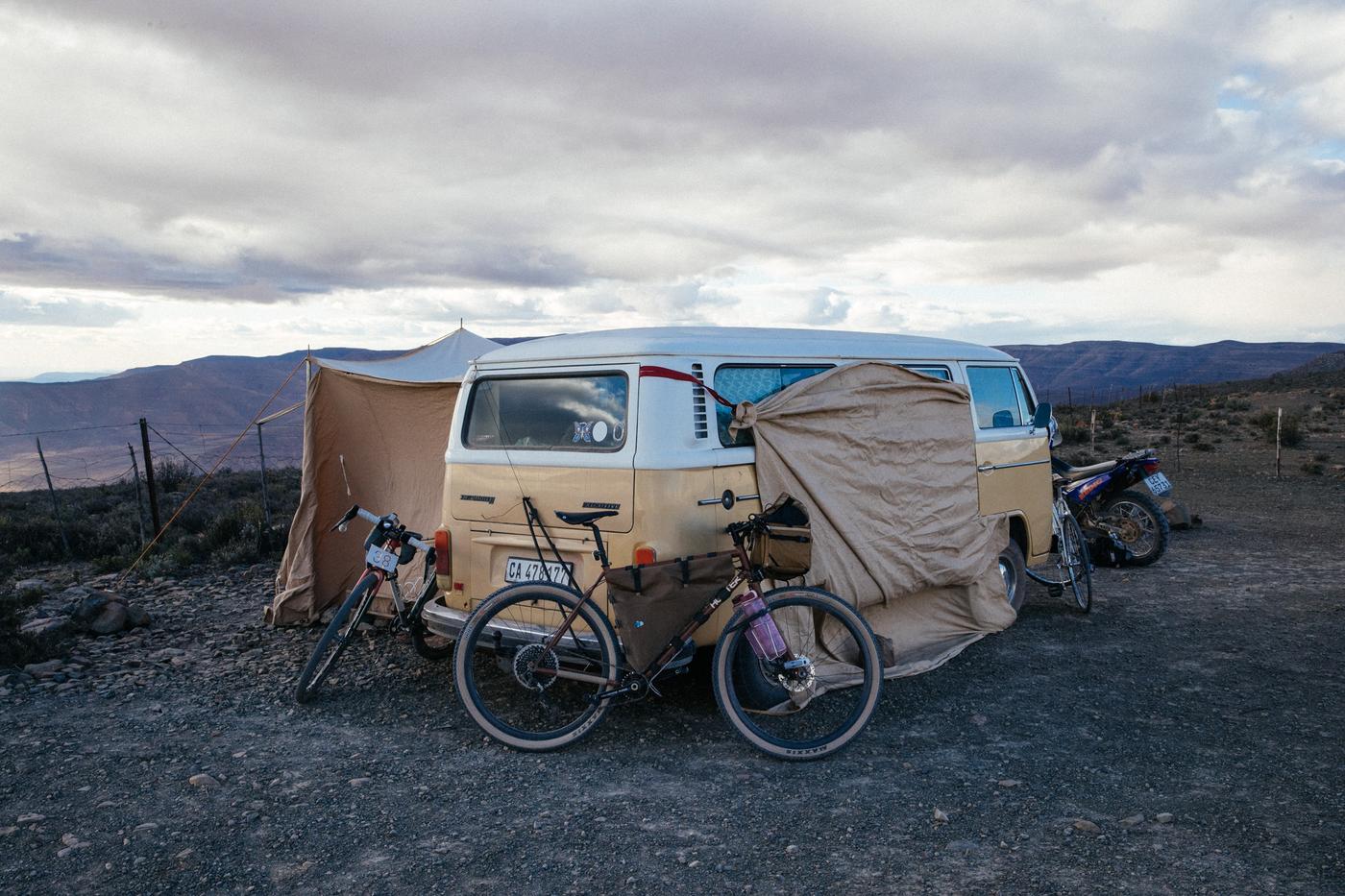 I’m not a negative person, so I tried to see the positivity in all this. This minutiae of hope kept the stoke going and as we were in the shuttle driving to the day’s destination, I was still glad to be here. 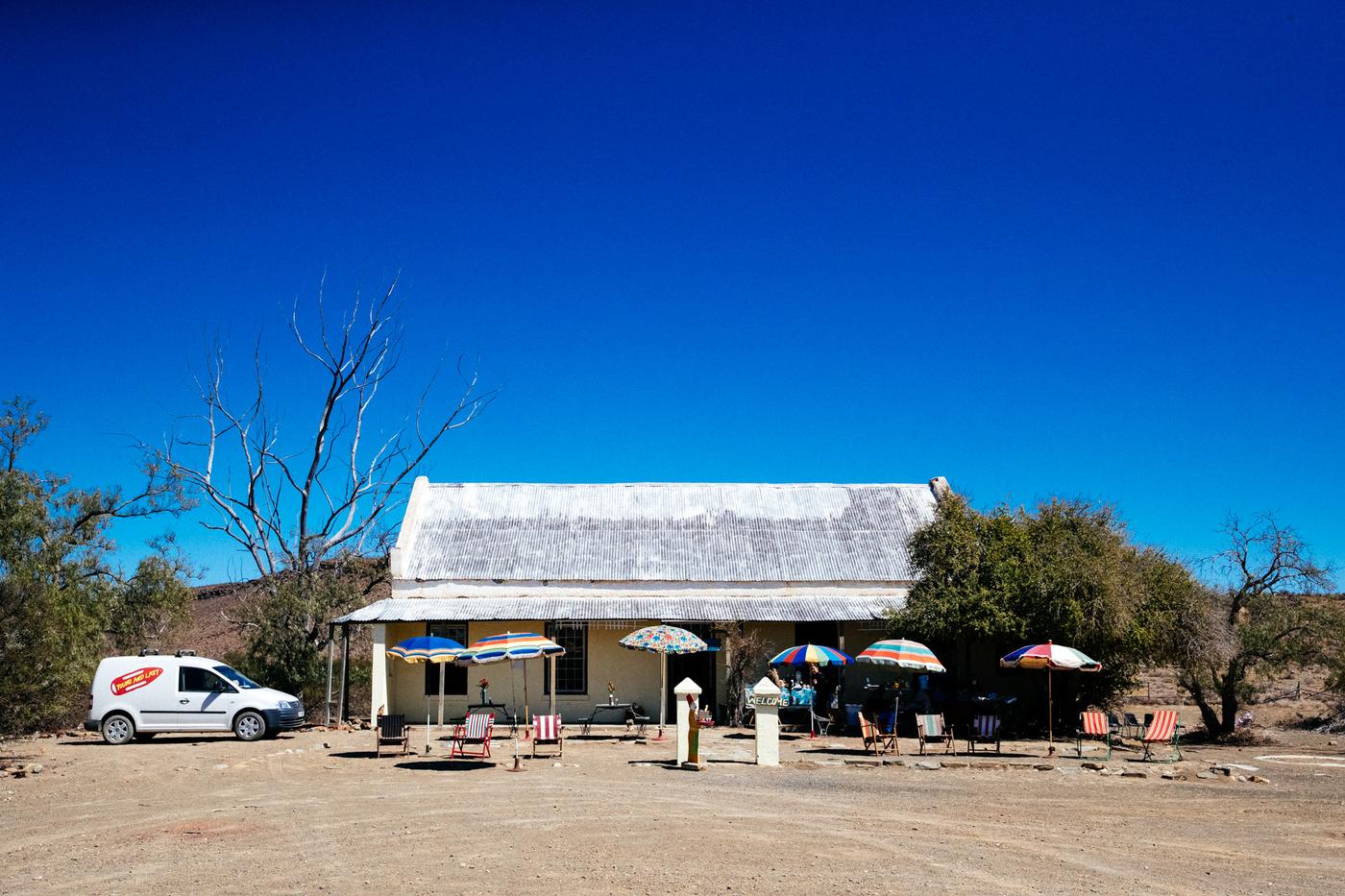 Sleep has never come so easily. I kept my leg propped up, iced it down, took advil and some CBD pills in hopes that would help. The morning came and my knee was no better. Even worse, I was so exhausted, I could barely walk. That day, while the remaining racers took to racing day two, I slept in the back of the sweeper vehicle, only to awaken at the most wonderful sight. 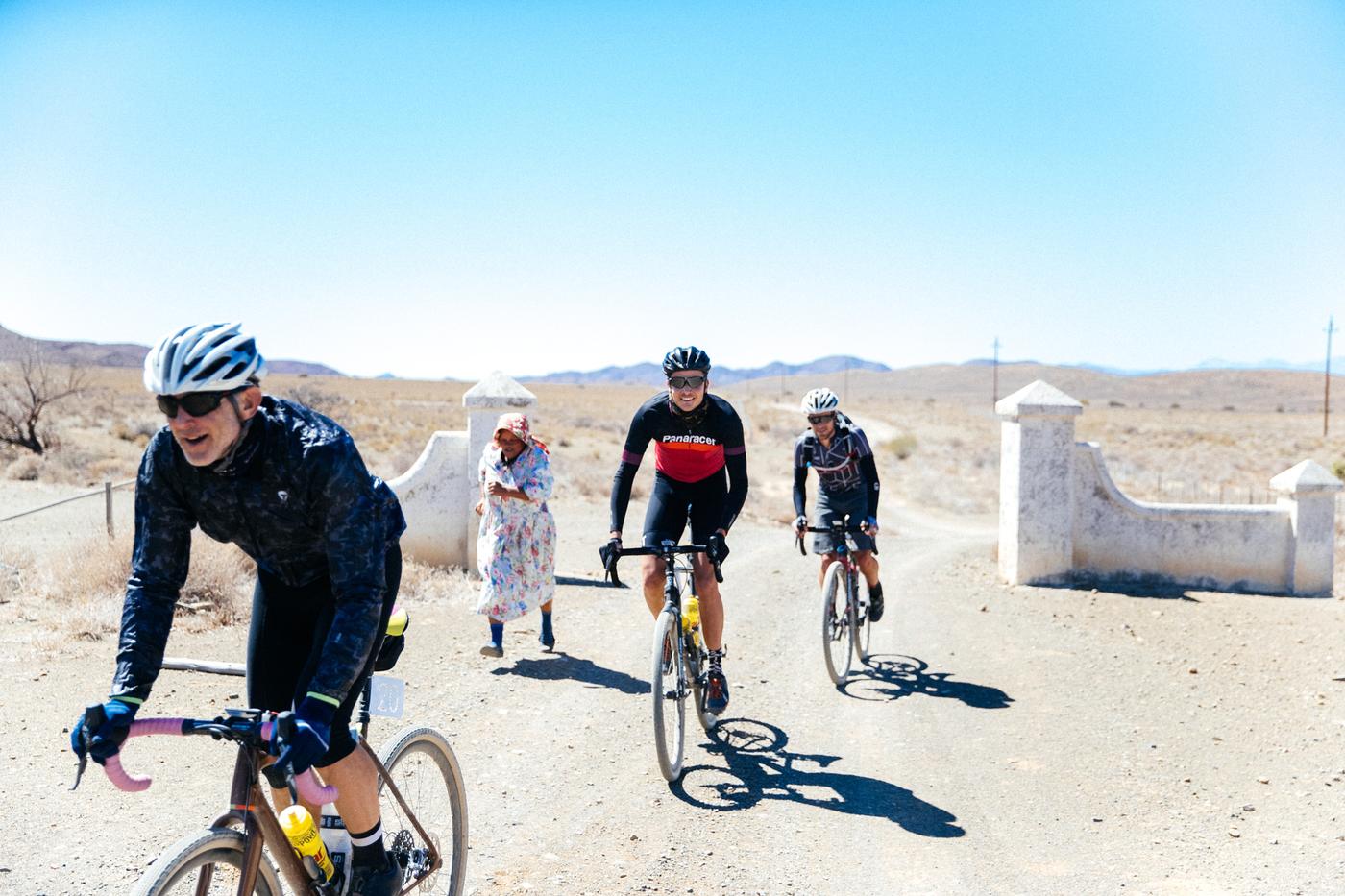 The ladies who own Clarke’s in Cape Town, along with Poppie, a local food stand vendor had made the most wonderful oasis out of an abandoned house. There they served champagne, sandwiches and other delicacies, right in the middle of the Karoo Desert. Each time racers would ride through its gates, Poppie would run out to greet them. It was such an amazing experience and one that really solidified this event in my mind. Suddenly, the Karoobaix made sense to me. It’s as much about the community support as it is the race itself. Events like this wouldn’t happen without this love. 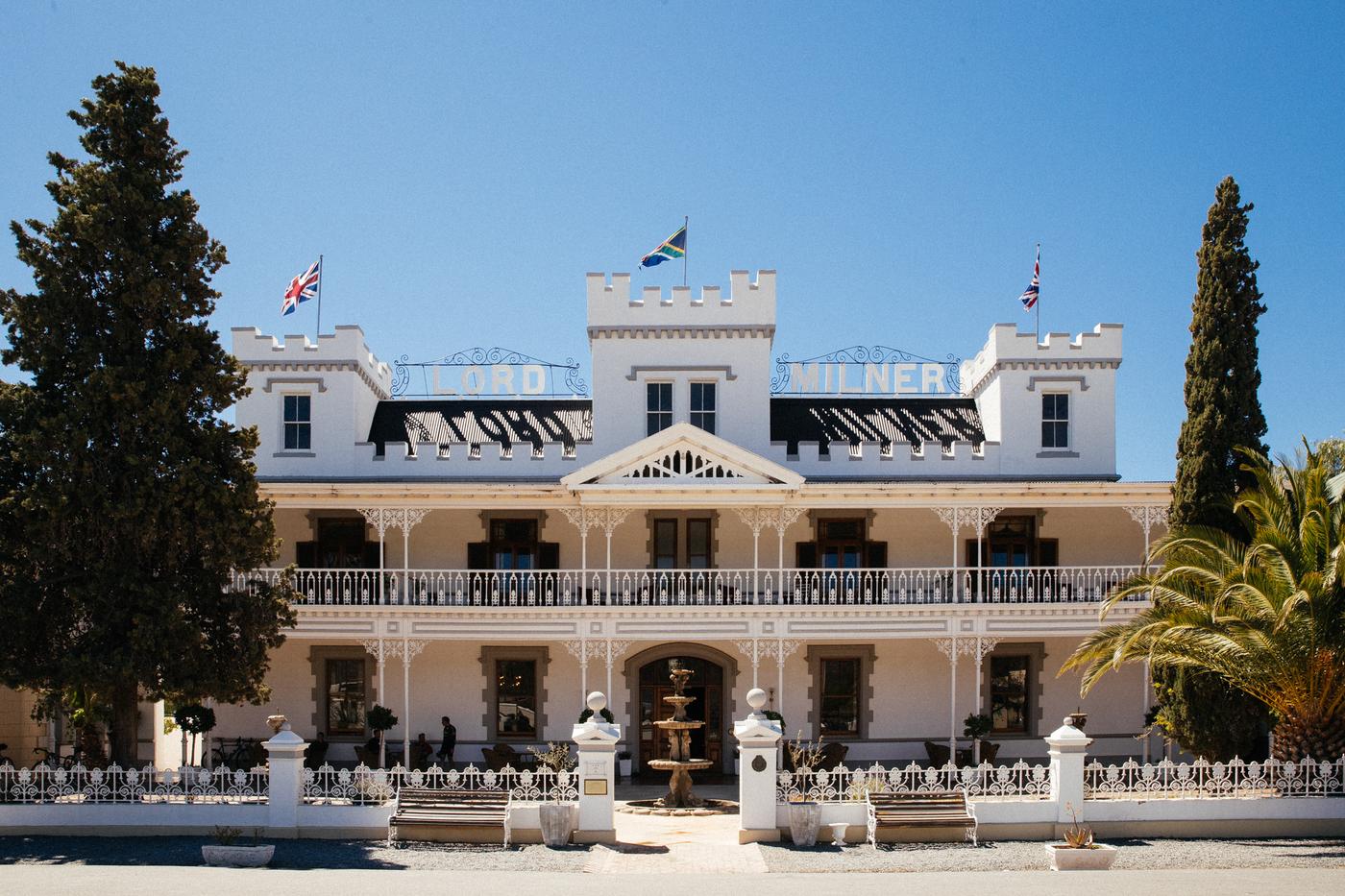 With a newfound ambition, I wanted to make the best of my remaining time in this magical place. Upon arriving in Matjiesfontein, our final destination, I began exploring this one-street town and our hotel, the Lord Milner. Straight from a Wes Anderson film, this place is a snippet from colonial South Africa. With gardens, walkways and a swimming pool, the photographic tour of the grounds took my mind off my swollen knee and put all my remaining energy into documentation. 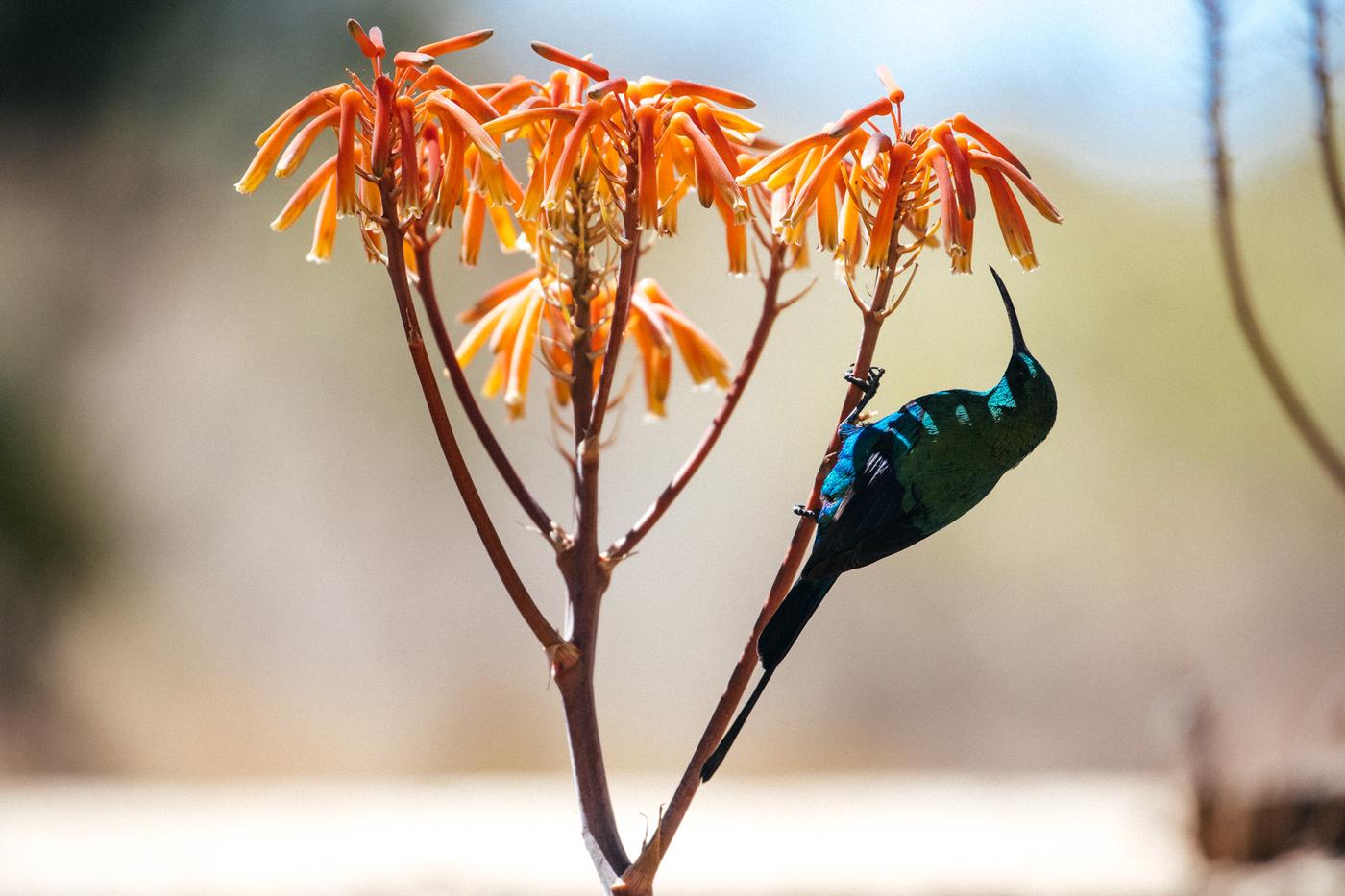 Unbelievably, I had barely seen a single animal on this ride. Even the desert flora, when compared to our deserts in the US was slim but at the Lord Milner, the gardens were lush with beautiful birds and… oh SHIT! That’s a cobra! As I was exploring a cactus garden, a cobra, basking in the sun, skirted away into the brush… 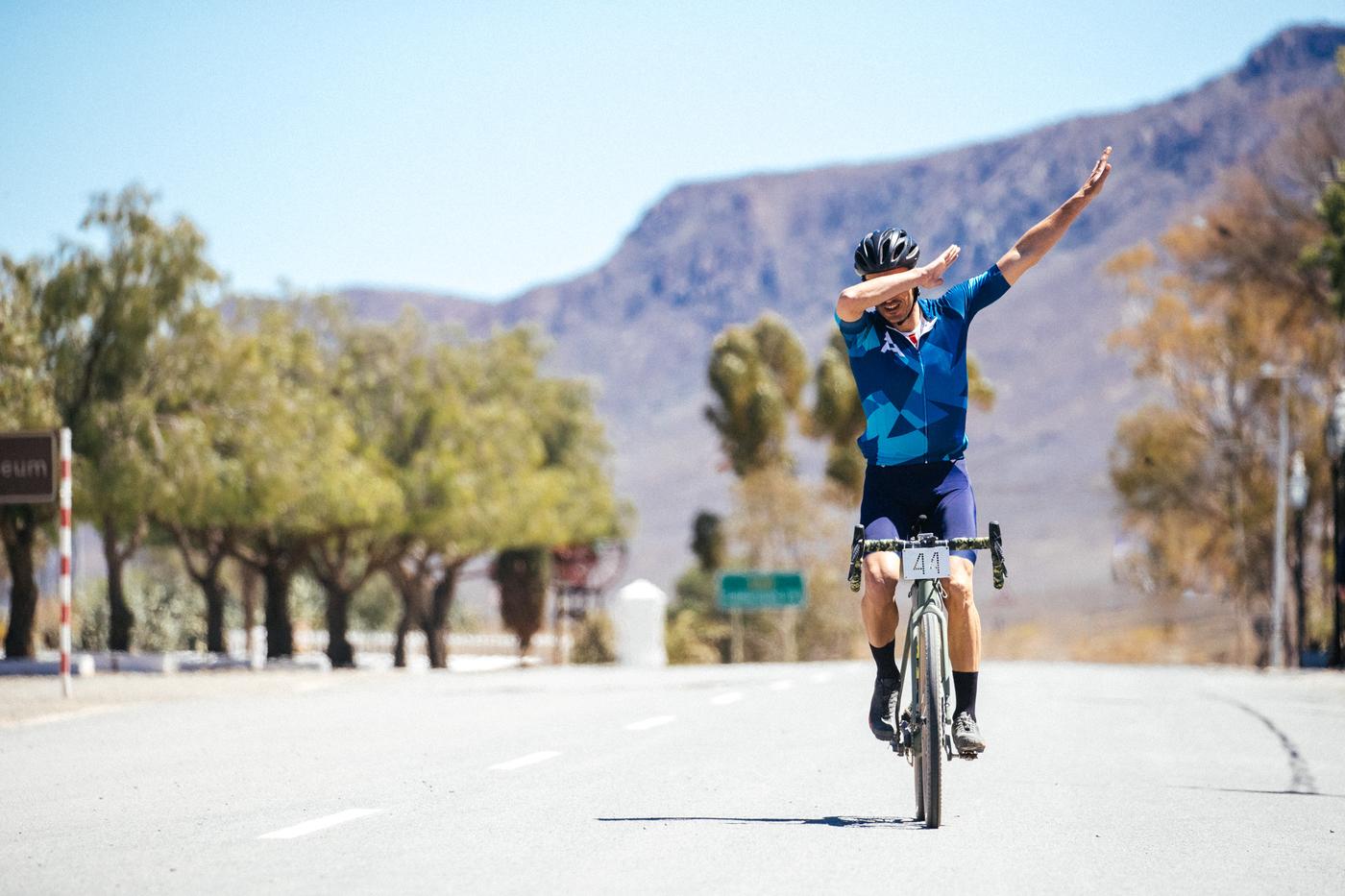 The rest of the afternoon spent photographing racers as they finished the course, shooting bikes and doing my best to be social. Admittedly, I was in a pretty dark place still, bummed out about my knee and not being able to go on the tour, but I tried to hold it together and put my mind on photos. Oddly enough, the race itself wasn’t a mental challenge to me, but not being able to ride in the tour was crushing my spirit. Then, something happened. Perhaps it was the golden glow of the fleeting sun, or the smiling conversations, but I finally let go of my expectations and really soaked in the magic of this place. As I talked to Stan about the event, I patted him on the back, giving him praise and saw his face light up. Every single person was stoked. No one was hurt – save for me – and the locals in Matjiesfontein absolutely loved us. Evenings like that are often too rushed and this was no exception. Before I knew it, everyone was taking off on a shuttle back to Cape Town the next morning, our troup of cycle tourists were packing up and Nic offered to give me a ride back to Cape Town in his VW Bus. With only a few hours left in my stay, I edited photos and began to jot down my thoughts. 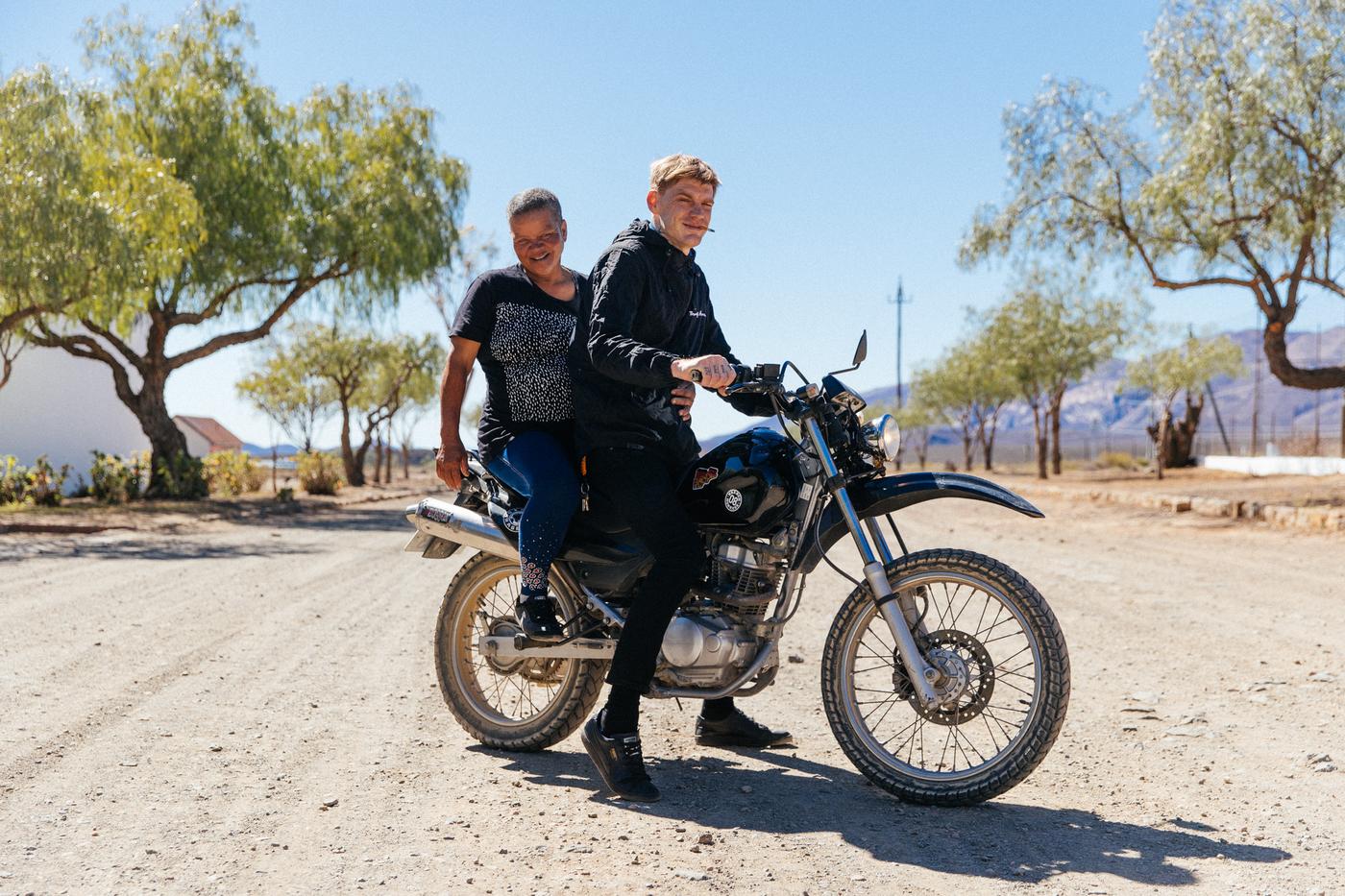 While races like the Karoobaix serve the local cyclists, traveling internationally to these events is one of my favorite experiences. You get to sample the local flavors, soak in the culture and ride new places. The desert is my favorite place to be and now I’ve checked one more off my list. Next year, I’ll return, but perhaps I’ll save my energy for the bicycle tour.

I want to thank Stan, his team and everyone that made the Karoobaix possible this year! If you’re interested in what Stan does, check out the Tour of Ara and the Karoobaix.