At a time when every voice counts, it’s important to stand up and use yours to support those in, and outside your community. As an athlete with a platform, professional CX racer Tobin Ortenblad, and his good friend and fellow racer Dillon Hollinger, wanted to use their own voice to bring the cycling community together by raising awareness for social injustice. ​To do this, Tobin and Dillon developed a fundraising campaign around an Everesting attempt, but with a little twist… The concept of Everesting is fairly simple: find a hill, ride up it, then down it, and repeat until you’ve climbed a total of 29,029 feet. But who actually likes to do hill repeats? Instead, Tobin and Dillon turned this into a 200+ mile adventure throughout the Santa Cruz Mountains without a single hill repeat, all to raise money for two causes they really believe in: B​lack Lives Matter and Bike Santa Cruz County’s Youth Advocacy Program. What began as a $6,000 GoFundMe goal, turned into a $20,000 fundraising campaign in just four days.
At 4:45 AM on Friday, June 12th, my boss Tom and I arrived at the Ortenblads with a handful of Light & Motion bike lights to keep both Tobin and Dillon lit throughout the day and possibly into the night.

As we pull up, Tobin is already outside icing down 1 of the 3 coolers filled with the day’s fuel and hydration. A ride this long doesn’t necessarily require “top end” fitness, but it does require a whole lot of endurance and mental strength. Completing it will require a steady pace all day. Arguably for a ride of this magnitude, the most important part is staying on top of nutrition and hydration. Your body will need to intake anywhere between 200 to 300 calories per hour, while also staying hydrated. Tobin’s parents Rick and Deana, along with Dillon’s girlfriend Candra, volunteered to drive sag (slowly behind them with their flashers on) for the entirety of the route, carrying food, drink, spare wheels, warm clothes, and the moral support needed for a 200+ mile day of riding. 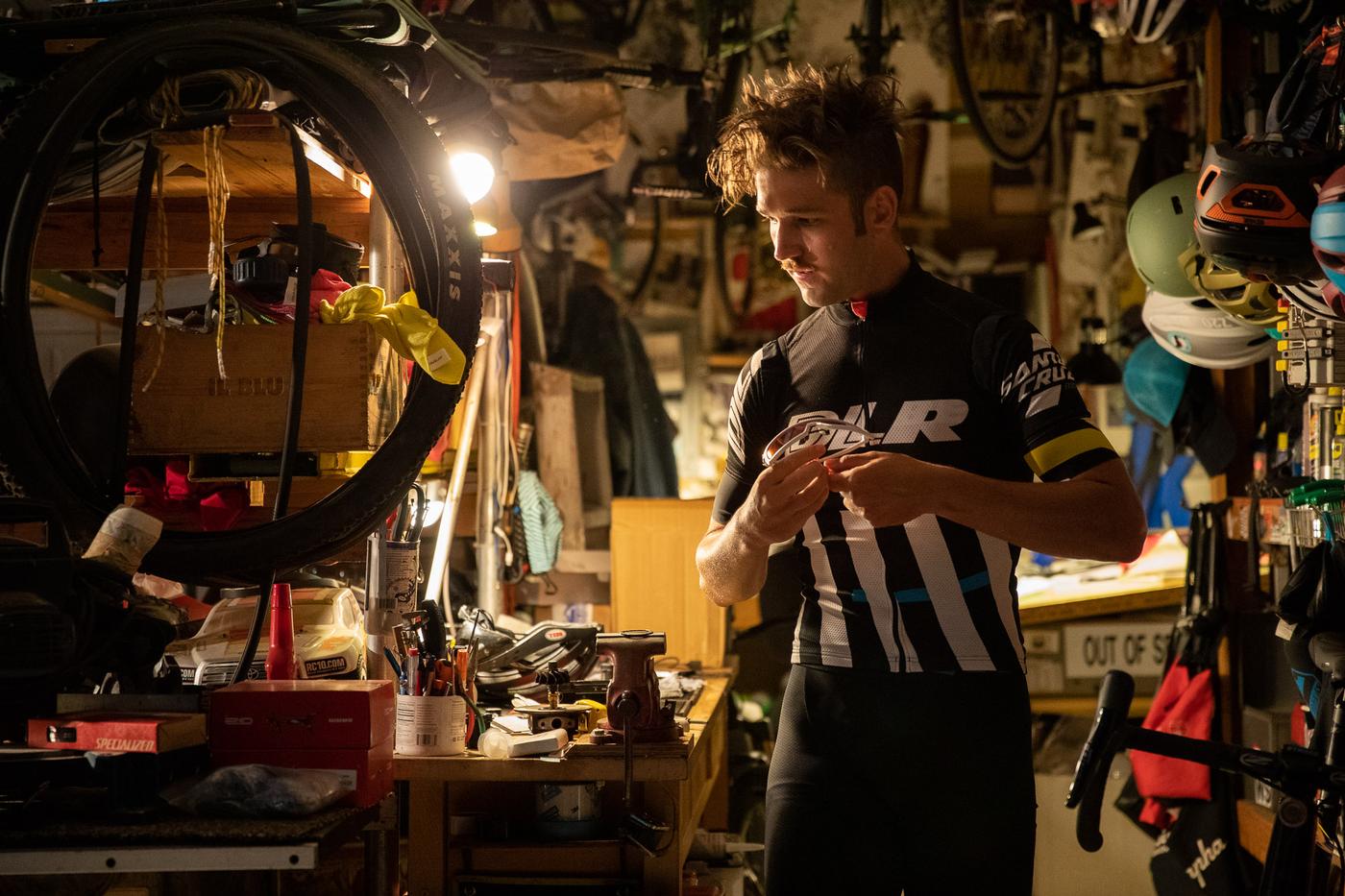 At 5:42 am, as it was just starting to get light out, you couldn’t have asked for more perfect weather as Tobin and Dillon, with two friends in tandem that would join for the first couple hours, rolled out of the Ortenblad’s driveway through the thin layer of fog. 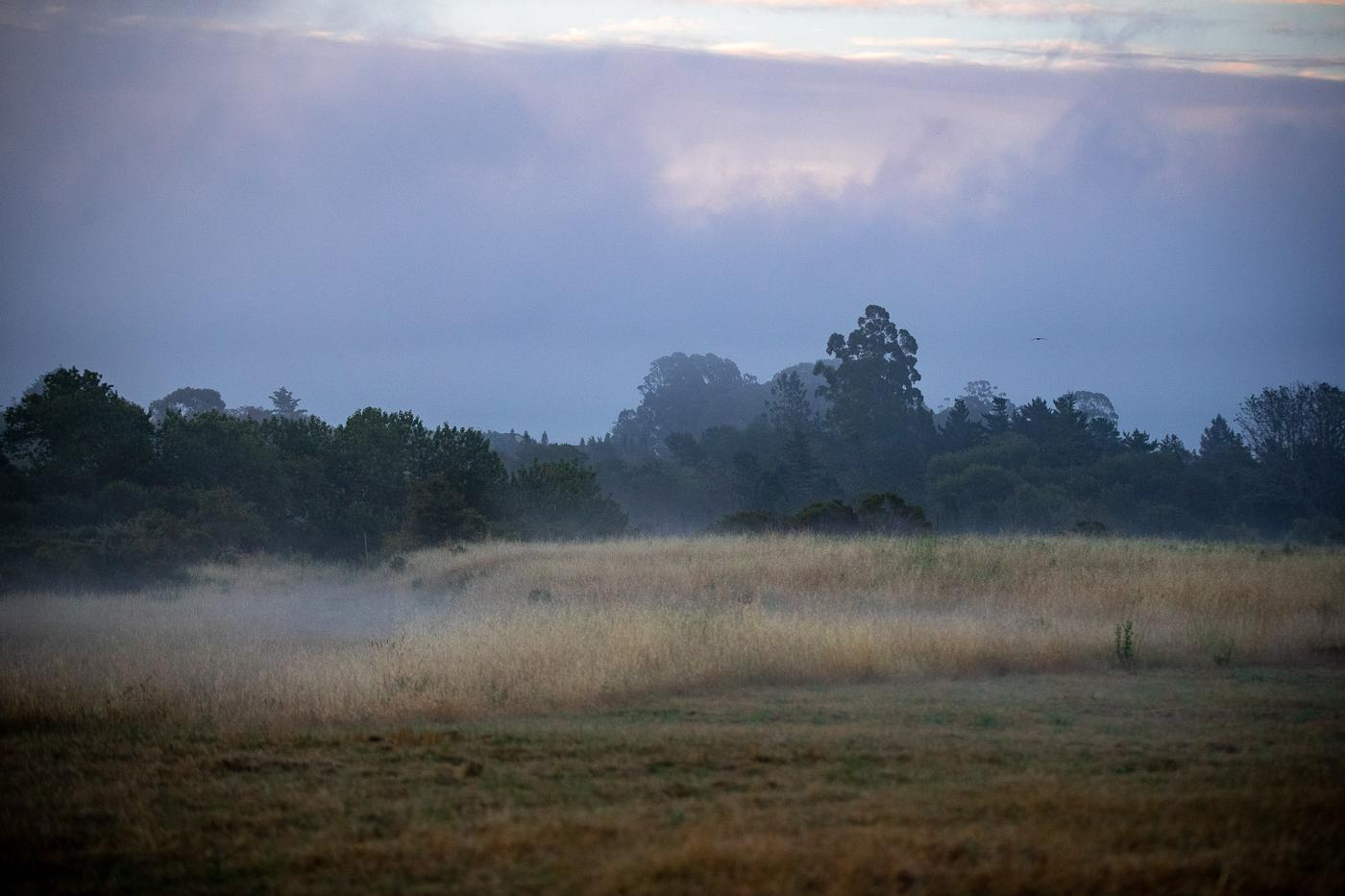 Before even climbing 1,000 feet, the arm and leg warmers were peeled and they set out towards a set of local climbs that branch off Empire Grade. They descended each one, only to climb right back up it. “Descending and then immediately flipping a U-turn at the bottom to just climb it again is quite odd. No rest, just turn and burn” said Tobin. Even though I personally have ridden all but one of these roads on their route, It was hard for me to navigate to keep track of them as we drove ahead to post up for photos. For me, I’m usually putting together some sort of loop or out and back for a ride, but this was just flat out nuts. Throughout the day, it was kind of hard for me to tell if Dillon or Tobin were actually feeling fatigued or not during the ride. They seemed to be fairly chatty, smiling, and laughing a majority of the time. They pushed on out of Boulder Creek down Bear Creek Road towards the Lexington Reservoir where two friends were waiting to ride with them and head back up. Two new people with fresh legs joined and the pace was set a little bit higher. Towards the end of the climb, roughly 60 miles and 10k into the ride, the chatting stopped and Dillon fell silent. “I was in a dark place. Muscles were twinging, mind was wandering, and I was 100% sure there was no way I’d finish the ride. But, with a dose of sugar that was about 15x daily recommended value, the thought of the difference that we’d be making by finishing the ride and donating our funds, and my unwillingness to make my buddy Tobin finish the ride by himself, I was actually able to pull my head out of the clouds and get it back together,” said Dillon. Bike Santa Cruz County just so happened to pick the top of Bear Creek and Highway 35 to set up and wait with refreshments and positive vibes for the guys before they pedaled towards Highway 9, and two back to back large climbs—Page Mill and Alpine Road. 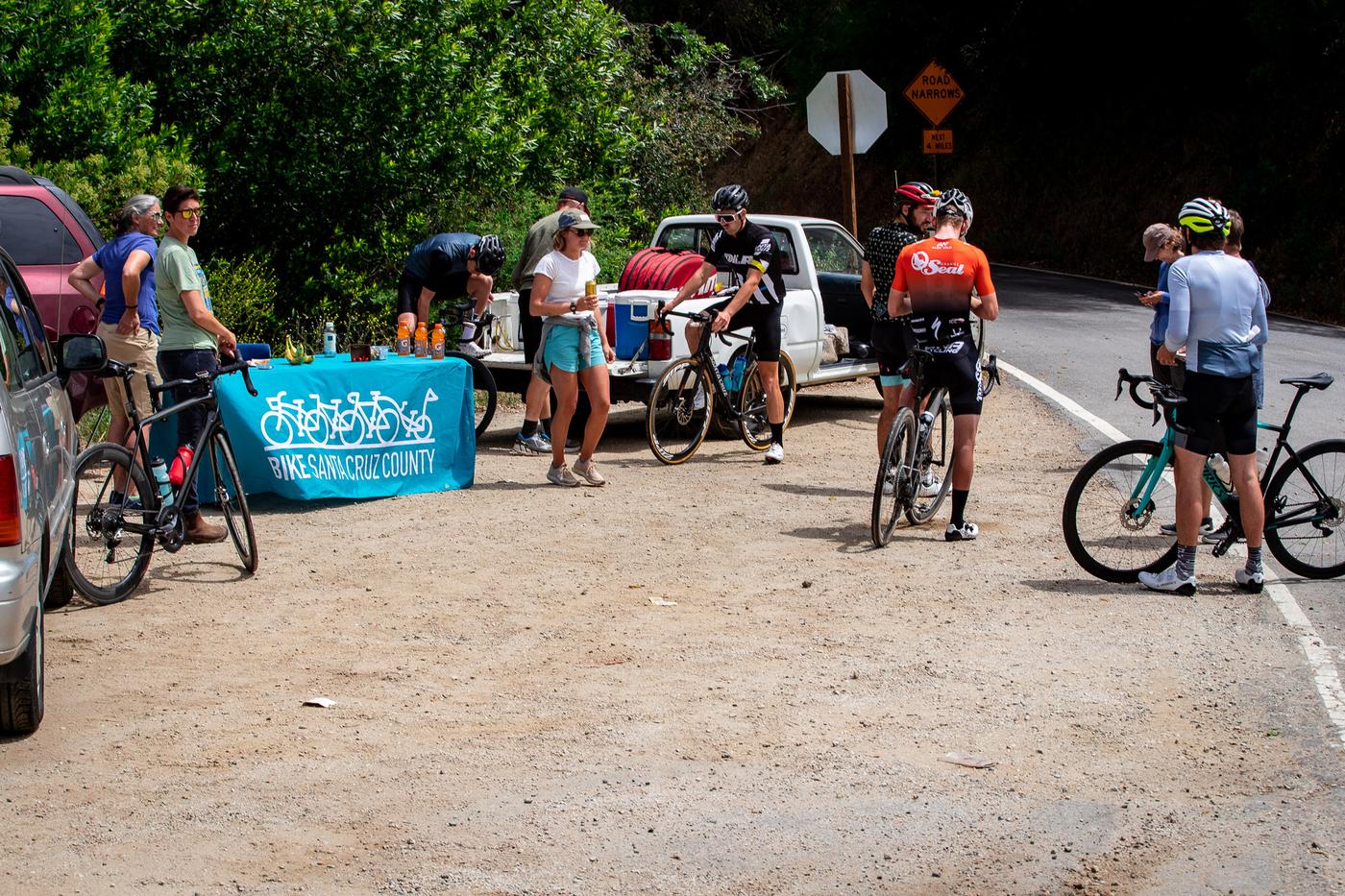 On their way down Summit, Dillon and Tobin were met at the intersection of 9 and 35 by a couple of Rock Lobsters, Dillon’s parents, their dog Sophie, and the rest of us before setting off to climb both sides of Highway 9. 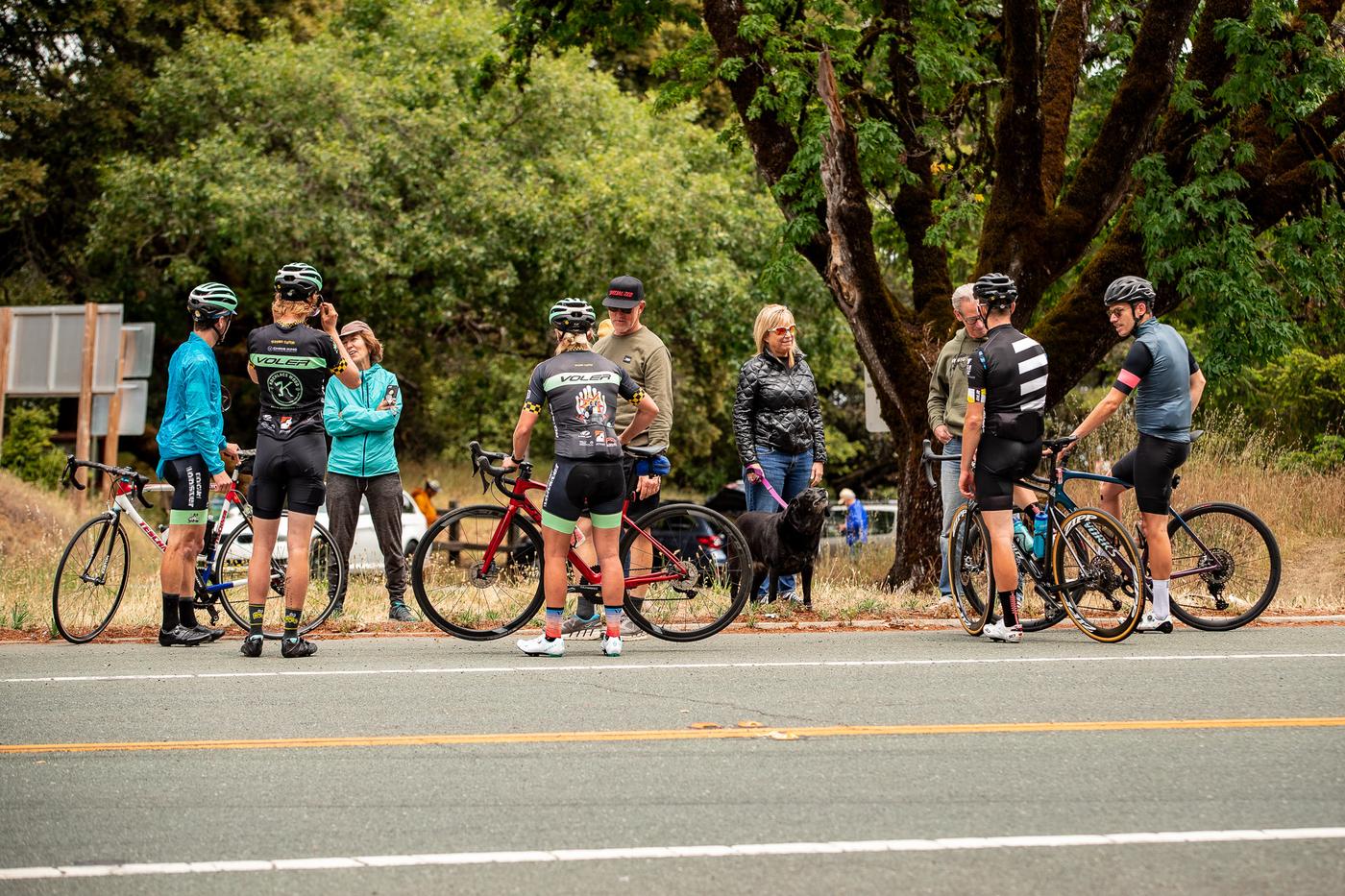 In the meantime, Tom and I drove to Page Mill Road to set up for a photo. Page Mill is a beautiful road that starts in Palo Alto and winds its way back up to Summit with stunning views of the Bay. Early that morning, Tobin had shared his location with me on his phone, and we had been using it to track them throughout the day, but the reception is pretty spotty in places on the Summit. As I was waiting on a corner for them to descend, I thought that it was taking them an unusual amount of time to get to us. I pulled out my phone to check where they were and Tobin’s phone said that his location was at “Jamison Health Center” in San Jose and the dot wasn’t moving. I thought to myself, “oh shit, something happened!” I tried to call and text everyone, but nobody was answering. This went on for at least 40 minutes until I finally got a text from Candra saying it was a mistake, and they were headed our way. Just as I put my phone back in my pocket, Dillon and Tobin came down fully leaned into the corner where I was set up with my long lens—phew. 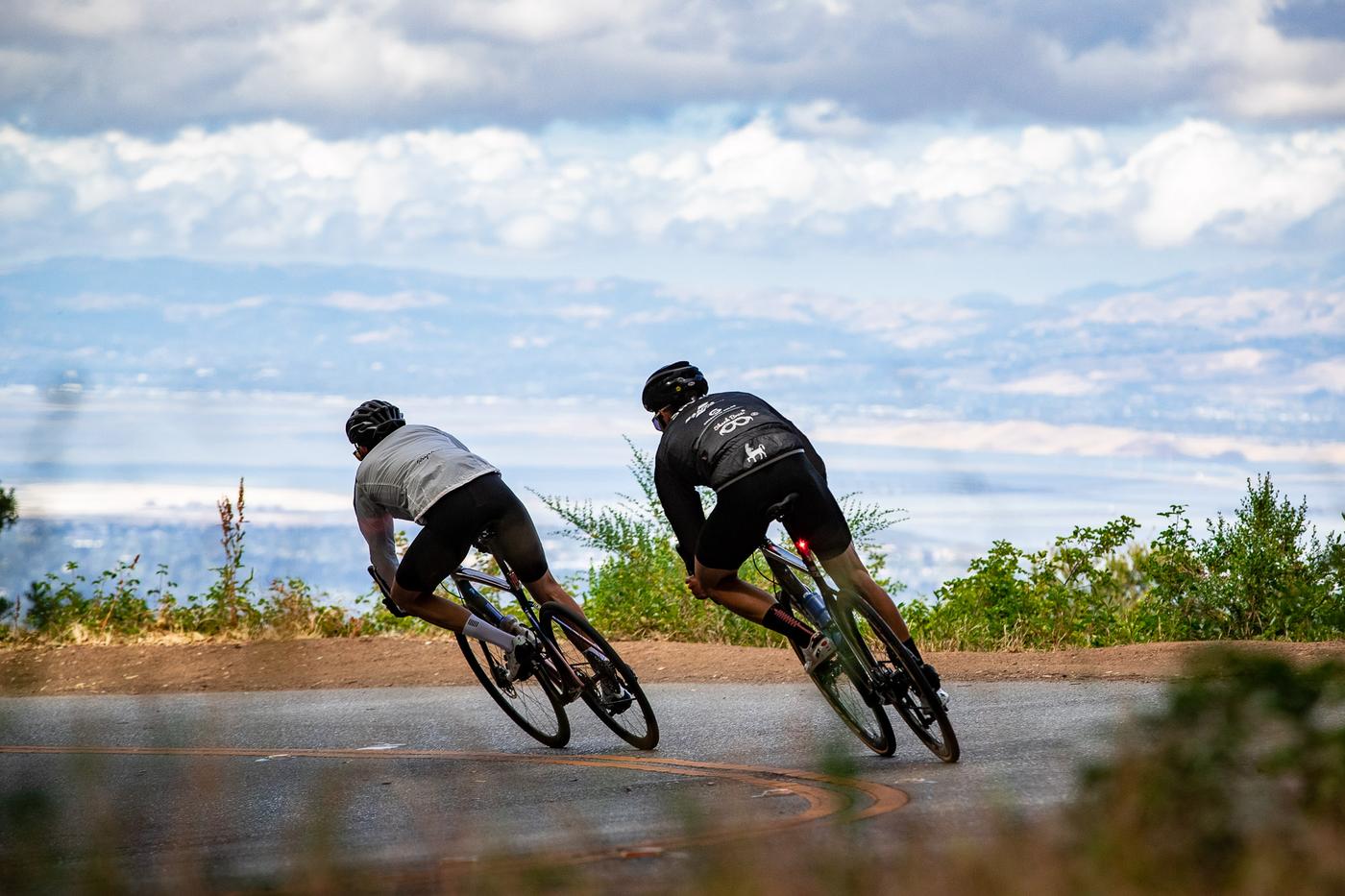 They rode down to Alexis drive and turned back around to head up to enjoy the view. In the middle of the steepest pitch, Candra and Dillon’s parents were waiting with handmade signs reading; “Miles for Smiles, Equality is the Goal” and “Big Ride for a Bigger Cause: BLM!” They ascended to the top of Page Mill, crossed over Summit, straight down Alpine almost all the way to the coast, “turned and burned” then headed back up to the top with high spirits and even better views. 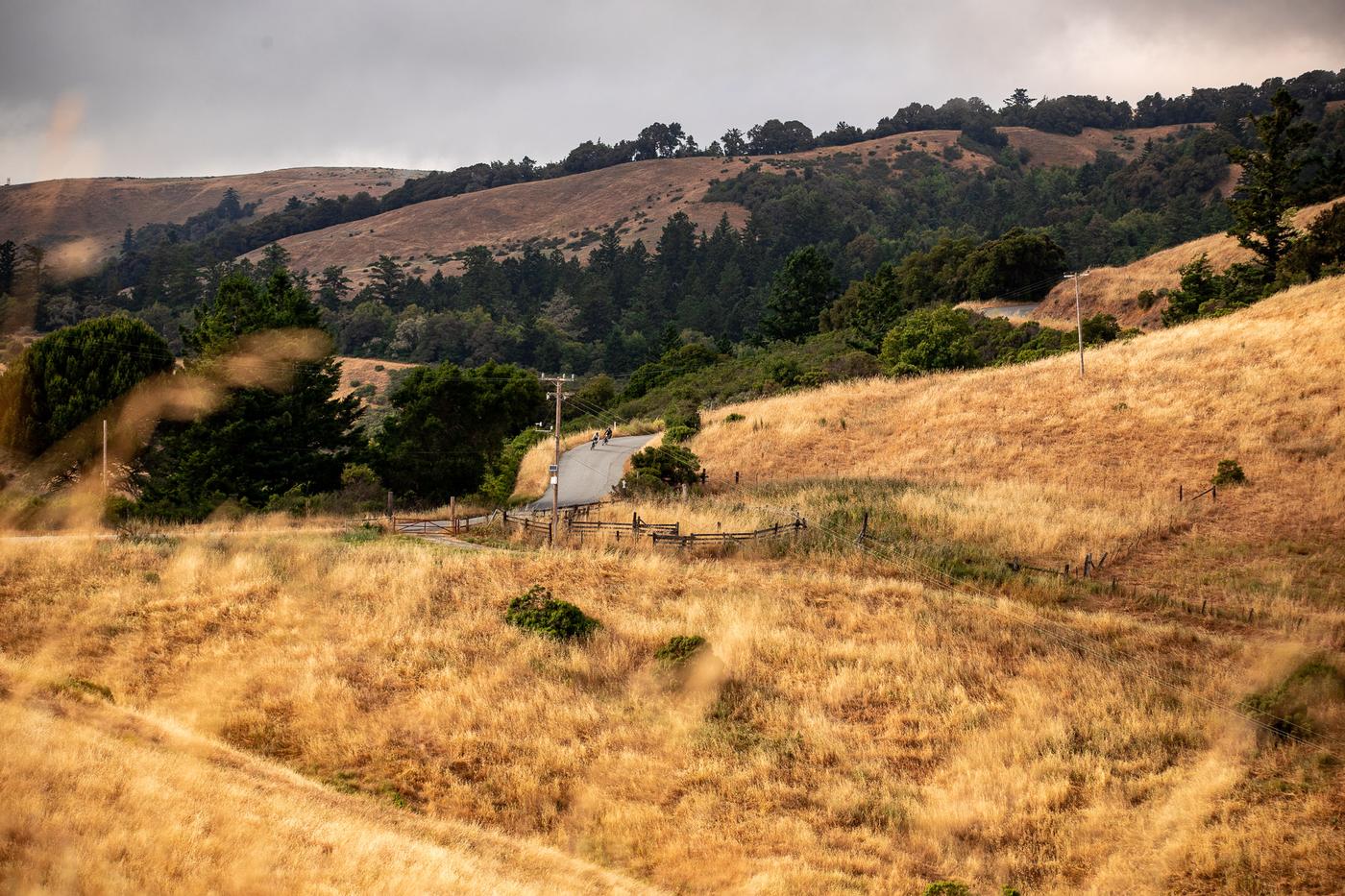 As they headed south on Summit towards Big Basin, it was apparent that they would be finishing in the dark. As the sun set around 8:30 PM, Tobin and Dillon were descending Highway 236 into Big Basin State Park where they were joined again by two friends to roll with them the majority of the way home. They now needed lights to see and had roughly 60 miles to go, but that didn’t mean the climbing was over yet. 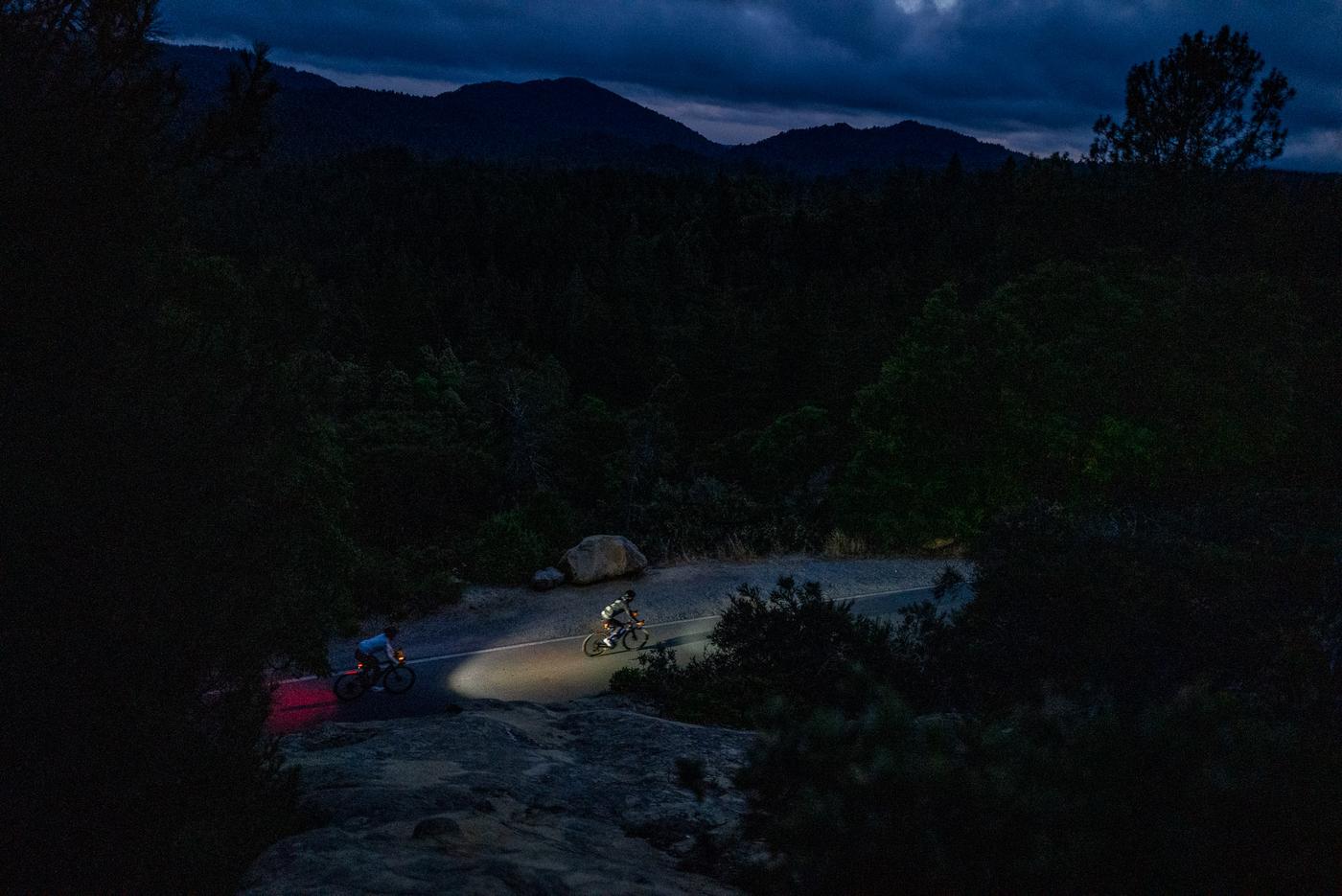 Jamison Creek Road may have been nearing the end, but was one of the worst climbs of the day for Tobin with its 3 miles at a 10% grade. “This climb is where I fell silent as the other three talked and made jokes. I’m not sure who noticed my silence first. Whoever it was, they picked up on it and checked in on me. I was fine, I just wanted to get the grind that is Jamison over with. Once we crested Jamison it felt like we were home even though we had two more climbs to go.”

The four of them made their way back up to Empire Grade towards Bonny Doon Road, ultimately descending it at 50 MPH at 11:30 at night, under the stars. “Was it smart death tucking at 50mph in the darkness? No. Was it fun? Hell yes. Regularly training on these roads gave me a false sense of security for sure” says Tobin. After reaching the top of Bonny Doon Road, they turned right onto Smith Grade for the absolute last climb of the route.

“At the beginning of the day, we made a pact that neither of us would half wheel, attack, or leave the other…until Smith Grade,” Dillon explained. But by the time we got there, with over 15 hours of ride time in our legs, we decided to call a truce and roll across the top together.”

After reaching the top of Smith, back up towards UCSC campus, it’s a short mellow descent back into town to the Ortenblad’s house where we were all waiting to greet and congratulate them. They arrived in the driveway just after midnight at 12:19 AM. There were still a few faint smiles, but Dillon and Tobin were, for the first time, looking like they were finally ready to get off their bikes. 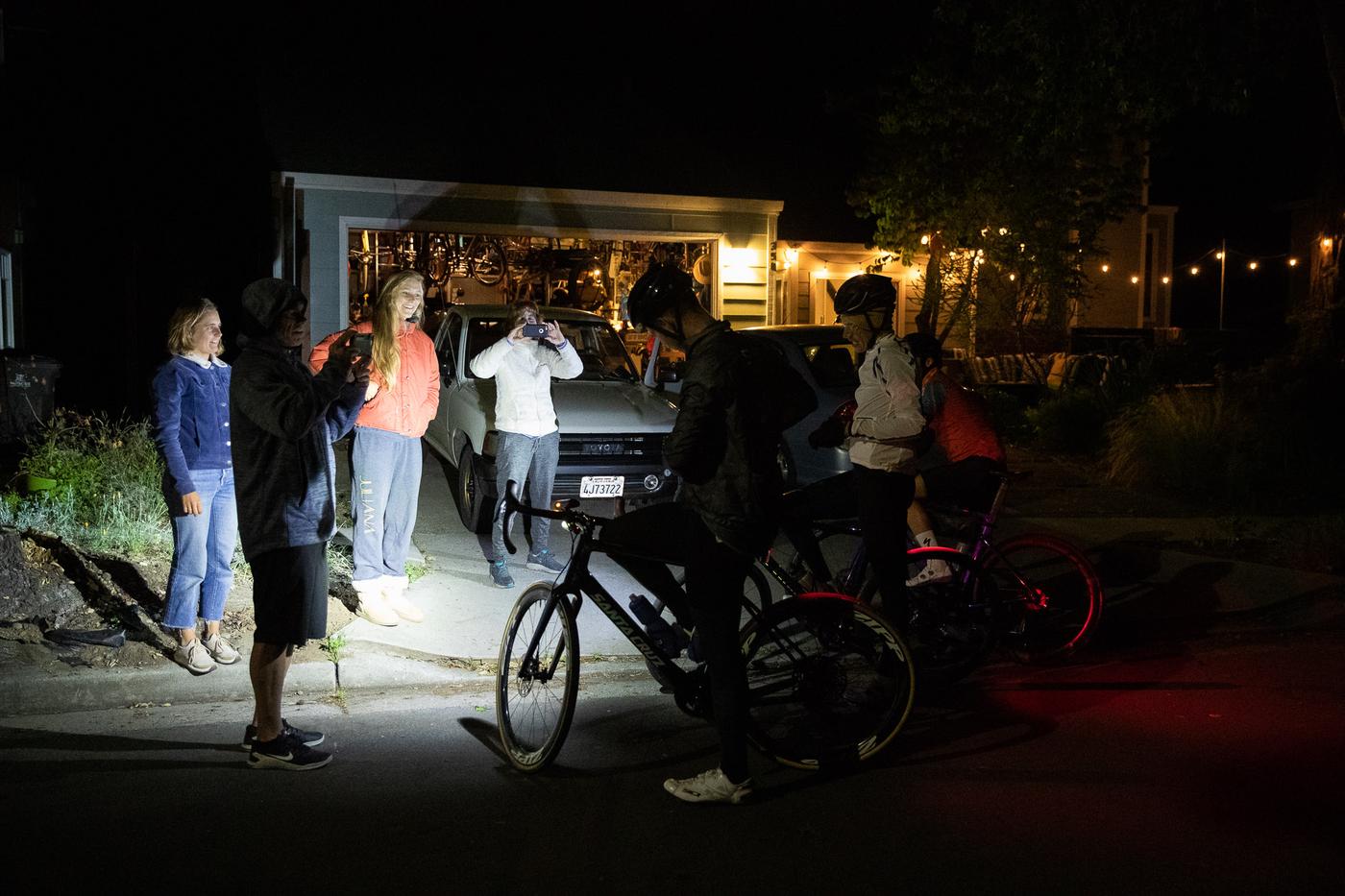 Although the ride is over, the movement is still happening. While Tobin and Dillon’s legs are still recovering, for the next week or so, their GoFundMe page will be live and accepting donations. (You can donate ​HERE​) We all have our strengths, and each of us are individually responsible to contribute in our own unique way. No matter how bold or timid the action, it all counts.

In the end I asked them both whether or not they would do this again…
Tobin: I need some time to forget how hard it was. I’m not sure I would want to do as much climbing as we did again. You could 100% make a way cooler 214 mile route, but our goal for the day was to get over 30,000’ vert. So the short answer is yes, just lemme catch my breath before we go again, cool?

Dillon: Ha, honestly I would. Especially because we were able to raise so much money for two amazing causes. I’d like to pick some sort of crazy ride once a year to do a fundraiser for…but maybe with less climbing next time.