The Henry Mountains of southern Utah have fascinated me ever since one of my geology professors in graduate school eloquently described their unique setting and their unlikely stature in the field of geomorphology. As a student, I found myself eagerly diving into a century-old geologic report to learn more, and then as a professor, I found myself taking my own students to the area to experience its grandeur in person. But a deeper understanding of the landscape could only come from moving through it for days on end. I finally had the opportunity to make that happen in late November with the company of my friend Chase Edwards – nine chilly days, 350 miles of pedaling, climbing six range’s most prominent peaks, and endless awe. 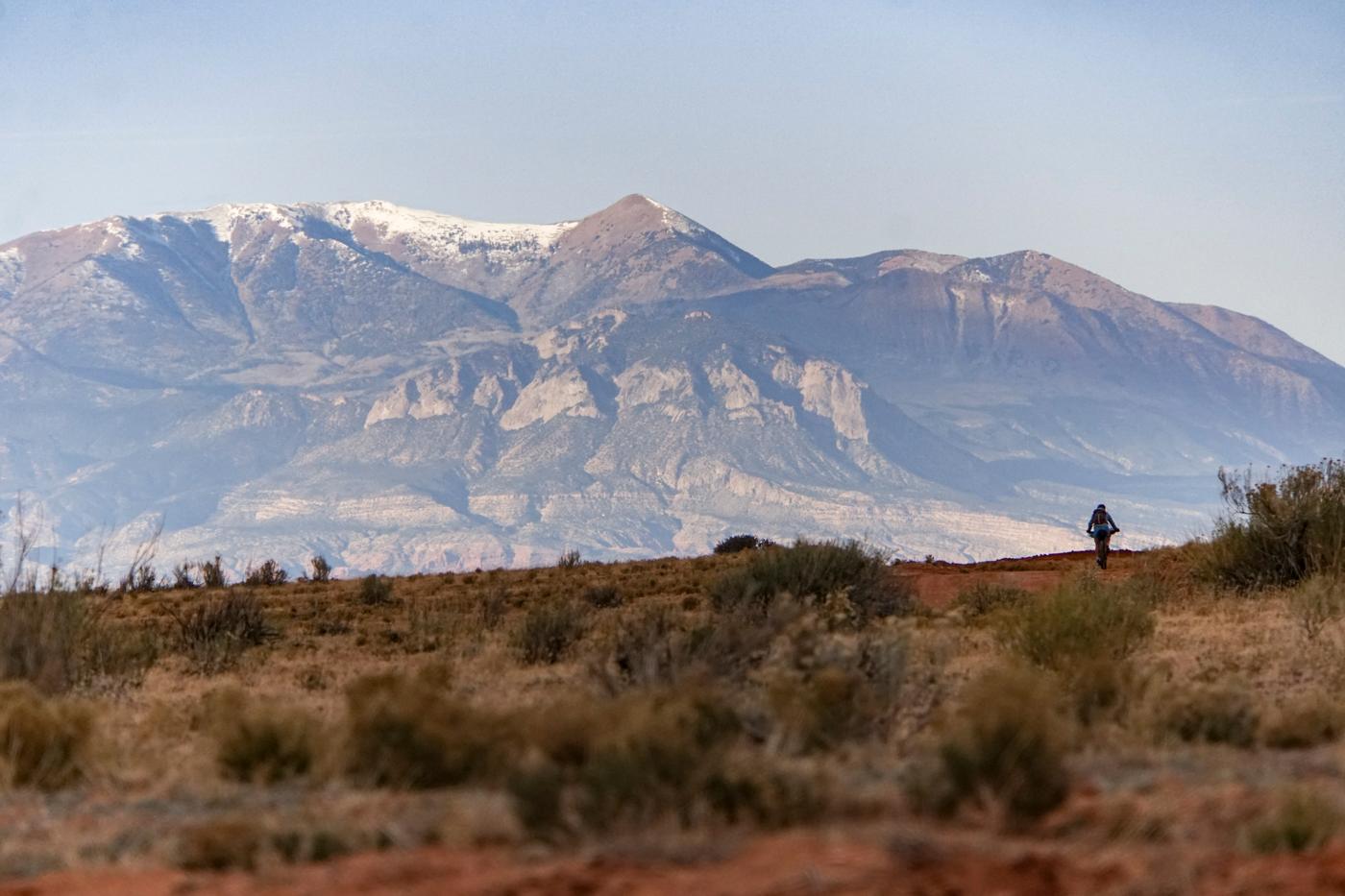 In 1875, geologist Grove Karl Gilbert was assigned by Professor John Wesley Powell to investigate and map the geology of the Henry Mountains in what is now southeastern Utah. Until 1869, the Henrys, from a colonial perspective, stood as one of the last unnamed and unmapped ranges in what would become the contiguous United States. In reality, these mountains and surrounding region are the homelands of Southern Paiute and Ute tribes, as well as Navajo, Hopi, and Pueblo groups. 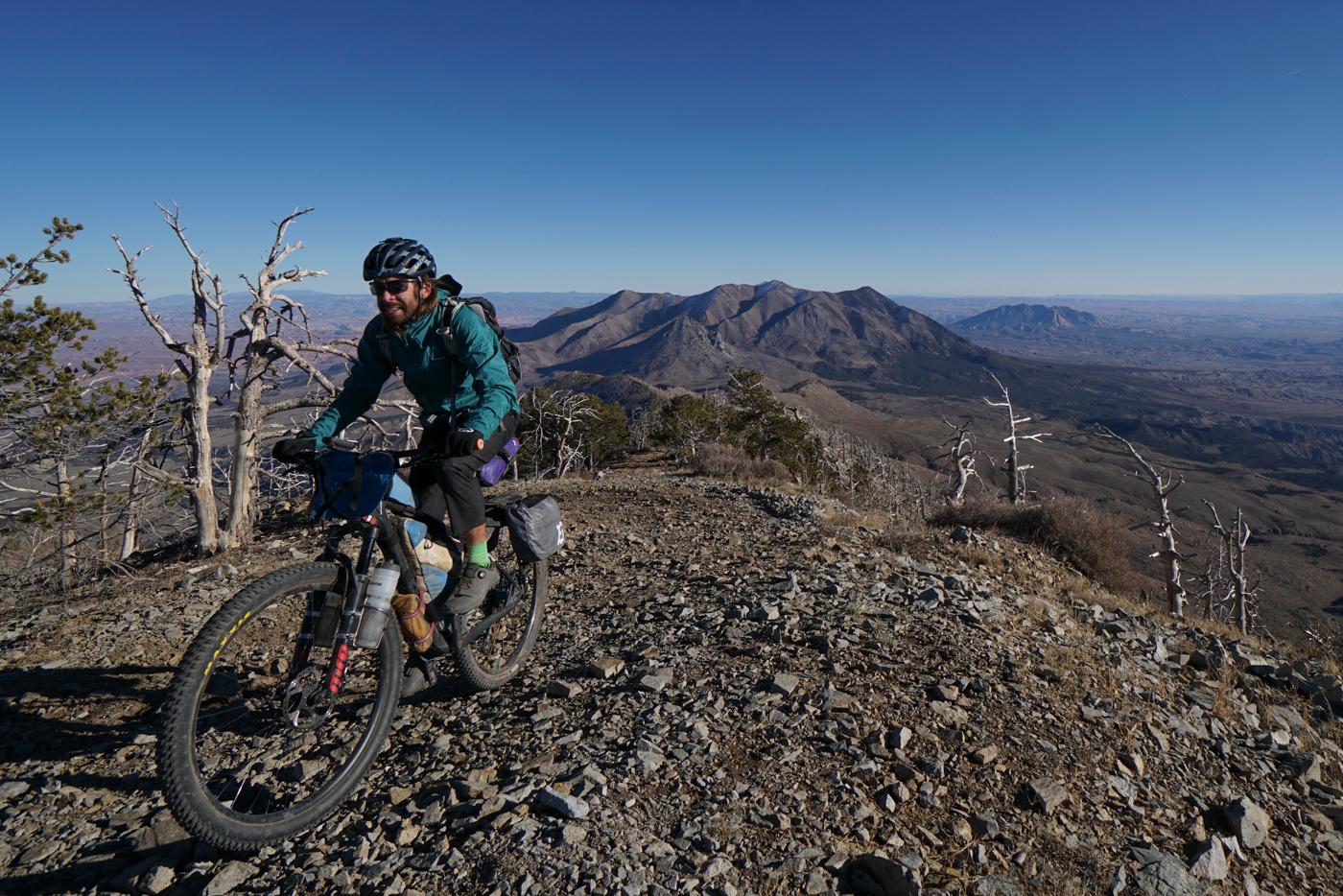 The five prominent peaks of the Henrys each stand alone, separated by low, broad passes. These peaks rise as much as 7,000′ above the San Rafael Desert to the northeast, and the southern two craggy peaks teeter on the brink of the Colorado River canyon with its waters nearly a vertical mile below the peak (this canyon was eventually flooded by Lake Powell but is now dry again as lake levels have declined dramatically due to the changing climate). 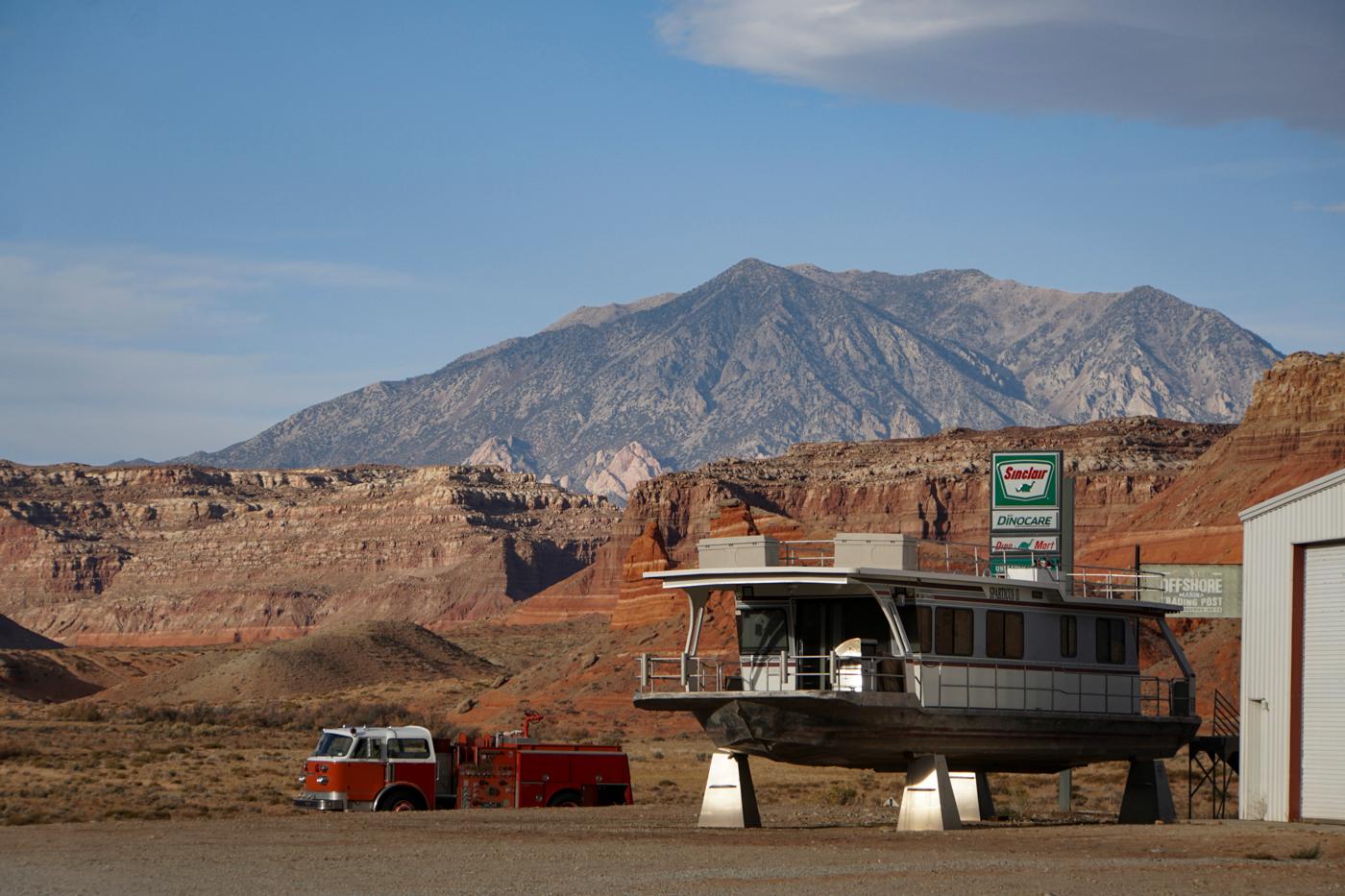 Gilbert and his party spent two summers in the area, studying the evidence of peculiar uplift and magmatic activity among these mountains that stand as islands amid the sea of sandstone that is so much of the Colorado Plateau. The hypotheses laid forth by Gilbert related to hillslope processes and Plateau geology were well ahead of their time, eventually being rediscovered by U.S. geomorphologists a full century later who were re-asking many of the same questions as had Gilbert. Today, the early studies of Gilbert have become mandatory reading for geomorphology graduate students, and it was in graduate seminars that I first grew more curious about the Henrys. 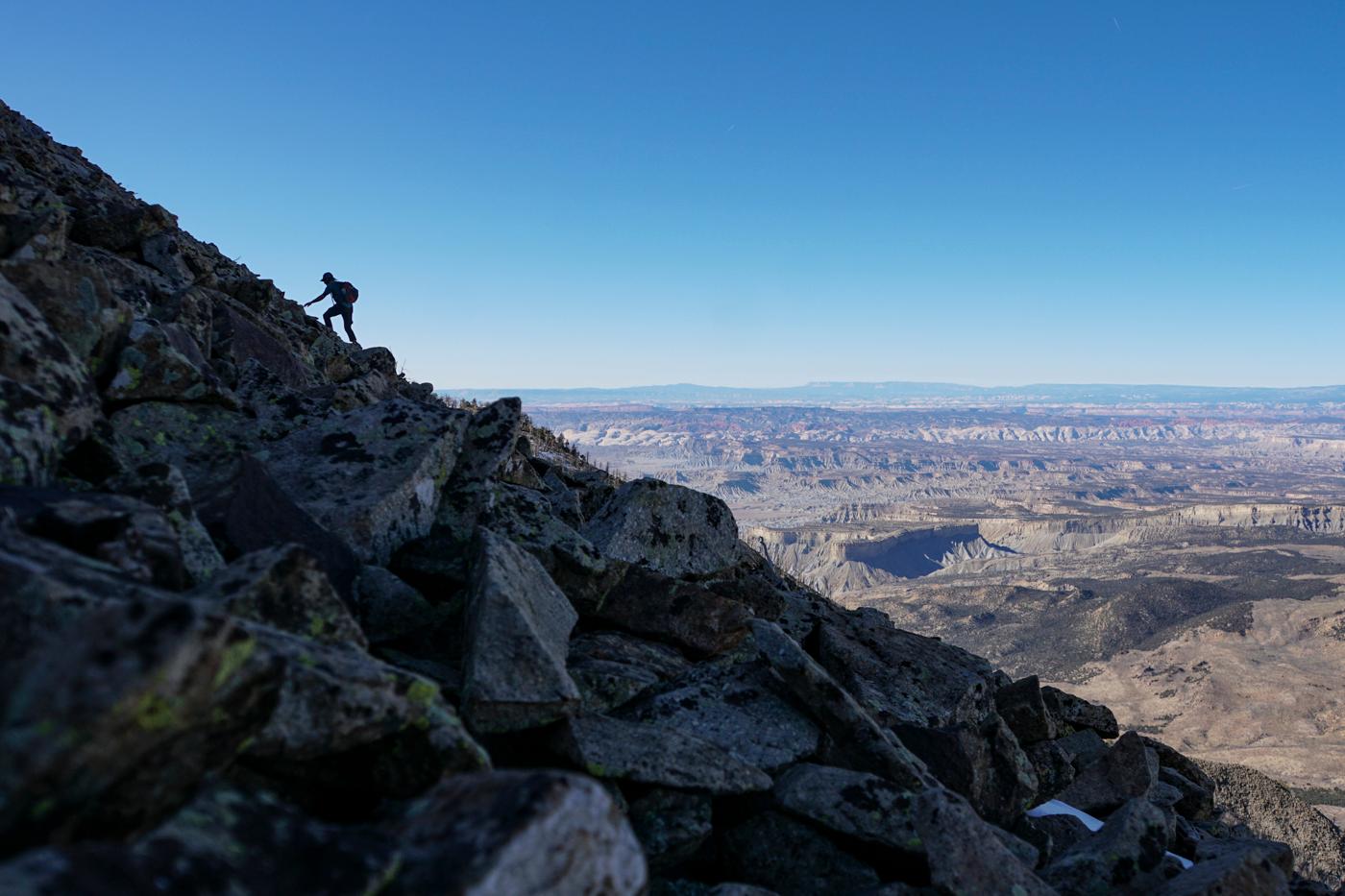 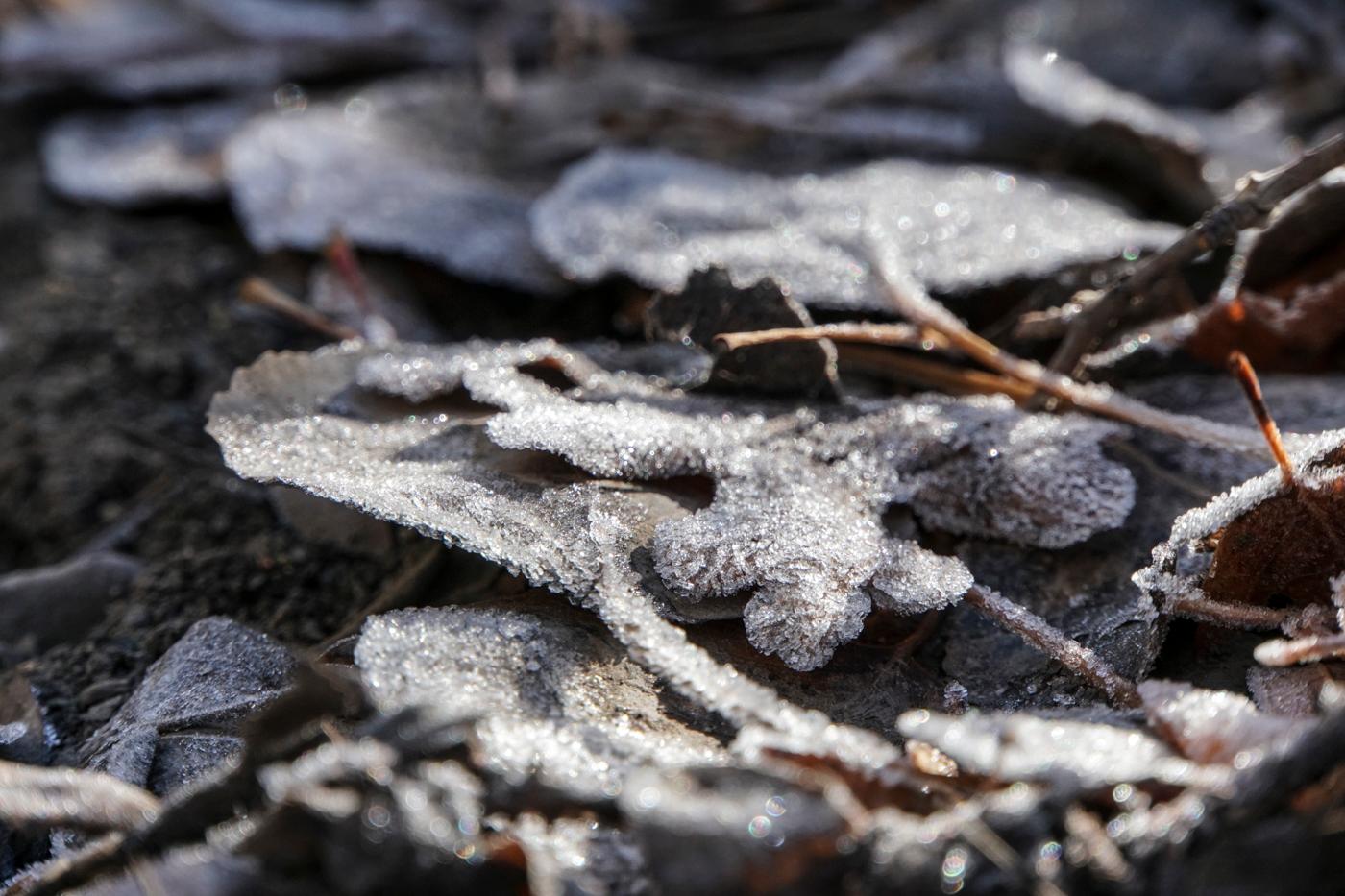 Years later, I was able to take my own geomorphology students on field trips to the region, but a deeper understanding of the landscape could only come from moving through it for days on end as Gilbert had done so many decades before, climbing to the top of each peak, peering into the gorges and narrow canyons that emanate from the mountains, and traversing the surrounding plateaus that gracefully tilt away from the uplifts. It was through that desire that the vision for this trip originated. 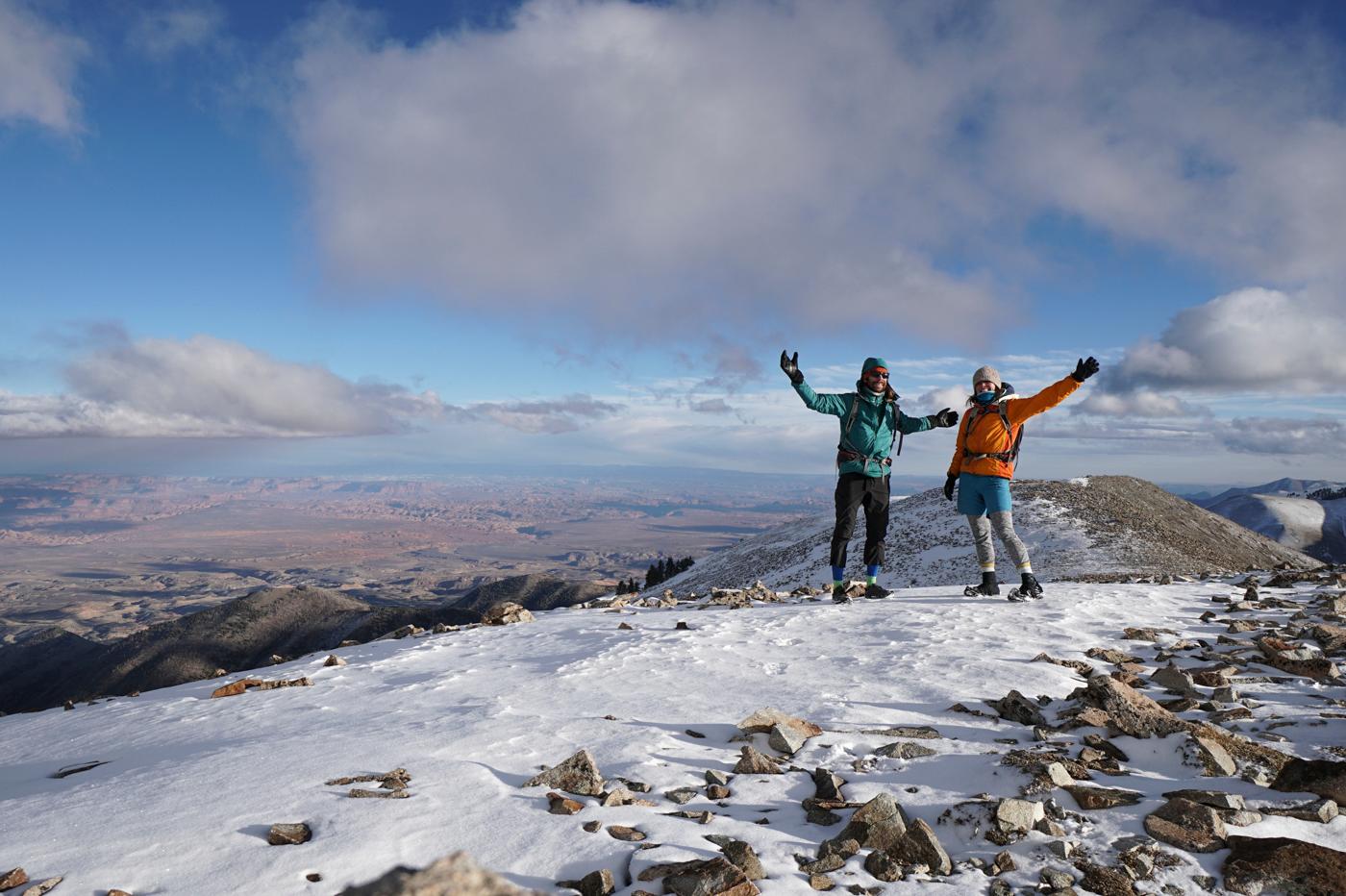 Over nine chilly days in late November, my friend Chase Edwards and I pedaled from near Hite, through the Maze District of Canyonlands National Park, across the San Rafael Desert, and up into the Henrys. Along the way, we summitted the 6 most prominent peaks in the range, some on trail and some via steep bushwhacks and talus scrambles. 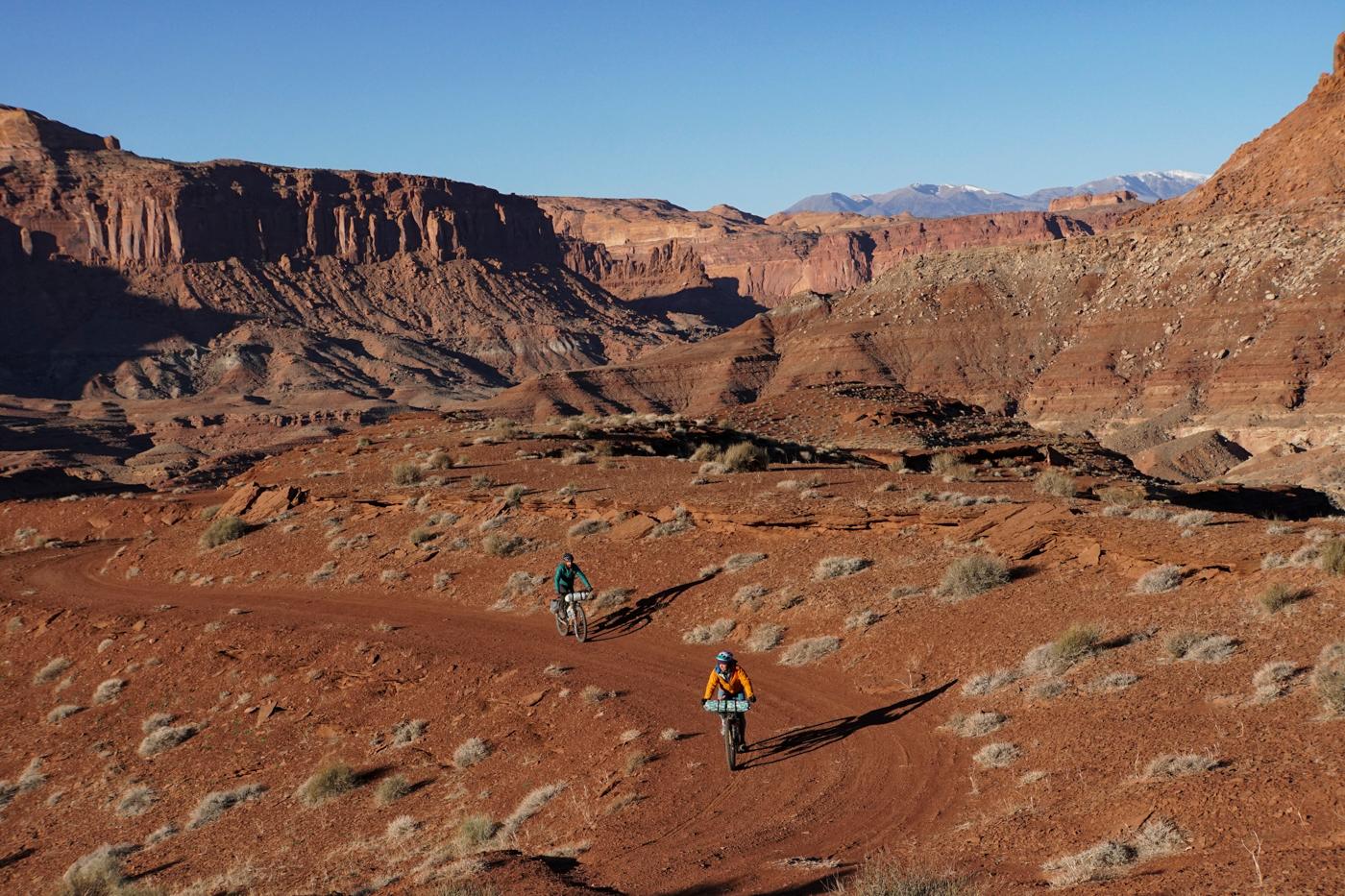 We added extra miles and a couple extra days to the planned loop to wander farther southwest across the gray and yellow shales of the Tununk Plateau to Bullfrog Canyon and also to visit the depths of the Dirty Devil Canyon en route back to our starting point. 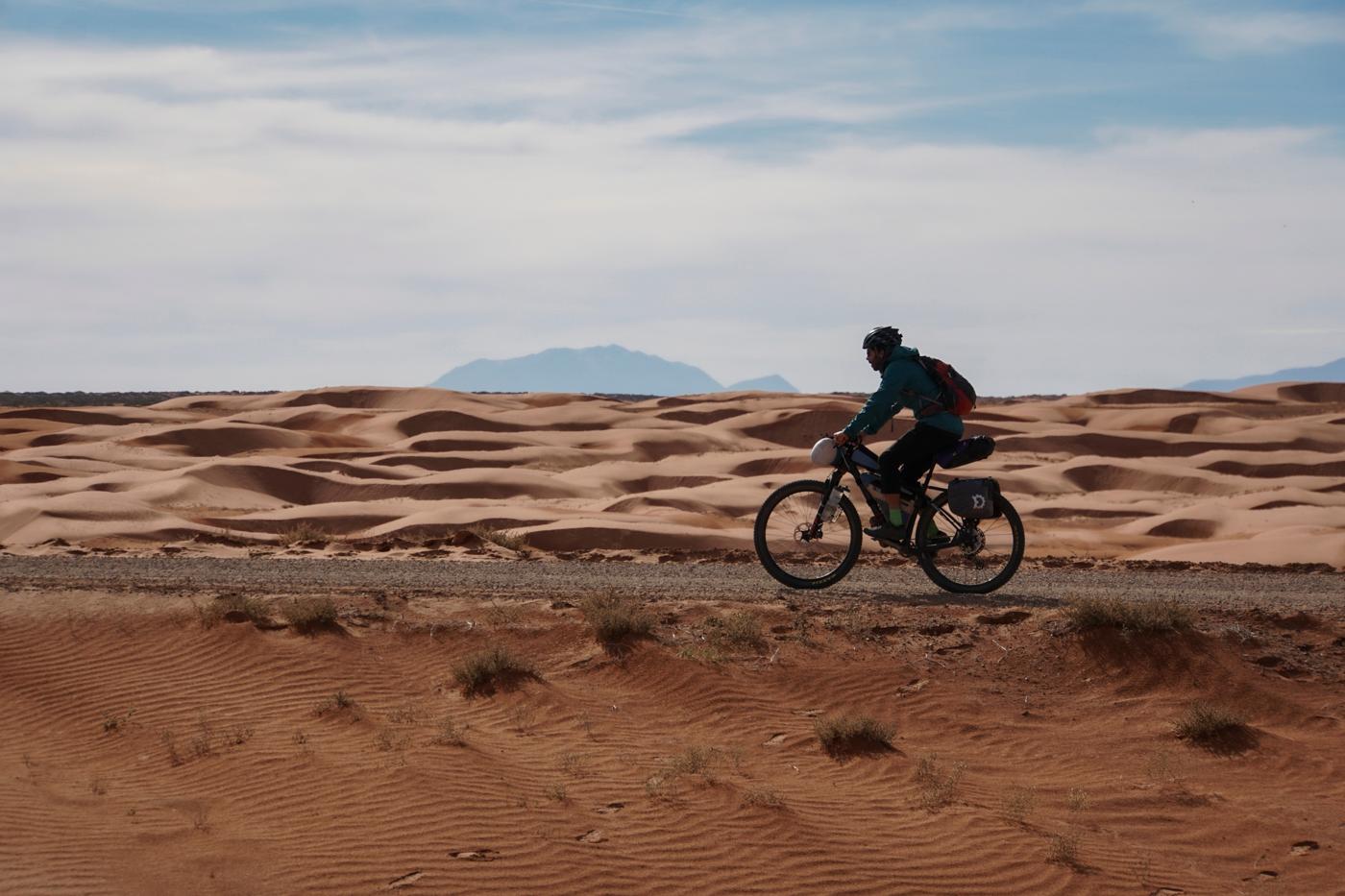 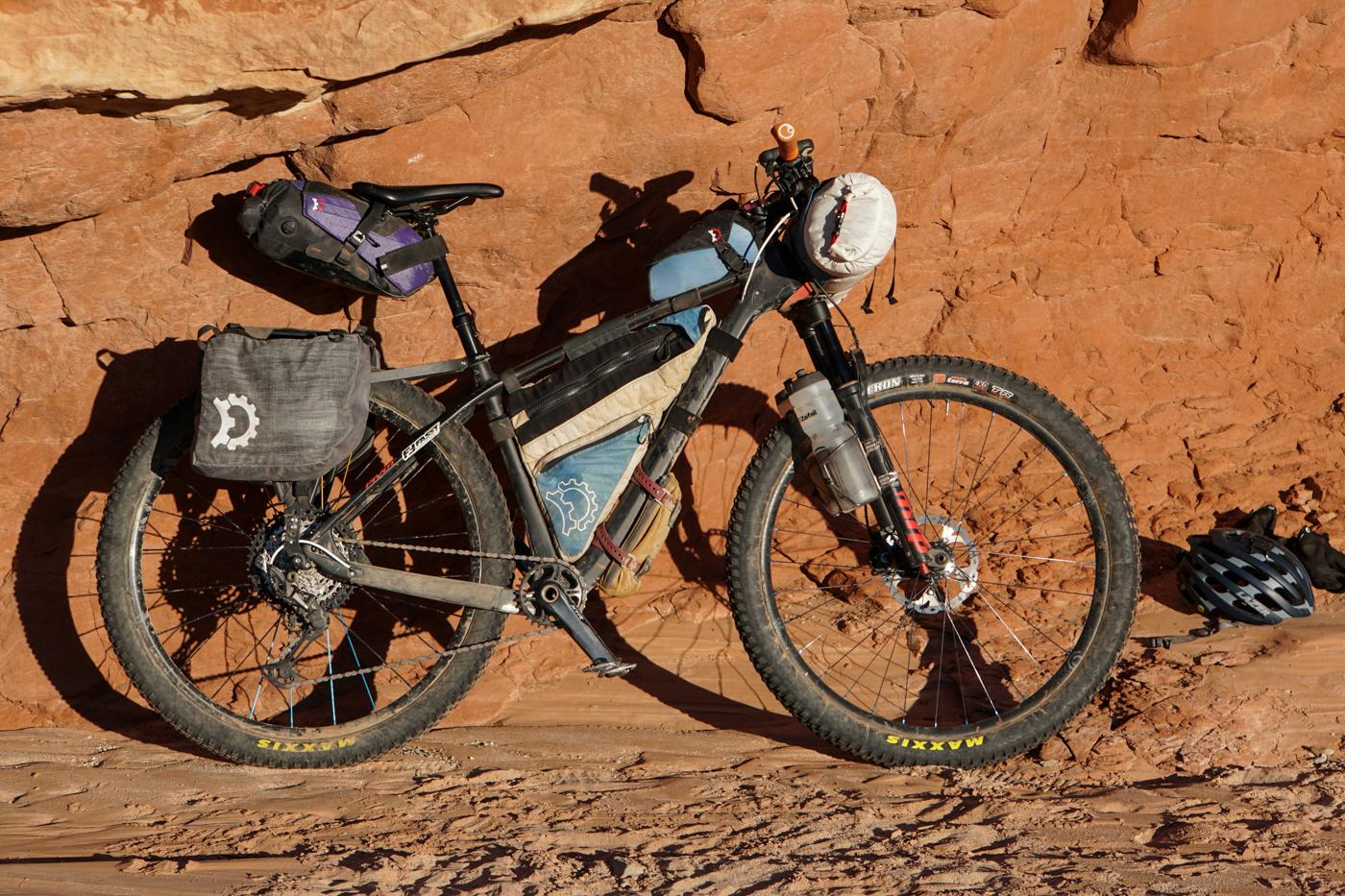 And for every single mile we pedaled and hiked, we were enveloped by the same naked, exposed, and often deformed rock layers and stunning landforms that Gilbert had marveled at some 150 years earlier. There’s so much more to share about this landscape, but photos can convey more of the awe than can my words. 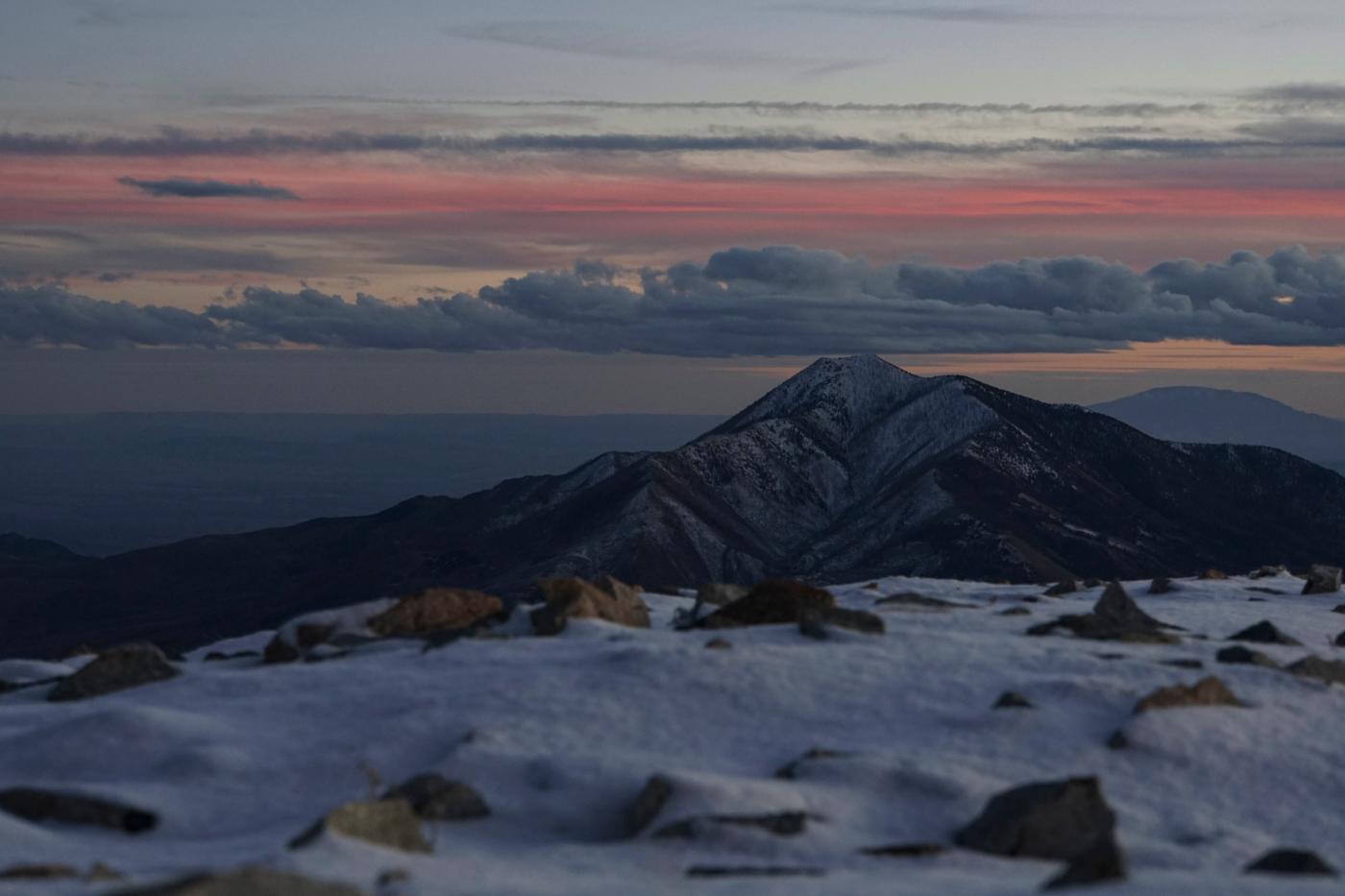 For anyone curious about the route we traveled or for more of a geographic orientation, check out the map below or visit the Backcountry Bike Challenge.