Washboard roads, rocky doubletrack, creosote, cacti, centipedes, tarantulas, and vistas for miles. The Monumental Loop provides it all in a healthy mix, featuring the Organ Mountains-Desert Peaks National Monument, BLM, and state lands surrounding the town of Las Cruces, New Mexico. With the mighty Organ Mountains looming in the background, it’s hard to imagine a better touring or bikepacking route in Southern New Mexico. When you add in the delicious food on the route, you’ve got yourself a winning combination. To help celebrate this monumental achievement (tee hee), Matt Mason, co-founder of the Loop, throws a grand depart each year dubbed the Dangerbird which took a brief hiatus last year due to the Pandemic. With Covid protocols in place and our numbers remaining slightly elevated in New Mexico, Matt made sure the entire weekend’s events took place outdoors, so I felt safe to head down to experience this gem of the Chihuahuan Desert… 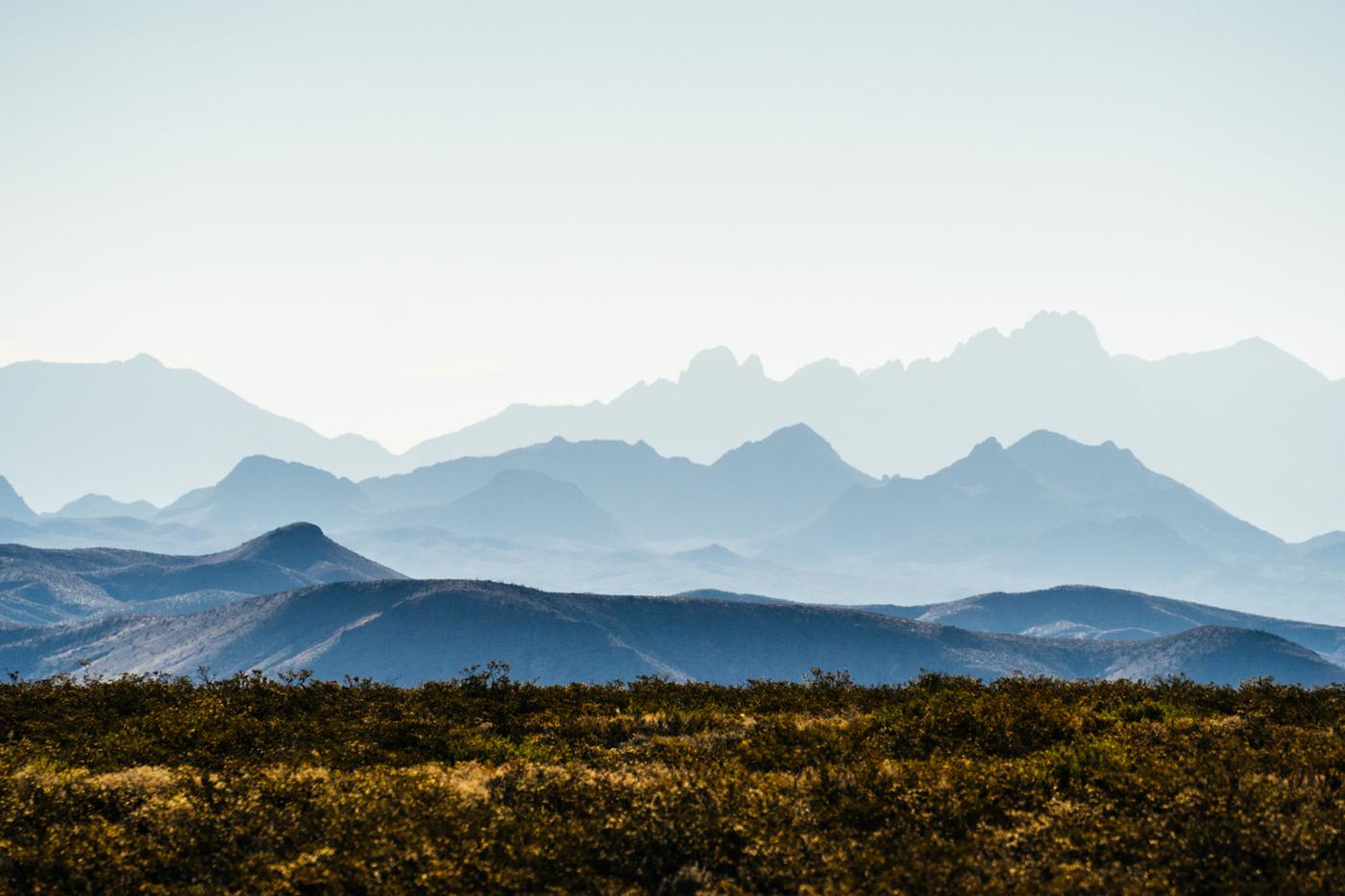 Established on May 21, 2014, by Presidential Proclamation under the Obama Administration, the Organ Mountains-Desert Peaks National Monument covers both low-lying creosote scrubland all the way to the Organ Mountain’s 9,000′ Ponderosa pine-covered peaks. This Monument includes the Potrillo Mountains, Robledo Mountains, Sierra de las Uvas, and Doña Ana Mountains. While many miles are enveloped by Wilderness, there are plenty of roads, byways, doubletrack, and trails open to cycling. The Monumental Loop offers up both a physical and visual tour of these majestic mountain ranges. 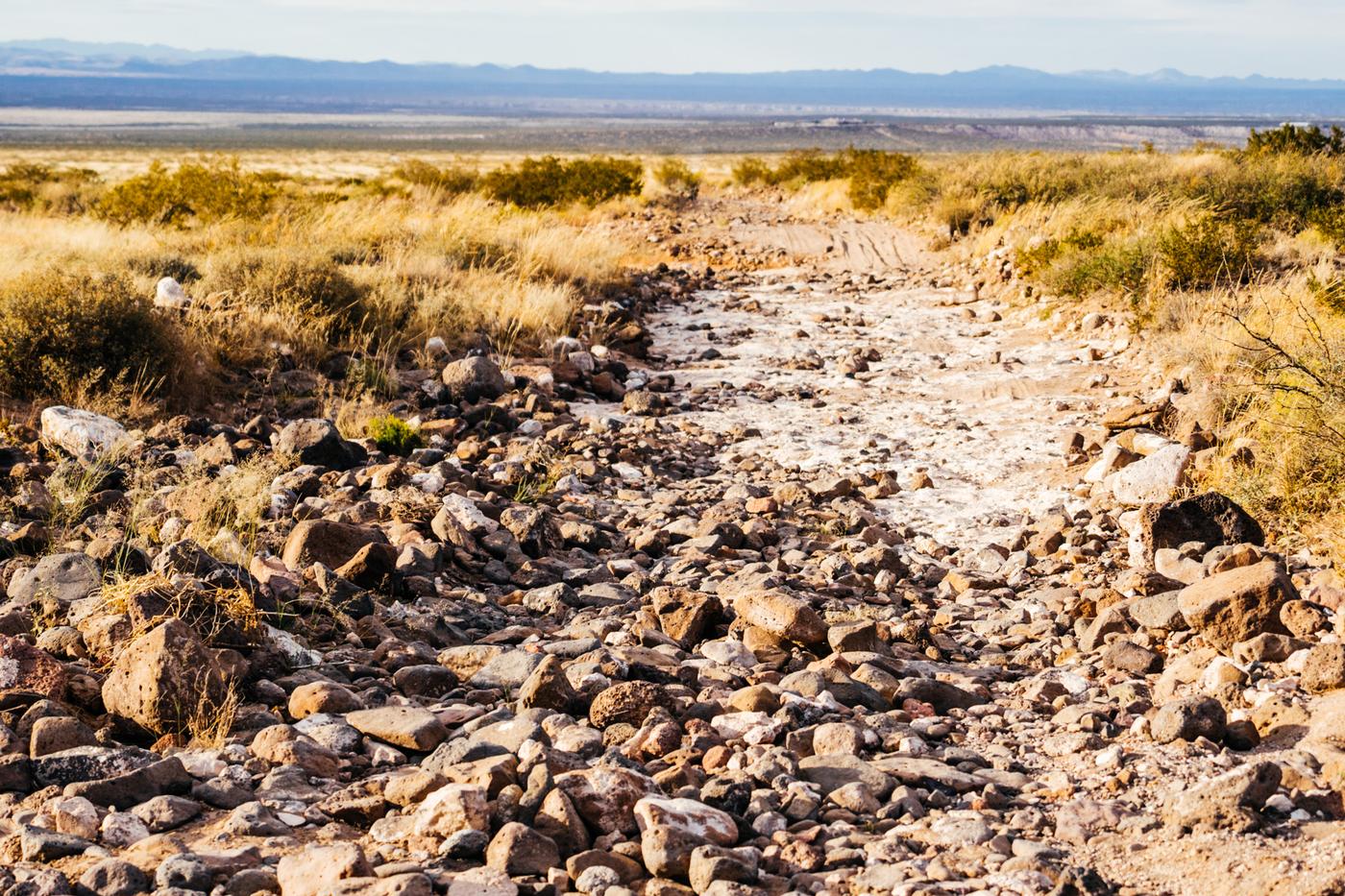 The Chihuahuan Desert abuts the mighty Sonoran with the tip of this vast desert primarily residing in New Mexico. A majority of its lands exist across the US/Mexico border deep into North-Central Mexico. The Chihuahuan Desert Ecoregion’s natural borders exist between two, towering mountain ranges: the Sierra Madre Oriental on the Eastern edge and the Sierra Madre Occidental along the Western.

The Chihuahuan Desert is one of the most vast (250,000 square miles) and diverse deserts in the American West and one of the most ecologically diverse arid regions in the world. Unlike the Mojave and Sonoran deserts, the Chihuahuan desert receives more summer rain during the monsoon season and has colder winters on average; two things to keep in mind while planning your trip! This landscape might appear to be void of life, yet the Chihuahuan Desert boasts as many as 3,500 plant species, including nearly a quarter of the world’s cactus species, is home to more than 170 species of amphibians and reptiles, with 18 of these being native specifically to this region, 110 fish species, 400 species of birds, and over 130 species of mammals, including the Mexican Gray Wolf. Geologically speaking, the region is made from limestone, igneous rock, and lots of calcareous soils. Due to its vast expanse across the US and Mexico, it’s difficult to characterize this varied landscape’s geological history but the Las Cruces area’s neighboring Organ peaks are an earmark to some 32 million years ago in which they formed in the middle of the Tertiary Period. Between 15-8 million years ago, the Rio Grande Rift created faulting and caused a massive uplift, forming the Organ Mountains. The mighty Rio Grande was fed by many surrounding canyons, alluvial fans, and arroyos, which carry the Organ Mountain silt all the way down to the Gulf of Mexico. 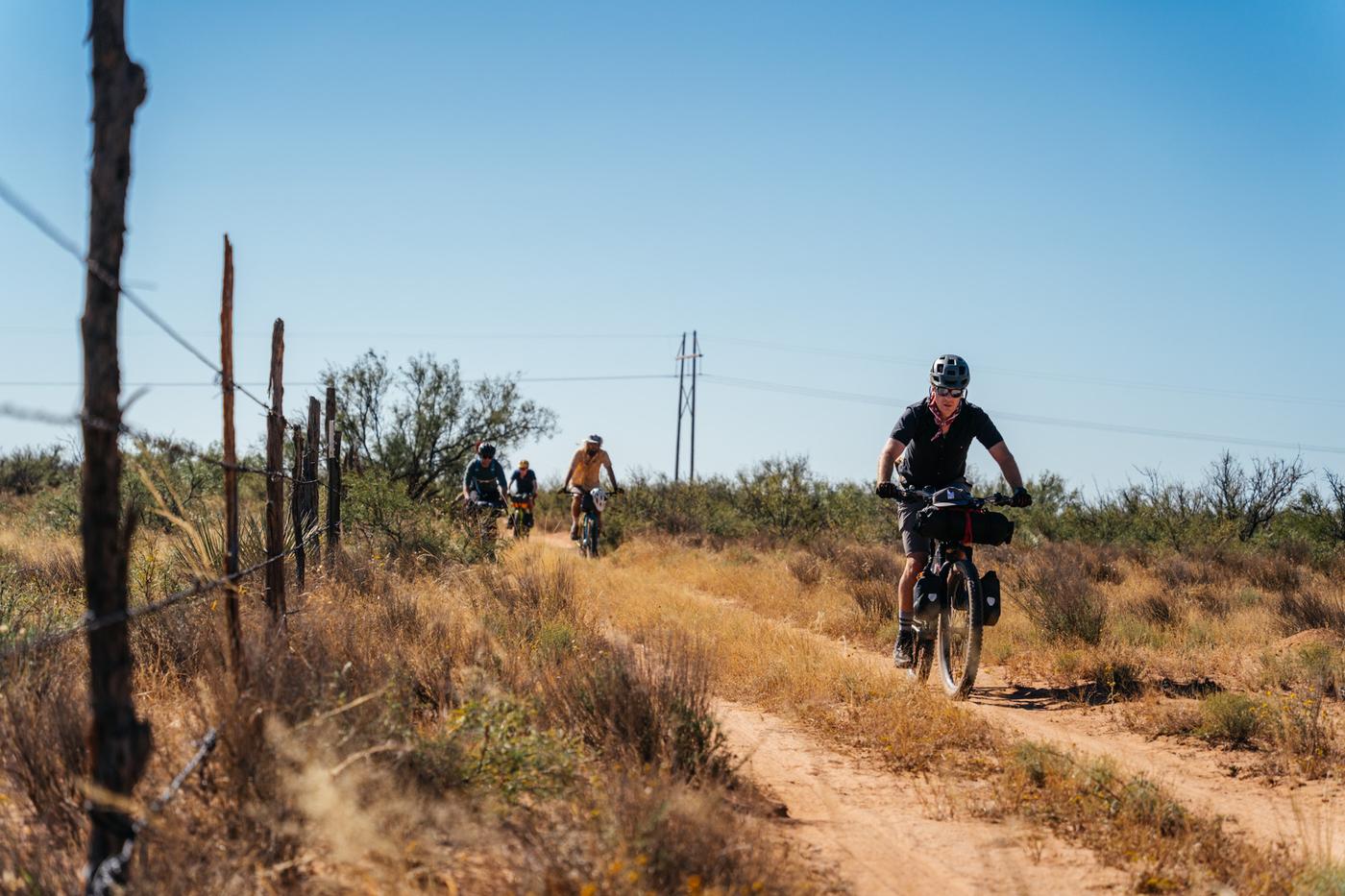 A few of the overgrown doubletrack stretches include portions of the Butterfield Overland Mail Route. The Butterfield Overland Mail was a preliminary means of delivery for the United States mail, operating from 1858 to 1861. As one might imagine, this short-lived route trailblazed across the desert southwest in a quickly-cut network of trails all the way across the United States. This dense network of trails began in two eastern US towns: Memphis, Tennessee, and St. Louis, Missouri, and made its way across the US to San Francisco, California. While most of the route has been engulfed by rapidly-growing cities, there are still remnants to be found in public lands across the West. When you ride the Northern section of the Monumental Loop, you’ll find yourself on this long-forgotten doubletrack. It was the morning of the Grand Depart. Both Matt and myself were exhausted from the previous day’s events. Matt has been working his ass off, along with the rest of the Monumental Loop board to help nourish the bikepacking and bicycle touring community of New Mexico. The board’s intent is to re-instate a sense of ownership over this community and to use local resources to better the experience of cyclists in both the Organ Mountains-Desert Peaks National Monument and its surrounding public lands. This is by no means an easy task, with many personalities in government agencies aligning with the best interest of local ranchers and cattle grazing. After a stressful few days, Matt was relieved to be able to pedal the route: a much-needed break from the bureaucratic red tape he’d been encountering. Meanwhile, I was feeling my own emotional load with our recent announcement of our partnership with The Pro’s Closet: all I’ve been living, breathing, and eating for the past five months have been the minutiae of the merger and the future plans for The Radavist. While I love the problem-solving aspect of these conversations, I really feel like my best ideas arise while out on the bike for a few days. Knowing all of this, Matt hatched a plan before the Grand Depart: our small group would ride the route clockwise, opposing the Dangerbird’s counter-clockwise direction. This would achieve a few things. First, it’d let us see and interact with the entirety of the field as they moved through the course. We’d catch the fastest racers first and then see the casual tourers on the second day. As a result of this routing, we’d tack on the hardest part of the northern loop within the first 55 miles. It would also let Matt experience his route in reverse, which he’d never done before, and it’d give us a more intimate experience of the weekend.

While I love group rides and meeting new people, my voice was already horse from talking all day on Friday and I was feeling socially exhausted. To add to it, local officials were on edge about the event, perhaps speaking to the public’s perception of mountain bikers. These officials stated their main concern is for the ranchers and their grazing cattle, even challenging the rights of cyclists to filter cattle trough and tank water. Save the West, end socialist ranching. In the end, the Monumental Loop board and local government agencies arrived at an understanding and will continue to work through these delicate topics.

With a big sigh of relief to be pedaling away from the red tape, our group split off during the Grand Depart, heading due north out of town, straight for White Gap. 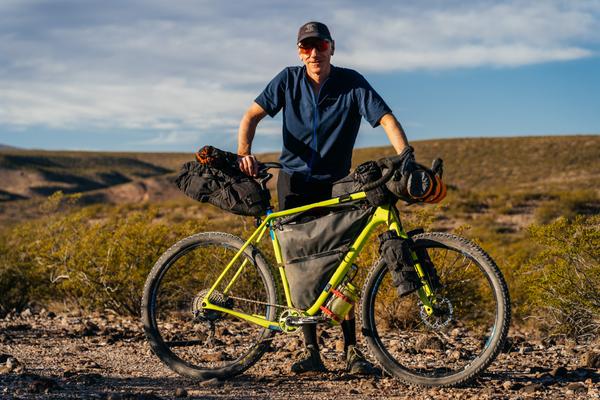 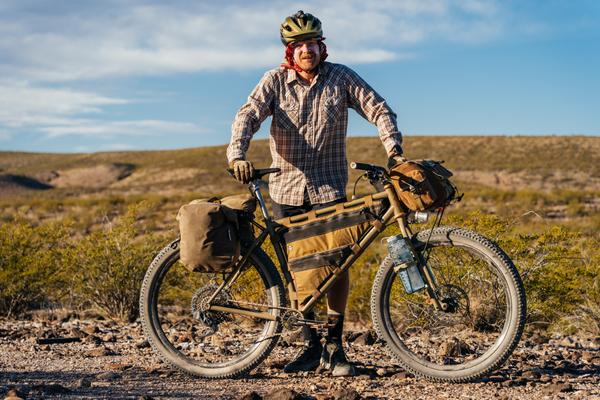 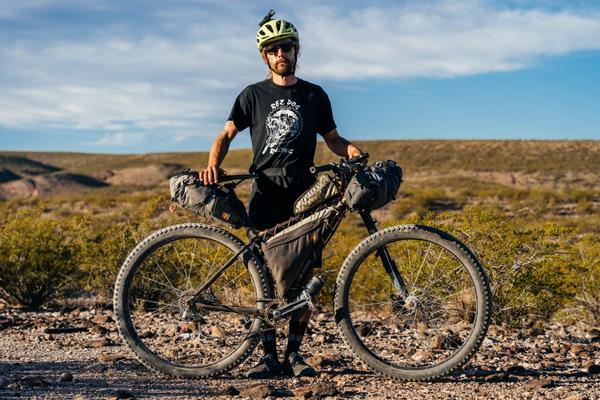 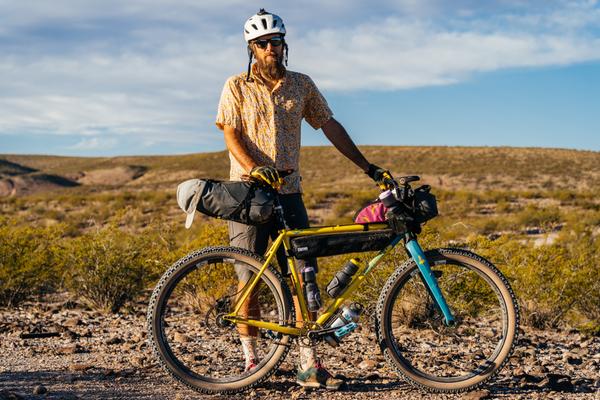 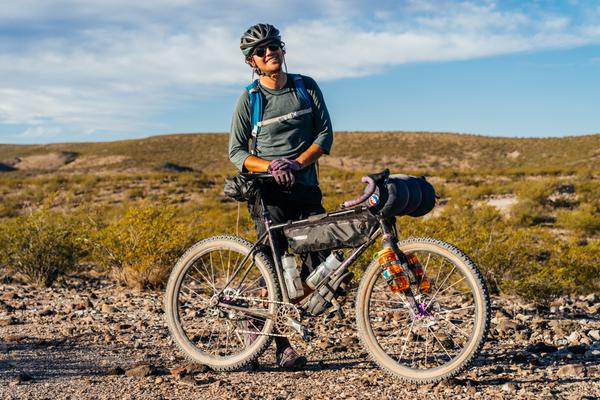 Joining Matt and myself on this ride was a local named Phil, Dillen from Baphomet Bicycles, Cjell from Moné Bikes, and Josh Weinberg. Our plan was to tackle 75 miles on the first day, leaving a chill 55 miles to complete the northern loop, with the option to cut out the entirety of the Doña Ana peaks if time was an issue.

I felt a great amount of reverence for Matt on this trip. He went from helping organize the NM Bikepacking Summit with the Monumental Loop Board: Collette Marie, Pablo from Outdoor Adventures, and Angelica Rubio from the NM House, to pedaling out onto the very route that holds so much meaning to him and countless other bikepackers and cyclotourists in the Southwest. 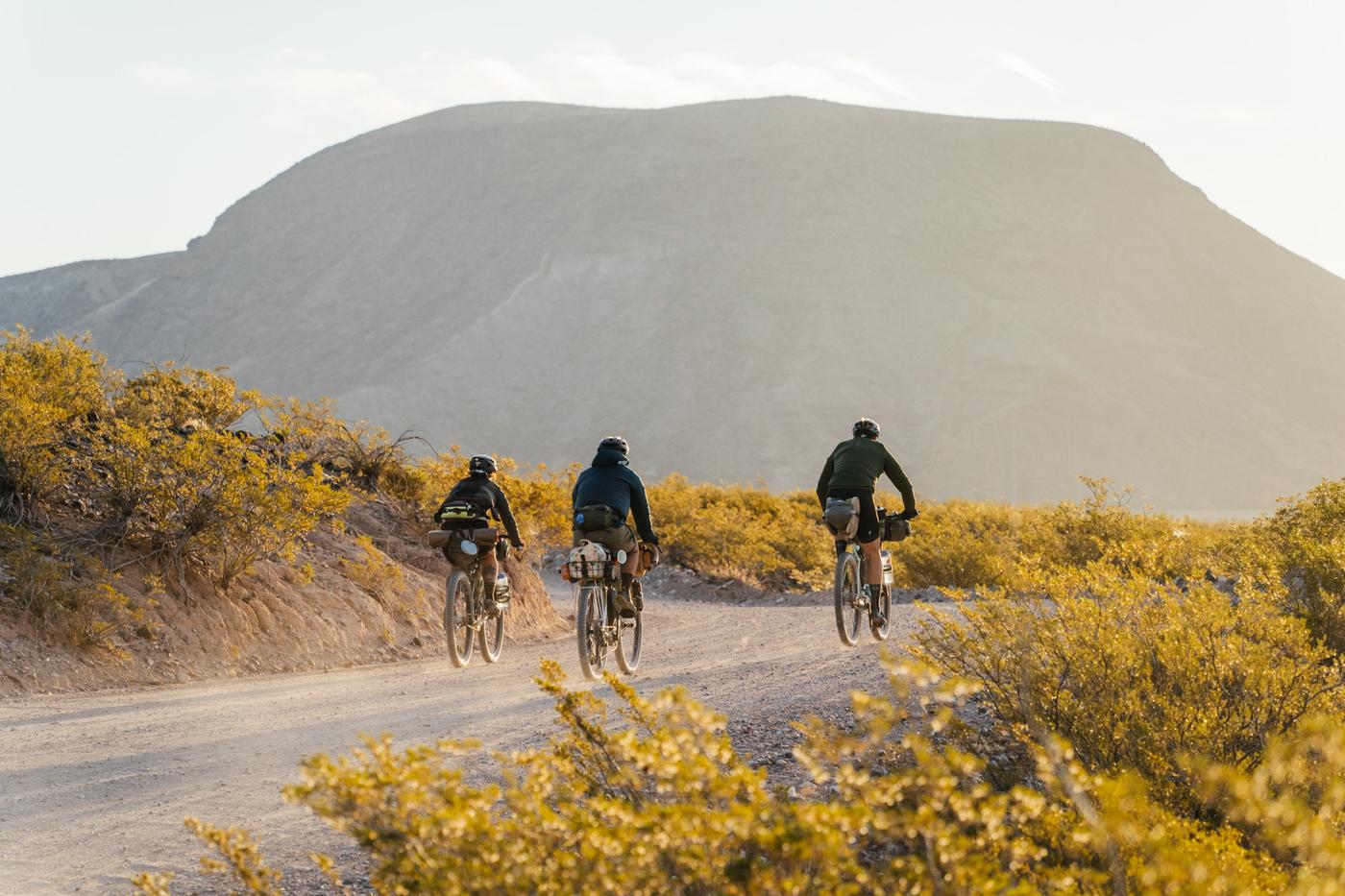 We spoke a lot about what it means to foster community and how an event like the NM Bikepacking Summit, along with the Monumental Loop, can usher in a new wave of adventurous, and respectful, tourists to the area. Going back and forth about the etymology of the surrounding landscape and its designations, to various tidbits of knowledge surrounding the flora and fauna of the area, while cracking jokes with the group, the air began to lighten and we all pushed forward on our course. Then the wind came.

Usually, I try to avoid looking at the weather the morning of a departure. At that point, there’s nothing you can really do except toss in the rainfly or a rain jacket but the morning of, I took a look at Wunderground and saw we were in for some serious wind. I don’t mind wind. It’s the tamper to fast-paced riding. The more you push into the wind, the less efficient you get. My pace is usually on the spinnier, slower side of things, but with a group of strong riders, two of which on singlespeeds, I knew the wind wouldn’t be slowing us down. Four hours later and we were staring down the abyss of White Gap. A 10-mile descent through steep and rocky terrain taunted us with a howling, unforgiving bellow from the north. The Spanish Bayonet Yuccas bowed in submission as dust pelted our exposed skin. We wondered when we’d see the other riders on the course and began to descend into the alluvium. 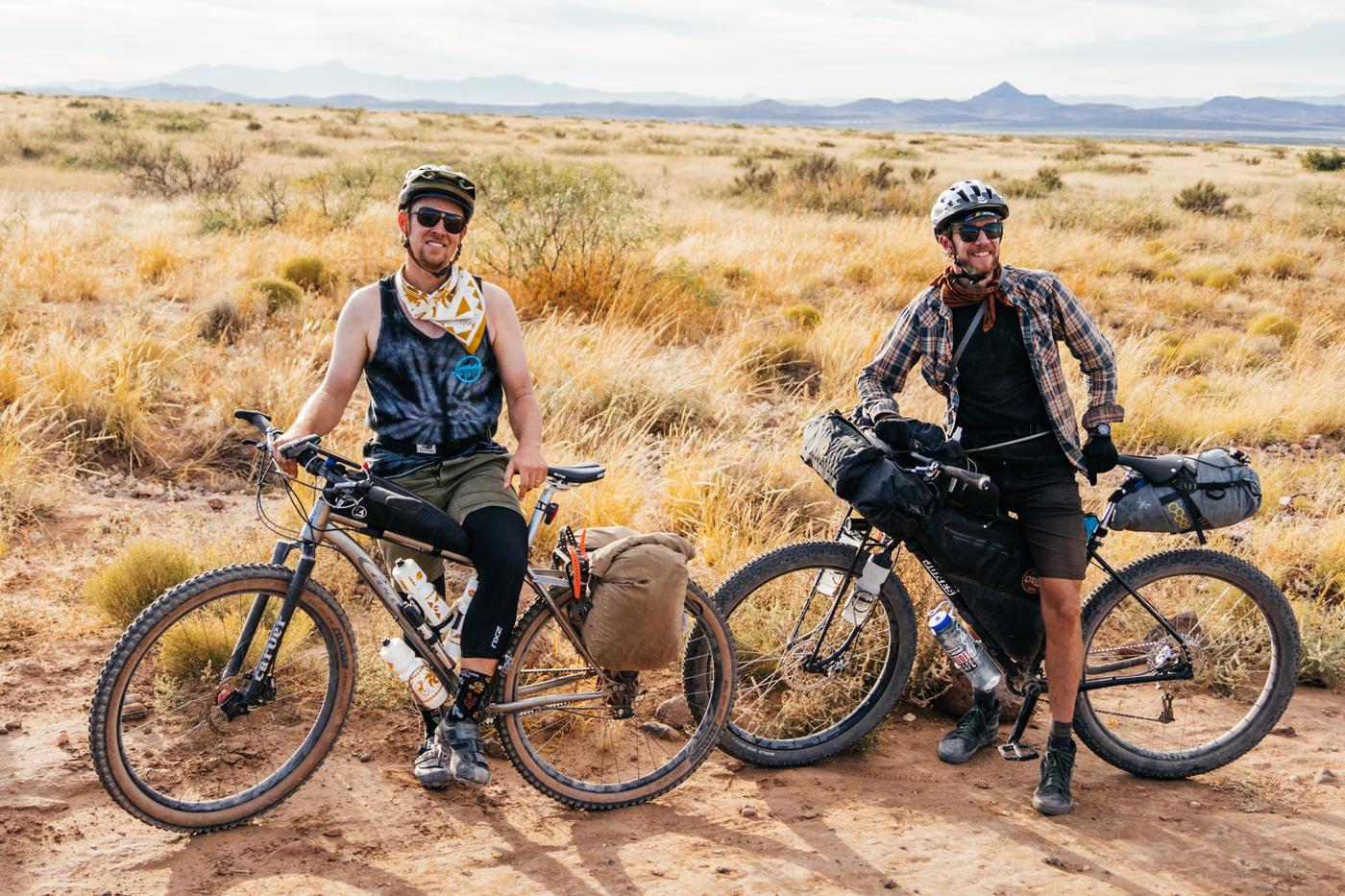 It wasn’t too long until we encountered the leaders of the pack. We passed some familiar faces, like Eric and Rusty, local speedsters, as well as Bailey Newbrew who took the FKT on the entire Monumental Loop, finishing the entire 260 miles, 10k+ feet of elevation, in a whopping 30 hours, 20 minutes, and 49 seconds. 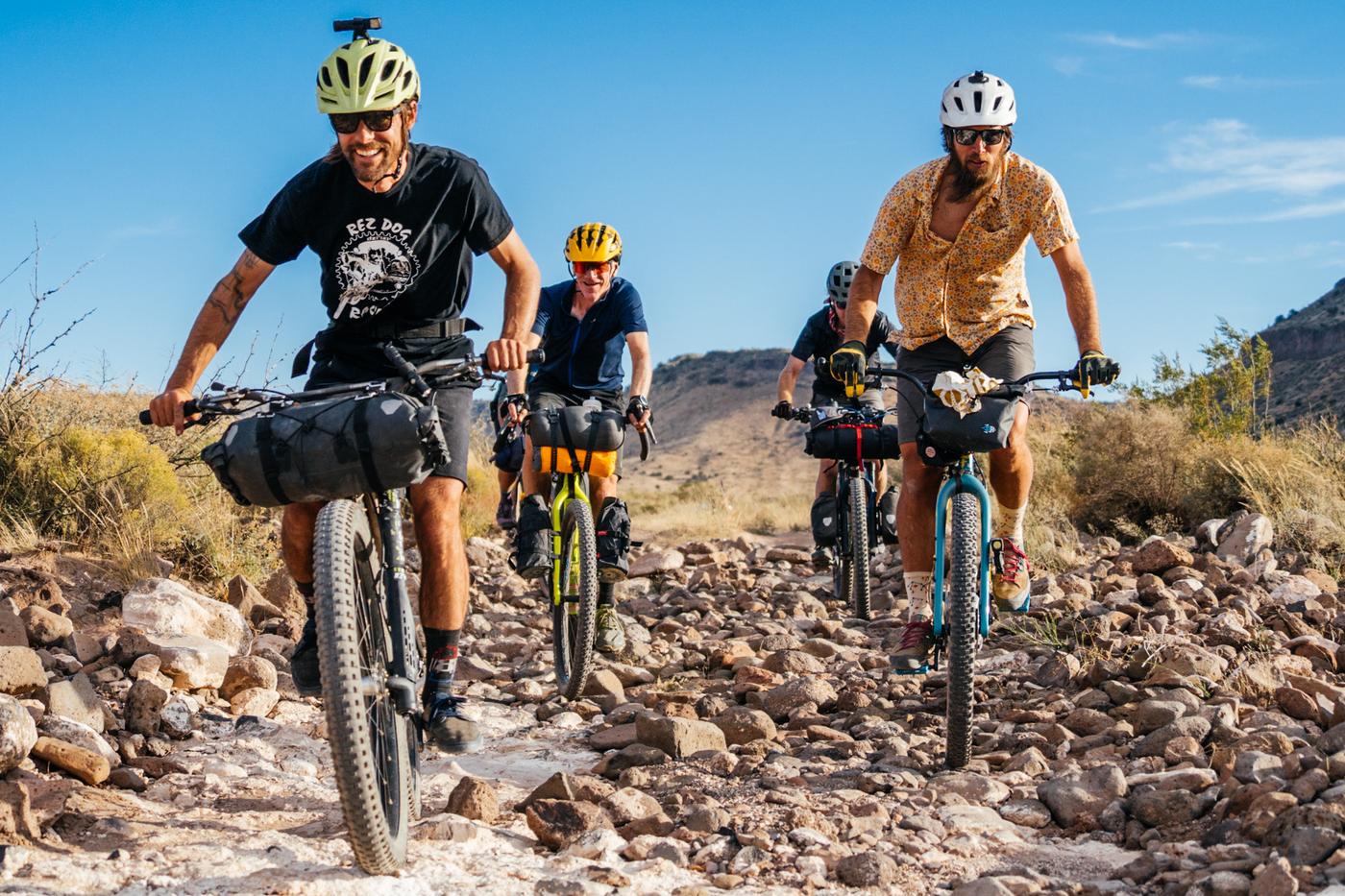 With the town of Hatch on our minds and time running against us, we set out an SOS to Bikes or Death podcaster Patrick to see if he’d scoop up some burgers from the world-famous Sparky’s Burgers. He did and upon our arrival, we sated our wind-blown bodies with green chile burgers and fries. A quick stop at the local gas station turned into an hour of socializing with other riders where were shared the stoke from the day’s events. We were still 20 miles from camp and were feeling spry after our refuel. I crammed snacks into my panniers and we rallied the troops. A gravel path along a levee neighboring the Rio Grande became a dusty paceline. With our lights set ablaze, we powered through to camp, arriving well after the sun had set behind the creosote-covered foothills. Coyotes sang us to sleep.

The next morning, we awoke to a beautiful sunrise and began to go over our supplies. We had all filled up with sufficient water and food, just enough fuel to make it to Radium Springs. While the terrain wasn’t as rugged as the day before, the roads were anything but kind. Lots of rolling hills, sandy arroyos, and rocky descents awaited and we were all falling into our stride. Cjell and I boogied down the rutted two-track, hooting and hollering at every turn. We’d regroup at the top of the climbs, exchange snacks, and plan out the rest of the day. I had to be back in Santa Fe Sunday night, so I said my goodbyes and split off into the wind vortex by myself, heading south back down to Las Cruces. As I was pedaling solo, I began to think about how wonderful it is to host a group ride/Grand Depart on a course like the Monumental Loop, and how significant it is to make something that people can enjoy any time the weather and climate permits. There are lots of races out there but few of those courses are ridden outside of their host weekends. The Monumental Loop is a catalystic achievement for Southern New Mexico. With a newly-formed board and the help of the Southern New Mexico Trail Alliance, with funding by the New Mexico Outdoor Recreation Division, we can only hope to see more connectivity across the great state of New Mexico.