A Preview of the Kromvojoj Event: Road Touring in Catalonia - Stronger than Vinegar

For me, riding a bike has always meant three things; experience, adventure, and escape. From childhood, it’s given me the opportunity to experience new, it’s given me the freedom to explore, to embark on adventures near and far, and it’s also given me a much-needed escape from my battles with mental health. Cycling has also introduced me to a community of amazing people and this for me is perhaps the greatest benefit of riding because they never fail to enrich the three reasons I love the bike. 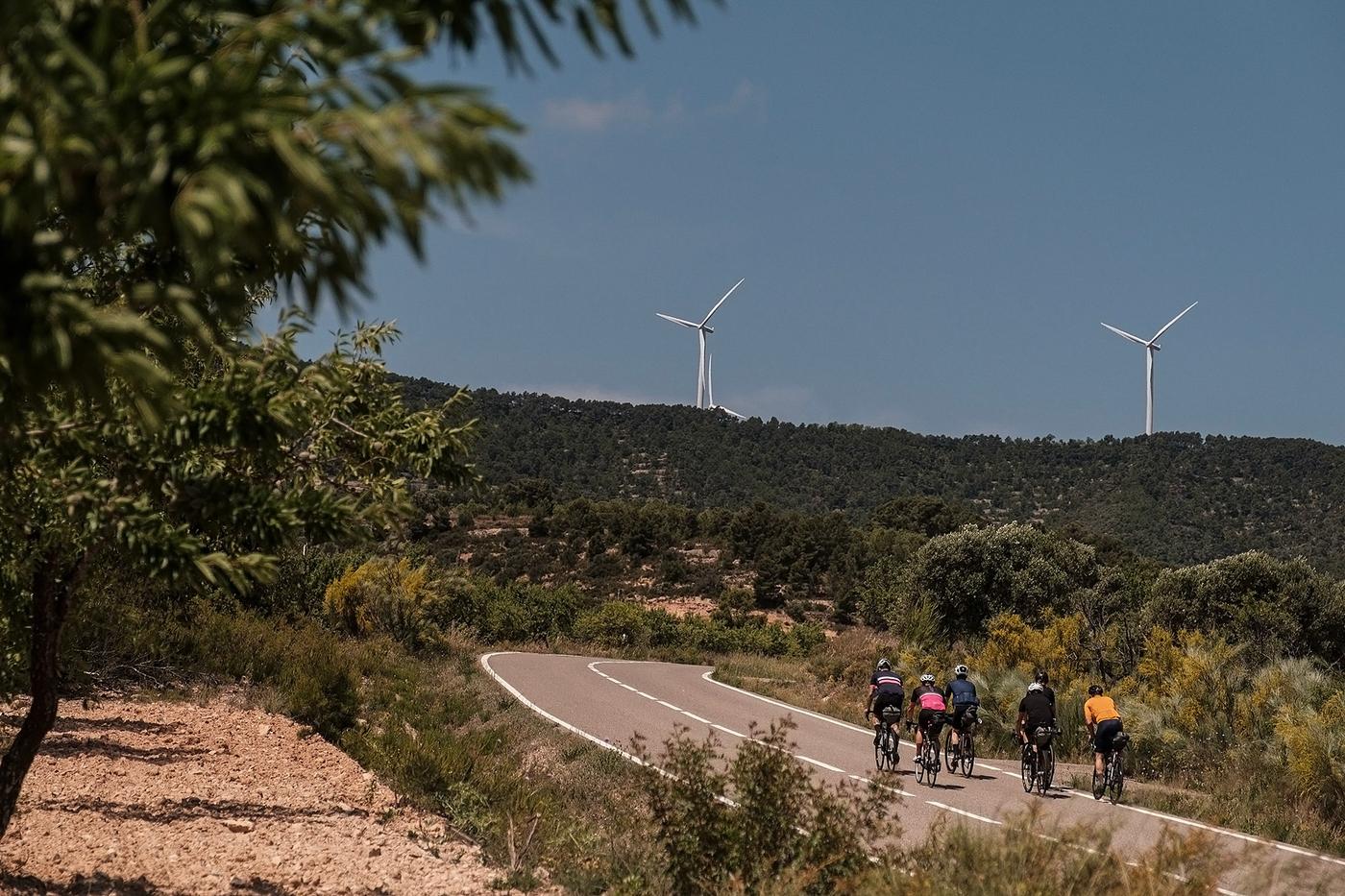 It’s May and I am en route to Catalonia with a friend and all rounds badass, Lucie Denis. We are to spend four days bikepacking in a remote part of the region and recce part of the route for a new cycling adventure – Kromvojoj. It’s the brainchild of my buddy Tomás Montes and a group of his close friends Joan, Uri, and Bernat. We know little about the event itself but Tomás assures us we’ll be in great company and the Parcours will be a treat. I trust him explicitly so with music blaring, Lucie and I make our way to race HQ. 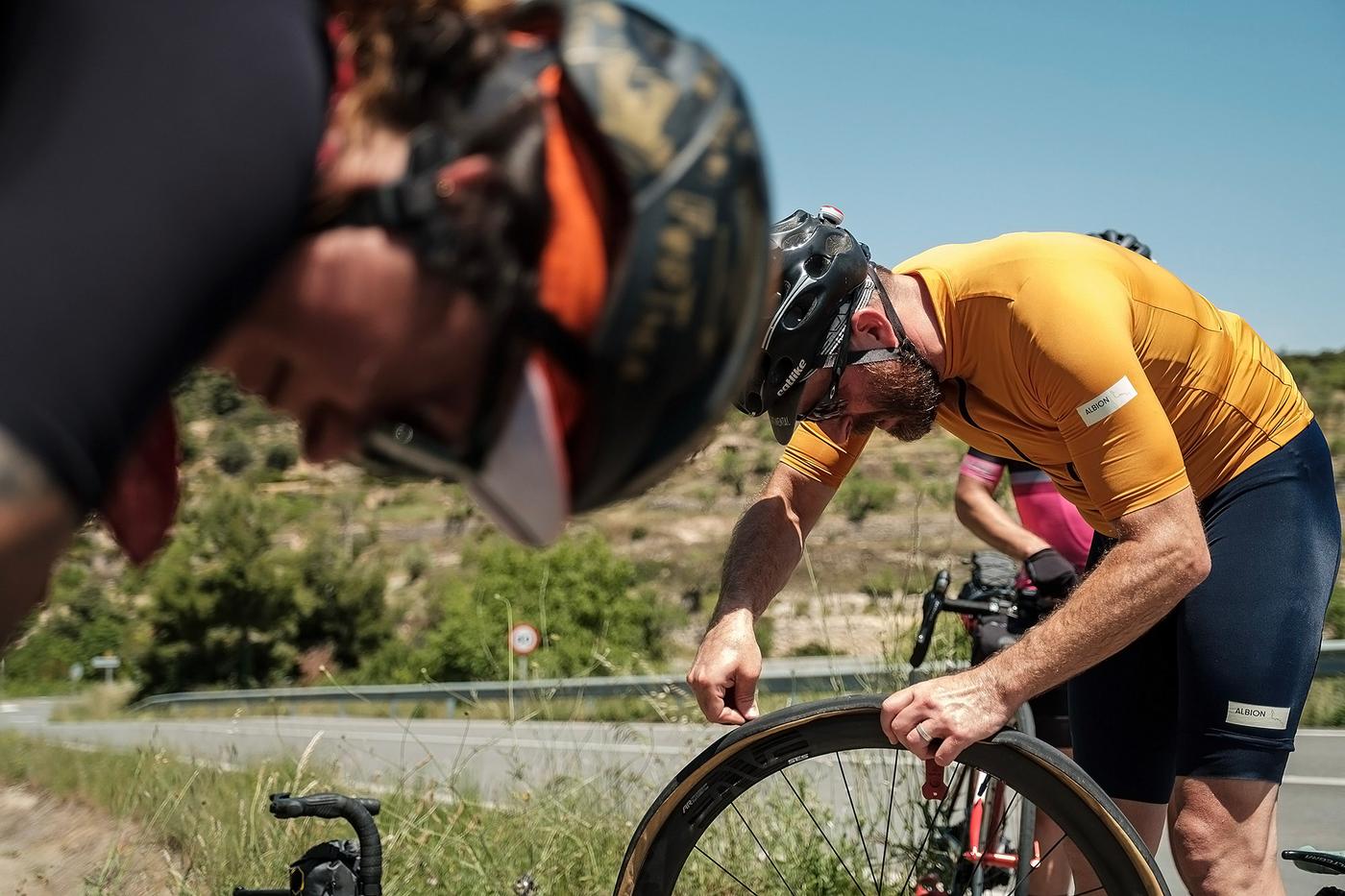 We arrive at Joan’s house with an incredibly warm welcome, great food, introductions to an amazing group of people, and the tone is set for a trip that will stay long in my memory. With bike bags packed and loaded we set off for four days of incredible cycling, great conversation, laughter, copious amounts of Cacaolat, the odd near-death experience, and education in paella. 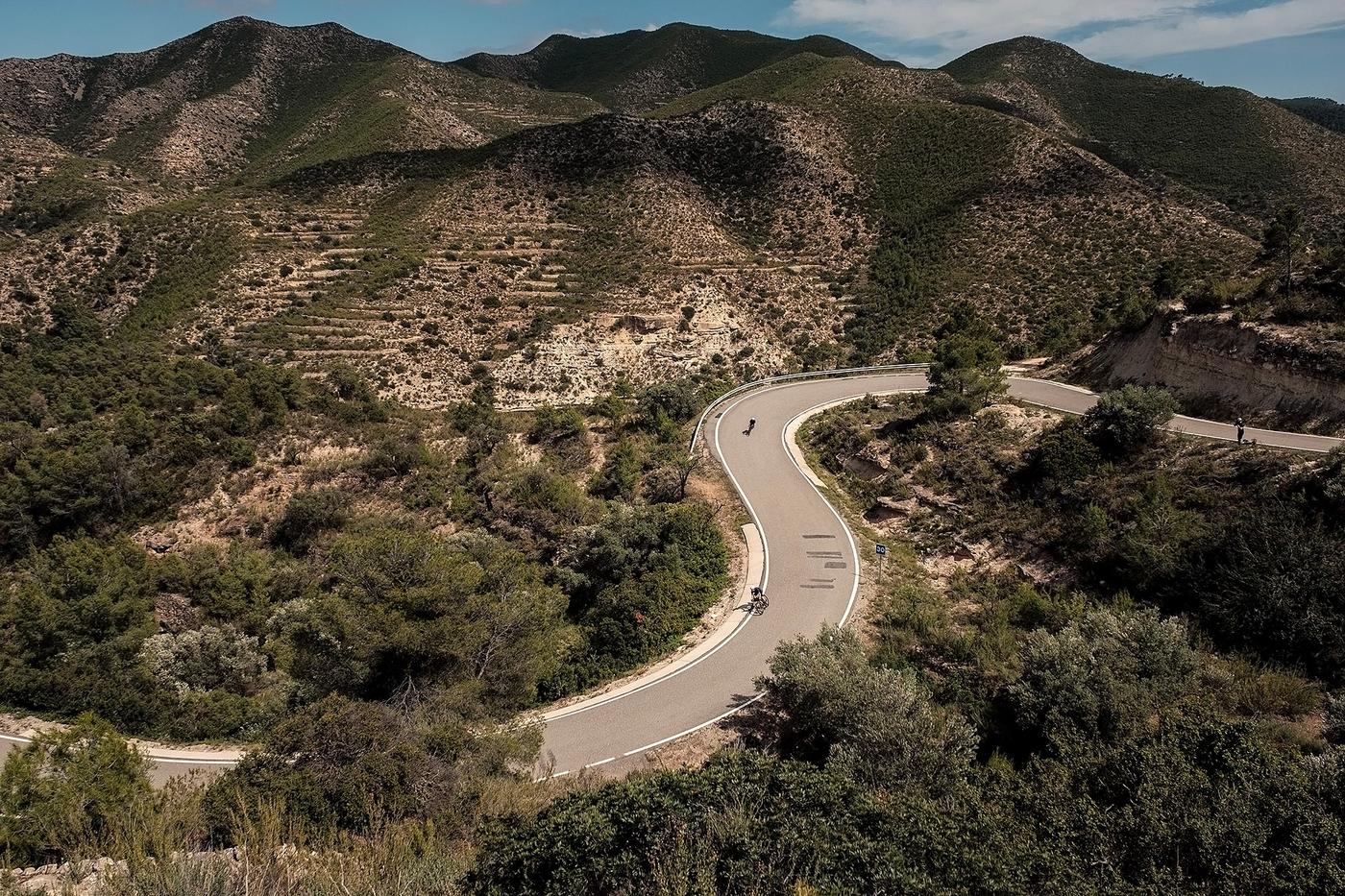 This part of Catalonia is a long way from the busy streets and wealth of Barcelona and Girona. It’s quiet and it is beautiful. It is a region that means much to Joan and his enthusiasm for the route is infectious. The seemingly endless network of roads (the surfaces of which are unreal) sweep through olive groves and fruit plantations, ancient towns and villages, we climb and descend into mind-blowing river gorges, we pass paddy fields, lots and lots and lots of pigs, rivers, lakes and serene forests where time stands still. This part of Catalonia was hit hard during the Spanish Civil War and there are reminders everywhere from an out-of-place monument to Franco to mountain top bunkers carved into rocks. Our trip would culminate with a climb up to Mont Caro (a 1400m limestone massif which dominates the skyline – Joan tells us it is ‘quite hard’) followed by a long descent to the coast. The climb to Mont Caro is incredible, it is hard but visually stunning and despite cloud covering its summit, it was a big highlight of the trip for me. We’d formed a really strong bond by this point and to see everyone’s joy at reaching the top was a very special moment. 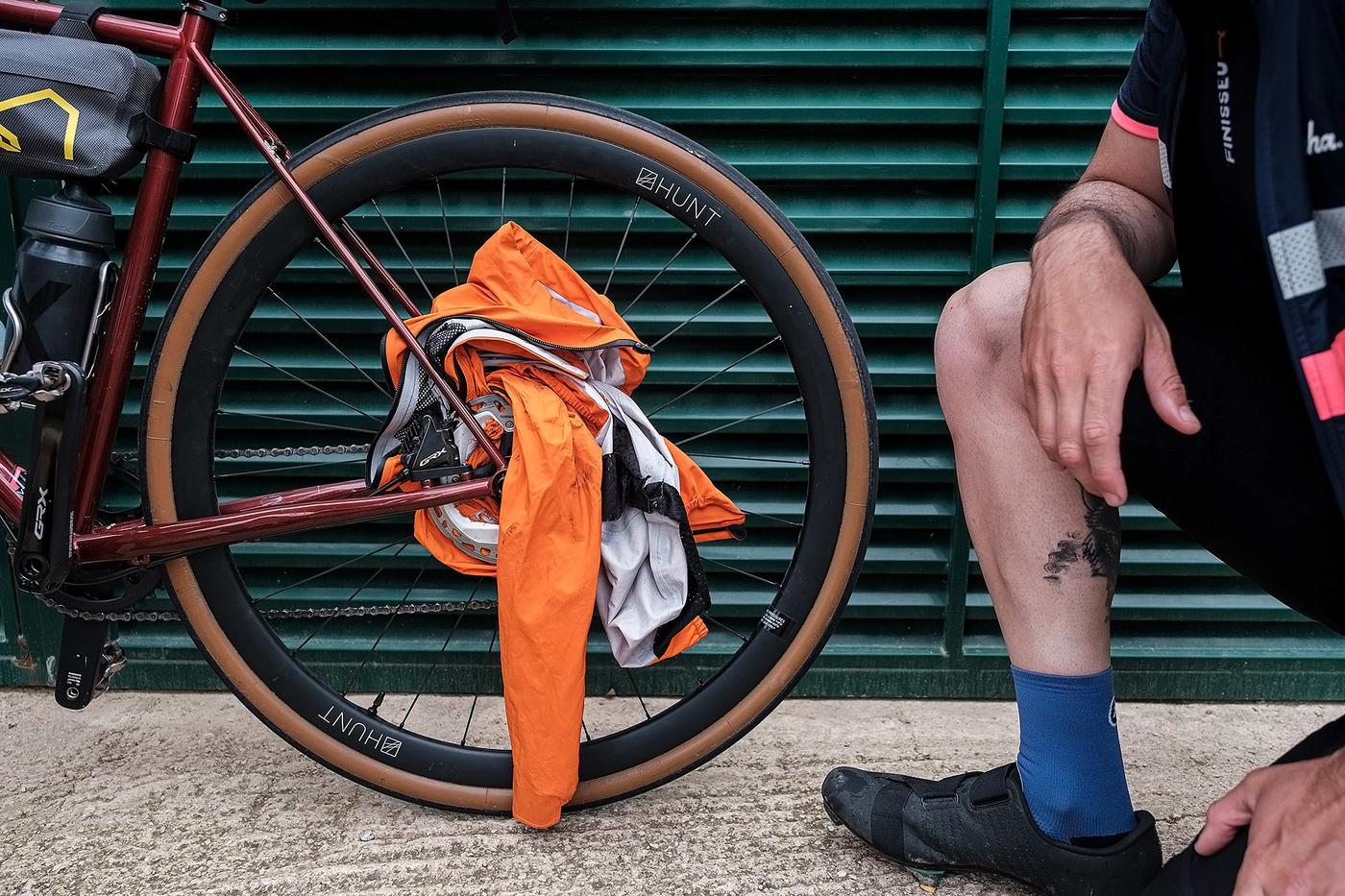 The descent was also a blast until my favourite jacket came loose from the webbing on my handlebar bag and found its way into my rear disc brake. Smiles to Cries in the blink of an eye. Fortunately, the bike stayed upright and the whole crew stopped to assist in extracting what was left of the jacket from the mechanism and Joan insisted on resetting the brake set up. The community is strong. I’d had a very lucky escape. The ride to the coast took us into the region’s rice-growing area and the flat, water-logged ground is a mecca for wading birds, flamingos, and countless other bird species. It was another massive highlight and the arrival onto the beach and the view of the sea was a really special way to finish another eventful day. 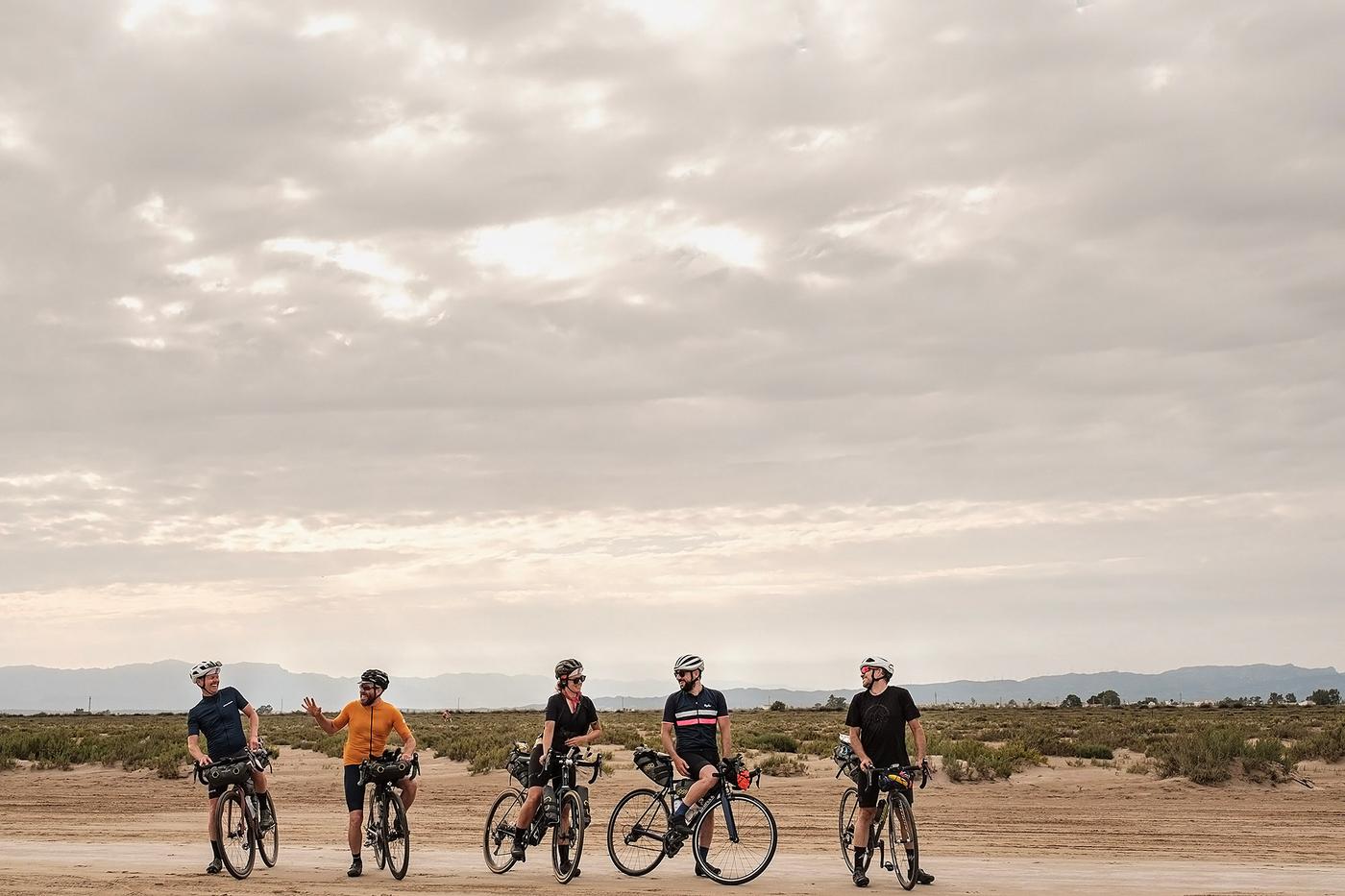 We knew little of Kromvojoj when we started this adventure but felt part of its DNA when we finished. This was thanks to the welcome of Tomás, Joan, Uri, and Bernat and the attention Joan has paid to the Parcours, ensuring you get to absorb all this most beautiful part of the world has to offer. But please, do not eat Paella for dinner.
Here’s to being stronger than vinegar. Kromvojoj – one route, many ways. 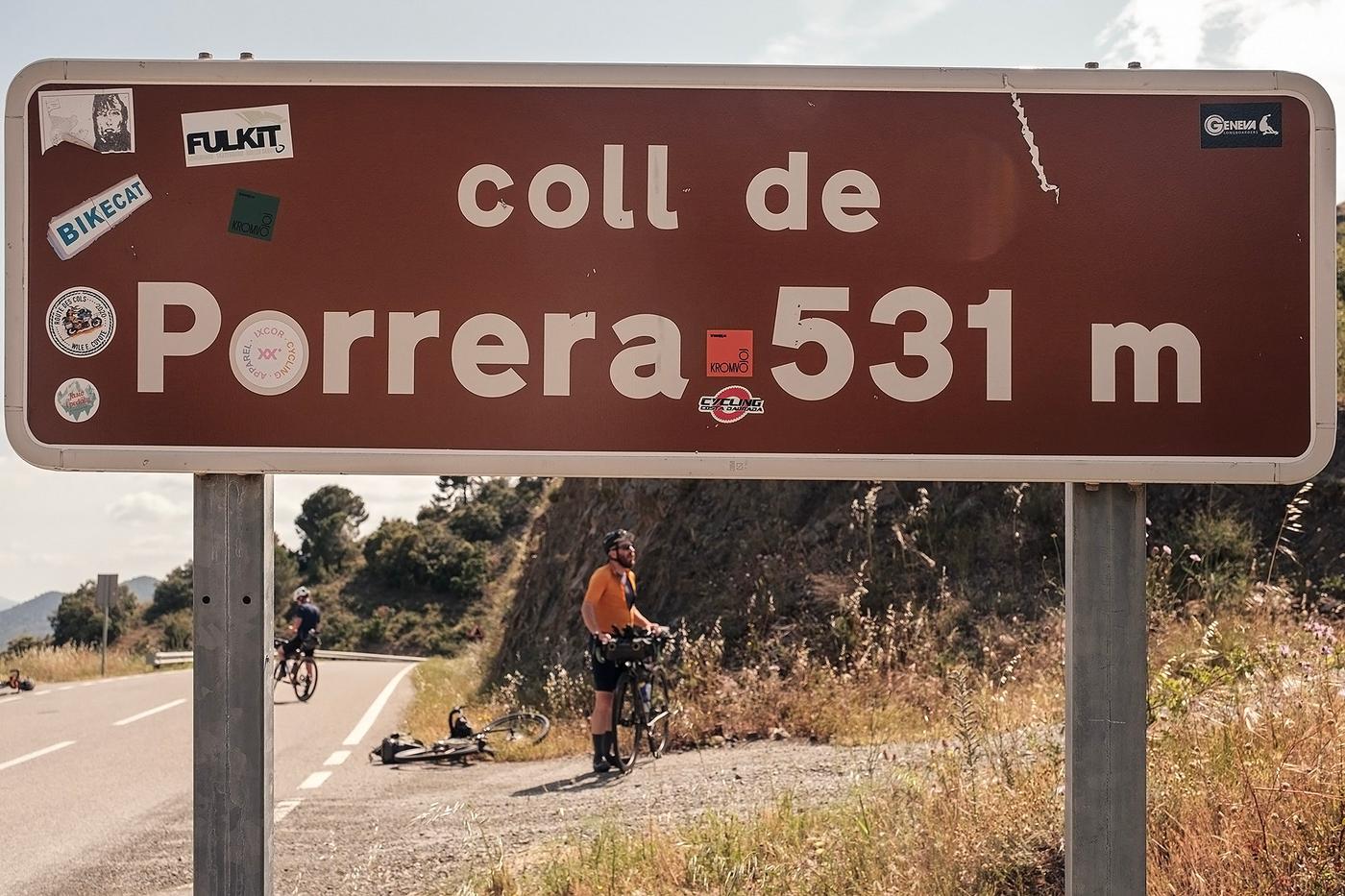 KROMVOJOJ:
Although nowadays the calendar is full of events throughout Europe, our intention is to transmit the values of classic and primal cycling. We want the partakers to become a lively part of the experience, far from just a participant’s number or commercial exchange. We look forward to having them enjoy being part of the cycling community and invite others to join this adventure. Being part of the Kromvojoj is without a doubt living its motto: Cycling, Diversity, and Culture.