Am I the only one here that cringes every time I hear the word gravel? It’s been a common word in my world for a few years now, and believe me, I hear the word a lot… but I just can’t embrace it. The word gravel still brings to mind all-day slogs across flat/windblown prairies on the type of surface that’s devoid of traction yet still slowly and steadily saps your spirit. In other words: somehow, somewhere it firmly lodged in my brain that “gravel” is the antithesis of “fun.”

The gravel word is particularly misleading when paired with my new Evil here. I’ve been riding this beast for a few months now. I can’t get enough of it. But I’m having a hard time communicating with other riders about how I’m spending my hours on this bike. I’ve been stringing rides together that combine my favorite road loops with some of the best singletrack trails in Santa Cruz County. I’m going from smooth pavement to loamy forest soil. There might be some sand, a few short (and exciting) rock gardens, but I go out of my way to avoid the surface commonly known as gravel. 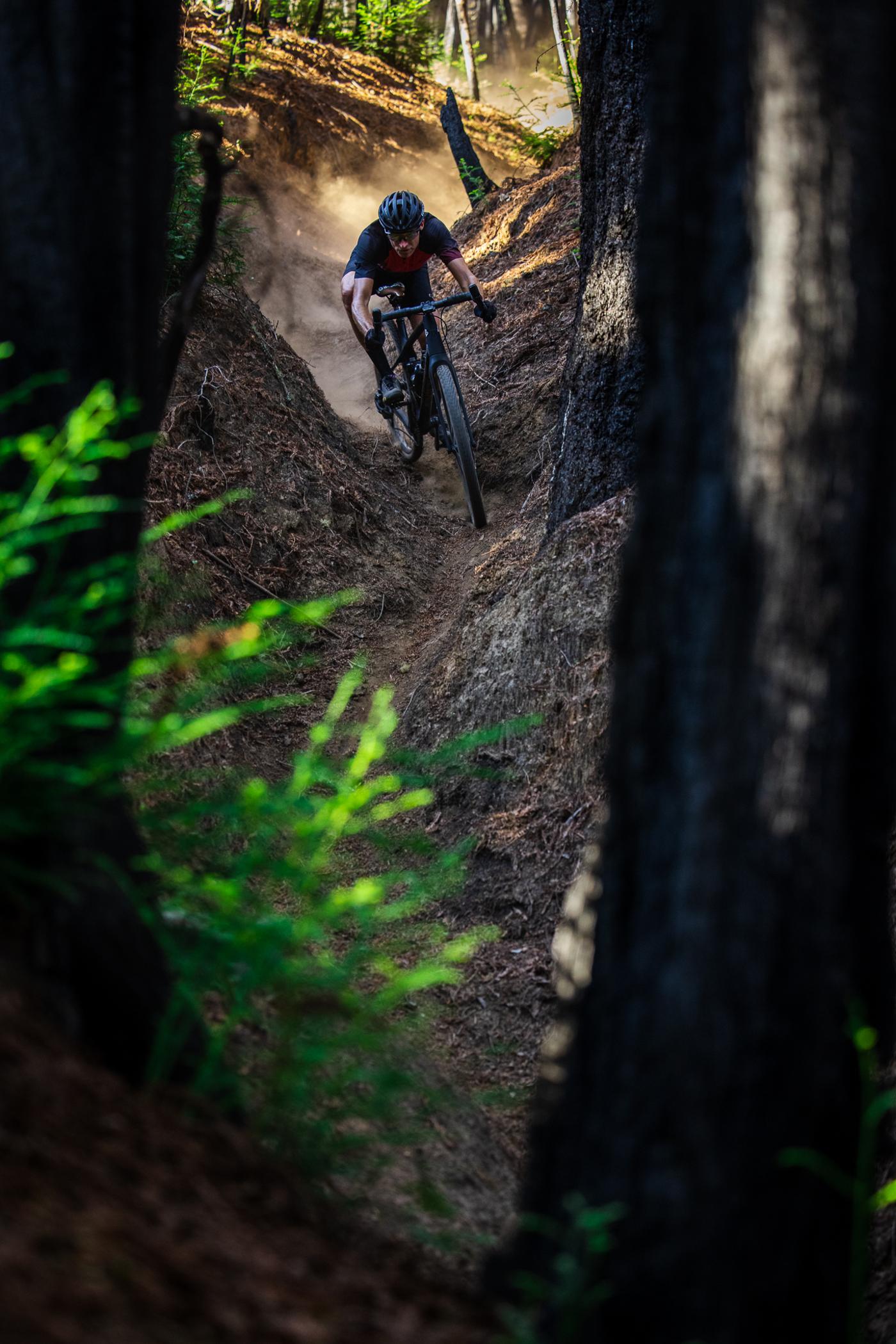 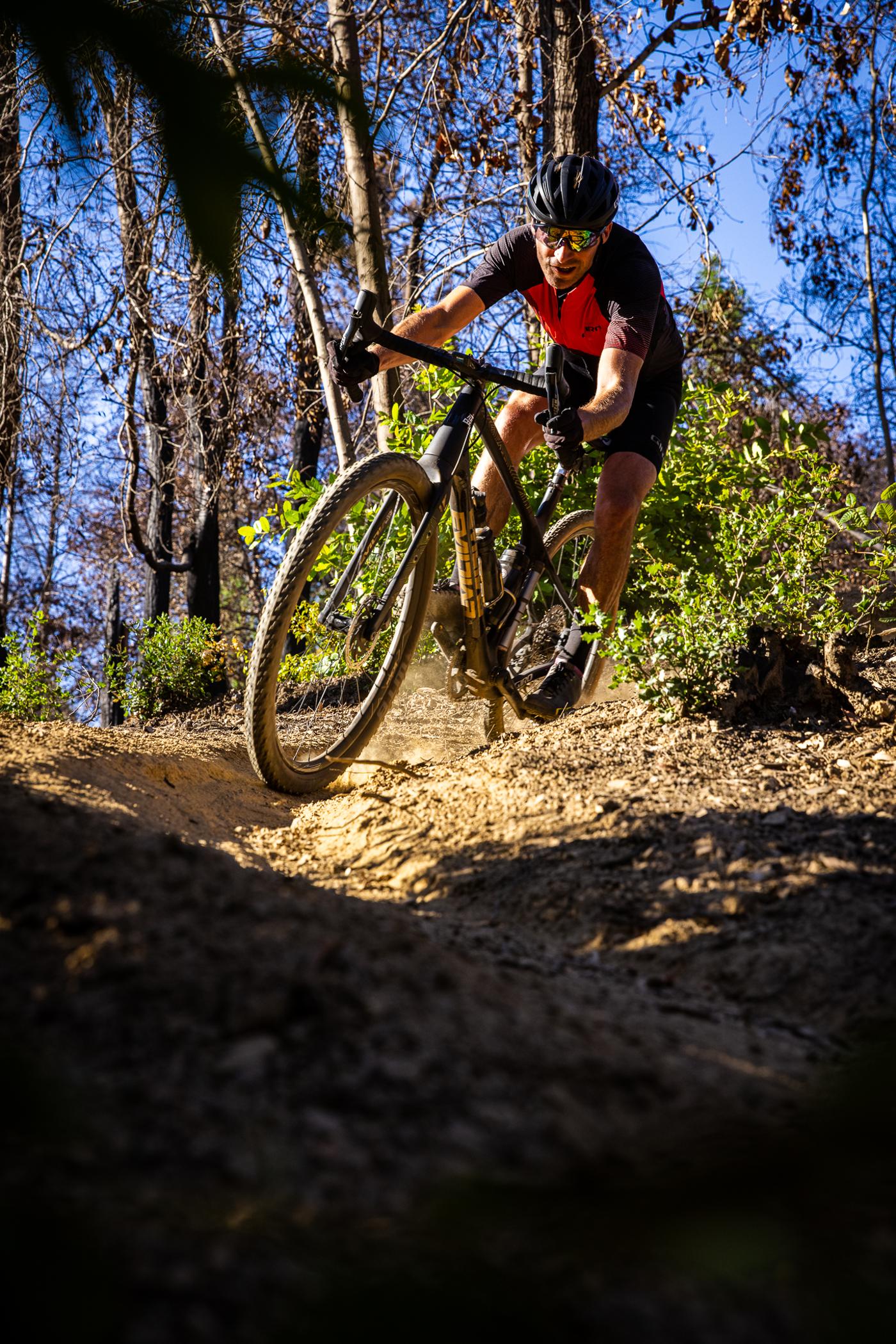 I’m not saying that I’m some kind of uniquely gnarly bike rider. I also understand the appeal of gravel riding: exploring the unknown, getting off busy roads. And this isn’t meant to be a love letter about my new bike either. Here’s my point: if most core riders don’t know that you can have this kind of fun on this kind of bike, then the general population is completely blind to the potential good times that come with bikes like the Chamois Hagar. 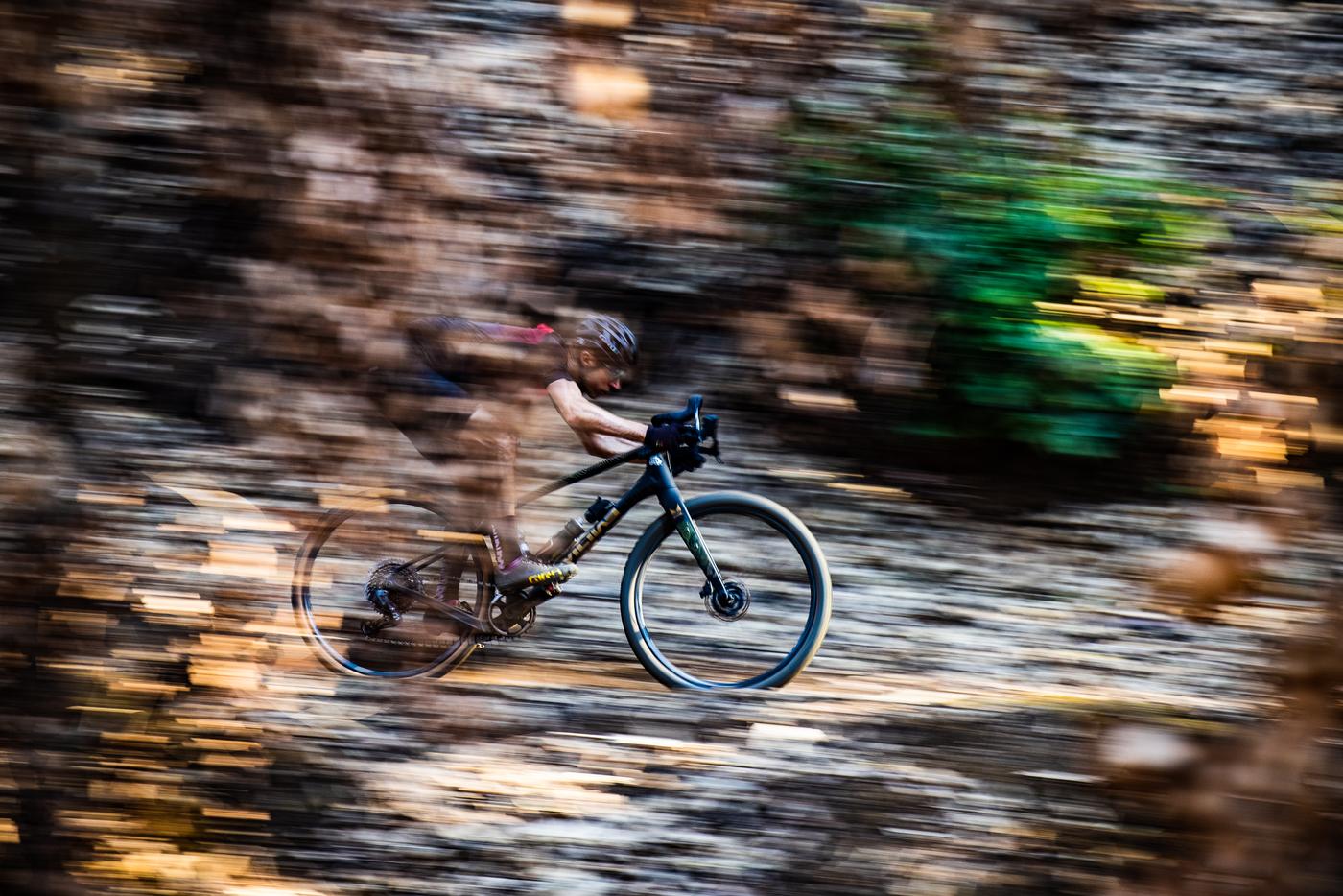 Although Evil seems to lead the charge, there are other options that unlock this up-for-anything attitude. Kona’s Sutra ULTD has the same spirit and the full bike costs about the same as my Chamois Hagar frameset. Salsa and Devinci have some great options written about right here on the Radavist. I’m convinced that this magic formula – the stability of big tires, the confidence of a dropper post, the efficiency of a ‘cross bike, the numerous hand positions afforded by drop bars – can appeal to the masses of potential new riders more than any other style of bike.

The problem, I believe, is that these adventure enabling machines are hidden behind the veil of the term gravel.

Anyway, here are the highlights of my Evil “adventure” (definitely not a “gravel”) bike. 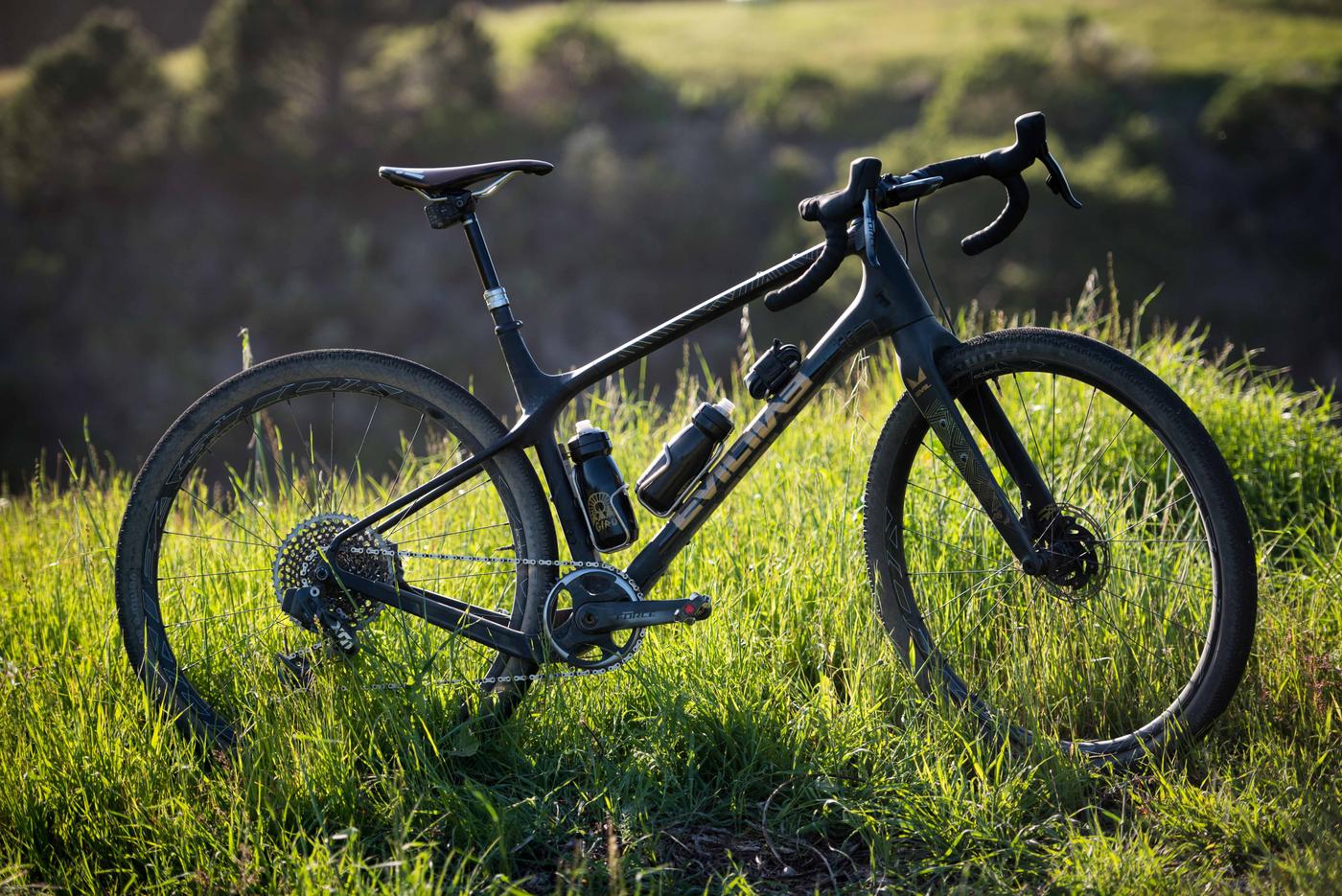 THE FUTURE OF BIKE DESIGN OR BLASPHEMY?

I’ll be honest, it took me longer to get used to looking at this bike than it did getting used to riding it. It’s pure blasphemy in the eyes of most traditional drop bar riders, but this unconventional setup has completely transformed how and where I ride. I can’t think of another bike (mountain bike, road bike, ‘cross bike, gravel bike) that’s been such a leap from what I’m used to, but it took me all of about 5 seconds to get comfortable. 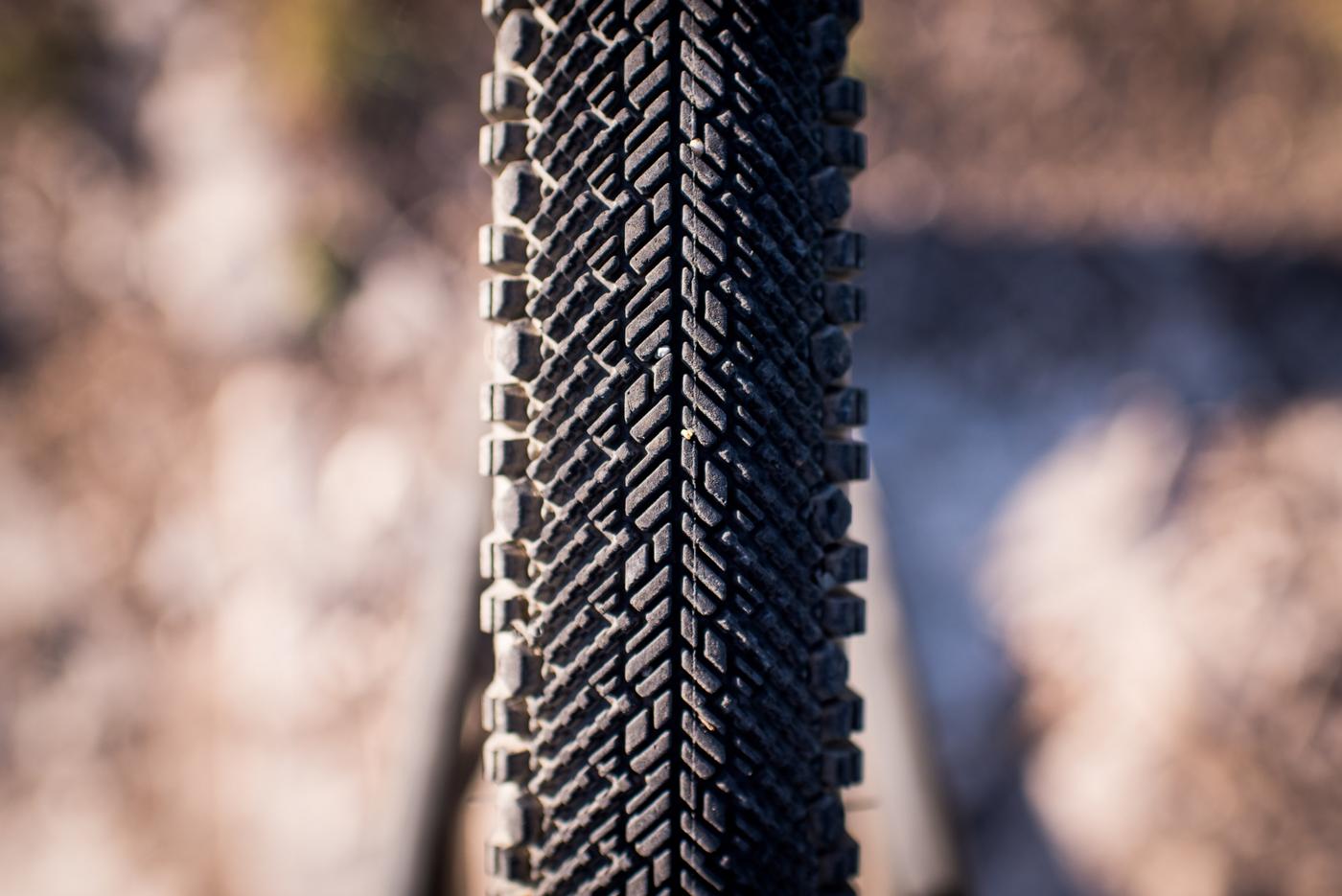 Pretty much unlimited! I built this thing up with WTB Venture 50s and spent the bulk of my time on those. They’re big and supportive in the rough, roll pretty quick, and have a good bite in loose corners. The only real drawback I’ve found with Ventures is a bit of squirm leaning hard on pavement. Good ol’ WTB Nanos have been a longtime favorite of mine for just about everything and rolling Nano 40s on this rig gives it good, spirited pep on pavement and climbing. I recently upgraded to a Nano 29×2.1 front, paired with the Nano 700x40c rear and that unlocked a whole new level of downhilling prowess. There’s still room for me to run a Nano 2.1 rear, but I’ll save that girth for when I really need it (maybe Grinduro Shasta?). Oh, iI also went the complete opposite direction for a couple of weeks and converted this thing into a full on road bike with WTB Exposure 32c tires, a carbon (static) seatpost and Look Keo Blade road pedals. Obviously not what this frame was intended for, but it handled fine despite the bottom bracket looking dangerously low. 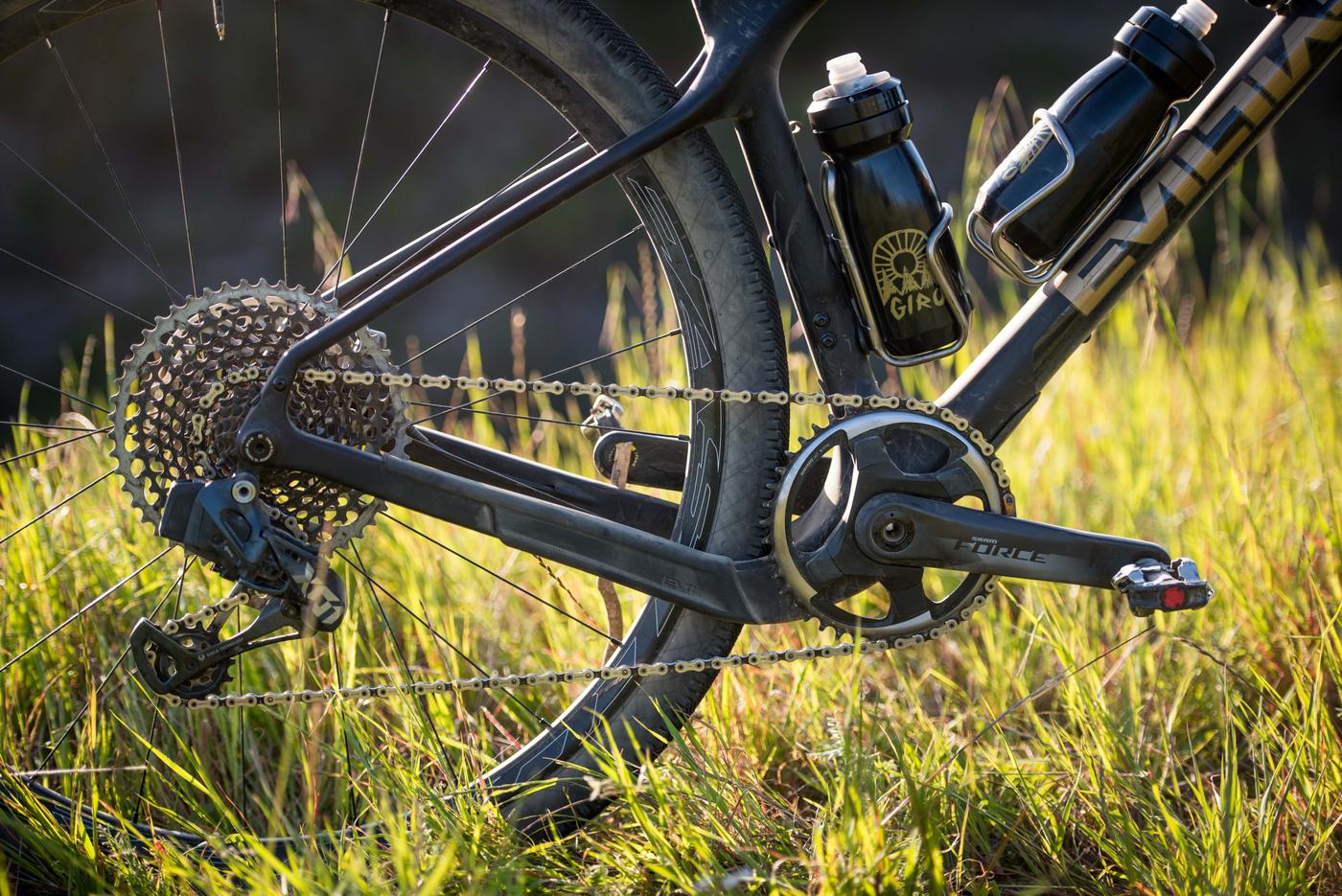 This is my first time owning/riding a bike with electronic shifting. I really like the idea of SRAM’s mix/match ability. I paired a XO mountain bike derailleur with an XO Eagle 10-50t cassette and a SRAM Force road crankset with a 42t chainring. That gear range is plenty for me on the ups (I could have even gone bigger on the cassette – up to a 52t – and smaller on the chainring) and this range is adequate for pedaling on descents (if I run out of gears it’s probably faster to stop pedaling and tuck anyway). One thing that does take time to get used to, however: there are big gaps between gears. It’s something that’s never bothered me on my mountain bikes, but can be a bummer on the road. 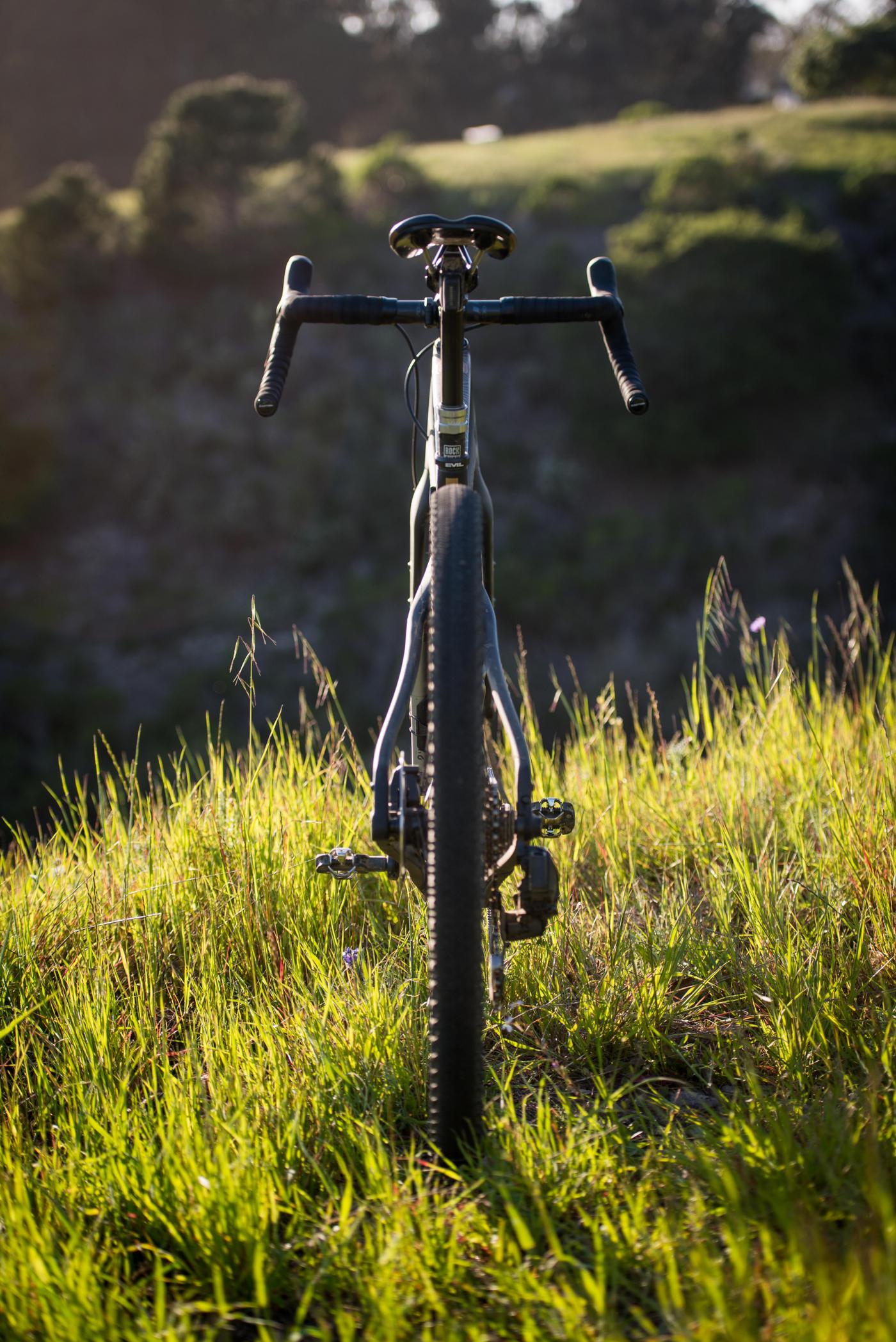 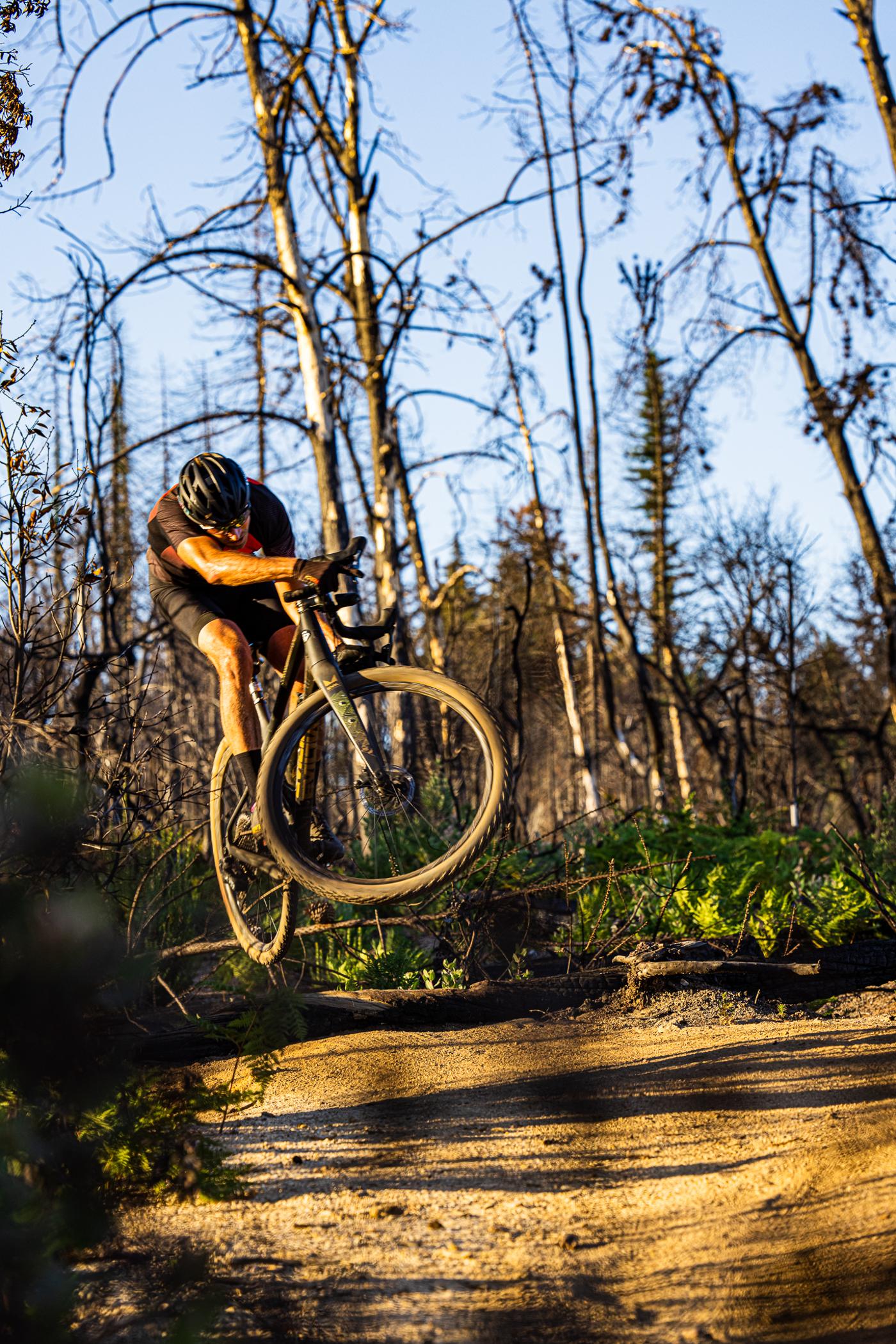 I ponied up and spent more than I ever imagined spending on the SRAM Reverb AXS wireless dropper post. And, well, I’d say it’s worth the money. It took me a few minutes to figure out how to pair the post to my shift levers, but even for someone like me (definitely digitally tech challenged), setup wasn’t too complicated. To raise/lower the post, you hit both right and left levers simultaneously. It works flawlessly, but I do sort of wish I could dedicate one of the levers to operating the post and the other to shifting, but that’s not possible (left lever shifts down the cassette, right levers shifts up the cassette). 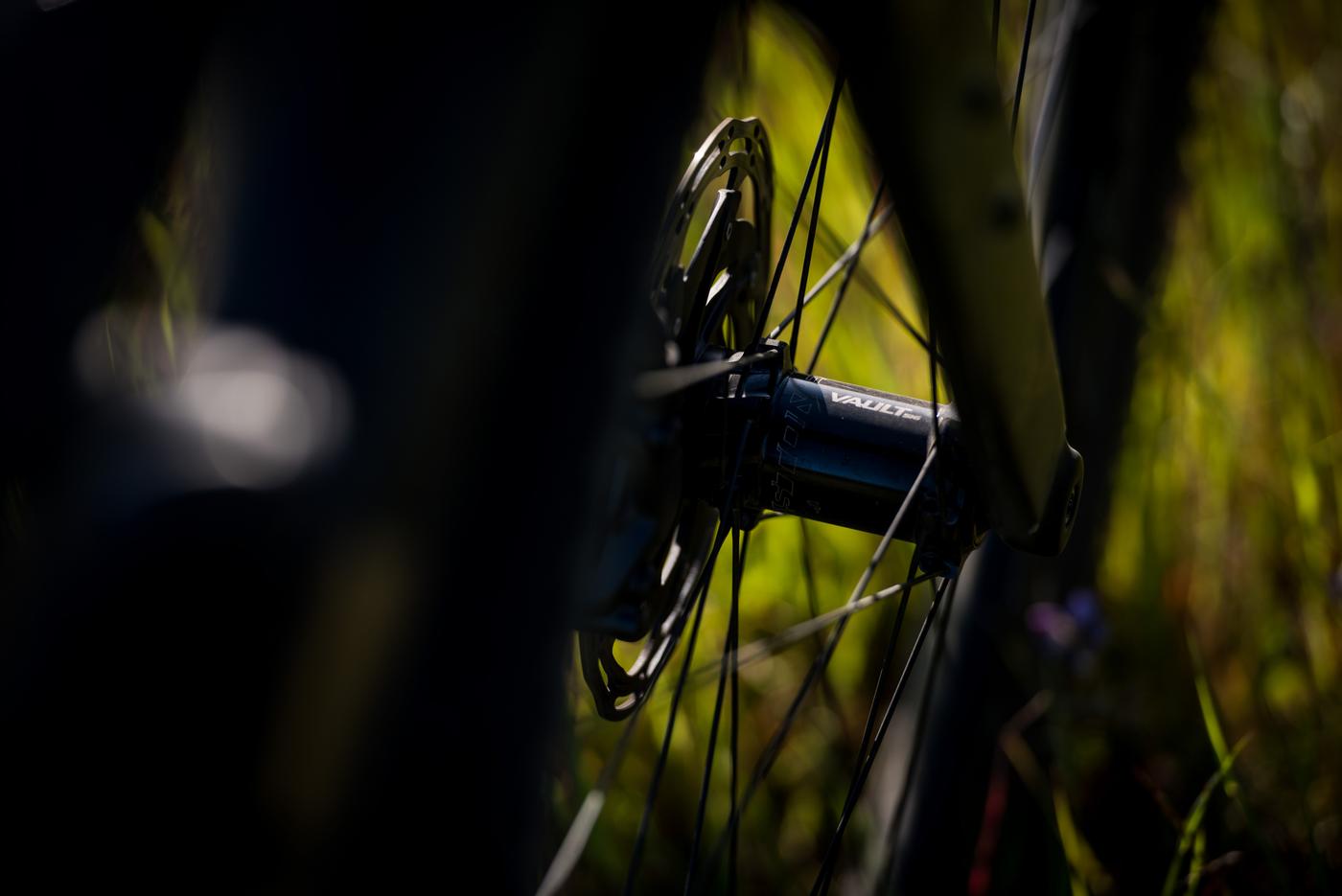 These Easton EC90 AX wheels lived on another bike and were transferred over to the Evil. They’ve seen almost two years of abuse and so far so good! I’ve trued them a bunch, but the carbon rims aren’t showing any signs of trouble and the bearings are still running smooth. I really like the feel of Easton’s Vault freehub – tons of engagement and feel really quality and premium. Let’s be honest, Easton wasn’t always known for great hubs, but this Vault hubset can stand up against the elements as well as any other that I’ve seen. 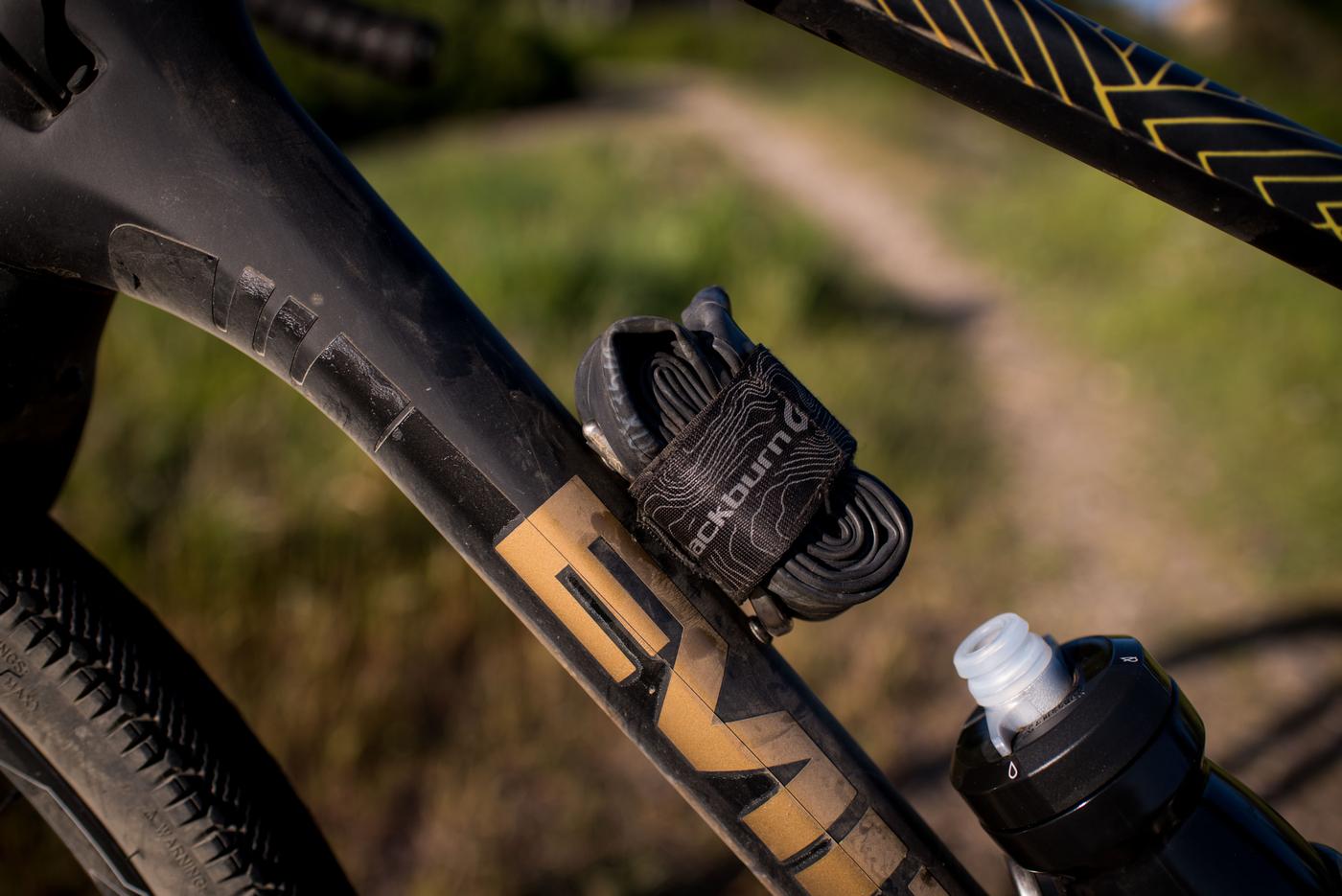 This bike has a bunch of bottle bosses: three inside the front triangle, one on the top tube, and one on each side of the fork. I dedicated one of these to light-duty cargo. This tube is strapped to a cut-down, titanium King cage. I think I got that cutdown cage from Andrew at King as a tradeshow swag piece/bottle opener in like ’03 or something. It’s kicked around in my toolbox for nearly 20 years, now it’s an important part of my adventure bike! 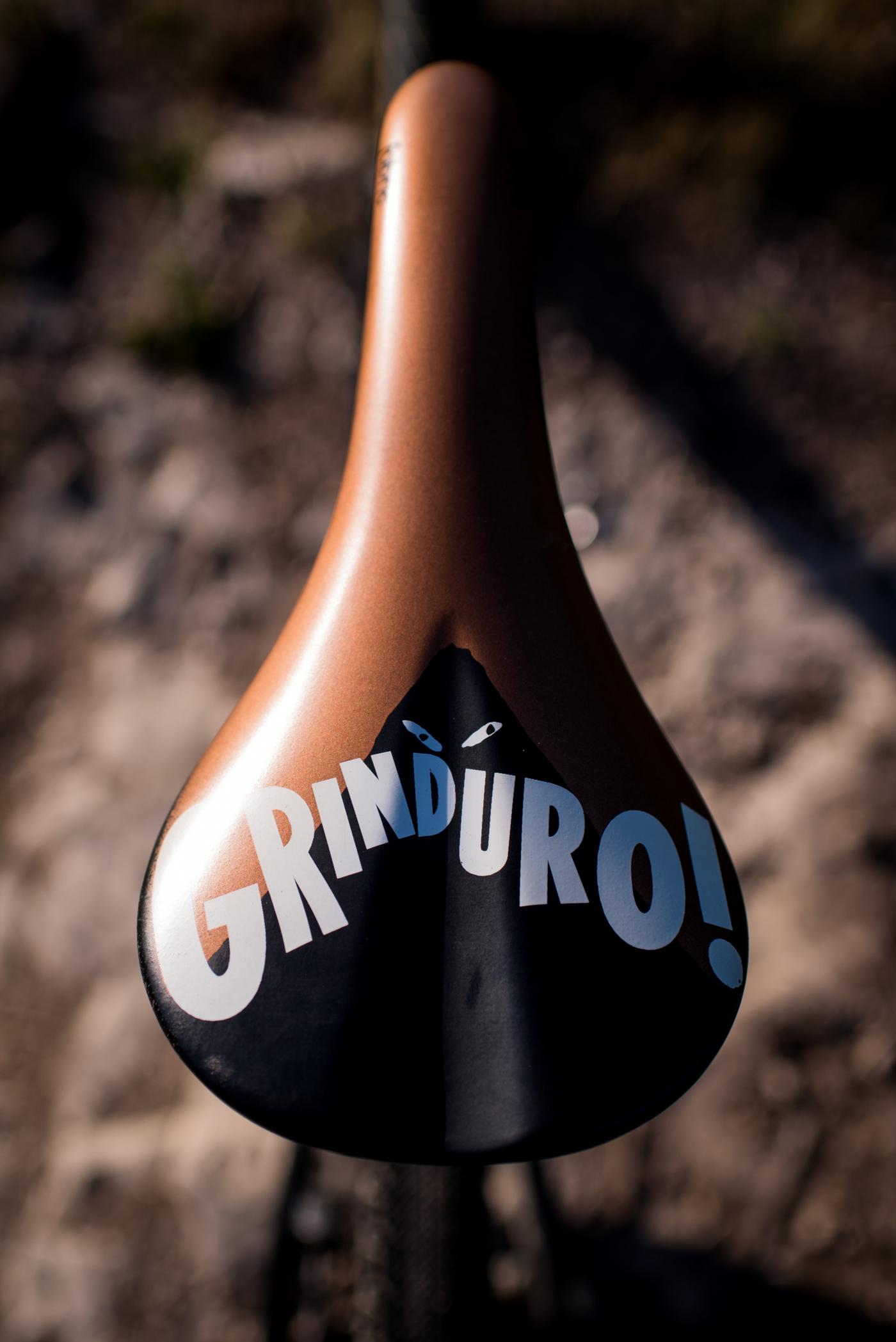 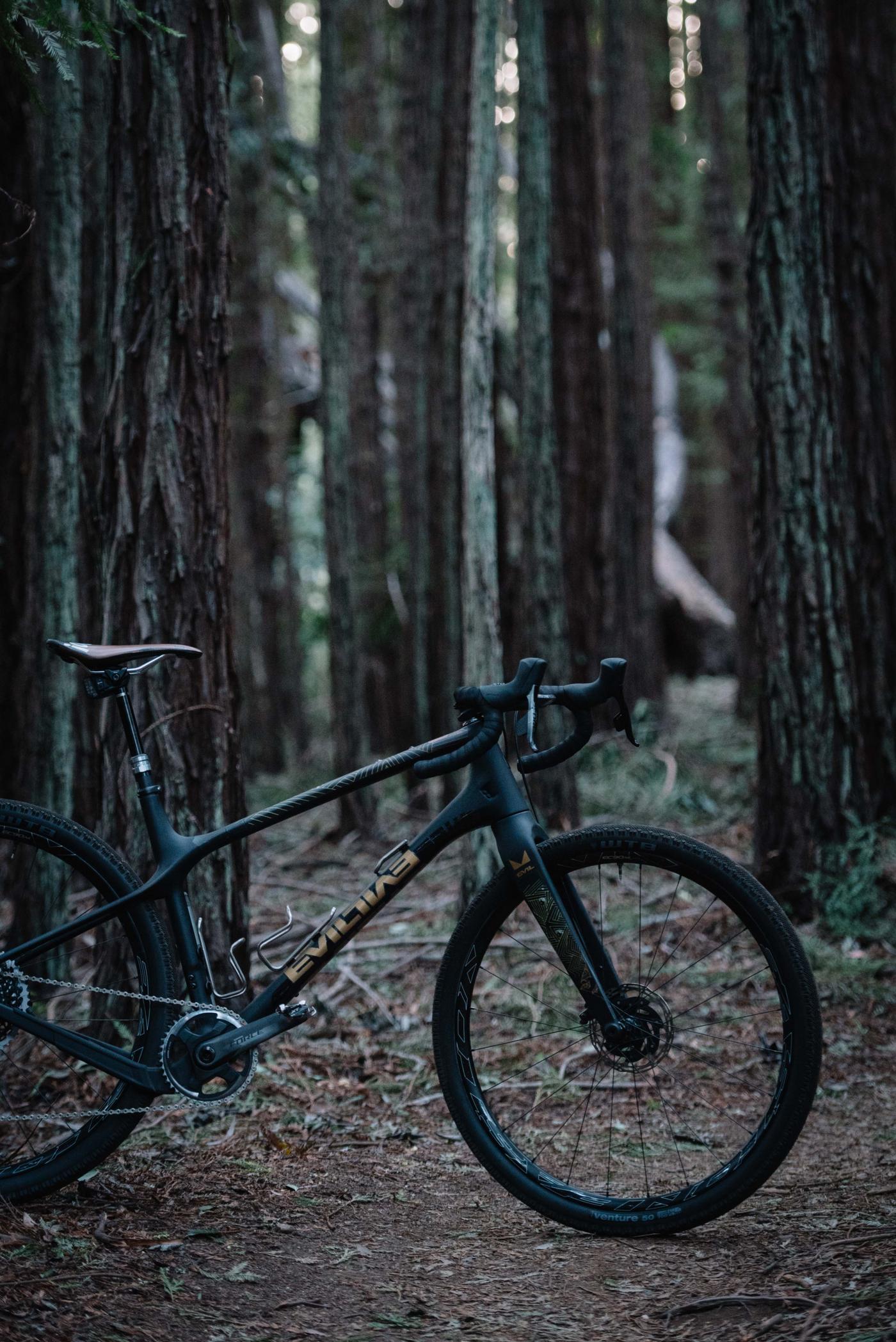 I like this saddle so much I almost feel bad sitting on it! I won this at Grinduro Scotland a couple of years ago. It’s a limited edition Fabric Scoop in bronze (3rd place in Pro Men). So far I haven’t climbed the podium any higher than 3rd at Grinduro… maybe that will change with this new Evil? 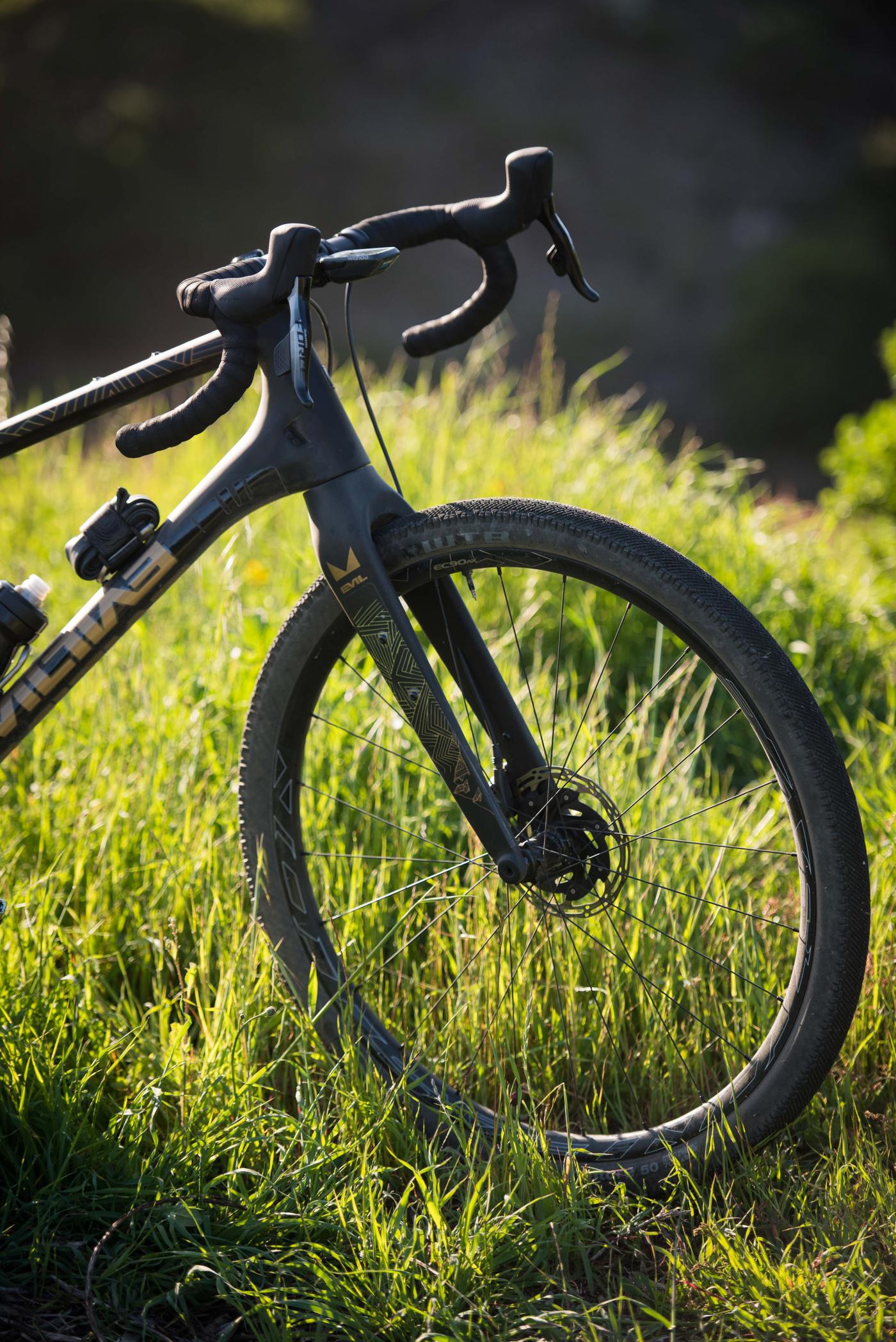 DYEDBRO frame wrap. Evil ships these frames without any graphics or decals. It came out of the box murdered out, matte black. I got to choose from what seems like hundreds of colors from Evil’s website for the frame decals, and then I applied a wrap from DYEDBRO to 1. Give the bike a bit more flair and 2. Protect my beloved carbon frame/fork from inevitable rock strikes and scratches. This was my first time applying a frame protector. I was surprised at how thick/protective this stuff is… I guess I expected vinyl like a big sticker, it’s not that at all. It really does help a frame stand up to abuse. 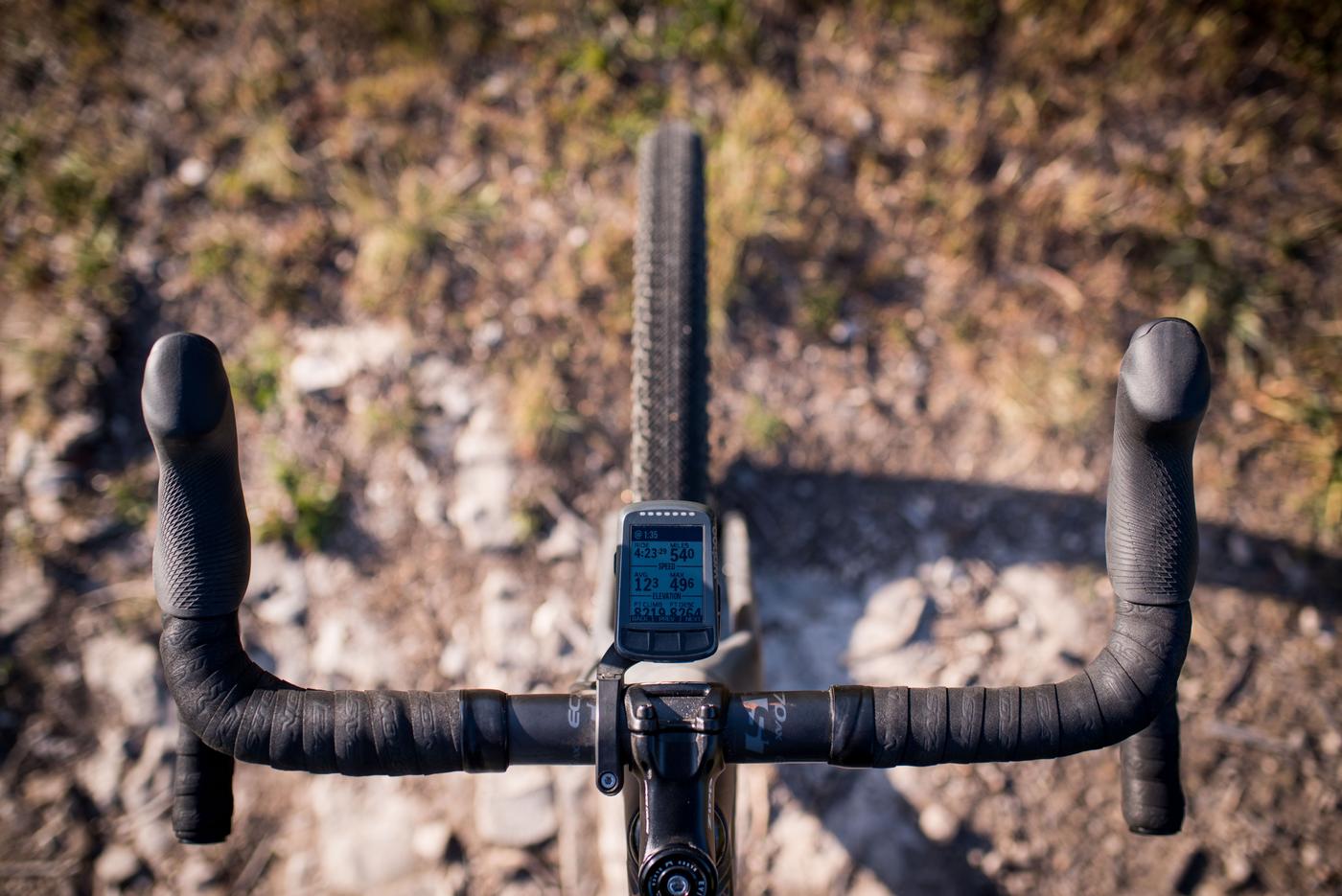 I’ve been riding these Easton EC70 AX bars for a couple of years on a few different bikes. They have “just enough” flair at the drops (16-degrees) to make descending more comfortable, but not enough flair to put the levers at an angle. Also, I have to be honest here, I’m still a traditionalist at heart and the dropbars with mega flair still look odd to me. I understand that’s a crazy statement coming from a guy with a radical bike like this, but I guess I have to draw the line somewhere! 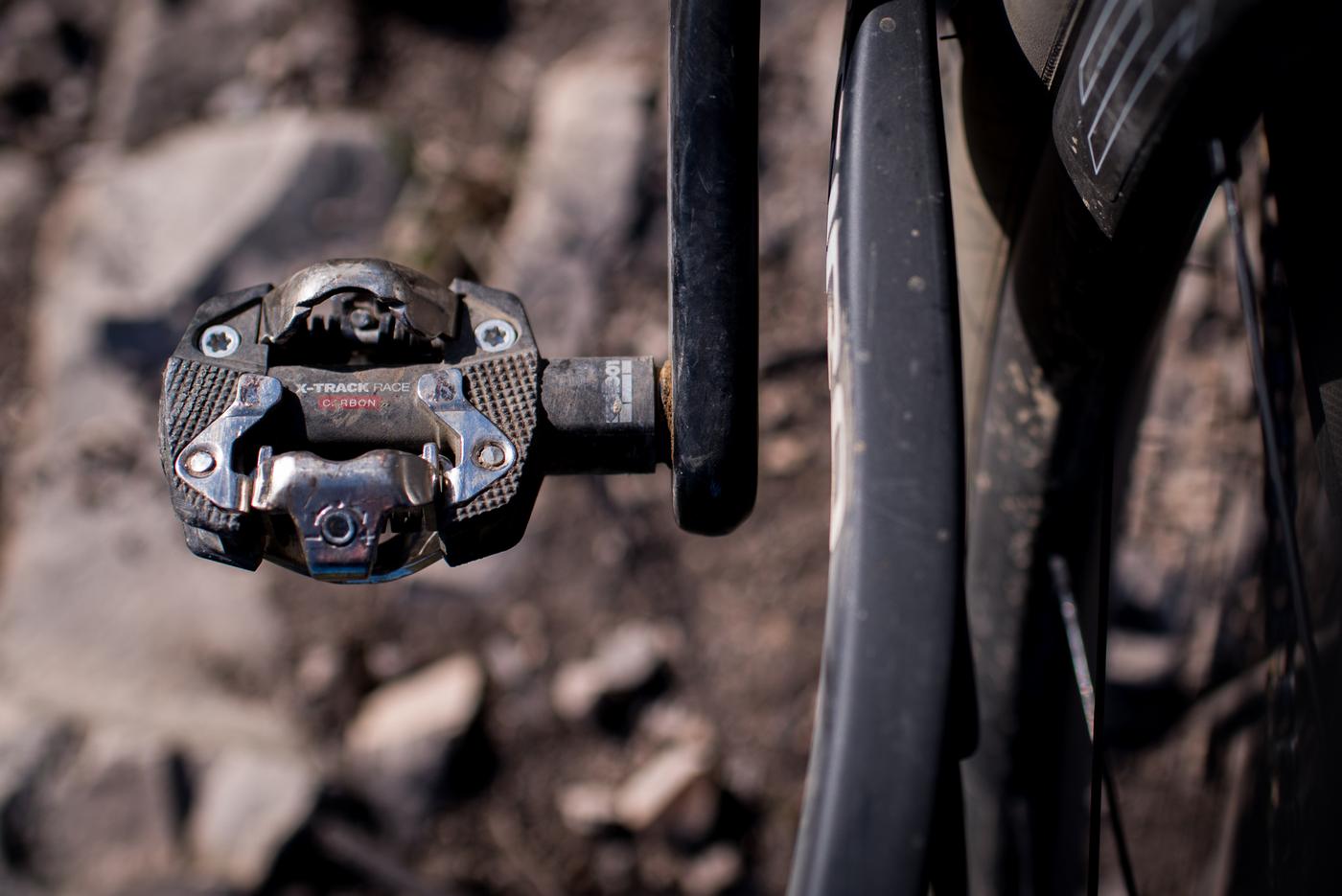 Look offroad pedals are a new addition in my life. I saw these X-Track carbon pedals online and fell in love… just about when I realized I needed to rebuild my Shimano XT pedals for the fourth time (granted, that’s four times in almost ten years). Point is, as much as I’ve appreciated Shimano pedals, these Look a bit sexier (if you ask me). So I made the jump and shed some weight in the process. Plus these pedals can use Shimano cleats so replacement cleats will never be an issue. So far they’ve been flawless. 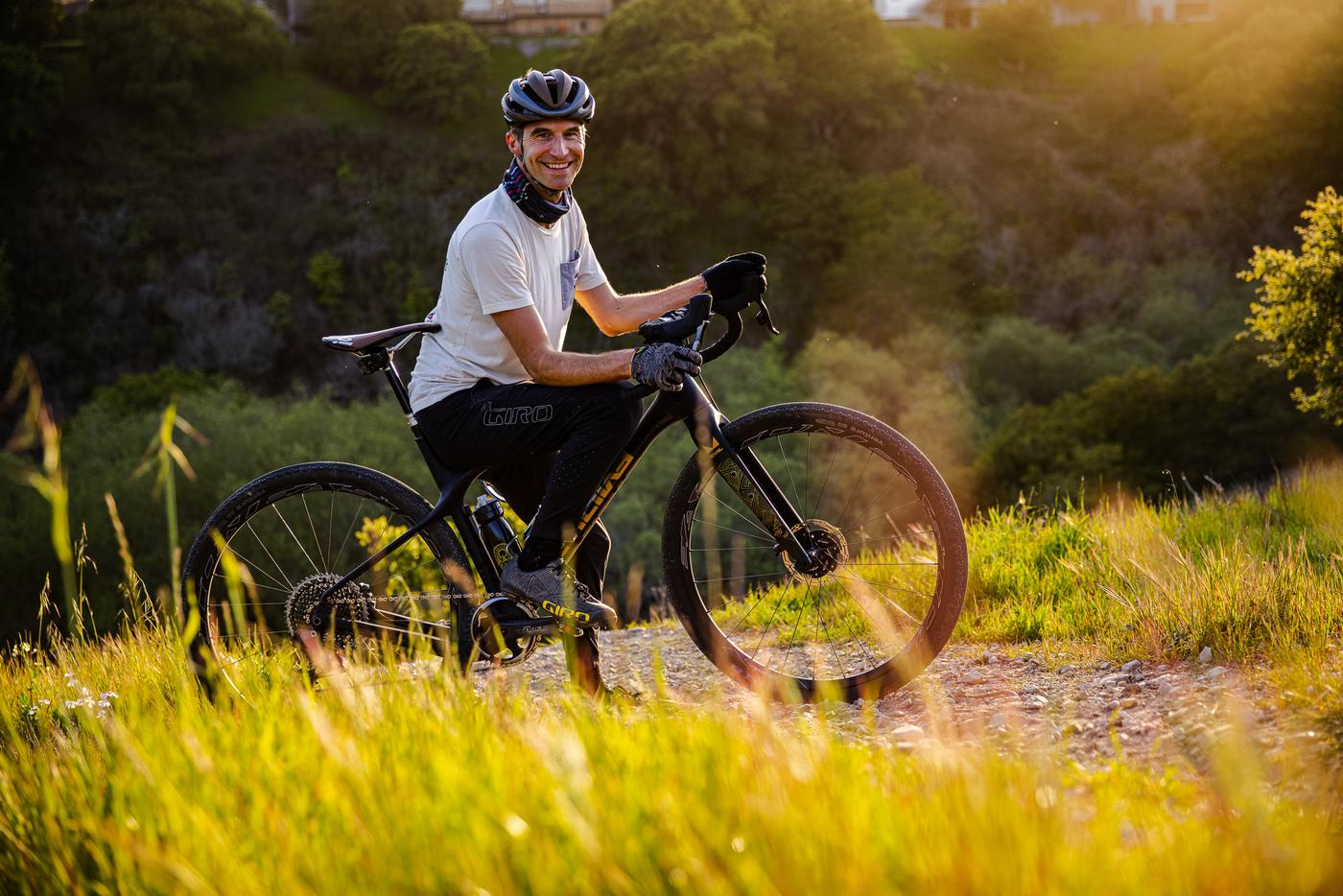 For another look at the Evil Chamois Hagar, check out John’s review in the Related archives…