Continuing our sporadic coverage of a few vintage gems uncovered at the Pro’s Closet during a recent visit is this rare J.P. Weigle Ice Cycle. Due to the nature of this creation, I reached out to Peter Weigle himself to see if he could fill the readers of the Radavist in on this stunning bike. Check out Peter’s story below accompanied by a plethora of photos…

The Ice Cycle was built in 1983 for my display at the International trade show in the NY Coliseum.

The studded tires were lightly inspired by the Eastern European motorcycle ice racers of the day. The wheels were shipped to a company called No More Flats. They didn’t make their product in the 26″ size yet but cut and segmented BMX foam cores and fit them piece by piece into the tires/wheels. Each wheel had hundreds of sheet metal screws inserted through the studs and into the foam cores. The wheels were super heavy! At the show, the bike sat on a piece of mirrored plexiglass (to simulate ice) and a foam “mound of snow” was formed to go under the front wheel. A No More Flats sign was placed near the bike evident in the photo.
At the show, a guy approached me who loved the studded bike. His family owned an indoor ice rink and an outdoor BMX track here in Connecticut. They invited me to bring the bike there to ride it on the ice. A local BMX racer did laps around the rink for photos. 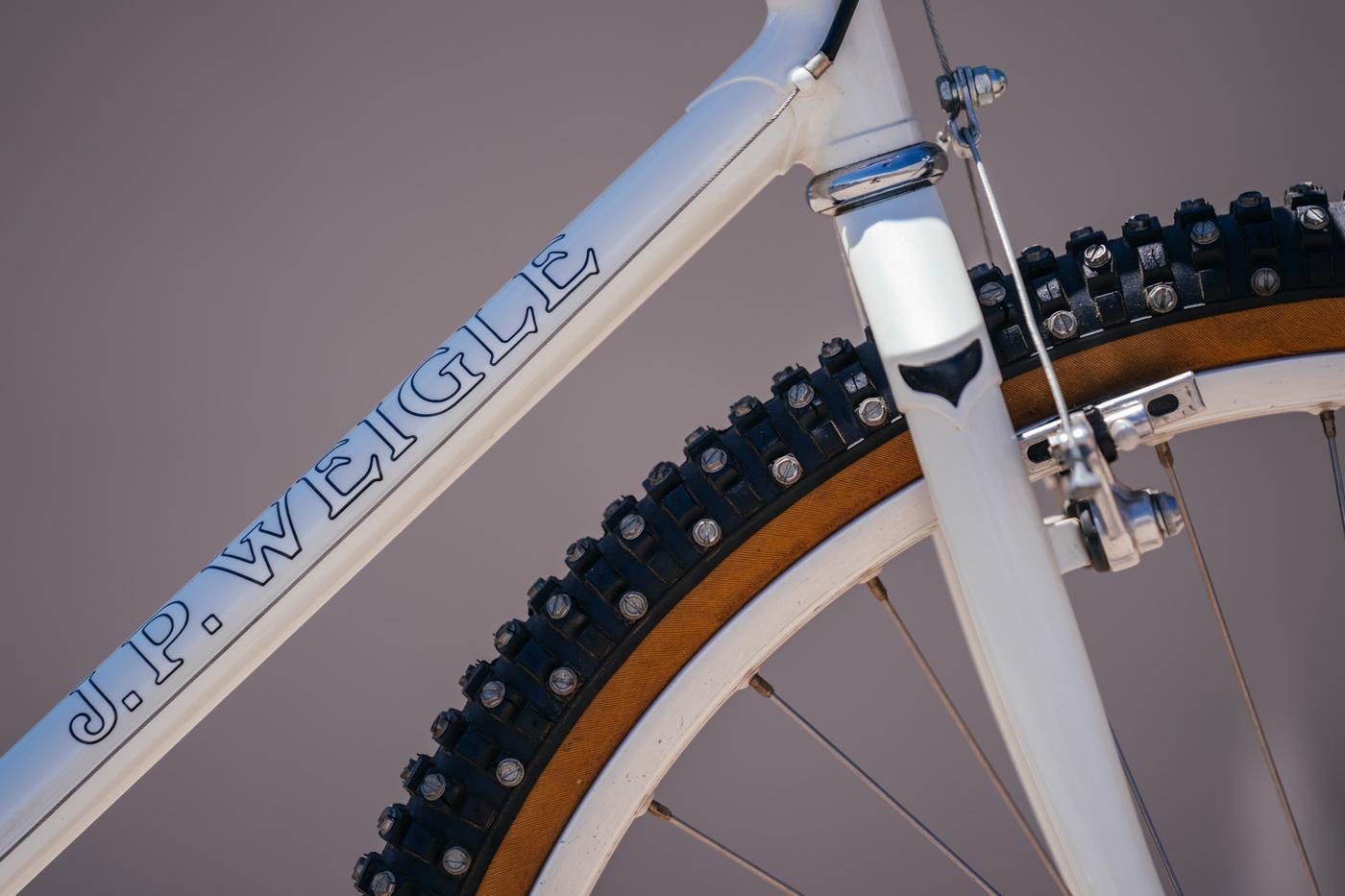 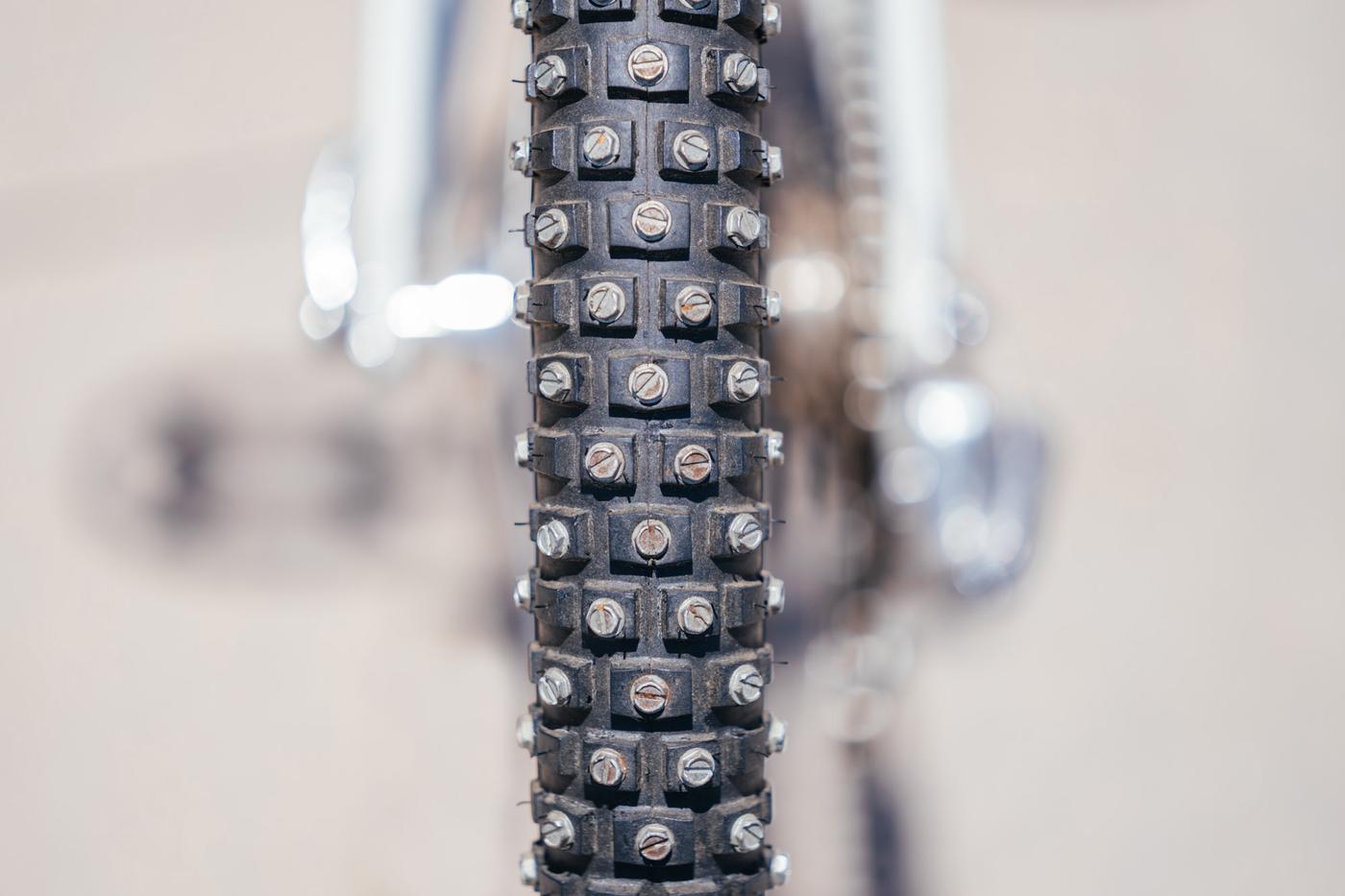 The bike worked great and was amazingly sure-footed. You could stand up and sprint and the tires would hook up fine. It cornered great but if you put a foot down the rear wheel would unweight, slide out and you’d go down.
I took the bike out on a local lake the year we had black ice. I rode past guys ice fishing and saw lots of DN iceboats flying by to add to the excitement. A while later I saw kids with BMX bikes heading out from the shore, that didn’t last long and they all walked their bikes back to safer terra firma. 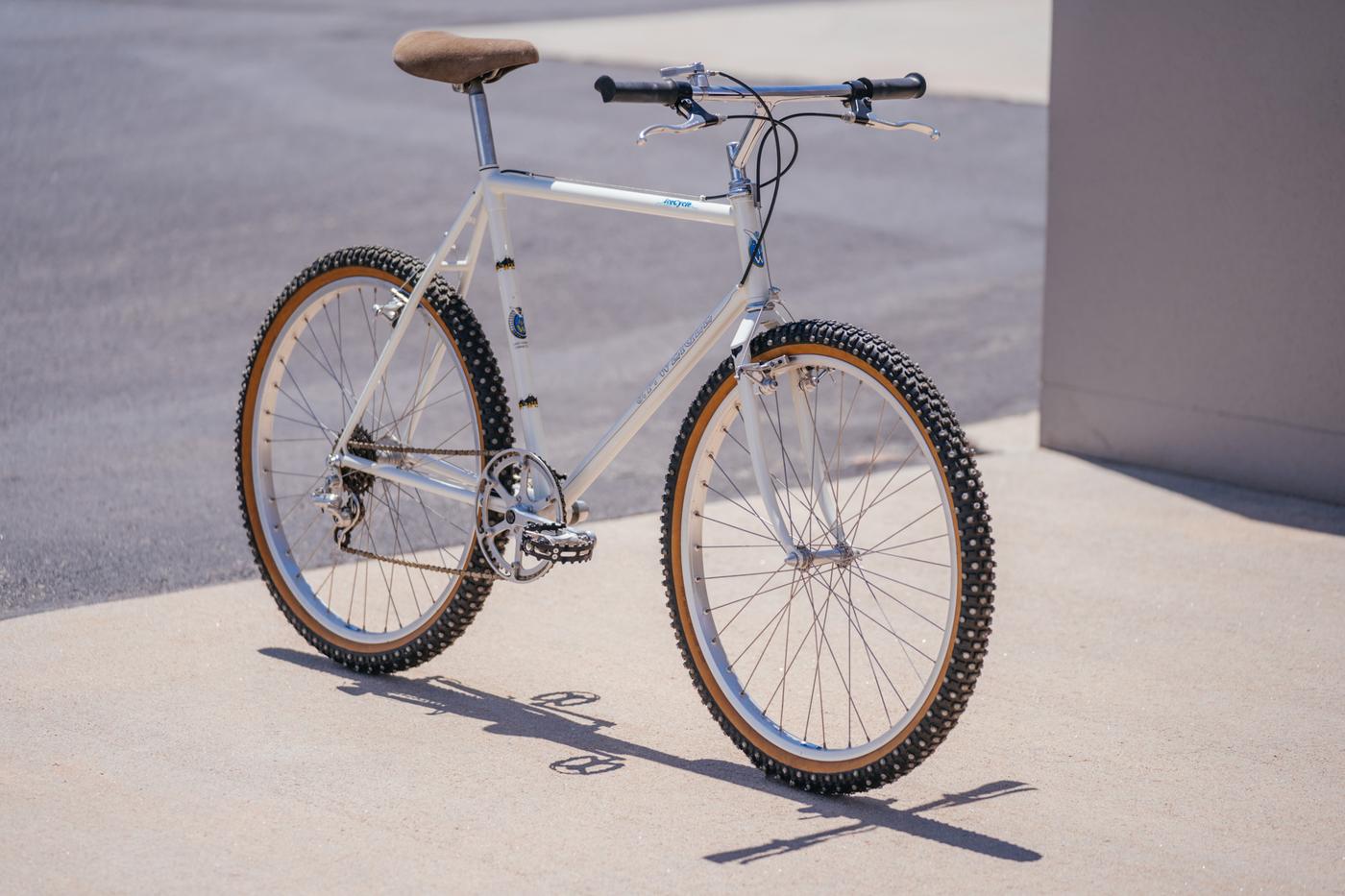 A spare non-studded pair of wheels allowed me to ride the one by bike on gravel roads near my house.

A year or so later I removed the wheels, proprietary parts and put them in storage. The frame was sold to a customer who wanted it set up as a light touring bike. I was able to cut, peel and save the Ice Cycle hand-painted graphics off the frame before stripping the paint. Braze-ons were added for racks, extra bottles, a front derailleur shift boss, etc. The frame was painted an understated anthracite gray. 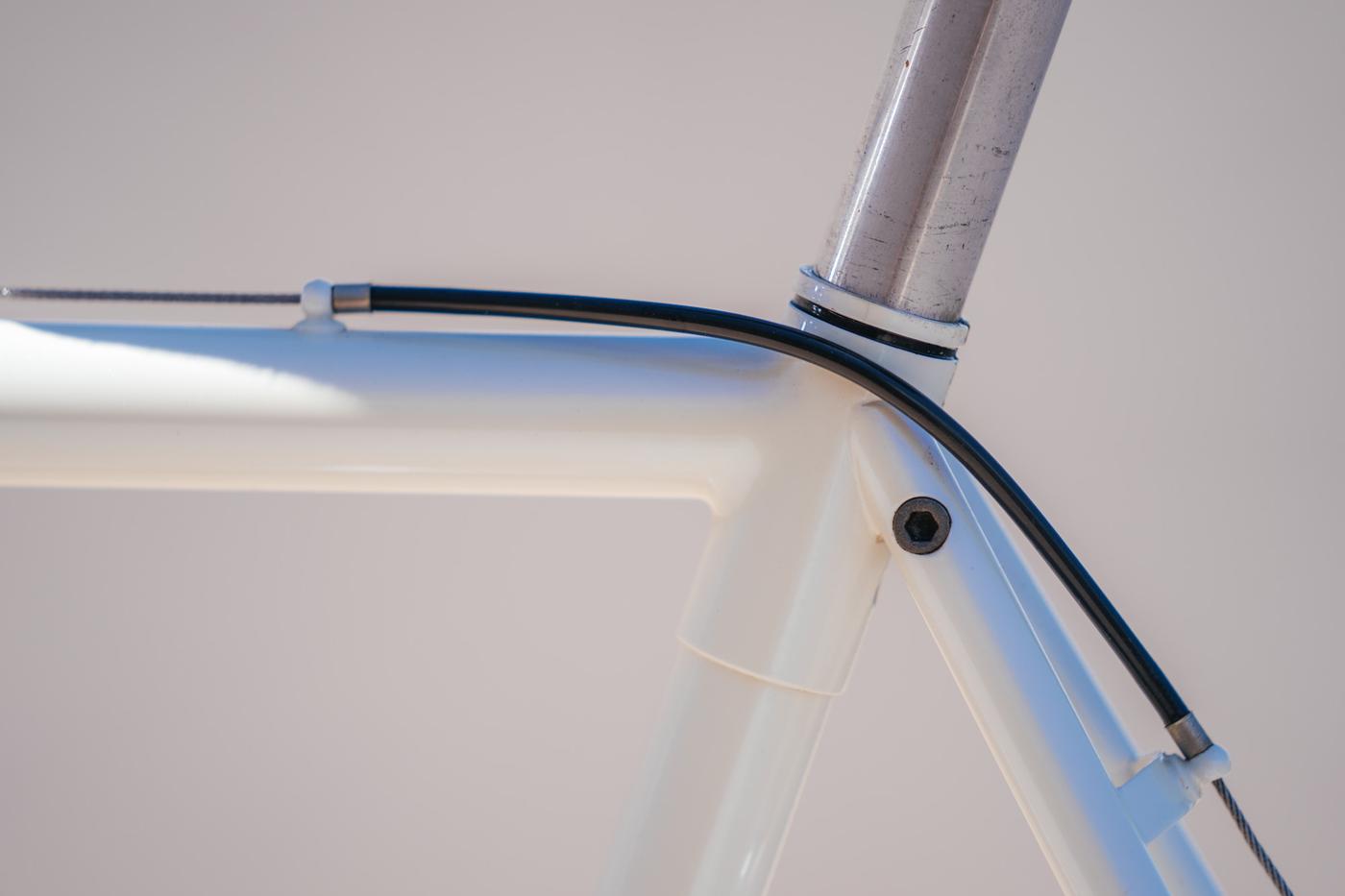 A few years later I bought the bike back, removed all of the braze-ons, and replicated the original paint scheme. The stored parts went back on the frame and the bike was offered to the newly formed Mountain Bike Museum in Crested Butte Co. They accepted it and it was on display until the museum closed, the bike went into storage out there. 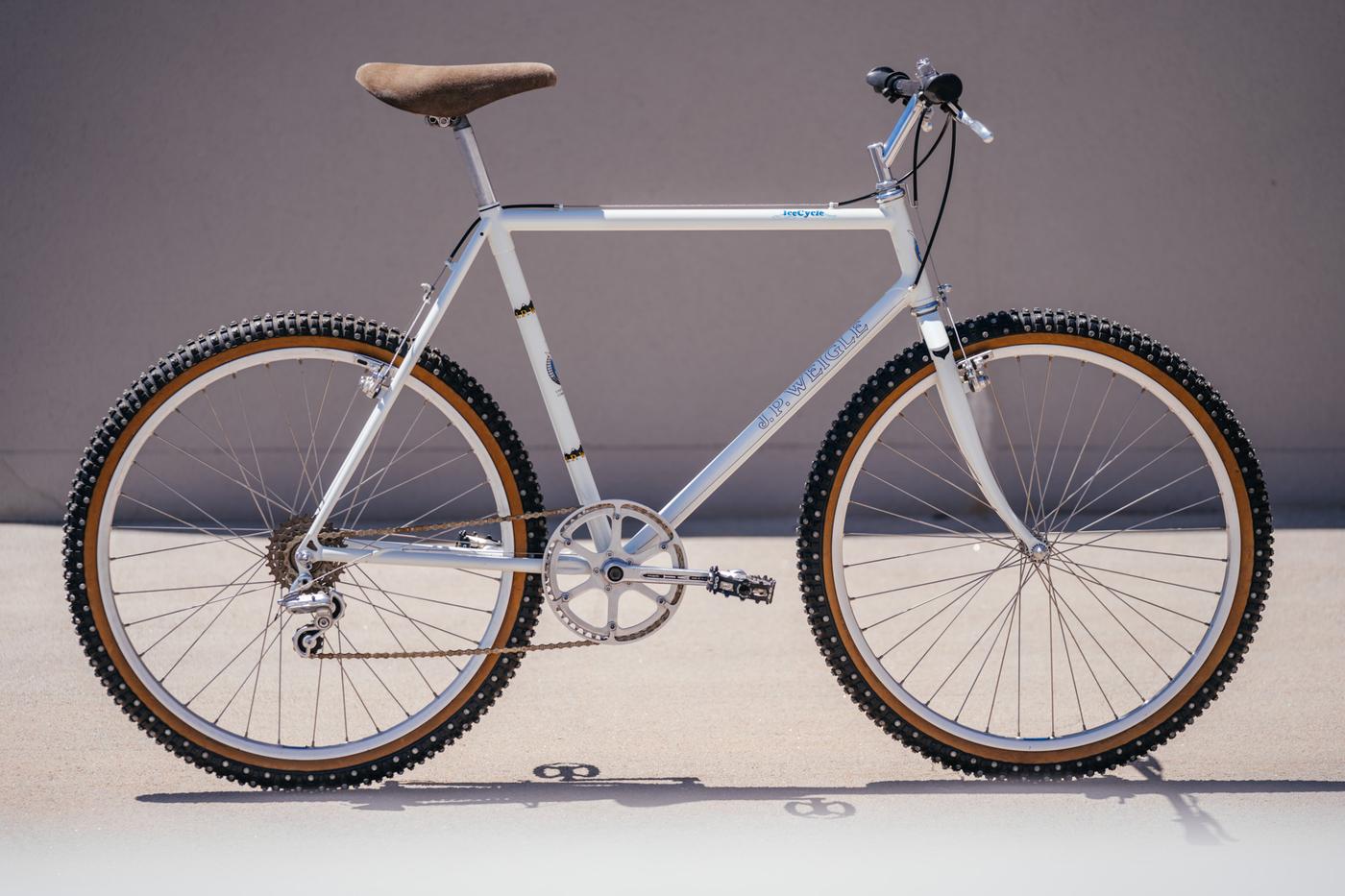 Knowing the bike (he saw it displayed in NY) and realizing it was out of public view, Jeff Archer of First Flight Bikes in NC, asked if I would allow it to go to his shop and be displayed there and on his museum’s website? Seemed to be the best way to once again share the bike with the public eye. The bike was later sold and acquired by the Pro’s Closet for their museum, where it resides today in its current form…

Many thanks to Peter Weigle for the details on this build. I’d also like to thank the Pro’s Closet for letting me scope out their forthcoming museum! If you’re looking for a bike that’s in-stock and shipping immediately, in lightly used condition, with a 30-day no-questions-asked return policy, then check out the Pro’s Closet’s inventory, like their gravel bikes, which updates daily.