In New Mexico, there’s this iconic bumper sticker that says “my other car is in the arroyo” and for some reason, it’s all I could think about while shooting Adam Sklar’s latest build for himself. Maybe it’s the cerakote color he chose for it, which kind of looks like rusty, raw steel. Or it could be that it was so windy when I shot this bike, that I had to seek refuge in an arroyo because the bike wouldn’t stay put on my prop stick.

At any rate, this bike has so many great details, in a very subtle, sleeper package. It’s not every day you see a completely painted titanium bike with a steel fork! Check out more below… 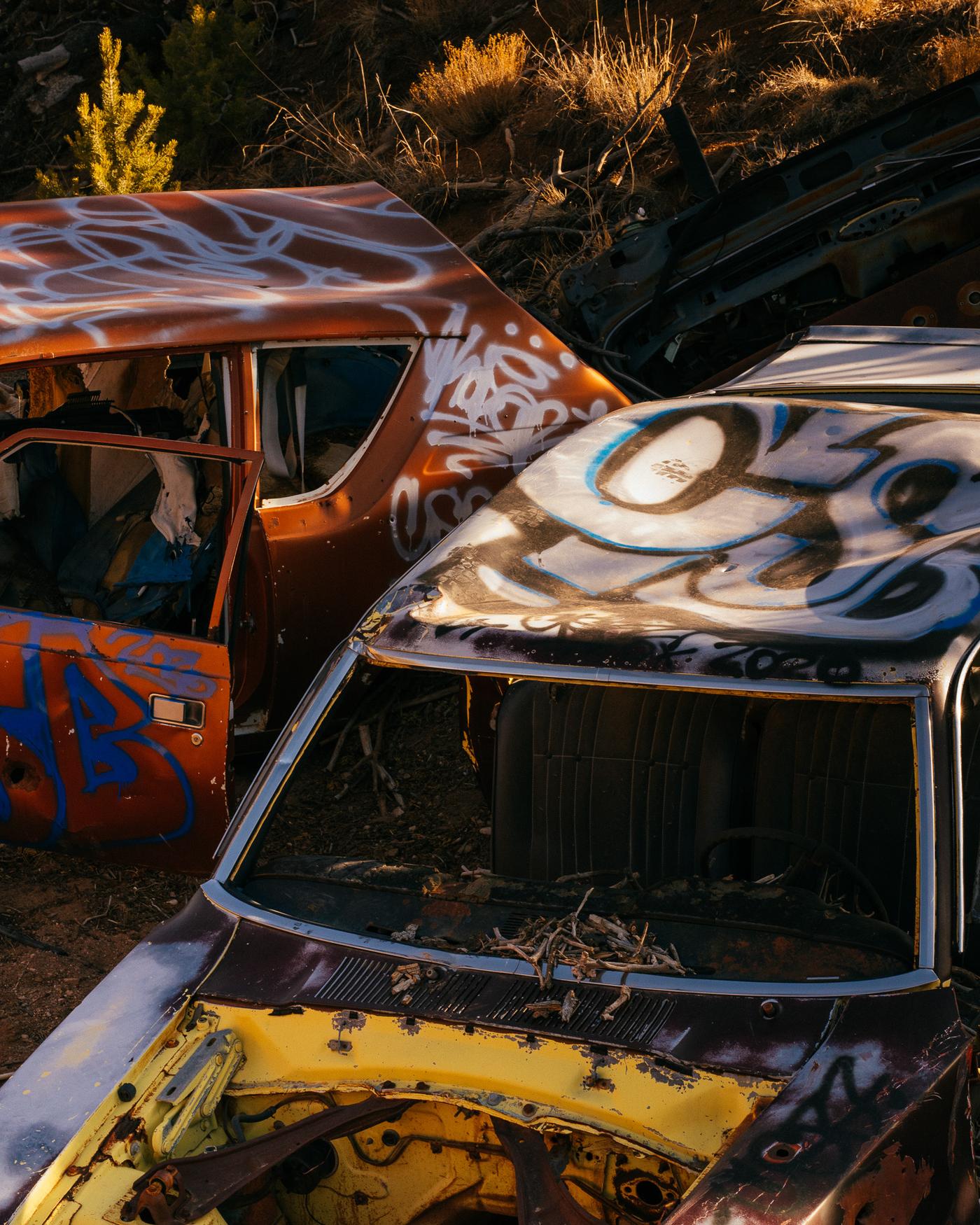 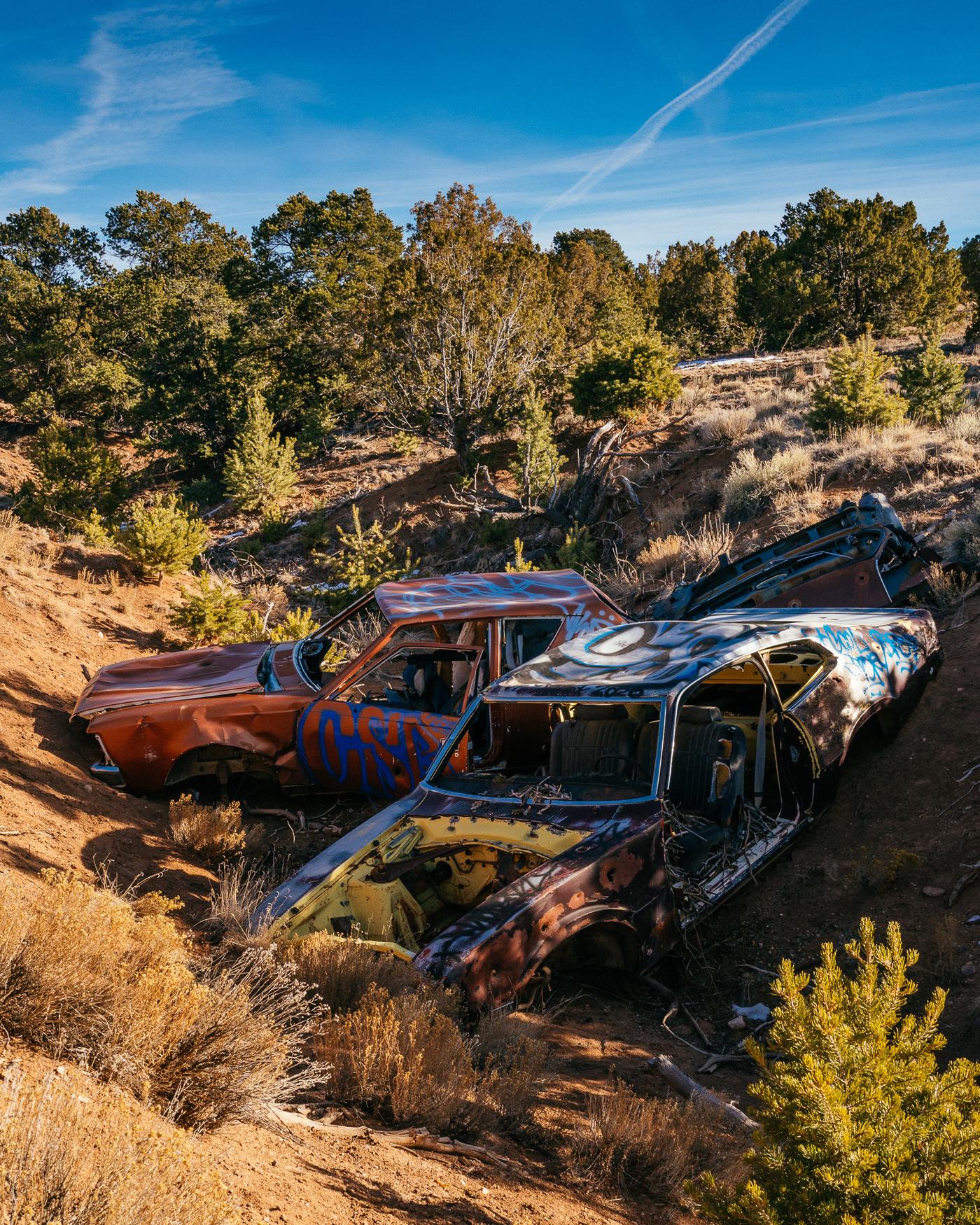 I’ve documented a lot of Sklar Bikes over the years. At Adam’s first NAHBS, I shot one of his show bikes, then it was his single speed he raced at Grinduro the following year, and the list goes on and on. I own two Sklar Bikes; my titanium tourer and a steel gravel bike. Both have taken me on some of my favorite, most memorable rides. Adam and I are buddies and I always feel an obligation to document his personal bikes. When he was in town recently on a family holiday, I made sure to check out what bikes he brought with him.

If you want to see what a builder is up to, or where their headspace is at, check out whatever they’ve built for themselves recently. This one has some interesting details, some of which are new for Sklar. 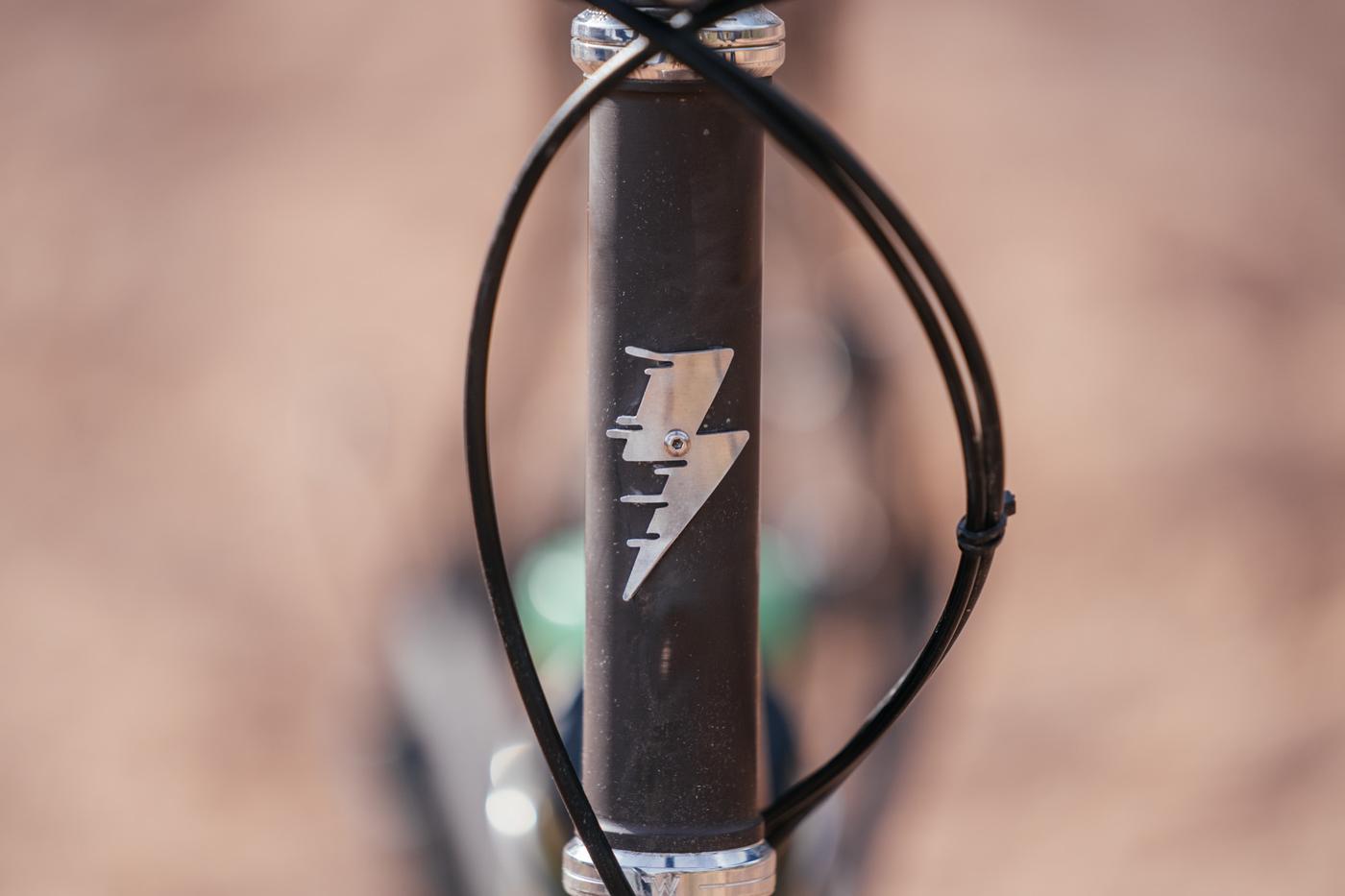 First up is Adam’s new logo, designed by Steve Bretson, co-owner of ALTER Cycles in Bozeman. Steve also designed the “Shred Lightly” logo we use on our Golden Sunrise bottles. While the fast typeface isn’t a new thing, Steve’s touch on this iconic style really stood out to me when he first showed me the branding package he designed for Sklar Bikes when Adam first launched the brand. These new head badges feature the Sklar lightning bolt with a few speed blur stripes. As you can see, Adam’s got a bit beat up on a recent bike tour. 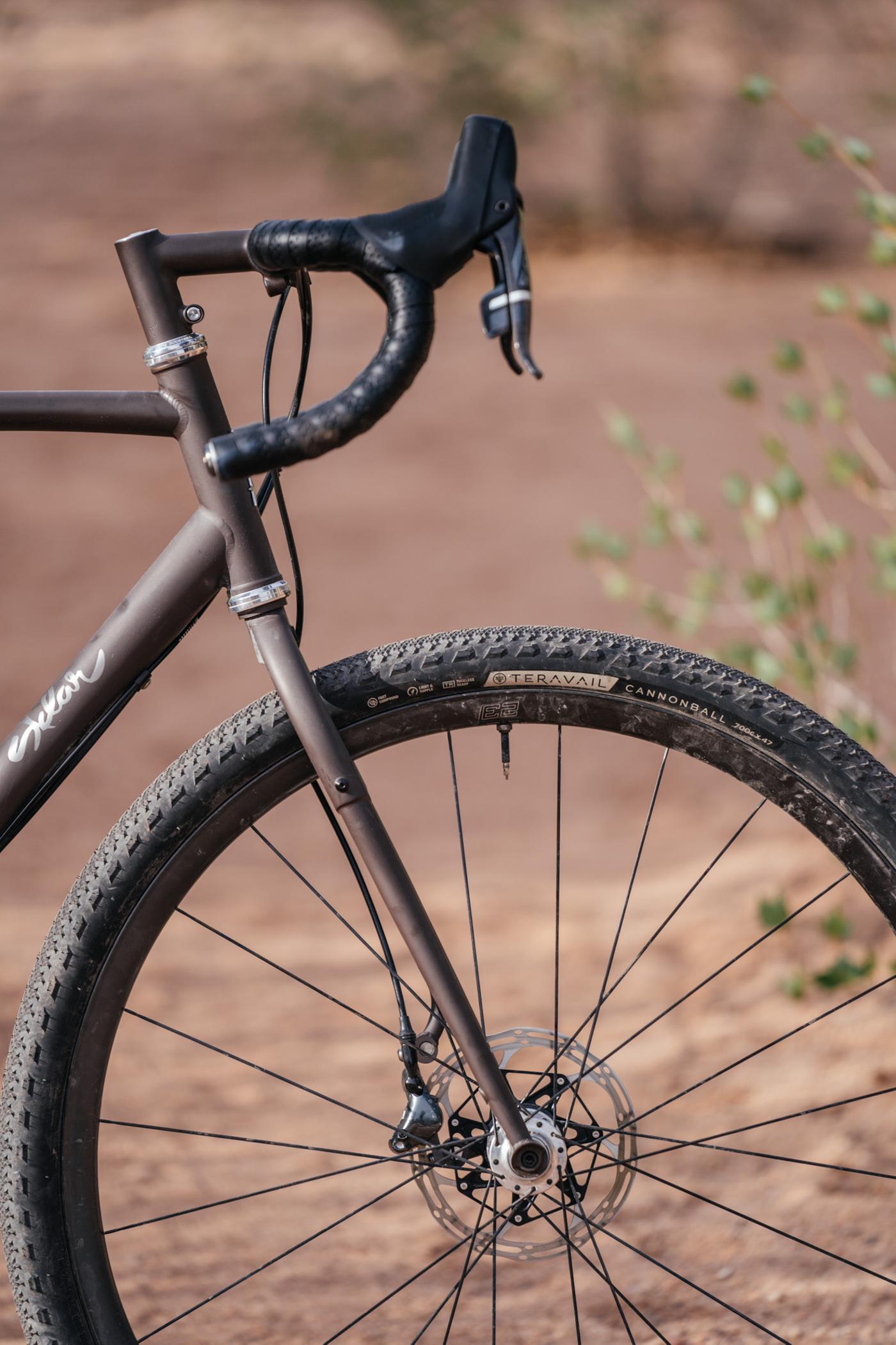 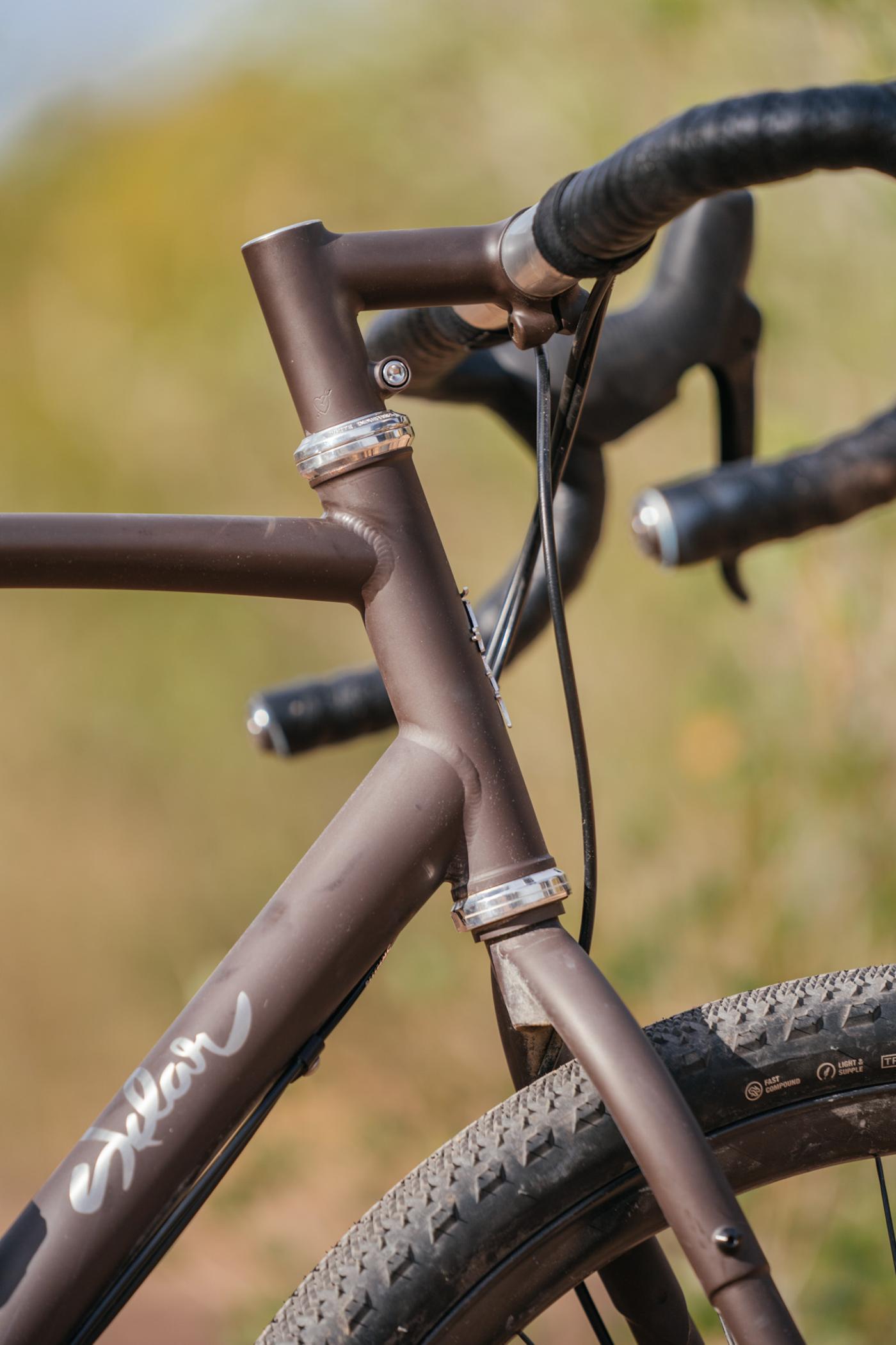 As you probably noticed, this bike features a 1 1/8″ head tube with a matching fork. No tapered or 44mm head tube here! This really pulls the proportions of the whole front-center of the bike back, giving it that classic look. The cerakoted-to-match Sim Works stem and sleeved unicrown fork made from tandem chain stay tubing completes the package. 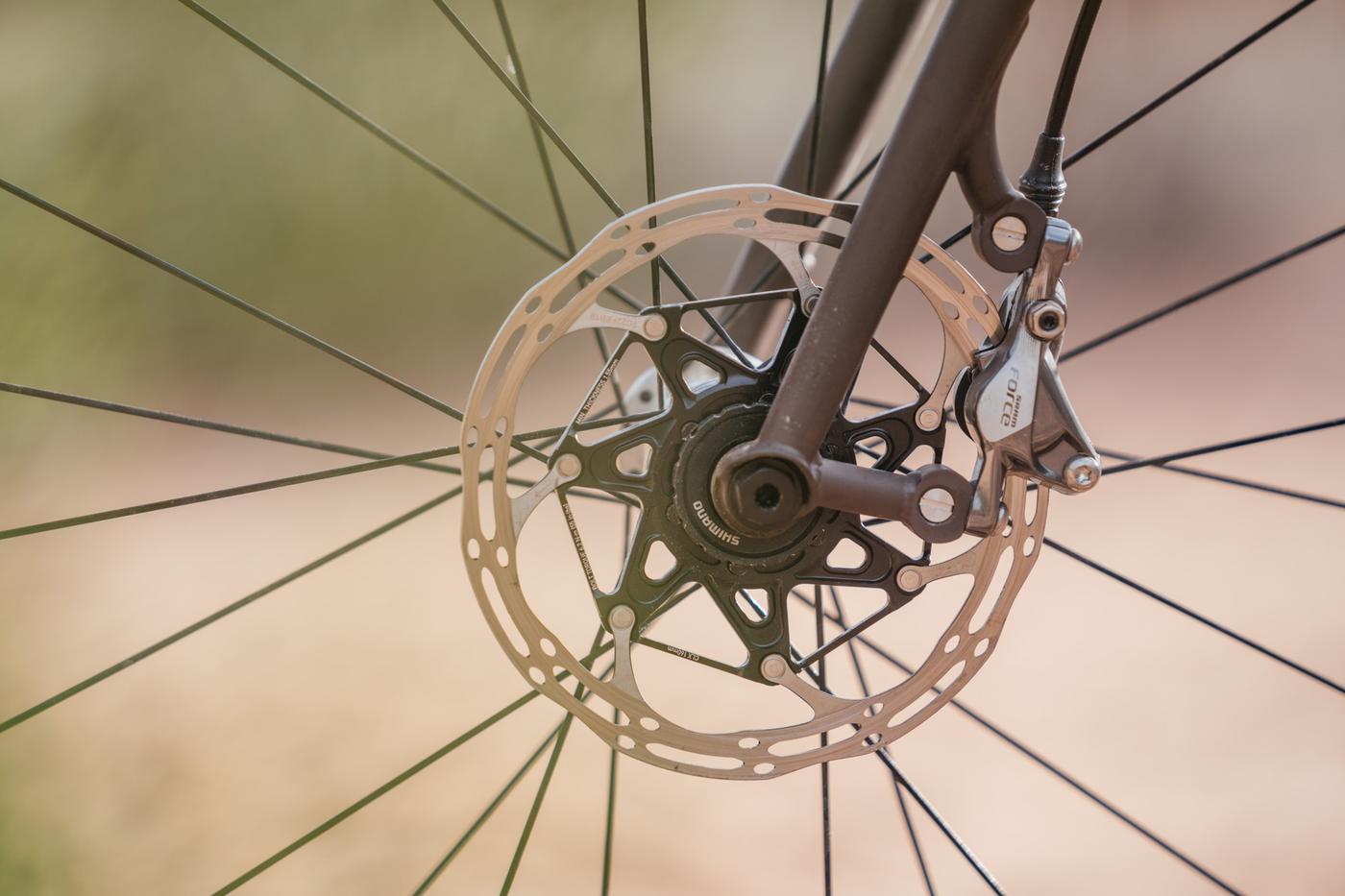 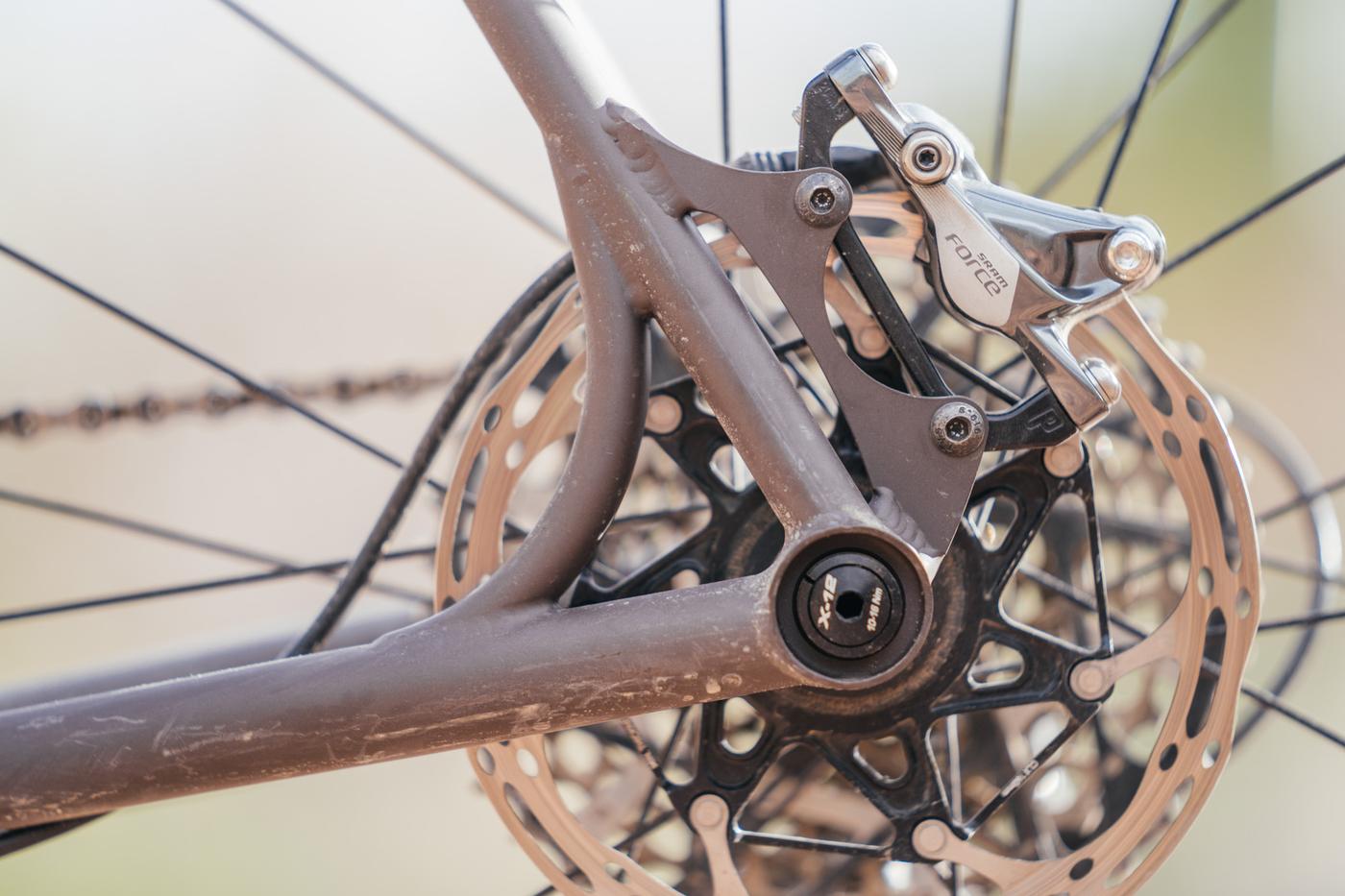 These days, most gravel and road bikes feature those pesky flat-mount brakes. Ok, that’s harsh. A lot of people love flat-mount brakes and while they look great on disc road bikes, I often feel that they’re out of place on an off-road machine. There’s something about post mount and IS brakes that just look so good on a gravel or mountain bike. They’re easy to adapt to bigger rotors, don’t suffer from overheating as bad, and are much easier to adjust in the field, ATMO. Adam’s been pretty vocal about not liking them and so it would make sense his personal bike would have post mount / IS brakes. 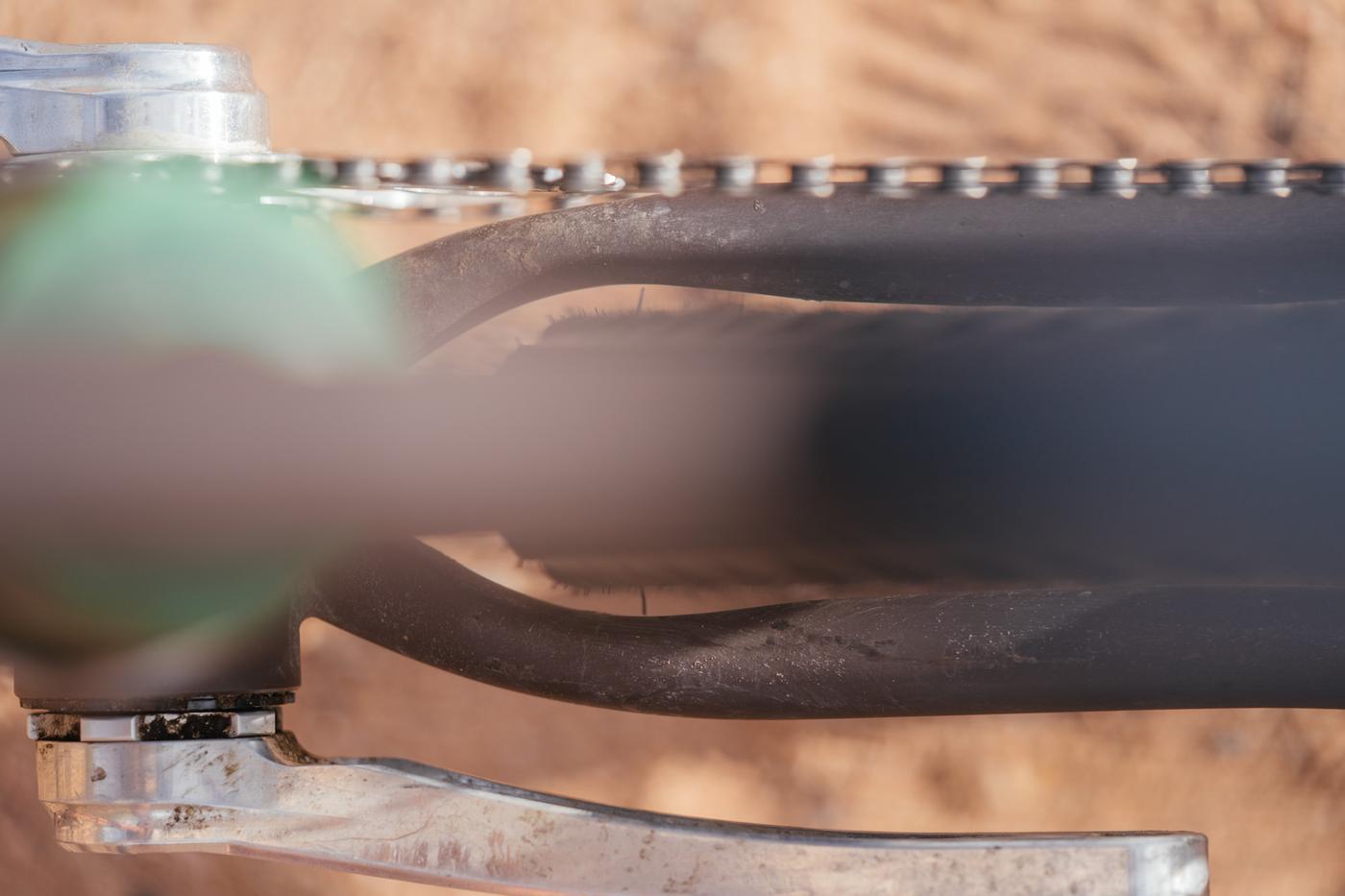 The tire clearance is plentiful, without being overkill. The Teravail Cannonball 47mm tires fit nicely within the chainstays and fork crown. While people love big, chunky tires on drop bar bikes, they can be cumbersome in a lot of terrains. A good-n-supple, fast-rolling gravel tire gets it done and while you might want a little more meat when descending rough doubletrack, there’s something nice about a mid-size gravel tire and its razor-like precision. 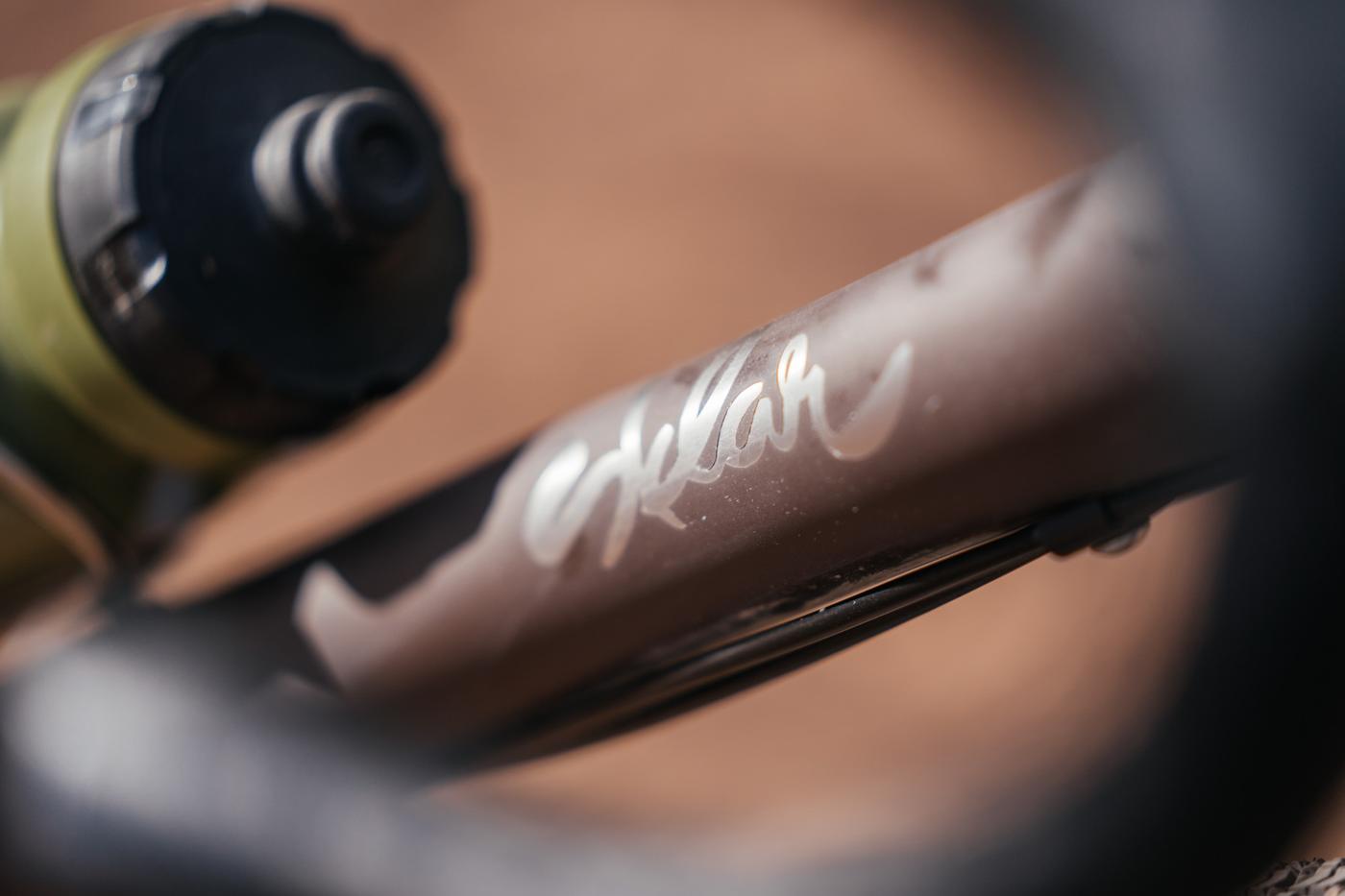 The cerakoted titanium frame was done in Bozeman by Adam’s local finishing shop. He joked that his shop “gets it done” but isn’t as detail-oriented as other cerakote shops like Black Magic Paint. “He still puts the logos a little too high on the downtube…” Adam joked. Personally, I love the look of painted titanium bikes, especially when it’s cerakote. The matte lustre, the feel, and the beausage just look so on-point for off-road machines. 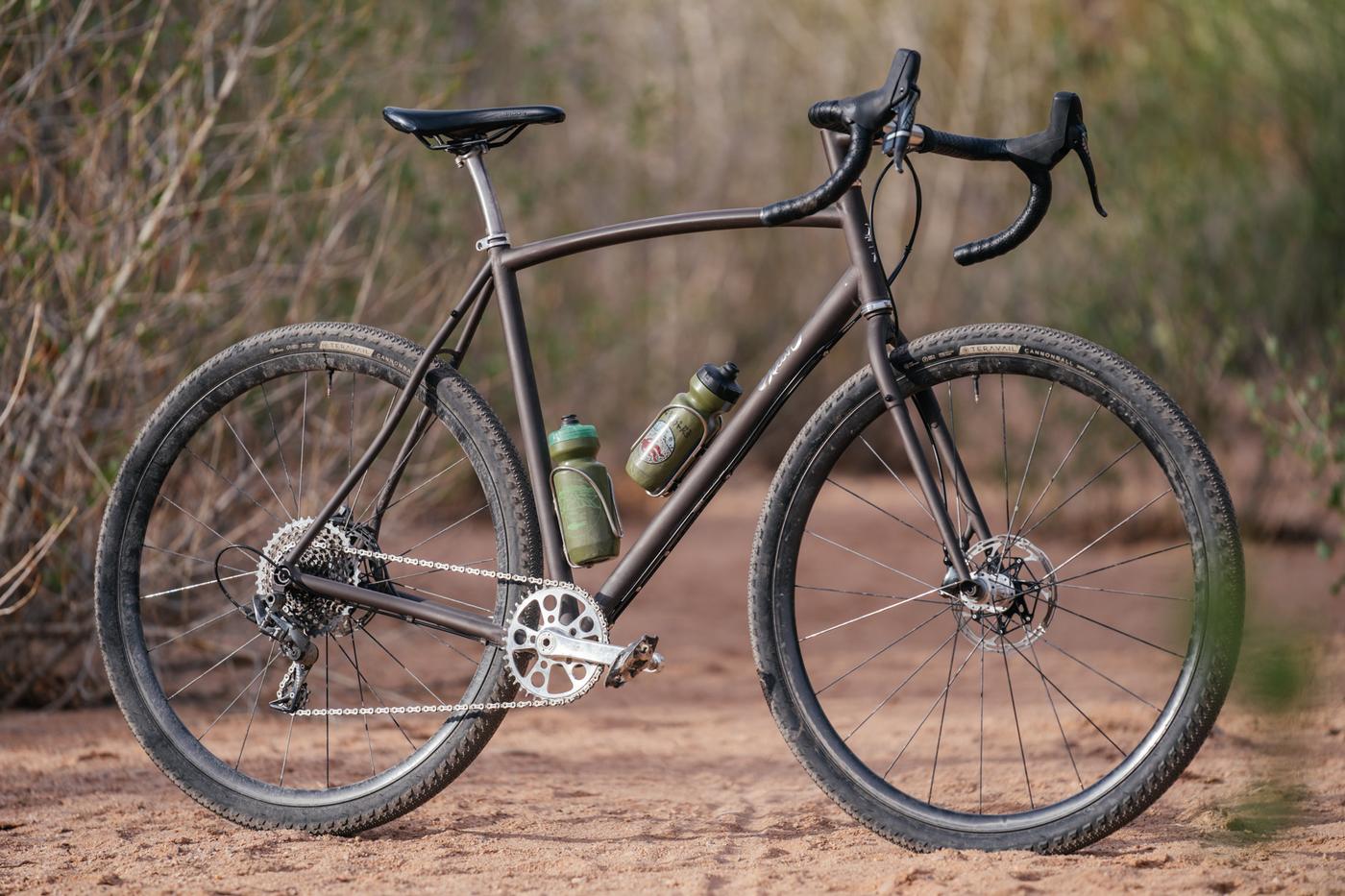 Overall, this bike looks damn good sitting in my neighborhood arroyo… What’s your favorite detail on this one?