Why Cycles and Revel Bikes Warehouse 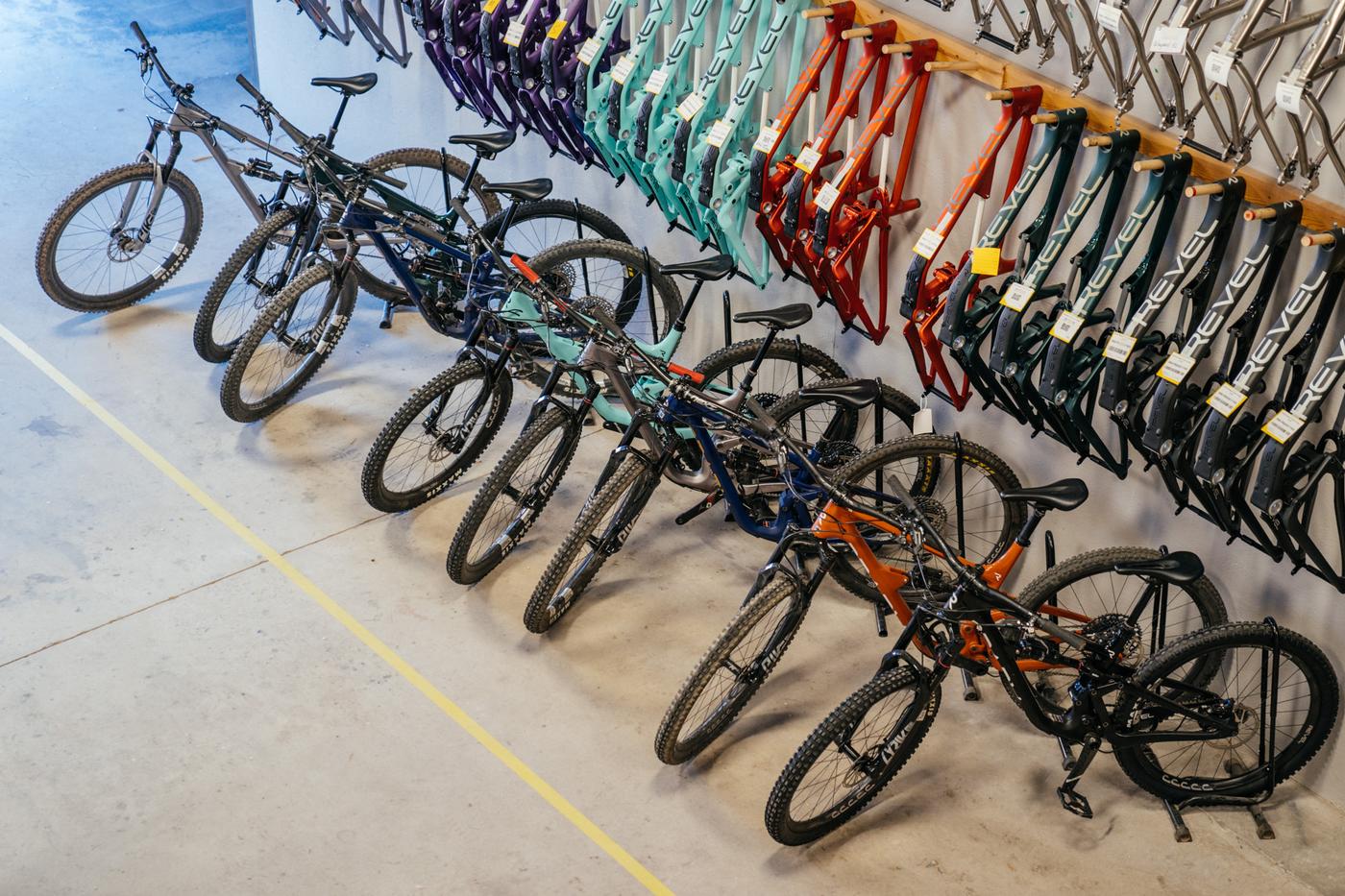 Why Cycles and Revel Bikes

These days, there is a lot of polarization in mountain biking, and it was a constant theme in our discussions over the weekend. Why is it that hardtail or rigid bikes are so underrepresented in mountain bike media? Why is it that mountain bike’s public image is one of speed, berm scralping, and full-face helmets? There’s an imbalance between the current state of mountain biking and its roots. Is there an in-between, a compromise of sorts, or is this the new normal for the sport? Will speed be replaced by the experience, shuttling replaced by climbing, and so forth?

Many of these questions don’t have clear-cut answers but the fact that these brands are asking them is a good sign. 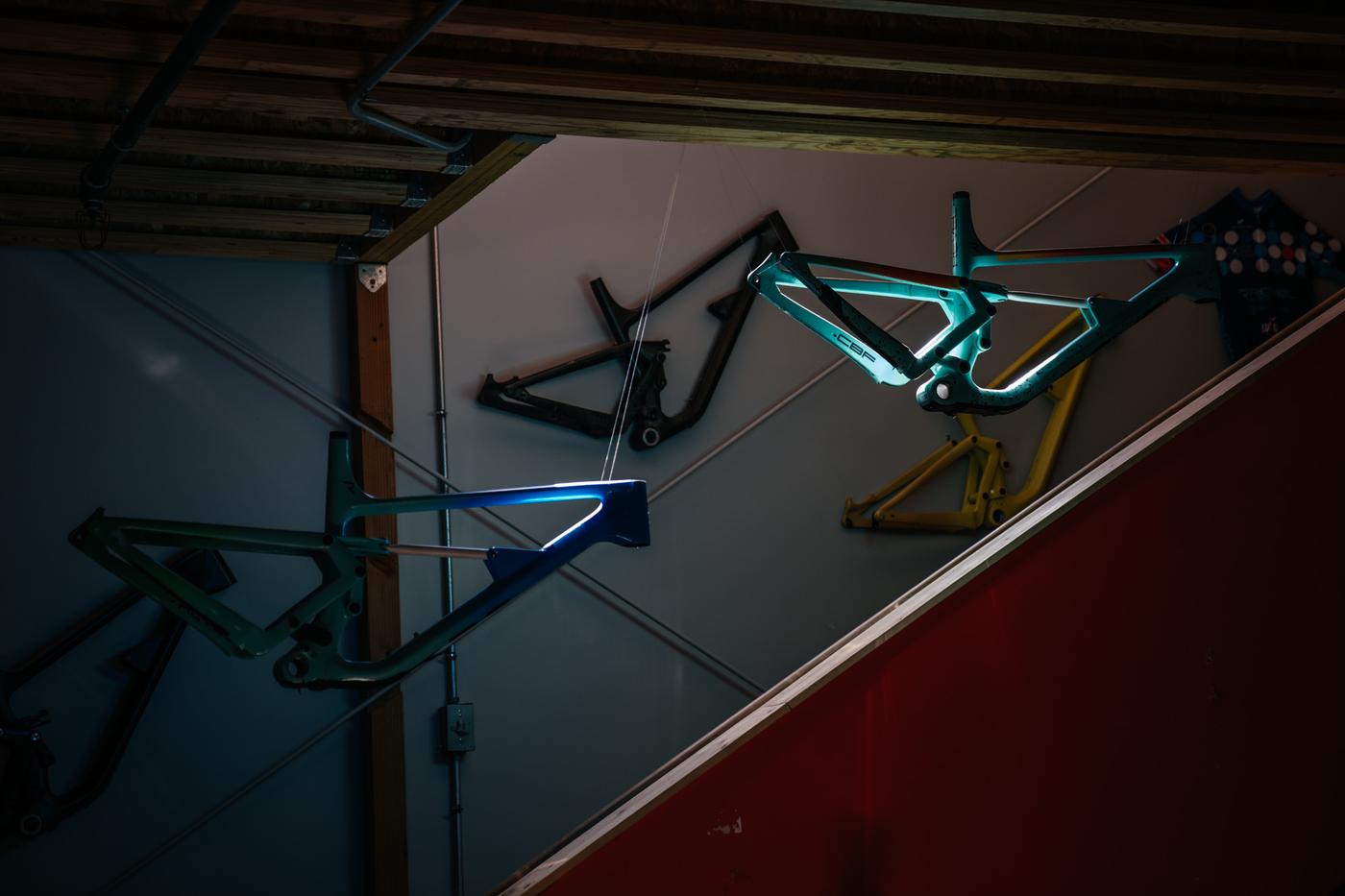 I’m fascinated by the modus operandi of Why and Revel, both of which were founded by Adam Miller, from Alaska, who sold his previous company, Borealis, in 2015 to then go on to launch Why Cycles that same year and Revel Bikes in 2016. Since then, the company has grown from a couple of guys sleeping on cardboard in a warehouse (not kidding) to a bustlin’ company with 21 employees who, against all odds, and a supply-chain halting, global pandemic has been so busy that they’ve barely stopped spinning. 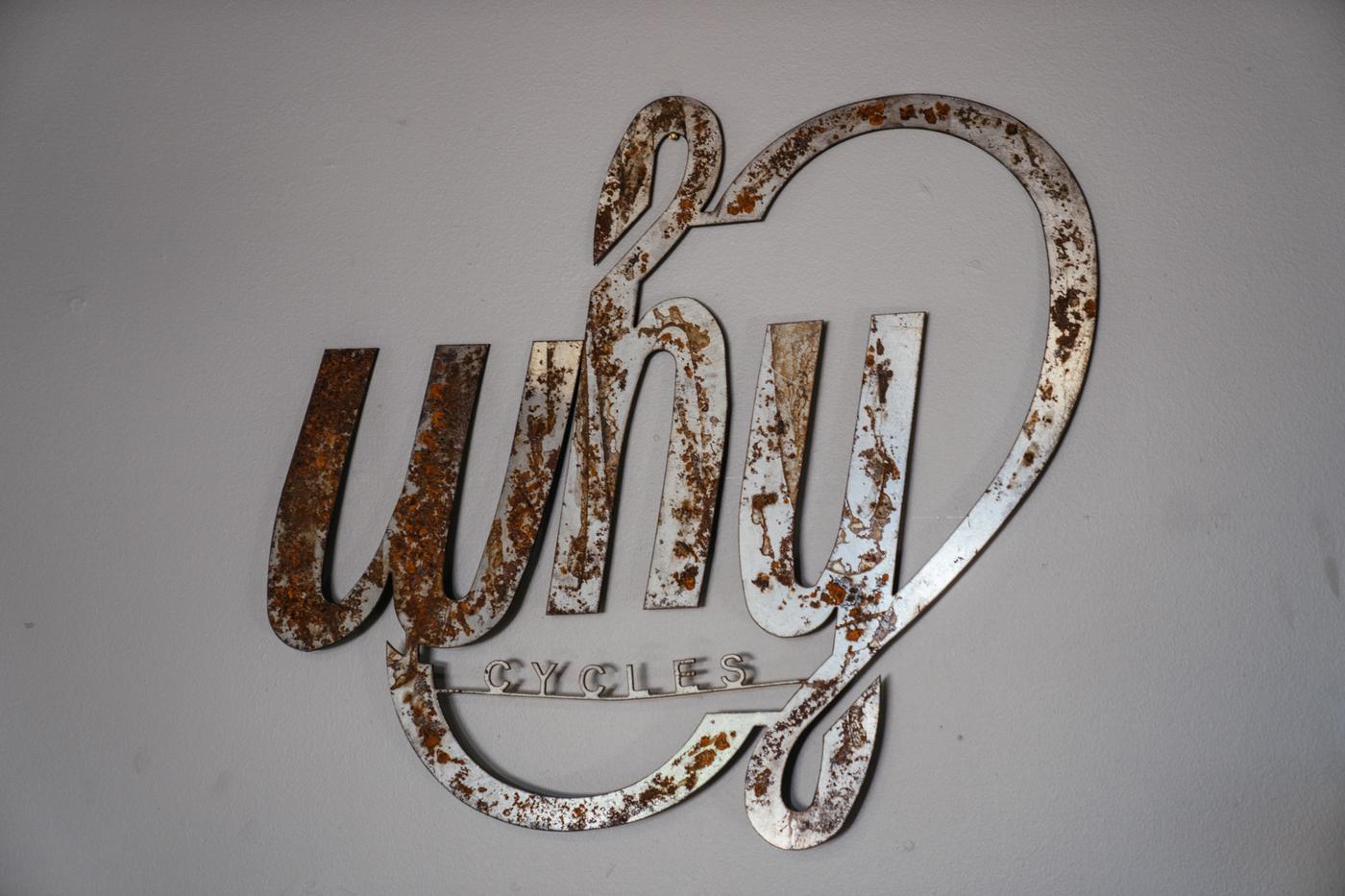 Then, on top of all the normal day-to-day challenges small companies face, Covid hit, sending the entire cycling industry into turmoil. Suddenly, the idea that it could all go under became a reality and if it weren’t for a few Hail Marys, Why and Revel might not be here today.

Backtracking a bit, when Adam began Why Cycles, the move felt like the next obvious step from Borealis. Fat bikes couldn’t feasibly float an entire company for years to come, yet they weren’t exactly going anywhere. Adam loved riding them, he is from Alaska after all, but he wanted to make more than just 5″ tire bikes for riding in snow. Why launched and eventually, its catalog is now filled with a few hardtails, some gravel bikes, and even a fatbike. Rigid and hardtail bikes are so simple and make for perfect tourers and everyday riders. With gravel’s popularity, Why’s gravel lineup has been received with accolades and continues to be a success. 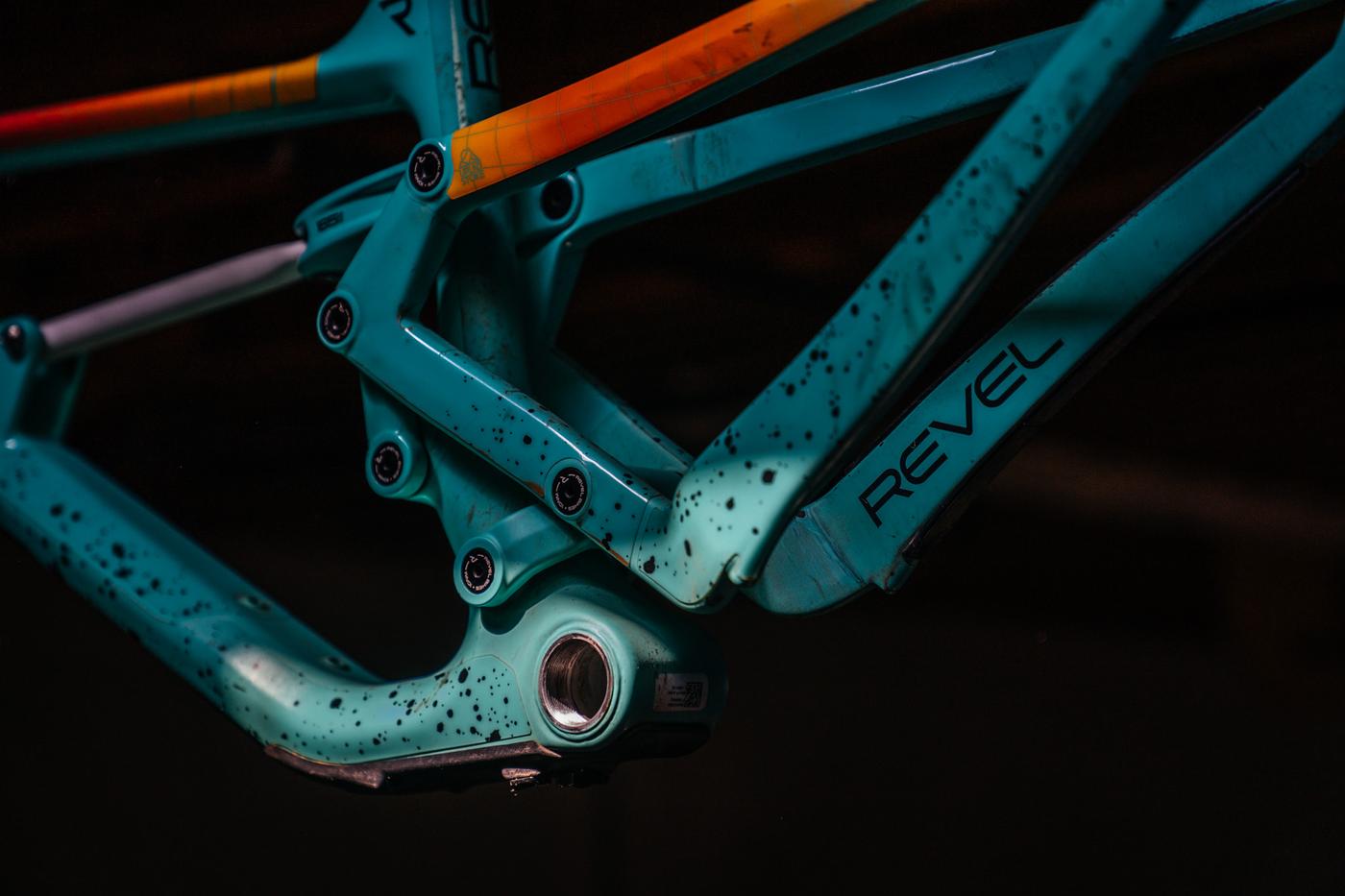 With Why underway and building momentum, Adam shifted gears to another one of his long-time wishes: to make full-suspension mountain bikes. As you can imagine, to do this from scratch takes a lot of planning, especially when it comes to the linkage design. There are many patents floating around, used by any number of brands, but Adam and his team weren’t overly impressed with any of them. That was until they approached Chris Canfield.

The team at the soon-to-be-formed Revel really admired the work that Canfield has put in and loved the Canfield linkage, so Revel came to them with a proposal; they would license their patent and put it to work immediately. When they had a working prototype, they let Chris Canfield ride one of their bikes, to which he immediately gave it his stamp of approval. All Revel full suspensions use this patented Canfield Balanced Formula. For more on their technologies, check out this extensive article.

Why and Revel live under the same roof in Carbondale, Colorado, a veritable paradise for all things outdoors and I got to sample some of the fun right out of the shop this past weekend… 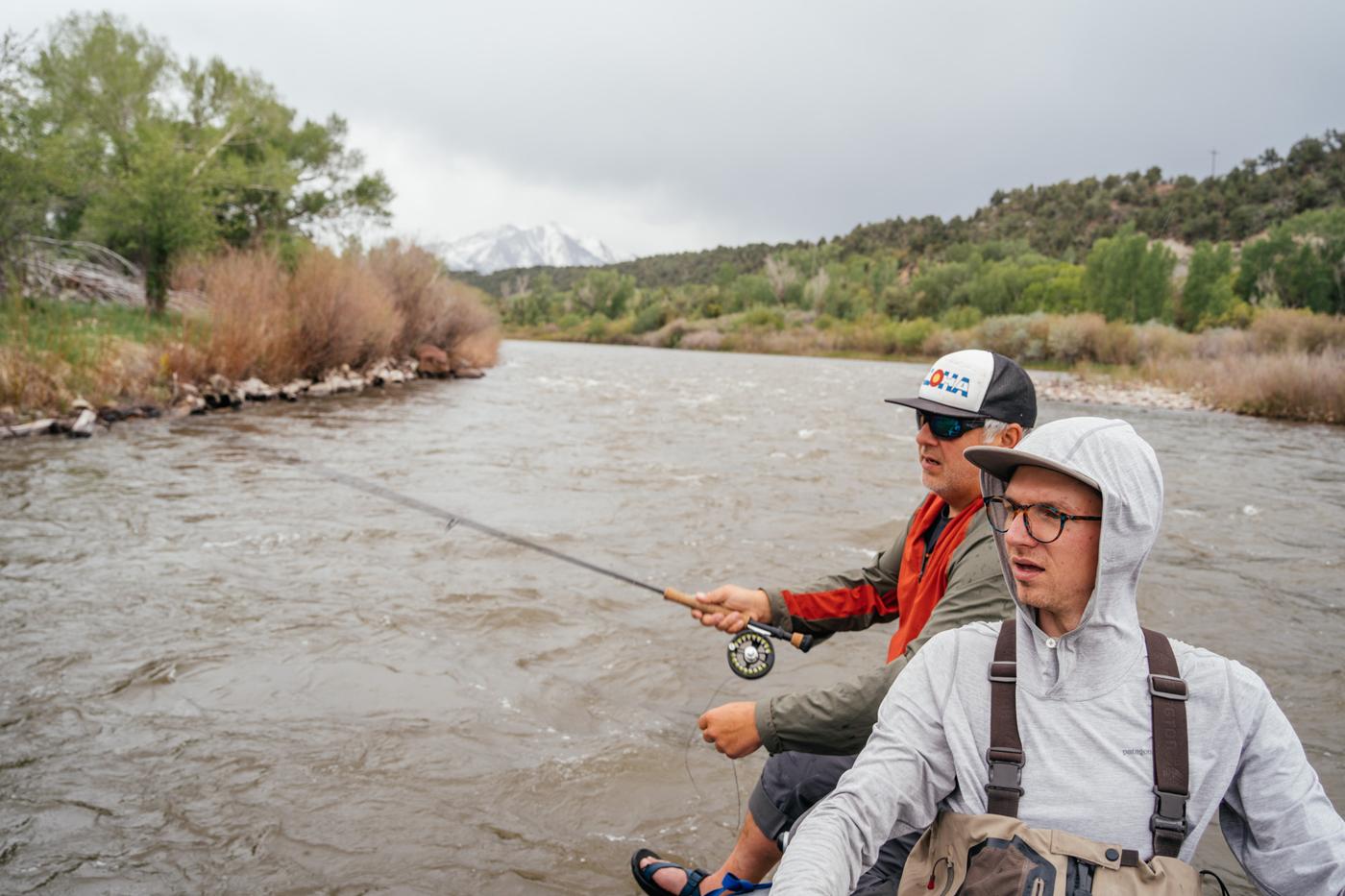 When the opportunity arises, the team at Revel likes to take off around 2 pm on Friday and float the Roaring Fork River. Last Friday, I rolled into town just in time to partake in this activity as a special guest. I say special because the name of the game that day was throwing streamers with fly rods and I haven’t spent any time doing so. In my defense, most of our fishable “rivers” in New Mexico are mere creeks by most states’ standards and I don’t exactly have a riverboat. Luckily, one of the employees at Revel, a fellow named Christian, is an excellent angler, and between him and Chris Reichel, Revel’s marketing aficionado, I quickly began to get the hang of this unique form of fly fishing. After a few excellent hours out on the river, Chris landed a big, fat brown. A few minutes later, I landed one too. With the CFS high and the water silty, the conditions were less than ideal. Quickly, the theme of the weekend was formed but with one more essential part to the equation necessary: bikes! 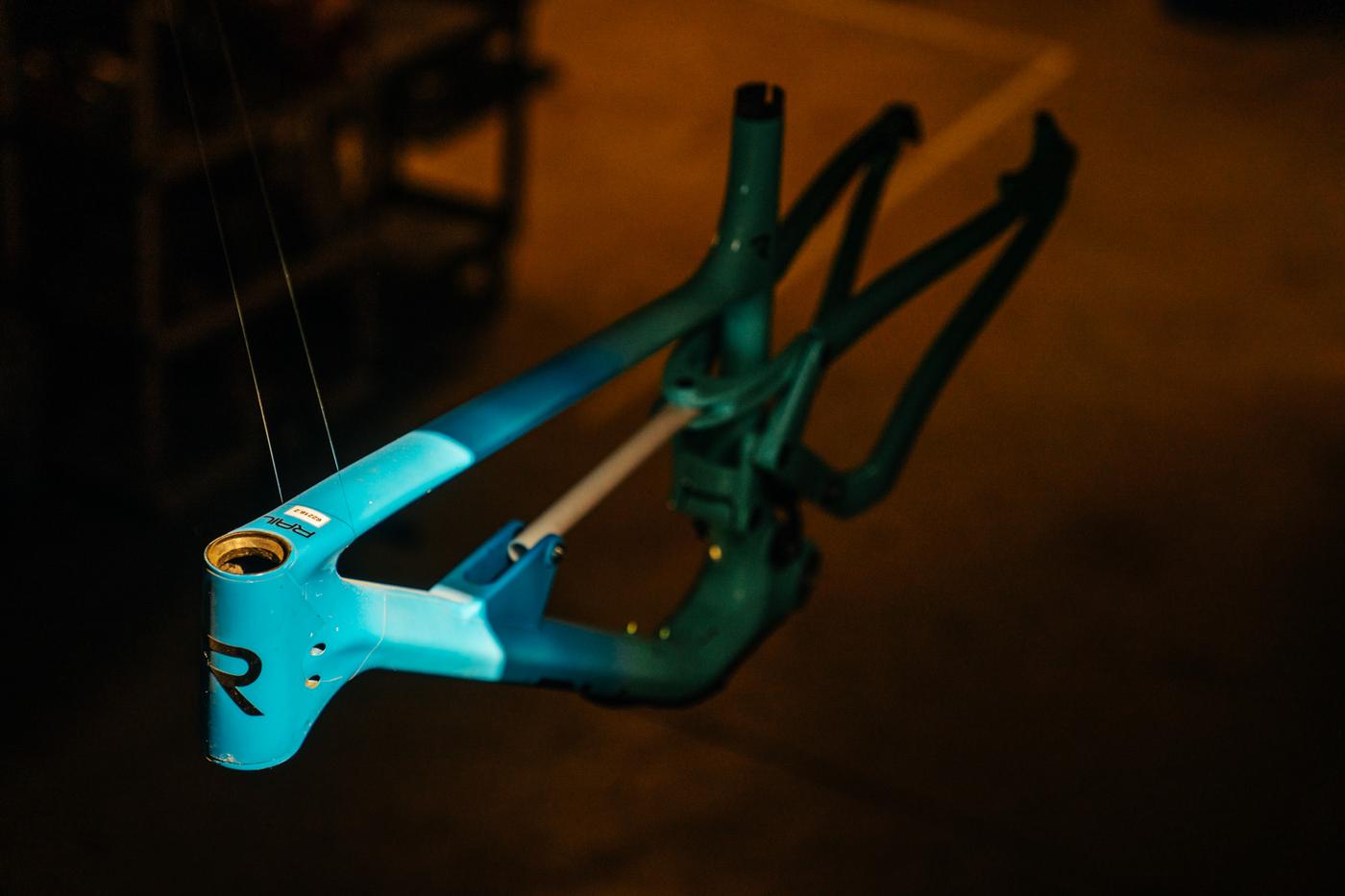 Fishing is fun and all but I know why people come to this website and one of those reasons is bikes! Maybe? I think so, anyway. When I visit a shop or a company, I love shooting its employee’s bikes. There’s something insightful with the builds and it brings a real human connection to the bikes, something not easily attained while looking at brand new showroom models, so I managed to document a few, which I’ll touch on here. Cullen’s R+ V3 titanium all-road was a no-brainer to document. He works in Production at Why Cycles and built this bike up to log miles while keeping it nimble and capable. The build is flashy but with a touch of class. I think everyone would agree this falls within the dream bike category when it comes to all-road bikes. Adam’s Revel Rascal was another that jumped out to me with its bright and sparkly purple paint job, coated in a fine layer of dust, and its silver Push Industries ElevenSix HyperCoil shock. Meaty tires, X01, with an XX1 Eagle “oil slick” cassette and some meaty tires put this bike in a category all its own. 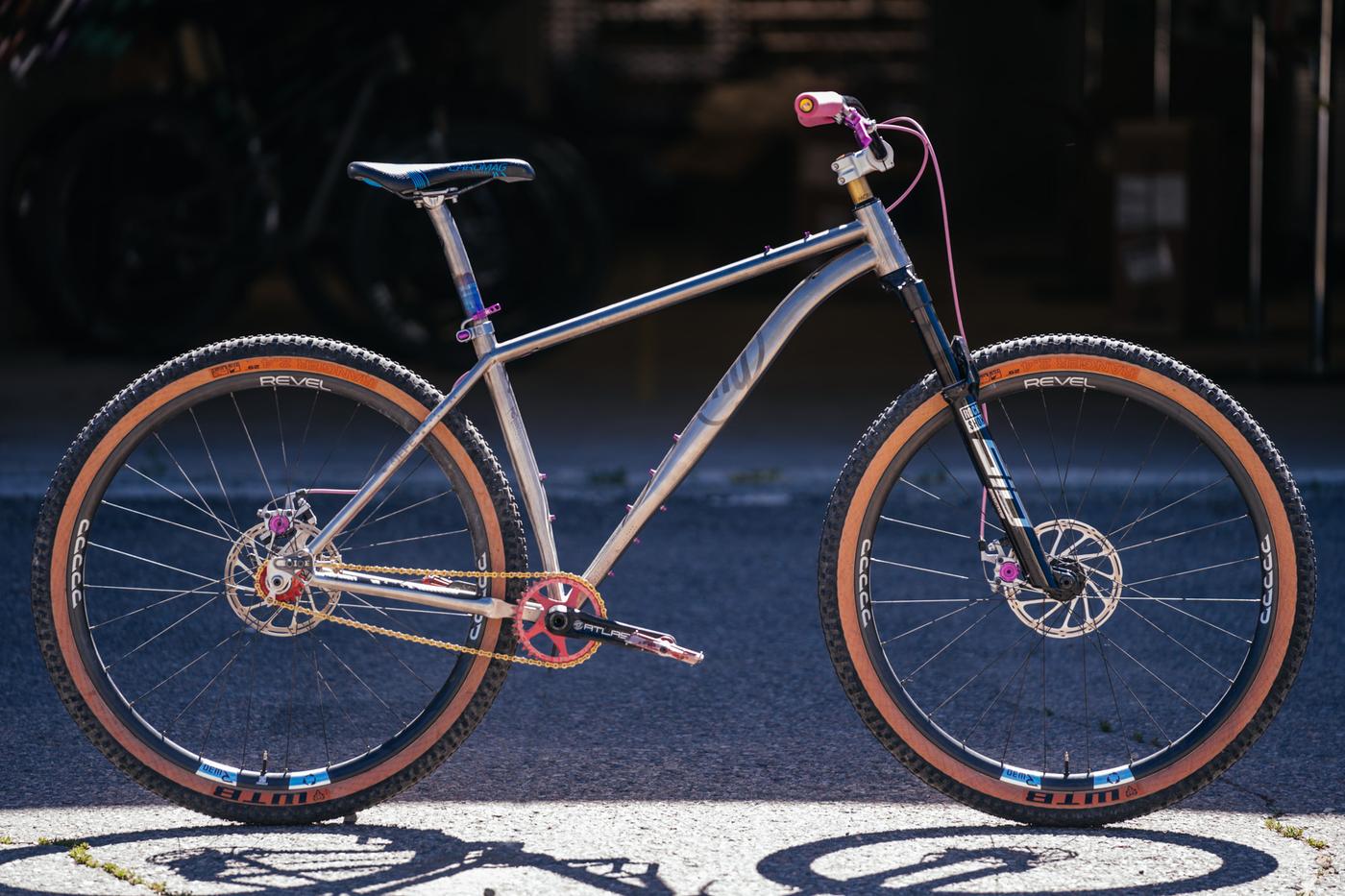 Matt works in Dealer Sales and this is his insane Why El Jefe singlespeed 29er. Look, this build has so many insane details, so you won’t find them in this gallery. Check back at a later date for the full spread… 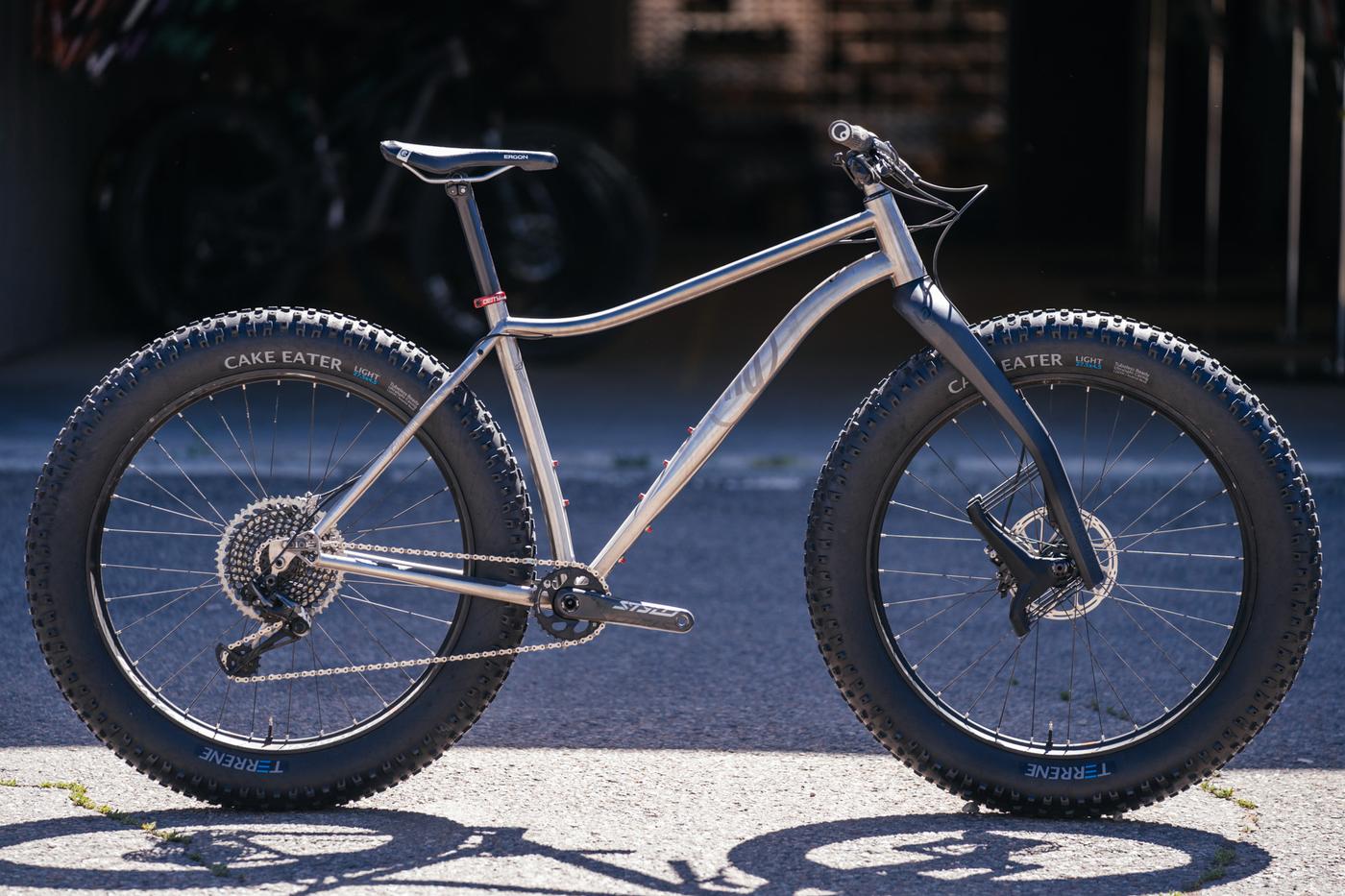 As a special bonus, this Big Iron fatbike with a Lauf fork and an ultralight build kit gets a standing ovation over here. Who doesn’t want to load this thing up and head off for a day in the mountains in the middle of winter? 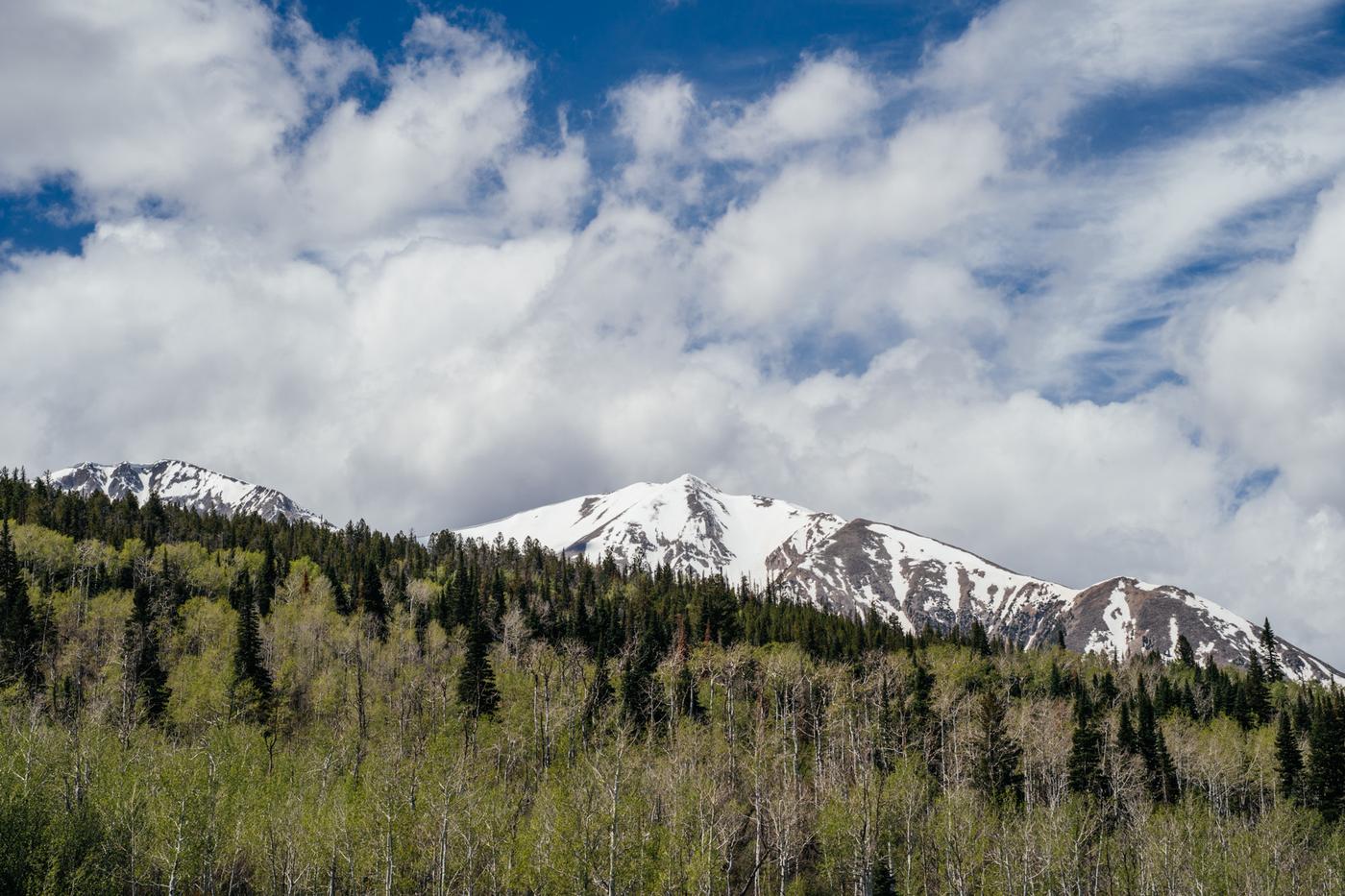 Speaking of winter, after documenting a few bikes, we planned on pedaling up to an alpine lake, over by Sopris Mountain, the twin-peak that towers above Carbondale. Chris Reichel had quite the afternoon planned. We’d park halfway up the mountain, load our fly fishing gear onto our packs, and pedal as far as we could to an alpine lake, where, finger’s crossed, the ice might be melted enough to hopper/dropper our way to landing some fish. 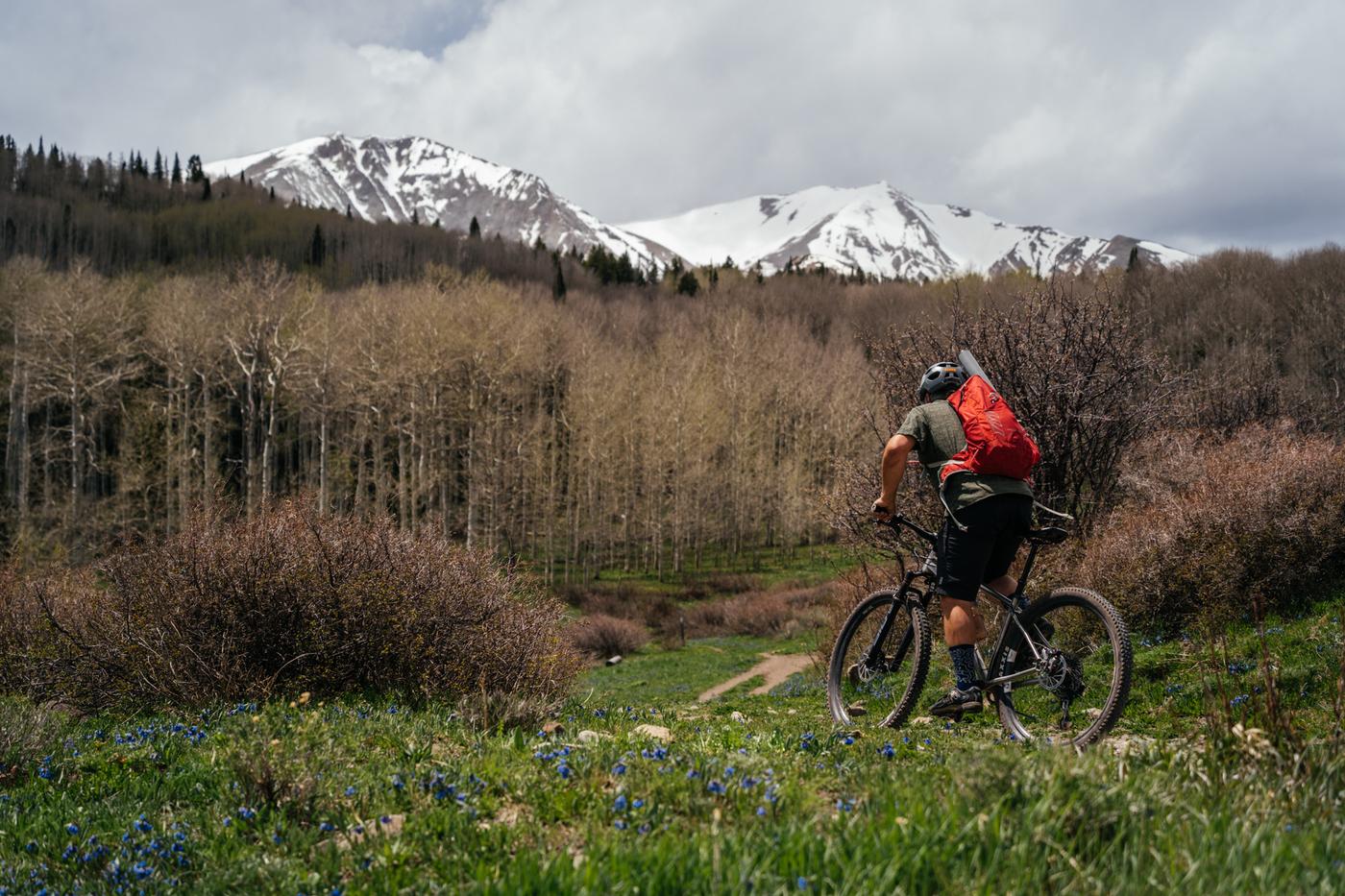 Living at 7,000′, I’m no longer weary of these high-altitude endeavors. Whereas before, the mere thought of pedaling up that high filled my lungs with anticipation and my brain with uncertainty. These steep trails weren’t cut with bikes in mind, rather heavy industrial mining equipment, and currently, I rely on my legs, lungs, and heart to propel me up these steep, bench cut mining roads. 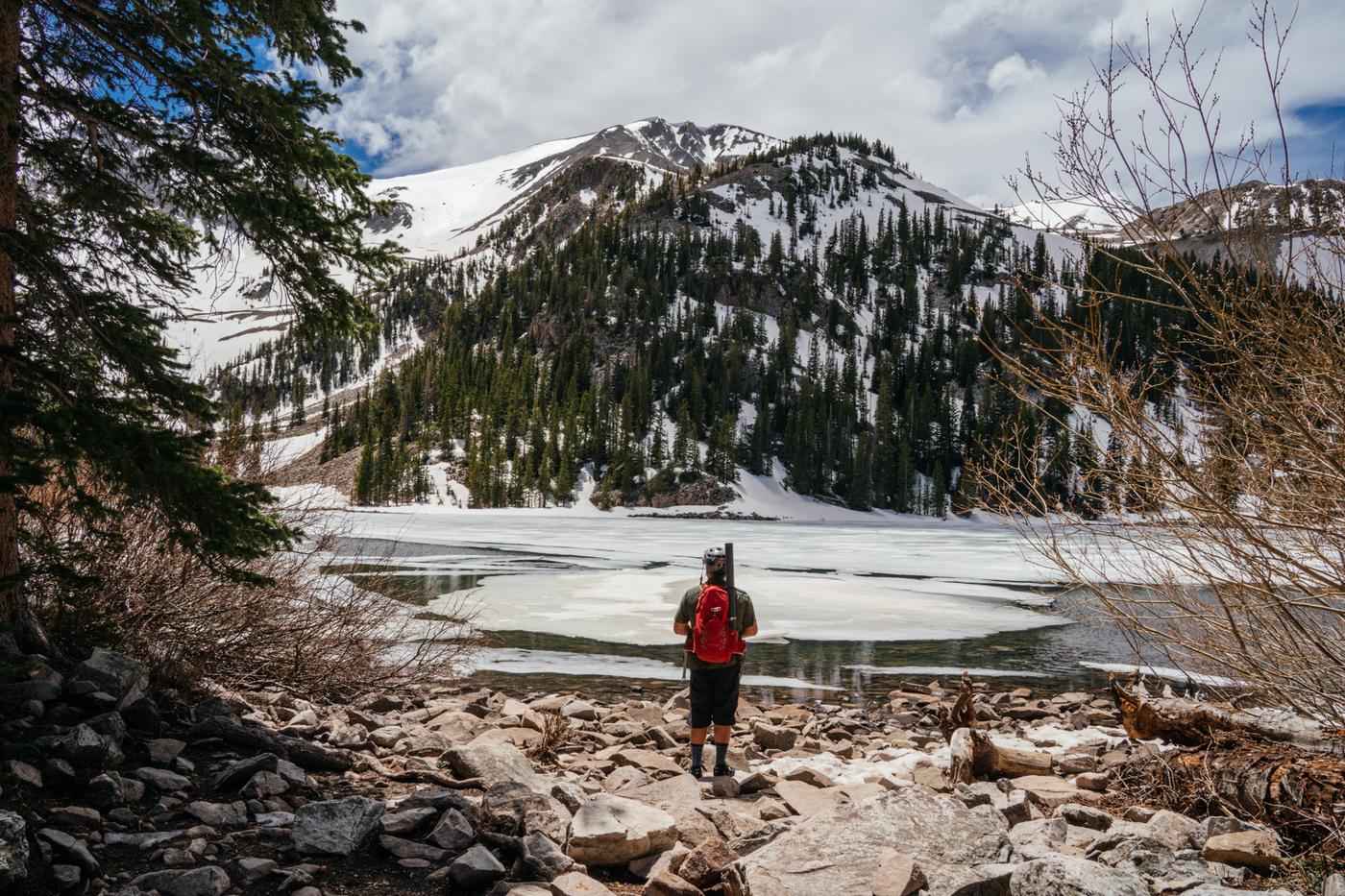 To call this pedal “pleasant” is a disservice. It was awe-inspiring. The kind of backdrop you’d see in a photo and immediately smell the crisp spring air wafting across freshly-bloomed alpine flowers. After a lot of pedaling and some pushing, we hit snowline at about 9,800′, so we dropped our bikes and post-holed for another half mile or so before reaching our destination. Unfortunately, the wind picked up and the fish weren’t biting, so we enjoyed our picnic lunch before descending back down 15 miles towards town… Start the Week Off Right

When work envelops your life, you’ve got to get it where you can fit it. Adam and his girlfriend Jenya had an idea to pedal up to a lake above the town of Marble, Colorado, about 20 miles outside of Carbondale. We’d ride our bikes up from town and seek out some fishing before coming back down to feast on the local BBQ joint. When asked how that sounded, I let out an excited “FUCK YEAH!” and immediately began to pour over the details. 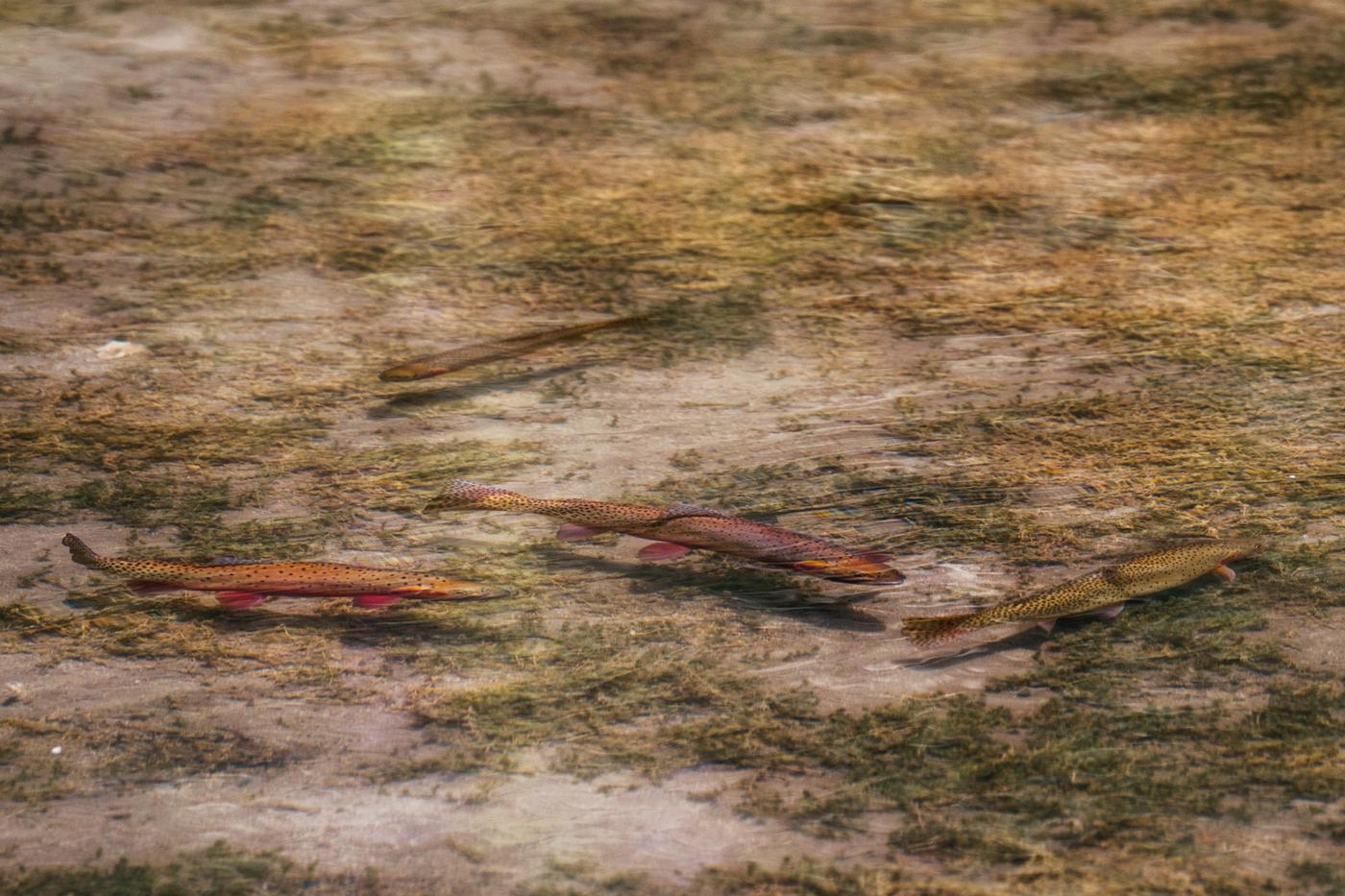 Sunday morning came and like an excited kid at Christmas, I could hardly sleep the night before. Instead of unpacking presents that morning, I was cramming all my gear into my pack. I brought my fly rod, tackle box, snacks, and my camera. Figuring even if the fish weren’t biting, it’d at least be photogenic. Little did I know our day would be action-packed. 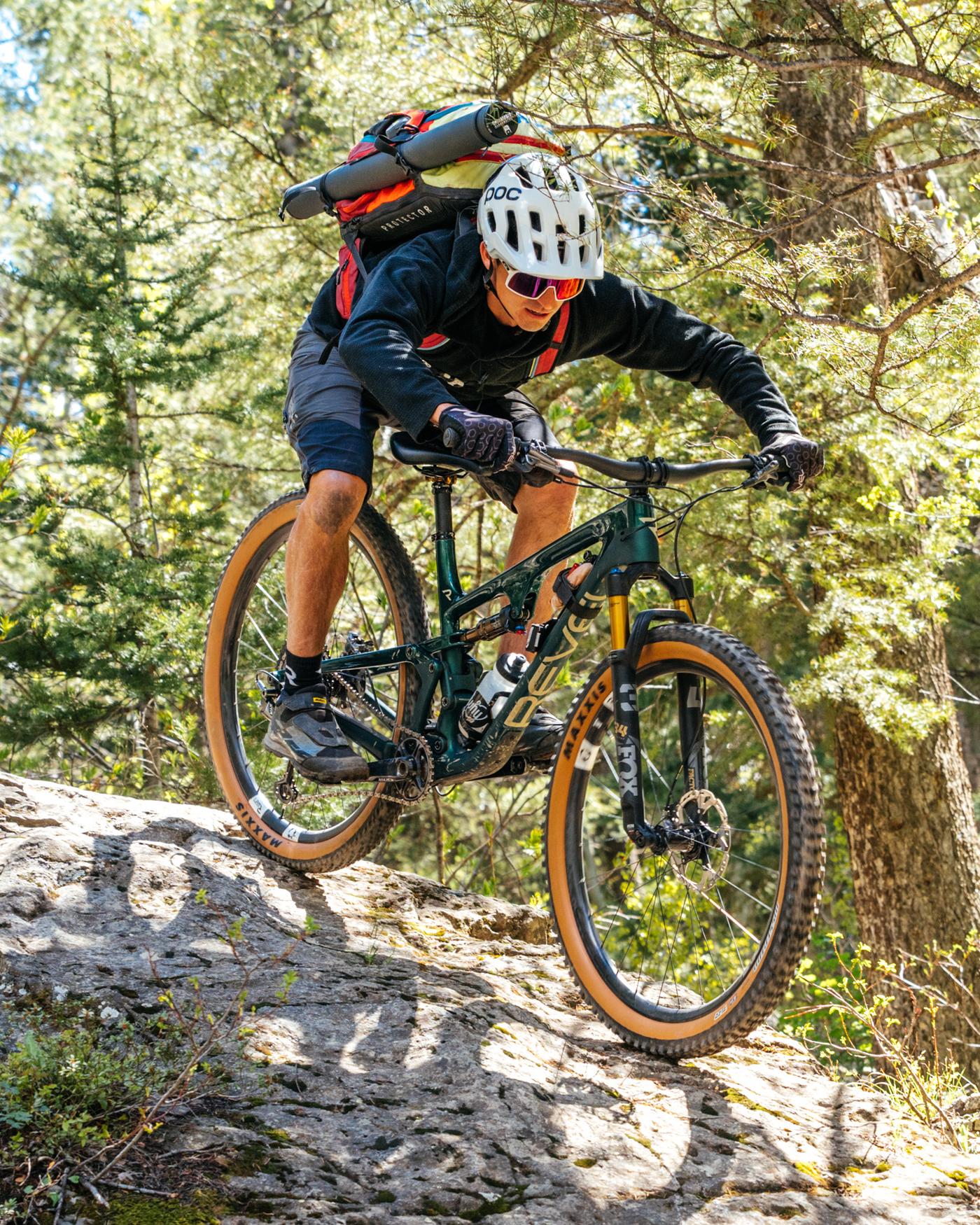 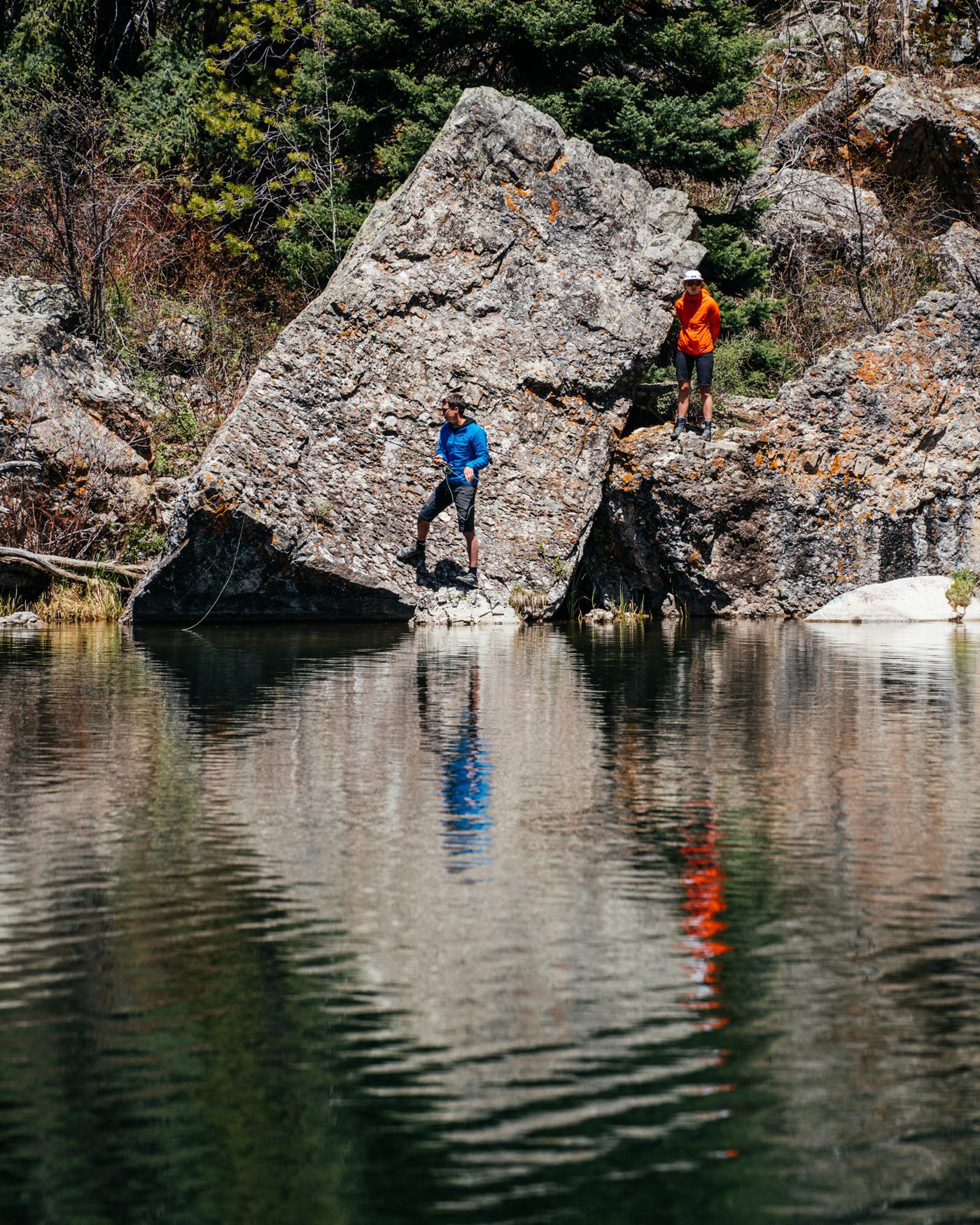 As with just about every experience thus far, it didn’t disappoint. After a slog up yet another mining road, we reached a lake teeming with Cutthroat, Rainbow, and Cuttbow – a hybrid, wild-breeding mixing of the two trout species. As we unpacked our bags, we noted fish rising, flashing, and circling the perimeter with deep, crimson fins and sides, a sign that they were nearing their annual spawning. 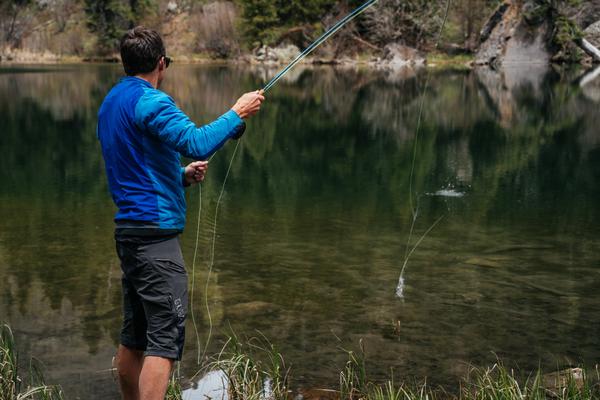 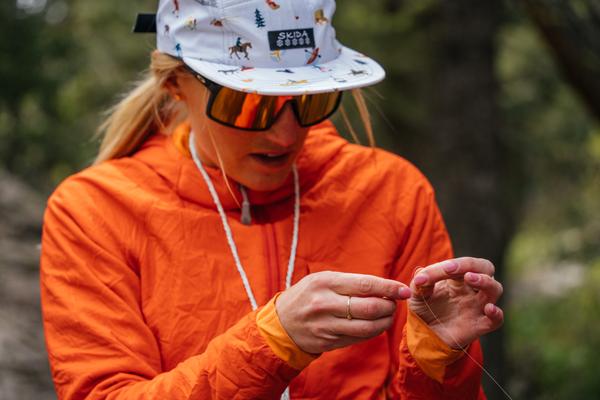 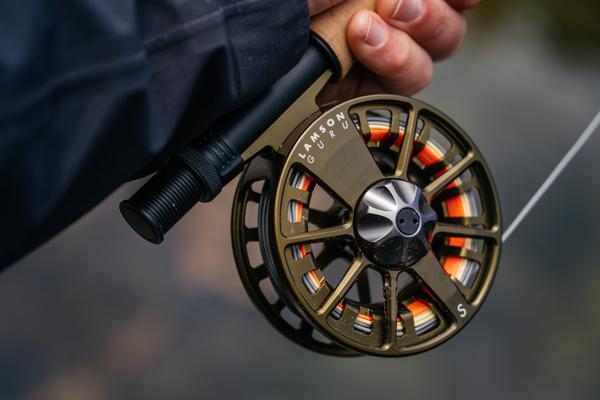 Dressed for a day of mountain biking and prepared for a full day out, we yard-saled our gear and began to set up. My first wet line had a hit and the theme for the day was set. Every few minutes, cries of jubilation would fill the canyon, echoing off the tall canyon walls. Jenya, Adam, Chris, and I all landed and released sizable fish, as we hooted and hollered cries of support and stoke. 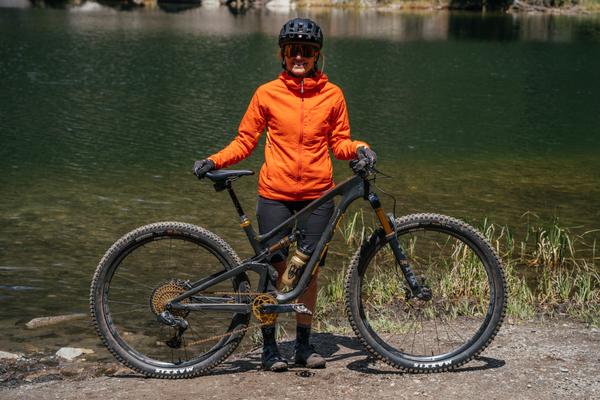 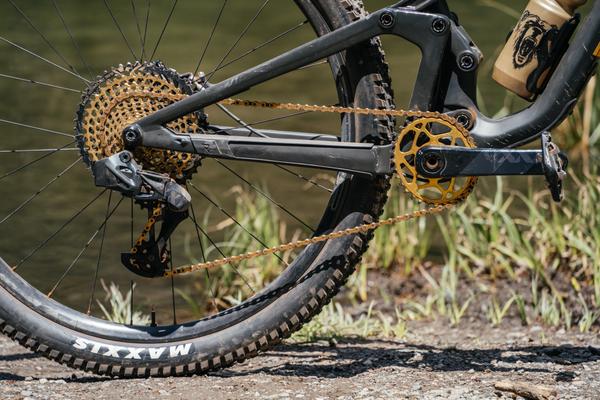 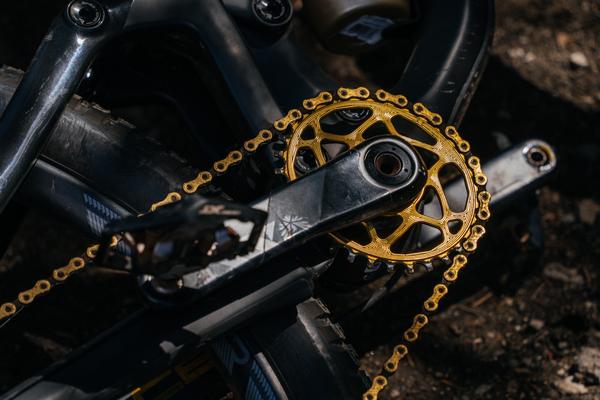 Jenya’s Ranger emits its own wavelength. Just look at this build!

Before we knew it, the day was dwindling. Our stomachs grumbled and our casting arms tired. Waiting for us back down in town was the Slow Groovin’ BBQ joint and all it took was a mentioning of its name to send us all flying back downhill, motivated by smoked tips and rich sauces. 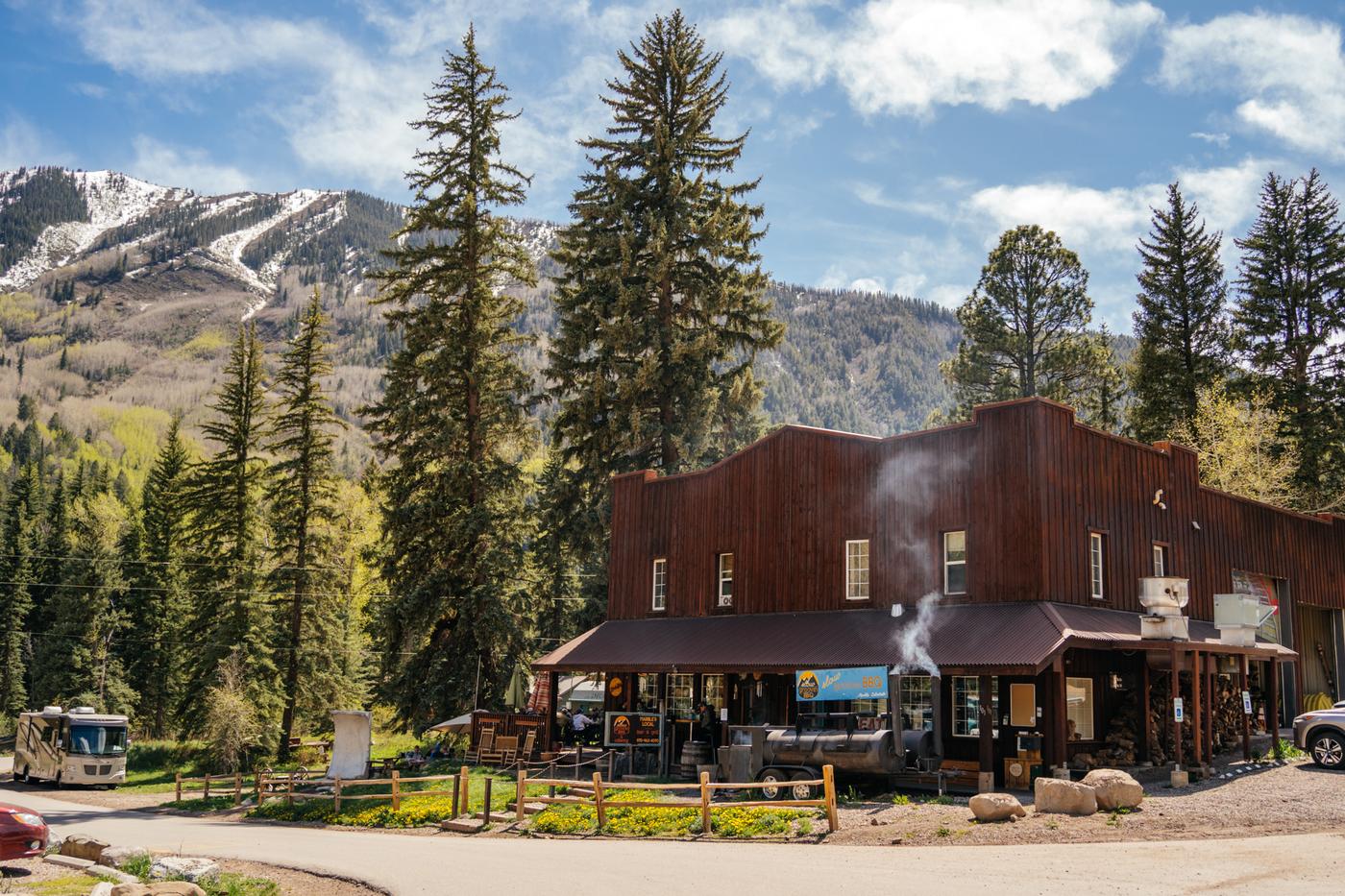 It’s now Monday morning and I’m readying my departure from the Western Slope with a deeper understanding of what motivates the minds at Why Cycles and Revel Bikes. 2021 isn’t going to be easy for small brands in the cycling industry as parts and frame shortages have become the new normal, yet the light at the end of the tunnel lies in the survival of small, passion-project brands, and their dedicated employees. Why and Revel have a lot of awesome bikes on the way, many stories to tell, and stoke to be spread. I’m sure I’ll be finding myself back in these mountains, in these streams and lakes, and riding these trails in the future. 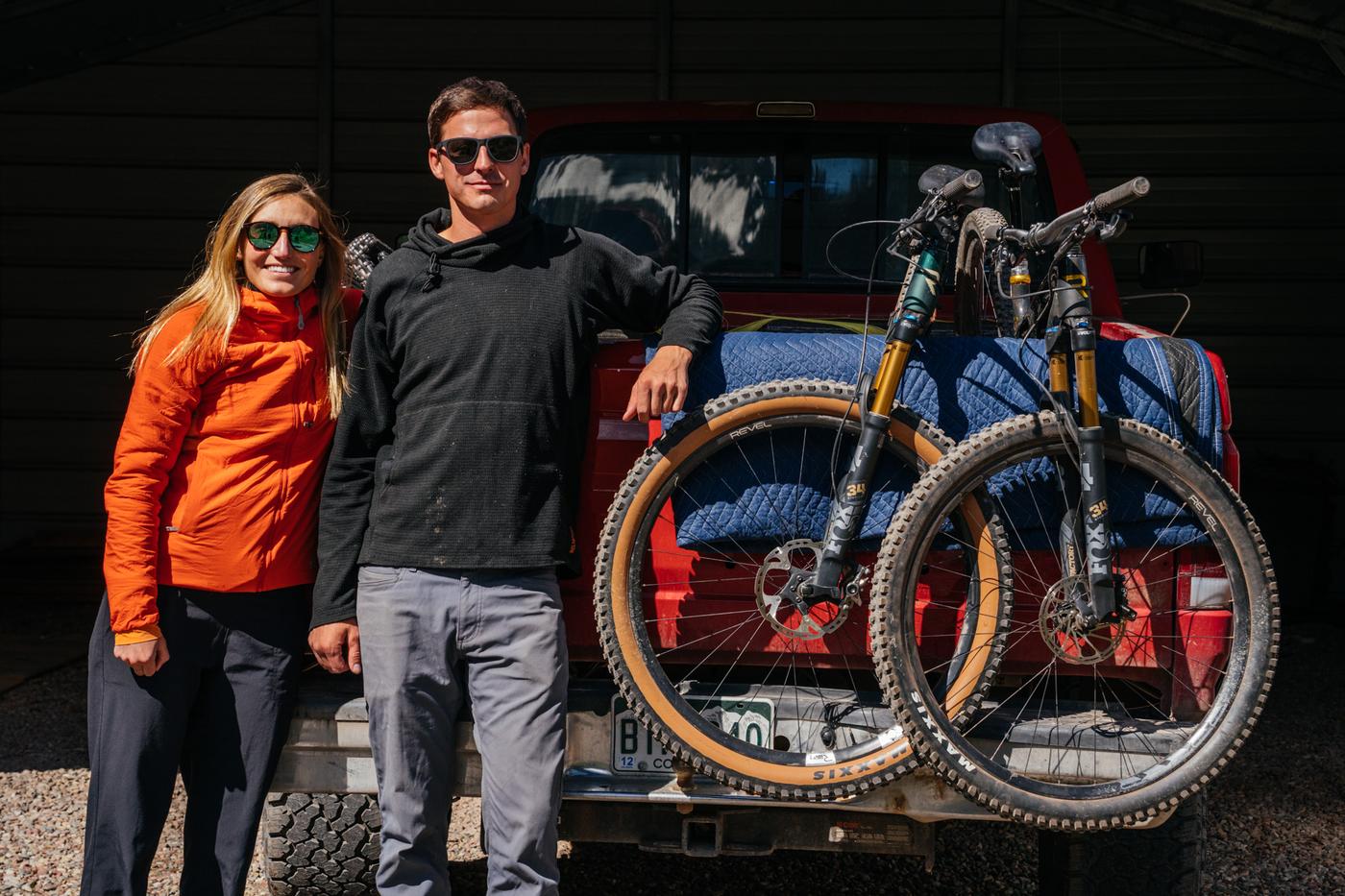 I’d like to personally thank everyone at Why and Revel for being so kind, so warm, and welcoming. I’d also like to thank Chris for allowing me to follow along on his weekend adventures and to Adam and Jenya for sharing their Sunday with me.

Now, I know some of you have Why and/or Revel builds, so let’s see them in the comments!