For anyone as uninitiated as myself in Minnesotan lore and legend, the Boundary Waters is a immaculate sprawling maze of lakes in Northern Minnesota that share a border with Canada.  I can’t remember who, but someone a few beers deep around a campfire eulogized about the boundary waters for quite some time, since then its hung in the back of my mind to check it out if the chance ever arose.

Two summers ago, after having done a good clean trade; my old bike for a friend’s packraft, I was eager to get out and do some paddling.  But if you look at the full name of the area is the Boundary Waters Canoe Wilderness Area, but, I don’t have a canoe….well, I do but it’s back in Oakland, CA.  Anywho, I have this fancy floaty toy of a raft that paddles poorly on flat water, why not try and paddle around a bunch of lakes on it?  Furthermore, have any of you ever tried to look at a map or more importantly decipher the codex that is the permit process for launching in the boundary waters? It’s crazy, I’ve hardly spent more time pouring over maps hoping for clarity as much as I did for this trip.  After a few days of sifting through it all I had an idea; what if I just hiked into the wilderness instead of starting from a boat launch?  Grey area? For sure, but it doesn’t seem to be against the rules, technically.  I would find out that the reason nobody had hiked in with a packraft to the boundary waters was mostly that it is a very stupid idea. I drove up to Ely, MN, and visited the permit office for the Boundary Waters. The nice Ranger looked at me kinda crazy when I asked for a hiking permit, they had never issued a hiking permit before (red flag #1).  Nonetheless, she got it sorted and I was on my way to the trailhead, where I was the only vehicle parked at the Kekekabic trailhead parking (red flag #2).  I had planned to hike about 9 miles in along the Kekekabic Trail then cut off on some smaller trails to put in at a fortuitous spot along one of the larger lakes in the wilderness.  The first mile or so was great, but the deeper I got, the less maintained the trail became, bordering on route finding through some of the boggier sections.  Undeterred and out of hiking shape, I kept on with my plan.  Finally, I had reached a path that served as a more popular portage between lakes and the hiking was passable for a short while. After that the trail became nothing and since I was damn close to the lake it was finally time to put-in.

I pumped up my raft and strapped my pack to the front and away I went.  I scolded myself for dredging for 9 miles when I could have been paddling much sooner.  Once on the water, the bugs seemed to disappear, the breeze felt lovely, and the water was smooth paddling.  I was able to able to make a small tour of some smaller lakes in the dusky hours.  With my raft weighing around 7 pounds, the portages between lakes were quick and painless.  This allowed me to visit a few lakes that would be more prohibitive with a heavy canoe and gear. In these sections of the Boundary Water the packraft really shines. I found a nice spot next to the water to camp only to find that I had forgotten my tent poles, improvisation time!  I got it sorted.  The sunset and sunrises were spectacular due to smoke blown far from home in Colorado all the way out East.  I laid my head down for the evening to the enigmatic call of the Loon, which I only recognized from the sounds effects playing fishing video games as a kid.

The following day I set out for a long paddle that would lead me back toward my car.  All in all it was about a 12-mile paddle on flat water, cue tendonitis in my elbow.  The day was stunning nonetheless, I saw multiple bald eagles, got to skip a portage by rafting the “rapids” between two lakes, and generally enjoyed the lovely weather.  My elbow’s recurring tendonitis had other feelings about the day, but we pulled through. I ended the day hiking out and possibly gently trespassing through a boy scout camp to get to a final lake camp for the evening.  The bright red orb of sun barely making it through the clouds and smoke, set a few minutes early as it hit a layer of smoke and clouds the light couldn’t pierce. 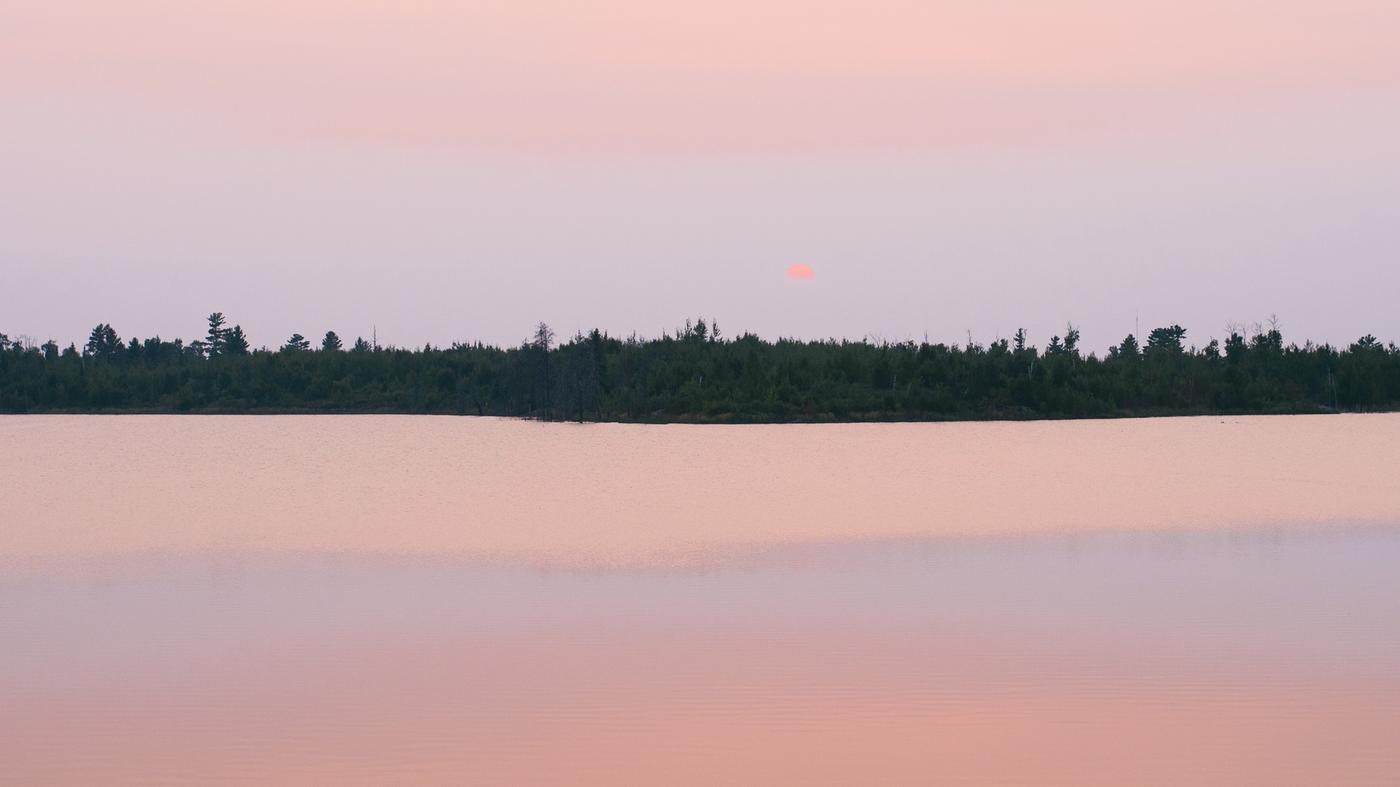 The next day had just a short paddle followed by a 4-mile hike back to my car.  I went in with a stupid plan and no idea what to expect and I was floored by the landscape.  The diversity in the old-growth sections of the forest is stunning when you take the time to examine them. You really have to look closely here, but when you do it’s incredible how dense with detail the forest is.  The Loon call is such a hauntingly beautiful sound; right up there with the coyote howl for reminding you how wild a place you are surrounded by.  While I don’t know if I can totally recommend taking a packraft to the Boundary Waters, I can absolutely recommend visiting the wilderness area. Whoever that person around a fire waxing poetic about the Boundary Waters was, they were totally right.

This area is currently threatened by an increase in Sulfide Ore Copper Mining that could pollute and damage the delicate ecosystem that is the Boundary Waters, for more information click here