The current worldwide situation has forced Kyle and I, along with everyone else, to rethink our spring activities. With mountain bike races cancelled and out-of-state trips a no-go, we were suddenly left with a lot of empty weekends and an excuse to explore more of New Mexico. We finally had the time and motivation to give this bikepacking thing a try, something that had been at the back of our minds for quite some time. Despite both of us having spent thousands of miles backpacking the Sierra Nevada, Cascade Mountains, and the canyons of Southeast Utah, we still were new to the world of bikepacking.

We loaded up our singlespeeds for the first time with the bare minimum of gear, finding out that we could carry even less than if we were backpacking, and hit the trail with a mostly defined route planned out, but only a vague idea of where we’d end up that night (it would be somewhere near water, we knew that for sure!). We packed our Tenkara rods, flies, and camera in anticipation of exploring the pristine waters of the Jemez Mountains for trout. 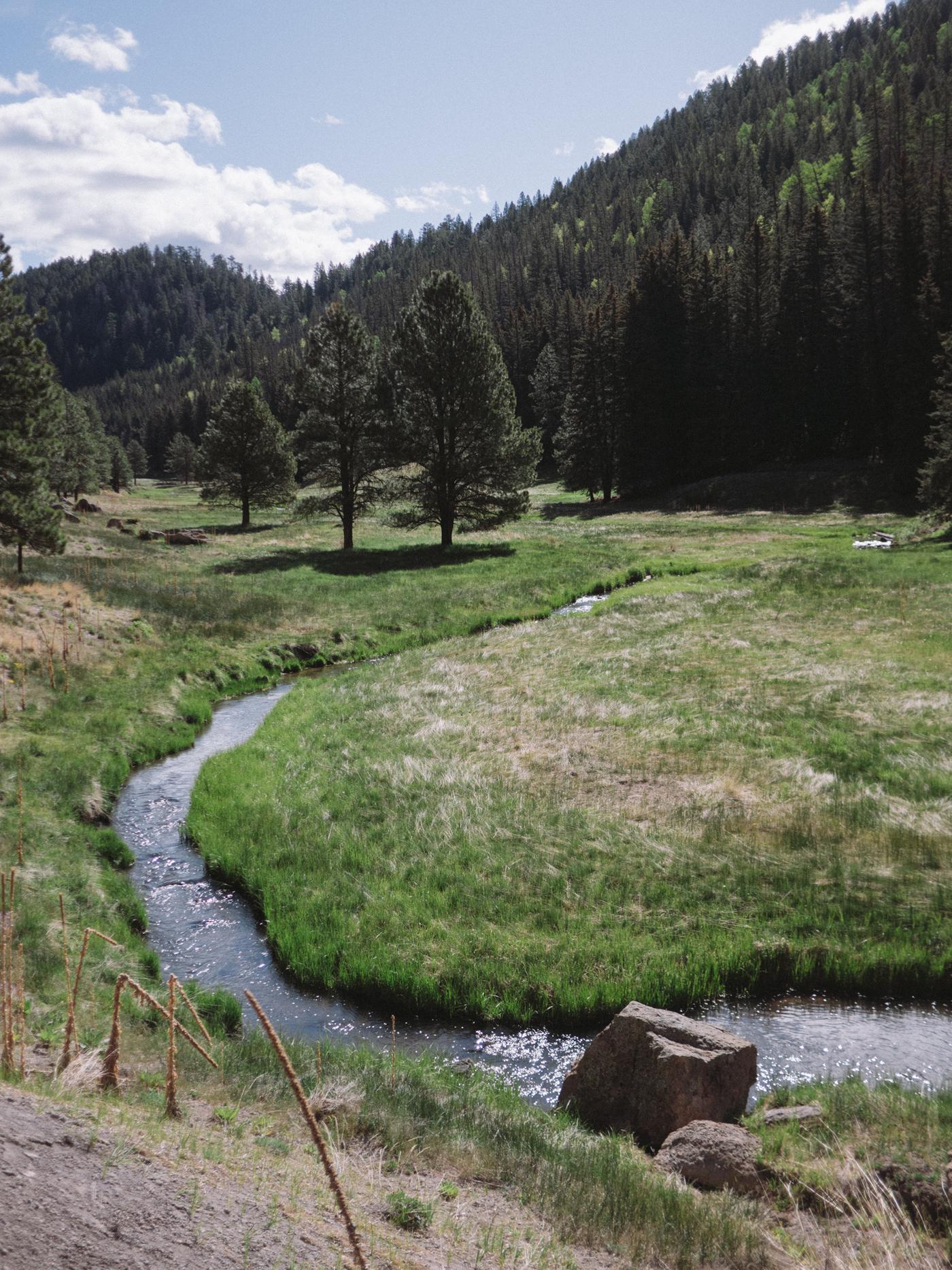 We hit the trail, but it wasn’t long before we spotted some deep cutbanks below overgrown grass. We pulled off to the side, yanked out the fishing rods, and Kyle had a fish on the line on his first cast! This was a promising start. We slowly worked our way up the valley on our bikes, stopping every so often to see if we could pull out a few trout from the narrow meadow stream. Kyle made it look easy, despite gusty winds that decided to change direction every minute. I managed to pull one little guy out of the water despite my lack of skill (I’m still learning!).

Our route put us up on a ridgeline road that appeared to be composed of pure moondust. The Jemez Mountains are remnants of a giant supervolcano and this type of soil, ‘tuff’ as they call it, is typical. However, it was so deep that even our 2.4 tires were not enough to pilot us through the ruts. After getting dusted by several passing vehicles full of holiday campers and bogging down in the deep powder on the steeper climbs, we decided to find another way off the ridgeline and back to fishing waters. 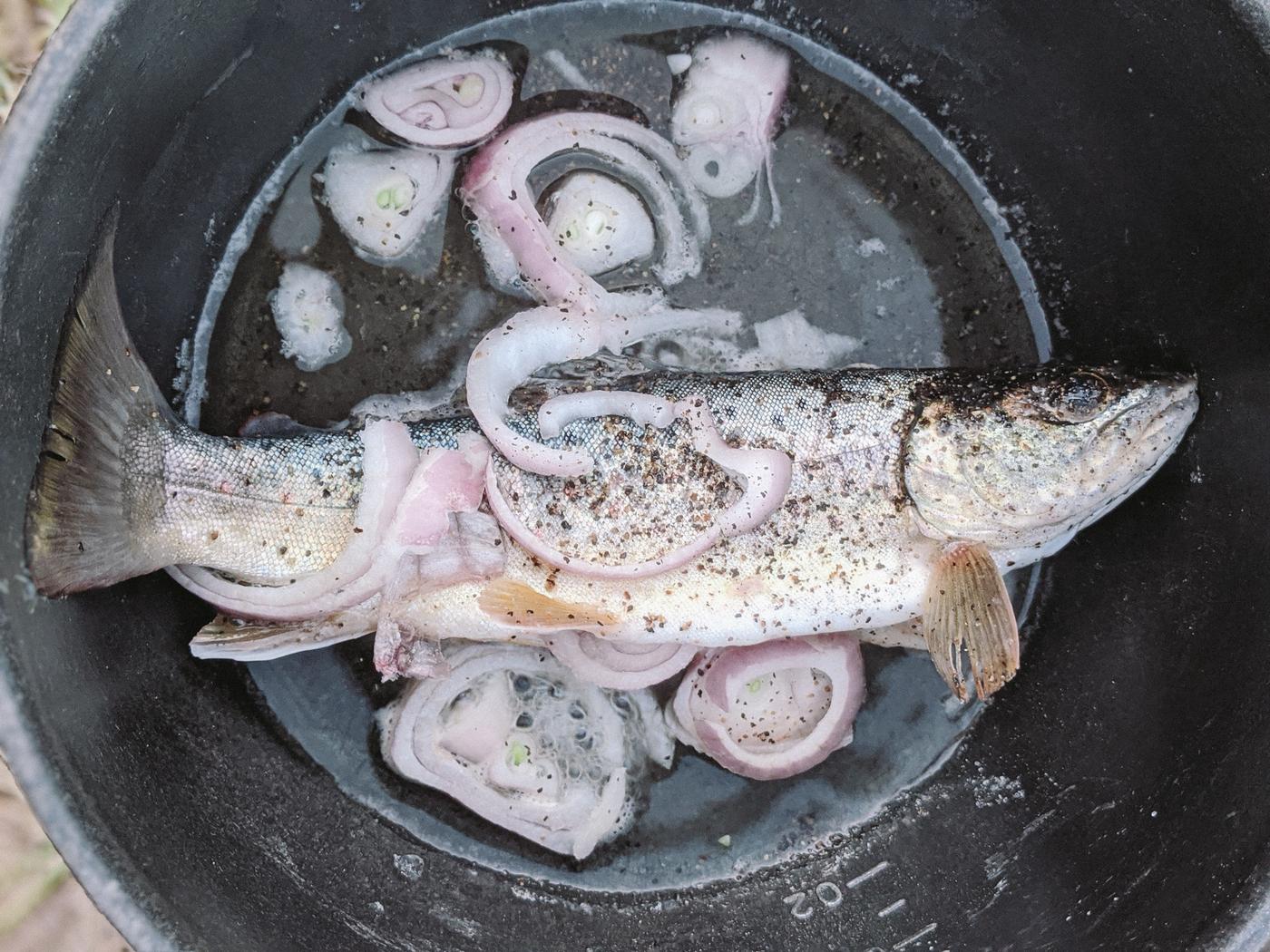 The detour forced us to do some off-trail navigating and bushwhacking, but we found ourselves down in the next valley and on the road we had intended to reach. Our ride brought us to the Valles Caldera National Preserve, recently added to the National Park Service inventory. We were completely alone and fished until the sun got low. Having caught a few impressive trout, we decided to pack our rods and get outside the park boundaries to set up camp for the night on an old, unused, overgrown road near the stream.

During the final hour of twilight, Kyle managed to land one more large enough Brook trout that we could cook as part of dinner. I prefer to keep it simple: salt, pepper, and some onions is all you need for the sweet flesh of alpine trout. With the last bit of light hitting the treetops, the temperature dropped quickly. We called it a night and nestled down into our sleeping bags. 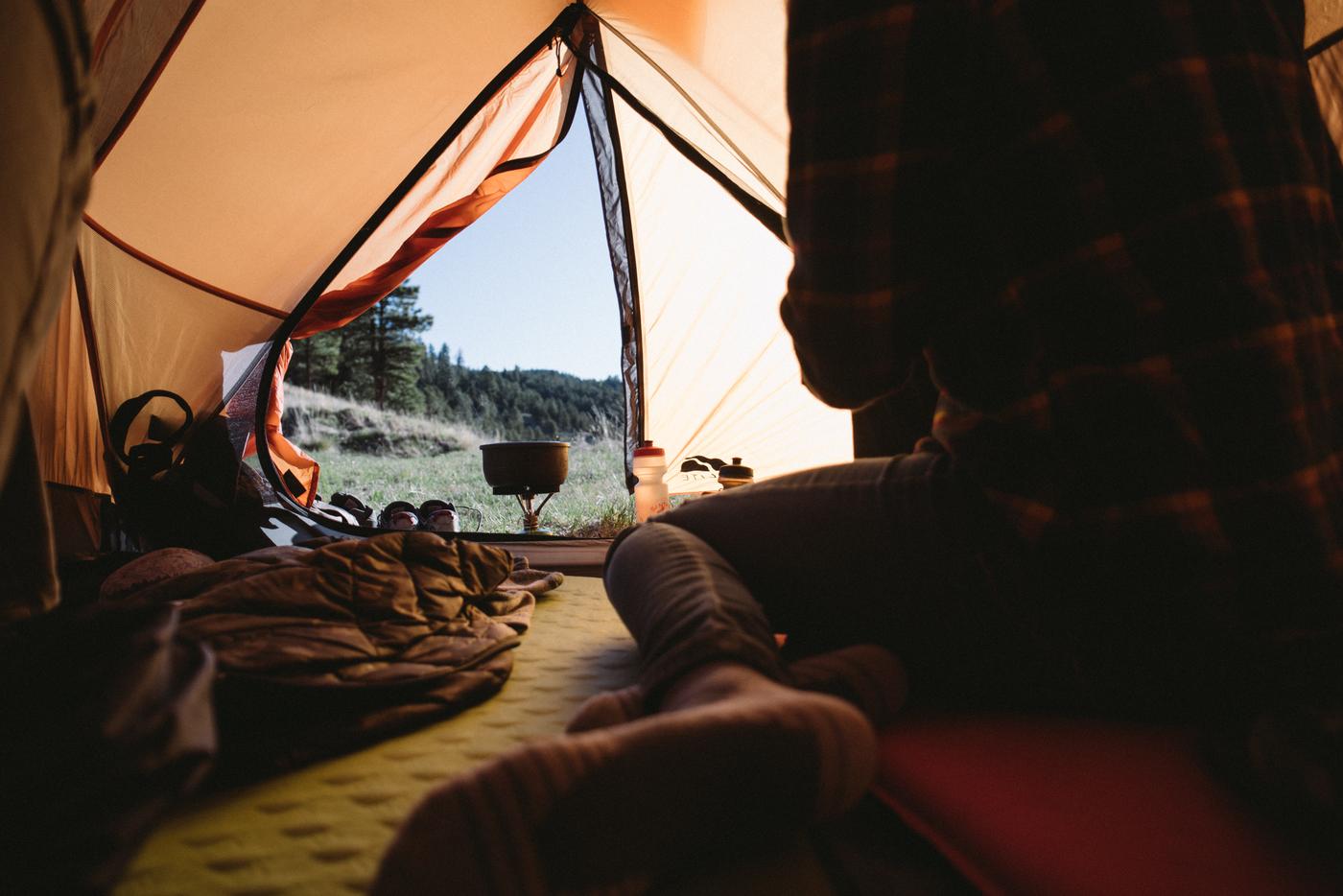 After a fitful night of shivering and hearing critters rooting around our tent between bouts of sleep, we awoke to the sound of a mule deer splashing across the stream. The morning was warm and pleasant in contrast to the cold night. We had our instant coffee and some breakfast, packed up camp, and hit the trail again. A mild day of riding lay ahead of us, so we took our time, stopping often to enjoy and photograph the views. The fish were not rising this morning, so we did not stop to fish; however, we did make a detour to soak in some natural hot springs before continuing the ride out. Fortunately, there was a pool awaiting our arrival and we could enjoy the canyon views for an hour of soaking before packing up for our final stint.

The road out was mellow and we cruised along as the valley dropped away below us (we missed the singletrack turnoff that we were supposed to take – whoops!). Our missed turn meant we had a little bit more of a highway ride than we had intended, but it was downhill and we cooked it to the turnoff. We pedaled through the last little bit of old logging road and singletrack until it dumped us back at our friend’s cabin, just barely ahead of some rain. 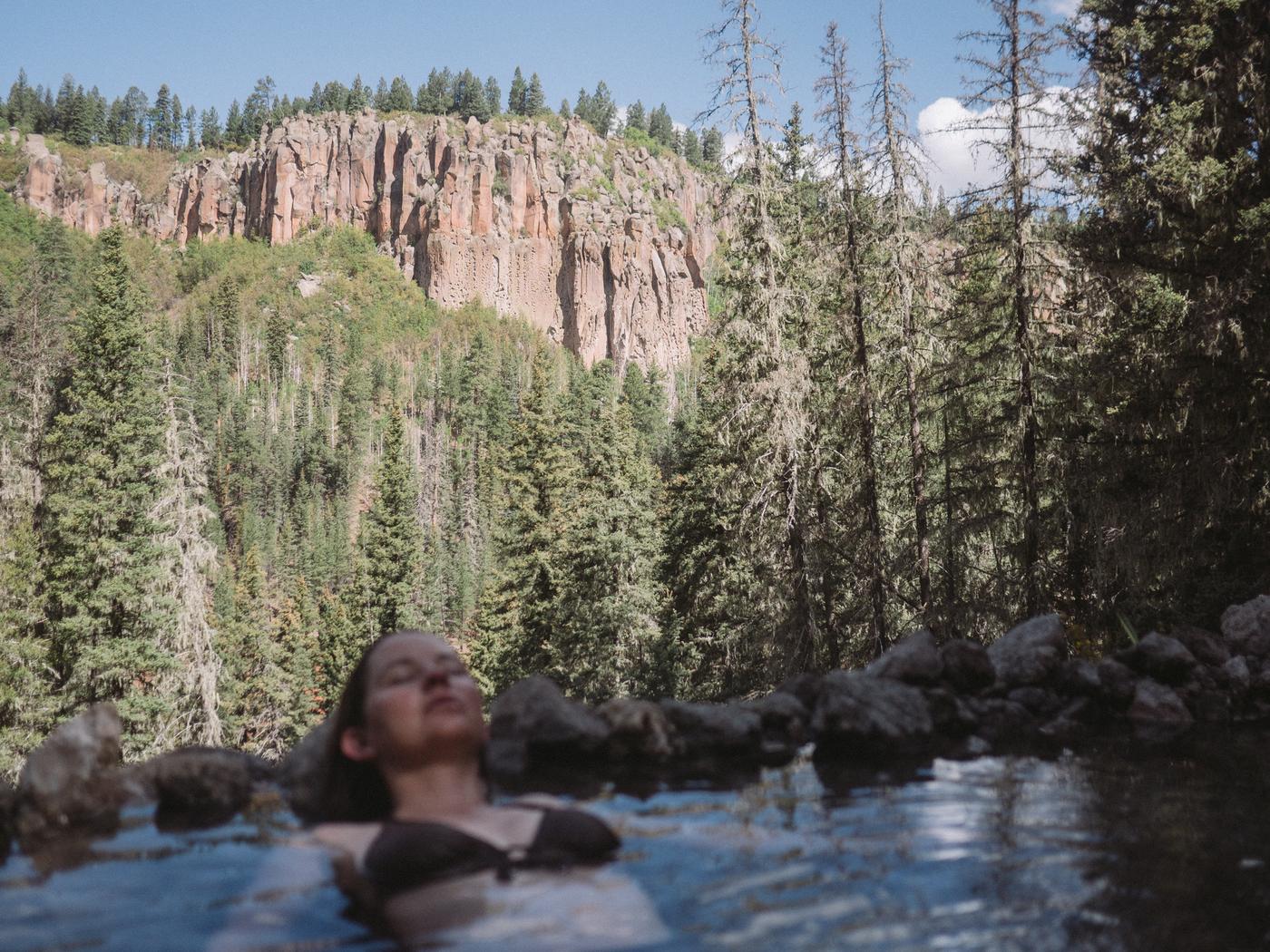 We learned many things on our first bikepacking trip. 45 degree bags are not warm enough for mountain camping (okay, we knew that already; we erred on the side of packable size over warmth, but we will work on a method to pack our warmer bags next time). 32×20 (my bike) and 30×18 (Kyle’s bike) are just a tad steep for bikepacking – we will try it with two extra teeth on the cog next time. Don’t cook fish in your only pot unless you have some soap to get the smell out (we didn’t). Blue spruce tip tea tastes amazing after a day of riding and fishing: we clipped some fresh tips from a nearby tree and made some tea to warm us before slipping into our sleeping bags. And finally, backcountry trips are the most fun when you don’t have a strict agenda and go easy on the miles, especially when you can share your adventure with your best friend. Dr. Kimberly Klain is originally from Las Vegas, NV. She now lives in Santa Fe, NM, and works as a nuclear engineer at Los Alamos National Labs. After arriving in New Mexico nearly a decade ago, she discovered her cycling obsession, piloting everything from SSCX to racing Enduros. 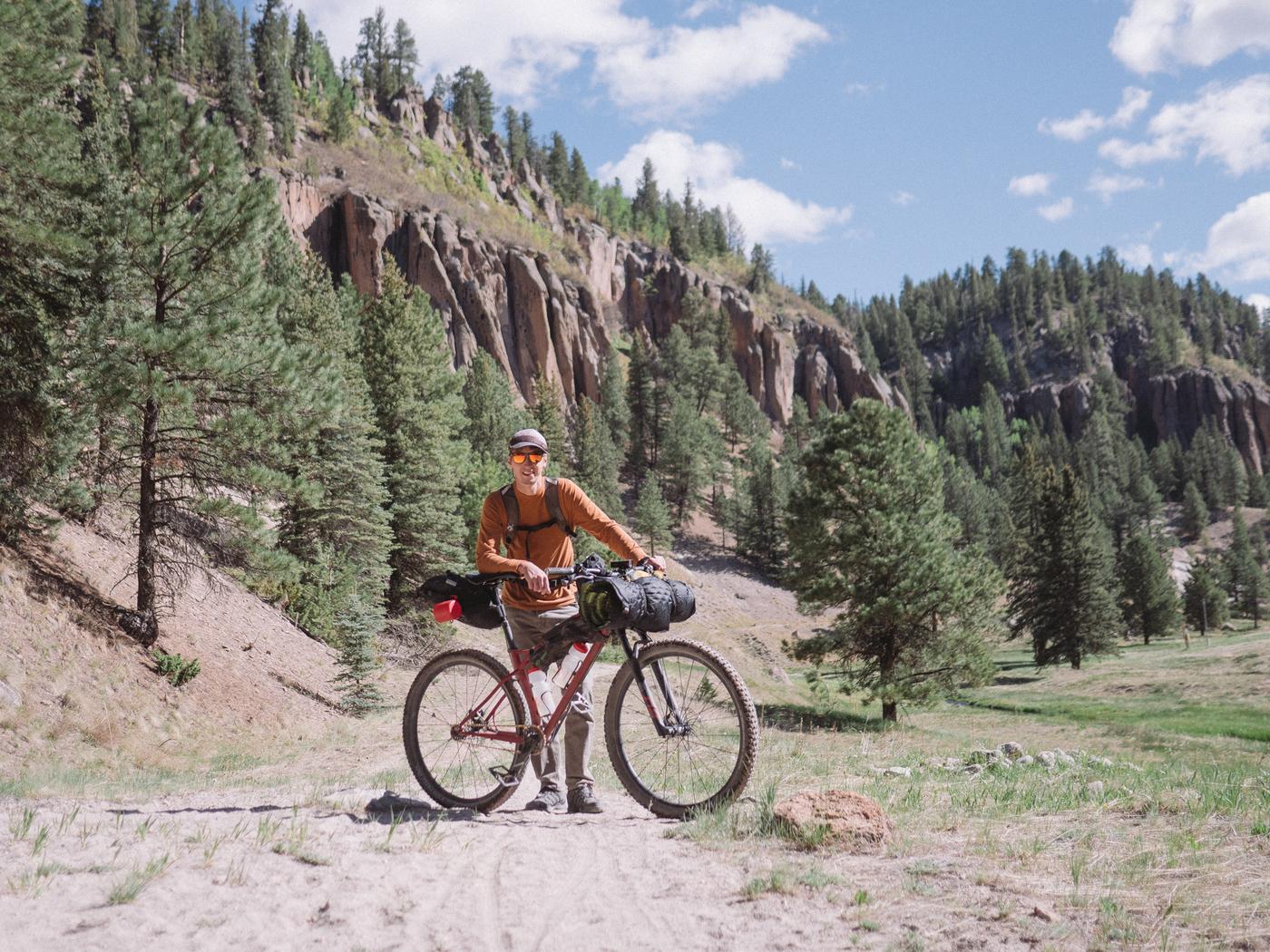 Kyle Klain grew up with trout and salmon fishing in his blood, having been born and raised in Oregon before migrating to drier pastures in Santa Fe. Kyle manages a local real estate brokerage in between outdoor pursuits and photography.