The myriad of trails feels endless here in Santa Fe. With the town butting up against the National Forest with its multiple trail networks all interwoven, and a very popular downhill trail, tying a lot of them together, the possibilities for quick overnighters or bigger backcountry loops feels limitless. It wasn’t until this week that I tapped into its overnighter bicycle camping potential.

This story and its gallery will be short and sweet. It serves as a reminder as to what we can expect this summer to be like as Santa Fe and New Mexico, in general, slowly begin to return to normal. We kept this group small in the interest of ‘social distancing.’ Yeshe, Bailey and I, headed out from Sincere Cycles when the shop closed on Thursday evening at 6pm. We’d pedal a route I’ve done before, except for one descent, which came as the twilight swept through the forest. The trail was illuminated in blue hour light creeping through the darkness. Full-speed, unknown singletrack on a loaded bike is both terrifying and enlightening at the same time. You rely on instincts, knowing that if a tire goes off-trail, the likelihood of correcting its path is slim.

Arriving at a meadow with a creek flowing, I assumed we’d camp there. Yeshe and Bailey had other plans. Soon we were climbing up the trail in pitch-black darkness. I wasn’t used to having to pack a riding light since just recently, I removed my dynamo light when I swapped the ENVE fork in for the steel fork and still haven’t planned how to re-attach it. My camp headlamp would suffice, barely… 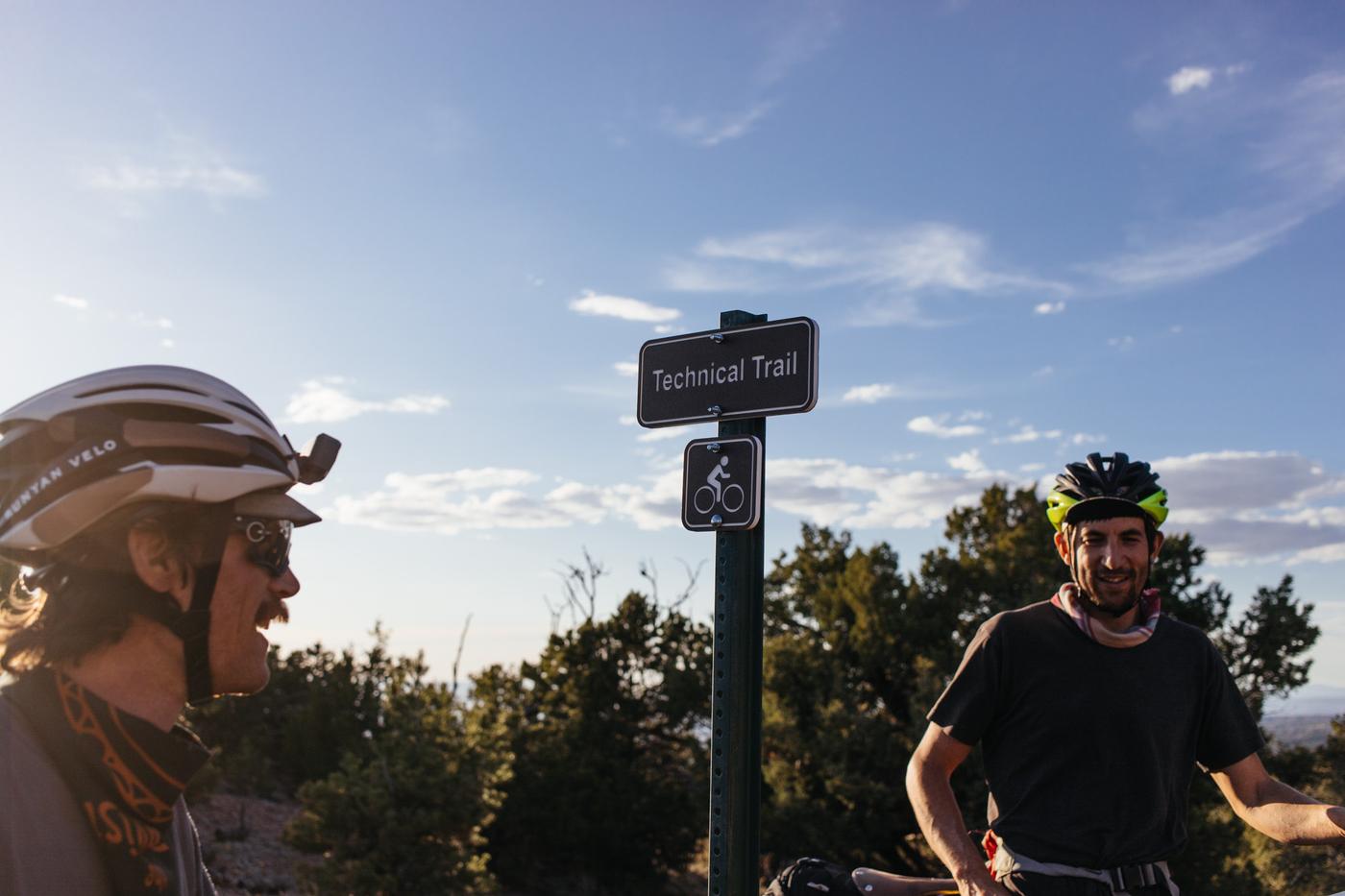 My biggest challenge since moving to town is the extreme fitness of my single speed riding friends. Who, even on a loaded bike seemed to be racing up the trail in an attempt to break a record of some sorts, when in reality, they just had to keep moving at that rate to keep their bike upright.

Soon we were at camp, next to a deadfall teepee construction, which was remarkably eerie and welcoming at the same time. Eating the burrito I bought back in town, my legs and back reminded me what it feels like to be in pain, yet ecstasy at the same time. Endorphines, like a warm sleeping bag, began to cloak my pain. Shortly after chatting for a bit, we all fell to the exhaustion of our afternoon’s outing and turned in beneath a starry sky. 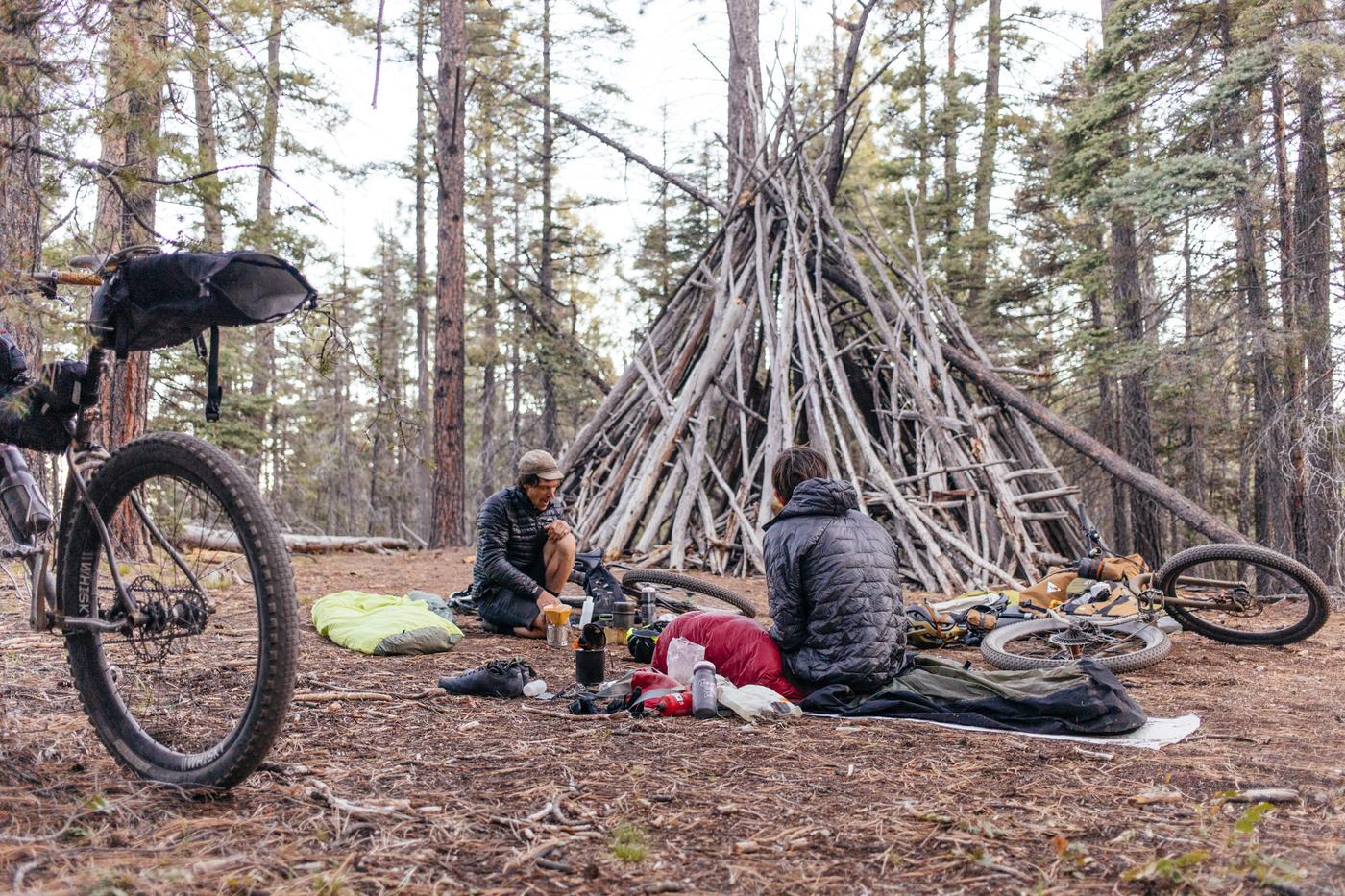 Waking to the call of some unknown bird chittering high above our camp, I found that my water supply was just enough for instant oatmeal and crystalized coffee. Packing minimally makes for quick mornings and we left camp before 8am, ripping back down the trail to the pavement where the idea of a breakfast burrito took over my motivations. Yeshe and I pedaled towards the burrito spot with equal intent. Trips like this reinvigorate the soul. Lately, I’ve been under a lot of stress and pressure but for the time on this outing, I focused on the sights, sounds, and smells. It wasn’t until rolling back through my front door that I was reminded of one thing: riding isn’t an escape or a way to leave your problems behind, it’s the way in which we create balance in life. Before I took these outings for granted, yet now, there’s a new appreciation for achieving this balance.

Here’s our route, free for you to take on yourself or with your friends.