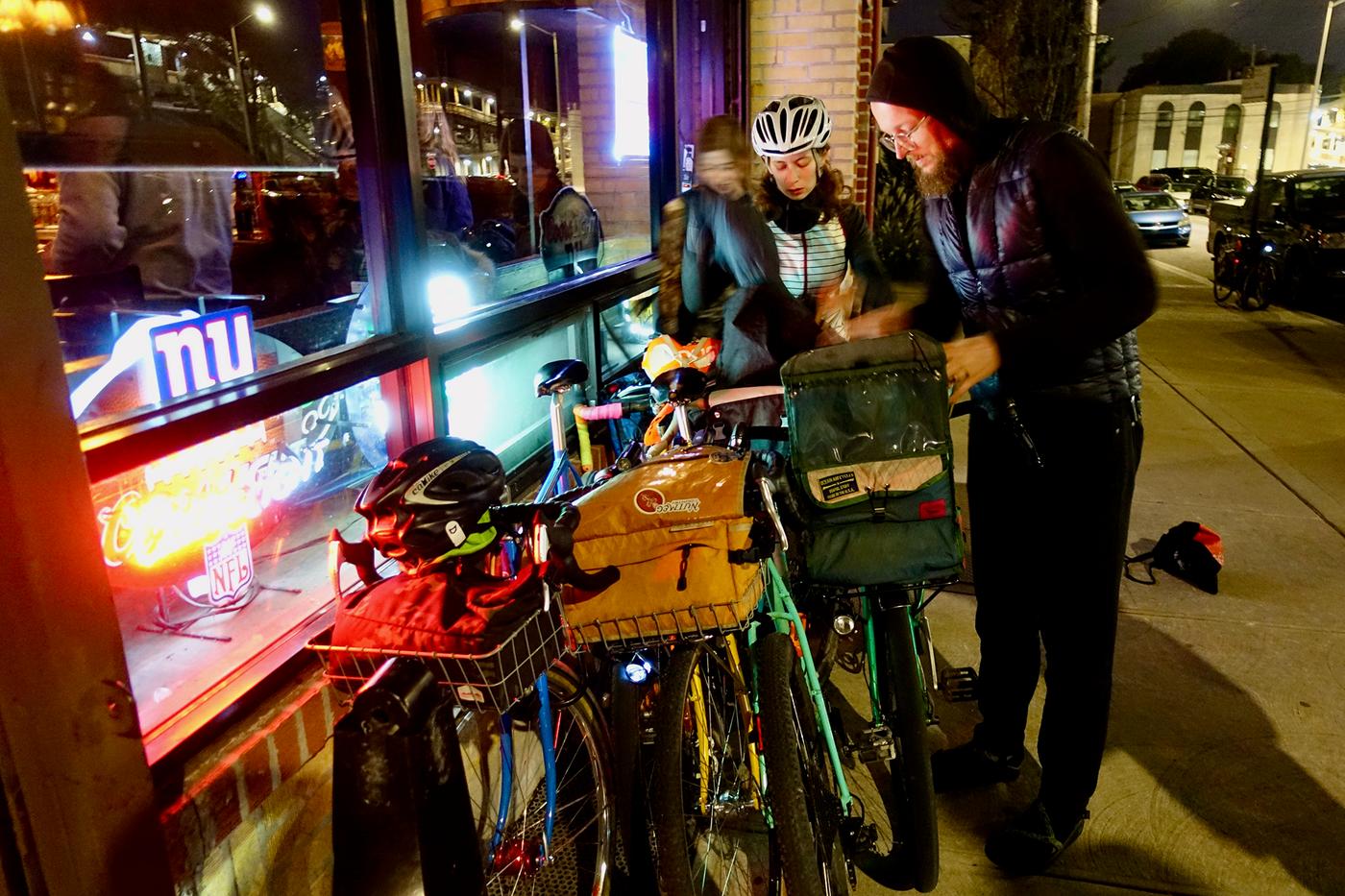 In early November 2019, founder Adam Paiva declared that the first meeting of the NYPDS would take place later that month on the shores of Staten Island; a place best known in popular culture as being the birthplace of the Wu-Tang Clan. Among New Yorkers, it’s more commonly referred to as “that borough with no subway where all the cops live.” In addition to police officers, the forgotten borough is also home to a large number of fine pizza-making establishments, linked together by spacious roads lined by single-family homes and strip malls reminiscent of small-town suburbia. 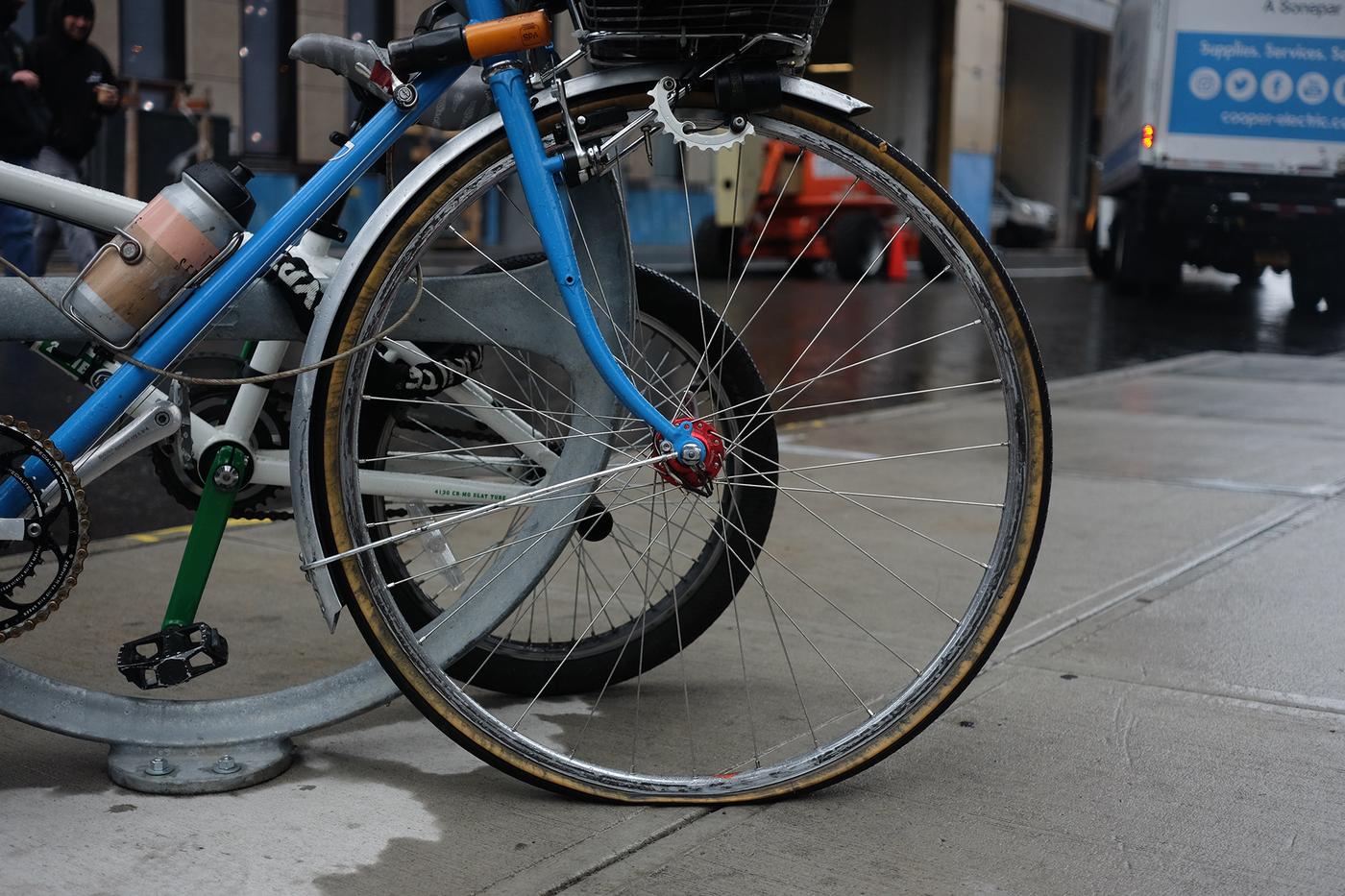 Because the only bridge connecting Staten Island to the rest of the city is a giant interstate highway that’s off-limits to bikes and pedestrians, we had the privilege of starting our trip with a free ferry ride across the Upper Bay. Ten of us convened in the lobby of the Staten Island Ferry Terminal in Manhattan on a brisk Thursday evening with the intention of catching the 6:30PM ferry. Because a few of us (myself included) were a bit late, we ultimately settled for the 6:45. Conveniently, this gave us time to conduct a quick dynamo check on all the bikes in attendance. 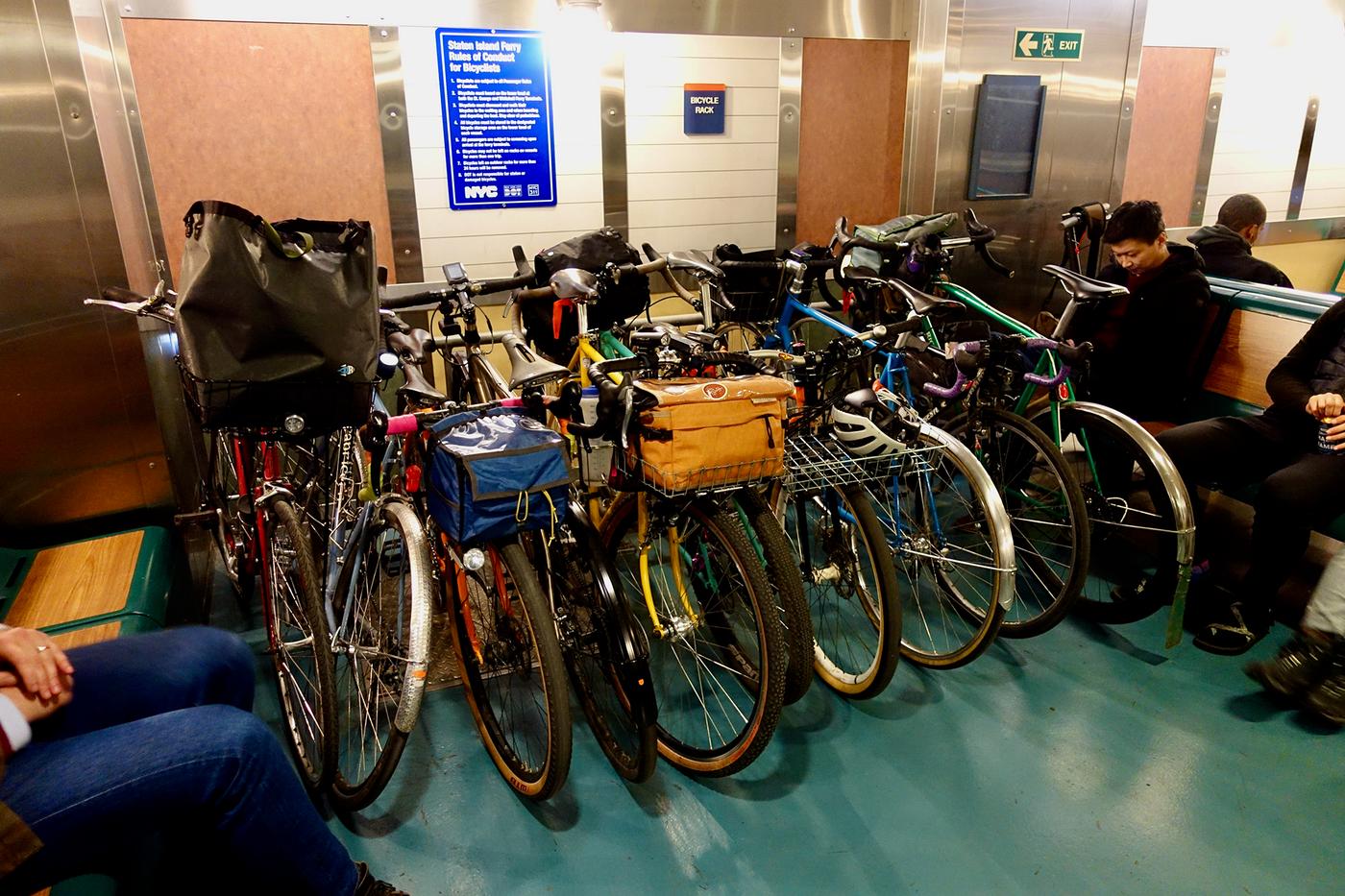 Per Adam, the first rule of NYPDS is that membership is contingent on riding a bike with a dynamo light setup. A corollary to this rule is that any bicycles relying on battery-based lighting systems were subject to defenestration from the Ferry. No fewer than three bikes were found to be in violation of this decree, but we decided to loosen the regulations this once, just for the inaugural outing. Subsequent transgressions may not receive such leniency. Despite having lived in New York for nearly five years, this was my first trip on the ferry. I’d heard that the boat’s decks offered some nice views, but I wasn’t prepared for just how stunning they turned out to be. On this clear night, we had an unobstructed look at lower Manhattan from the stern, while a breathtaking view of the fully illuminated Statue of Liberty materialized and then faded from the starboard side as we floated on by. 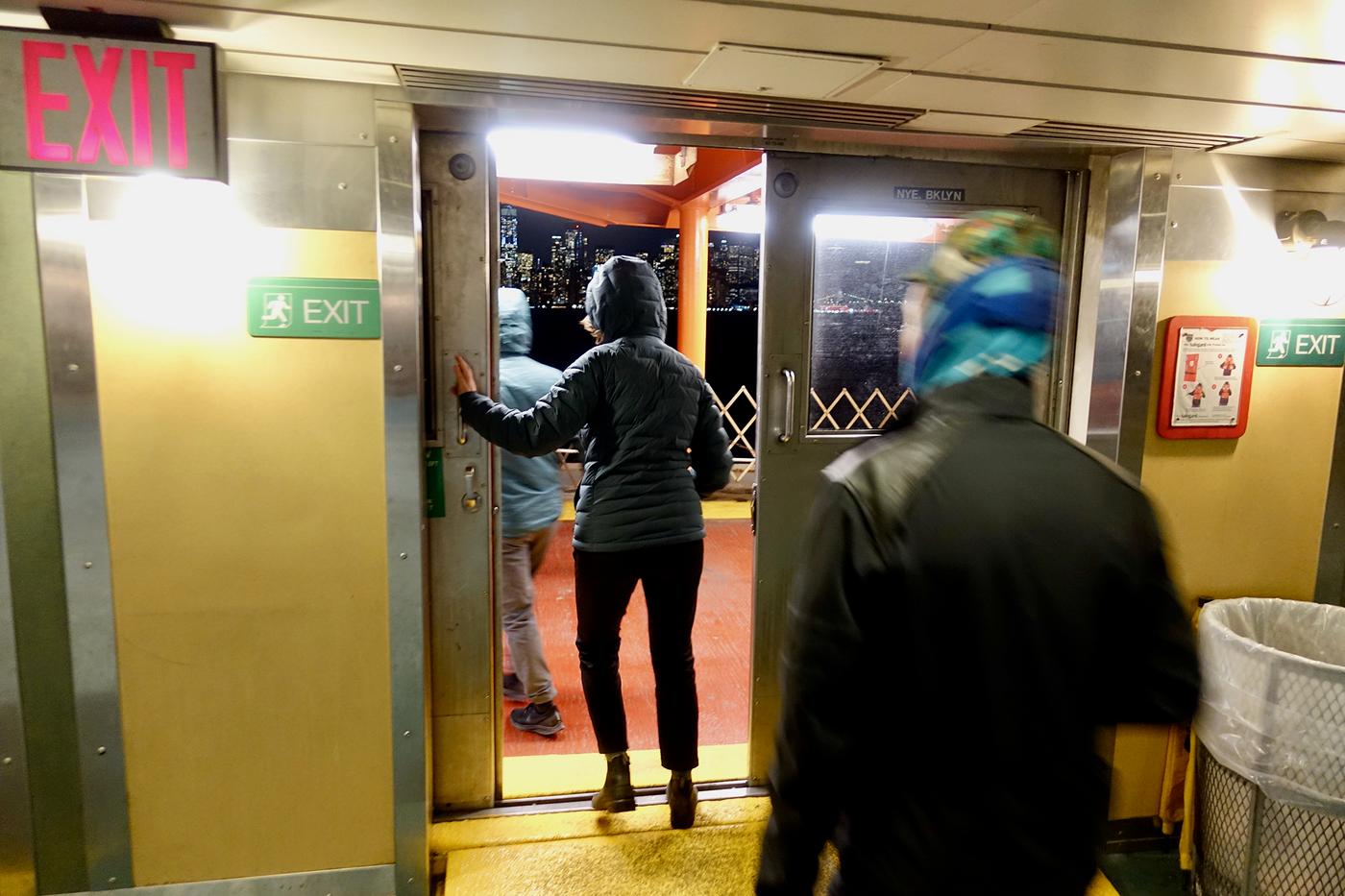 As we mounted our bikes after disembarking the ferry, we came to the collective realization that Adam hadn’t shared the route with anyone else. I, along with at least a few others had assumed this would be a leisurely ride along the most direct route to the first pizza place. Adam had other plans. 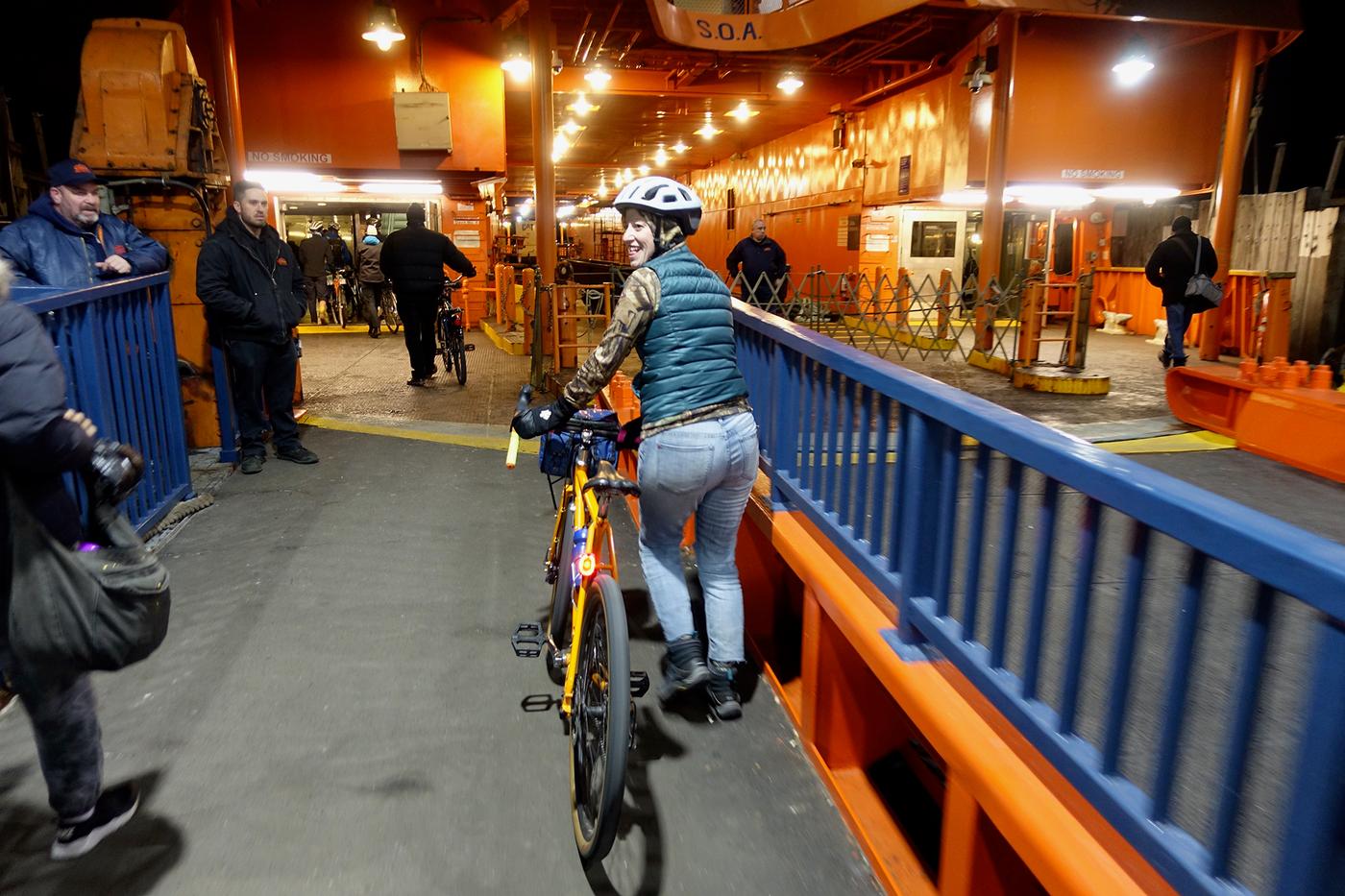 Instead of taking a left out of the terminal, we took a right, indicating we were taking the scenic route. As to be expected, there weren’t many bike lanes on Staten Island, but at this hour, car traffic was also scarce. And the vehicles we did encounter gave our brightly lit pizza peloton plenty of space—one passenger even pumped their fist out the window and shouted words of encouragement as they passed us.

Part of what makes night riding special is the ease at which one slides into the zone. Less light means less to see, which means you can focus on pedaling to the thirty feet or so that’s lit up in front of you. It’s unclear who was first to push the pace, but by the time we hit the first real bit of elevation gain, the whole crew was hammering up the hill as if prize money and eternal glory were at stake. 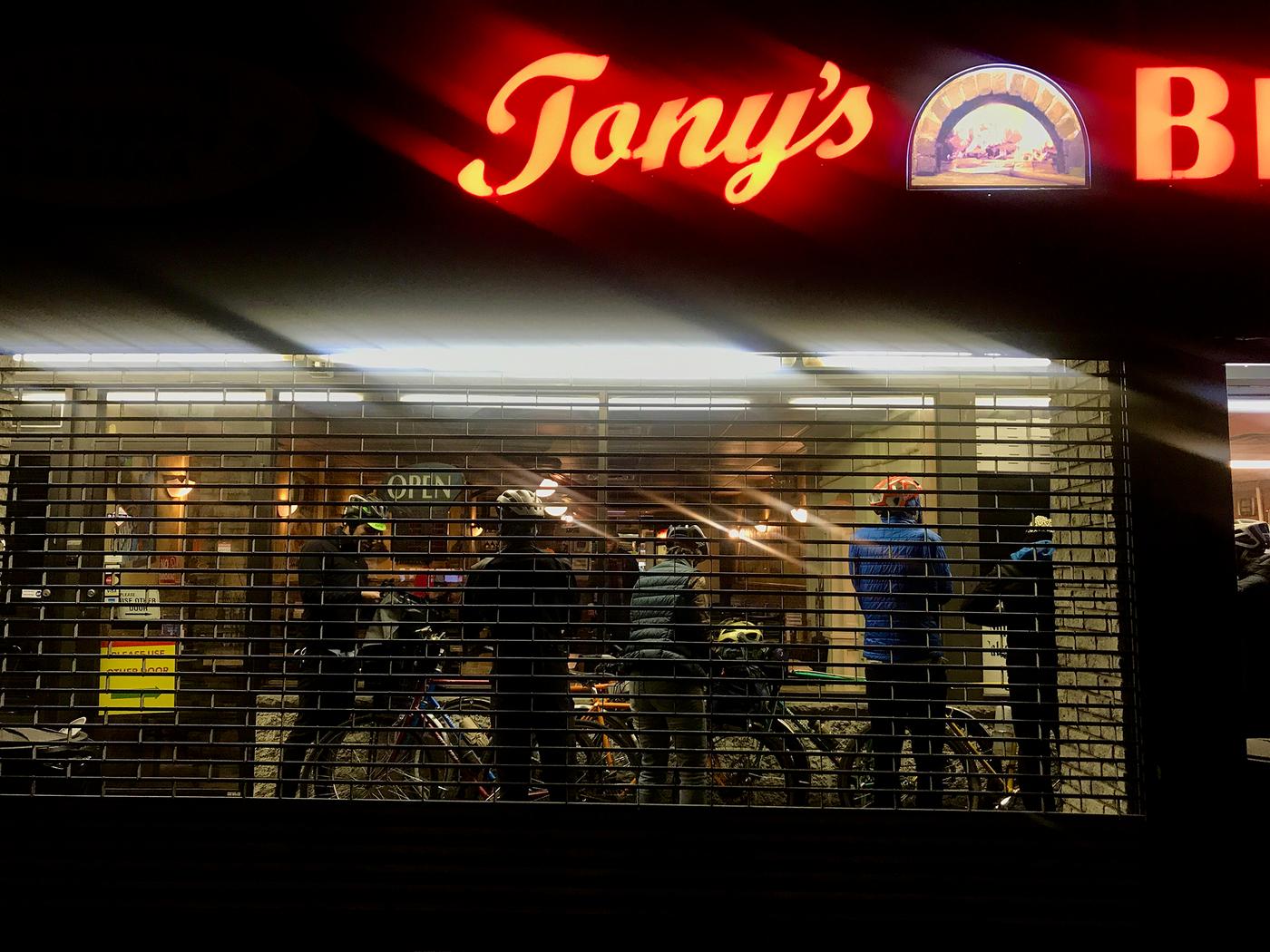 Huffing and puffing from our over-insulated outerwear, we crested the first climb and took a quick break at Silver Lake Park to make some wardrobe changes while taking in some greenery and wine before bombing down the back end with equal gusto. Through an intoxicating combination of speed, darkness, and well, intoxication, our pack of buzzing freehubs took on an orchestral quality, evoking Wagner’s Ride of the Valkyries, which remained stuck in my head for the rest of the evening. We then resumed climbing to the top of Todt Hill, which is both Staten Island’s tallest peak and its wealthiest neighborhood. From the summit, we descended as quickly as gravity would carry us, speeding through rows of McMansions along winding roads to our first pizza destination. 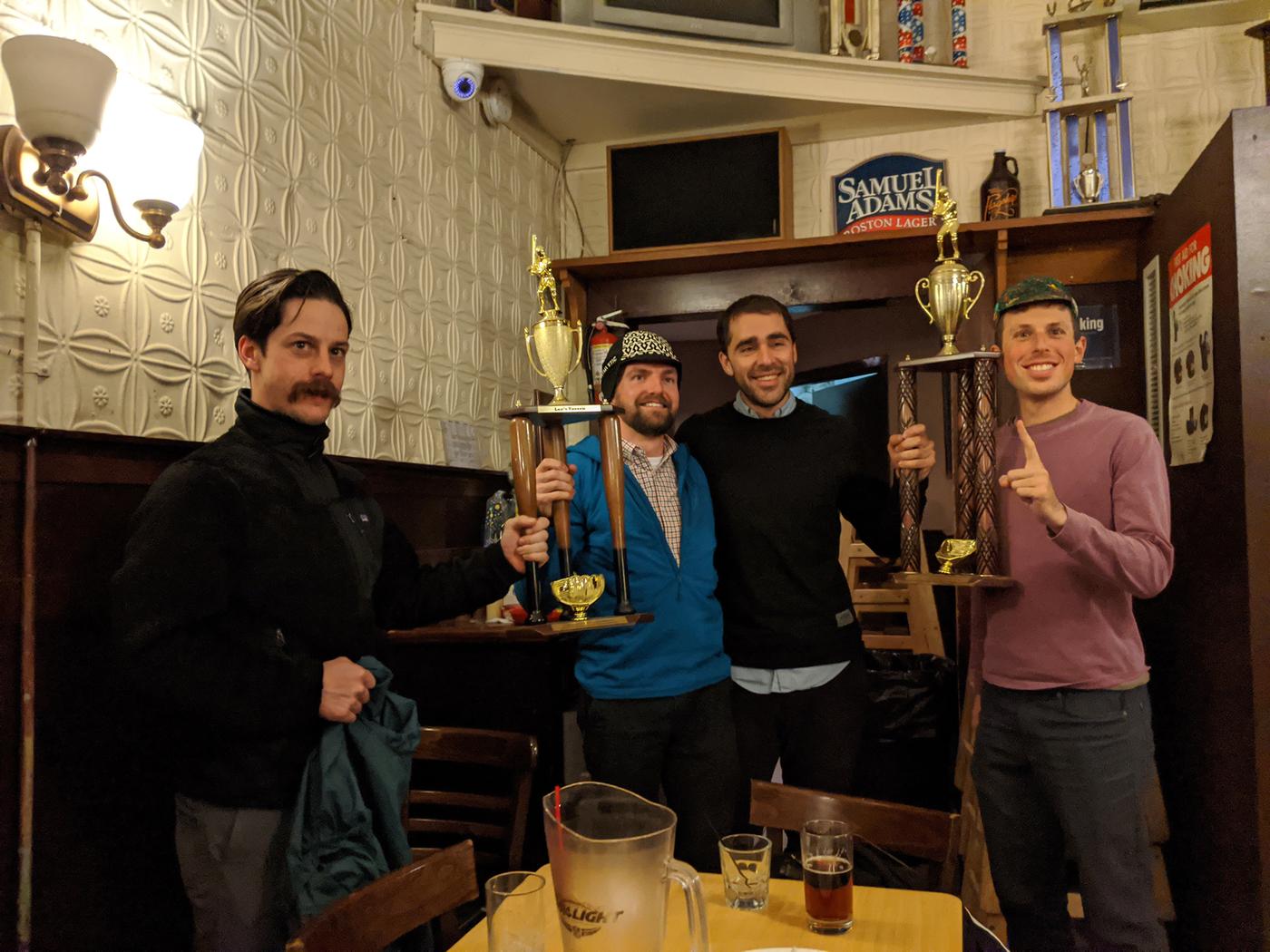 Lee’s Tavern is first and foremost a drinking establishment, complete with customized neon Coors and Budweiser neon signs, decorative mirrors hanging from wood-paneled walls, and dim lighting to facilitate views of the multiple flatscreen TVs showing various sporting events. But stepping through the Thursday night football crowd and turning a corner past the bathrooms reveals a dedicated dining area packed with long tables, serving a paragon of what Eater calls “bar pizza” in their guide to regional pizza styles. 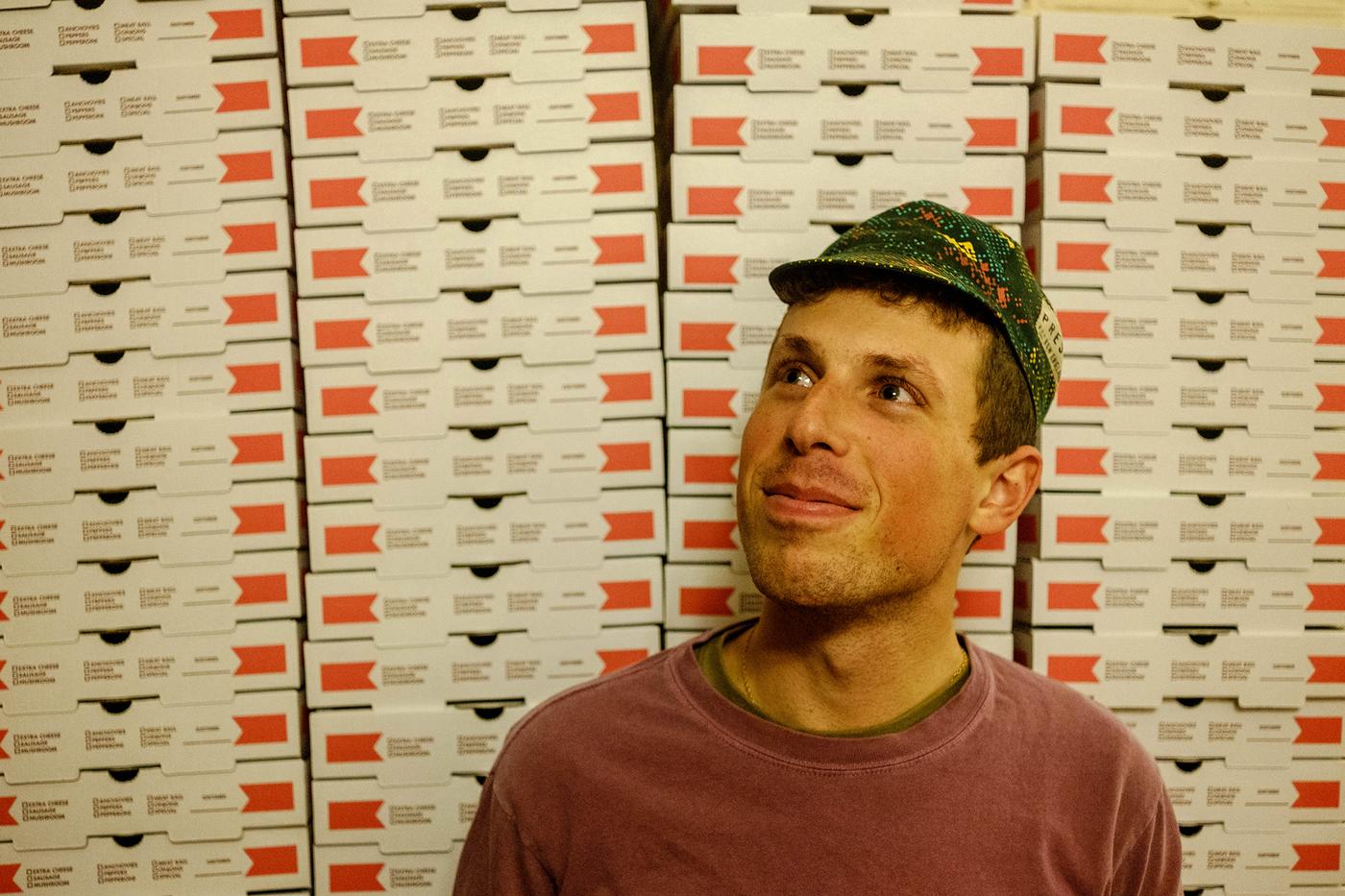 In most Staten Island establishments, leading with the phrase, “We’re with the NYPD” results in exceptional service and maybe a free round of drinks. When Adam said it on behalf of a bedraggled looking bunch of helmet-haired schmucks, all he got was an inquisitive look from our server that stayed on her face, even after he explained the acronym. Perhaps this failed attempt at humor was related to the delayed delivery of our pizzas, but when they arrived, the pies were more than delicious enough to absolve the wait. 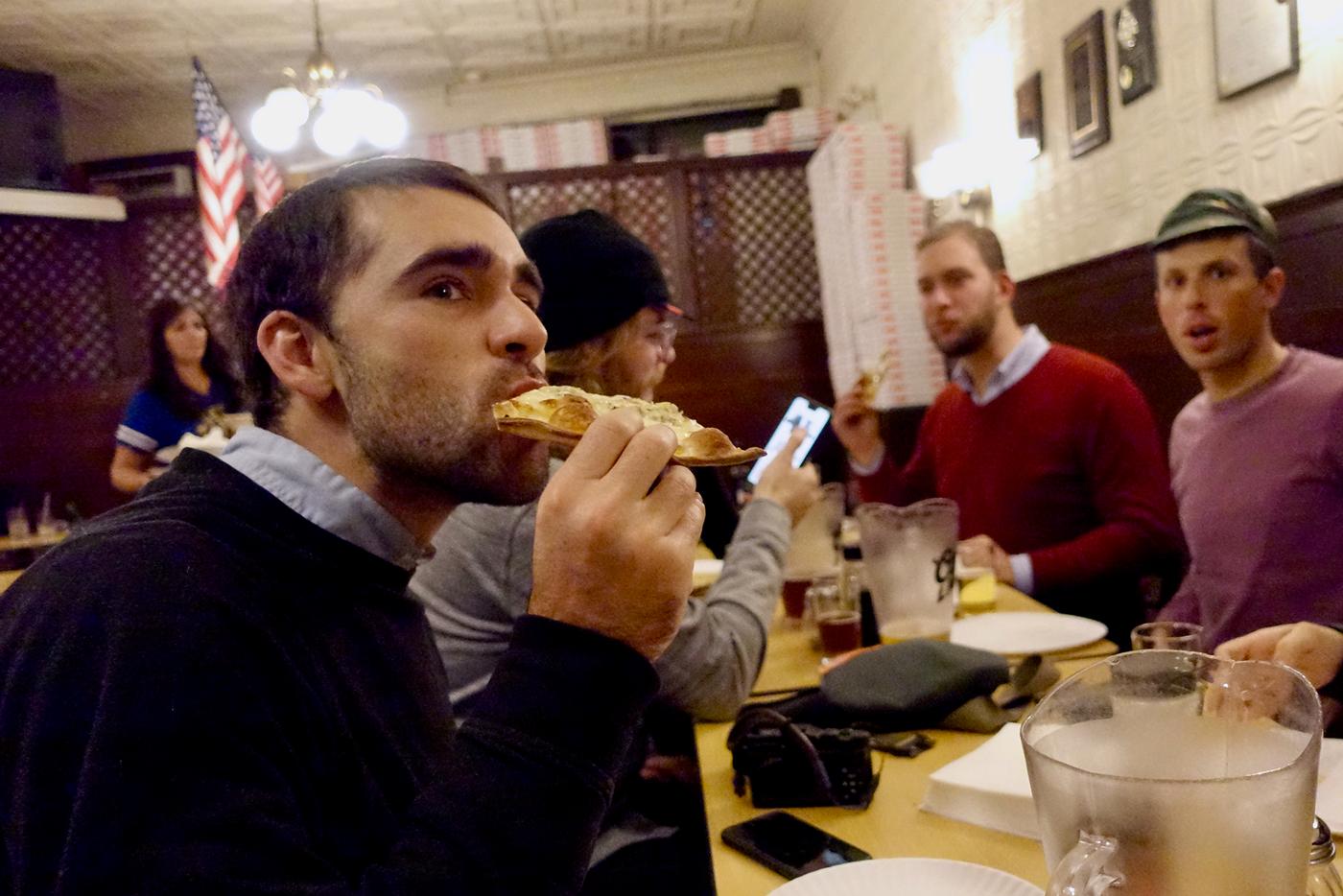 Most “New York style” pizzas are very large (at least 18” in diameter), floppy, and a crisp bottom, underneath a chewy, thin layer of crust. If you don’t fold your slice while eating, it’ll flop down, releasing all its toppings onto the floor. The “bar style” pizzas at Lee’s are smaller (closer to 15” in diameter) and are able to maintain that crispiness through to the sauce. You can hold it by the crust, without folding, and it’ll still hold its shape. From first to last, each bite packs a distinctive crunch, followed by just enough chewinees to keep it from feeling stale like a saltine cracker. It’s like the best-imaginable version of the $3 thin-crust microwave pizzas you can get from a freezer aisle, with none of the associated sadness. 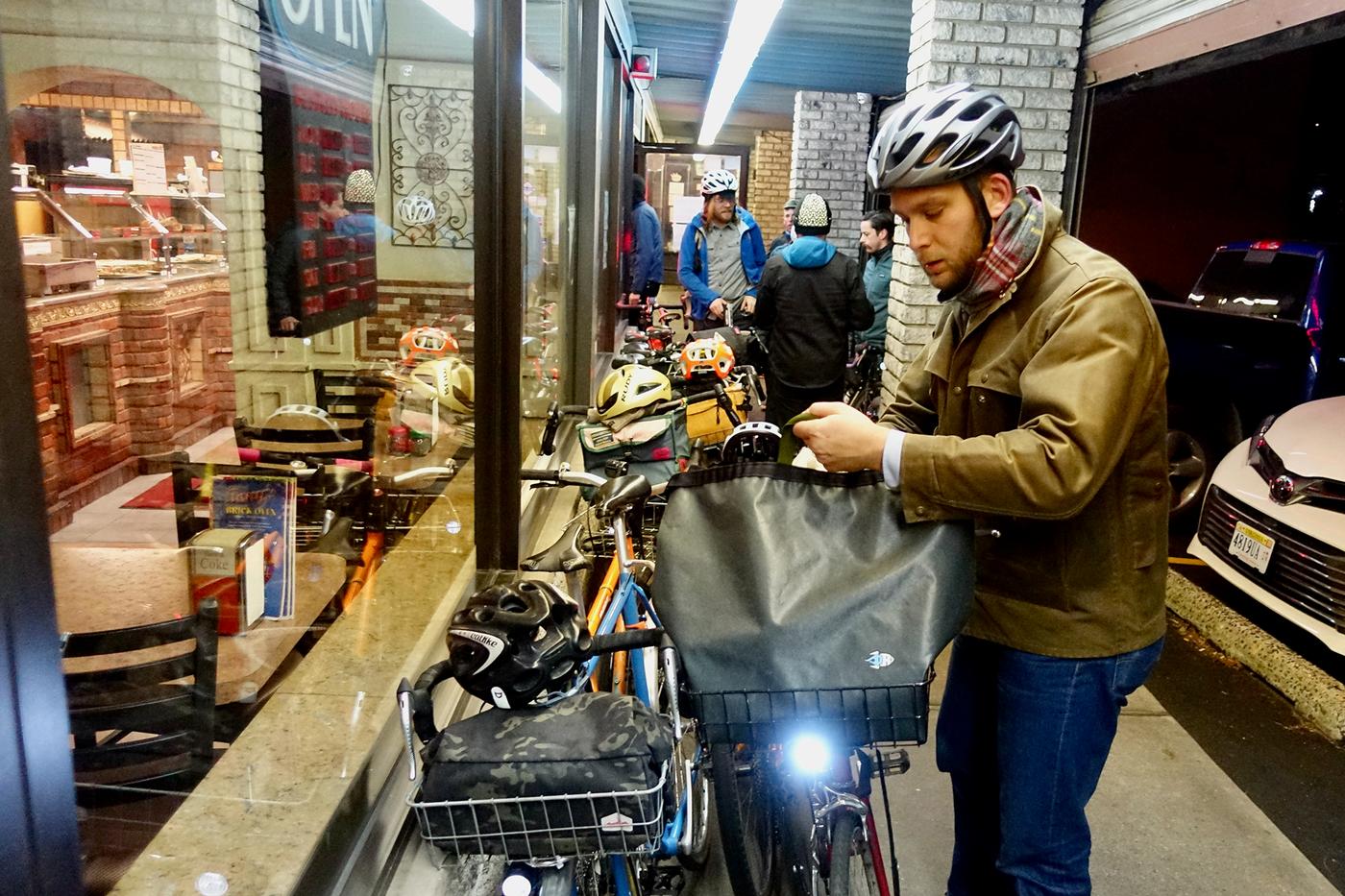 Four pizzas and three pitchers of beer later, we were back on our saddles, zooming up a carless greenway alongside public beaches we couldn’t see. Buoyed by a stiff tailwind, we averaged 28 mph as we passed under the aforementioned cars-only Verrazano Bridge. Shortly thereafter, we found our way to Tony’s Brick Oven Pizzeria on Bay Street at precisely 9:32PM, long before the 11:00PM closing time listed on their website. 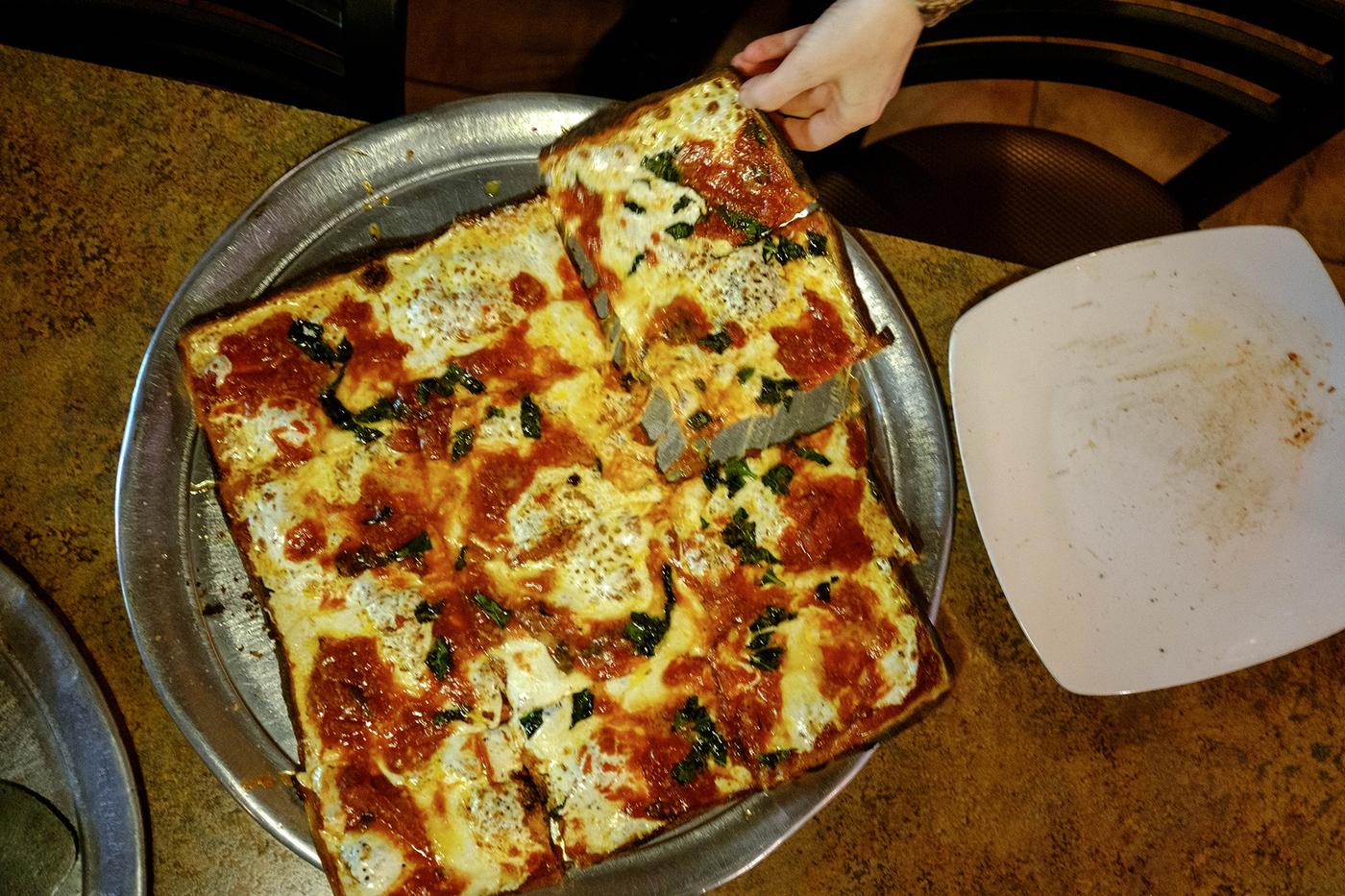 However, much to our embarrassment, our waitress patiently informed us that their website was out of date. Tony’s actually closes at 9:30PM. We insisted that we were happy to leave, but she would have none of it. We ordered four pies and three carafes of wine, received them in no time, and dispatched them just as quickly. The square-shaped “grandpa pie” stood apart for its ability to maintain a surprisingly crisp crust beneath heaping spoonfuls of red sauce and generous gobs fresh mozzarella. After tipping generously on account of our tardiness, we headed back towards the ferry with no fewer than eight slices in each of our stomachs. 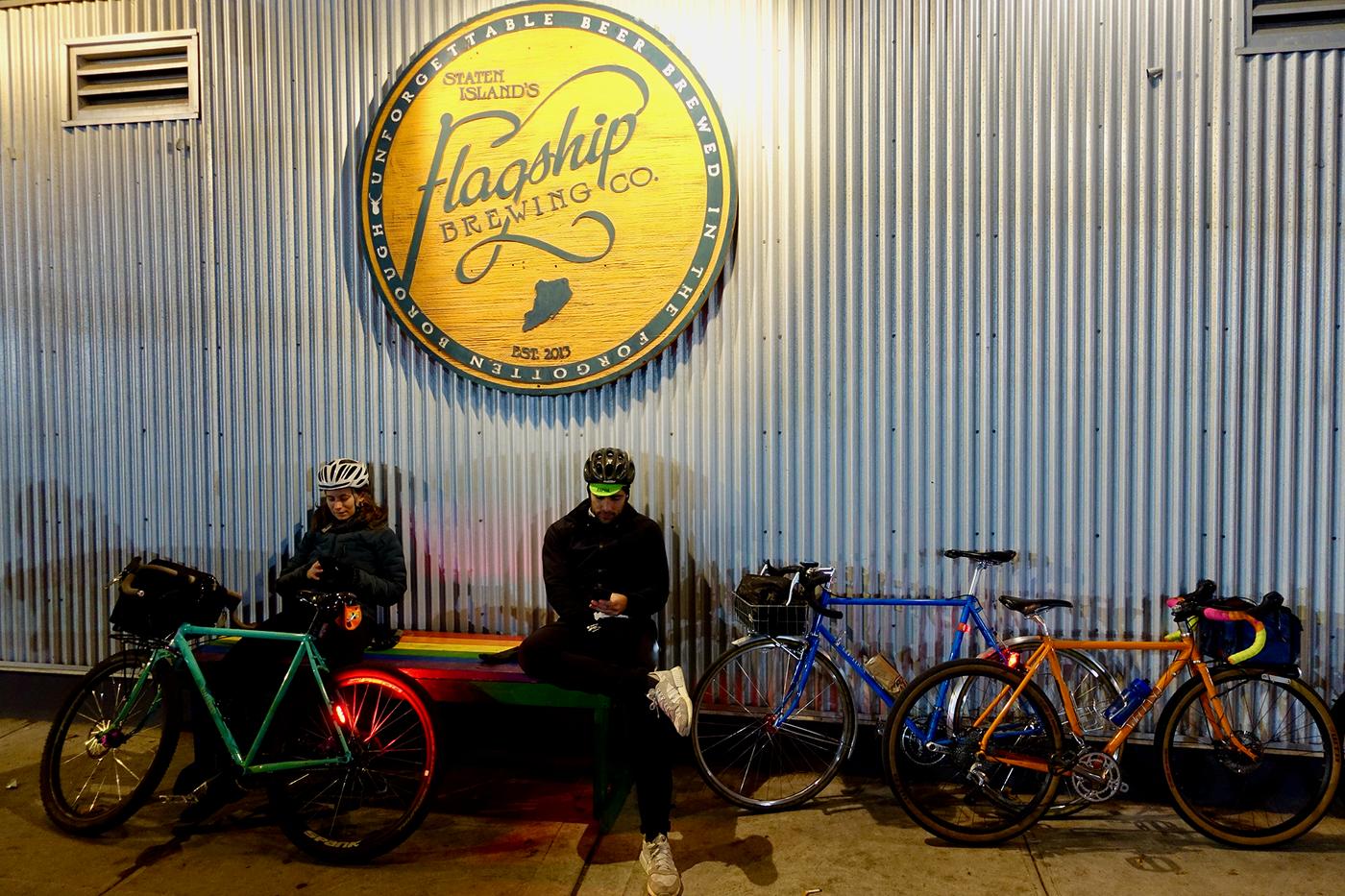 One of the best parts about the Staten Island Ferry is that passengers are free to drink alcohol. In fact, the onboard concession stands will even sell you a cheap beer at a steep premium. Rather than go that route, we stopped at Flagship Brewery, which is located a stone’s throw from the terminal. After picking up a few four-packs of tall cans—including one of the aptly named Pizza Rat Pilsner—we made our way to the terminal to catch the next Manhattan-bound boat. 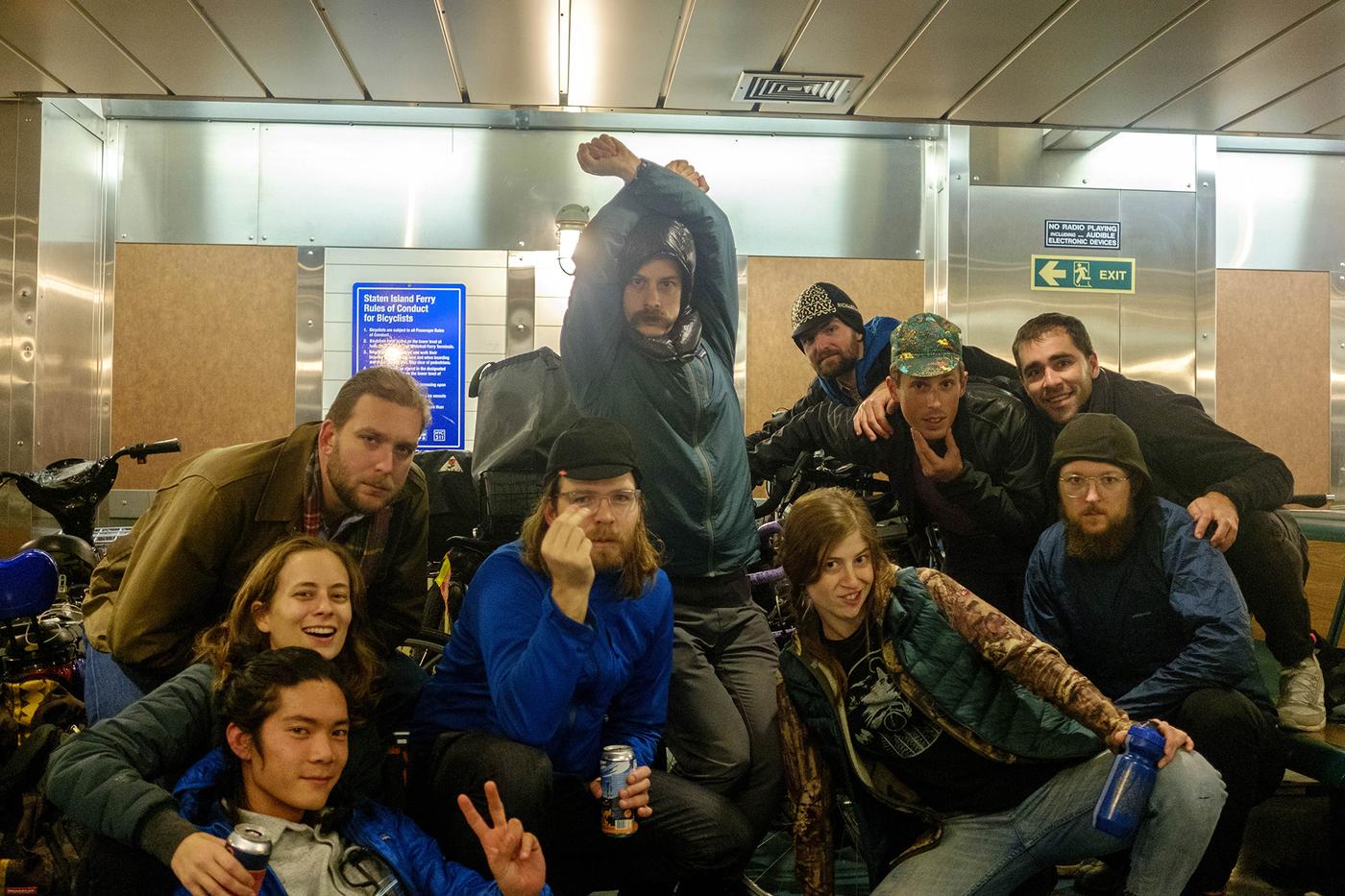 On the other end of the ferry ride, nearly 5 hours after setting out, we said our goodbyes, dividing into separate Brooklyn- and Queens-bound groups, lights shining brightly the whole way home, undiminished by battery life limitations.