I went to grade school in Chico with Jeremiah and still have a very distinct memory of us running laps around the field at Citrus Elementary. He still has some cartoons I drew of a triangle guy riding a skateboard from back in those days. So it’s a real trip that after all these years, and what feel like many lifetimes to me, life has come full circle and I now find myself riding bikes and going to shows with him all the time in Chico. He almost always answers yes to the last minute “Swimming hole ride after work?” texts I send out, and as a long-time Chico rider, he knows all the cutty local trails.

Even stranger and cooler is how worlds collided in the best way when Jeremiah recently bought a bike built by my homie Cameron Falconer, so now we ride to the creek on our Falconer cruisers together. As a klunker aficionado and all-around dude-who-has-his-priorities-right, I can’t think of a better person to own this bike. But why is this bike called a “Champion Tribute”, and how did it come to be? “I built this bike for myself when I began using a different welder.” Cameron explains. “My old welder broke and I wanted to get used to using a different machine on something that wasn’t paying work for a customer. This was also a really good excuse to build a frame with the pierced Champion/ Pro-Cruiser downtube detail.”

Wait, what’s this pierced Champion downtube all about, and what’s the big deal? “As far as I know the pierced downtube was first done at Champion Racing Frames in Hayward, California in the very early BMX days.” says Falconer. “The claim is that it’s stronger, and I think it likely is. Being that it was something I had wanted to do for years, I had built it up in my head to be more difficult than it was. In the end, it ended up being pretty easy and I think it came out really nice.” Here’s what BMX Plus had to say about this fabrication method in the April 1976 issue of their magazine:

“Over a year and a half was spent in experimenting with different styles designed around one constantly remaining feature: the original Champion’s dual front triangle. From a visual standpoint, it appears as if the middle-gusset tube is connected only to the down tube and seat mast. Don’t be misled. The gusset tube actually extends through and is welded to the head tube. To accomplish this, all the tubes are jigged up in a fixture. A welder then “tacks” the gusset tube to the seat mast. The down tube is carefully slipped rearward along the gusset tube to expose the head-tube/gusset-tube butt joint. After that joint is welded, the down tube is moved back into its position and welded. From that point, the frame is 100% welded in the jig.

The objective of the dual triangulation is to spread out the concentration of stress loads in the most efficient fashion. To do this, the gusset tube has to be connected directly to the head tube and triangulated with the top tube where it ends at the seat mast. Any other arrangement would not be fully effective. Champion’s dual triangle gives it perhaps the best strength-to-weight ratio going.”

The fork on Cameron’s cruiser was made in the USA for 26” BMX bikes by S&M, and Falconer welded on the disc brake tab. One of the hallmarks of Cameron’s bikes are his obsession with geometry, and even this bike was well thought out. “This was the first 26″ wheeled bike I had made in ages. It turns out that the fork has a short offset (33mm), which leads to more trail and stability. I was guessing the small wheels would feel odd after something like 15 years riding 29″ bikes, but riding the small wheels didn’t bother me much. The combo of the short offset and a 67.5 head angle worked out really well. The trail number is 103mm which is well within the new big-wheeled normal.”

So why did he end up selling such a cool bike? “I have too many bikes. I’m soft, and one-speeding feels hard these days.” When Cameron sold this bike, he offered it as a full build with some odds and ends parts he had laying around the shop (including almost an entire mismatched PAUL Component Gruppo). He also offered to powder coat the bike whatever color the buyer wanted. Jeremiah thought hard about this, and the decision solidified in typical Jeremiah fashion. “Choosing colors is hard for me because I have some color blindness. I thought the original paint looked good dark from Cameron’s original Instagram posting. I was debating between a midnight blue type of color and a Doc Marten ‘Oxblood’ type color.  I was cleaning the parking lot at work while thinking about it and found a Doc Marten box filled with K Cup coffee pods.  It was weird and my coworker and I were debating trying to make coffee out of them.  I decided it was a sign that I should go with the Oxblood color. Cam gave me an Oxblood sample, but I didn’t like it and found another color I liked better called Houston Burgundy (which I thought looked more like Oxblood). I once had a pretty magical time driving through Houston late listening to DJ Micheal “5000” Watts’ chopped and screwed radio show. So that helped me deal with a color called Houston Burgundy.  Now I think it looks a little more purple than Doc Martens, but it’s perfect.” 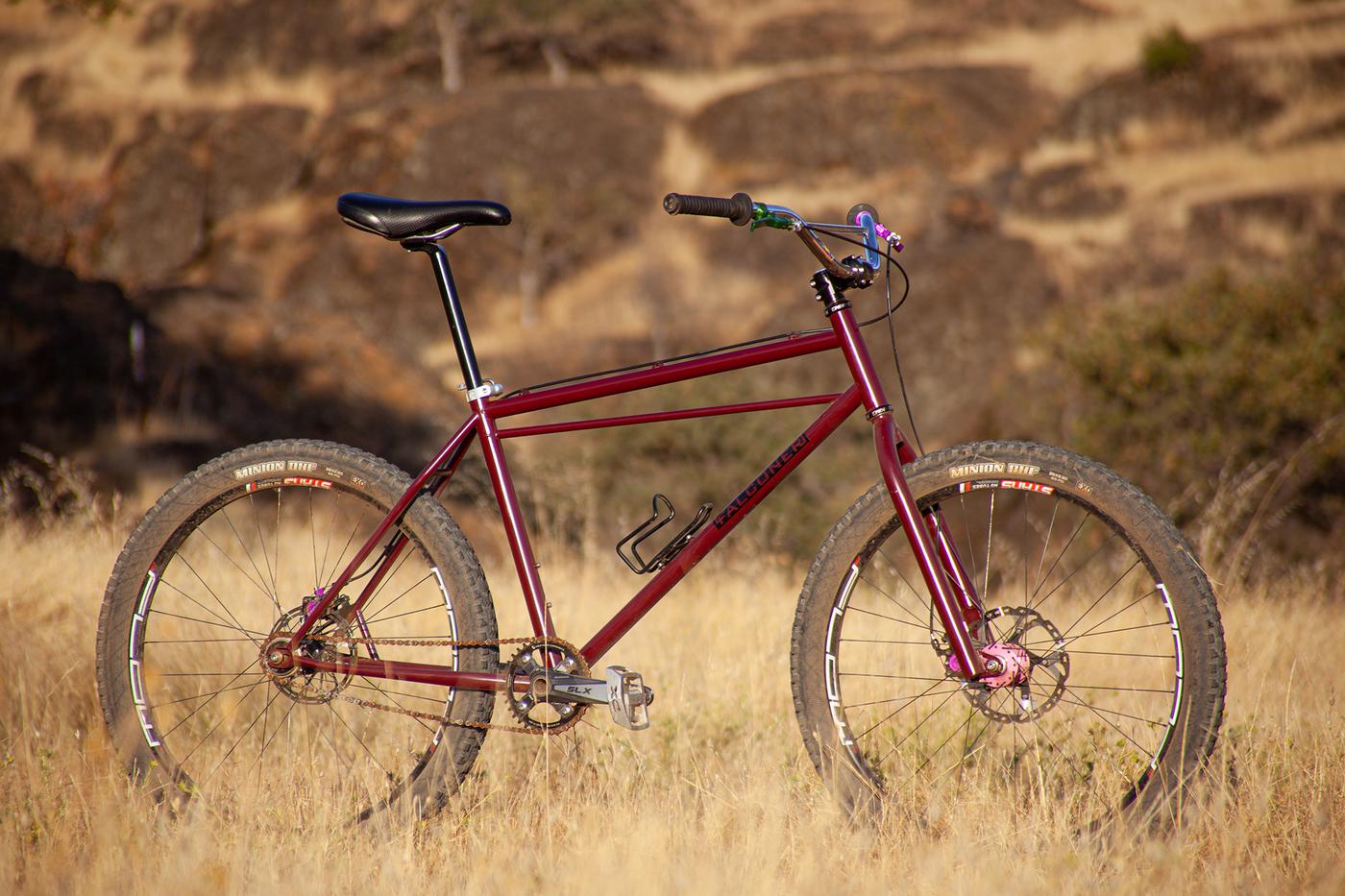 I can’t think of a better match in the world for this unique bike than this awesome human. Summer’s not over, come take a shred to the swimming hole with us.