Held in late April in far western Brittany, the race covers 205 kms of the beautiful Bretagne countryside, including 27 sectors of ribinou, narrow dirt roads that wind through woods, farmers’ fields, over hills, along the sea and even through tunnels. The weather is typically Breton: the riders face rain, dust, mud, sunshine and strong winds from all directions in the course of the race. 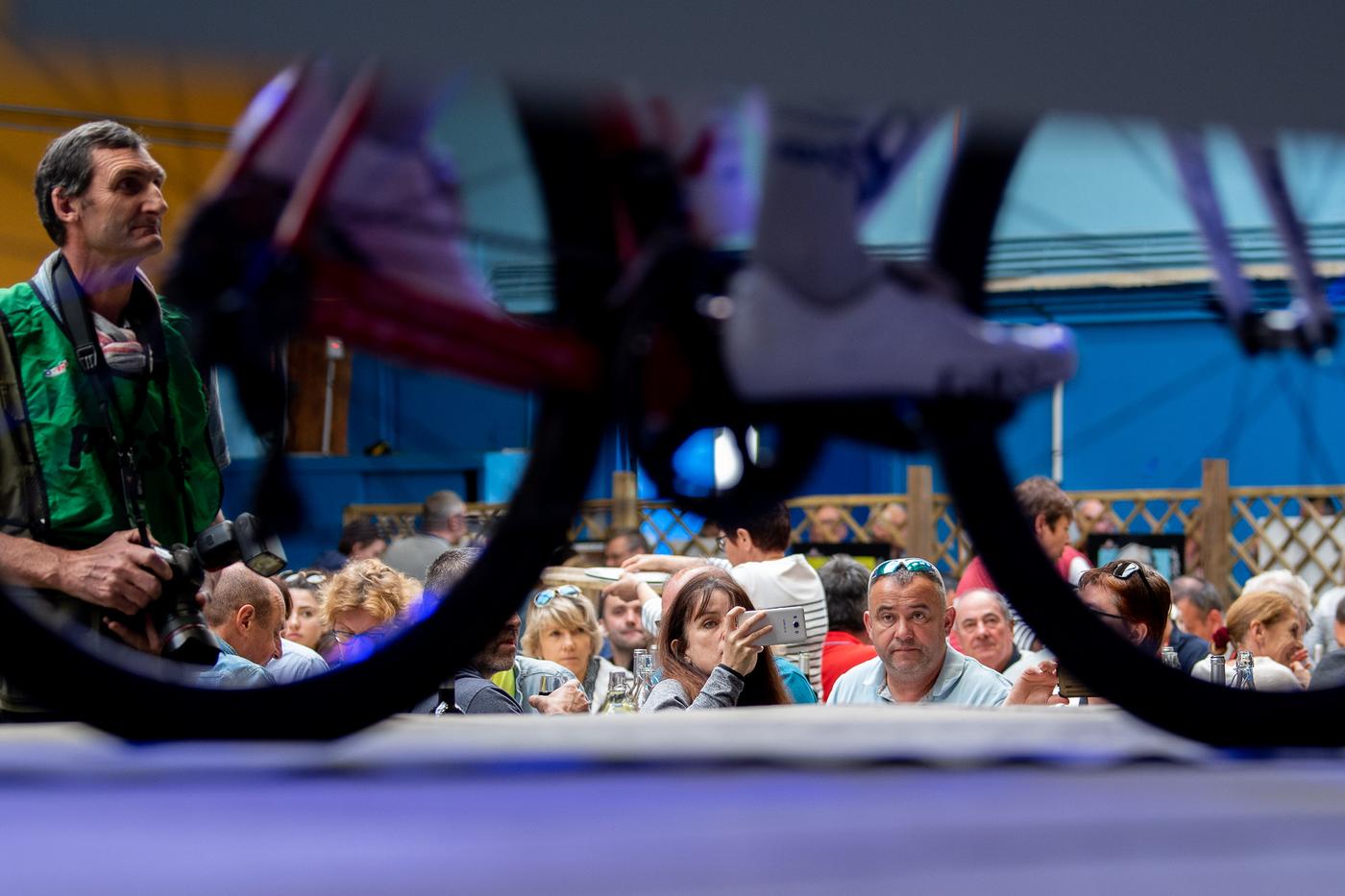 The day starts at the sports hall in Lanillis. VIPs gather for a breakfast of local specialties. Lots of pork and lots of wine and cider. The teams are introduced on stage by Daniel Mangeas. Now in semi-retirement, Mangeas was the voice of the Tour de France for 40 years. He quickly rattles off the palmares of each rider and points out which are Breton. A few lucky riders get to hold the piglet that will feature later in the day. When the presentation is over the teams head to the start and the VIPs head to the buses that will shuttle them around the course.

I typically don’t plan much in advance for these French races but after some missteps last year, I spent lots of time with the route map and timetable. The riders will be on paved roads for a good hour or so including a long neutral section before they hit the first ribin. I’ll get shots as they roll out through town and then again at a spot in a village about 30kms into the race. It feels strange to be photographing this peloton on paved roads but with so much time before the first dirt, I have to do something.

Finally, I am on to Ribin 1. It looks like a not-very-well-maintained bike path that winds along a low-lying marshy and wooded area. We are well outside the towns but there are still fans waiting and some sector-hoppers with spare wheels. The locally-based teams like Arkéa Asmsic, and Vital Concept have an advantage in being able to recruit friends and family members to hop around the course and wait on the ribin with wheels. While each team has several support cars in the race it is often chaotic and in the dusty conditions, it can be impossible to spot a rider who needs assistance. 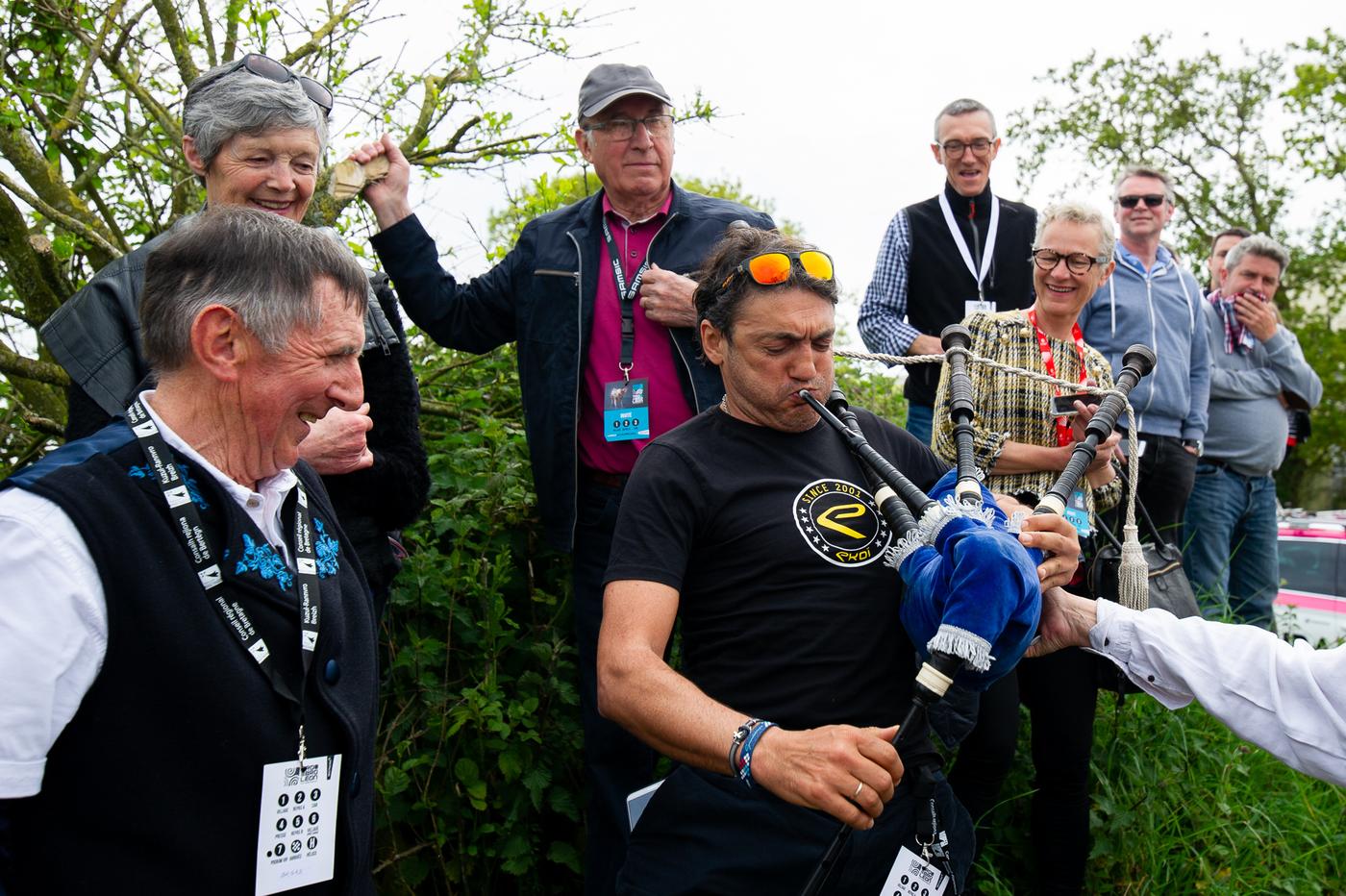 After the riders come through I am headed for Ribin 3. It’ll be close but I should – and I do, make it. The route map provided in the tech guide is a bit vague. But even if you don’t know exactly where the ribin are, you can usually find them if you can just get close. There will be lots of cars parked on the nearby roads and sometimes, as happens in this case, you can follow the sound of the bagpipes. El Diablo, Claudio Chiapucci, is here watching. After the pros (pipers) are done, he gives the bagpipes a try. That’s all I’m going to say about that.

I’d planned to hit Ribin 7 next but I realize as I get close that I am well ahead of schedule and so I head to number 6 instead. This turns out to be a major stroke of luck. Ribin 6 is up on a hill overlooking the sea. I’m able to get shots that include two elements that eluded me in 2018: the water, and the huge wind turbines that dot the coastal areas. After the race passes it is on to Ribin 18/24. 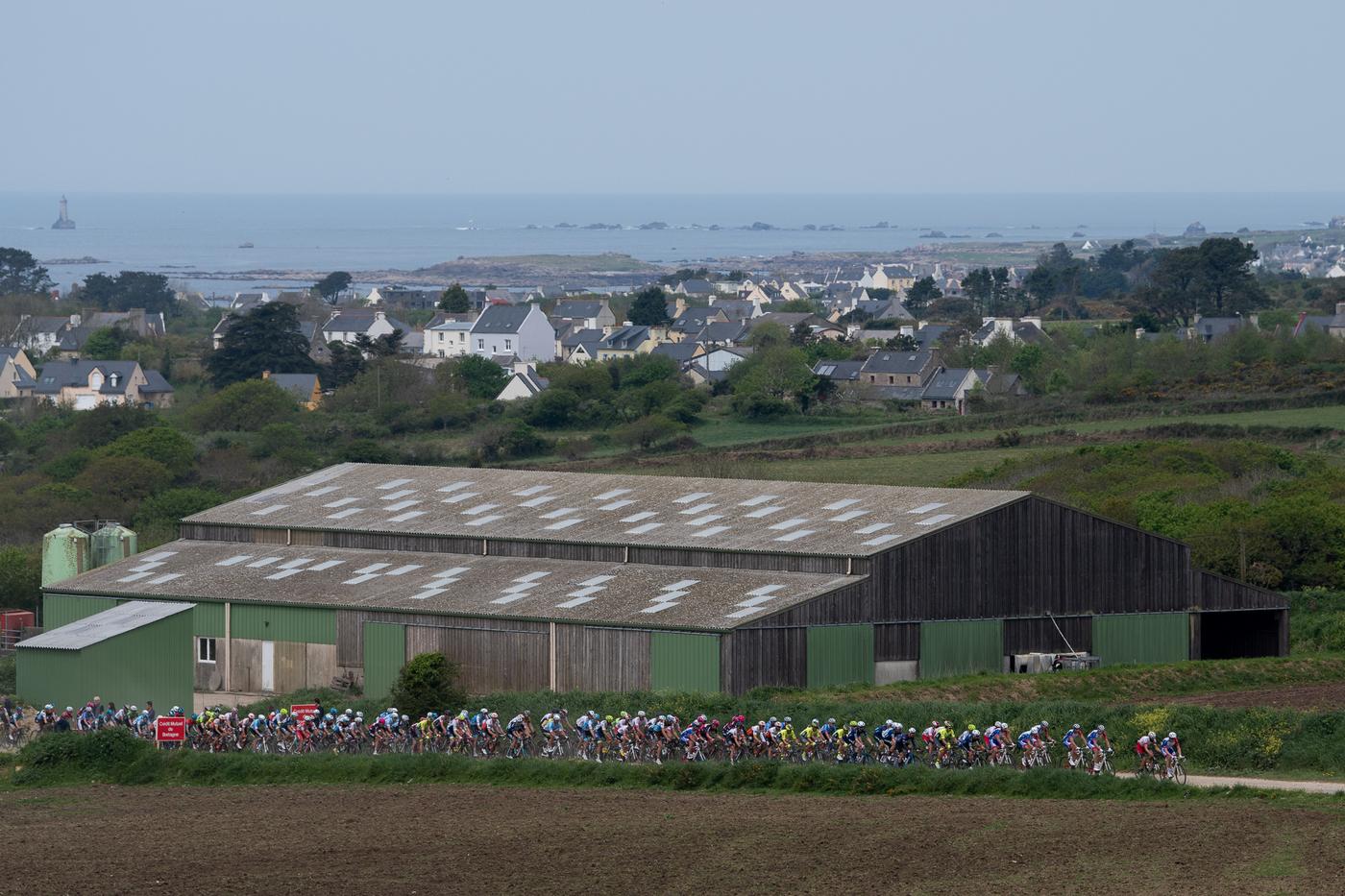 The countryside and especially the coast out in this part of France look a lot like Ireland. And at times it can sound like it too. Over 200,000 people in this region speak Breizh, a Celtic language, as their native tongue. Nearly all of the directional signs on the road are in both French and Breizh. Much of the unique character of this race comes from its embrace of the heritage of the region. This particular slice of Brittany is called “Pays de Léon” in French or “Bro Leon” in Breizh. Hence the race is Tro Bro Leon or: The Tour of the Country of the Lion.

I am skipping a lot of sectors in order to get to 18/24 in time. This sector includes the famous tunnel and also a wooded section with a chateau. Since the race hits this part of the route twice I’ll be able to get each distinct part and also, I hope, make it to the finish in time. Something I didn’t pull off last year. The tunnel is farther from my parking spot so I head there first. At the entrance to the tunnel is a large sign featuring a drawing of three men including one who is flipping off the viewer. There’s a large picnic happening next to the sign. I learn that the men on the sign were all friends who worked on the race and who all passed away in the past year. The picnic is a gathering of their families. In Breizh the sign says: “Is there light at the end of the tunnel.” I’m really affected to learn about the passing of these three friends but soon the race arrives and snaps me out of it.

It is chaos as the race approaches the tunnel. The earlier break has been caught and the peloton is spread out in small groups, many of which are mixed in with the support cars. The last 50 meters before the tunnel are a mix of thick dust, car horns, squealing brakes, and screaming riders. One rider flats right in front of me and his teammates radios the team car. This is maybe the worst place on the entire course to need a wheel change. Surely his day is over. 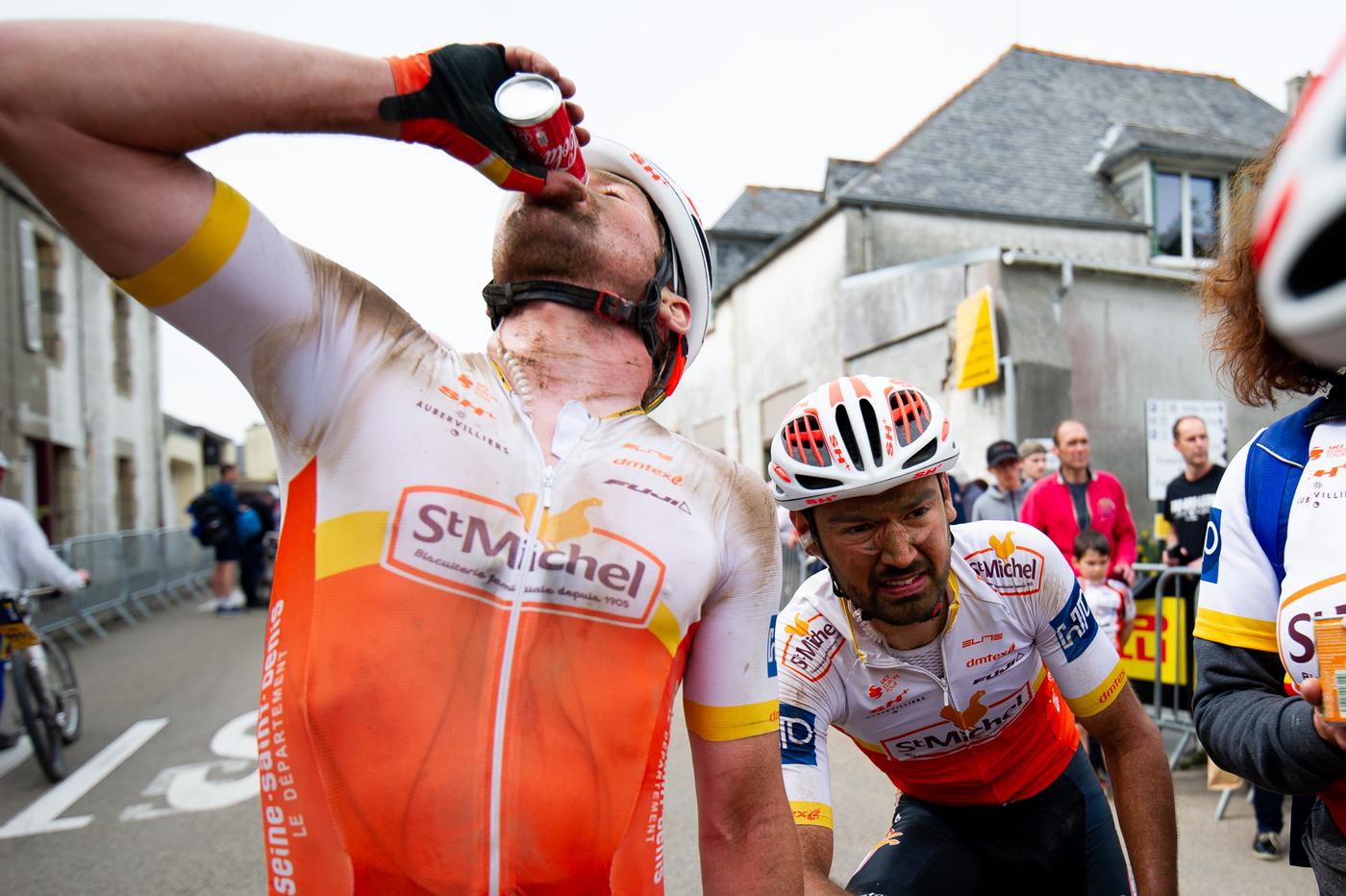 As I walk to my second spot on this ribin I am passed by lots riders who are just riding it in. They are covered in thick dust and many of them look seriously miserable. Even the moto drivers look like maybe they have had enough. I make a tactical error on this section when I decide not to walk all the way to the chateau. I’m worried I won’t have time to get to the finish but as it turns out I have plenty of time and I’ve passed up a much better background. I make a mental note for next year.

In Lannilis Italian rider Andrea Vendrame wins in a sprint from the reduced bunch. Having a non-Frenchman win seems to deflate the crowd a bit. A non-Breton is one thing…

After the race, I find Simon Jones by his team cars. The 19-year-old Wisconsin native is riding for Interpro Cycling Academy, a French-Japanese continental level team. He is the only American riding Tro Bro Leon this year. I’ve seen Jones racing at many crits and road races around the Midwest but I’ve never introduced myself before. Something about being the only American photographer and the only American rider makes it seem necessary. He tells me was feeling good but had a crash and mechanical at 60 k to go that ended his race. That seems like a fairly typical Tro Bro Leon story. You need good legs and good luck just to finish. Next, I’m off to the podium.

French podium ceremonies can go on for a while. There’s always another category to honor. Tro Bro Leon is part of the Coupe de France and so there are overall leaders as well as leaders from the day. Top climber, most aggressive, young rider. I assume anyway. I can’t understand most of what is going on. But finally at the very end the prize everyone has been waiting for appears. The top Breton is awarded a piglet. This year it’s an especially squeally one and Romain Hardy, who finished fourth overall, seems to struggle a bit with it. But after 205k lifting, a fat squirmy piglet up is a lot to ask.