Last year, Rue propositioned me about helping her document the Tour Divide race in which Lael Wilcox intended to best her previous record, I jumped at the opportunity. Later, Jay Ritchey would be added to the team to help Rue with the film they intended to produce about the race.  I was tasked with focusing on photographing her attempt and the race itself.  Rue has been flipping between photo and video very deftly and has some incredible images to add to this gallery.  Here is the third installment of our ongoing coverage of the 2019 Tour Divide Race. After one of the most amazing sunsets I’ve ever seen setting over the Tetons, we had a two-hour drive around Togwotee and Union pass as they were still covered in snow.  We spent the evening in Pinedale, WY and woke up to barely catching Sofiane rolling out of town with a cordial “hello”… and he was gone.  After catching Josh Kato as he resupplied, we backtracked the route through the sweeping valleys south of the Wind River range.  Chris Seistrup was holding onto his impressive jump to third place, with Nate Ginzton, Steve Halligan, Josh Ibbet, and Evan Deutsch trailing.  Lael came rolling down Union Pass wearing her usual huge toothy smile, I’m truly surprised she didn’t have some dead bugs in her teeth.  We heard more than a few people remark about how hard and cold the passes had been.  Trudging miles through the snow in summer weather gear is beyond rough and with Colorado having record late spring snowfall things aren’t looking up. We roll back to Pinedale to catch the pack resupplying.  Lael is getting some maintenance at Pinedale’s new and only bike shop, Geared Up. Anthony is rushing around trying to get her all tuned while Lael yardsales her gear and resupplies food.  Turns out her eyes are bigger than her stomach. She offers the mechanic the leftover donuts and she’s off.  I roll out of town to try and catch the sunset on the Winds, Lael and the cows steal the show, I’m already planning my return to this place again.

Kai Edel rolls in late and we catch him at the Shell next to our hotel, he grabs a few bags of groceries and strolls over to get a warm bed and shelter for the evening, it will be below freezing tonight. We wake up and head down the highway to shortcut the route near where it crosses Highway 80 at Wamsutter.  We double back on roads that lead to a multitude of oil and gas infrastructure north of town.  Many of what I assume are some kind of exhaust valves look like small rocketships doting the rolling hills.  Chris Seistrup has comfortably taken his spot in 3rd place.  We catch him resupplying and he talks to Rue about his ride to raise funds and awareness of hemophilia. After a small crowd congregates and asks us why the hell we are filming some guy on a bike at a truck stop we roll back out into the basin and catch Steve Haggalin, then Josh Ibbet, and finally Lael.  Riding just 30 minutes out into the basin you truly get the spooky and awe-inspiring feel of this extremely vast landscape.  We run into Ryan and Rita who are touring the route north-bound, they ask us if we have passed Lael yet.  We turn them around since they had wandered off route and we’re excited to catch a glimpse for just a moment as she rolled passed.  They warned us of the mud and snow we should be expecting in Colorado just after Brush Mountain Lodge.  I wish them happy trails and mostly snowless passes ahead. 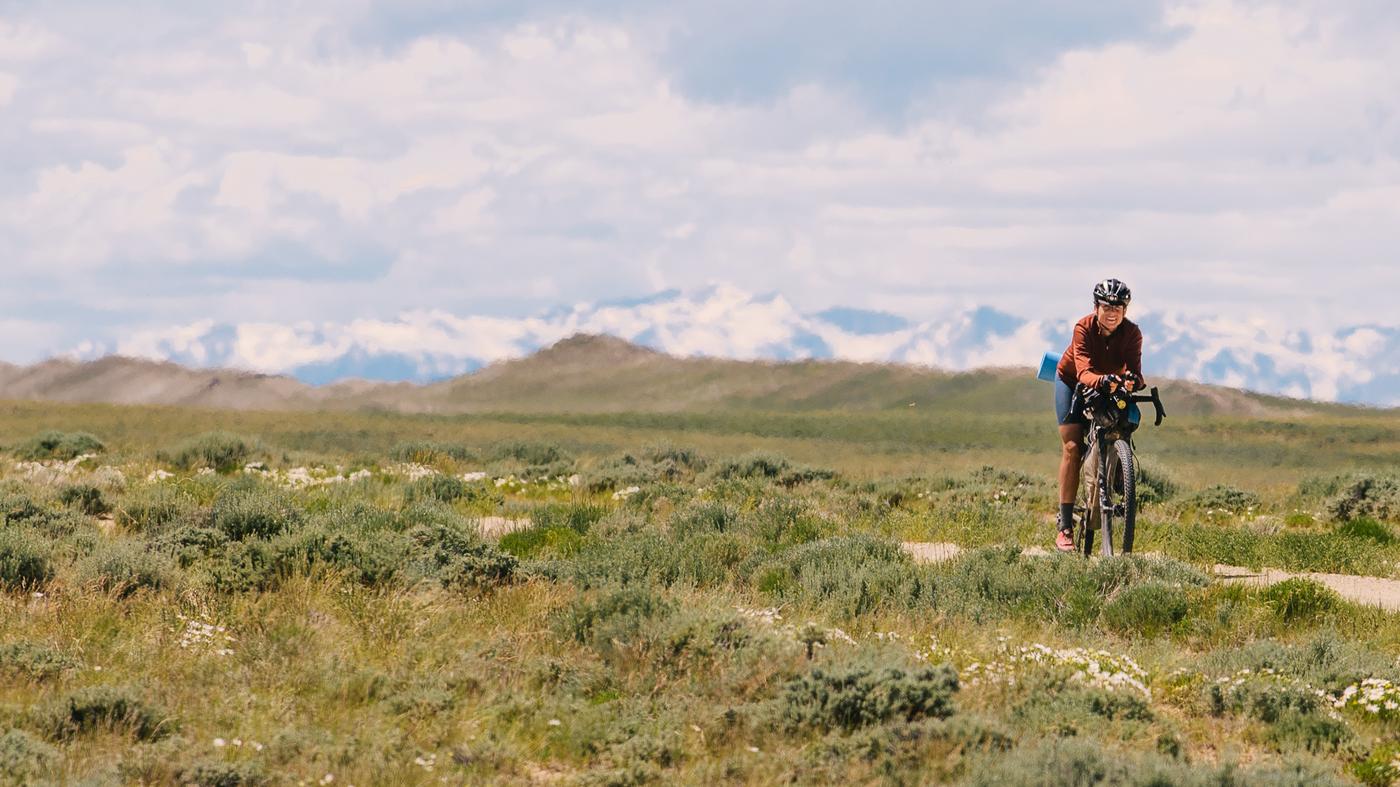 We roll down the highway toward Braggs, WY; after checking in at the Cowboy Inn, Jay and I double back to catch the fleeting light on the plains.  Josh Ibbet passes us as the light dies and just down the road, we catch Lael just as she is about to tuck in for the night.  She lays down for a minute to make sure the ground is acceptable before she rolls out her pad and ultralight bivy and she is out like a light.

After checking trackleaders over a very large cowboy breakfast we decide to roll around the pass that we have heard has tons of snow on it over to Steamboat Springs.  Hearing tales of snow and mud I pick up a pair of rubber rain boots just in case.  As we roll up the route toward Craig, CO we see a very bundled up Josh Kato coming down the road.  As he peels out of every layer he had on him he began to regale us with tales of his evening on the pass.  After pulling the plastic bags out his shoes, he asks us if Sofiane is ok, regardless of where he is, just is he safe.  Sofiane had attempted to cross the pass in the evening, difficult navigation and sub-freezing temperatures turned him back.  Josh Kato had seen his tracks moving around and possibly turning back, but it was a blizzard so everything was blurry.  Josh had tried to seek shelter in a cave and when he peered in he saw the two glowing eyes of a cougar.  Somehow he managed to bivy and sleep for a few hours before descending.  He looked rough but was still composed enough to take some questions from strangers jovially. We roll up the pass in time to catch Steve Halligan, Chris Seistrup, and Nate Ginzton coming downhill.  Chris flies past in a t-shirt and yells, “too slow!”  We check everyone’s dots and see that Lael and Josh have returned to Brush Mountain Lodge, and Sofiane is still there as well.  I have a sneaking suspicion that everyone is getting really cozy over at the lodge and won’t be leaving anytime soon.  After making a big circumnavigation of the pass the route goes over we arrive at the fabled Brush Mountain Lodge where Kirsten’s hospitality is the thing of legend for tour divide racers.  We find everyone except the top 4 that crossed the pass, laid up and wearing pajamas and brush mountain lodge shirts.  The mud just past the lodge was impassable due to the extra wet conditions.  The people who made it over narrowly dodged a midday rainstorm that soaked the road.  Kirsten is pumping out pizzas and keeping hands full of beers.  Everyone has succumbed to the vortex, I hear plans of taking off at 3am to let the mud dry and snow possibly freeze.  Everyone spends the evening reminiscing about the past week and other long routes they have ridden.  Thus the Great Brush Lodge Armistice of 2019 began, all of the top riders got laid up for the evening until they hoped the route would be passable.  Seven more riders cram in as they roll in late, they are equally surprised to hear that most of the lead group is still at the lodge.  A world away it seems, Chris Seistrup passes Josh Kato in the evening. This stretch of route has totally reshaped the race this year; just past the lodge is 13 miles of drive train ruining mud, 3 miles of knee to waist deep snow, all while gaining almost 3000’ ft of elevation and that is just this side of the pass, word is the other side is even worse… 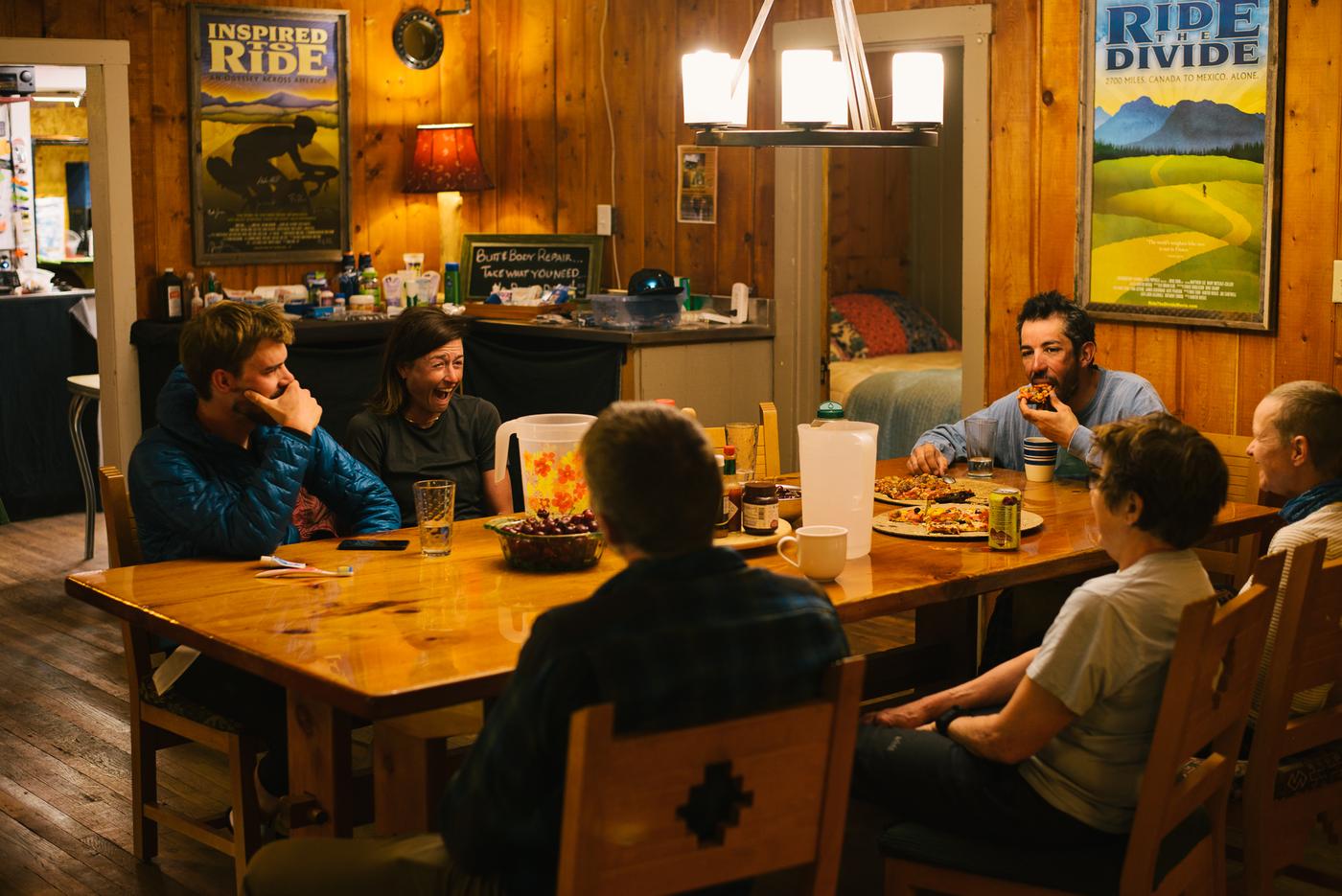 We wake up at 2am, the ground is wet but the sky isn’t dumping at the moment.  I tiptoe into the kitchen to see if I can help Kirsten with breakfast, and see a few of the hopeful racers starting to rouse.  Just as people are getting all packed up, the rain begins to fall, that rain turns to sleet, then snow.  Everyone despondently goes back to bed for a few hours with better hopes at 5am. At 5am, the snow continues to fall, blanketing the lodge and surrounding area, all hope of getting over the pass today starts to fade.  After a proper breakfast at a normal hour, I see Kai and Evan suiting up for an attempt, the Armistice is breaking.  I suit up in a free box pair of rubber overalls and rain boots and try to follow them up to the pass.  After about a quarter mile the mud is already building up, Evan is stuck, Kai seems to be making good progress. My bike’s chain gets sucked up and nearly rips the derailleur off, so I continue on foot and eventually turn around to push my insanely muddy bike back to the lodge.  Not long after me, the other two return as well, the mud has won again. I’d like to take a moment to truly praise the amazing environment that Kirsten has created at the Brush Mountain Lodge.  She would chalk it up to “lucky geography” but the rest is entirely her magic.  Everyone is greeted with a hug and as much food as they can hope to eat. No hand is left empty of a drink, beer or otherwise.  She has cabins to stay in and plenty of floor space if that is your thing.  She is tirelessly running between the kitchen and pizza oven because no one leaves her table hungry, no easy feat with Tour Divide racers.  For a section that lacks much hope for a proper meal or a welcoming place, Brush Mountain Lodge is truly an oasis. 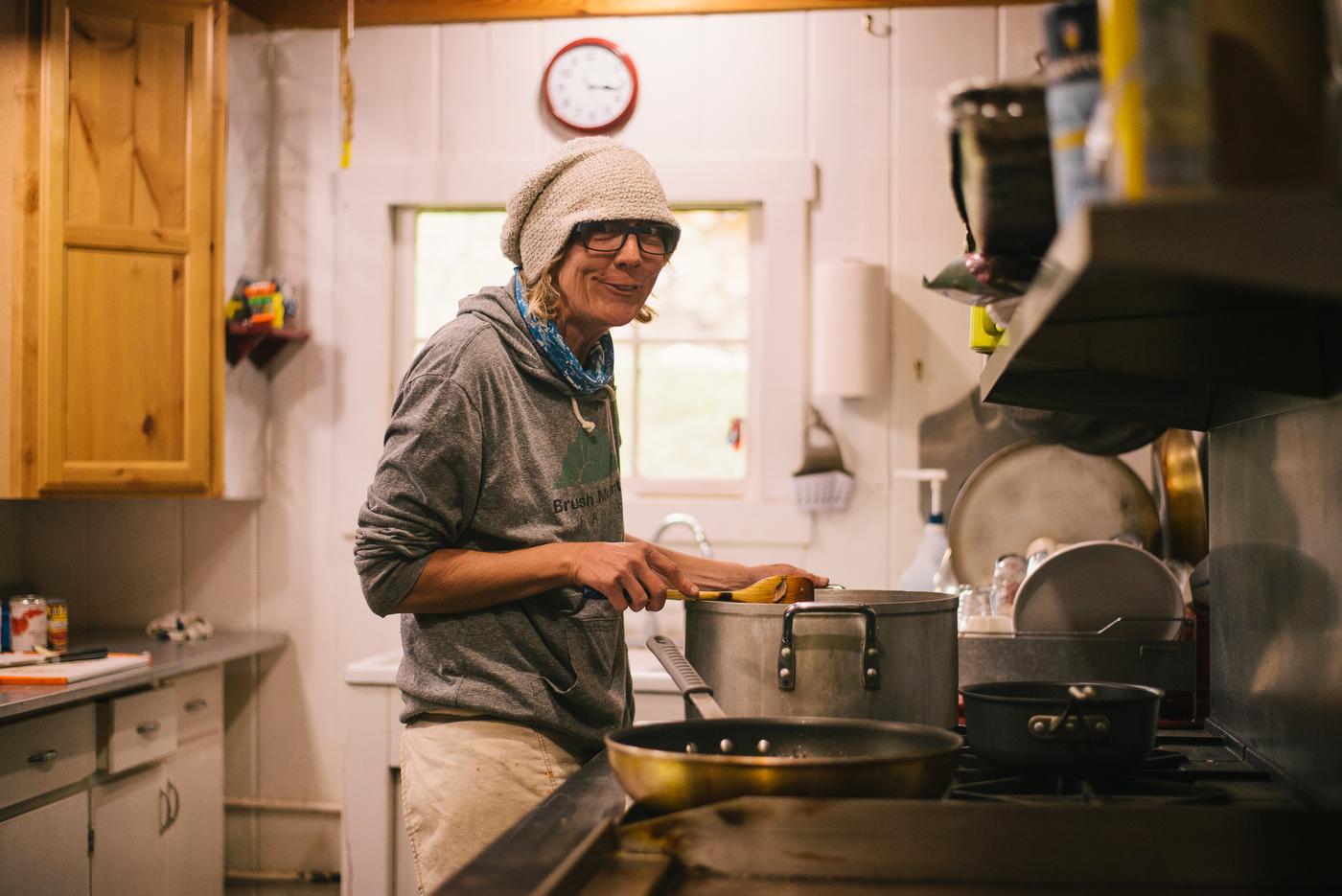 At this point, many of the riders who had been racing have given up hope of continuing on with the full race route.  Reroutes around the Rockies are being planned, some people are awaiting the mud to dry and carry on.  Lael is considering riding roads and rejoining the route in New Mexico and I even hear ideas of getting to Las Vegas from others.  People have fallen out of race mode and made peace with that fact, the vortex that is Brush Mountain Lodge is probably about the best place to be in such a case. Everyone has been lounging around sharing stories from near and far, it is a true spectacle to behold. I doubt this much talent in endurance bike racing has ever been assembled under one roof before. Everyone seems truly content and at least their bellies are full.