Last year, Rue propositioned me about helping her document the Tour Divide race in which Lael Wilcox intended to best her previous record, I jumped at the opportunity. Later, Jay Ritchey would be added to the team to help Rue with the film they intended to produce about the race.  I was tasked with focusing on photographing her attempt and the race itself.  Rue has been flipping between photo and video very deftly and has some incredible images to add to this gallery.  Here is the first installment of our ongoing coverage of the 2019 Tour Divide Race. Lael, Rue, Jay, and I all stayed out in Canmore to escape some of the hustle and tension of Banff before the race. Sarah, our most wonderful host, kept us full of snacks for two days as we were tracking down last minute supplies and going over maps and strategizing coverage.  Wednesday night we were invited to a BBQ at Leslie and Kieth’s in Banff; surrounded by some legends of the race we all gorged ourselves on endless quinoa salad and good ol’ barbecue.  The day before the race, Lael went for a hike with her parents who had road-tripped from Alaska to watch her take off at the grand depart.  Jay and I took our ridiculous loaner Specialized Kenevos out for a little spin on the local bike paths, these would be essential tools for us documenting the race.  On Thursday evening we all tucked in for one last good rest before the big start. We loaded up all the bikes and Sarah grabbed a box of Salsa’s Pie Town stem caps and we were off to the grand depart. I think the final grand total was around 150 riders taking off from the YMCA that day, it is truly staggering and awesome to see that many loaded bikes. Crazy Larry, the Grand Depart cat herder, was getting everyone hyped up to blast off.  Lots of hugs were being given and it felt like walking around a small reunion for this weird little bikepacking world of ours.  I saw a few familiar faces and a few new ones I was really excited to meet.   Crazy Larry began his final countdown, and off they went, with all they could ever need strapped every which way to their bikes, all the way to the Mexico border. We quickly packed up the car and drove to meet up with the race south of Spray Lakes.  Josh Kato took an early lead and was the first rider down the Smith Dorian trail.  Some fun new singletrack and a new suspension bridge added some amazing scenery to an already stunning section of trail.  Unfortunately, a pass closure dictated that we had to do an over 4-hour drive around to reconvene with the route near Elkford, where the trail turns to the mountains up Koko Claims, a newer addition to the route with an infamous 5-mile hike-a-bike.  The rough rock gardens great you almost immediately as you make your way up the trail.  Many people have packed extra sets of shoes specifically for this section.  Some grumble about walking, others just trudge on with smiles on their faces nonetheless. We catch up with the riders again around mile 150 before they descend into Fernie for most of the front pack’s first resupply. We find a large group in and around the McDonalds. Some start to look around for hotels for the evening. Lael and a few other riders chug as much food as possible and speed off into the night.  Most will reach close to 200 miles that day.  While some sleep only a few hours the newest leader Sofiane Sehili would continue throughout the night without stopping. We meet the front of the pack as they arrive at the border crossing into Montana.  Sofiane is the first to arrive after pedaling all night, he looks calm and collected nonetheless. Nipping at his heels is Josh Ibbet and Josh Halligan. Lael comes down the pass and into the border crossing, passing the cars to do an indoor check and skip the long car line.  Many riders get caught waiting in the car line that day, losing precious time. Two passes later, our team sets up waiting at Red Meadow just south of Glacier National Park.  A rowdy bunch of locals camping and fishing keep things interesting while we wait.  Sofiane is the first to pass with a commanding lead.  Josh Kato surprised us by making up a few positions after a long delay at the border.  Lael has fallen back a few places but continues to power on.  We find an amazing field of Beargrass blooming in a former clear cut as we make our way toward Whitefish for the evening.  We catch Lael riding out of town as the sun sets; we head to a hotel to sleep while she keeps pushing on through the night, making it close to mile 400. 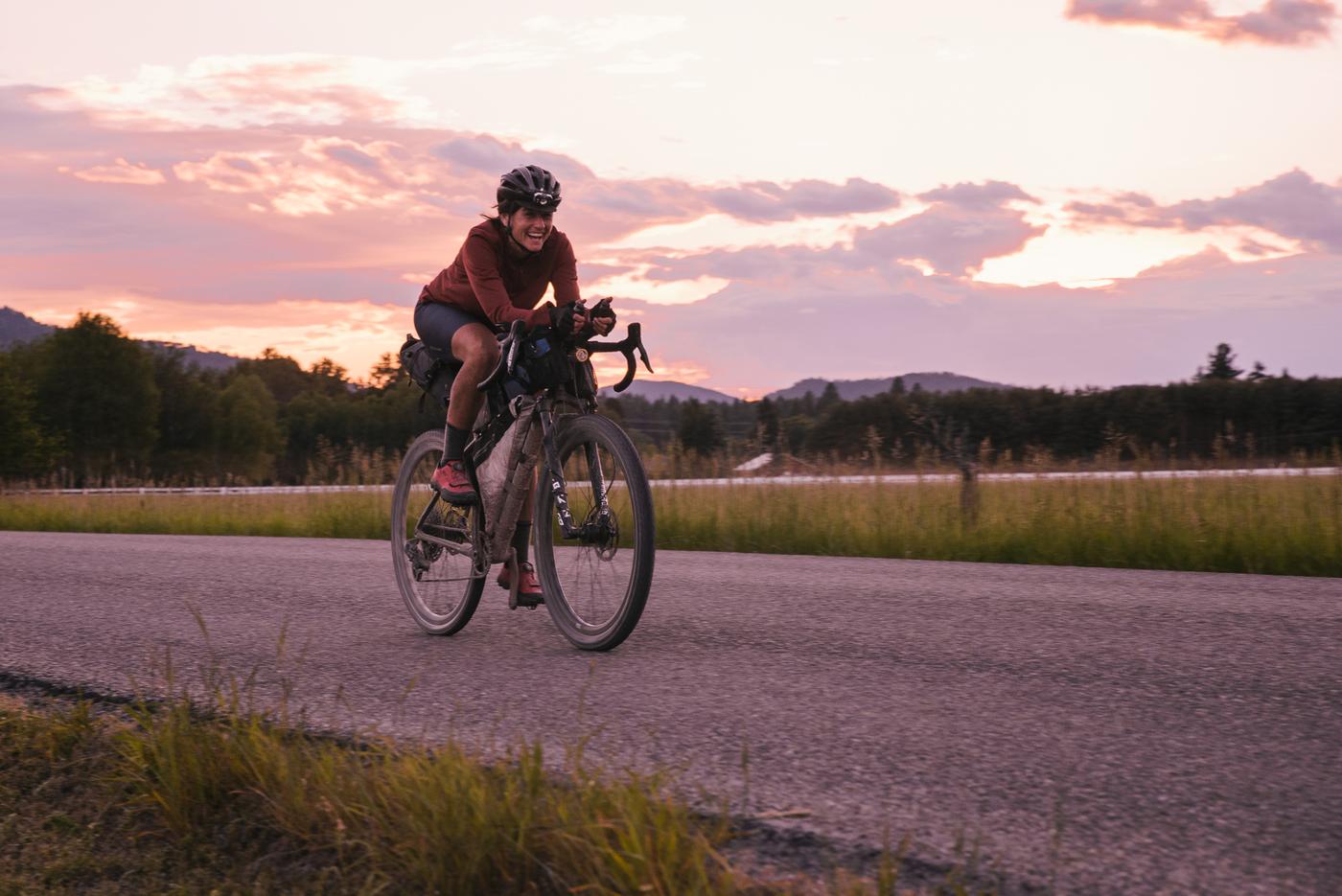 We wake up and check track leaders to find that Sofiane has still yet to sleep at all in two days and has a commanding lead, we won’t even see him all day, same for Josh Kato, though he actually got some sleep.  We intersect the route in a few places as the route sweeps across the Swan Valley.  We cross paths with Nate Ginzton, Josh Ibbet, Steve Halligan, and Lael Wilcox making up third through sixth place for the day. We get an amazing chance to use our E-bikes to follow the riders up and over Swan Divide, one of the few singletrack sections of the Divide. Near the top, we are dazzled with a view of the snowcapped Mission Mountains to the west.  After a long zig-zagging slog to the top, the riders are treated to a massive ripping downhill toward Seeley Lake.

We spend the evening watching riders trickle into Ovando to resupply.  Ovando is a small town of only 70 people, but holy wow do they roll out the red carpet for tour divide riders.  Kathy from the Blackfoot Angler comes to take a photo of each rider and even has a webcam on the front of her store for those that arrive after hours.  The town has multiple places for the wayward Tour Divider to crash between the wagon, teepee, or old town jail.  The Blackfoot Angler now carries an assortment of bike goods for the riders.  Kathy, who runs the shop, has tales for days of all the people she has met and kept in contact with over the years. The town has opened its arms year after year for the racers and riders alike and has become world famous for its hospitality. Lael arrives for resupply as she yardsales her gear to dry out for a minute. She stuffs two hotdogs with topping into her mag tank, chugs two chocolate milks and she is off. We hang around to watch Evan and Kai resupply before the shopkeepers close up for the evening.  I meet a woman who rode the Tour Divide last year and she was visiting a cousin who just moved to Ovando. She was hoping to catch Lael but just missed her by a few minutes. We continue on toward Ovando to find Steve Halligan mulling about at a gas station, he is cold and seriously considering whether or not to continue to ride on through the night.  Sofiane has made it to Helena at mile 650 and is finally sleeping.  We get to our hotel and begin editing for the evening and don’t even notice that Lael has pushed on past us. She is still riding as I am writing this at 2 am.  Josh Kato and Sofiane are sleeping….