The Gods and the Goats: A Free Form Journey Into Crete “Where you are from?” He asks us with an easy smile.

“New York City,” we always say we’re from here because no one in rural Europe can point out Clinton, CT on a map. Actually, no one from rural anywhere knows where Clinton, CT is and NYC is close enough.

“You ride your bicycle here. Good. Here, sit sit, roll this [dried plant], we’ll have a smoke.”
So we have a sit, Ronnie rolls the dried plant and we chat for a bit about his life, his connection to this part of Greece, the places he has visited in the US, and then we say goodbye. A beautiful glimpse of what was to come on this journey. That night we camped in a small cave that seamlessly integrated a small church and large grape trellis. We are getting into our sleeping bags when a truck pulls up and parks beside the gate we opened to get to this cave/church/grape area, thinking we were about to get kicked out of this primo camp spot. Our fears do not come true. The man had come all the way down the mountain from where we had just descended to tell us to make sure we are securely and tightly closing gates behind us. He tells us his goats are very good at getting past loosely tied gates. If cash rules everything around Wu-Tang, then goats rules everything around the inhabitants of Crete. He thanks us and wishes us goodnight. 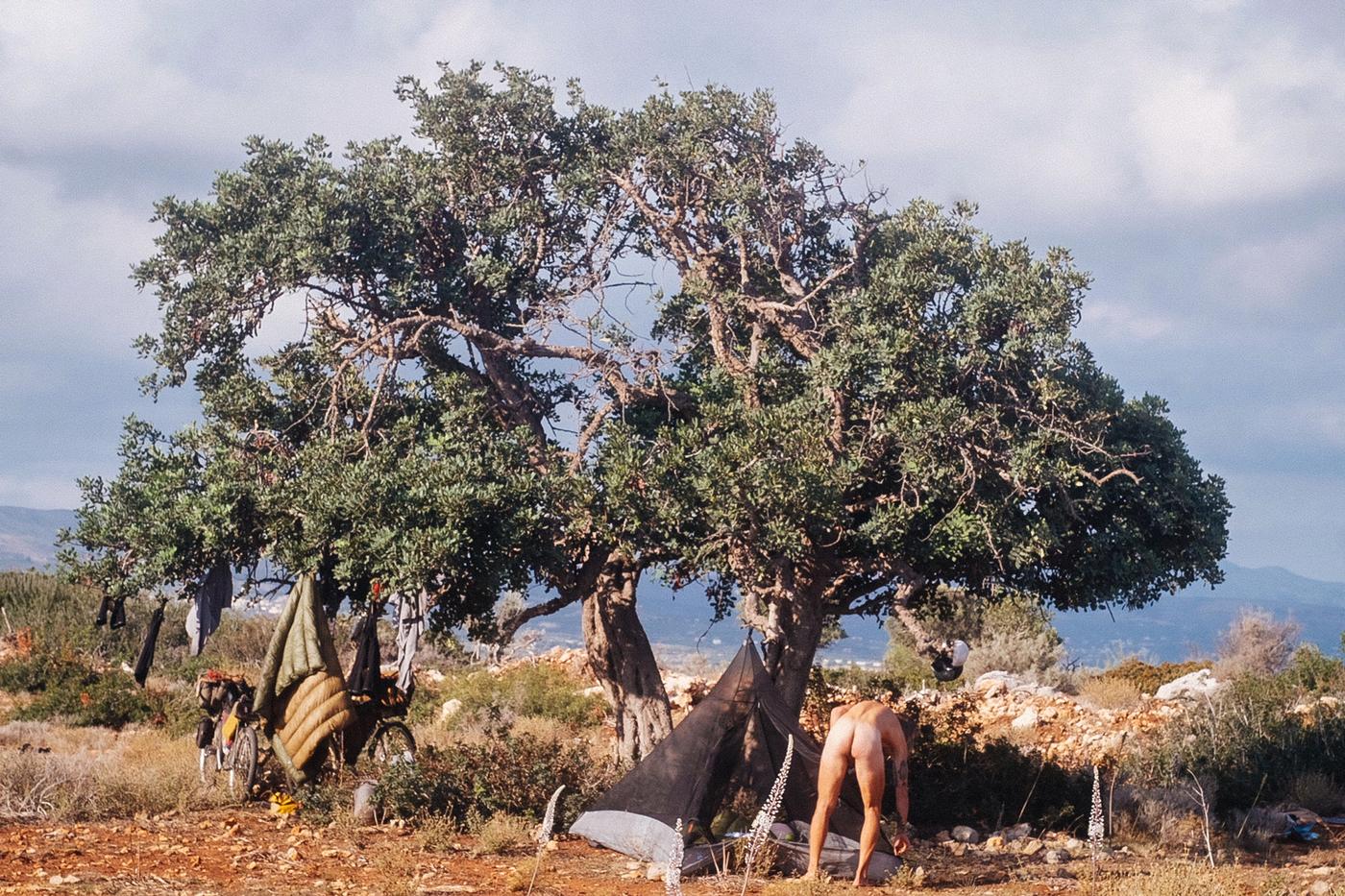 Private property and trespassing have been the most nerve-racking and dangerous parts of bike touring but here- not an issue. Maybe this laissez-faire attitude folks ‘round here have on the concept of property comes from the anarchists who claim that “property is theft” or maybe it’s the long-term effect of living in a country that invented the idea of democracy and social unity. No matter the cause, learning this on the first night of camping was extremely helpful in our fly-by-the-seat-of-our-shorts “plan” we had for our trip. The entire island opened up to us as camping potential was unlimited. We camped undisturbed in the wind-blocking safety of a beach cave in Sougia during a Medi-cane (a Mediterranean hurricane). Along a rocky cliff overlooking the reflection of the full moon on the ocean on the outskirts of the tiny tourist town of Loutro. Directly off an E4 hiking trail (definitely not a bike trail) that lead to the beautiful Sweetwater Beach when we ran out of daylight. Under a 2000-year-old plane tree at a necropolis within Ancient Lappa. We even had a run in with the police and an olive orchard manager who came to our campsite in hunt of a campfire we had started. We had already put out the fire properly and looked downright angelic so the interaction again was calm enough and the property authorities walked away bidding us goodnight and good luck. Most days, we were biking past olive trees standing twisted but upright and at the ready in militarized neat rows waiting for Athena’s leading command. One-third of Crete is covered in Olive trees as a major cash crop and cultural icon. Athena, who emerged out of her father’s head, sword and shield in hand, ready for combat, won over the populace of Athens with the gift of the Olive tree. The people, in return, named the capital after their beloved heroine. Crete is the birthplace Zeus, Athena’s father, and the site of the magnificent palaces left behind by the Minoan civilization which predates Zeus himself. 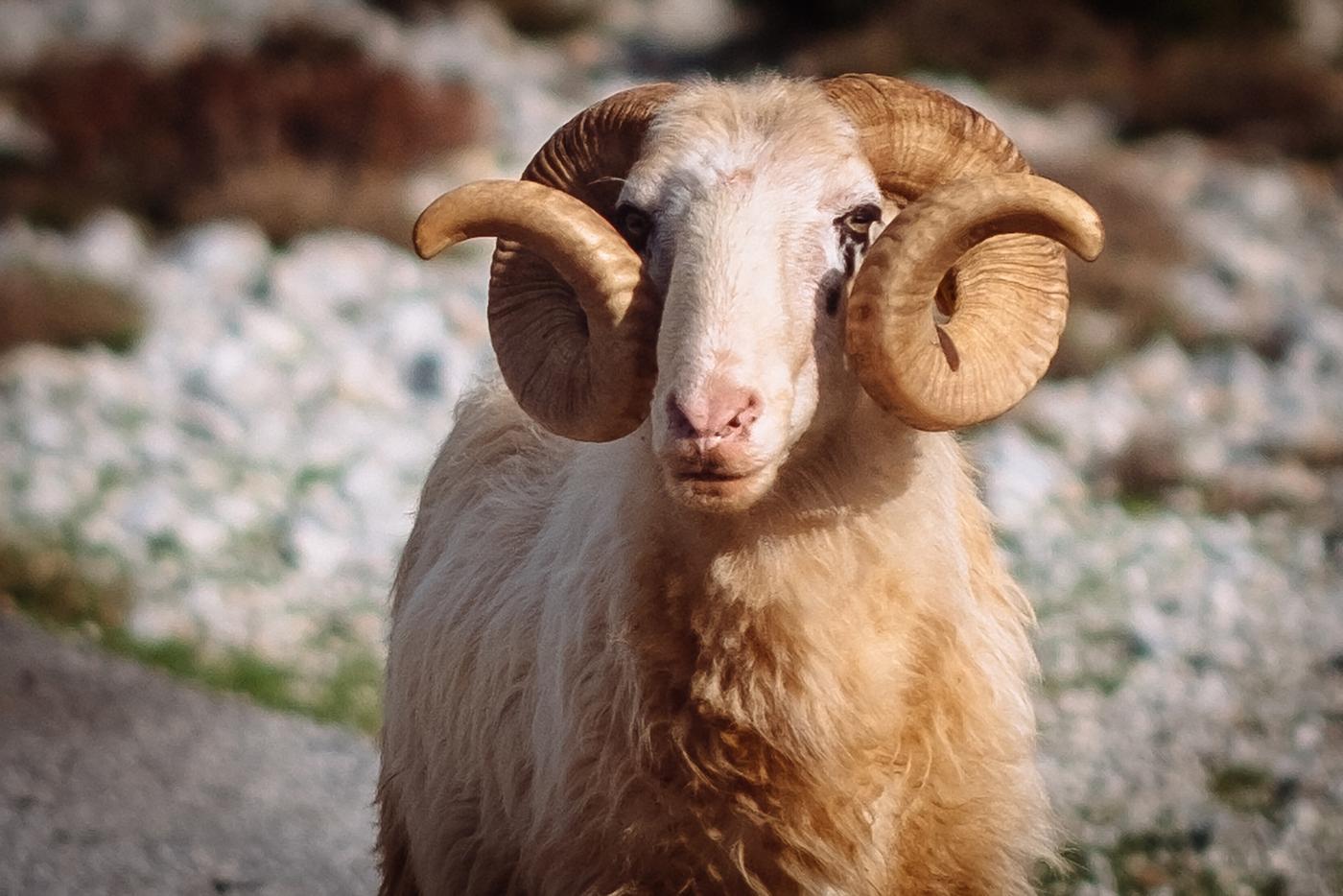 Before Homer’s epic poems were heard, before there were pyramids in Egypt, before the formative age of the great cities of Mesoamerica, but around the time when teosinte was being domesticated into maize in central Mexico, the Minoans were building multi-story palaces decorated with distinct and elaborate art and complex plumbing systems. The hallmark of which was the city of Knossos dated at about 4000 years ago which was home to thousands. Much like the great civilizations of Mesoamerica, archaeologists are still scratching their heads at how these great cities fell. 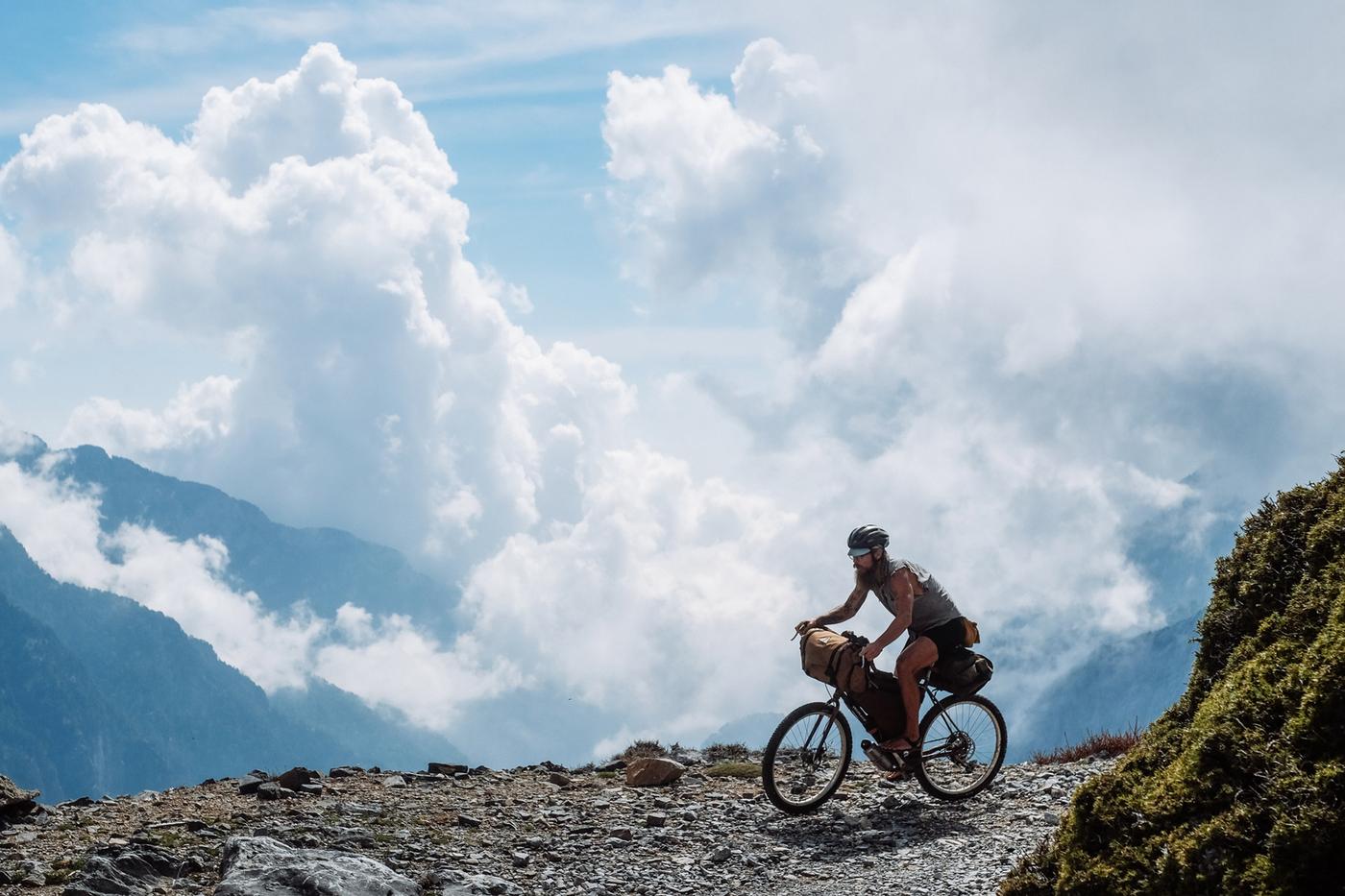 It’s easy to get mixed in between myth and reality here. Time becomes non-linear, orbing in and out of dimensions only traveled by the hundreds of cats and kittens we saw on the island. Cats are one of the few animals that can travel across dimensions and through multiple lives- that’s why they’re so grumpy sometimes. If you’re a cat lover like me, you’ll understand why it took Ol’ Ronnie and me two weeks to ride approximately 400 miles- must look lovingly at all the cats but still give them their space. Like the Lotus-Eaters, we find ourselves completely bewitched and spellbound by the geology, myth, and food culture of the island. We could ride into the mountains from the beaches on groads, single track, pavement in the morning and be safely tucked into clouds by nightfall traveling at a human pace- that is, stopping multiple times to eat, trying to pet cats, and greeting people we pass with a “yassas” -the polite way to say hello, people said “yaaa” when they wanted to be less formal. This is also the kind of behavior that can get you swindled into paying 25 euros for grapes (which you can pick for free literally everywhere) and raki (that you get for free at the end of every meal). Raki is a moonshine-like spirit made from distilled grape dregs and the national drink of Crete. An elderly woman dressed in all black stopped us and led us into her pop-up shop where she was selling grapes, oregano, olive oil, and of course, raki. She didn’t speak a lick of English but took me by my hand and lead both me and Ronnie into her small brick and mortar store where she poured us shot after shot of raki and then strong-armed us into buying heaps of things that had no business being on our bikes. I’m talking about the grapes and raki and about a pound of oregano she had harvested herself. The abundant edible flora of persimmons, apples, oregano, grapes, olives, and much more is no accident. The place is a heaven for foodies because much of the food is foraged or grown locally and organically. Our favorite dish of “boiled wild herbs” was chicory when we were there in early fall but changes depending on the season. Even as vegetarians, there was no shortage of things to eat. Ronnie ate at least 4 cups of sheep’s milk yogurt with thyme honey every day, always with the shit-eating grin of an extremely satisfied person. There were also palm-sized pies filled with spinach and goat cheese, the sweet Skafian pies drenched in honey, and always available to us was boureki, a delicious ratatouille with seasonal squash, potatoes, and goat cheese.

Chestnut harvesting had just begun as we were leaving the island. My increasing nervousness about the spiny husks puncturing my tires recedes in seeing so many people taking time to harvest them. The first sighting was a burly truck driver who had pulled over and walking around looking here and there at the ground. At first, I thought he might have had a mechanical but I was so delighted to see that he had a shirt-bucket full of chestnuts. As we neared the end of our travels, we saw more and more harvesters. One man had a truckload and insisted we take some on our bikes. Another was taking a slow walk toward us wearing the cutest sweater. We stop at his waving to give us more chestnuts to carry. We could tell he was a gentle fella with kind eyes and clearly wanted some company for his walking harvest. He didn’t speak much English and we are a terror at Greek so we did our best to be good company.
“Where you come from?” he asks gently.
“New York City” an easy white lie we had become so accustomed to that we actually believed it.
“Ohhhh…” he shakes his head, “Ohhh Trump!” he sorrowfully shakes his head again and empathically pointing at his temples says, “ He is not here.”
We agree. We tell him we are very different from that man. He believes us and watches us roll our properly inflated tires away, smiling.