What better way to enjoy the view... 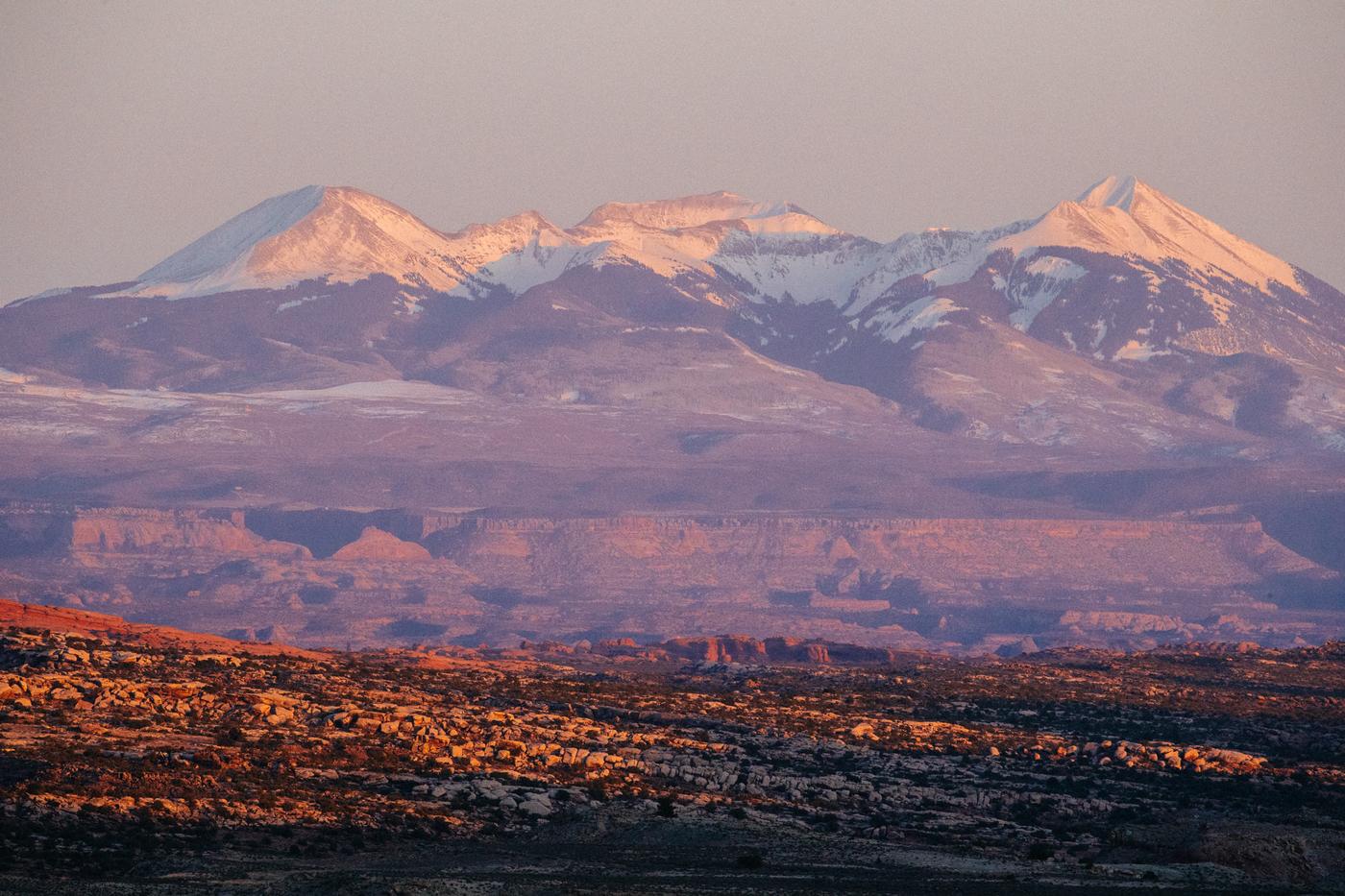 This unique quadrangle encompasses and extends well beyond Arches National Park. Comprised mostly of colorful bedrock strata ranging in age from Pennsylvania Paradox Formation to Cretaceous Mancos Shale, characteristic of Southern Utah. Juxtaposed with what is called the Salt Valley Salt wall. These salt diapirs are common throughout the area, and the Salt-Cache Valley Salt Structure is the most prominent structure, protruding upward from the red bedrock, creating a stark white juxtaposition from the typical red dirt this region is known for. Within this, you will find joints, fins, grabens above salt wells, and the highest concentration of arches in the world. Towards the eastern region, Jasper litters the landscape, cascading gold and green hues amidst the cryptobiotic soil, while in the western zones, blood agate becomes the substrate amidst manganese hillsides and the trail itself becomes a sea of this beautiful mineral comprised of silicon dioxide in the form of microscopic fibrous quartz crystals. 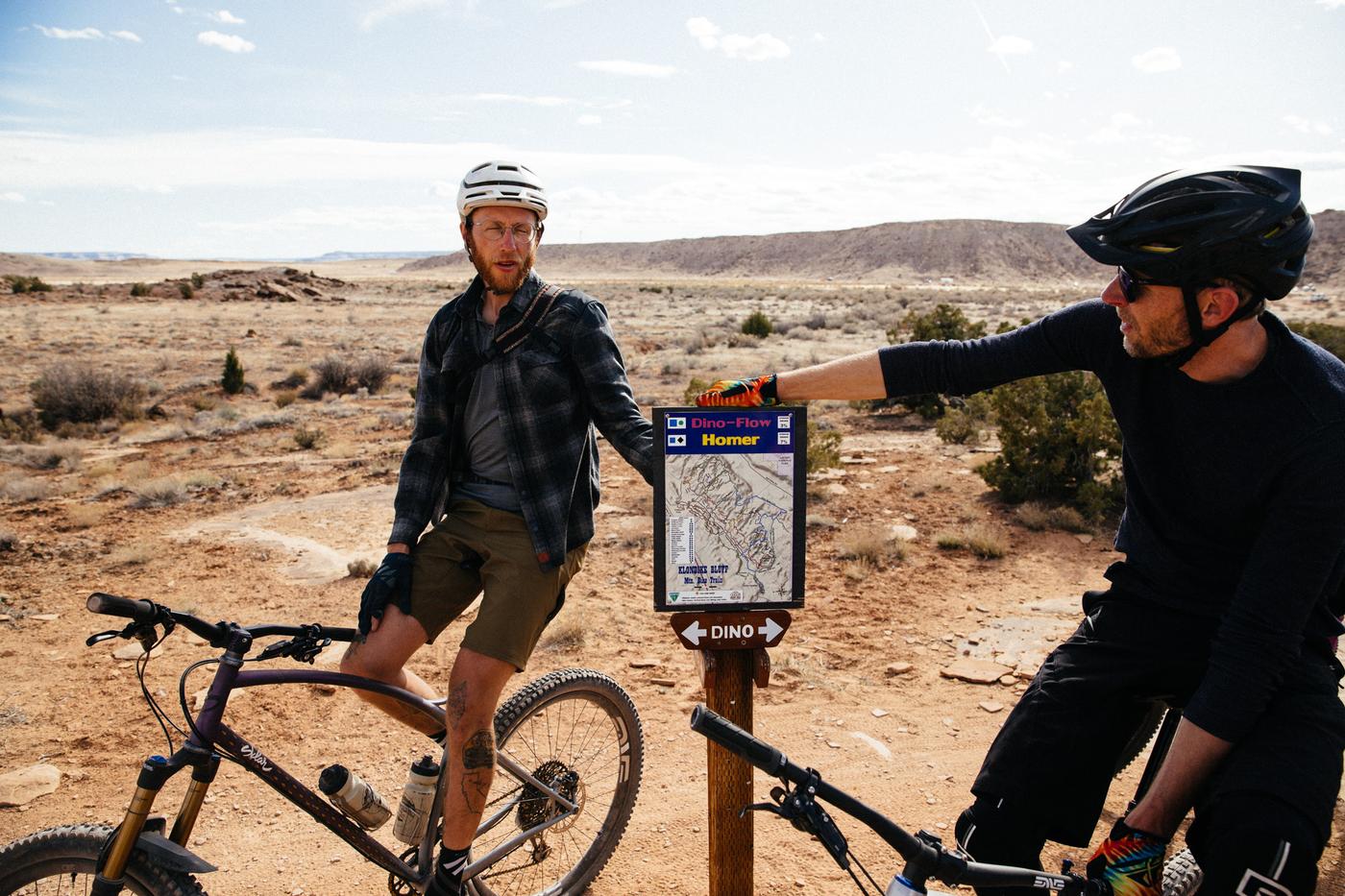 With names like “Dino Flow,” “Copper Ridge,” and “Agate,” the trails of Klondike Bluff taps into the geologic and paleontological history of this zone. Remember those dinosaur footprints from our Green River story? Well, some of them are here. You actually ride alongside them for a little bit. There’s also a 4×4 trail up to an old copper mine where tailings still litter the landscape, along with other refuse such as PVC pipes and giant holding bays filled with crushed cans. It’s wild. 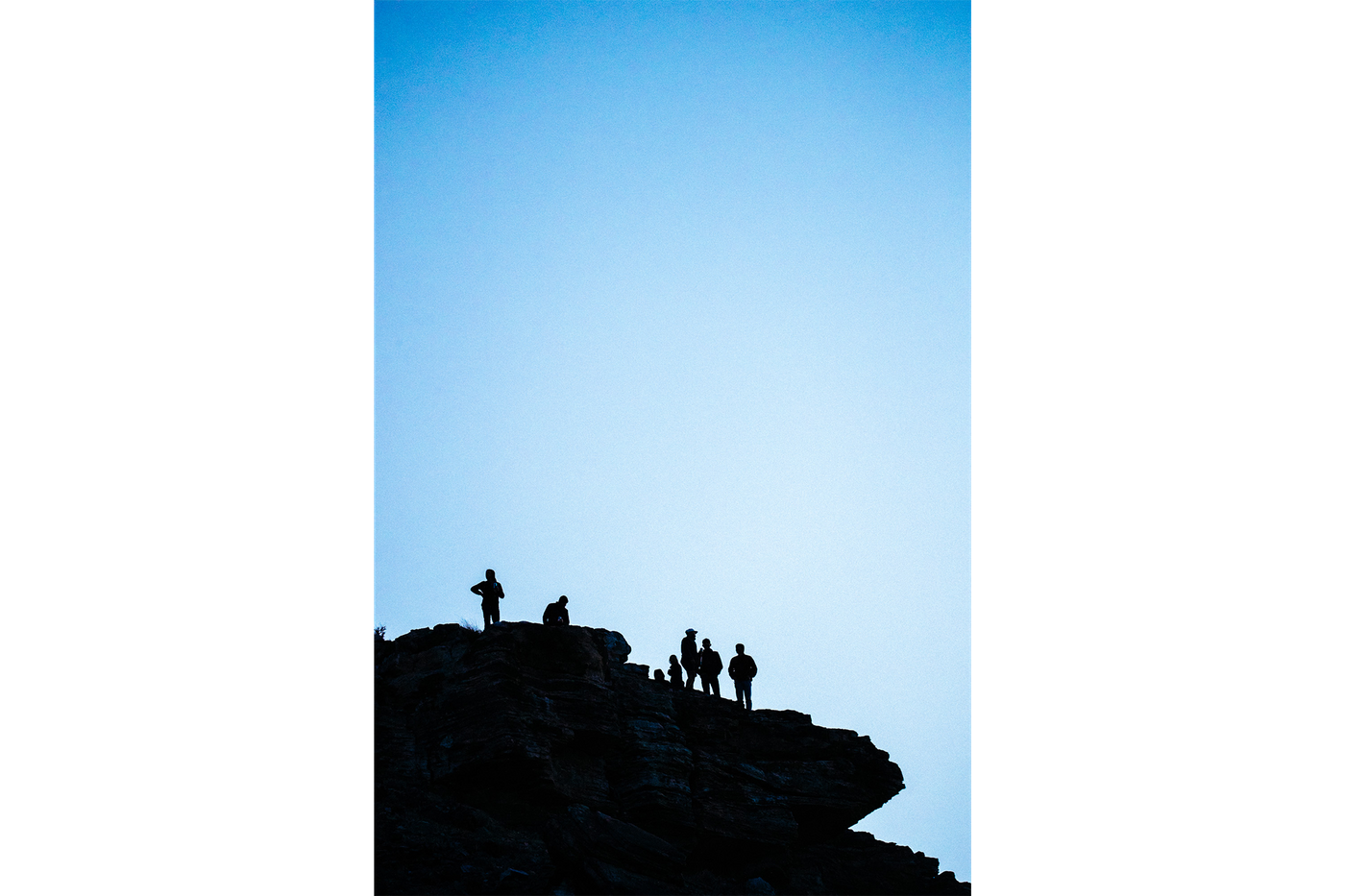 After departing Fruita with a week’s worth of groceries and a few cases of LaCroix, our caravan of interstate riffraff made its way from Colorful Colorado to even more colorful Utah. The last time I was at Klondike, every single campsite was full. It was spring break afterall. So, while I had formed a plan for a Moab alternate, even it ran the risk of being blown up. I tried to get a head start on the group, so I could scout out the many turnouts and enclaves to find the most secluded spot for our rather hefty vehicle group.

Luckily, at the end of a dirt road, there was a giant outcropping, butted up against the hills and mostly protected from the wind. Plus, there was plenty of room for our cars and trucks. I rallied the troops and we circled the wagons. As we set up camp, the sun was turning in for the day, so rather than waste the time splitting firewood, we all scrambled atop the rocky outcropping to watch the sun paint the landscape and to Dangle. Ravens left the bluffs and we returned to camp, sated for now. The campfire was warm, acting as a sedative for me and shortly after, I was in bed. 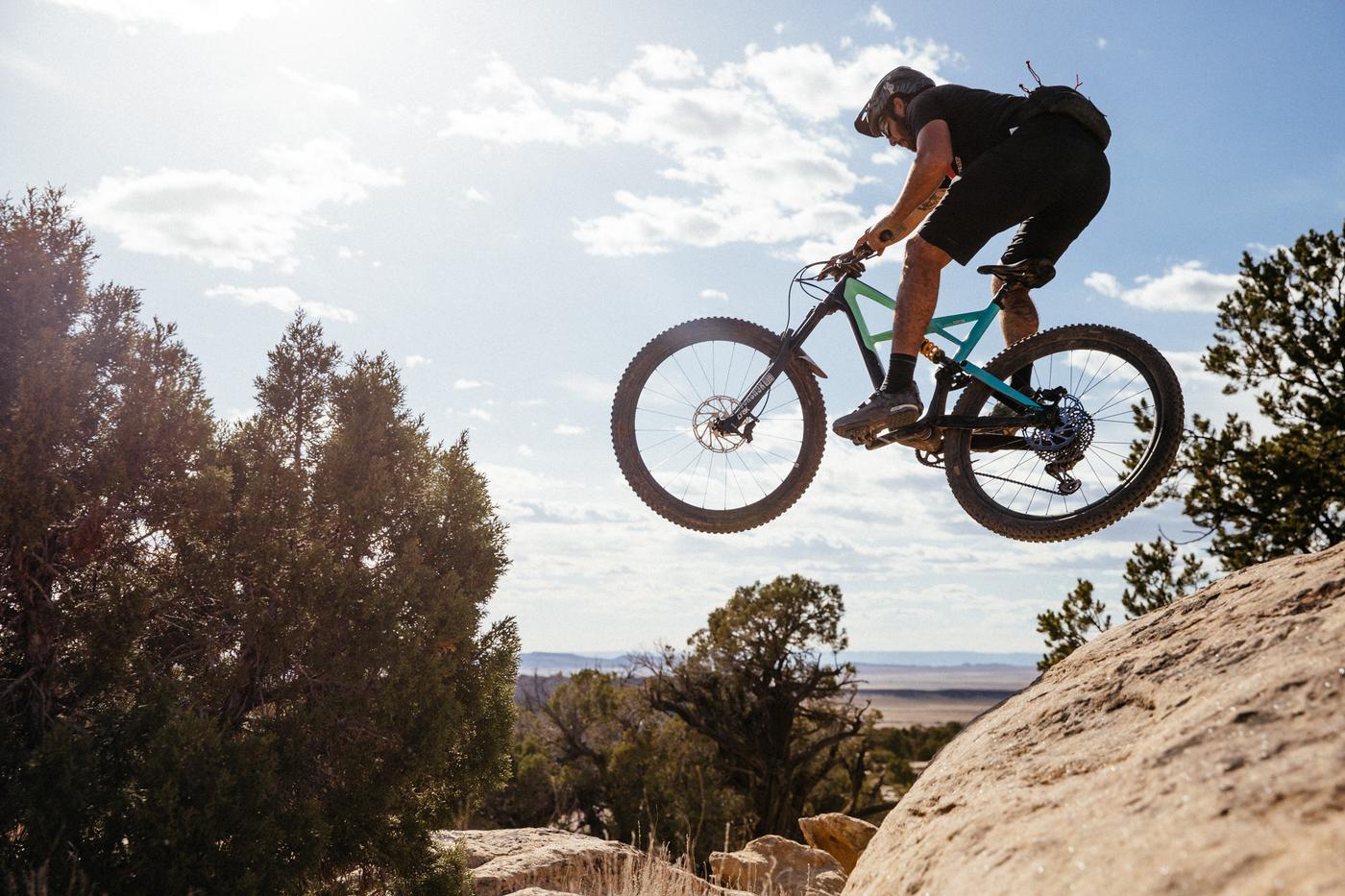 The trails here range from ultra beginner to semi-advanced. Like the slickrock in Moab, it’s not really singletrack, rather a dotted line you follow, as the trail careens through juniper trees, and over hardpack red dirt. All the rocky trails at the top, overlooking Salt Valley are where the black diamonds are. Granted, I wouldn’t consider these real black diamonds, but considering families ride here, it’s a good way to say “don’t take Timmy on his first bike down EKG.” Meanwhile, I found beauty and solitude on the beginner trails like Agate, where perhaps the lack of technical features kept my teeth inside my skull where they belong. You see, the trail gets its name from the beautiful sea of Blood Agate it careens through and over. The entire time I was riding it, my eyes kept darting to the ground, literally forcing me over the bars in one instance… Can’t say I minded the new vantage point though! 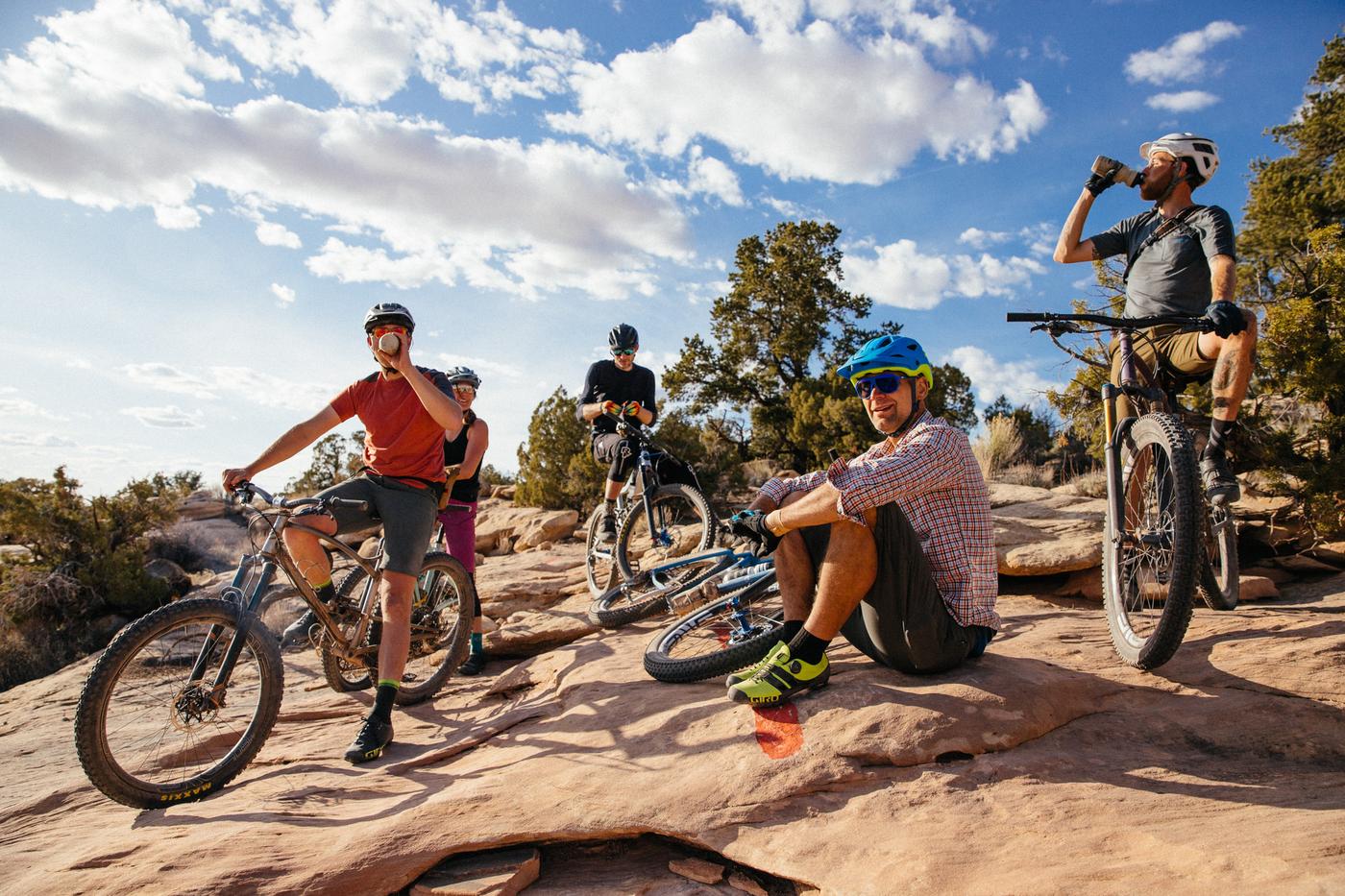 We spent the next few days exploring the trails of Klondike Bluffs and making short jaunts into Moab during the week. We found it was best to ride in Moab from 10 am to 2 pm. Before or after that and the caravans of Jeeps would be too dense. More on that later. With apps like Trailforks and MTB Project, you can explore this entire region, planning out a full day’s worth of trail riding. If you get tired, take to the hills for some rock hounding, explore the dinosaur tracks and head up to the Copper Mine, either by 4×4 or by foot. The views at the top are spectacular. It is Utah, afterall…