Bjørn pauses atop a wind drift in the middle of Norton Sound.

The Origins of Arctic Exploration
Photos and words by Bjørn Olson

March 1998 – Behind me, a strong and gusty north wind stung my legs. On a rock-hard snow trail, I bombed over the frozen sea ice of Norton Sound, effortlessly. My modified mountain bike with Snow Cat rims and two and a half inch wide tires was shifted into the highest gear. With each gust, the fine crystalline snow swirled around the trail in hypnotic patterns, blowing past me and over the polished glass surface of the exposed sea ice. In front of me and to the right sat a lonely and distant mountain cape. To my left was the shallow arc beach of the Norton Bay coastline, several miles away. Stories of snow-machiners riding into unseen open leads of water never to be seen again circulated through my mind. The uneasy fear of being offshore and alone in an alien sub-Arctic environment, with very real threats to life pushed down further as joy bubbled up.

I hit a small pressure ridge of ice, felt my front tire leave the surface and bunny hopped my loaded bike into the air. An uncontainable whoop erupted from my lungs and I hollered with abandon into the lonely winter vastness. Visibility was fantastic but the orange sun was low. ‘Would I make it across the ice and to the shelter cabin before dark,’ I wondered. At this fast pace, with the accompanying tailwind, it seemed certain. As the sun continued to drop and the pink and orange glow of the impending sunset settled in, a strange thing began to happen: the cape to my right began to morph and change shape in an incredible and surreal way. At first, the pointy tip of the summit distorted just a little but then it grew into a taller and more round shaped bubble. My mind struggled to make sense of what I was seeing. As I rode on, staring transfixed, the cape deformed further until finally a perfect mirror image of the conical peak swelled upward into the sky, doubling in size; bewildering my senses.

Over the roar of the wind and the flapping of my nylon hood, I could hear a high-pitched whine of a fast approaching snow-machine coming from behind. When it caught up, the driver stopped and removed his ice-encrusted facemask. “Everything okay,” he asked. “Yes, but what is that?” I yelled over the wind and his idling machine while pointing to the hourglass-shaped and impossible looking cape, bathed in rich sunset light. “Fata Morgana*,” he said. “It’s a mirage. It happens here a lot when there is a temperature inversion.” 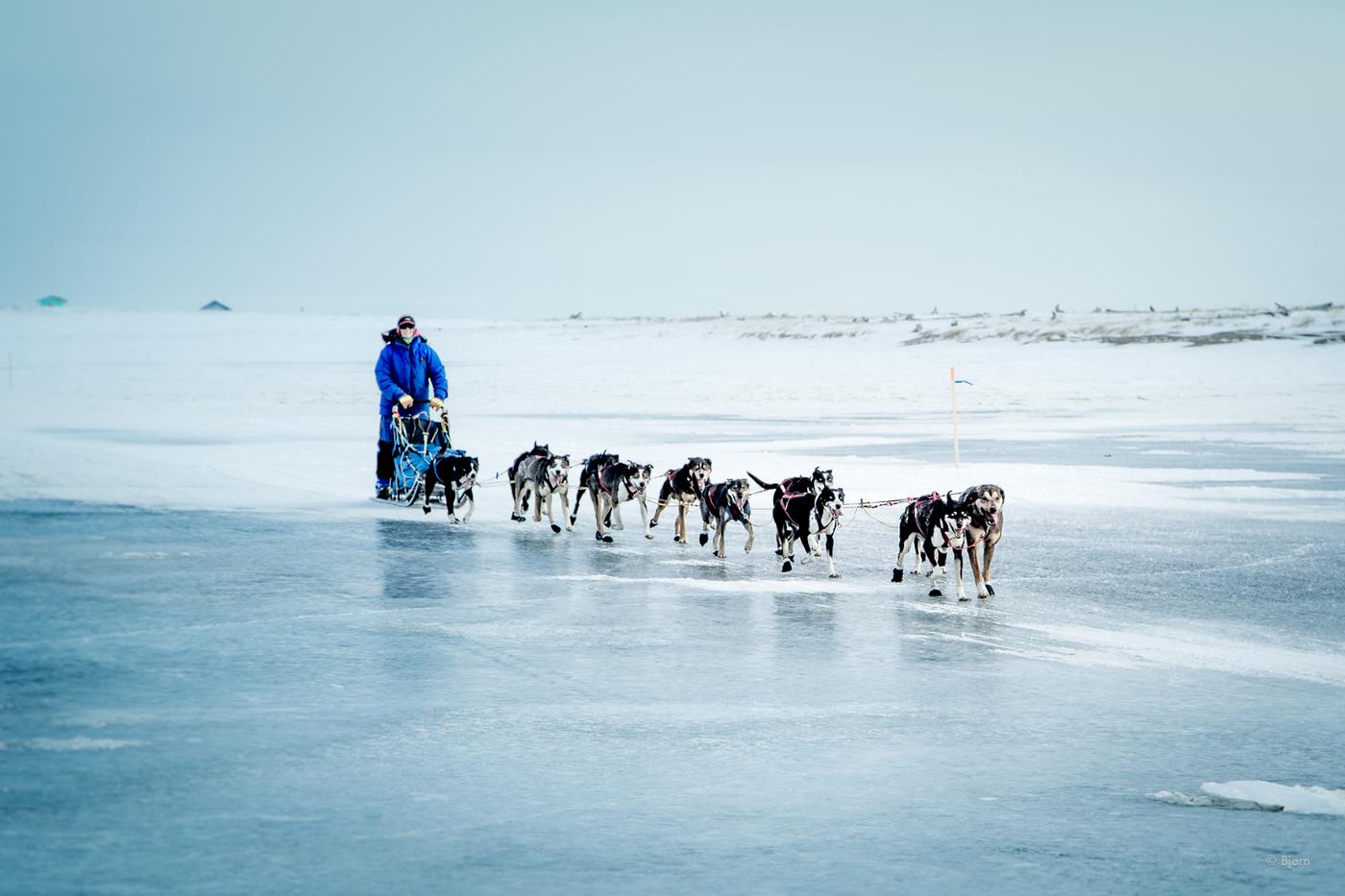 Standing still, the harsh wind on my backside and legs felt even colder. His definition of what I was observing left me wanting more information but we were both in a hurry to get off the sea ice and out of the wind before dark. He was on the way to the village of Shaktoolik. My goal was closer—a shelter cabin on the immediate shore. We both removed our mittens, as is custom along the Iditarod Trail, shook bare hands, wished each other well, and said good-bye.

An hour later, I sat in front of a rusted wood stove in the shelter and lit a fire. Through the frosty paned window, the last of the pink light fell to starlit darkness. As I waited for the space to warm and for my friends to catch up, I reflected on the past few days: we’d left Nome after watching the winning Iditarod dog teams come in under the burled arch, ridden our bikes down the trail, visited an out of the way hot springs that had been in use by Inupiaq Eskimos for thousands of years, and today I had ridden alone across the sea ice and witnessed the most mysterious and wondrous natural phenomena of my life. Despite stiff-cold fingers and wind-burnt cheeks, my sense of euphoria was cranked to eleven. My home state of Alaska—an ancient land of enchantment and mystery—had charmed me once again.

In that moment, I knew this method of human-powered exploration was for me. The freedom to explore wild and remote places that few ever experience is an innate passion that had, up to that point in my life, been achieved by kayak, skis, and mountain climbing. Exploration coupled with the sheer joy of riding a bike on technical terrains, like sea ice hummocks and frozen tundra, had sealed it. Few experiences in my life compared with the overwhelming sense of gratification I felt that night in the shelter cabin. More of this, I thought. Much more. In the days of my first winter cycling trip, adventure bikes were rigid mountain bikes with 26-inch wheels. Some shade-tree innovators made custom bikes with multiple rims and tires—laced to one hub—but for the average person, unequipped with welding skills and handy access to custom equipment, few options existed for adventure bikes well suited for wilderness conditions. Anyone who rode on snow trails at that time knew that wider wheels and tires were needed but they didn’t yet exist.

In Fairbanks, a bike shop sold wheels originally made of two rims welded together. This led to the winter subculture rim known as the Snow Cat – which is now considered a plus size wheel. At 44mm wide, it was the best commercial option available for winter and wilderness cycling. But, because of its double width, it fit few mountain bike frames of the time.

In the era of winter cycling with Snow Cats, a heel test could inform you if a snow trail was rideable. The test involved bringing your foot down with all your force, slamming your heel onto the trail. If it didn’t buckle or break you knew you could ride. New snow, breakable crust snow, wind drifted snow, spring snow and many other soft conditions were entirely unrideable. In those days, winter and off-trail cycling involved considerable bike pushing.

For several years, wilderness cycling took a bit of a back seat for me. Backcountry snowboarding, mountaineering, and expedition kayaking were the staples of my life. Far-flung backcountry expeditions by bicycle, however, never left my mind and in the mid-2000s the cycling industry began to catch on. The fat-bike—an unstoppable idea whose time had come—was born. An era of unique and creative wilderness exploration has opened up as a result of the fat-bike. Over the last dozen years, the discovery of what this new and evolving technology is capable of has been a consuming source of investigation, inspiration, and discovery. On every trip since my very first, nearly twenty years ago, I learn and experience something new. What four and five-inch wide tires on modern fat-bikes are capable of surmounting is still a source of near-daily revelation. I am continually seeking experiences like my first winter trip on the Iditarod Trail — moments of private and shared bliss within the natural world; traveling and exploring by human-power, with self-reliant alertness; poised to bunny hop a sea ice pressure ridge whenever the situation arises and hungering for mirages that trick the eye and excite the senses.

* A Fata Morgana— (Italian: [ˈfaːta morˈɡaːna]) is an unusual and complex form of superior mirage that is seen in a narrow band right above the horizon. A Fata Morgana can be seen on land or at sea, in Polar Regions or in deserts. It can involve almost any kind of distant object, including boats, islands and the coastline.

A Fata Morgana is often rapidly changing. The mirage comprises several inverted (upside down) and erect (right side up) images that are stacked on top of one another. Fata Morgana mirages also show alternating compressed and stretched zones.

The optical phenomenon occurs because rays of light are bent when they pass through air layers of different temperatures in a steep thermal inversion where an atmospheric duct has formed.

Note: This March, I will return to Nome to bicycle the same route and plan to continue on, traveling east across frozen Alaska.