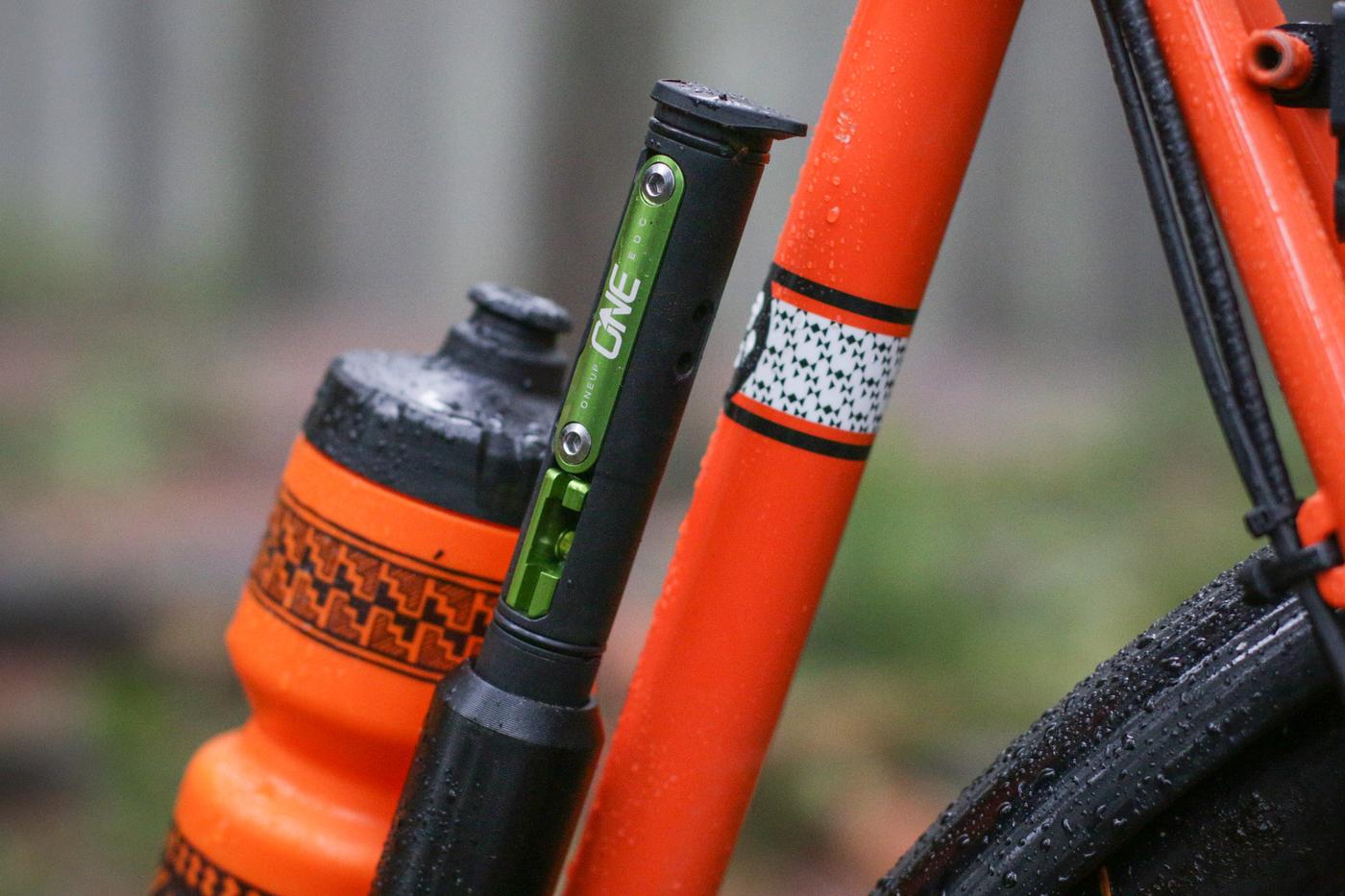 OneUp Components‘ EDC Tool System made waves when it launched due to its sleek installation inside mountain bike steerer tubes. Pull your star nut out, tap your fork steerer, install OneUp’s hollow top cap, and the tool system slides in from the top: always there, always ready. If you only ride one bike.

It’s a cool idea, but I switch between a number of bikes, most of which have steel forks, and the EDC system wasn’t going to work with any of those. And I always need a pump anyway. Well, it just so happens OneUp also makes a pump that the tool fits into. So we’re looking at both of those here.

Over the past few months I’ve been swapping the EDC Pump and Tool System between frame bags, my Ozette rando bag, and the plastic clip seen here. It’s really nice to be able to quickly move a full tool kit and pump between bikes, leaving just the spare tube that works for that particular bike on it. The OneUp EDC Pump comes in two sizes. The larger size boasts a 100cc pump stroke, is 10″ long, and holds the EDC Tool with storage capsule. The smaller size is 70cc and 7″, and just holds the tool portion of the EDC system – no stash hole. It’s made of nicely machined and black anodized aluminum, with an aesthetic not unlike a Thomson seat post. If you happen to be a CO2 person, the pump’s head threads out to double as a CO2 inflator. It’s a nice reminder that while CO2 is convenient, you should be carrying a pump at all times.

I opted for the 100cc pump, which is about the same height as a 26oz water bottle. OneUp has achieved high volume hand pump status by also increasing the diameter of the tube. The handle portion is about 33mm while the main pump tube is a hair under 29mm. The pump clips solidly into its bottle cage mount, though I find the extra girth requires mounting the pump about as low as it can go on the seat tube to clear my leg while pedaling. 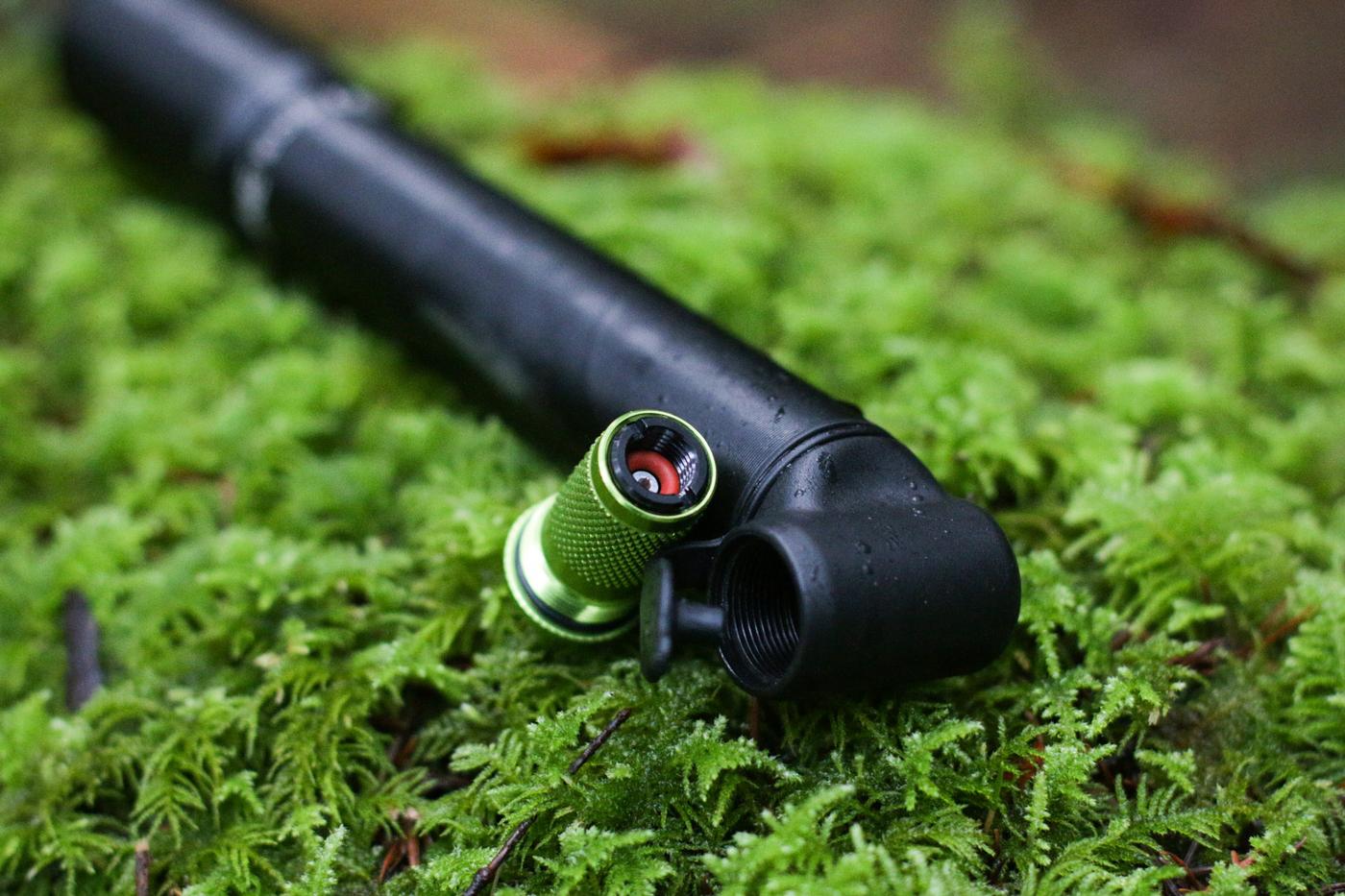 As luck would have it, Stephanie got a flat on our first outing with the OneUp system. The EDC pump’s solid feel carries through in use with smooth action, and and the high volume helps get bigger tires up to pressure quickly. I usually like pumps with extendable hoses, but the OneUp pump head is easy to use and holds the valve well.

OneUp’s products are mountain bike-focused, and that’s a limitation for those of us who ride a wider variety of bikes. The downside of the high volume aspect is the EDC pump tops out just over 40 psi for me. This isn’t an issue for me on any of my bikes right now – I can just get enough into my 42mm tires – but I like to be guide-level-prepared and 40 psi ain’t gonna cut it on a club ride. After a few months swapping between bikes, some of the anodizing has worn off the barrel of the pump. I’ll admit most of that happened on a single mountain bike ride where the pump was loose in my frame bag with a bunch of other stuff. If you’re precious about your stuff, you may want to keep this separated from other things.

The EDC Pump goes for $59, and if you’re into the EDC Tool System, it’s a nicely integrated unit that’s easy to swap between bikes. If I was just looking for a pump, and I was going to carry one this big, I’d lean toward one that can hit higher pressures and that has an extendable hose. 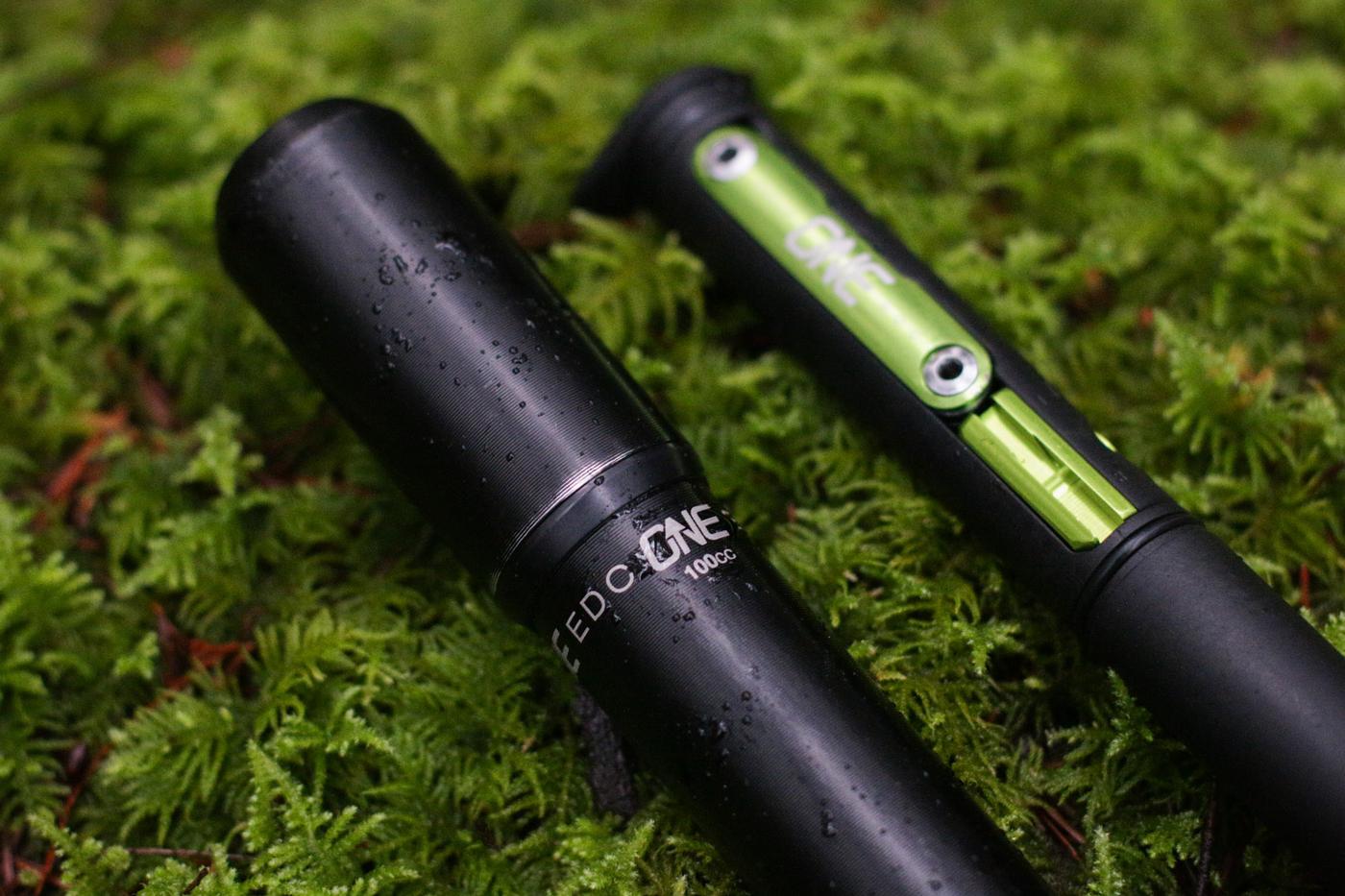 The OneUp EDC Tool System is the part that can slide into the steerer tube of your mountain bike fork. It’s got the usual suspects for multi tools, a chain breaker and a tire lever, as well as a few unexpected pieces. Head over to the OneUp site to read all about that, and check out their videos while you’re at it.

When combined with the EDC Pump, the EDC Tool System makes for a super simple grab and go solution that can transfer between bikes easily. Over the past few months of having the combination at hand, this convenience has more often than not won over my desire to have my favorite multi-tool with me on every ride. 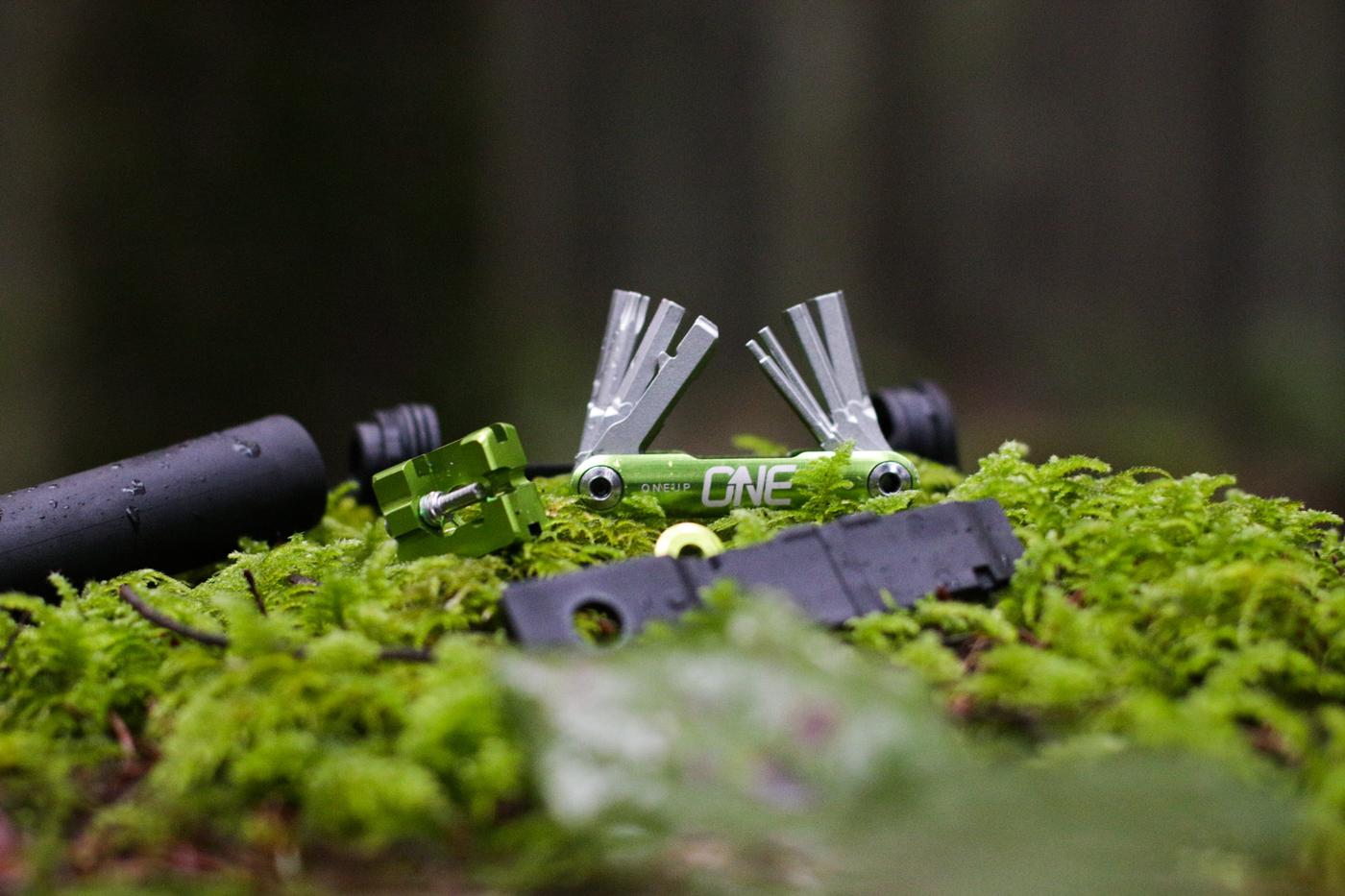 The EDC multi-tool is very much acceptable for the types of needs you run into out on the trail. The steel is of decent quality but the tool’s small size and sharp edges make it a bit less joyful in use. They sure have packed a lot into a tiny package, though. And for that I am impressed. For its size and convenience, the quality could be worse and people would still buy it.

One function that I haven’t even though of having on the trail until recently is a master link plier. I usually bring master links for 10 and 11-speed chains, but count on using them to put a chain back together after removing links. Russ at Path Less Pedaled also has the OneUp tool and mentioned he couldn’t get the master link tool to work. And you know what, neither could I. No matter how many times I watched the video. If you can do it, let us know what the trick is!

Another feature of the EDC system is the screw-on storage capsule, in which you can stash a variety of things. I like to put a tire boot and vulcanizing patch kit in there. The other option is to screw a CO2 cartridge in place of the storage capsule. Just remember that if you’re carrying the EDC Tool System without the pump, you’ll need a separate CO2 inflator.

The EDC Tool System goes for $59 but add another $60 for the top cap and tap to install it in your fork. It’s kind of a $120 investment either way, where you can either put the tool in your steerer or inside the pump. 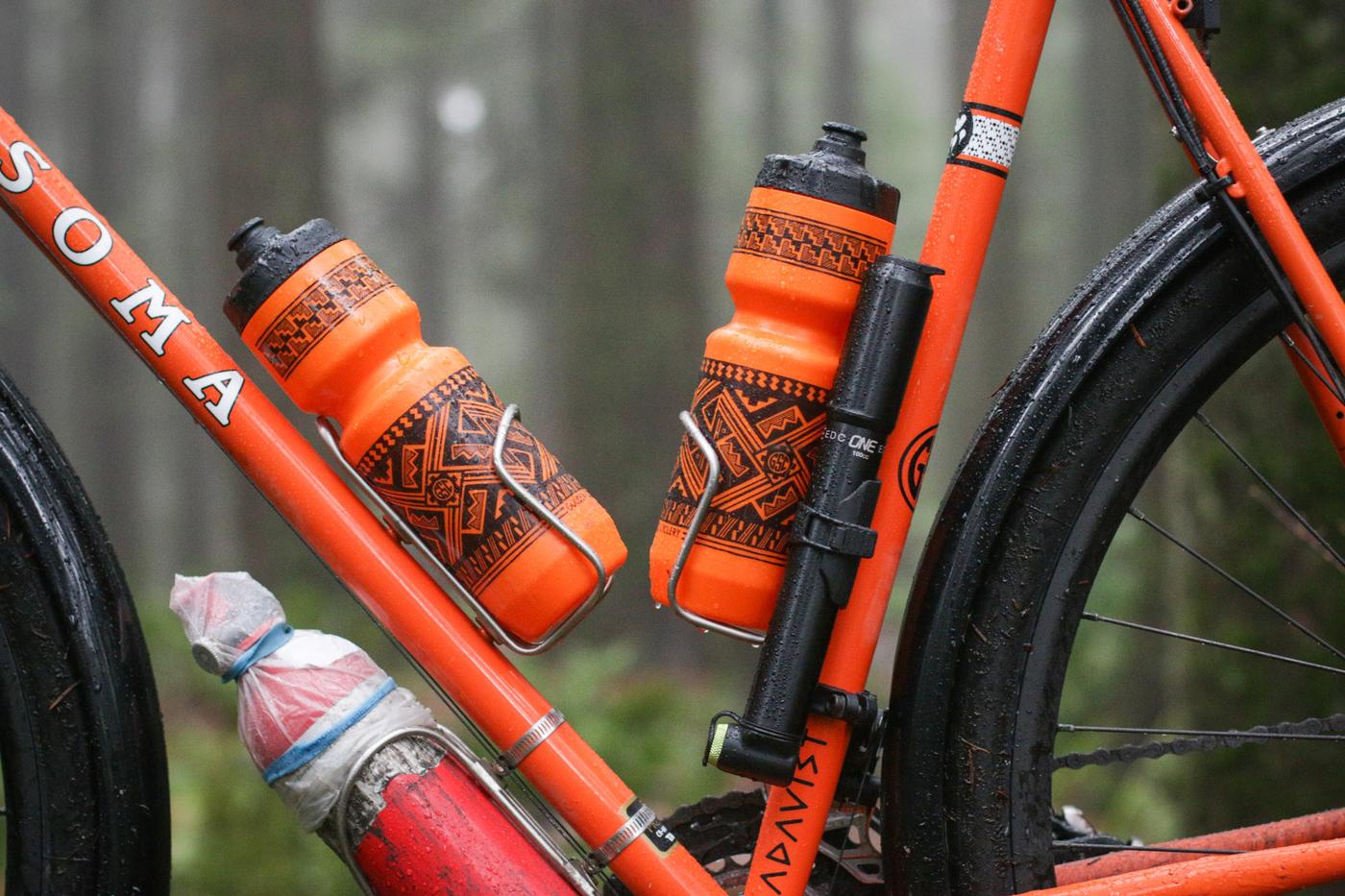 The EDC Tool System and Pump are a nicely integrated unit that’s easy to swap between bikes and never worry that you forgot to transfer some part of your kit. The pump’s high volume means it maxes out at fat tire road pressures, but it’s a nice piece if that suits your need. The tool kit covers a huge range of needs and is of good quality when you need to use it. All in all, the OneUp EDC system is a pleasure to use, and that’s often what’ll get me to bring something along when I’ve got plenty of other options.