After an afternoon of looking at cool vintage bikes at Cameron Falconer‘s house, I asked him if he’d be down to weld me a single speed mountain bike frame inspired by old klunkers, with a fork inspired by a Pro-Cruiser (first production mountain bike) with a loop tail. I basically wanted all of my favorite things about a lot of historic mountain bikes, all on one frame, built for me. BUT, I also wanted to showcase as many PAUL Component parts as possible, and I wanted it to feature the new Set-N-Forget thru-axle skewers. I also wanted to ride the shit out of this bike, so I wanted it to have legit shredworthy geometry and no weaknesses or tolerance issues.

Cameron is known as a framebuilder who makes frames that RIDE really really good. The man obsesses about the differences a degree or a millimeter can make in the way a bike rides, and cumulatively his frames are intuitive and natural to ride, with no bullshit cable routing or parts rubbing. They are “riders”, not “show bikes”, so visually the frames can be a bit boring to look at if you like eye candy. But for the hard riders who put more value on practicality and the no-frills execution of durability; the simple, purposeful, and subtle innovation looks even better after the patina of 5 years of abuse with zero problems.

What I’m saying here, is that I asked a dude who doesn’t give a shit about what a bike looks like, only what it rides like, to make me a bike that looks cool. Somehow I talked him into it. 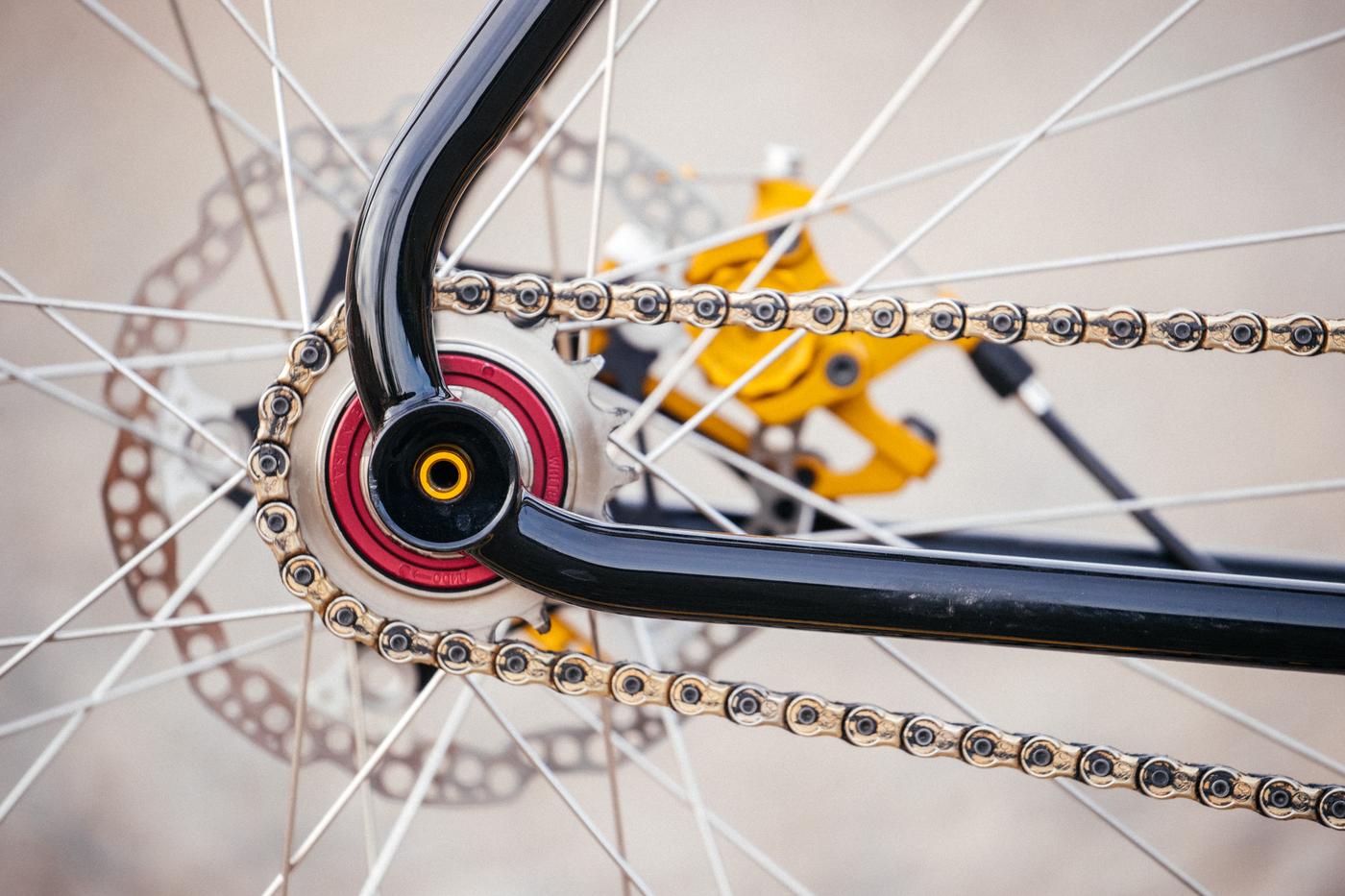 He took his time, fabricating the dropouts from scratch, custom bending the looptail and fork legs, running a tube through the downtube for easy internal rear brake cable routing without the fishing or rattling, and of course obsessing over the geometry and fit for my lanky weird body. When he was done with the bare metal, the frame looked like a rusty old cruiser from a distance, until you moved in and saw the disc tabs and threaded dropouts.

After all those years that I worked at shops building custom bikes up for customers under the constraints of time, it was really nice to just ponder every aspect of this project, take my time, and make it special. I asked RJ Rabe for the logos and artwork files he used for the sick T-shirt he designed for Falconer, and had masks made for the logos and headtube badge. Then I began the process of trying to sweet-talk legendary local Russ Pickett into coming out of retirement to paint my frame. He did all the sweet crazy airbrush jobs on all those old Mountain Goats back in the day, and I wanted this bike to hold a lot of Chico vibes, so after a lot of local name-dropping, praise, and just straight-up begging, he agreed. I told him my rough idea of some lightning bolts, but that it would be best if he just did what he wanted with it. 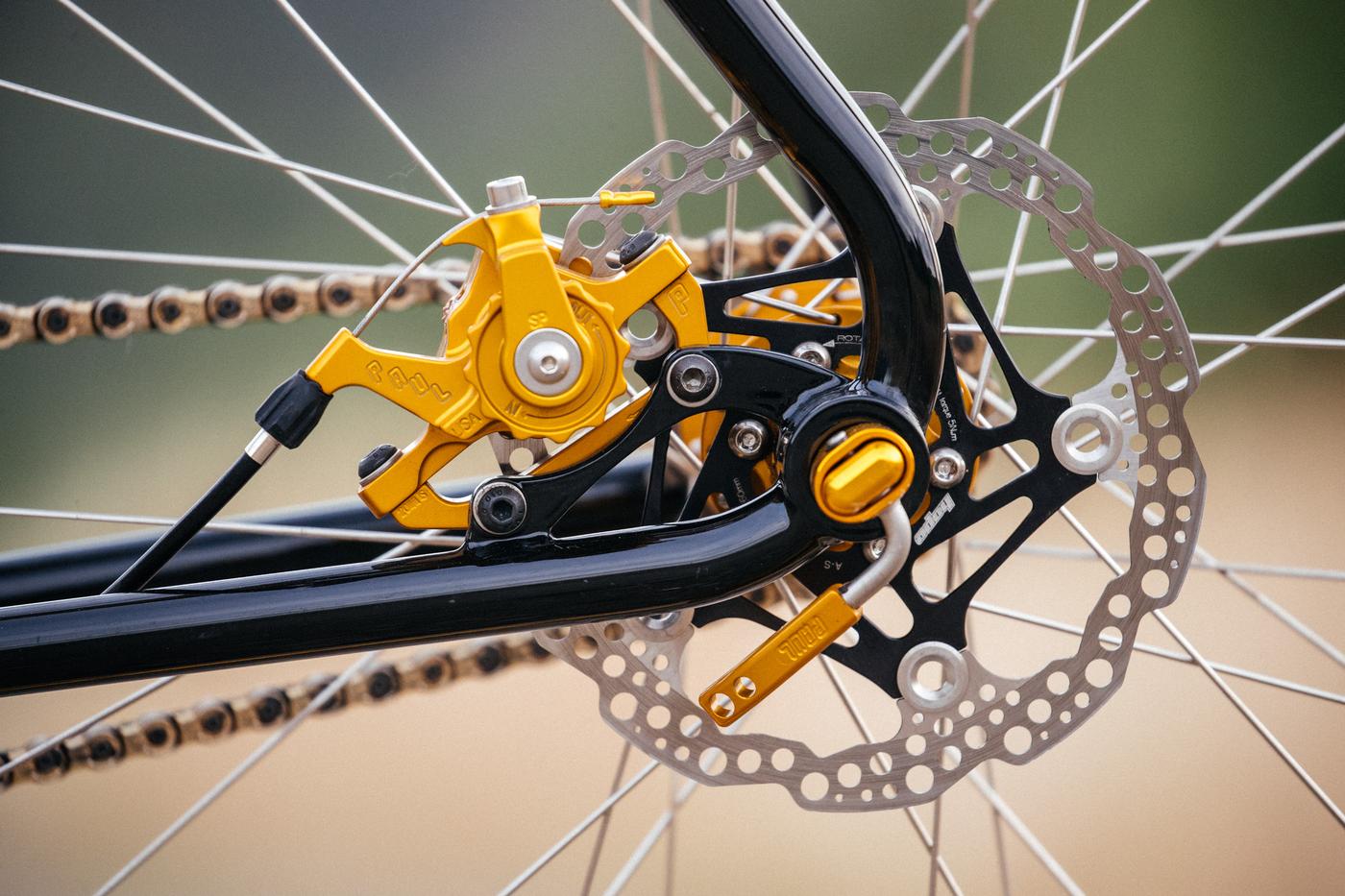 Meanwhile, I started piling up parts at PAUL, had them all mirror polished by Ted here in Chico, then anodized gold, also here in Chico. These goodies went from bare aluminum bars to finished ride-able components without ever leaving town. I tried to source as many other USA made parts as possible (Phil bottom bracket, White Industries freewheel and headset, Velocity rims, Wheelsmith spokes and nipples), and the only parts from overseas are the grips, tires, rotors, saddle, handlebars, and pedals. There isn’t a single Sram or Shimano part to be found. 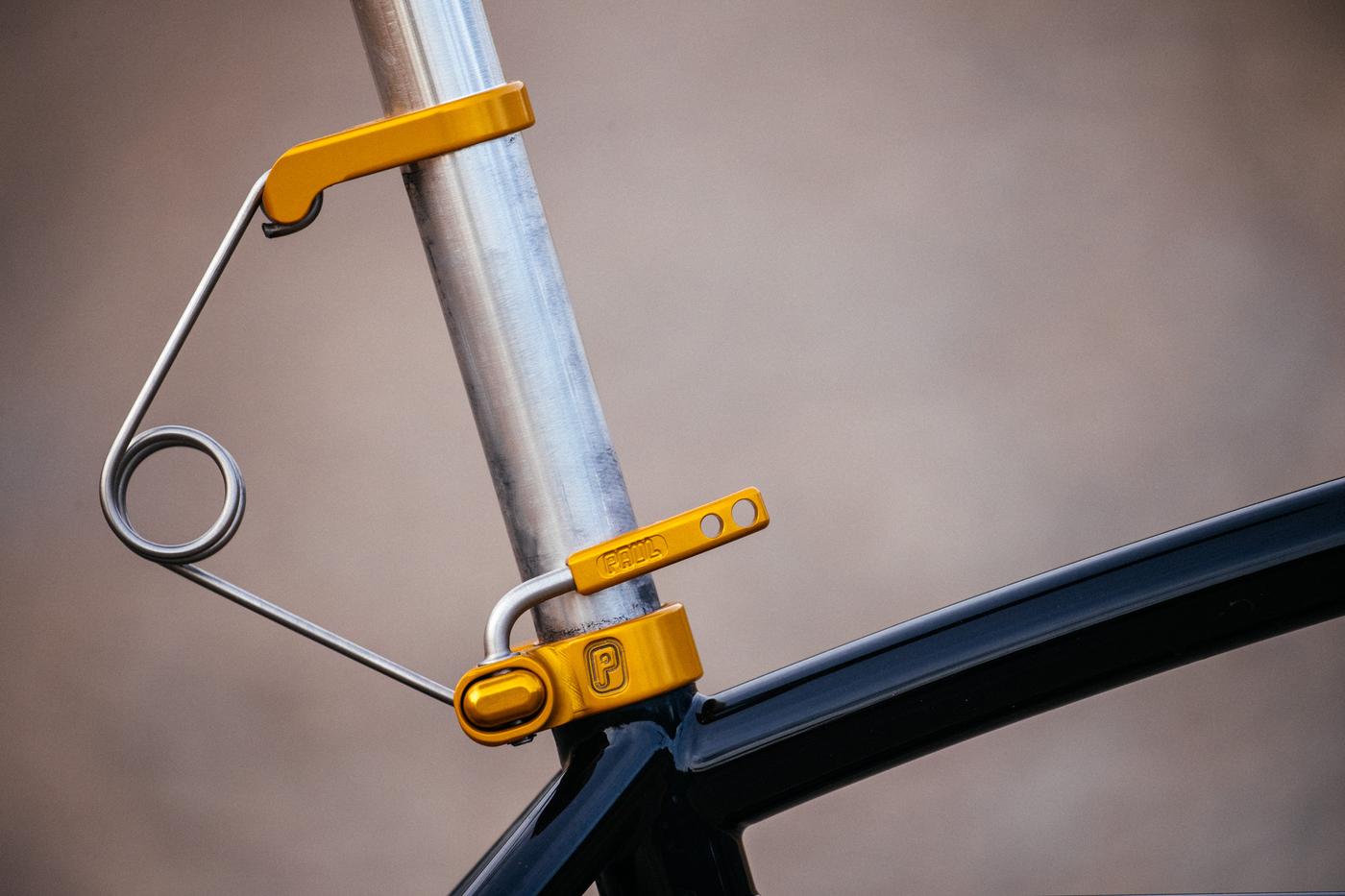 The bike built up like Legos, with everything fitting great, and was finished off by a “Hite-Rong™” that Falconer made me out of PAUL parts and a titanium custom bent spring. After an inaugural rip through Chico’s Upper Park, I was blown away by how agile and natural the bike handled, and realized I better take some pictures of it clean before it gets ridden the shit out of this summer. Chico rock gardens aren’t kind to bikes around here, so it won’t be long before this thing is dirty, scratched, and banged up. 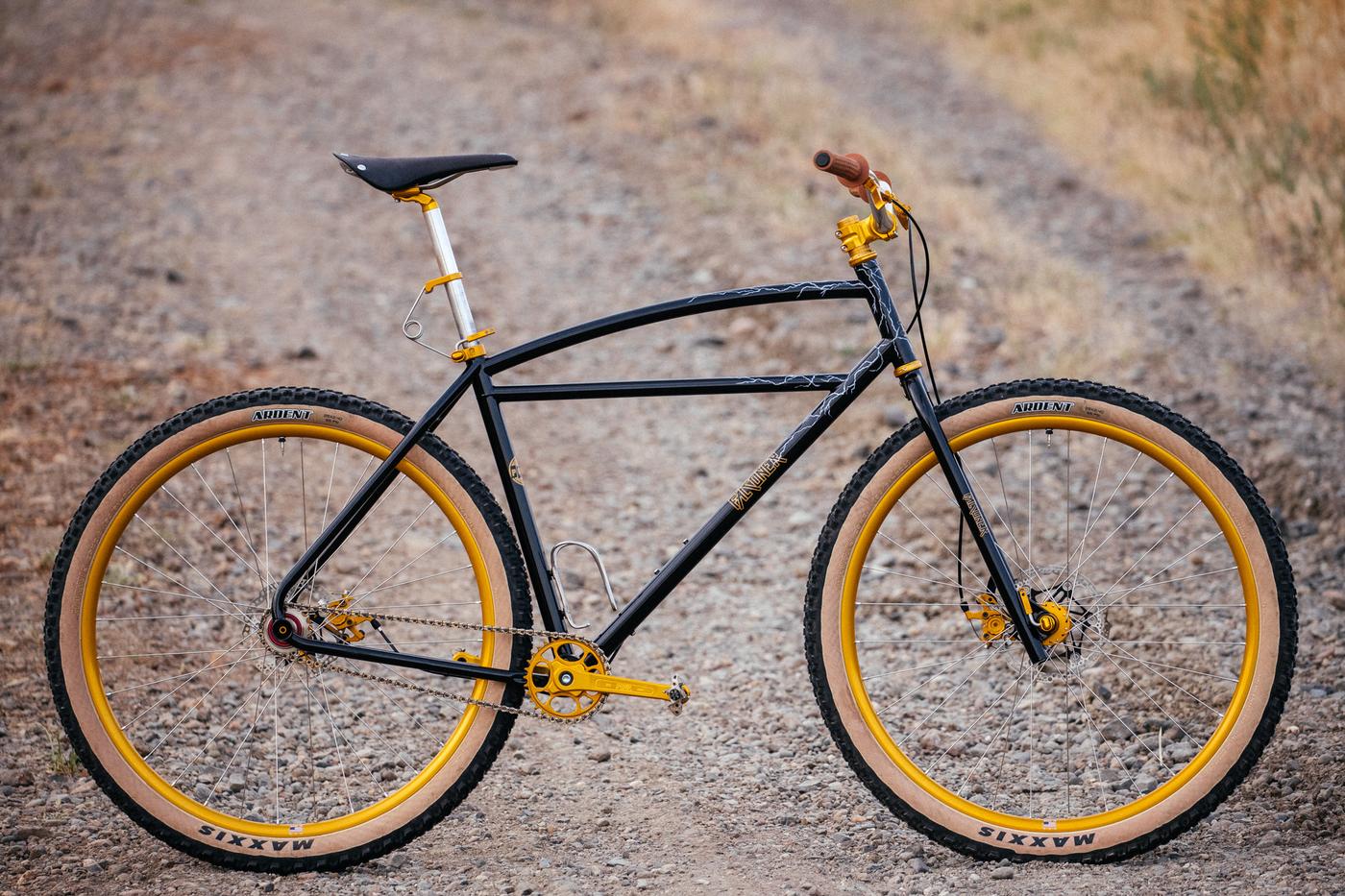 Big thanks to everybody who kicked into making what I would consider a real California Mountain Bike.