This story begins on an idyllic backroad in southern Montana.

After our incredible experience over the preceding few weeks in Montana, you might think that we’d take the advice. After all, the message was coming not only from the official Yellowstone website but from other bike travelers, people whose opinions we trusted. Stick to the Divide Route. Ride gravel. Avoid tourists. But, as I noted in that story, we didn’t set out strictly to ride the Divide or to ride gravel at all and we found that, especially in Montana, genuine human interaction made our experience of bike touring so rich. 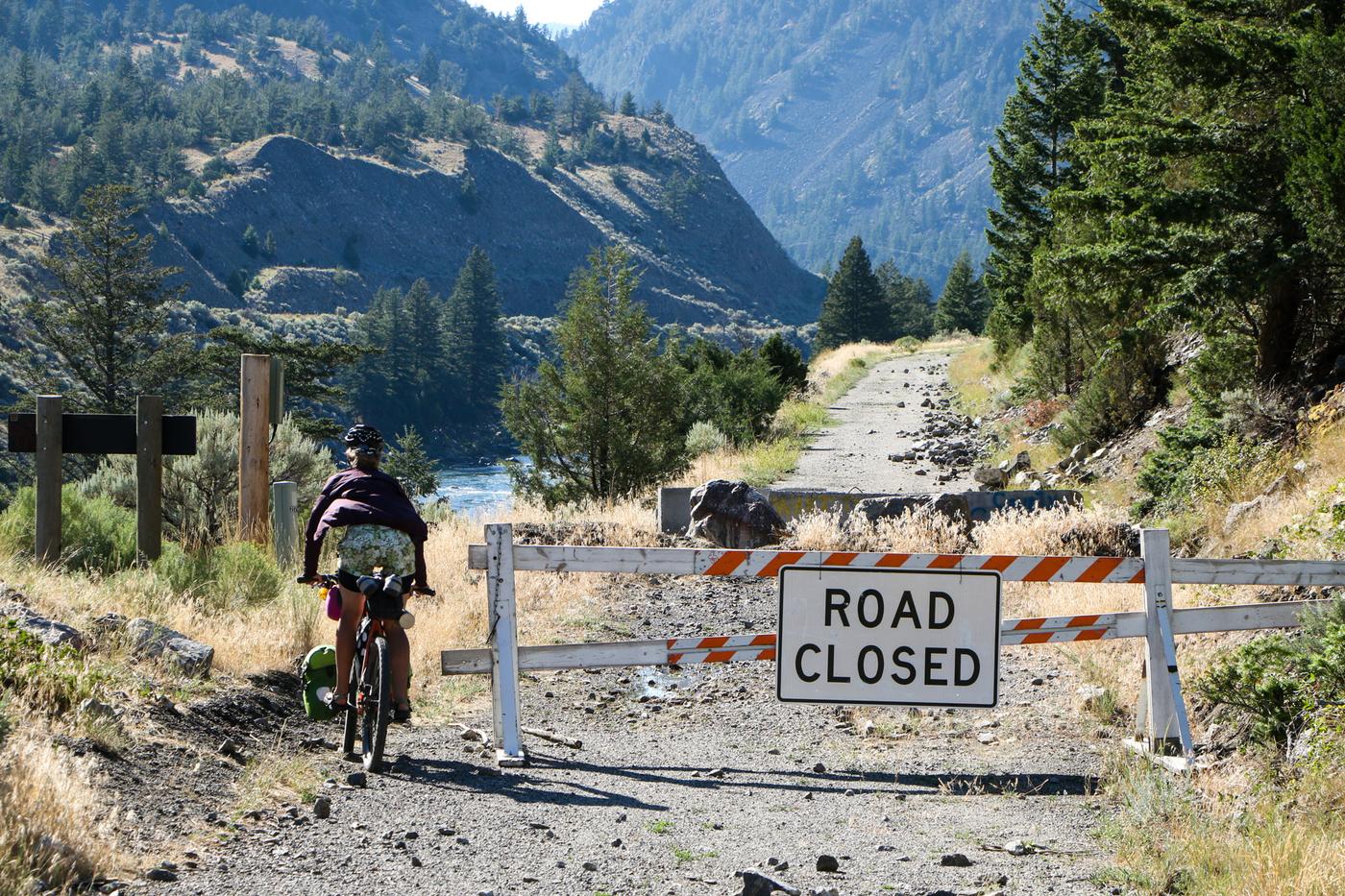 We went into Yellowstone really not knowing what to expect. Old Faithful and herds of bison, right? We knew there had to be more but the theme of this trip has been following our noses and locals’ recommendations. We didn’t do a ton of research because we figured simply going would be worth it. But in the national parks, this looked like it might be problematic.

At Yellowstone’s North Entrance gate, the ranger we bought our parks pass from didn’t even know if there was bike camping available at Mammoth. Considering we were looking at a thousand feet of climbing just to get to the visitor’s center, this was problematic. We celebrated passing the park boundary by swimming in the Gardner River, and made our way up – late in the day, as was the only option. From afar and now from in the park, we weren’t sure if our “follow your nose” approach to bike camping would work in the national parks. Dispersed camping isn’t really an option; backcountry camping requires permits, and that’s focused on areas where bikes aren’t allowed. We were still Canadians trying our best not to do the wrong thing in the land of the free. Our fallback option – which we were truly comfortable with – was to find some people with an RV who weren’t using their tent pad.

Arriving at Mammoth in the late afternoon, we were relieved to find extremely helpful volunteers at the parks-run campground – which turned out to be full, obviously, but had a “hiker biker” site that hadn’t yet been given away. We gladly paid five bucks apiece for a tent pad and a picnic table, drinkable water, flush toilets, and a bear bin all to ourselves.

We set up camp and headed up to Mammoth Hot Springs to check out the thermal features before sundown, and talked with some really helpful rangers at the visitor’s center. They couldn’t say for sure what the walk-in camping looked like at the privately-operated campgrounds, but they were certain that it existed and we’d be accommodated. 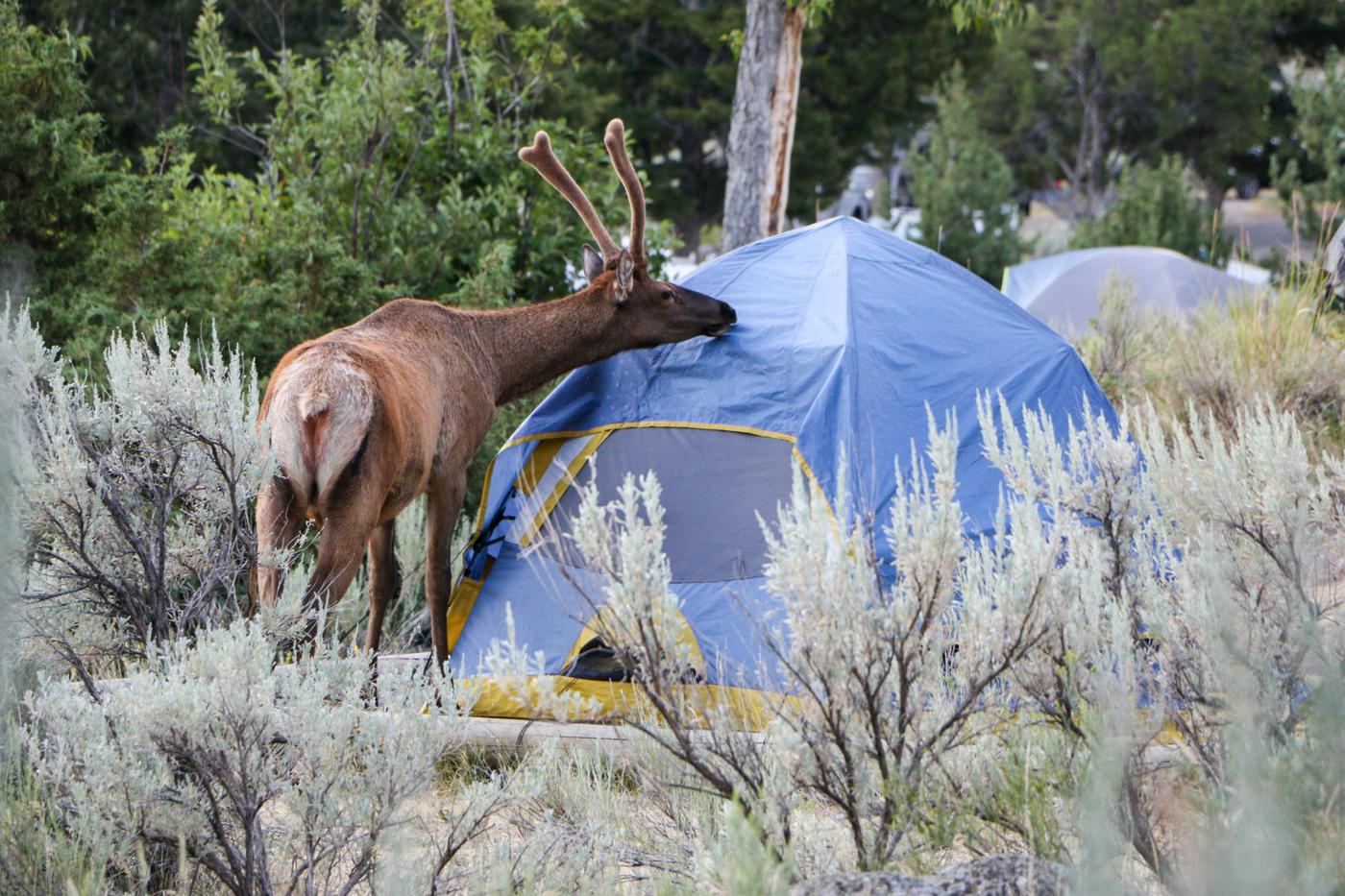 The entire modern Yellowstone experience is catered around car travel and RV camping. The Yellowstone website is nothing but cautionary about riding bikes in the park, and looking at it now, it’s obviously written to prevent families from expecting that they can ride around on the park roads. Touring cyclists are such a miniscule part of the park’s overall scope that they simply haven’t made the effort to make the information we need – specific road info, camping, and food – easily available.

Honestly, we had two negative experiences with vehicles, both of which within 5 miles of a park entrance gate. The first, within minutes of our entering the park, was an RV that turned into a pull-out a bit close for comfort. The second was a driver who was mad that I was taking the lane at 35 mph on the descent to the south exit in a 45 mph zone. Yes, there were loud pickup trucks and motorcycles, but those are everywhere, not just in parks – and the usual speed limit of 35 mph and actual enforcement by rangers really keeps traffic in check. 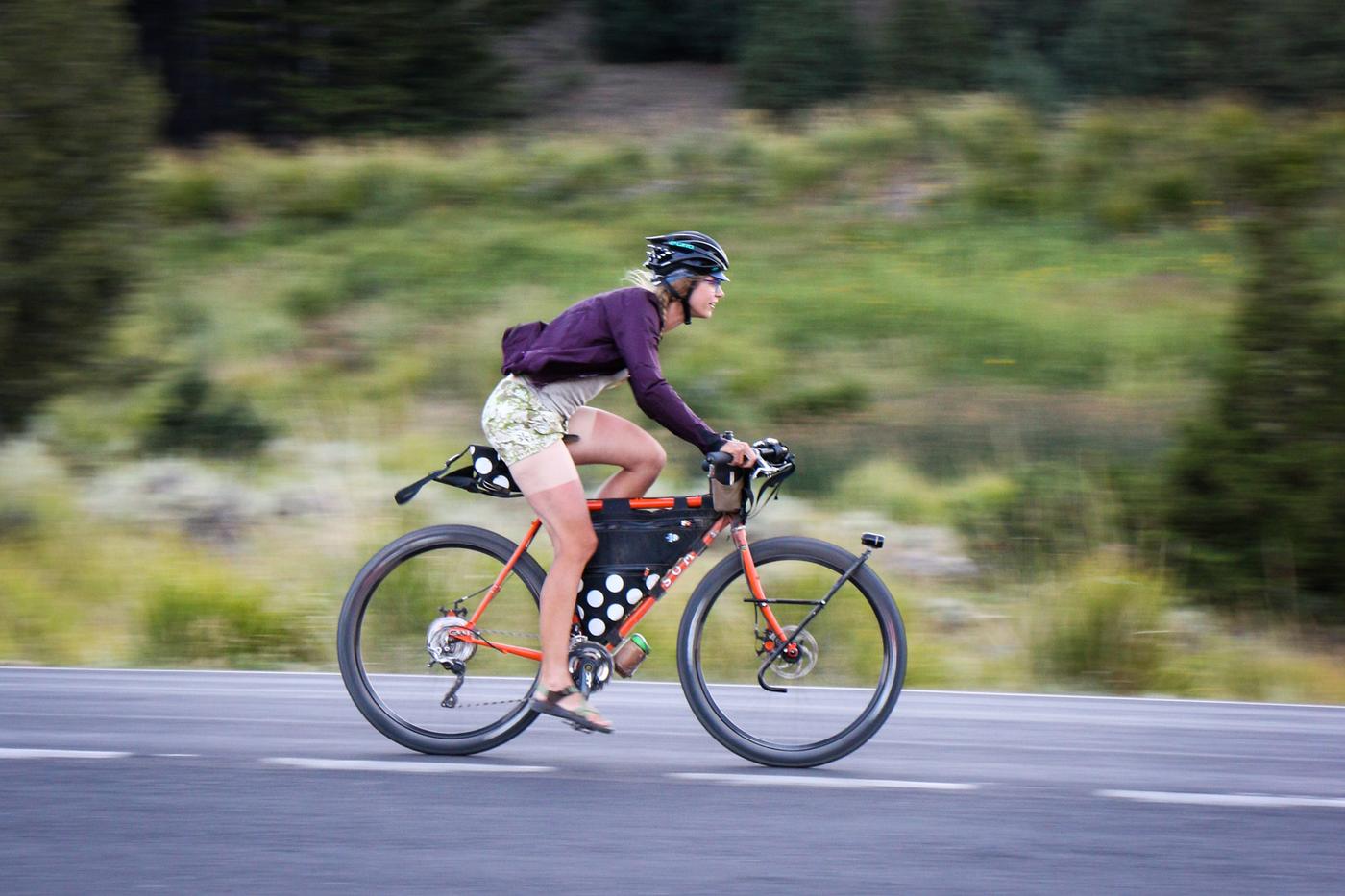 The rangers at the Mammoth visitor’s center were also super helpful in explaining the park’s two main loops and the distances between services. Yellowstone has been a national park since 1872 – well before cars became a thing. The distance between each main center is about 20 miles – apparently about how far a pack horse can travel in a day. Once we had this information, things really started to make sense.

With the rangers’ help we plotted out a longer route than we’d initially intended, looking at four nights in the park, going two-to-three pack horse legs each day. We would swing east the next day to climb the highest pass in the park at 8859 feet, en route to the Grand Canyon of the Yellowstone River. The road surfaces themselves were quite good. If you look at a map of Yellowstone you’ll see two loops within the park, and more of the roads on the lower loop have been improved with wider shoulders. Even on the yet-to-be-widended sections we rarely had a complaint. Yes, sometimes we had to ride the white line. But we have to do that on our own highways at home too. Drivers were very respectful, mostly waiting longer than we’d even think necessary for a safe place to pass.

We also noticed that a lot of people tow a car in with their RV, park the rig at the campground, and tour the park in the car. So during the day there aren’t as many RVs on the road as you might expect. Anywhere near an attraction (or an animal) and cars are creating their own traffic jam that you can ride right past, leading us to come up with our own Yellowstone bumper sticker: “If you had a bike, you’d be there by now.” 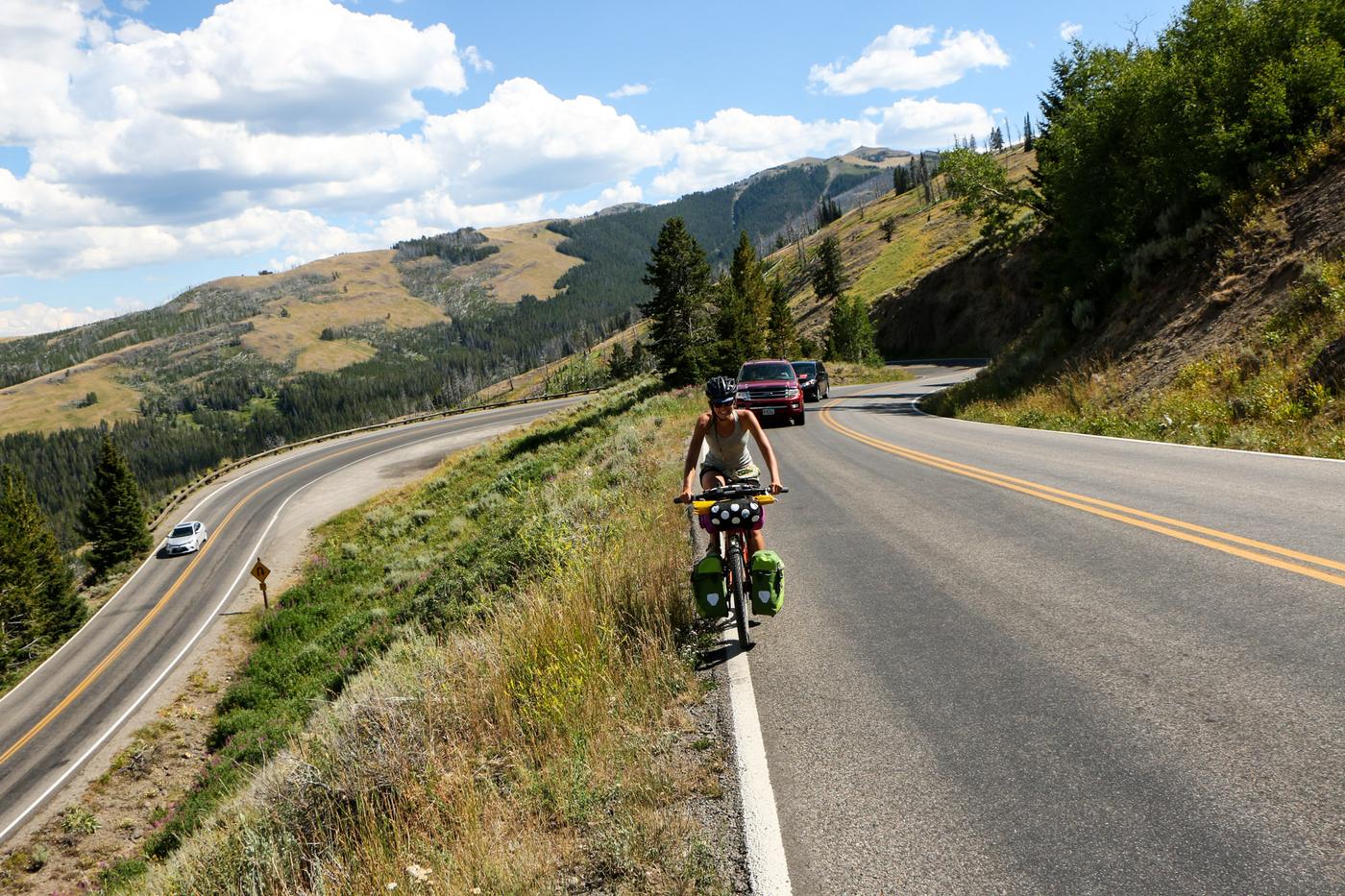 As it turns out, there were reasonably stocked grocery sections at most of the gift shops. I’m not talking a huge selection, but a passable level of food as long as you know how to cook. Milk, eggs, some vegetables, bread products, some canned stuff, and it wasn’t really more expensive than outside the park – $1.29 six-packs of eggs were as expensive as we saw. It’s possible we spent more money on ice cream than actual food, considering a number of families shared meals with us – though one traveler who was happy to hear our stories insisted on buying us ice cream, so maybe it’s a wash. Despite the lack of positive and bike-friendly information out there on the web, we left Yellowstone really happy we’d made the effort. There is truly something special about being in a national park. Sure, we had our challenges. Times when we didn’t have enough water, when the wind was bad, or when didn’t eat soon enough. There are tourist traps, but then sometimes you just want a double scoop of ice cream, right?

In Yellowstone we found incredible natural wonders, traveled roads that were in better shape than we’d been led to believe, and experienced the kindness of strangers every single day. I don’t care what they say. Go there, bring a positive attitude, see other travelers not as a nuisance but as an opportunity to connect, and ride straight past the traffic. The reward is worth it. 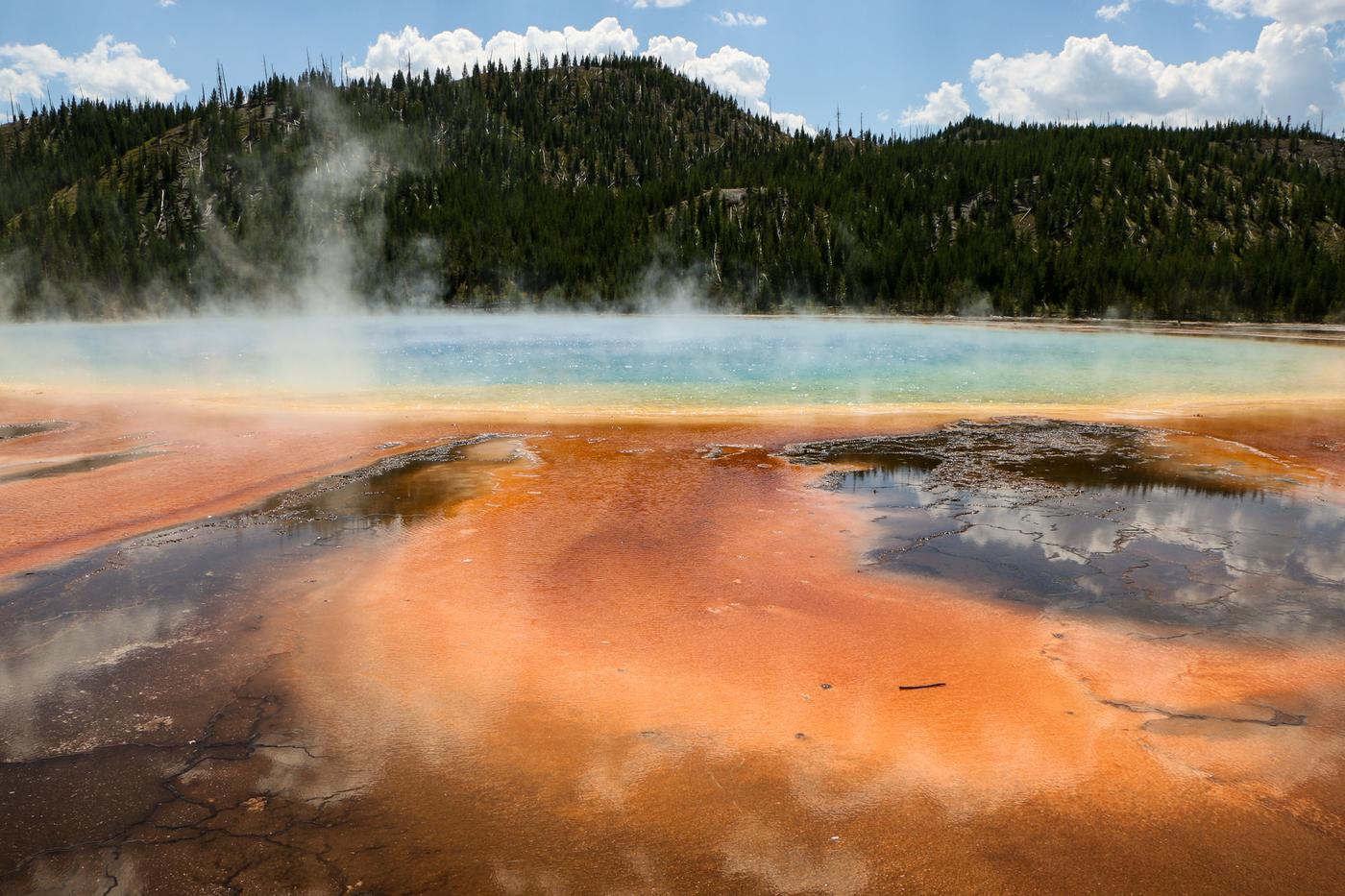 If you’re interested in hearing more about Morgan and Stephanie’s experience in Yellowstone, focusing on the practical lessons learned about routing and camping in the park, they are presenting at the first of Swift Industries’ 2017 Stoked Spoke Adventure Series in Seattle on January 18th.

Follow Morgan and Stephanie on Instagram at Found in the Mountains and see their routes on Strava.