Beasts of the Southern Blanca
Photos and words by Ryan Wilson

After finishing up the circuit around Huascarán, I landed in Huaraz. This is the capital of the Ancash region of Perú and the central hub for all activities related to the big snow and ice capped mountains that dominate the landscape. While Huaraz is not totally flooded with tourists, it is certainly the most visited town in the area, and a “gringo” barely gets a second look there when compared to the surrounding villages. Most importantly, Huaraz has pizza, so it makes for an obvious place to spend a few days taking it easy and swapping stories and routes with fellow cyclists and trekkers passing through the area. The inspiration for this “bike tour” is slightly odd due to the fact that the single thing that pushed me back toward South America the most was actually a trekking route. While riding takes up the majority of my days, I think it’s important break things up a bit so that the time on the bike stays fun. This was the perfect time to switch it up and head for a long walk through Cordillera Huayhuash after a month solid of riding.

The Huayhuash is a relatively compact range of dramatic peaks that lie just south of the Cordillera Blanca. While the bike route I planned out pushes through an amazing section of it (more on that soon), the majority of the best stuff in the Huayhuash is only really doable by foot, so I set off to tackle that with a group out of the hostel I was staying at. The trek lived up to the hype and then some. At some point I’ll put these photos up somewhere, but for now I’ve thrown in just a few. It really is a place that makes you wonder if you’ve seen the best Earth has to offer. After a week and a half with nine mind-blowing and lung-busting mountain passes over 15k feet (and a couple well above that), I went back to Huaraz with sore feet and prepped to ride off toward the southern tip of the Cordillera Blanca. After a few day rides up the local quebradas (Andean ravines) I was packed up and heading for the long road up toward Punta Huarapasca. This was really the first time where the temperamental Andean weather made its presence felt since I’ve been in Perú. A sprinkle of rain turns into hail, then snow, then maybe a minute of sun, then hail, and the sequence repeats.

With it totally socked-in as I reached the first pass and dropped into the valley that leads toward the second, I quickly realized that if I planned to get to the next village I would be summiting very late in the evening, and in some gnarly weather, so I decided to find the nearest suitable spot and setup camp. I’ve had some brushes with frostbite in the past, so firing up the stove and getting out of the wind sounded like a pretty damn good idea! 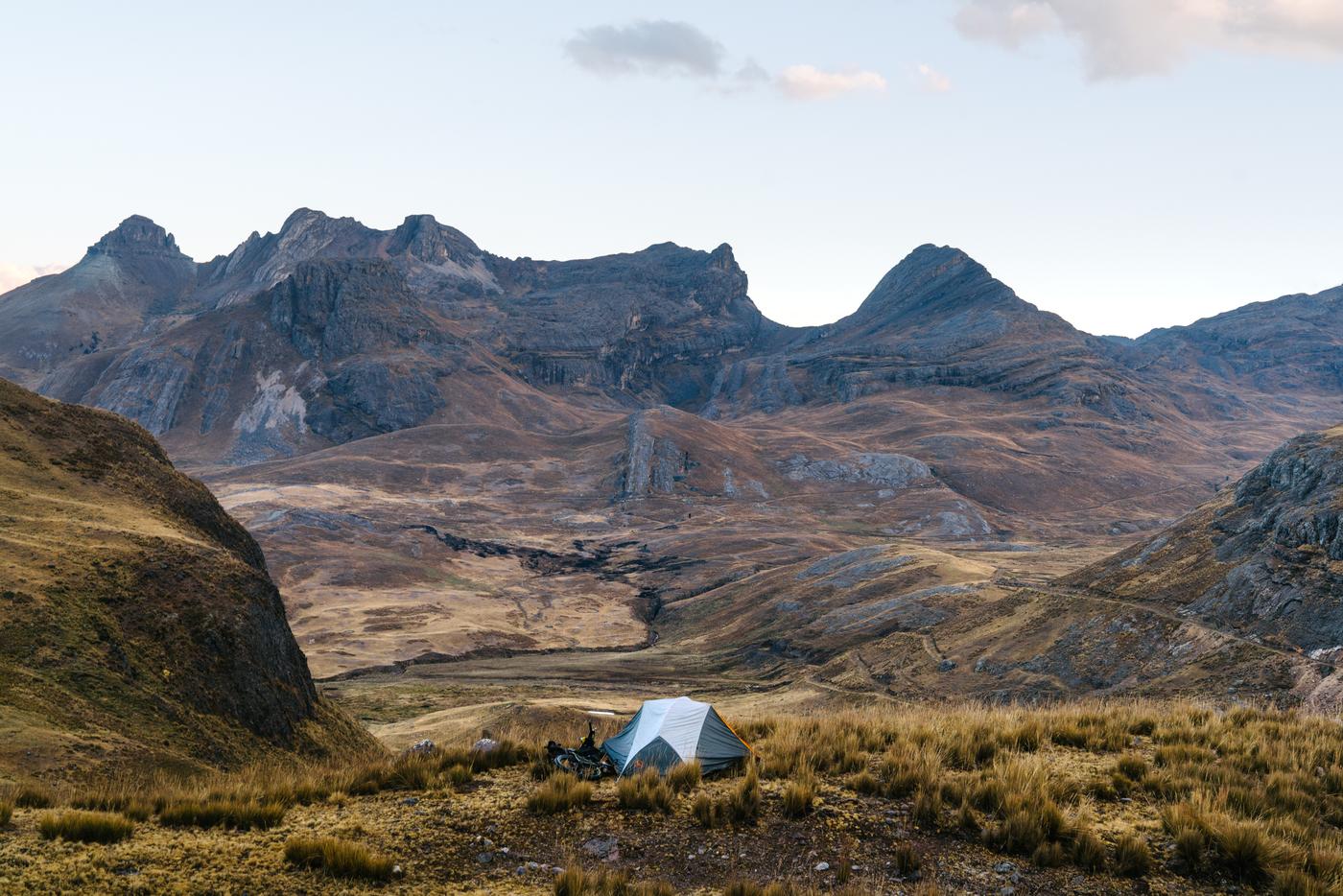 Camping in Peru is not exactly a common thing. You don’t really see locals out for a weekend camping excursion, and “campgrounds” are pretty much non-existent outside of a few designated spots along the most popular trekking routes. You also tend to see small settlements popping up just about anywhere. No matter how remote an area may seem, a shepherd will probably roam through that spot with their flock a couple time per day. After all, their hut is probably just over the hill, perched at 15k+ feet. If you don’t see it yet, their dog will probably let you know when you’re getting close by coming to “greet” you the only way a South American dog knows how. Still, I’ve had no problems finding a quiet spot to sleep, especially as I head out of the more densely populated foothills of Huascarán. Just be ready for a herd of sheep to plow through and wake you up in the morning! After a cold night (they’re all cold), I pushed over the next summit and found myself undulating along a ridge at 16k with wide open Andean expanse on both sides. This terrain was vastly different than the deep quebradas of the Central Cordillera Blanca where your view is almost always limited to one valley surrounded by towering glaciated peaks on all sides. Here, the rugged terrain seems to roll on infinitely.

A long descent down the mining roads of Yanashalla would lead me directly to the town of Huallanca, a good place to restock and get ready for some good old fashioned bike pushing back through the Huayhaush.