You’d be surprised how big of a tire you can squeeze into some of the older road bikes. My Merckx fits a plumb 28mm tire with ease and those Campagnolo NR mid-reach brakes can wrap their arms around, reaching the braking surface. Now what happened between the 1980’s and modern bike design is up to anyone to debate. Clearances got tighter, more aero, stiffer and a mentality that a smaller tire is faster took over the pro peloton. Like it always has, the trickle down effect hit store shelves and consumers did what they do best: consume. I know this is a bleak picture of tire clearance on road bikes, but it’s mostly unexaggerated. Mostly…

It seems that now with the whole “adventure / gravel grind / blah blah” trend, companies are designing bikes that fit big tires with the aid of disc brakes. Now we’ve got “all road, road plus” and various other terms to describe these machines, designed for riding off-road.

But what about the classic steel race bikes from back “in the day?”

Enter the All-City Mr. Pink. We’ve reviewed one before here on the site and while I stuck with a moderate 28mm tire, I could clearly see this bike was made for more rubber. With a caveat though. Putting bigger tires on the Mr. Pink means you’ve gotta go for a mid-reach brake, like the Paul Racer, or in this case, the Velo Orange Grand Cru long reach brakes. With those, you can fit a 30mm tire, with ease, making this one capable chubby road bike. Why would you want a 30mm tire on a road bike? Well, why not? Especially when a road ride, at least according to Mr. Kelley’s opinion, consists of all sorts of roads, including fire roads and even moderate singletrack. Kyle’s also not the easiest on his bikes, often hitting booters and kickers on a road bike, or skidding through corners, pinging rocks off his downtube. While you could technically do this on a 23mm tire, having some extra cushion helps.

When Kyle first got this Mr. Pink, he wanted to build it up as a classy, modern road bike. That means silver components. For that option, there’s only one group that fits the bill: Campagnolo Athena. The range is there for dirt riding, the parts look elegant, but the brakes just wouldn’t fit a 30mm tire. What happened to the NR era? Kidding aside, a simple swap of the brakes and this bike was ready to go. The build also includes: White Industries hubs laced to H+Son Archetype rims, matching pink Salsa skewers, a Spurcycle bell with a Thomson stem. He even topped it off with a Nitto post and Brooks C13 saddle to complete the look. This bike is fire. It’s molten lava and in California, we’re still in a drought, so bringing heat like this to state parks is dangerous!

Once it was all built up, I really wanted to shoot it. Mostly to show how versatile this bike is and because, well, it just looks damn fine. I didn’t just want to roll the bike around the block and fire off 30 photos or so. Kyle and I both decided we needed to shoot it on a bike ride. He had one route in mind: Dirt Mulholland to Topanga. From Golden Saddle and back it ends up being around 60 miles with 4,500′ of climbing. Sure, there’s a lot of urban riding mixed in, but that’s why this ride is so great: the contrast, or dichotomy of 10,000,000 people rushing to work mixed in with pristine, uncrowded dirt roads. You basically skirt around the city through the Santa Monica Mountains, while avoiding the rush-hour congestion. Technically, we’re still commuting to work, right?

Then, to top it off, you get spit out to the beach where you ride the bike path to Santa Monica and take Melrose avenue all the way back to Silver Lake.

“That moment when you’re riding through Beverly Hills, see a pink wall, stop to shoot a Mr Pink road bike when a model comments on how much she loves the bike and wants her photo taken with it. Oh and she’s not really smoking a cigarette – it was a prop in her photo shoot.”

Rides like this are totally doable on a ‘cross bike, or in Kyle’s case, one slick, chubby road bike that looks the part and even fits in on Melrose Ave. 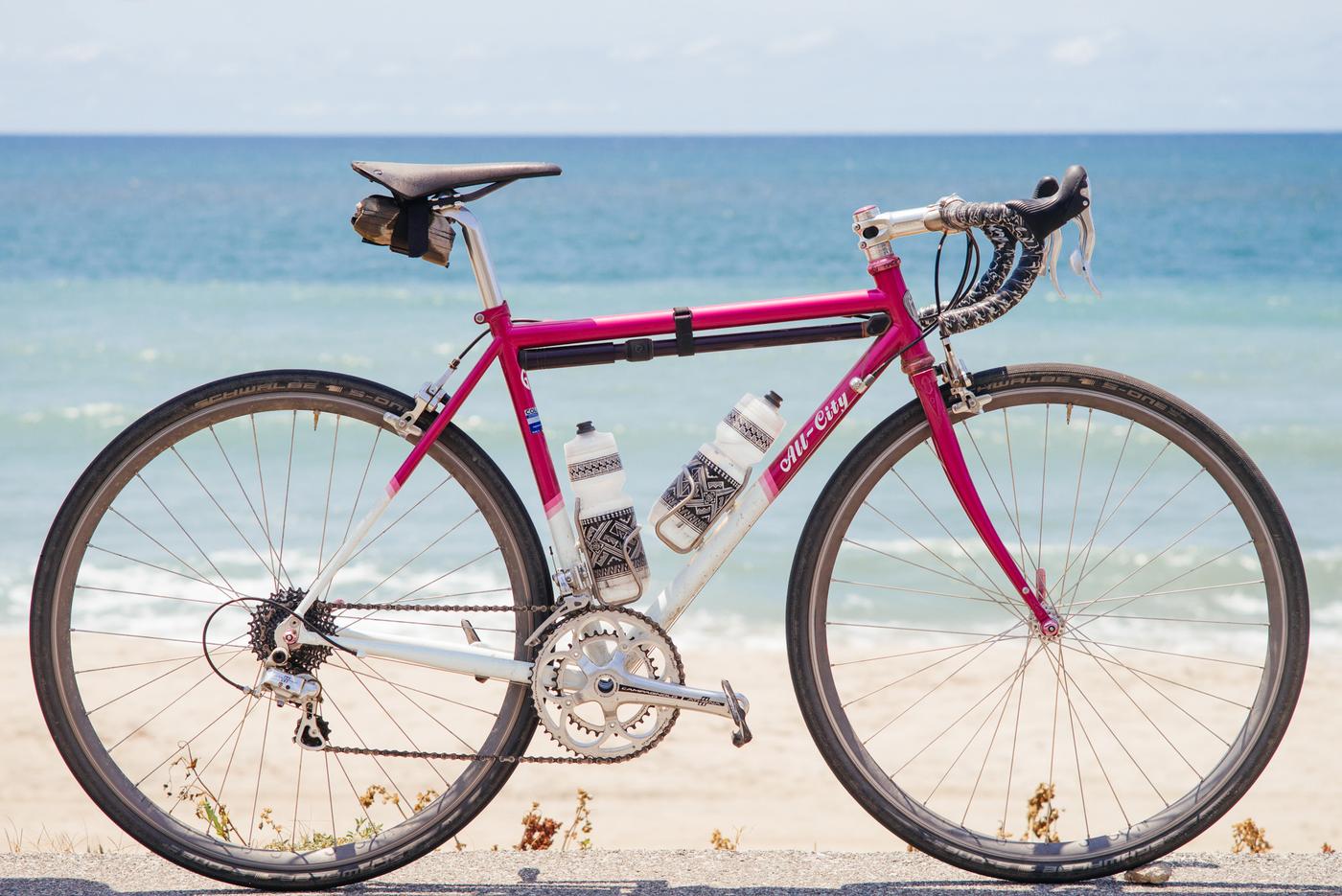 If you’re into this All-City Mr. Pink build, holler at your local dealer and be sure to spec Campagnolo Athena on it!