From the beginning All-City has been ahead of the curve. They are dedicated contributors to the current evolution of cycling, pushing their own boundaries and those of the industry around them, making bikes that are actually fun to ride. They began making high quality, affordable track cranks and hubs when there was nothing but Campagnolo and Sugino to choose from. Next they introduced the world to the 32c production road “race” bike. After that, they took the cyclocross world by storm and produced a NAHBS quality production single speed cyclocross bike. And during the vintage MTB craze of 2014-2015 they made a modern day, old-timey MTB equally equipped for ripping down the trails as through the streets to the bar. 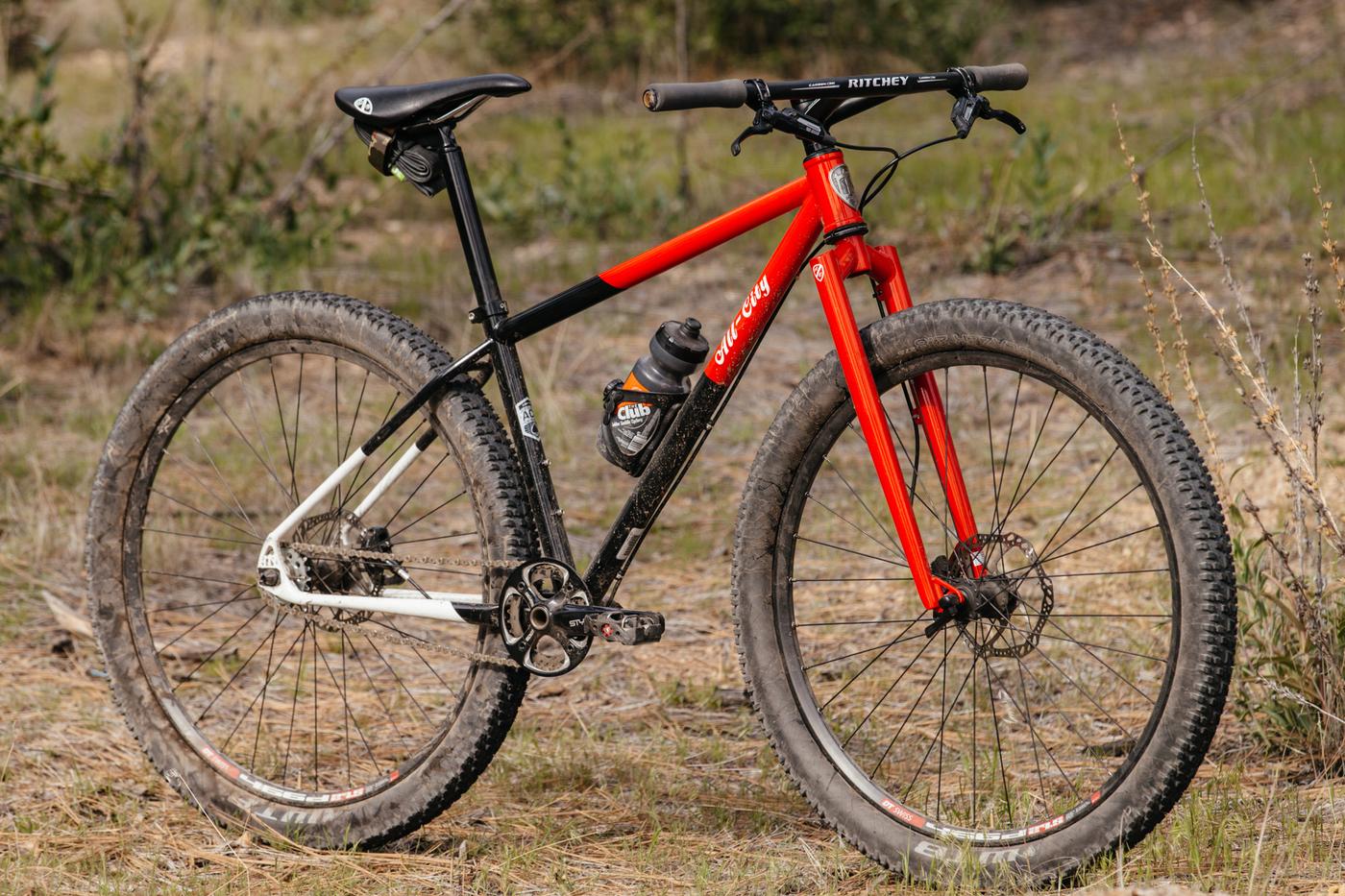 When the people at All-City go about designing a bike they draw inspiration from their home, the people there and the kind of riding they do. The result translates to what I think is a versatile and impressive bikeography. Their latest release is no exception. The Log Lady is a single speed mountain bike with steep angles, meant to get you around, in between and above anything the trail throws your way. The MTB world struggles to understand bike’s like this today because they have loosened their interpretation of what “aggressive” means, often calling what I see as pretty slack angles aggressive. The Log Lady is not a point-shoot-let the slack head tube and suspension do the rest kind of ride, that’s for sure. This bike reminds us that aggressive actually means agile, steep angles and maneuverability. I was excited to try one out because I haven’t had a single speed mountain bike in ages. 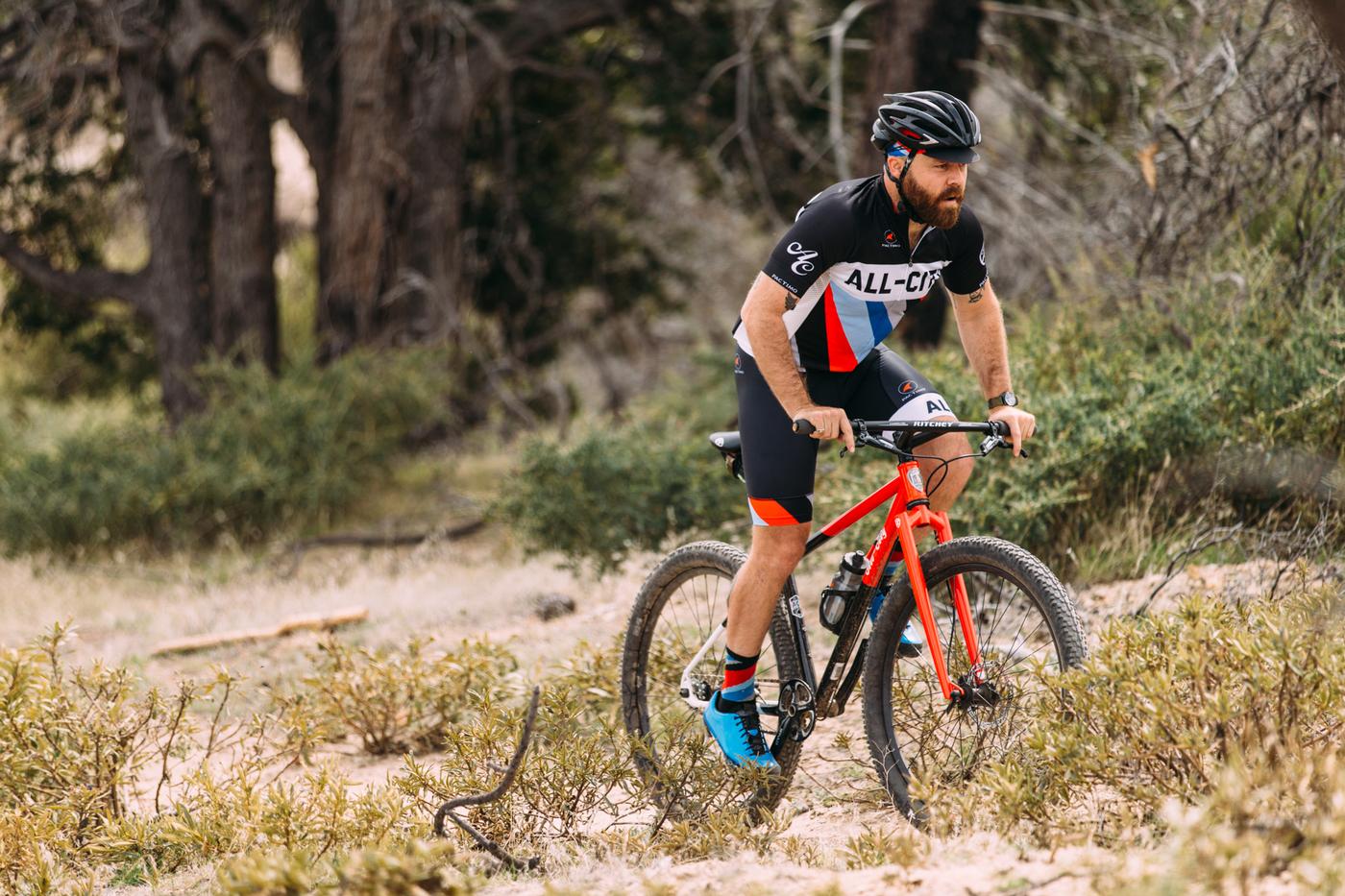 It took a little convincing to get Jeff from All-City to send one out to California for me to test but he eventually located one in my size and I couldn’t wait to get the party rolling!
It took a few changes to get the stock Log Lady ready for Southern California riding. The first, and by far most important thing, was to get it geared for climbing in these parts so I swapped the stock cog to a 20 tooth. I could have gone even bigger, but I had already given the 22 tooth to John for his baller build Log Lady, which you might have seen featured earlier on the Radavist. The second adjustment I made was the handlebars. The ones the Log Lady comes with are just too narrow to manhandle your way up the steep, sandy single track here. I decided to put on some of the Ritchey Carbon Bullmoose bars instead. Finally, because I got the rigid version of the Log Lady I threw some WTB 2.8 tires on it for a little bit of cushion for the pushin’. After these changes the bike was ready to party and party it did! Mountain biking in Southern California is something truly special. The climbs are steep and long, either on loose two-track or tractionless single track. I found that the Log Lady’s geometry allowed it to climb very well, keeping me on top of the bike and not behind it. It had solid maneuverability around the switchbacks, but struggled when powering up steps and other rocky features on the trail. The front would sometimes need a little bit of help to roll over something. The descending is fast here and cornering can get a little sideways, but the rigid fork and the bike’s ability to house a 2.8 meant I never felt out of control. That being said, I still would have liked a front through-axle for added stiffness. The short chainstays allowed me to really throw the bike around bunny hopping logs, doing high speed manuals, jumps, slow speed wheelies, etc. My time with this bike was short, but I can say with confidence that I’d love to have it in my stable. Sure, I’d change a few things on the stock build, but it’s pretty damn close to perfection. Closer than any other production single speed mountain bike I’ve seen.

Hopefully one day I’ll get to rip one of these around the homeland! Brown County Trip anyone?